We can expect the Dengue Action Response Team (DART) to carry out an inspection of Coquette Point next week.

Incidental, Coquette Point has been without Telstra land-line for one month. The repairs were completed on Wednesday and we have land-line again. This outage caused extreme hardship to many elderly people at Coquette Point who have never owned a mobile phone. It seems incredulous in this day and age that it took one month for Telstra to fix the fault. 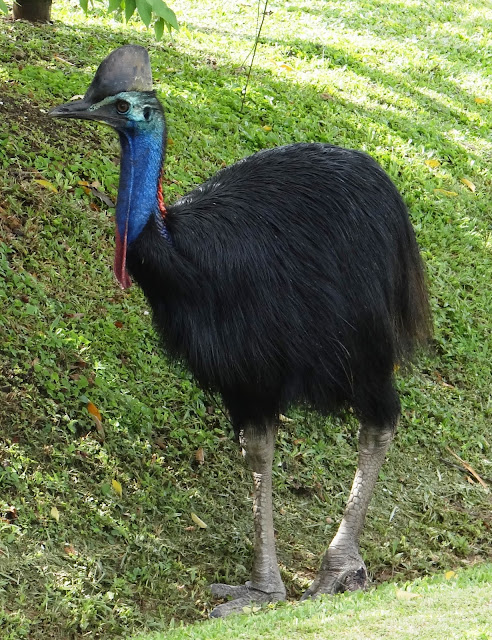 The young cassowary 'Rosie' has an injured foot. This week National Park's Rangers came out to Coquette Point three times to try to capture her, however, they were not successful.
Fortunately 'Rosie's' foot is getting better and her limp is still pronounced but not severe.  She is searching for food and other than the injured foot she appears to be in good condition.

Capturing cassowaries is always problematic as often the stress of the capture and transportation results in the death of the bird.

The most important thing to do now is to monitor 'Rosies' condition and appraise the progress of her recovery.

'Rosie' is 'Snouts' chick from November 2010. 'Snout' did not breed in 2011 as he stayed with 'Rosie'. In 2012 'Snout' lost his chicks in an attack, we do not know what happened but believe, from the marks he carried after the attack, it was dogs. 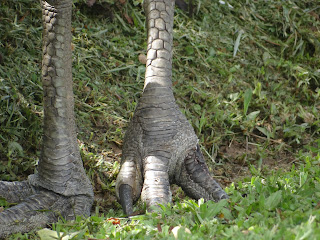 A close look at Rosie's foot shows torn and infected flesh on the outer left side foot. The injury is consistent with a dog attack. However, if it was a dog it would have no doubt received some injury itself. Cassowaries can put the talons on their feet to good use and are more than an equal for a one or two dogs, a pack of dogs of course, will bring a cassowary down. 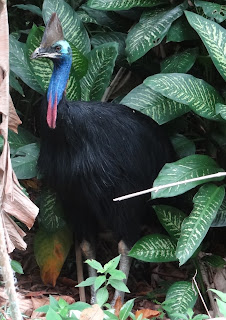 Snout has given up stalking matriarch cassowary'Jessie' and when she is around he disappears into the undergrowth and lays low. Meanwhile, 'Jessie' is covering a large area of her range with sightings of her from Ninds Creek bridge to the mangroves on the ocean front and all in one day a distance of about five kilometres.

For over six months there has been no sign of the other Coquette Point matriarch cassowaries, 'Peggy' or 'China girl'.

'Brown Cone' was seen crossing the road near Ninds Creek this
week and he still has one chick with him. The chick is quite large now and has lost its stripes. 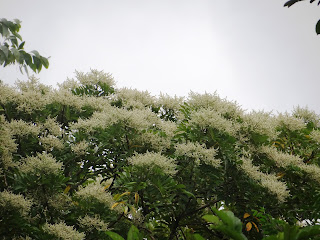 Only two chicks have survived at Coquette Point from the 2012 breeding season. One chick with 'Brown Cone' and the other with 'Little Dad'.

The rainforest tree Sumac, Rhus taitensis, is in flower throughout the Wet Tropics. This year's flowering is the most spectacular I have ever seen. The rainforest appears to be covered in snow as the sumac holds its flowers on its uppermost branches. 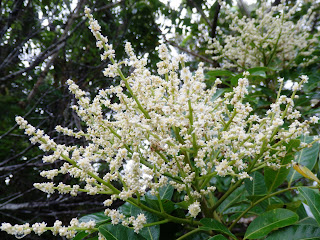 The flowers look as if they have been carved from ivory and when the rain falls droplets of waster are held in suspension on the petals and they glisten in the sunlight.

Sumac is a small tree with a spreading canopy, it will reach a height of five metres and appears to withstand strong winds. New growth is flushed red on feathery shoots. 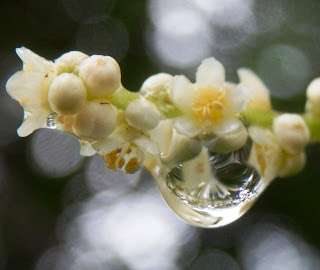 A raindrop encases the petals of a sumac blossom. 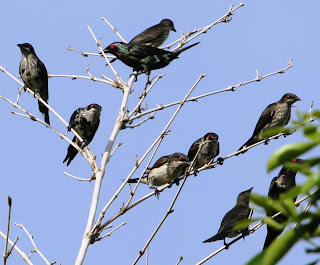 The skies over Coquette Point have suddenly gone quiet. The Metallic starling have departed for  their return journey to Papua New Guinea. The large white-apple trees, containing hundreds of metallic starling nest, near the boat ramp at The Coconuts are quiet again.

Before their departure I observed that 'Spotty' and his siblings were fully grown but were still in juvenile plumage.

A new bird call is in the skies over Coquette Point as the Rainbow Bee Eaters returned to north Queensland last week. 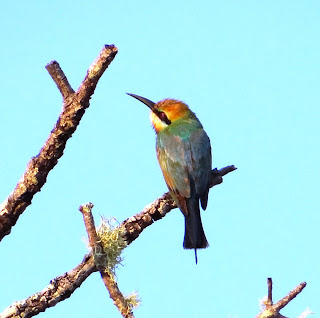 The Rainbow bee-eaters scope the sky for insects. The flock is on the wing for hours on end and will consume millions of insects every day.

Now the metallic starlings have left for their migratory journey they immediately step in to fill the gap. One can only imagine the imbalance that would be created if these birds did not control the insect population. Certainly it would make it difficult for horticulture. 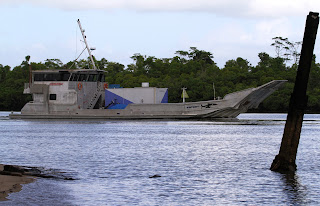 The owners of the Dunk Island Resort have purchased a barge to service the Island.
Many people at Mission Beach believe the prosperity of their village is linked to the Dunk Island Resort. The barge will be a game changer for the recovery of the resort and it demonstrates a big commitment on behalf of the owners  as the barge will be a very costly item to maintain and crew.
The photo shows the barge rounding Coquette Point after a short stay in the Johnstone River. 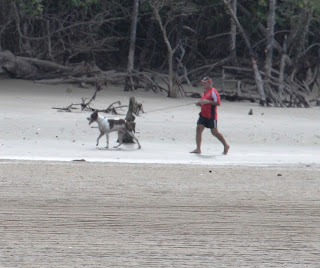 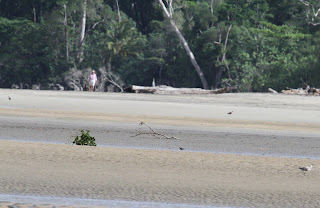 World Heritage areas have the same legal status as National Parks, however, without signage people do not realise what they are doing. When I quietly explain about the migratory bird's breeding and feeding grounds I am generally abused.


It really is unacceptable when people who are employed to do a job to protect the World Heritage values of areas like Coquette Point, do not. My only option now is to put in an official complaint to UNESCO and request them to investigate. 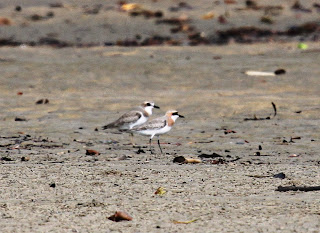 One good thing this time is both dog owners had their dogs on a leash. This did not stop the shorebirds from scurrying away from them and their feeding grounds each time they passed half an hour apart. 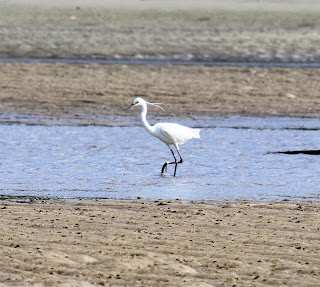 The lesser egrets were displaying their nuptial plumes. 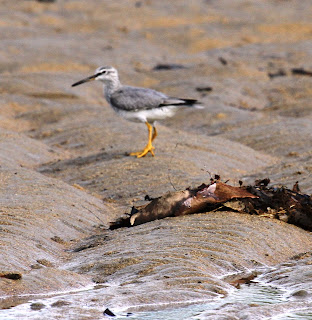 Grey-tailed tattlers were busy probing the sand and mud for small crustacean. 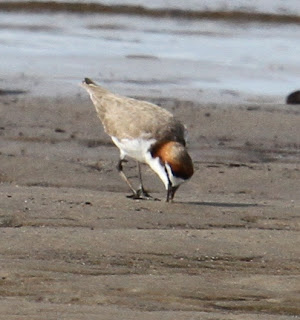 Red-capped dotterals scurried along the sand flats picking up insects and probing the sand for a feed. 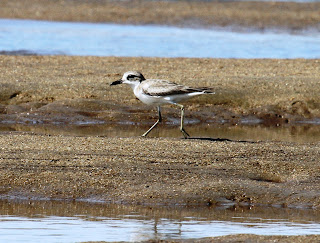 We saw around ten grey plovers feeding singly in puddles left from the outgoing tide. Soon these little migratory birds will leave for their long journey to the Northern Hemisphere where they breed. They will need all the strength they can gather during the stay over at Coquette Point to sustain their endurance for their long flight. 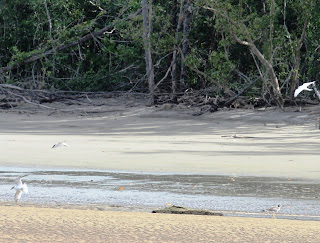 About 15 gull-billed terns were fishing in the ponds left by the out-going tide. They hovered seemingly motionless over the water as they searched for fish. 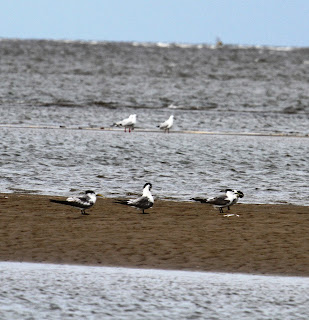 Four silver-gulls were fishing on the outer sand-bar while I counted over 150 crested terns on inside sand-bars. 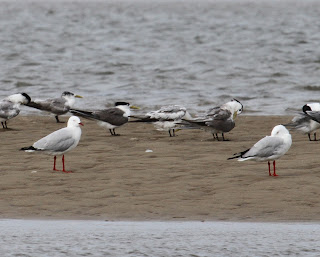 While on other sand-bars silver gulls fished with the crested terns. 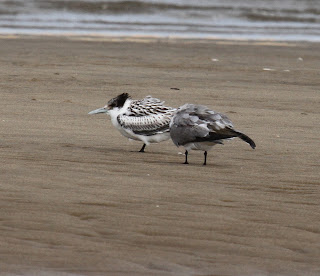 Over 50 of the crested terns were juveniles and it was beautiful to watch the parent birds tending to the fledglings.

An adult crested terns carries a fish to his chick while another chick waits to be fed. 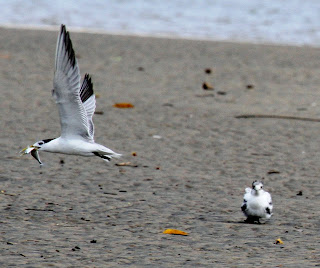 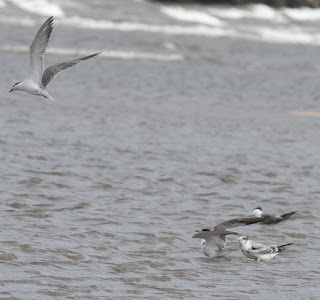 We watched the crested terns teach the chicks how to fish.


As we returned we saw the gull-billed terns feeding amongst the mangrove roots. 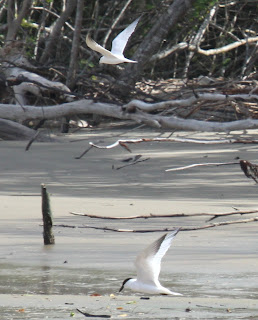 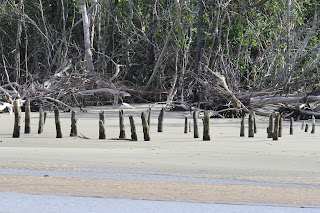 The loss of mangroves from the Coquette Point estuary continues. The stumps of dead mangroves stand like grave-makers in the sand. 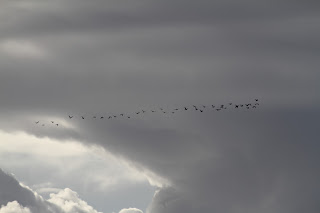 The Pigeons soared high and turned north into the dark clouds of the gathering monsoon.

Travel safely beautiful birds and we will see you again in spring. 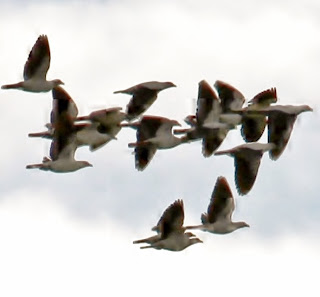 Cheers for this week and enjoy the Easter break.
Yvonne.