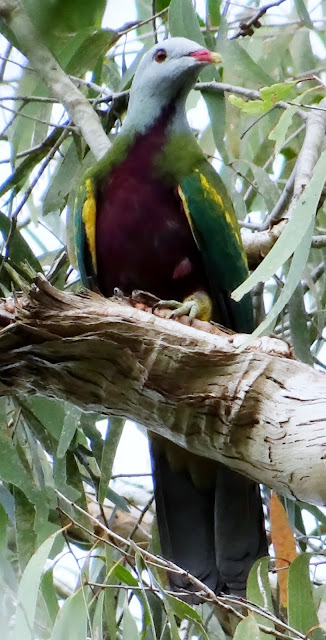 This week the call of Wompoo the fruit dove has been echoing across the rain forest at Coquette Point. Deep in my little bit of rainforest these large, brightly coloured doves are feasting on the ripe fruits of the white cedar, Melia axedarach and the fruits of the strangler fig, Ficus watkinsiana.

Between bouts of feasting one Wompoo came out of the forest and rested in a nearby melaleuca tree. I found her making clucking noises as she looked around and through the tree. Amazingly she allowed me to get quite close and take a series of photos as she apparently sat digesting a meal. How privileged I felt.


While the fig fruits Wompoo eats are edible for humans  the white cedar fruits are poisonous not only to humans but horses and cattle as well.

Aboriginal people made a cream from the fruits of the white cedar in order to treat skin ailments.

Recently horticulturists have successfully distilled the oils from the white cedar for use as an insecticide. 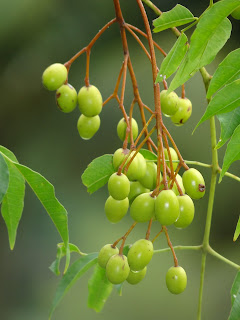 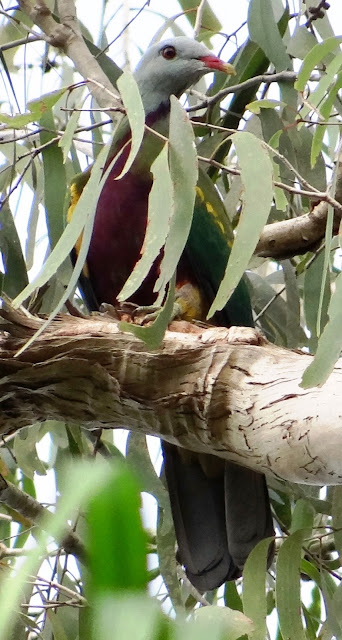 While I was watching Wompoo I heard
happy chipping sounds. Two little birds were busily hunting for insects which had been attracted to the nectar oozing from the flowers of the umbrella tree.

It was difficult to see them as they moved quickly in and under the shadows of the leaves. I soon realised it was a bird I had not seen before at Coquette Point. It was not until the next day and with the help of my twitchy friend Russell I was able to identify the bird as Macleay's honeyeater and I was surprised as these honeyeaters were catching insects!

The next afternoon they were at the umbrella flowers again but impossible to photograph in the overcast and showery weather.

The Macleay's honeyeater is apparently common and often seen in Cairns gardens. 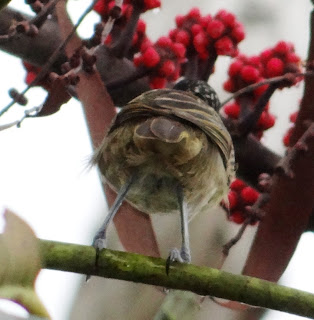 The yellow streaked upper breast are distinctive on this little bird as well as its prominent black cap. The belly appeared quite yellow contrasting with the red eye patch. A truly beautiful little bird.

What is unusual for this honeyeater is that its diet consists mostly of insects, about 70%. While 20% is nectar and 10% fruit.

Apparently the flowers of the umbrella tree are its particular favourite hunting ground and of course that is where I found this pair.

Keep a look out in your garden for this busy little bird. 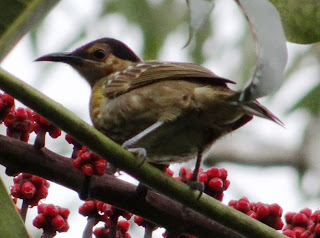 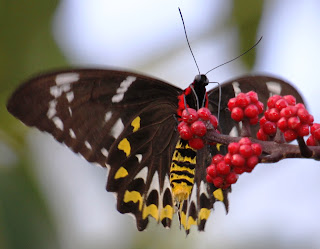 The female Cairns birdwing was also feasting on the nectar of the umbrella fruits. As she placed her proboscis into the fruits she appeared to stand in midair her wings fluttering rapidly. 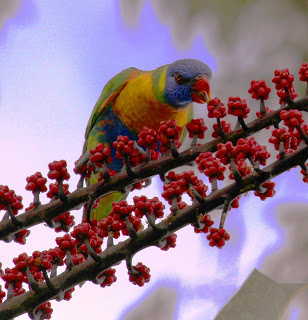 It was not long before Rainbow Lorikeets also found the rich nectar spilling out from the fruits of the umberalla tree. As they fed on the fruits many red berries fell  offering another feast to ground dwelling creatures. 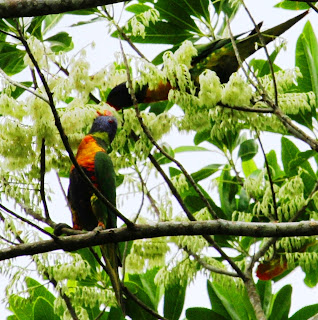 Rainbow lorikeets are noisely delighted the Quandong tree Elaeocarpus eumundi is covered in nectar laden, frilly, cream blossom. When they finish feasting on umbrella nectar they fly to the Quandong jostling over the blossoms and pollinating the flowers as they do so.

The Quandong tree has a peculiar habit of producing deep red leaves amongst the dense foliage. It is surprising how these leaves help to  create a camouflage for the Rainbow lorikeets.

In a few months the flowers will be followed by bright blue fruits. These fruits are a favourite of cassowaries and fruit pigeons like Wompoo.

Quandong trees grow up to 30m tall and the branches are brittle, as such this tree is unsuitable for ornamental plantings in cyclone areas. This is unfortunate as the tree certainly attracts birds and butterflies. As I was watching the lorikeets feed and squabble in the Quandong one bird flew down and straight past me. Luckily I had the camera ready to catch it in flight. Click on the photo to enlarge you will see it appears to be flying out of the page. 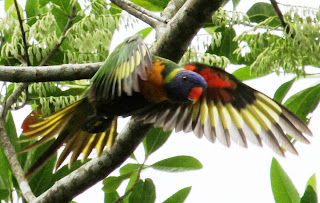 While we expect to see peaceful doves foraging in cleared areas, particularly along roadsides, I was surprised to find  one dove pretending to be a shorebird. It was savaging in the mangrove roots and along the tide line on the beach and finding berries to eat. From time to time it pushed its beak into the sand to find more tasty bits! 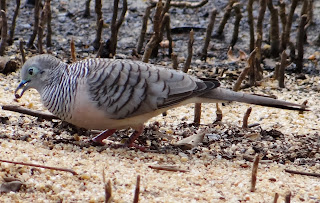 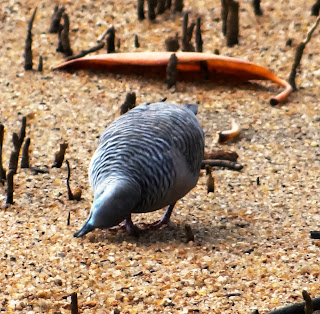 We experienced a severe tropical storm on Wednesday.
and afterwards the Torres Imperial Pigeon found a branch to dry off . 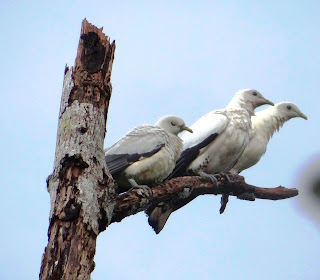 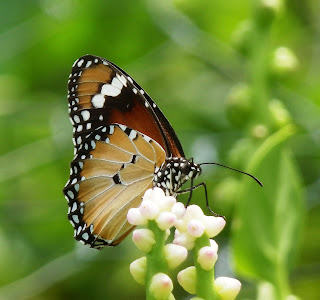 I found this Swamp Tiger feeding on the flowers of Ceylon spinach in my vegetable garden.
Fuscous swallowtail on citrus. 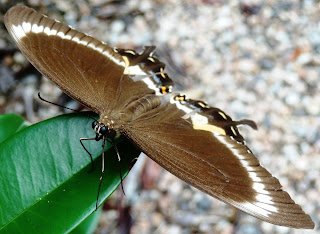 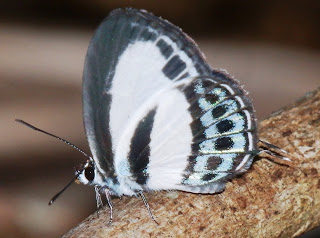 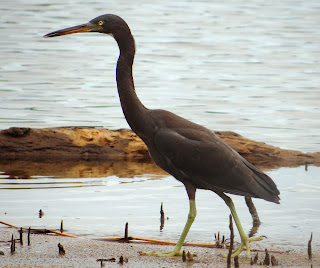 Every day Grey Reef Heron searches for prawns and small fish within the Johnstone River estuary. I was watching him feeding at the mangrove edge when he walked past only a few feet in front of me and he went to the rocks to fish. I had to pull the zoom back quickly to fit him in the frame. He seemed totally oblivious to my presence.
He found some prawns washed into a pool in the rocks and 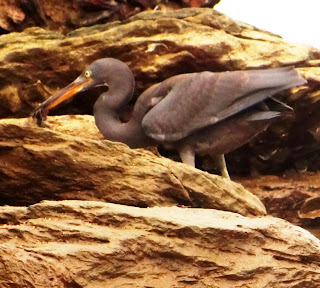 along with a big lump of seaweed, he ate the lot.
King tides again this week 3.01 on Thursday morning and this time the tide was helped along with  strong winds of 25 to 30 knots.  Small waves washed onto the beach inside the estuary and it was interesting to watch the interaction of the waves with the driftwood and detritus on the beach. The litter appeared to break the wave and stop them from scouring out the beach. Instead the wave dropped sand and as a result there is now an accretion of sand on the beach. Nature has a  purpose for everything, even beach debris. 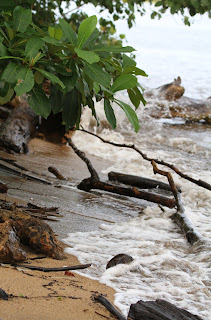 We can expect more strong winds next week with a low crossing the gulf and entering the Coral Sea. It should be abeam of the Cassowary Coast by Thursday next week. Hopefully, it will keep moving south and out to sea, but be prepared in case. 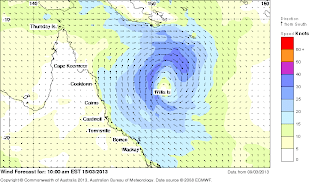