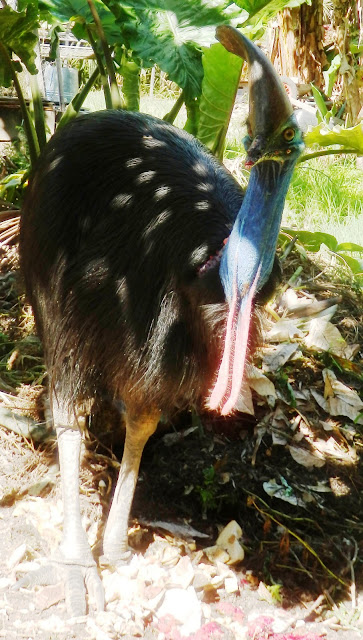 The matriarch cassowary Jessie has returned from her two month long retreat. She is very hungry and I saw her one morning this week just after sunrise enjoying the dragon-fruit I had forgotten to harvest the day before.

As I approached she stopped eating and with a beak coloured red and bits of the fruit's flesh splashed on her neck, she looked at me like a naughty child, her eyes round and innocent.

There were three more fruits ready to harvest and I quickly took them and told Jessie, in no uncertain terms to leave them alone. I don't think she understood. 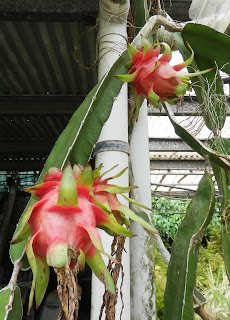 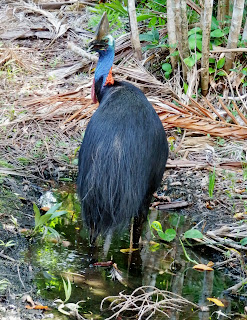 Summer is over but not the heat nor the humidity. Snout loves to sit in pools of runoff water and was not impressed when I disturbed his ablutions this week.

Normally at this time of the year monsoonal  rains relieves the heat. However, this year the rains and floods have all been in the south of the state and north Queensland has received less than 1/5 of its average rainfall.

Once again Snout has become fascinated with 'Plastic Cas'. Evey day he comes into the nursery and some days spends up to half an hour standing in front of the statue.

Hopefully now Jessie has returned he will loose interest in 'Plastic Cas' and find a real girlfriend. 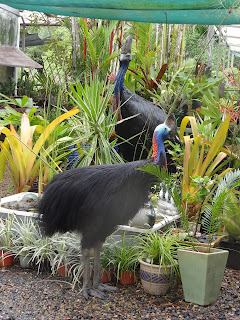 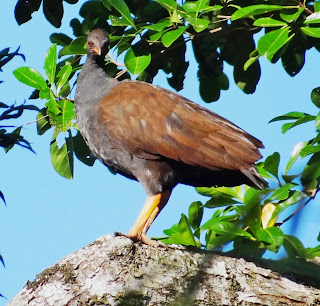 Orange footed scrub fowl calls out from high on a tree branch.


Orange footed scrub fowls are on the go. Mounds are being piled high with new vegetation  and bossy males call instructions from high up on branches.

Scrub fowls are mound builders and must keep their nest at a constant 33degrees C for the duration of the egg's incubation. As such, they continually add sticks and leaves and sometimes bits of plastic and mulch from the garden to top up their mound. Both the male and the female tend the mound, adjusting the temperature by using their beak as  guide.

These birds have boundless energy when not tending to their mound they busily scratch for insects and grubs in the garden. They will also eat berries and plant roots.

Scrub fowls can destroy a vegetable garden overnight and I have learnt the only way to grow vegetables in the rain forest is to cover the top of the garden area as well as the sides. Thus so, building a barrier to keep them out. I love to hear these birds call to each other through the night shouting the secrets of the rain forest from high in their tree perch to anyone who wants to listen. 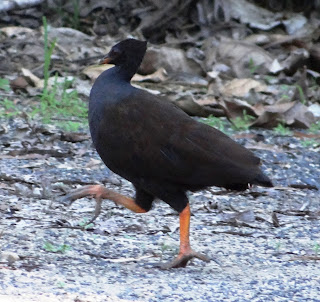 Constantly on the move the scrub fowl scurries across an opening to seek the seclusion of the rain forest.        The scrub fowl's mound is now two metres high. 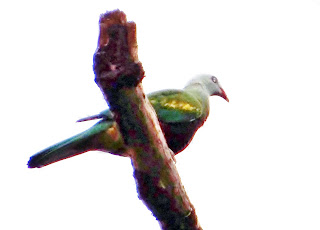 The call of the Wompoo pigeon is one of
the signature sounds of the Wet Tropics Rain forest - wallock--------woo---wallock-----woo. When I heard the call this morning I was astonished to find Wompoo perched on Crested Hawk's lookout tree. Wompoo is known for its secret ways and seldom ventures from under the rain forest canopy. Wompoo is a very large pigeon and is the same size as the female crested hawk around 37cm. I got only one quick photo of this many-coloured bird before she flew out of sight under the trees. 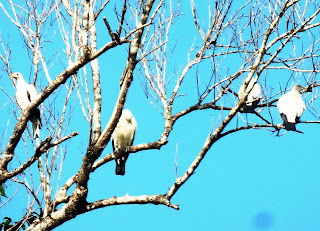 The Torres Imperial Pigeons have been congregating in large flocks all week. Yesterday I saw a flock of 50 or more birds flying north. This afternoon I searched the sky for any Ti's moving to their roost and none to be seen. I will check this week it is always sad to see these birds leave for their hazardous journey north. A small tropical low in the Coral Sea and another one in the Gulf will not make the trip easy this year. 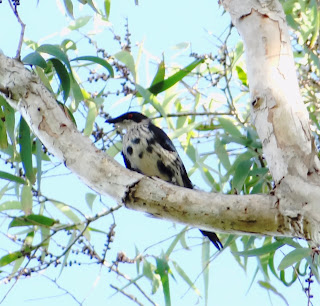 Juvenile metallic starlings are looking so cute now. Slowly their metamorphose to shining black is taking place. This particularly adventurous bird I have called spotty. It seems a shame he will loose this unusual spotted pattern. 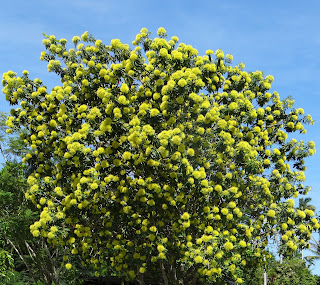 The Golden Penda, Xanthostemon chrysanthus, is the floral emblem of the Cassowary Coast Regional Council. The golden penda flowers repeatably throughout the year with each flowering lasting little more than a week.

The penda naturally occurs along watercourses withing the rain forest and is is a marvellous sight to paddle along a rainforest creek in water covered by the fallen bright yellow stamens of this tree's flowers.

The botanical name means yellow stamens and the beauty of the flower is certainly in its fragile feathery appearance. 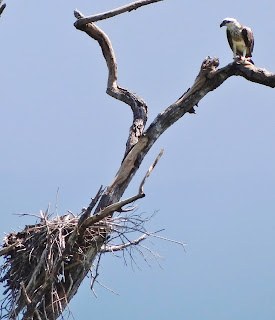 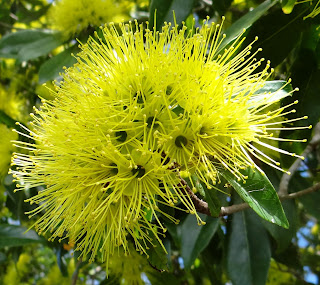 Osprey is hunting for fish every day and he brings his catch back to the nest tree, there is no sign of the female. 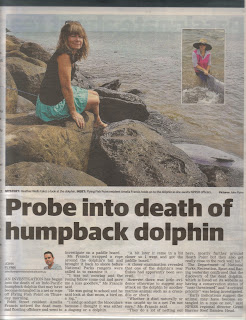 Recent dolphin deaths at the mouth of the Johnstone River have raised much concern with residents. 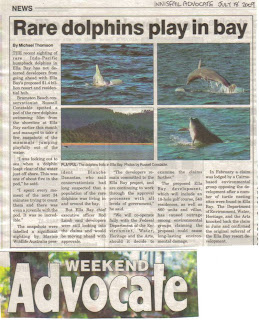 
rare and endangered humpback dolphins.
Recent sightings of fishing nets strung in the Johnstone River for hours on end without anyone seeming to be monitoring them has raised cocern that these nets and other nets were responsible for the dolphins death. 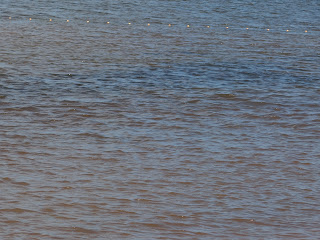 The net above was strung across the Johnstone River on the Coquette Point side for most of the weekend, a few weeks ago.
This week I spoke to the Steve Howe one of the four licensed netters in the Johnstone River.
Steve told me they were permitted to net from 6pm Sunday evening to 6pm Friday. In addition the commercial netters had a voluntary agreement not to net in the river during daylight hours.

Steve said he and the other fisherman had observed an increase in the number of illegal nets in the river. He assured me that none of the licenced fisherman had killed a dolphin. Occasionally a dolphin or a crocodile gets in the net but the fisherman take care to release them with little harm.
Steve said the catch rate in the river had not greatly changed in 20 years.