A touch of winter is in the air at Coquette Point,

The male Leaden flycatchers have arrived, this little bird always heralds the cooler drier change of weather in FNQ.   Leaden flycatcher travels north to escape the southern cold. While here they feed on abundant tropical insects before returning south in early spring to breed.

I haven't seen the female as yet but I have noticed in past years they often arrives several weeks after the males. The female is similar in shape and size to the male but has a buff coloured throat and breast. The female is less timid than the male and will often hunt insects close to people. She has learnt if a person is weeding in the garden, insects will be disturbed and this makes easy pickings for her.

Normally the melaleuca swamp is dull and murky but at this time of the year long, low sun-rays push shafts of light which penetrate into the swamp painting golden colours on the trees and their reflections in the water. 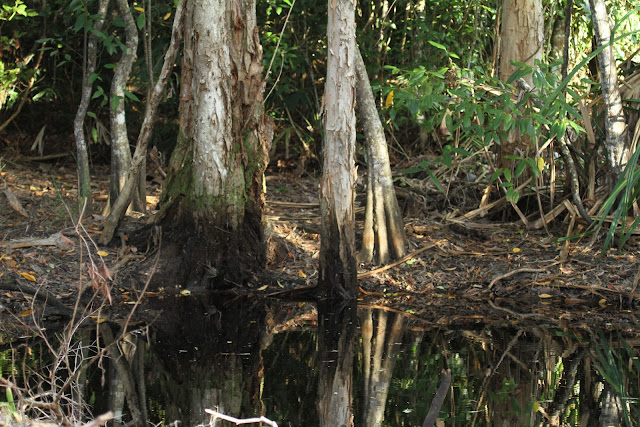 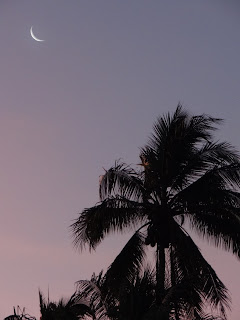 .March is normally one of the wettest month of the year in FNQ but this year the monsoon has all but failed. The nights have been clear and to see a new moon in March in a cloudless sky is indeed an unusual sight. 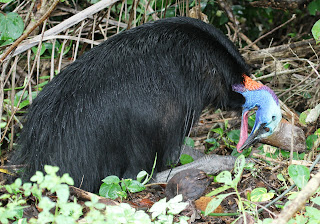 All this good weather has been too much for matriarch cassowary Jessie and she has started playing chases with Snout followed by long periods of sitting around in the mangroves, a pattern which I have observed in the past to precede courtship.  Jessie seems to be very fussy and will sit for hours tending to her feathers and feet- a cassowary with a foot fetish!       Jessie will not tolerate water on her feathers and if it is raining she constantly shakes herself dry. When Snout's feathers are wet he doesn't seem to notice and I have seen him feeding with his feathers dripping with water without so much as a shiver let alone a shake. I don't know if the difference in the personality of these two birds is due to their sex or a mark of their individualism. It would be interesting if anyone else has noticed traits of fussiness
in female cassowaries? 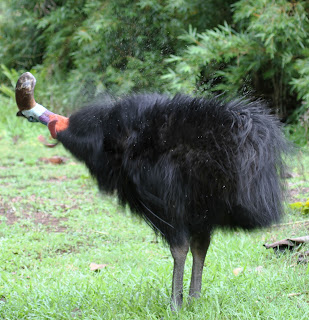 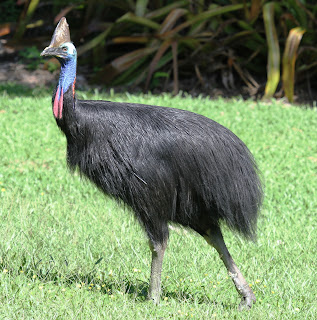 Since Jessie returned from her retreat the male cassowary Snout has been very nervous and always alert. His feathers are shining and he is looking in prime condition. Hopefully, Jessie has noticed this and a courtship will soon commence. 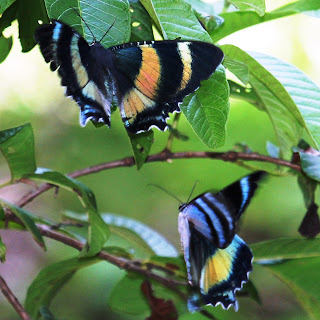 The sedentary population of Zodiac moths at Coquette Point are restless. Under the rain forest canopy small flutters of a dozen or so moths make clicking sounds as the male competes for females. It is astonishing to hear these loud noises coming from such a fragile looking creature.
Zodiac moth resting on a leaf. 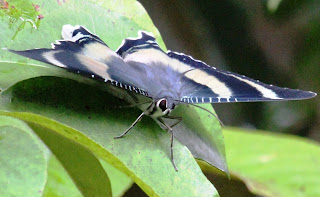 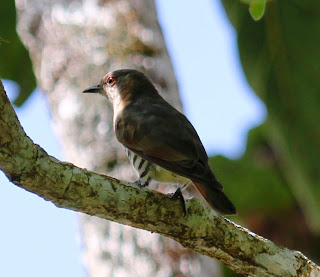 It is always exciting to sight a bird for the
first time here at Coquette Point. This week I got a brief glance of a solitary Gould's Bronze Cuckoo. This beautiful bird is distinct with its red eye patch, heavily striped chest and buff colouring on the upper breast and the sides of the neck. Gould's Bronze Cuckoo is on the red list of endangered species but of low concern. 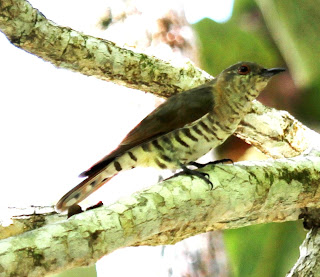 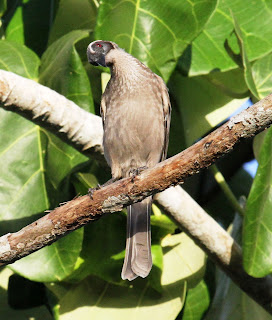 themselves in the candle nut tree. The squabbles go on for hours but none of the birds ever seems to get hurt. When I turned up with my camera one bird suddenly sat quietly and twisted its neck from side to side trying to figure out what I was doing with the camera.. 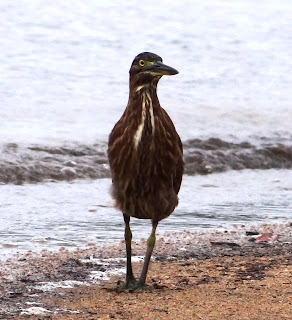 A juvenile mangrove heron has taken up residence
in the mangroves close to the nursery. Normally these birds are very shy and seek seclusion. However, this little fella diden't seem to be bothered by me as I sat quietly and very still on a rock at the edge of the river, with only a passing glance at me he kept fishing.
I was around on the front beach Thursday 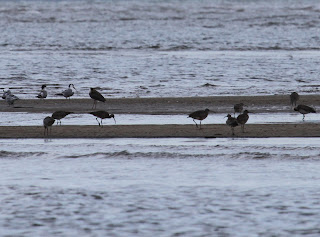 afternoon  and observed a dozen eastern curlews fishing on a sand-bank with almost as many crested terns. The exposed sand-bank was about a mile out to sea and the tide was coming in fast. Even further out to sea I saw a solitary, larger bird, the incoming tide had already covered its sandbank. I strained to identify it and to my amazement saw it was an osprey. It was standing in the water and the waves were washing up all around it. 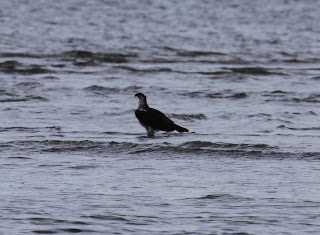 It was an incredible site to see an osprey stand in the ocean with the tide coming in all around. I waited to watch it catch a fish but the tide was also coming in around my feet and I thought it best to retreat. 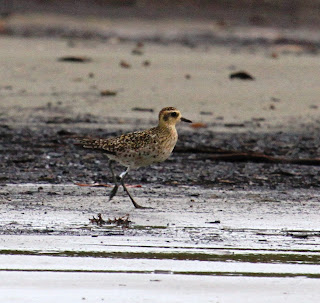 Pacific golden plovers were having a great time running after crabs on the beach.
However, mangrove kingfisher seemed to be having better success at crab catching. 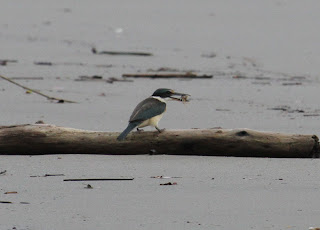 While tiny lesser-sandplovers were holding races to see which one could catch a crab. 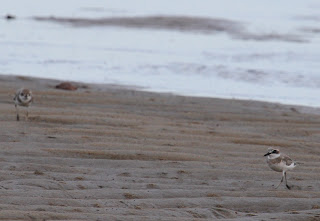 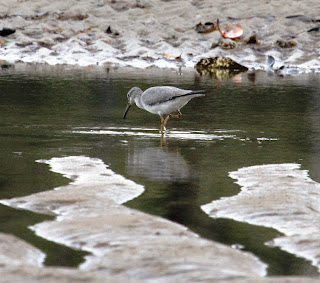 Lazy grey-tailed tatlers were mesmerised with their reflections in the water and of course hoping a fish would just swim within reach. 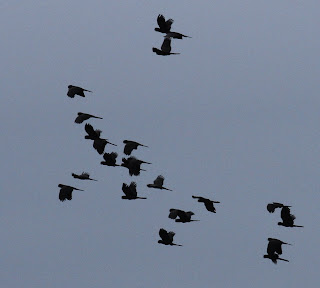 As I walked back a noisy flock of
black cockatoos flew past. They had spent the day feeding at Ella Bay and Flying Fish Point and were heading up the river to find their roost for the night.
I noticed the Council has erected a new sign to 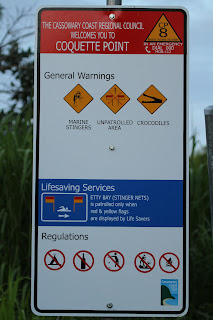 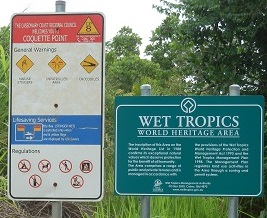 This photo shows the two signs that were vandalised.
If you are concerned for the birds and animals of Coquette Point please ask the Cassowary Coast Council and the Wet Tropics Management Authority to replace the vandalised signs covering the same regulations as they were previously.
cheers,
Yvonne
Posted by Unknown at 03:49