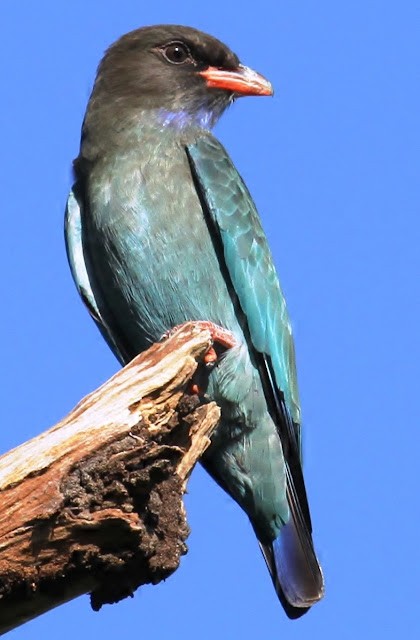 An Angel of Peace died last week. Bryan Law was only 56 and was waiting sentencing in Rockhampton for damaging ADF property when he died. Anyone who met Bryan knew his sincere passion for the environment and the Peace Movement. We thank you Bryan for a life dedicated to a better world.


Four cases of dengue fever have now occurred in and around Innisfail, only one at Coquette Point. Tropical Health has advised the Innisfail outbreak is dengue type-one race which occurs in Bali and is not related to the Cairns outbreak. Apparently someone holidaying in Bali has returned with the disease and infected mosquitoes which in turn infected the four people in Innisfail and Coquette Point.


A pair of adult dollar birds have joined the three juveniles which arrive last month and their urgent calls kak.....kak.....kak rings out in the sky over Coquette Point. The male is similar in colour to the female but his colours are slightly stronger. The adult birds show a bright blue patch on the throat. 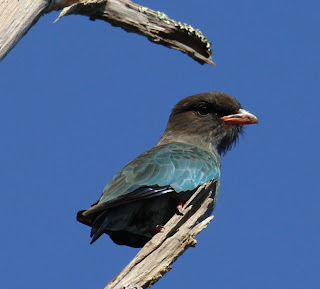 Perched on the branch of a dead tree the dollar bird has a good vantage point in which to see the slightest movement. Once an insect is sighted the strong, long wings flap loudly and with a deftly swoop which often involves an aerial roll the bird captures the insect it has seen moving around  the forest canopy. Once in flight  a conspicuous pale blue, coin-shaped patch is clearly displayed below and above the wing. At rest the wing coverlets cover this 'dollar mark'. 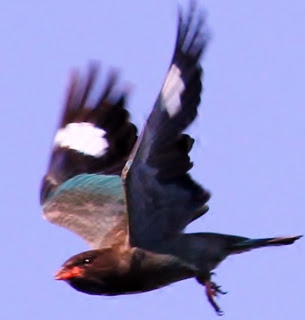 The agility in flight display of the dollar bird is spectacular to watch. Although grasshoppers caught on the wing are the main meal of these birds in the photo on the left I saw this male dollar bird pluck a millipede out of a basket-fern high in the rain forest canopy. 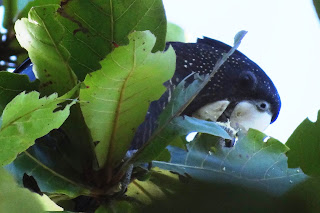 You can almost set your watch by the comings and goings of the black cockatoos. They fly to Flying Fish Point and Ella Bay at 7am every morning and return at 6pm. All day they feast on the fruit of the Johnstone River Almond, Terminalia catappa before returning to their roosting trees near the Central School in Innisfail. As they play and argue above the canopy of the almonds their red tail-feathers stand out against the green of the rain forest. What a wonderful sight. 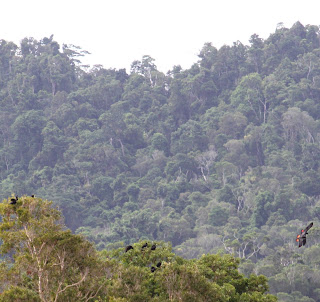 When the black cockatoos leave and night falls the spectacled flying foxes arrive and all night they noisily feed on the almonds. In the morning the cassowaries arrive to collect fruits accidentally dropped by the flying foxes. Neither the flying foxes nor the cassowary damages the seed of the almond as they only eat the fruit from around the seed. However, the black cockatoos tear the fruit from the kernel and crack the nut. The nut of the Johnstone River Almond was a major food plant for the Aboriginal coastal peoples and nut-cracking rocks can be found throughout the Wet Tropics rain forest where Aboriginal families gathered to cook fish and process the nuts. 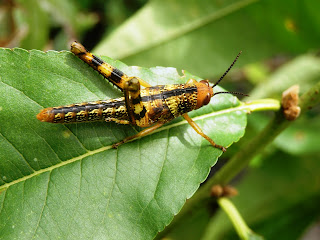 Grasshoppers are a major food item in many parts of South East Asia.  These hardy little creatures are generally treated with disdain by horticulturists, however, some grasshoppers have evolved to eat only one type of plant. The Turnbull's grasshopper eats only Russian thistle and for this reason it is known as the 'farmer's friend'.  I found this unusual brown spotted grasshopper in the nursery it has an unusual habit of hiding under the leaf of the plant and dropping its antennae onto the leaf. Grasshoppers antennae are specialised sensory devices and the grasshopper may have been 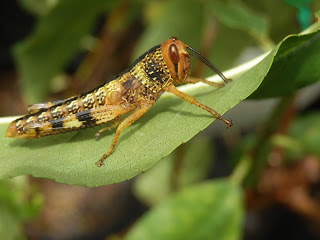 trying to find out what I was doing as it hid out of sight under the leaf. I turned the leaf over and took a photograph then left it alone it didn't seem to be nibbling on the leaf and I do not know what this brown spotted grasshopper eats. The next day it was gone and I have not seen it again.  What a little cutie! 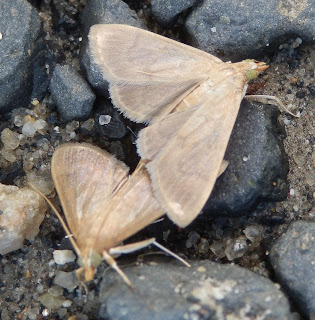 Grass-moths are mating and hatching in their thousands and just when I thought they would do the lawn mowing for me three magpie-larks turned up and decimated the moths in a few days. 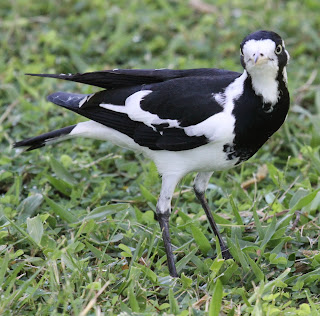 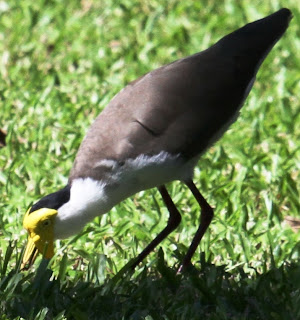 The plovers are not happy with the magpie larks and territorial battles have erupted. The plovers however, are only fighting over territory as they do not eat the moths but feed on snails and worms around the roots of the lawn. 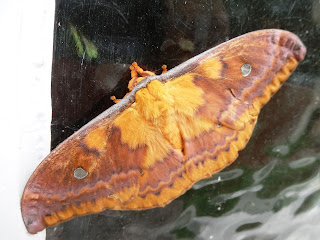 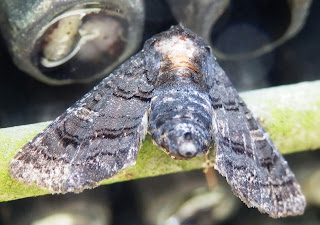 I know when the magpie larks arrive in the morning as the plovers create a furor. However, the magpie larks are standing their ground and continue to feast on the grass moths.                .Moths ordinarily thought of as the drab cousin of butterflies have every bit as spectacular colours and patterns on their wings as do butterflies. On the right a Syntherata janetta moth displays two of its four opaque windows. Below an unidentified moth at rest under seed trays in the nursery.

The four o'clock moth is one of the most spectacular moths of the rainforest.  Many of these moths are active at the moment and I found this perfect specimen feeding on the blossom of the Gove Gum, Corymbia ptychocarpa. The beautiful red flowers of this tree attract a wide range of nectar eaters. The Gove Gum is a bloodwood tree species and grows from the western Kimberely of Western Australia across the Northern Territory and into Cape York. The tree reaches an average height of five metres and appears to be resilient in strong winds. Although, this tree is naturally from the dry rain forest it grows and flowers well in the Wet Tropics. 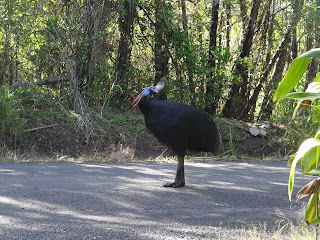 Crossing the road is hazardous at the best to times for cassowaries, however Jessie seems to have worked it out. She stops in the middle of the road does her head roll, takes a few steps out onto the road looks to the left then looks to the right and marches across. 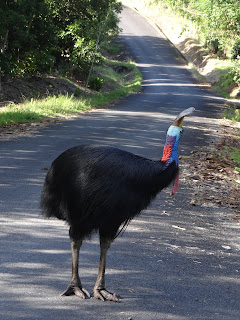 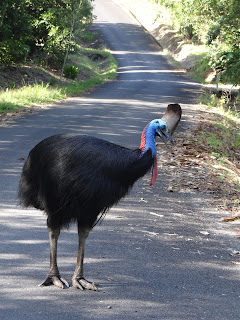 As Jessie walked across the road I am sure I could hear her saying look to the left then look to the right and??????? 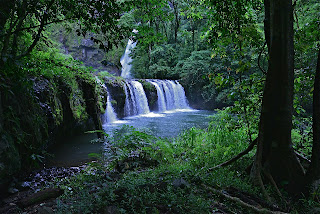 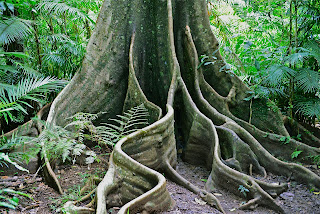 The waving roots of a rainforest giant. 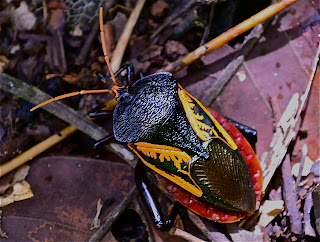 Rainforest Shield Bug
Ian and Lois L went for a walk to Nandroya falls in Wooroonooran National Park they were surprised to see a family with a dog in the park. Although the dog was on a lead Ian has raised the point that domestic dogs in parks involves a lot more than what initially meets the eye. When you see a young family accompanied by their pet dog (even on a lead) in a National Park one can start questioning the range of impacts including quarantine issues for native animals, impact of domestic animal-noise, excreta, scent-marking, impact of parasites from the pet. The mere presence of domestic animals detracts from the total range of purposes for having dedicated areas for fauna and flora preservation and the rightful focus on 'the first inhabitants' as the key focus in parks.
Ian goes on to say, "The Palmerston rangers have done much excellent back-breaking work through the rebuilds following T.C. Larry and T.C. Yasi with challenging erosion control works holding up well and several new slips presenting more headaches no doubt."
Thank you Ian for the beautiful photos and your observations.
Until next week,
keep safe,
Yvonne.
Posted by Unknown at 02:58