Hello from the end of the Rainbow, 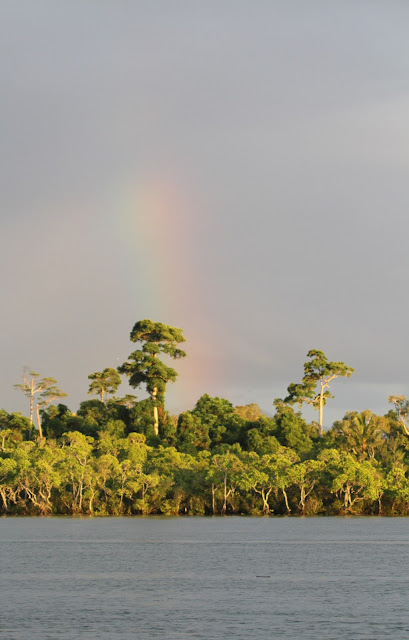 Constant stream-showers interspersed with bright sunshine has resulted in repeated rainbows in the sky above Coquette Point this week, at least two rainbows forming every day, a wonderful phenomenon.

Alas the warm showery weather has created the perfect breeding opportunities for mosquitoes and there is no where to escape the little biting blighters. It has been many years since I have seen mosquitoes this bad.  Fortunately there has not been any new cases of dengue fever reported, but the mosquitoes do make life difficult.

A flock of five sulphur-crested cockatoos are feasting, almost entirely, on the ripe seeds of milky pine trees, Alstonia scholaris, a common tree of the Wet Tropics rainforest. The cockatoos are systematically going from one tree to another and not leaving the tree until every seed has been eaten. Last week they feasted entirely on Alexander Palm fruit. In spite of its common name the milky pine tree is not a pine, however the timber is light and softer than hoop pine. When the wood of the milky pine is cut it exudes a large quantity of milky sap, this sap contains strong alkaloids, which although not known as an Aboriginal medicine, it is used by local people for the treatment of ringworm and other skin conditions. 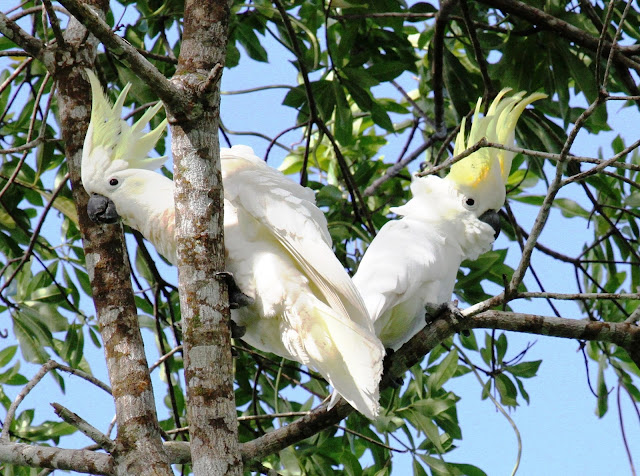 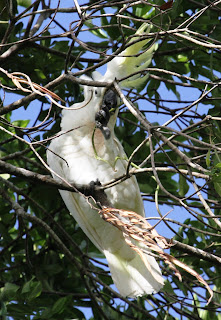 On the left the sulphur crested cockatoo has picked the fruit pods of the milky pine tree and while holding the pods in his claw he is carefully extracting one seed at a time from the long pod. 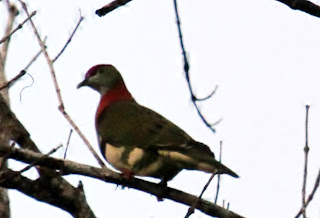 This week for the first time since cyclone 'Larry', over six years ago now, I saw the many coloured,  purple-crowned fruit dove, or superb dove, unfortunately it was very early in the morning and I did not get a good photo. However, it is another sign the cyclone damaged rainforests of the Wet Tropics lowlands are again producing fruits to sustain a diverse populations of birds.

The male purple-crowned fruit dove  is the more brightly coloured of the species and he shares nesting with the female. As he sits on the eggs through the day he is forced to gather food at night. Therefore, with his nocturnal habits he is often difficult to find and although this dove is brightly coloured in the dense rainforest these colours are a perfect camouflage. 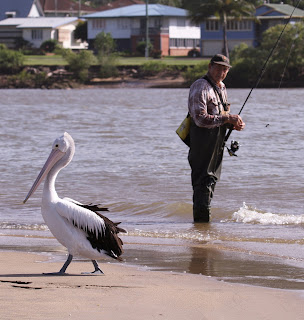 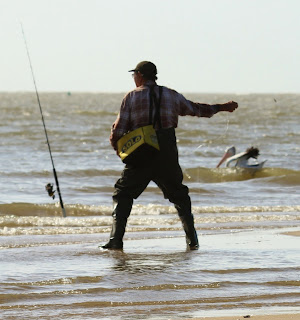 Local fisherman Ross and his mate 'Crino' are a common site at Coquette Point. 'Crino' waits for Ross to come fishing and  Ross told me the bird never eats the bait out of his bucket however, when Ross catches an undersized fish and throws it back in 'Crino' is onto it in a flash. 'Crino' does not approach other fisherman but has this special relationship with Ross. 'Crino' is named after Ross's home town in Italy.
Crino keeps guard over Ross as he fishes. 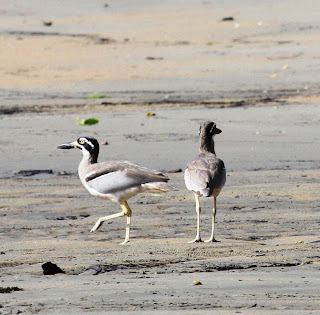 Beach stone-curlews pair bond for life and set up and defend a territory. At Coquette Point two pairs of beach-stone curlews keep constant guard over their places one pair at the northern end of the beach and the other pair at the south-western end. Beach-stone curlews are ground nesting birds and as well they also spend most of their time on the ground hunting and subsequently are vulnerable to dog attack. Even incidental play-chasing by dogs can exhaust the bird and prevent it from returning to the nest. Subsequently the populations of these birds has dropped significantly and they are on the threatened species list.

As I was watching, one curlew dug its beak deep into the sand and pulled out a crab. 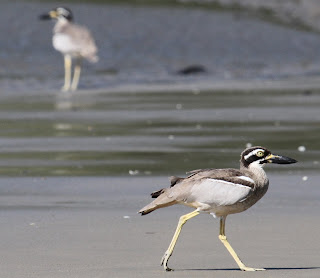 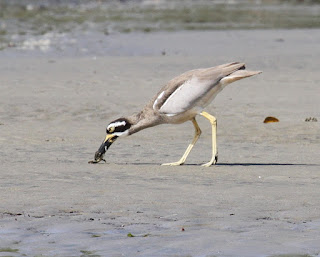 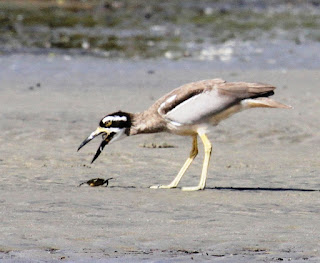 The curlew spat the crab out, then picked it up had a good look at the meal. 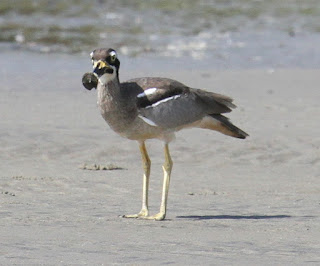 With a swift movement he put his head back and swallowed the crab whole. 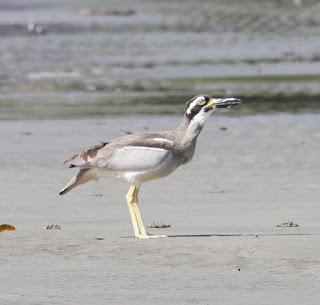 The wide, shallow, sandy estuary at Coquette Point is a rich feeding ground for waders.               At times some migratory waders will winter over in north Queensland. It could be due to their being juveniles and not strong enough for the long flight to the Northern Hemisphere or they may have sustained an injury or not be feeling well at the time. Whichever way rich feeding grounds like the Johnstone River estuary have some populations of shore birds all year. 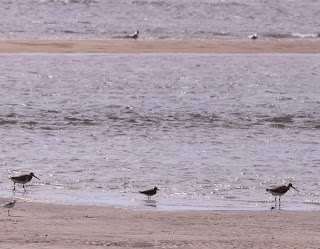 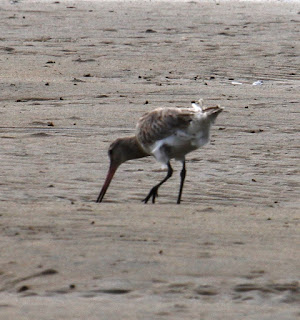 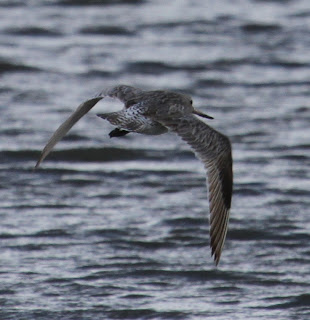 As I watched a bar-tailed godwit flew in followed by two pied oyster-catches. 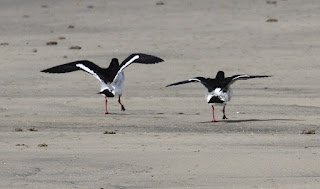 At any time of the year small populations of many species of migratory waders will be found on the rich sand-flats at Coquette Point.          While crested terns were feeding on a sandbank two eastern curlews and a grey tattler waded into the water looking for small fingerlings. At the same time little sand plovers were running along the beach catching ghost crabs.

How privileged I felt to have these birds fly in and around me and allow me to watch them feed. 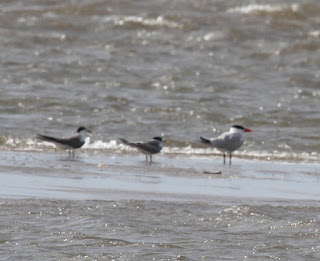 Further out I saw a very large tern in amongst the crested terns. The bright red beak was a dead giveaway, a Caspian tern, I could just make out another one on a sandbar out further. It is not uncommon to see a few Caspian terns at any time of the year, however they are not known to breed in the Wet Tropics.

The lesser crested and crested tern are present throughout the year and breed mostly on the off-shore islands of the Great Barrier Reef. 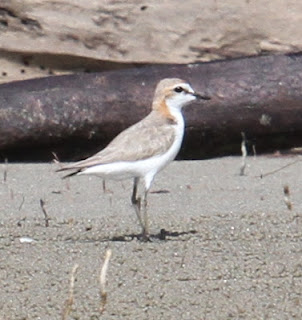 This little sand-plover wouldn't leave the protection of a log and as I approached it ran around the back of the log hiding, only to come out from behind as I passed. We played hide and seek for a few minutes as I tried to investigate if it had a nest in the area. Red-capped plovers were busy pulling worms out of the muddy sand. 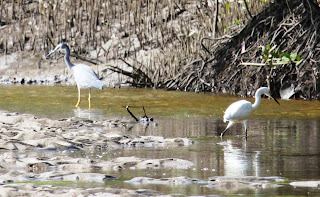 At a time of the year when you would not expect to
see a lot of shorebirds I was delighted to encounter
many different species of birds.
In the mangroves white-faced heron and little egret were fishing in the backwater. 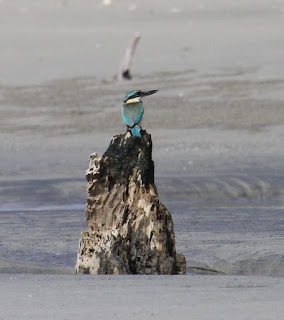 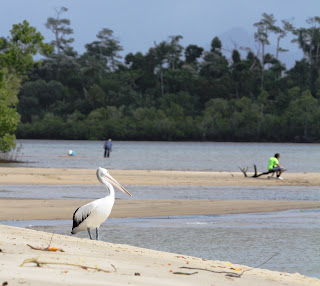 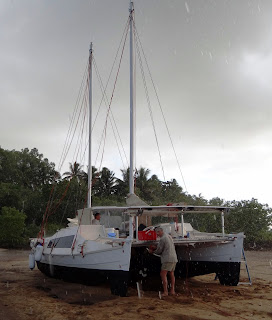 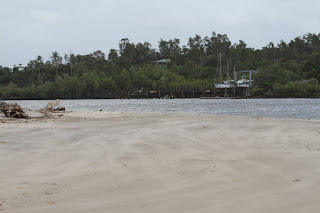 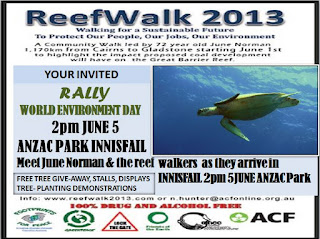 A reminder tomorrow at the Community Gardens Innisfail the 2013 Sustainability Expo will be held commencing at 9am.                         On Wednesday, World Environment Day a rally will be held at ANZAC Park Innisfail from 2pm to 4pm to greet June Norman and the Reef Walkers. June started her walk from Cairns to Gladstone this morning and will arrive in Innisfail on Wednesday 5th June at 2pm. Come and meet June or better still join the walk for as little or as long as you like. www.reefwalk2013.com

Cheers for this week and I hope the sun is shining at your place, happy first winter's day.
cheers Yvonne