The monsoon trough has dropped down and as I speak there are two active lows, one circulation over the Wet Tropic Coast and the other in the Gulf of Carpentaria. We now are in a waiting game to see what will happen. While most frogs are in their element, with rain falling and are noisily singing love songs I found this white lipped looking very unhappy. She was sitting on a leaf and even when I poked a camera in her face she did not move. I noticed there is a small ulcer on her skin between the right eye and nostril. The skin generally looks unhealthy and the eyes remained half closed in spite of cool rain falling all around her. Her unusual behaviour is typical of chytrid fungus, a dreadful disease afflicting frogs. This is the first time I have seen it at Coquette Point and one wonders if it is linked to the stress these frogs would have endured during the long drought.
Pond apples are ripening on the trees and the cassowaries are enjoying the sweet feast. 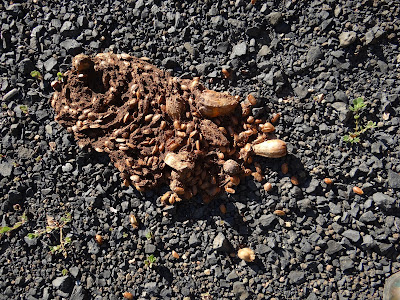 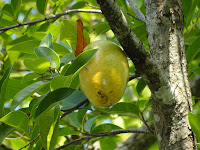 All the cassowary scats at the moment contain large amounts of pond apple seed.
As soon as a pond apple fruit falls Jessie rushes to eat it.
While Snout keeps out of sight hiding in the swamp. 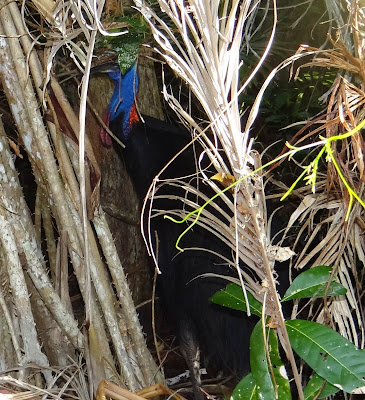 Rosie has returned to the end of Coquette Point and she is looking quite beautiful with her wattles developing. 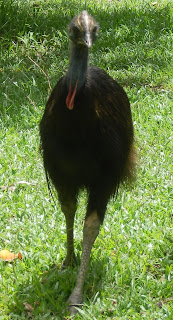 Barred cuckoo-shrikes have returned and are eating figs.
When Rosie turns up Snout chases her with much honking. She doesn't run far and it seems more a game than the aggressive behaviour he shows to Biggles when Snout chases until Biggles is far away. 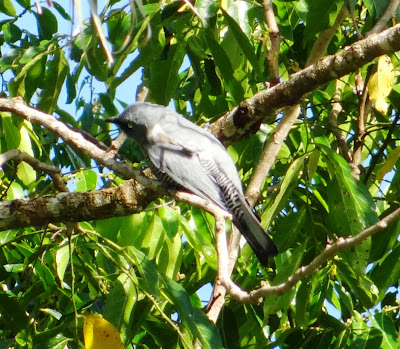 This young butcher bird has just left the nest and the parents guard it carefully and respond to its continuous calls for food by bringing lizards snakes and frogs. 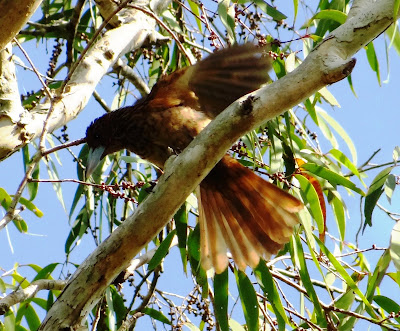 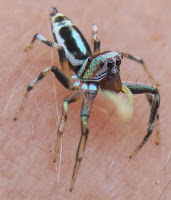 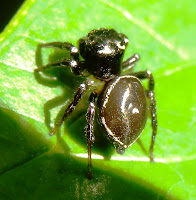 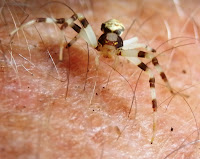 Jumping spiders are very active this week and the one on the right is a new one for me. It is so amazing to see the diversity of these little creatures. 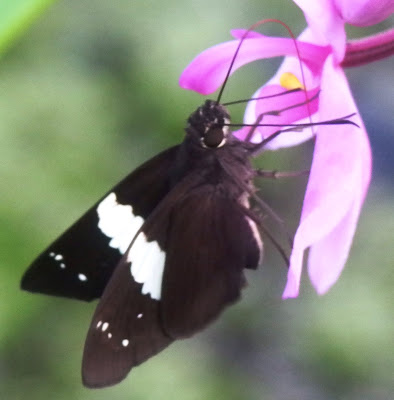 This white barred moth is deeply drinking the sweet nectar of a native spathlogottis ground orchid, flowers are everywhere in the rainforest.
Cheers for now and let us hope all remain safe while natural disasters seem to be a part of everyday 21st century life. We know what we have done to cause it but we don't know how to fix it as the tipping point has long gone.
On that happy note cheers,
Yvonne.
Posted by Unknown at 03:10 No comments:

Hello from Coquette Point,
While the bulk of Australia is experiencing heat-wave conditions and dreadful fires the coastal Wet Tropics has been under the influence of a weak ridge that is bringing cool sea-breezes with frequent light rain showers:we are having perfect tropical, summer weather. The monsoon trough is sitting over the bottom end of PNG and resisting all attempts by cyclones, like the cat 5 Narelle now off Western Australia, to bring it down over the Wet Tropics.

With the increased moisture and humidity the frogs are in a frenzy and their chorus is a constant background noise in the rainforest and swamp. < 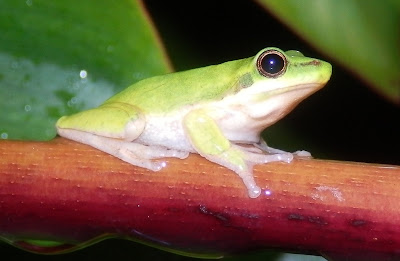 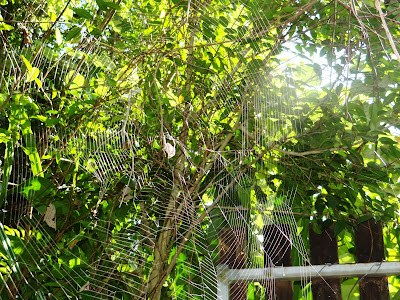 When I went to open the gate yesterday morning I found the spiders had updated my security. A Garden Orb Weaver spun her web between the gate and a tree, anyone trying to enter would have received a nasty surprise. This Garden Orb Weaver seems to like the position and was there again this morning, she generally has the web wound back up soon after sunrise. Garden Orb Weavers  hunt at night and sleep all day in a bed of leaves. 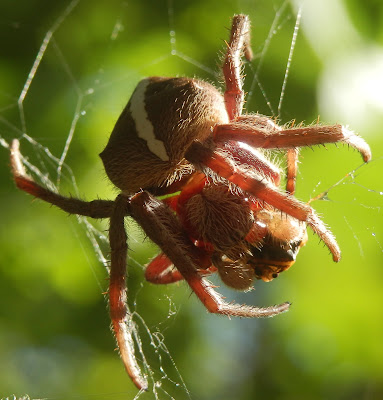 However, the Golden Orb Weaver hunts day and night and occupies her web as a permanent base. This spider's web consists of many different types of silk and the drag-line silk has a tensile strength comparable to high-grade steel. For thousands of years coastal fisher-people made fishing lines from golden orb weavers web's silk. 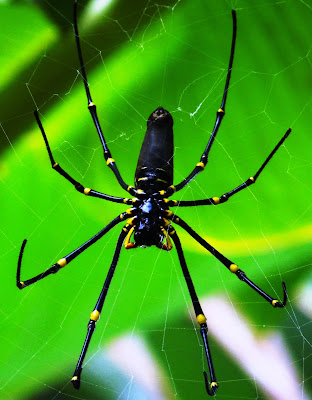 Deadly but beautiful is the nature of much of the rainforest and none more so than the scented Daphne, Phaleria clerodendron. The pure white satin textured flowers form in clusters on the trunk and branches of the tree and release a strong sweet perfume. Phaleria clerodendron is a small understorey rainforest tree and once pollinated the flowers quickly set bright red-apple fruits which are deadly poisonous, every part of this tree is poisonous. 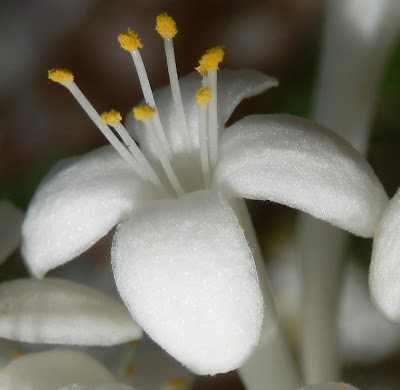 The small rosy red apples form on the trunk within a month of  the tree flowering and are eaten by cassowaries. 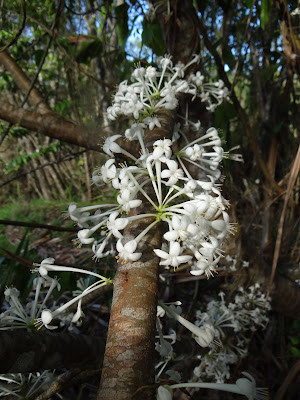 Mangoes did not set well on the tropical coast this year and I was delighted to see a few fruit high up in one of my trees. With a long pole and much effort I pulled them down, plop, plop. The next minute cassowary Snout appeared out of the forest and like a naughty boy picked up a mango and ran. I gathered the rest and also ran to put them away safely from the cassowary thief. 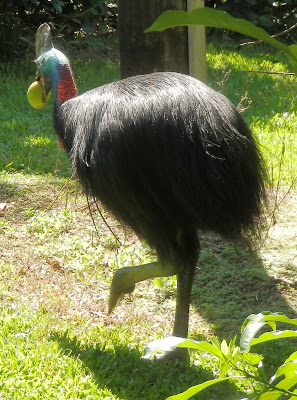 Cassowaries respond to the sounds of falling fruits and when the Torres imperial pigeons are feeding on the damson plum the cassowaries are soon on the scene collecting all the fruits the pigeons accidentally knock down. I was photographing the pigeons when the matriarch cassowary Jessie appeared, I had not seen her for over a month. The time also coincided with the top of the King Tide so perhaps she had to move out of the swamp. 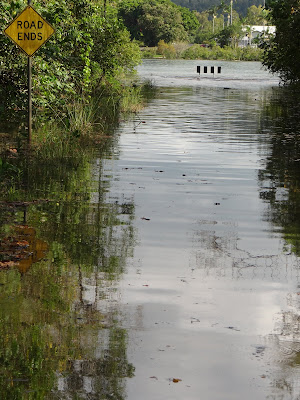 King tide at the end of Coquette Point road. 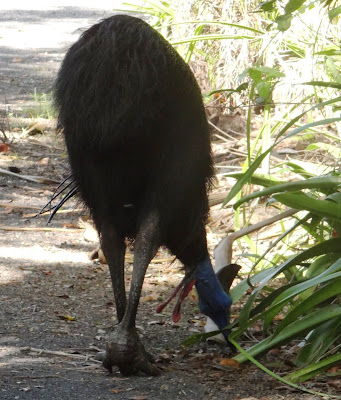 Torres Imperial pigeon knocks fruit to the ground for the cassowary. 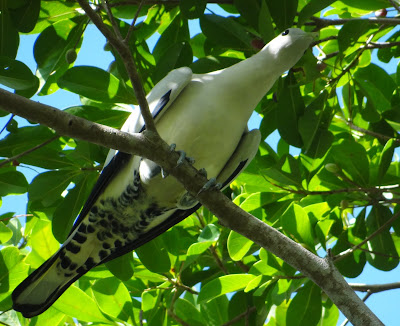 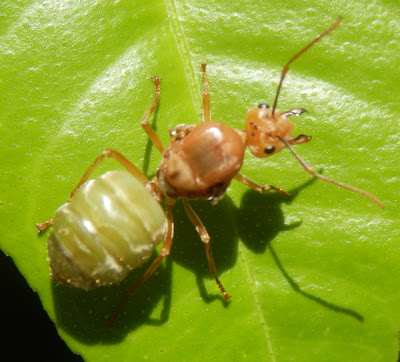 Nothing is more indicative of the changing seasons than ant behaviour. Lately I have observed a swarm of Queen green ants spread all over the property. These single dealate-ants are all that is needed to start a new colony. The flighted Queen leaves the old nest flies to a new sight rubs off her wings and builds the frame work for a nursery where she deposits her sack of eggs. The eggs hatch into workers which build the nest structure and a new colony begins. By the numbers of new Queens around there is going to be an explosion in green ant numbers this year. 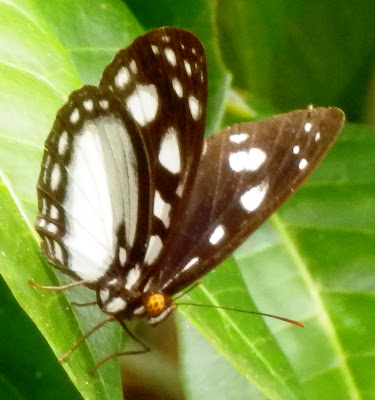 Butterfly numbers have also increased
over the last month with lots of Cairns hamadryad and blue triangle butterflies fluttering across the hot, clear blue sky and in the middle of the day they rest in the shade of the rainforest.. 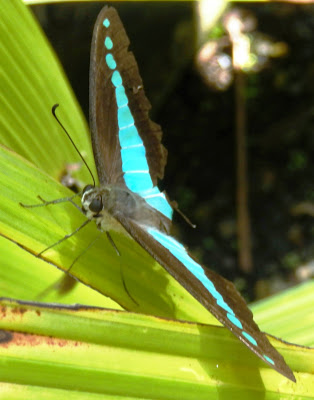 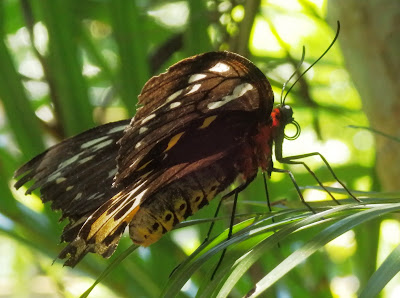 Cairns bird-wing females are
busily laying eggs and some of the females look old and tatty.
Rainbow lorikeets, just after daybreak, have been nosily engaged in group sex to secure their future.............In the heat of summer it is all happening. 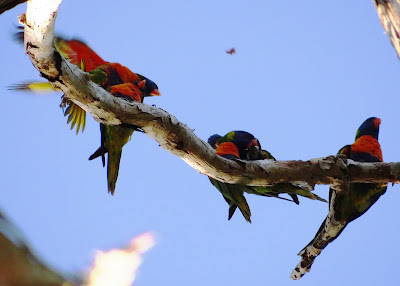 The peace of a perfect afternoon was broken today when I heard a chainsaw in the mangroves on my property boundary. With camera in hand I investigated. 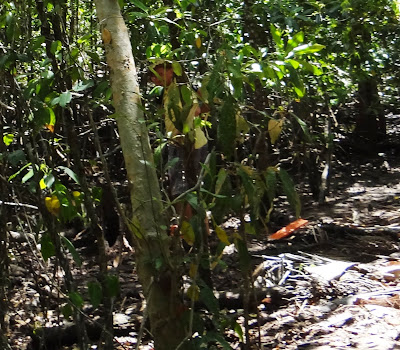 I found two men chopping up timber in the mangroves. When I made them aware that they were breaking the law they left. The older man said there were no signs saying the area was Wet Tropics and he thought he could walk in anywhere and cut up old logs.
I will again ask the Council and the Wet Tropics authority to replace the vandalised signs showing the area is protected.
Have a peaceful week,
Yvonne.
Posted by Unknown at 01:11 No comments: