Winter weather came in with a rush yesterday, the humidity dropped and the clouds evaporated exposing a bright blue sky.
While we all whinge about the rain a friend Doug put it into perspective for me when he returned to Innisfail this week. Doug told me north western Queensland is in severe drought and this year for the first time in over 90 years the Flinders River has not run at all.
Its not just Queensland in drought, the wheat belt of Western Australia is also in a dire situation, they have not received any meaningful rain in over four year.
As Doug drove back to Innisfail along the Kennedy Highway this week he said he saw the countryside suddenly turn green and he knew he had returned to the 'land of big trees'. 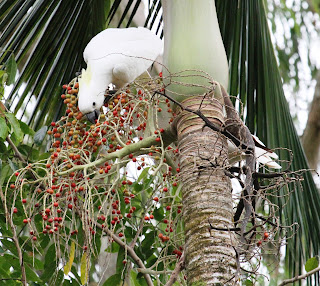 The sulphur crested cockatoo is beloved by Australians as a pet bird, however, it is often hounded for the damage it can do to fruit crops. There are many ways to protect crops and sometimes it is only a matter of planting divisionary species. This week I watched  three sulphur crested cockatoos enjoying the ripe fruits on the Archontophoenix alexandrae, the alexandra palm.
As they plucked the fruits I was enchanted with the delicate way these wild birds ate and they were in no great hurry. 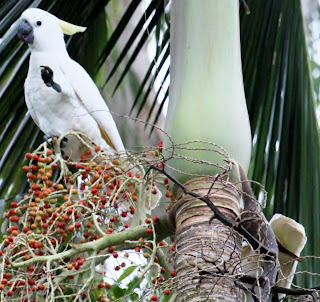 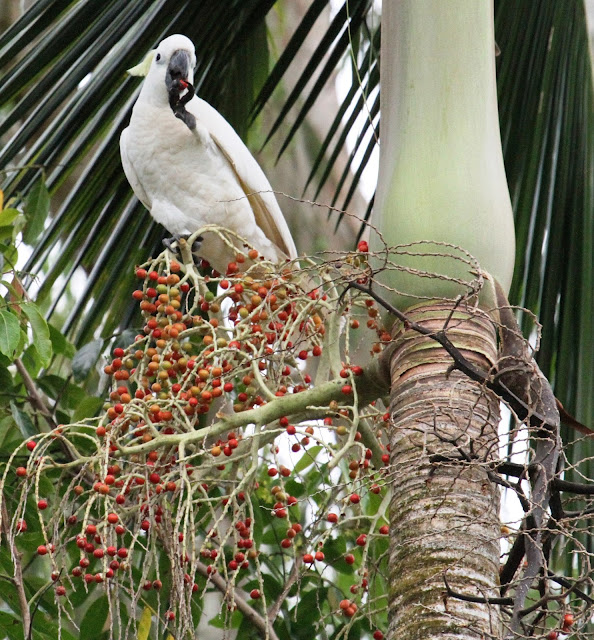 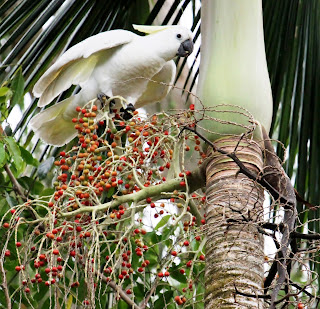 It was such a privilege to watch these sulphur crested cockatoos  as they fed and interacted with each other. Given the opportunity all animals prefer to eat a diet of their own natural wild food. 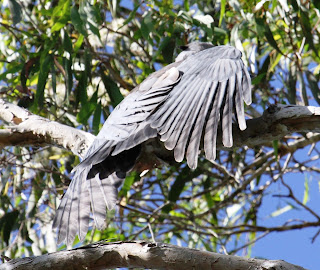 Crested hawk enjoyed the change in the weather and for over half an hour yesterday morning sun-baked on the branch of a tall tree. He stretched out his wings to catch the sun's warmth. 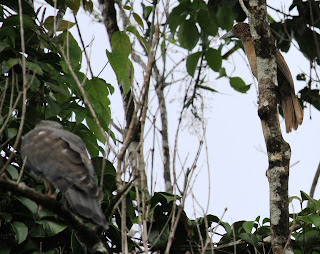 When to my amazement a young butcher bird, less than half the size of crested hawk, landed on a branch close to hawk and started screeching obscenities at hawk, or at least that is what it sounded like to me. Hawk flew off to another tree and bossy, young butcher bird burst into a cheeky song telling all that he was master of the canopy. 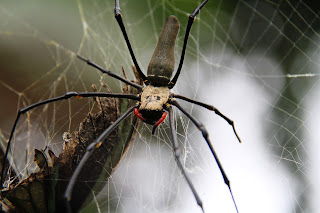 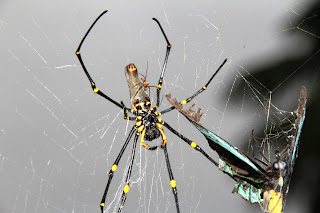 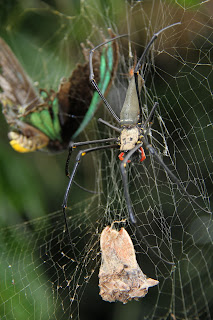 Golden orb spider is doing very well for herself catching so much food in her web she is in danger of becoming obese, or at least that is Ruth L's concern for the spider on her veranda. Ruth reports her spider now has five male suitors.
I watched one big girl in my garden as she cleaned her mouth before tackling the next tasty treat and saw a male crawl over her body and around the larder of food without any challenge from her. Of course it was distressing when a beautiful male birdwing butterfly flew into the web. 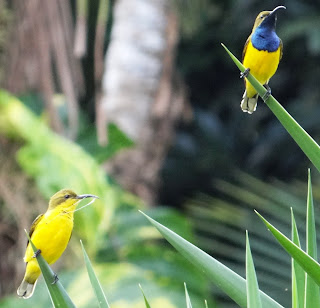 The yellow sunbirds are in a frenzy of activity and while the female does all the work in gathering material to build the nest the male is always nearby offering advise and standing guard. My veranda is littered with old and new nests. These little birds like to build in sheltered areas away from the rain and often seek the eaves' and verandas of houses. 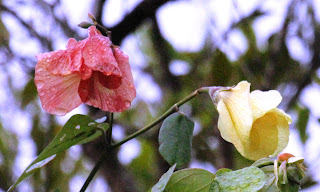 Hibiscus tiliaceus, the cottonwood tree is in flower along the watercourses of the wet tropics. In the afternoon the petals of this beautiful flower change colour and darken to shades of red and maroon before falling and floating on the water and out to sea.  The falling of the flowers is always a sign that the winter weather is here. The flowers of the cottonwood are edible and make a sweet addition to a salad. The bark of the tree was used by Aboriginal people as well as passing seafarers from which they made very strong ropes. 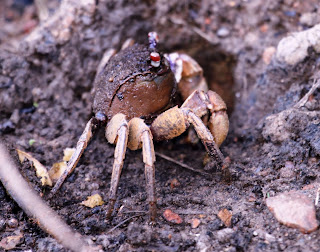 Higher tides always bring the horn-eyed mangrove crab into the nursery. This is often very disconcerting for customers but children love to chase them.
I often wonder if I removed the nursery how long it would take for the animals and trees to repossess the area. As it is we try to make room for each other. 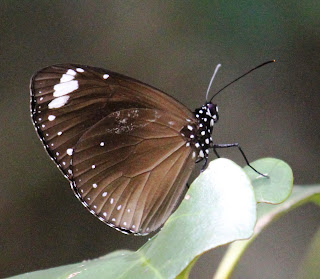 There has been a sudden hatching of common aeroplane butterflies and hundreds of them are flying around the nursery at the moment. 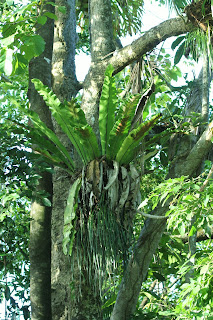 Epiphyte are one single group of plants that particularly distinguish rainforest from other forest types. Epiphytes are plants that use other plants as support without damage to the host. In the dry season many epiphytes dry out but when the rains arrive the epiphytes suddenly burst into splendid growth turning tree branches and trunks into hanging gardens. The swaying fronds of a Vittaria elongate, tape fern, have swollen in the wet season and hang out and down from the rich debris made by an Asplenium nidus, bird's nest fern, all in the canopy of a large Nauclea orientalis, Leichhardt tree. 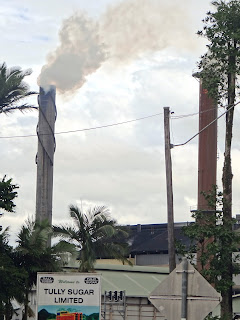 I was in Tully this week, sitting down having a cuppa with friends when suddenly, cough, cough,  the Tully mill burst into life, the 2013 sugar-cane season has started in the Wet Tropics. Please take care on the roads and keep a look out for cane trains and trucks.


Cheers for this week,
Yvonne