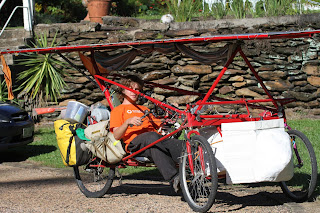 Lots of visitors turned up this week. First to arrive was Sam Mitchell on his self built, solar-powered bicycle. Sam is 18 years old and he is bicycling around Australia to promote sustainable transport. Sam left East Gippsland in Victoria on March 11 and arrived in Innisfail on Monday June 3. After a little R&R Sam will be leaving Coquette Point to continue his trip bound: Cairns, Normanton, Mt Isa, Darwin, Perth and then across the Nullarbor and back home to East Gippsland.  Sam has a Facebook page and his blog is http://solarshiftaus.blogspot.com 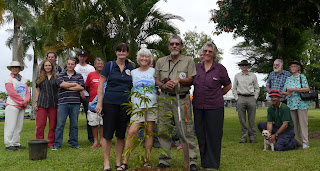 On June 5, World Environment Day nine Reef Walkers arrived at ANZAC Park Innisfail and were greeted with a welcome to 'sea country' by Mandubarra Elder Henry Epong and later planted a tree in ANZAC Park, Podocarpus dispermus, commonly called the Brown Pine to celebrate the day the Reef Walkers came to Innisfail. This ancient pine tree has a very limited distribution growing between Gordonvale and Innisfail and in the eastern Atherton Tablelands of the Wet Tropics. The brown pine fruits in Spring and produces a bright pink, juicy fruit from which two and sometimes three seeds hang. The fruit is edible and was favoured by Aboriginal people.  Photo in the foreground Nellie Epong with June Norman, Henry Epong and me. Background left Reef Walkers and on the right members of Innisfail Landcare. 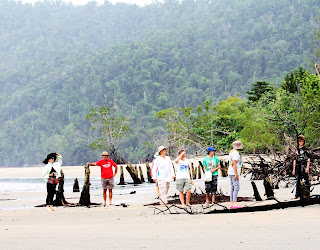 The ReefWalkers looked around Coquette Point, they examined mangrove dieback and met cirnio the pelican. 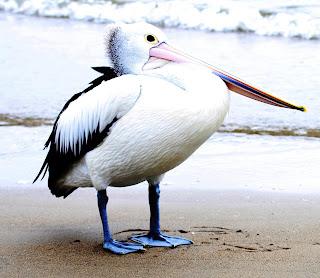 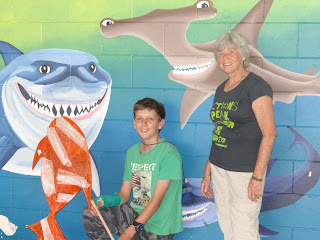 June Norman was delighted to see the reef murals on the wall of the Mourilyan School. 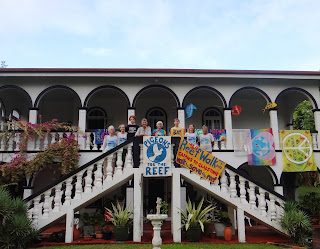 Before the Reef-Walkers left Coquette Point Friday morning they decorated the house with their banners and flags for a group photo. 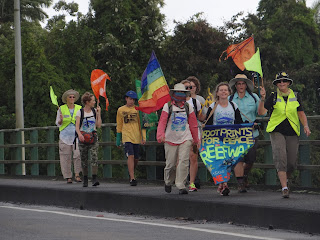 Then it was back to the Bruce Highway for the Reef Walkers to continue their walk from Cairns to Gladstone. 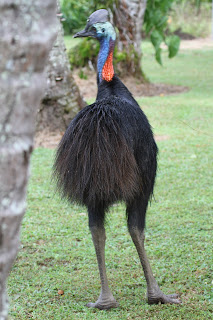 We had lots of Cassowary visitors this week and were delighted to see, the young cassowary adults 'Don' and 'Q' again. I have not seen these two birds for nearly a year and can only assume when the adult male cassowary 'Snout' disappeared following his courtship with matriarch cassowary 'Jessie' the young birds have, now with 'Snout's' absence returned to the area they occupied as chicks. 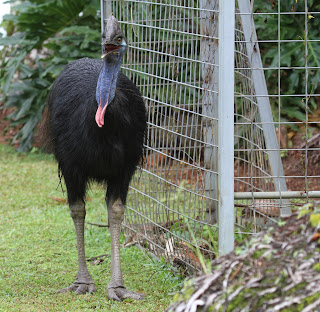 'Don' on the right has developed a bustle for a tail and struts around like a dancer. He examined the pig cage and was not at all impressed and started drumming and prancing around the cage, perhaps he could smell the pigs.

My pig cage is baited with coconut and has a push-open door which the cassowaries cannot open. It is an unfortunate fact that many cassowaries are killed by being caught in pig cages. Not only are most of the pig cages used by 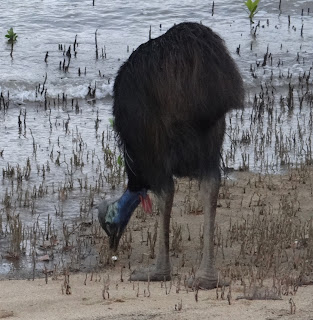 trapping programmes the wrong design for 'cassowary country' but as well these cages are baited with food that attracts the cassowaries.  Whereas, coconut, taro and palm or pandanus heart are favoured pig foods they will not attract cassowaries into the cages. It is beyond my understanding why it is not mandatory to have cassowary-safe pig trap cages which are baited with food that does not attract cassowaries, particularly as most of the pig-trapping-
programmes are funded by Government.

I have seen 'Q' almost every day  this week she has been eating crabs particularly fiddler crabs from the beach around the mangroves. 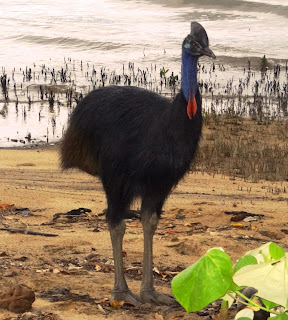 It is so good to see these young birds looking so healthy. 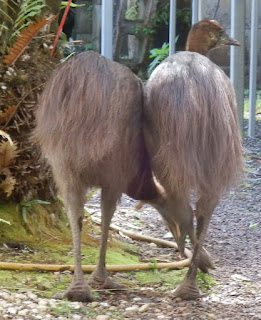 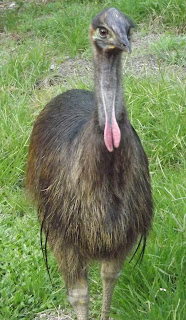 I took the photo on the right of 'Don' and 'Q' on the day their father 'Little Dad' first left them to fend for themselves 25.7.11. 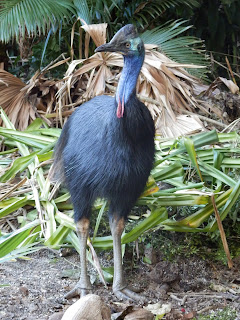 The photo on the left was taken on the January 10 2011 of 'Q' when he had separated from his sibling and it shows the distinct pattern of his wattles.


My previous last photo of 'Don' as a sub-adult was taken on July 21 2012. At this time his feathers were just starting to turn black. 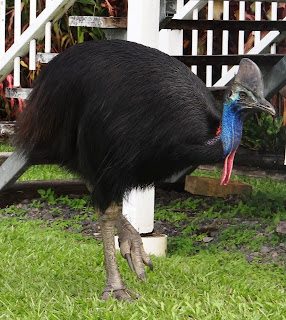 I also saw another young bird which I think is 'Rosie's' sibling. The bird still has a few brown feathers on his tail but for such a young bird has a very large casque and long wattles. This cassowary has very large feet and was walking in front of the houses at the top of the Moresby Range.

It is interesting that these young birds have returned to the built up area at Coquette Point at the time when their mother 'Jessie' has gone off with 'Snout'. 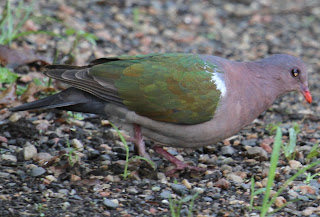 The green emerald doves have returned to the coast and his return generally signals cooler weather is on the way. 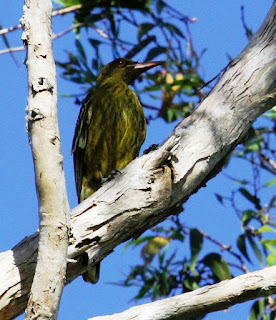 Yellow Oriole has also returned to the coast and his loud calls can be heard every morning and afternoon singing out from the top of the rainforest- canopy warning the other birds not to mess with him. Yellow orioles are fruit feeders and their strong red beak can demolish a pawpaw fruit in minutes.


To commemorate the Reef Walkers Margaret Morehouse very cleverly adapted the Australian national anthem. With a Federal Election on the horizon we will soon have to decide what direction we want Australia to follow.

Australians all, let us proclaim,
We're neither young nor free;
With stolen soil our need for oil
Will kill the living sea.

Where once abounded nature's gifts
Of beauty rich and rare,
On history's page, at every stage,
The myth: Australia's fair.

Beneath our radiant Southern Cross
We'll dig with hearts and hands;
Until our landscape suffers loss
Renounced by other lands.

For those who come across the seas
Our bounty we'll not share;
With hubris let us still proclaim
The myth: Australia's fair

In boastful vein let us proclaim
The myth: Australia's fair.

With tears of shame let us proclaim
Australia's far from fair.

If you see the Reef Walkers please give them a wave of support.