Another week of wind and rain is behind us. Thankfully today opened with bright sunshine. 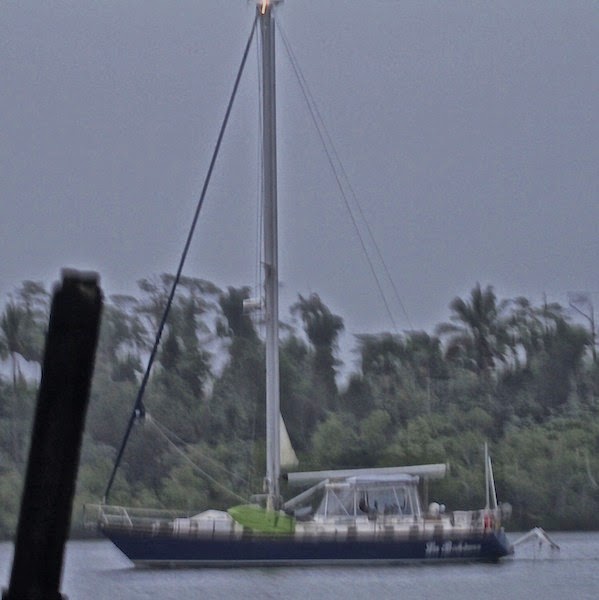 On Wednesday night the wind blew a sailor in from the sea with a desperate call.  It was Justin McCallum on his yacht 'La Boheme' he wanted to know what had happened to the marker buoys in the Johnstone River? Justin was returning from a voyage around the islands of Papua New Guinea and as fate would have it he entered the Johnstone River at night in a rain squall which allowed him little visibility. 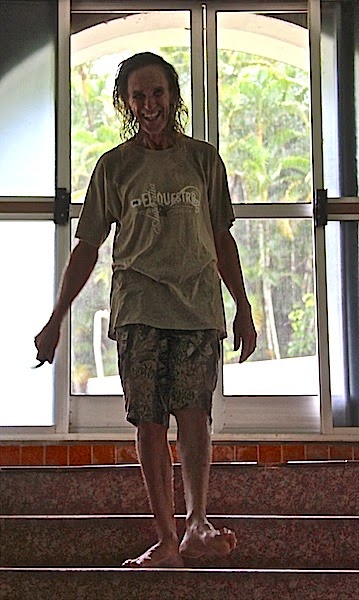 Justin was at Misima Island when the low that was to become TC Ita started to form into a cyclonic system. Justin took 'La Boheme' into the mangroves and sheltered while the storm raged over them. Justin said that when it passed the Islands in the region were devastated. The people of Misima and the Louisiades Islands had lost their homes and their crops to the cyclone.
We heard nothing about the plight  of these people on the Australian media. Of course we were all too concerned about what was to happen to us - yet again.

Misima island is located at lattitude 10.41 degrees south and it is unusual for a cyclone to form above 12 degrees south of the equator. It appears the unusual in weather occurrences is becoming the norm. 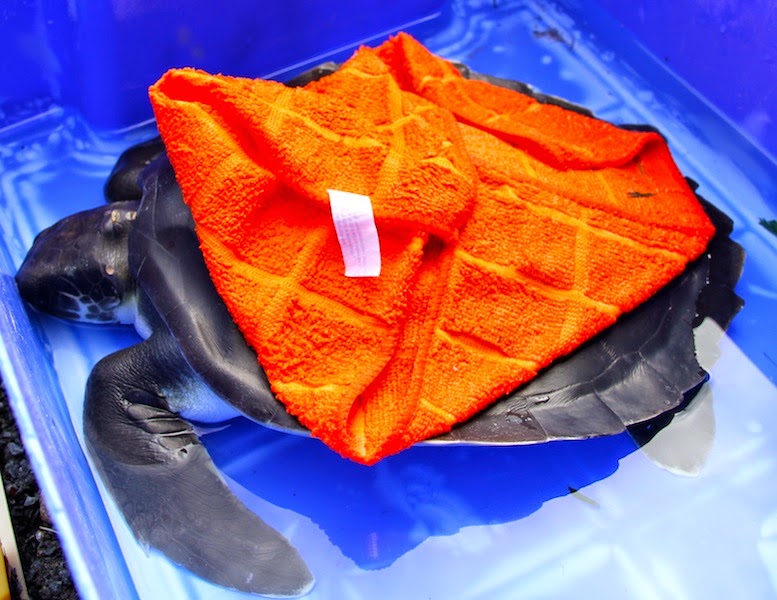 Another refugee arrived at Coquette Point this week and this time it took the form of a juvenile flatback turtle.

The turtle was found by Geoff Stapley of Mission Beach on Wednesday morning. The turtle was upside down at the top of the high tide mark on Mission beach. Geoff picked it up and tried to put it back into the ocean, but it was struggling with the rough seas and exhaustion. He called for help from Jason of Mission Beach Charters and Jason got in touch with Nellie Epong,  of Mandubarra Turtle Triage, here at Coquette Point. Now 'Slaty', as Nellie has called it, is receiving the very best intensive care.

There is good news tonight as for the first time, late this afternoon, little 'Slaty' took a feed of squid from James Epong. James told me the first feed is critical and he is hopeful this little flatback turtle will make a speedy recovery and hopefully will be returned to the ocean within weeks. 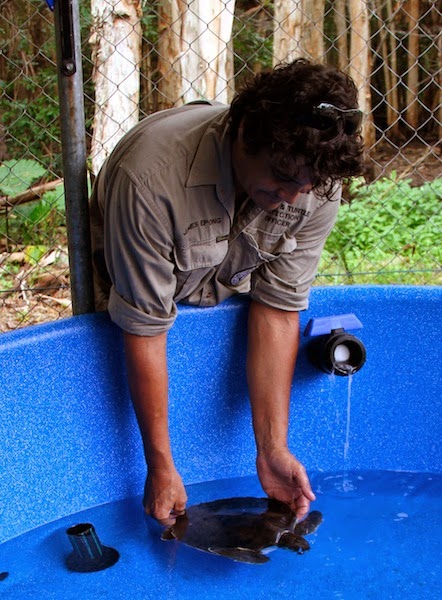 James drove down to Mission Beach to collect the injured turtle and it travelled back in a purpose built tank with a damp orange flannel on its back. James gently lifted the turtle into the holding tank he had prepared.

The next morning the turtle was swimming strongly around the tank. 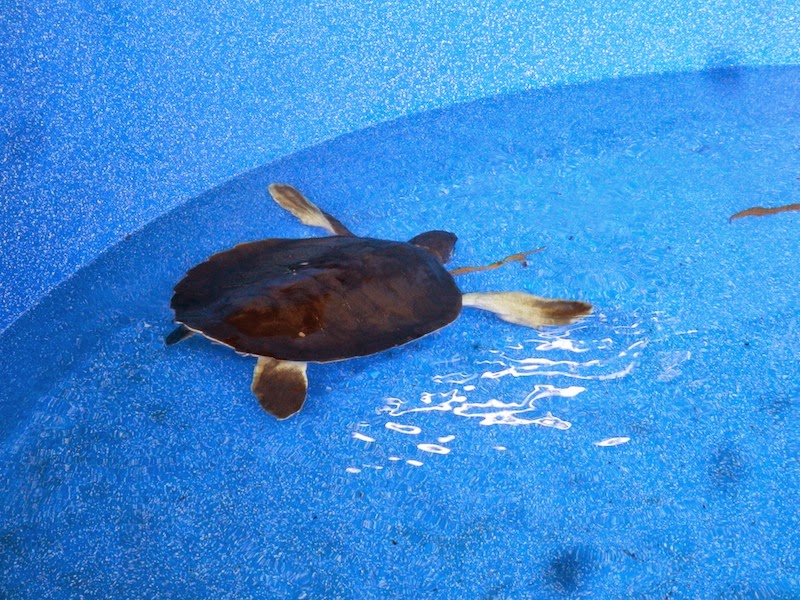 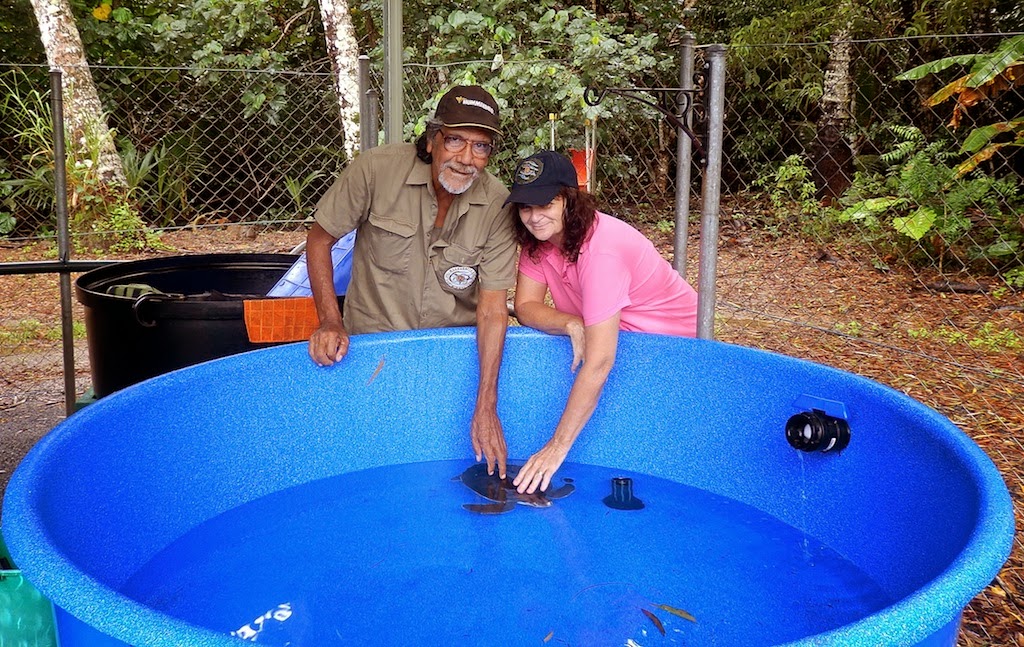 Little 'Slaty' receives around the clock care from the Mandubarra Turtle Triage members.

Pictured Henry and Nellie Epong examining the turtle for any sign of injury. 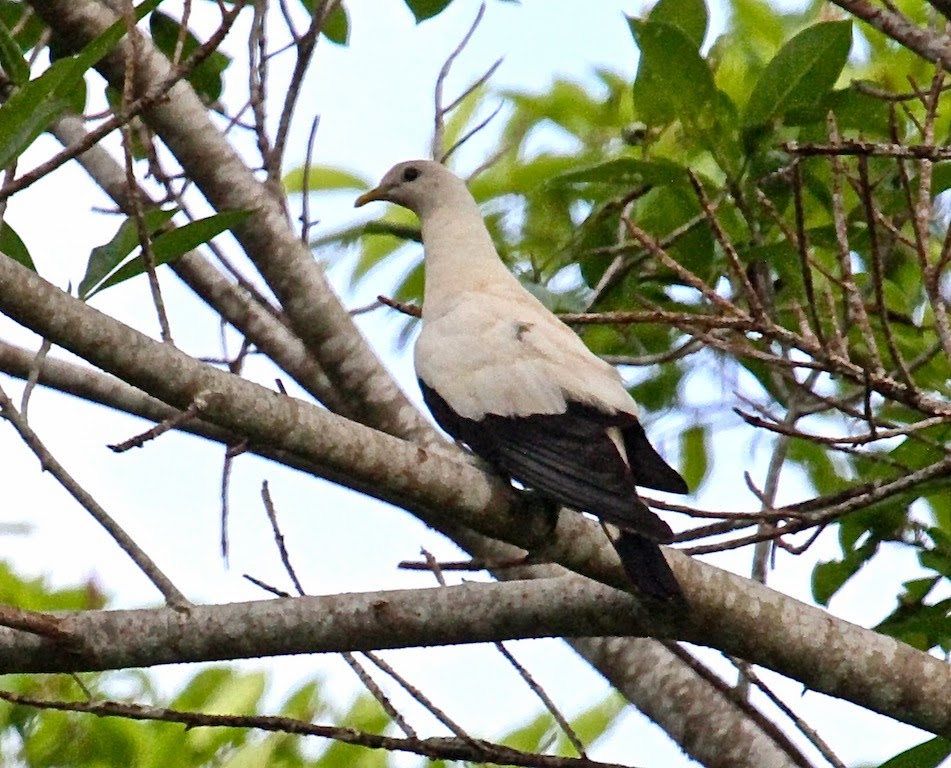 This week only one Pied Imperial Pigeon was sighted and that was early Tuesday morning.  This bird is either a straggler or has decided to winter over. However, I have not seen it again nor any other PIPs, so I assume the birds are well and truly gone on their migratory journey. 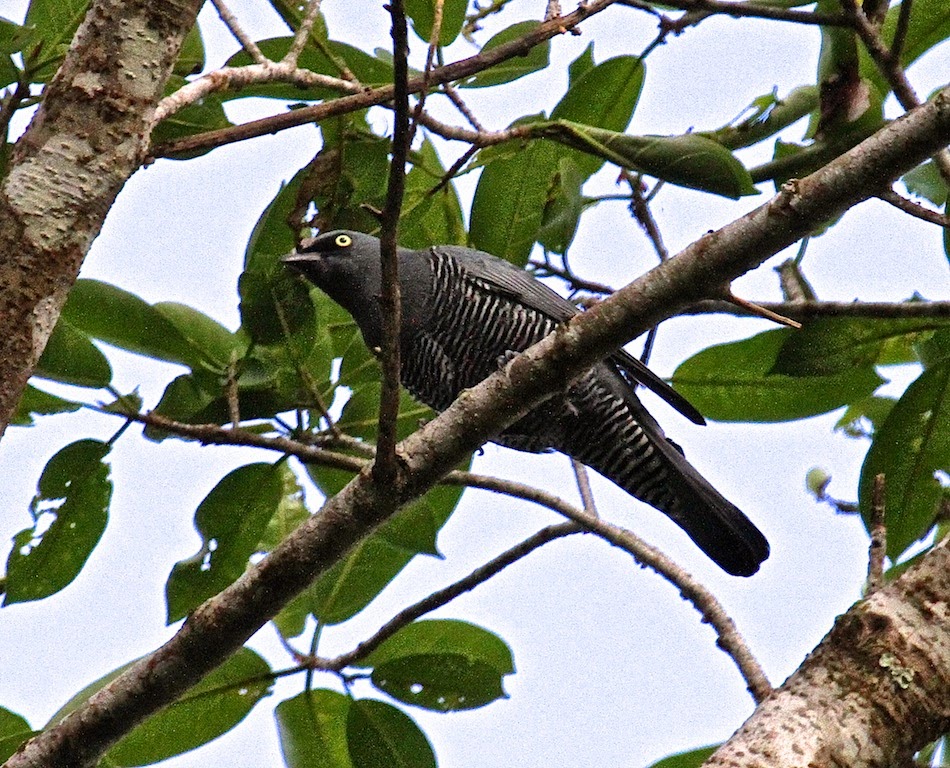 I found this solitary yellow-eyed cuckoo shrike in my large fig tree. There is no fruit on the tree at the moment but the bird seemed quite happy, protected somewhat from the constant rain by the canopy of the fig. 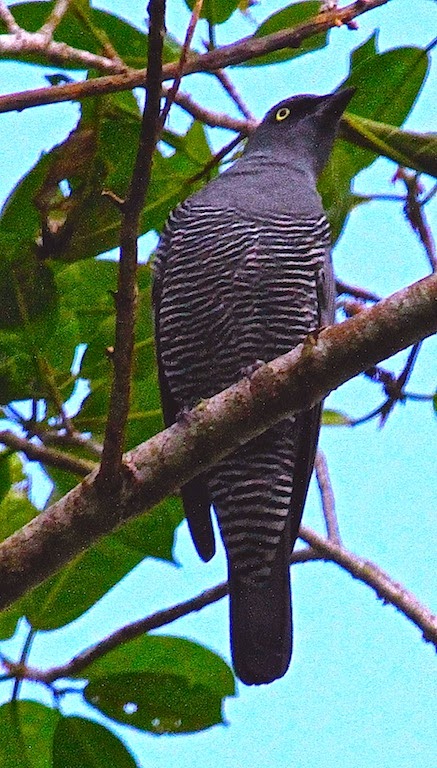 The next morning when the sun came out, for a very short while, I found the cuckoo shrike was still in the tree. 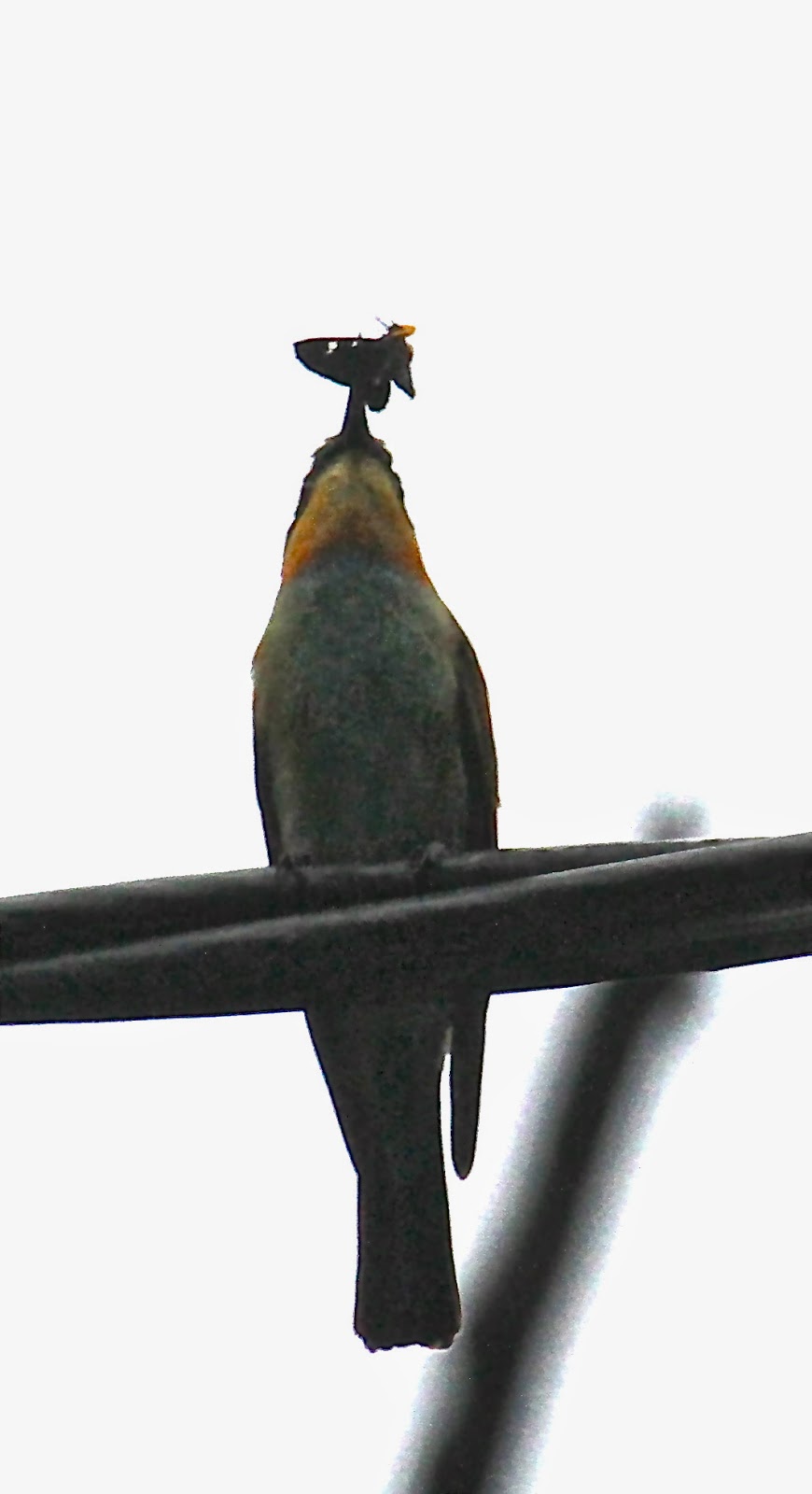 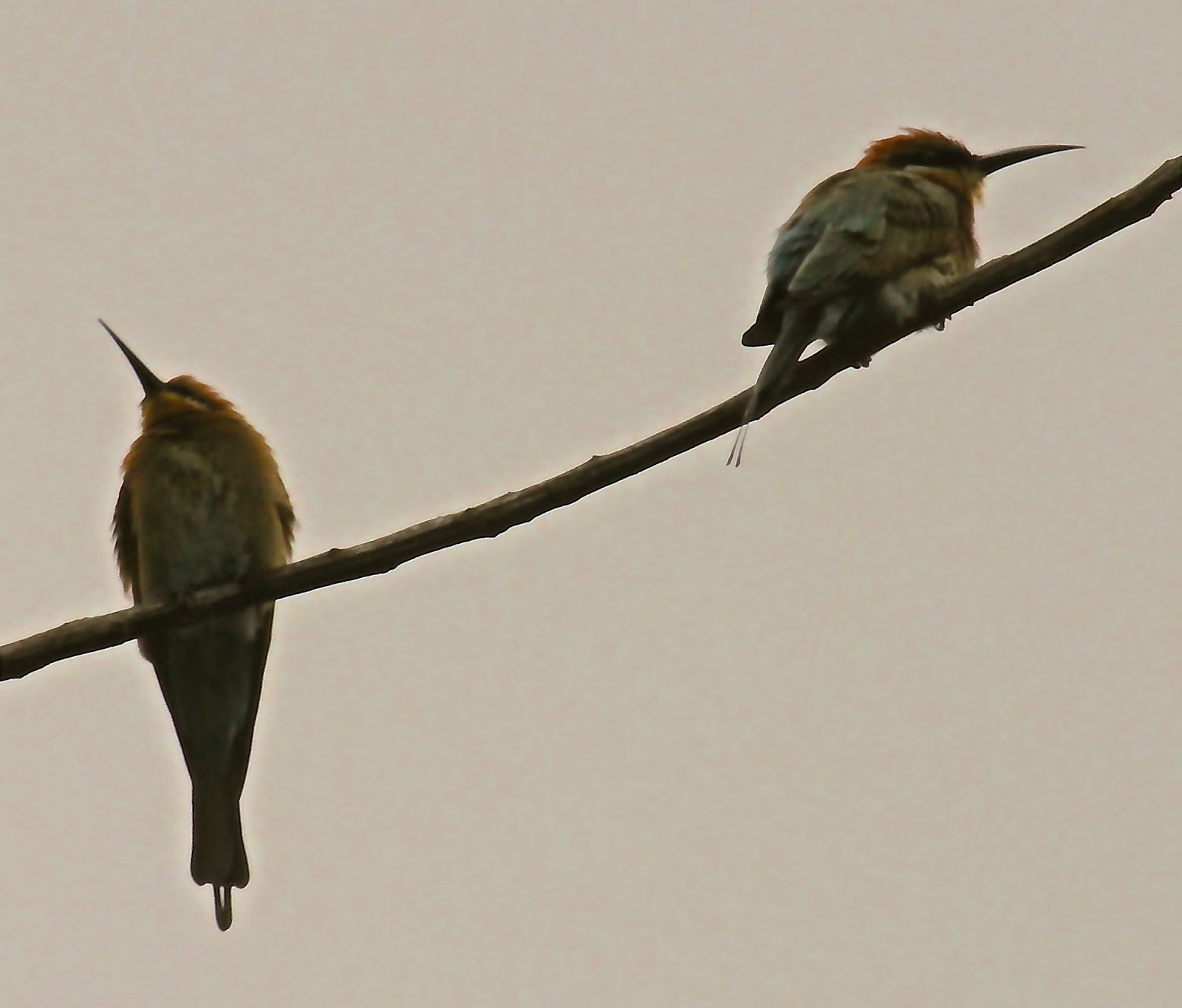 These are not generally solitary birds, when not breeding, so this bird may have been separated from its flock in the gale force winds of cyclone Ita last week.

On Thursday cuckoo shrike was gone.


The wet and windy weather is tough on many birds and the rainbow bee eaters seemed to struggle to catch a feed as their sodden feathers reduced their normal agility. 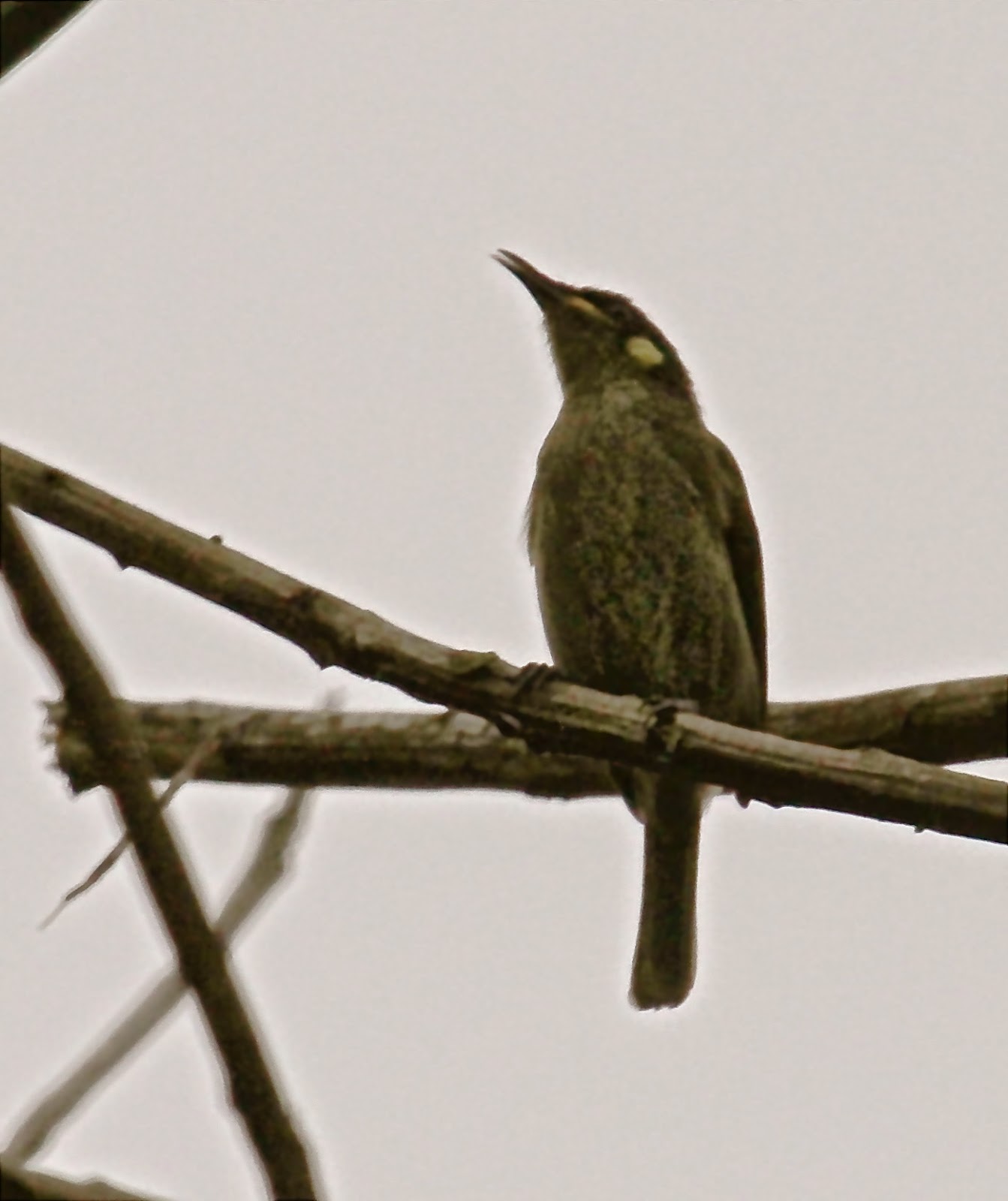 The yelbow spotted honey eater sounded particularly unhappy as there was no food for him this week with the constant rain washing the nectar out of the flowers. 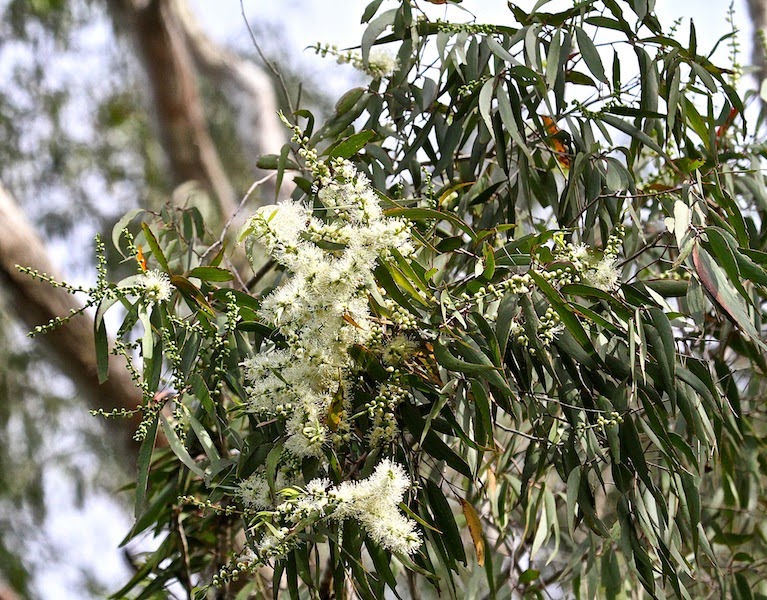 When the paperbark trees Melaleuca leucadendra opened its flowers to the bright sun this morning
there was a flurry of feeding. 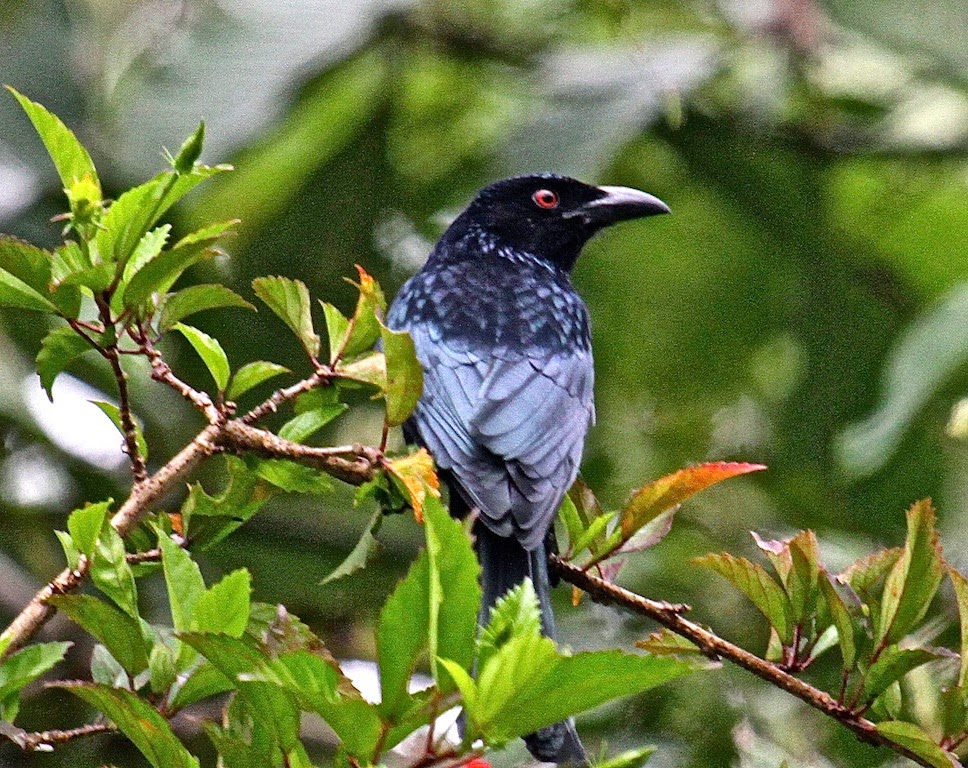 The first to feast where the Drongos, drinking deeply on the pungent nectar before enjoying the warm sun on their feathers. 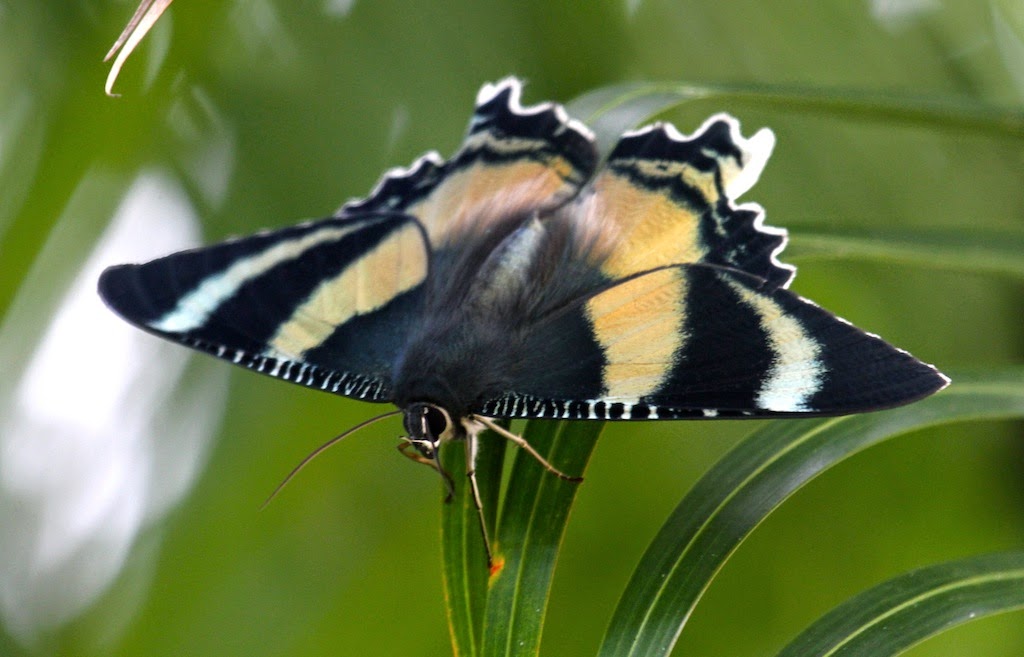 Dozens of Zodiac moths have suddenly appeared, feasting on the melaleuca flowers. Once fed they rest on the understory foliage. They appear perfectly formed, perhaps newly hatched, their wings glistening in iridescent blue, yellow, pink and black, all perfectly outlined with a white zig zig margin. 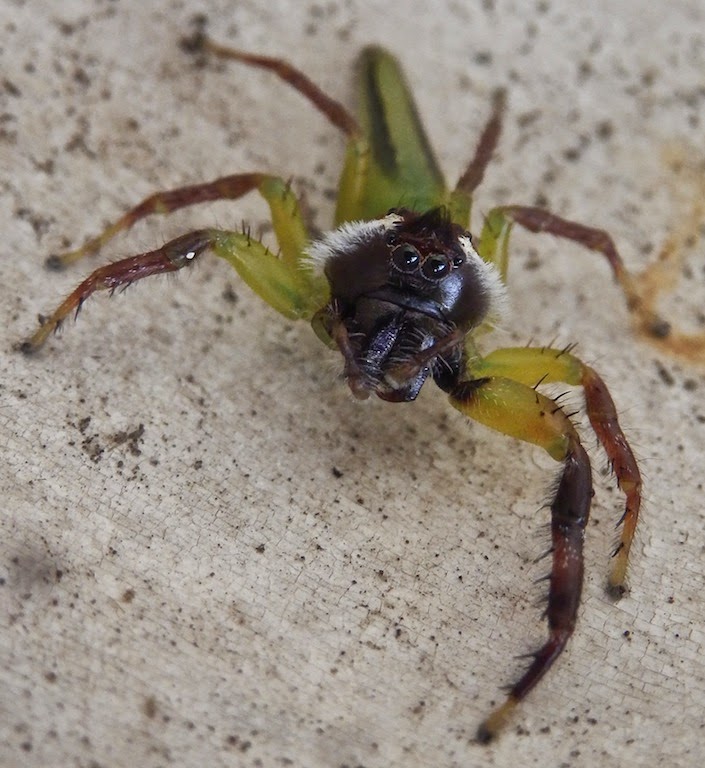 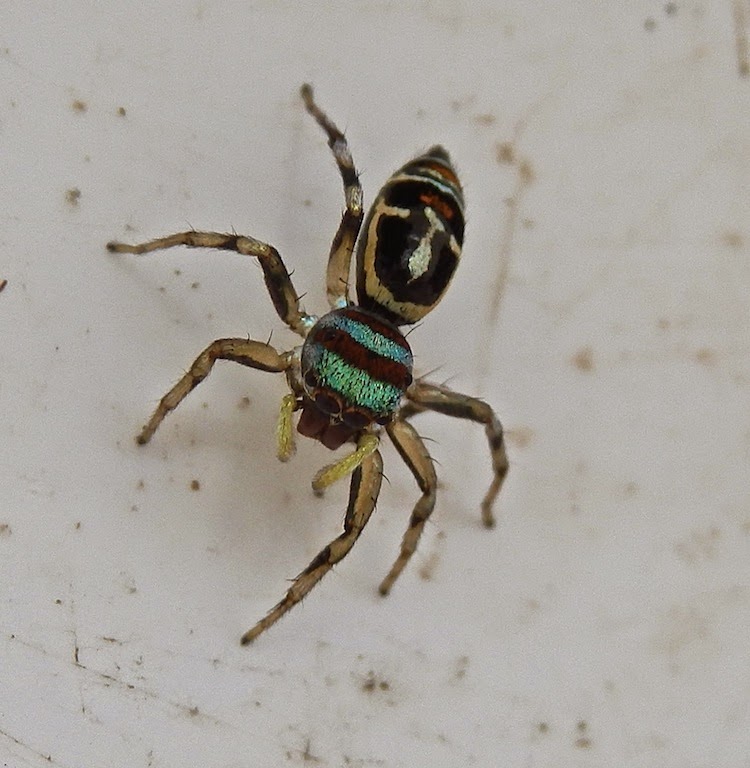 Many jumping spiders are still active especially Mopsus mormon, I found this male, left, dangling from a tree over the road.
The brightly coloured little Cosmophasis miearioides above is still active around the melaleuca trees. 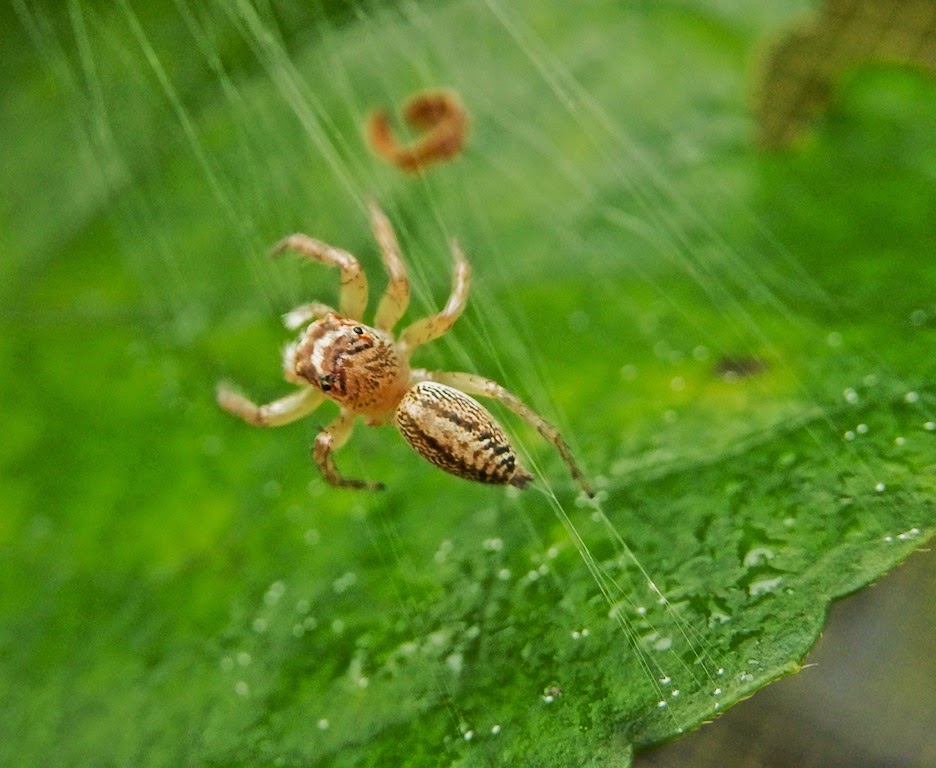 I found  Cytaea xanthopus busily weaving a web in the rain on a hibiscus shrub. 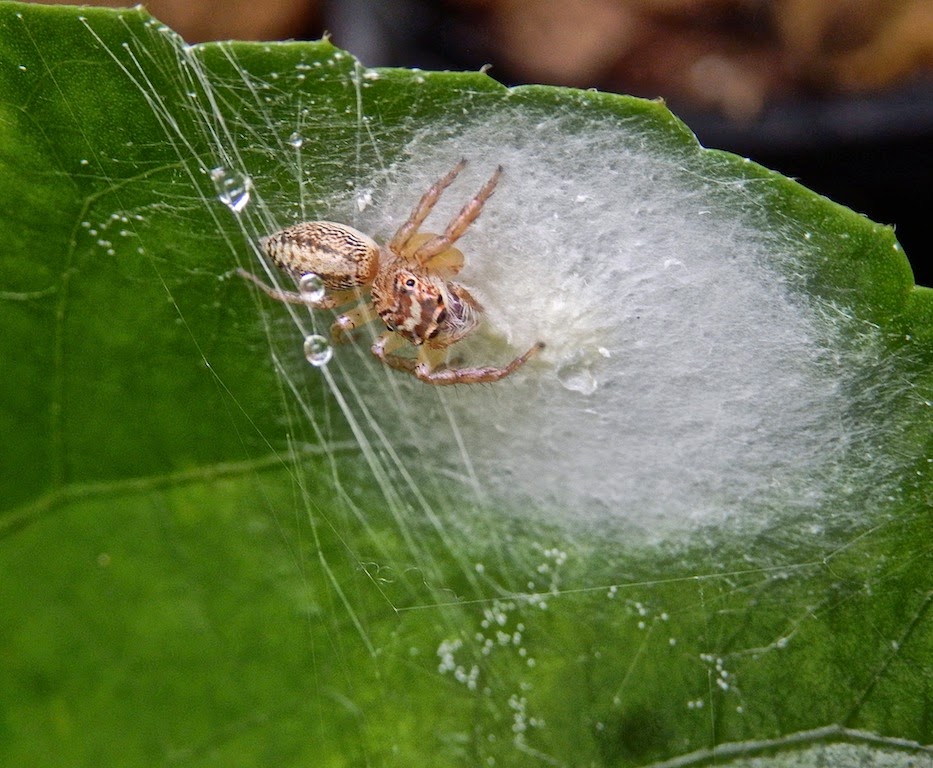 Soon she built a nest retreat at the base of the web. Jumping spiders do not build webs to catch food but only to secure a retreat. Most jumping spiders build retreats in which to hibernate over winter.


She returned to the web and travelling upside down she pulled the sides of the hibiscus leaf together as she spun out the silken threads. 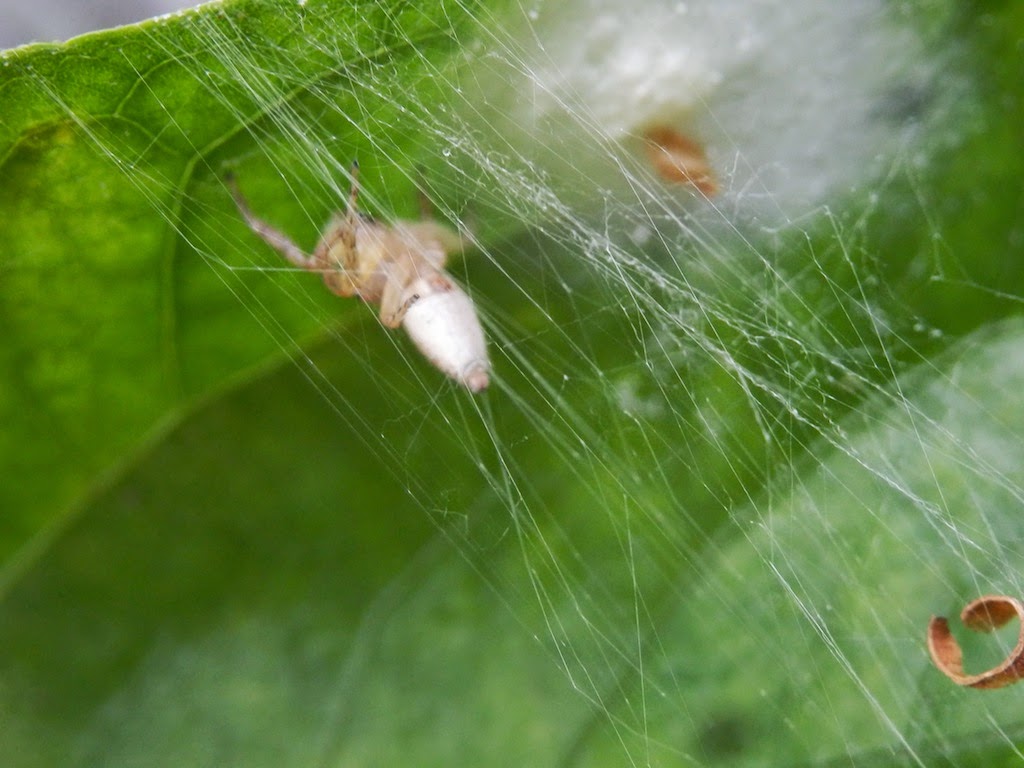 Late in the afternoon she found shelter in the gossamer home she had constructed. The silken threads forming a secure cover over her retreat. 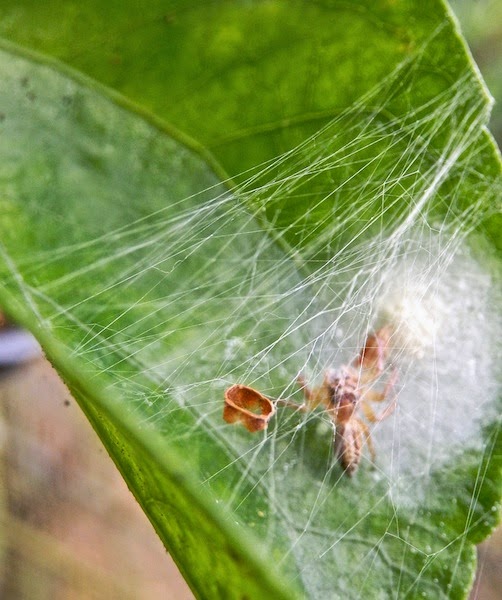 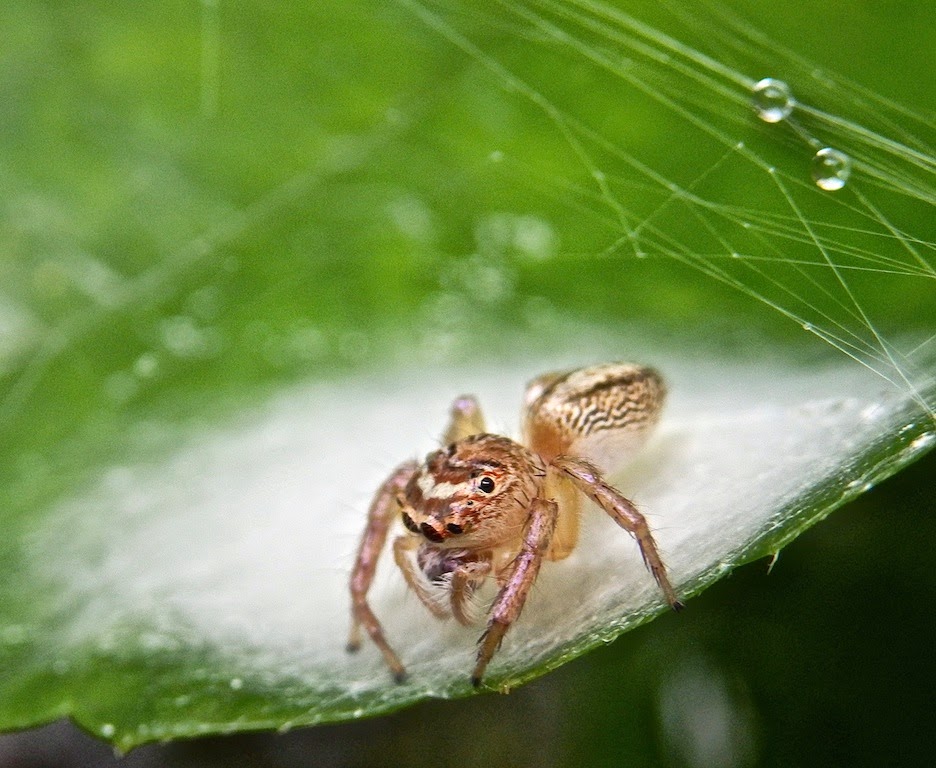 Today in the sunshine she was out and about making finishing touches to her dwelling. I did not see her hunt or eat at any time over the last four days while she constructed this retreat. 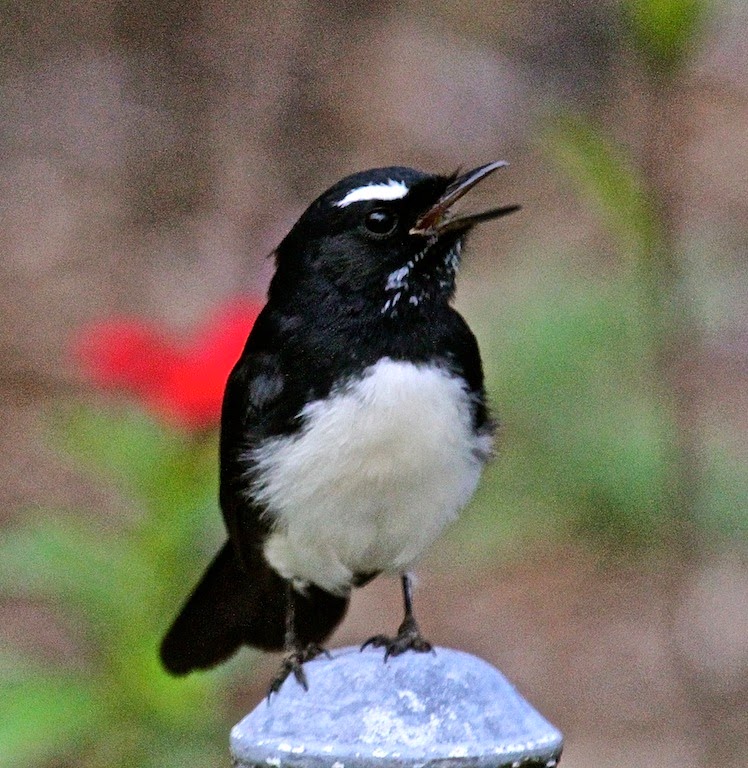 With the end, we hope, of the wet season it is time to start planting the vegetable garden and Willie Wagtail has turned up to balance out the caterpillars and other insects that like to share my cabbages.


In many areas of Papua New Guinea, where this bird also occurs, the Willie Wagtail is regarded as a sign of good luck. I hope a Willie wagtail turns up in your garden to sing you a good luck song. 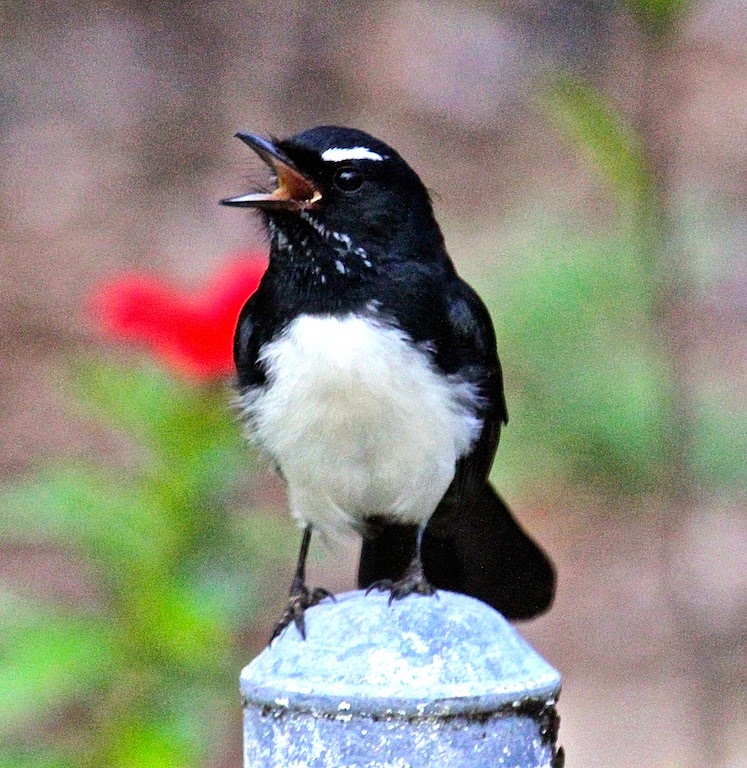