Cyclone Ita crossed the coast last night at Cape Flattery as a cat 4 system and quickly lost strength. Ita's path took it close to Cooktown and Hopevale and damage to buildings has occurred in these areas.
Subsequently, Ita has weakened to a cat 1 system as it continues to head south bringing gale force winds and high rainfall over a wide area of FNQ.

The Bureau of Meteorology's track map shows Cyclone Ita will move over the Cassowary Coast tonight and we can expect to experience strengthening gale force winds for the duration. Cyclone Ita is expected to cross the coast over Innisfail tonight and head out to sea travelling south along the Queensland coastline, but bringing heavy rain to towns between Cardwell and Prosperine. The  cyclone is expected to weaken as it interacts with an upper level trough. 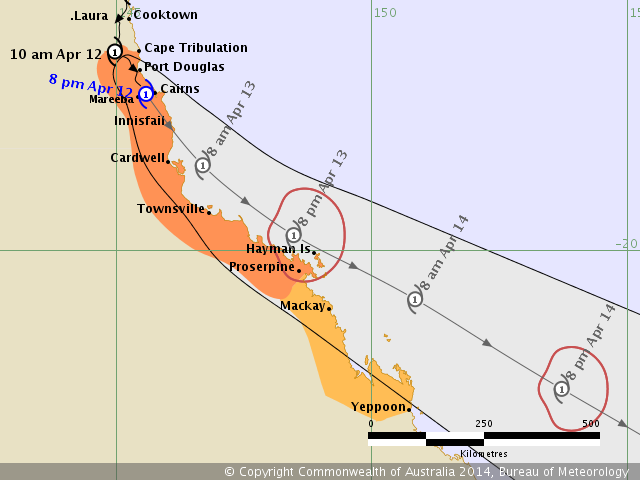 The strong winds have caused massive horticultural crop damage to sugar cane, bananas, tropical fruits and small crops. The Cairns airport was closed yesterday afternoon stranding thousands of tourists and is still not operating fully. The effects of cyclone Ita will be felt by business along all of north Queensland's coastline.

Wild animals are at the mercy of the weather and it was heart rending when Snout and Ky appeared at my back door yesterday. I imagined Snout wanted to come inside away from the wind and rain. 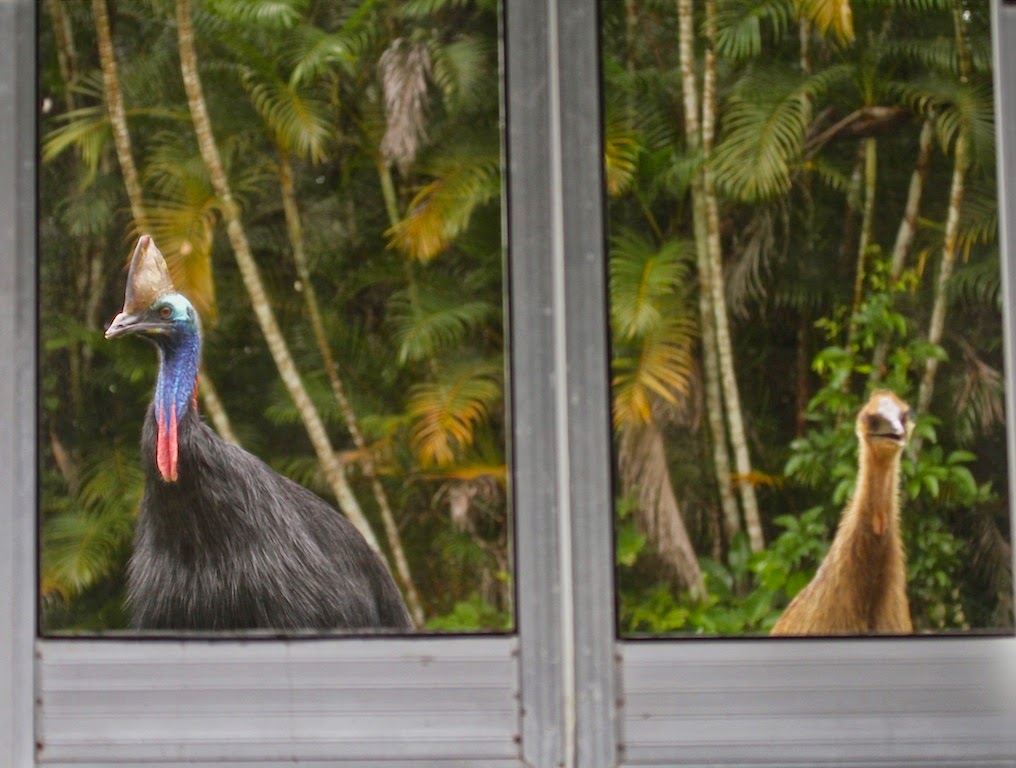 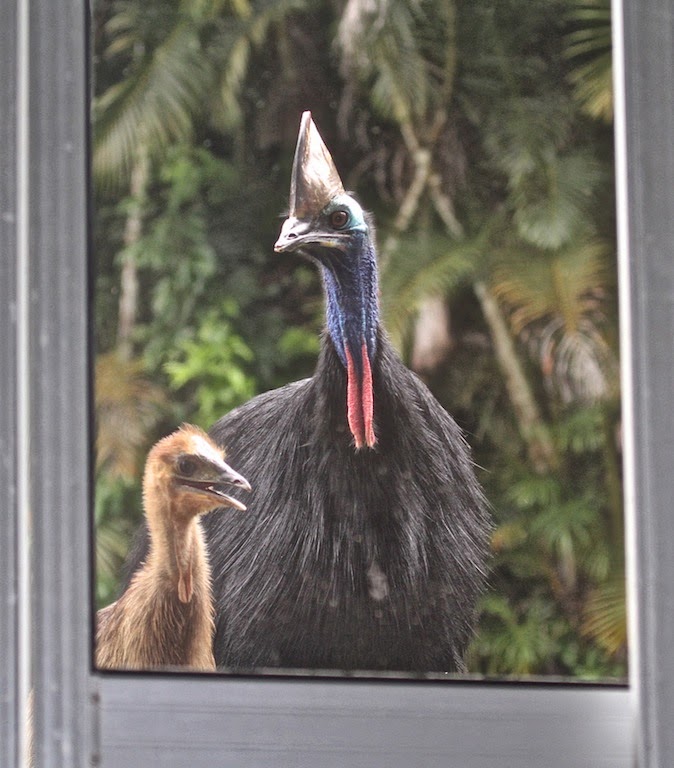 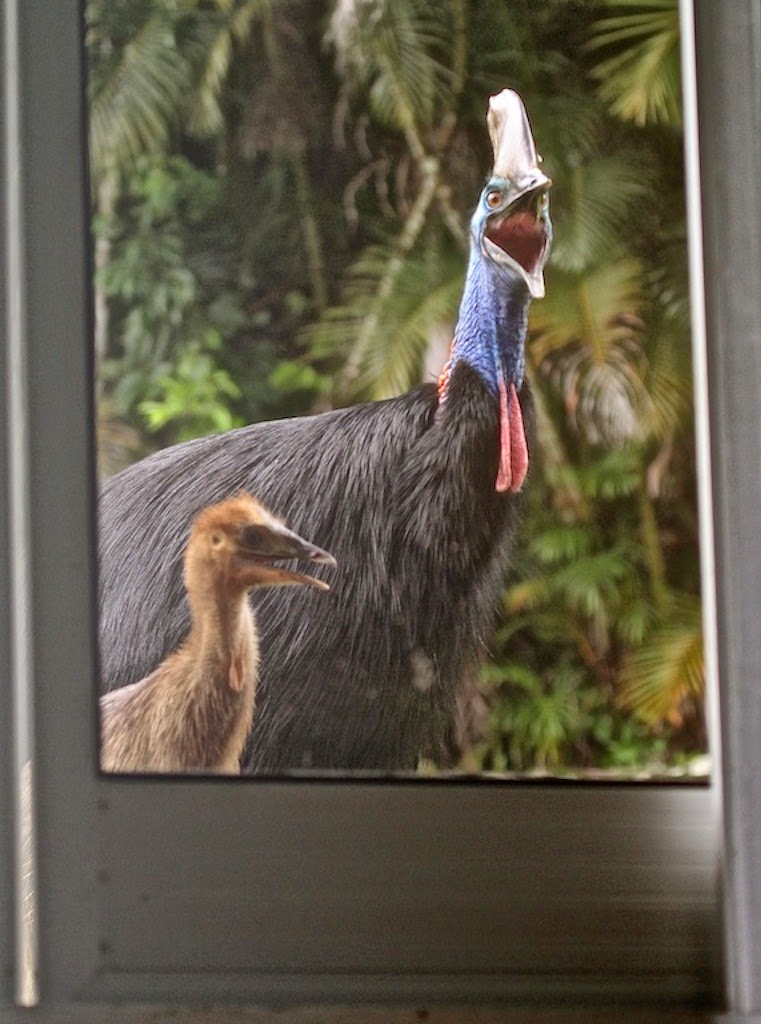 The back door is not normally opened as I am in the nursery throughout the day. Snout and Ky noticed something different and tried to work out what was going on. 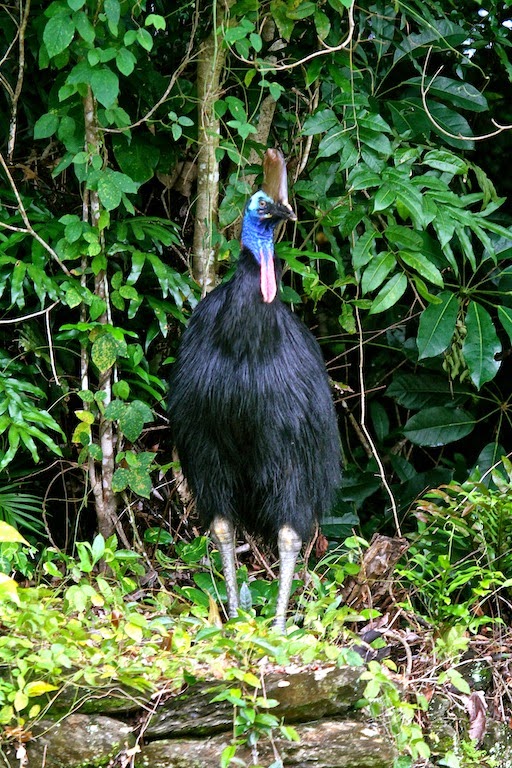 Since a guava has been in fruit close to the house the  cassowaries have been visiting it and I have seen them in the morning eating the fruit fallen during the night. Since I have been in the house the last few days I have noticed them visiting the tree throughout the day.

Today Ky turned up alone and quickly started to eat the fallen fruit, then Snout came out of the forest but at the top of the stone wall, Snout was eager to get to Ky and no doubt the fruit. Meanwhile Ky was happy to eat all the fruit and not worried that Dad was missing. 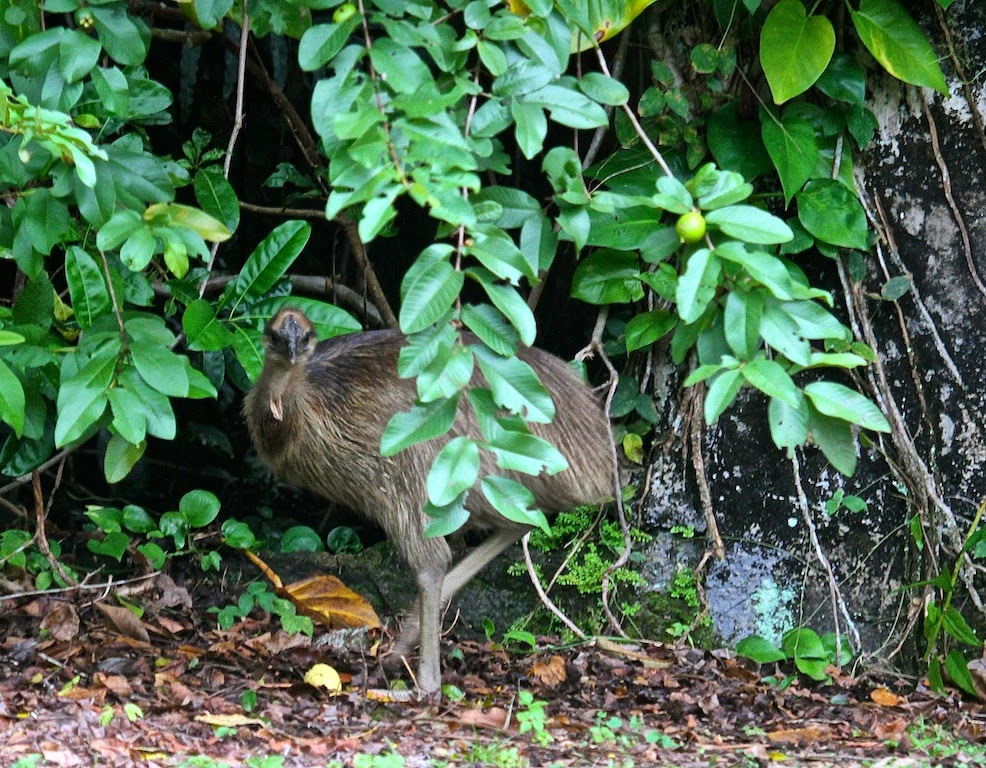 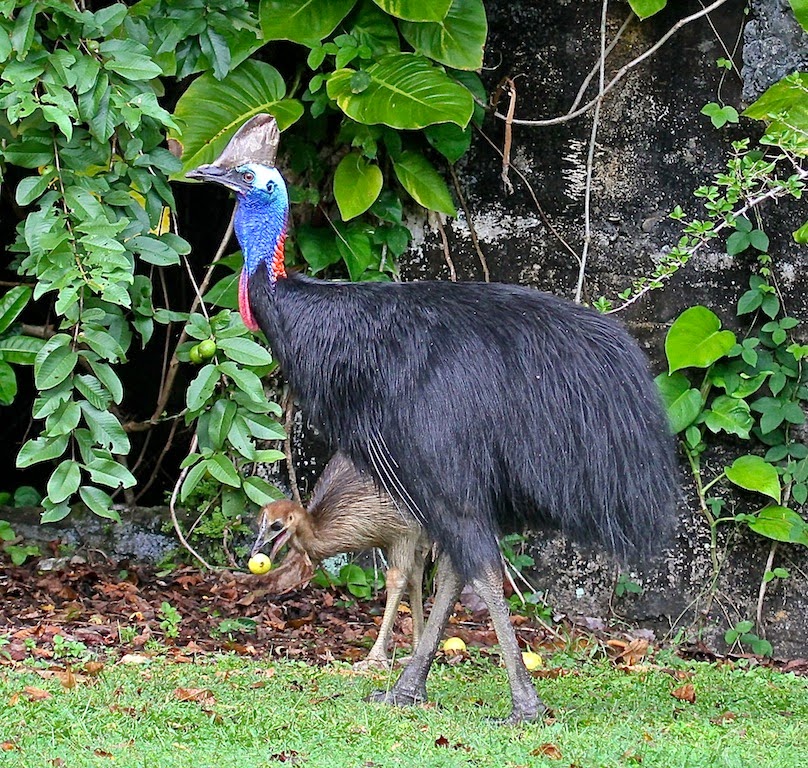 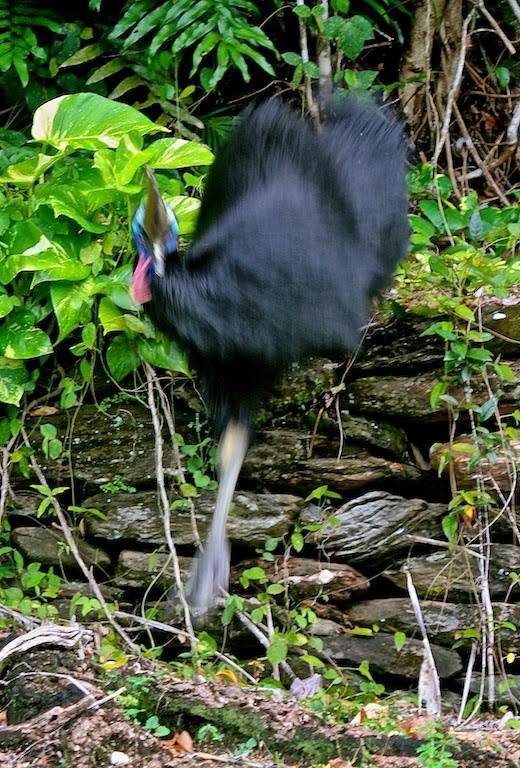 When he joined Ky Snout didn't waste his time in gobbling up the fruit. You can see a quava going down his neck in this photo. 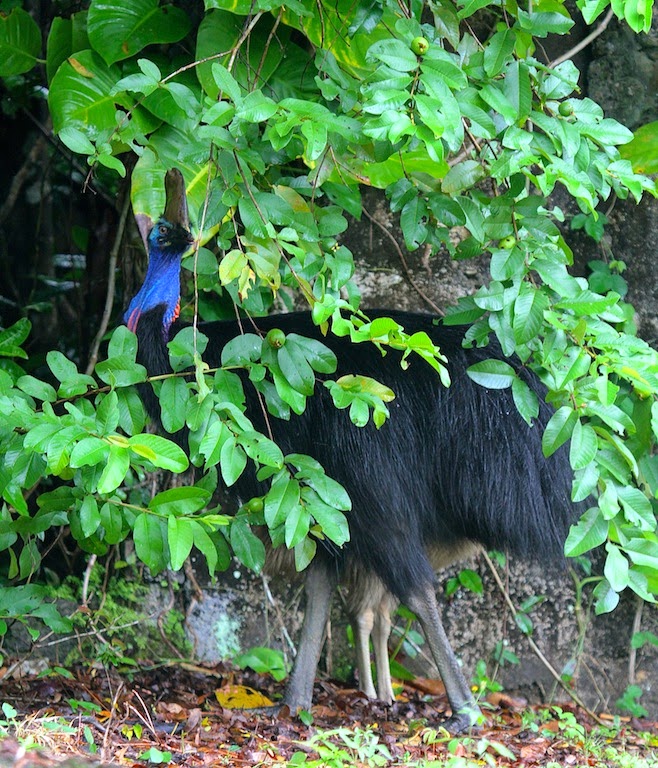 On Monday a flock of at least 150 pied imperial pigeons arrived in the nursery.    They flew in circles around the nursery then plopped down in the tree tops. 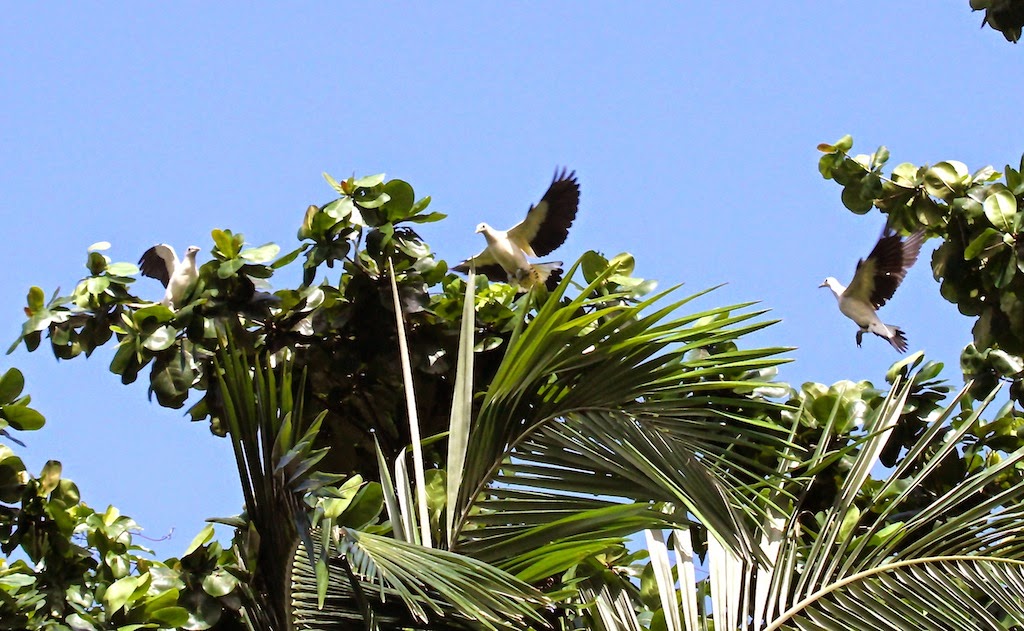 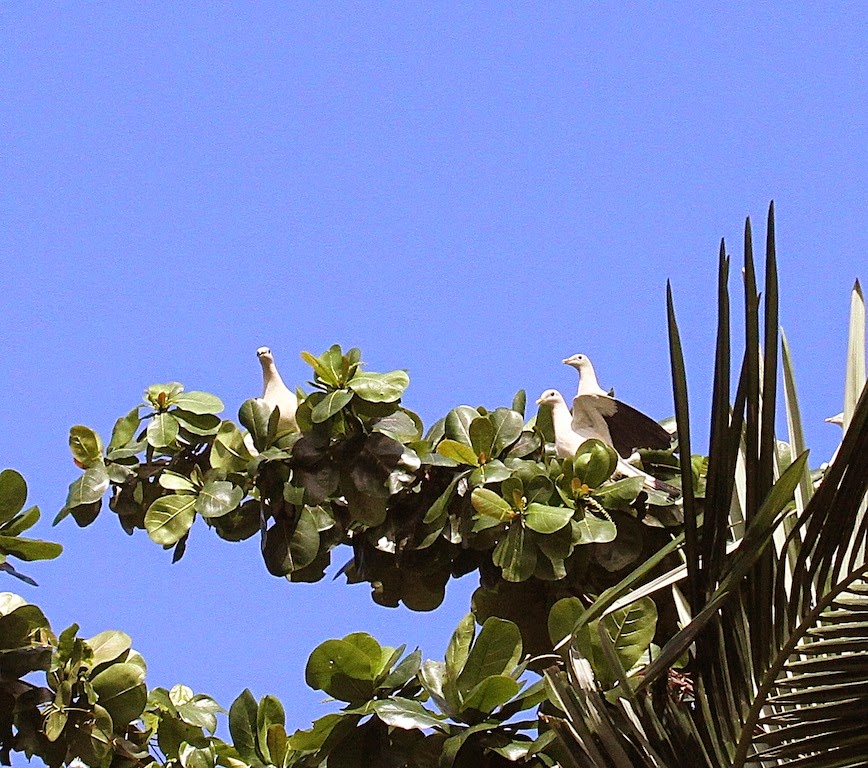 The pigeons covered the tree branches looking like snow on the leaves.

The pied impérial pigeons filled every tree, resting and playing in the tree tops. I did not see them eating although there was ripe fruit on the Alexandrae palms and the white cedar. 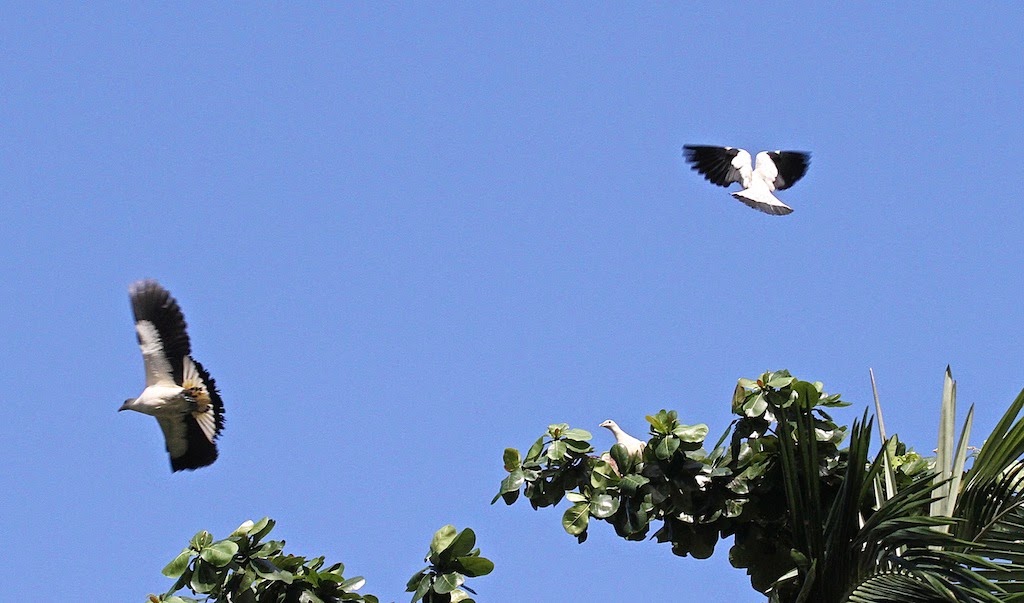 They stayed for about an hour then suddenly left.
Their strong winds lifted into the air and they were gone, heading north. I have no doubt this was a migratory flock leaving for Papua. 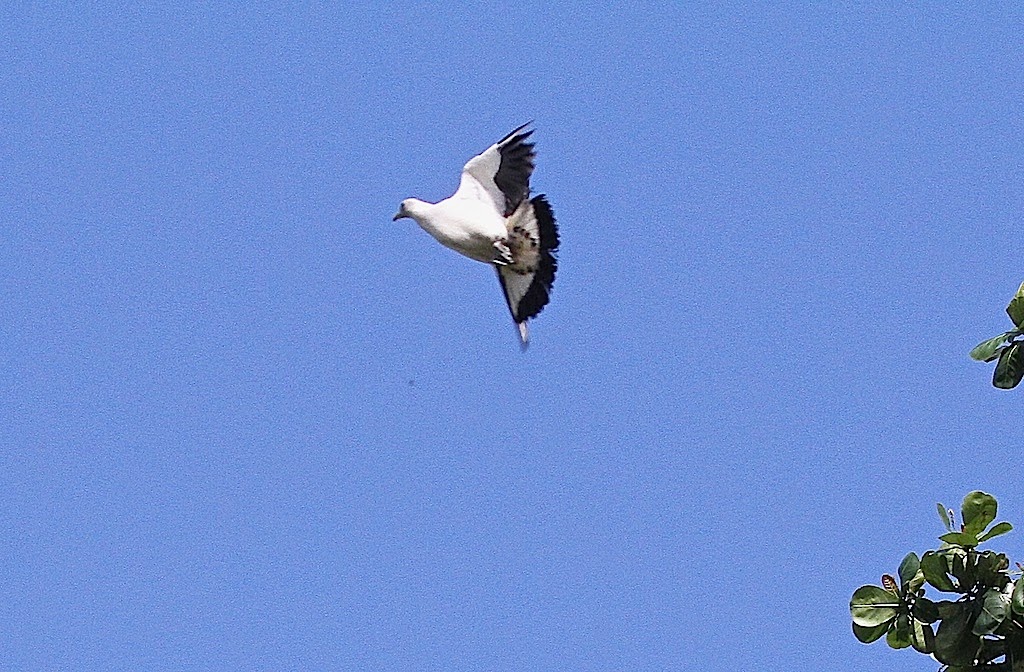 Not all the Pied Imperial Pigeons have left Coquette Point and on Thursday I found an adult bird with two, what looked like, newly fledged chicks, they were enjoying a brief bit of sunshine.

I saw the same three birds this morning feeding on palm fruit but was not quick enough with the camera. 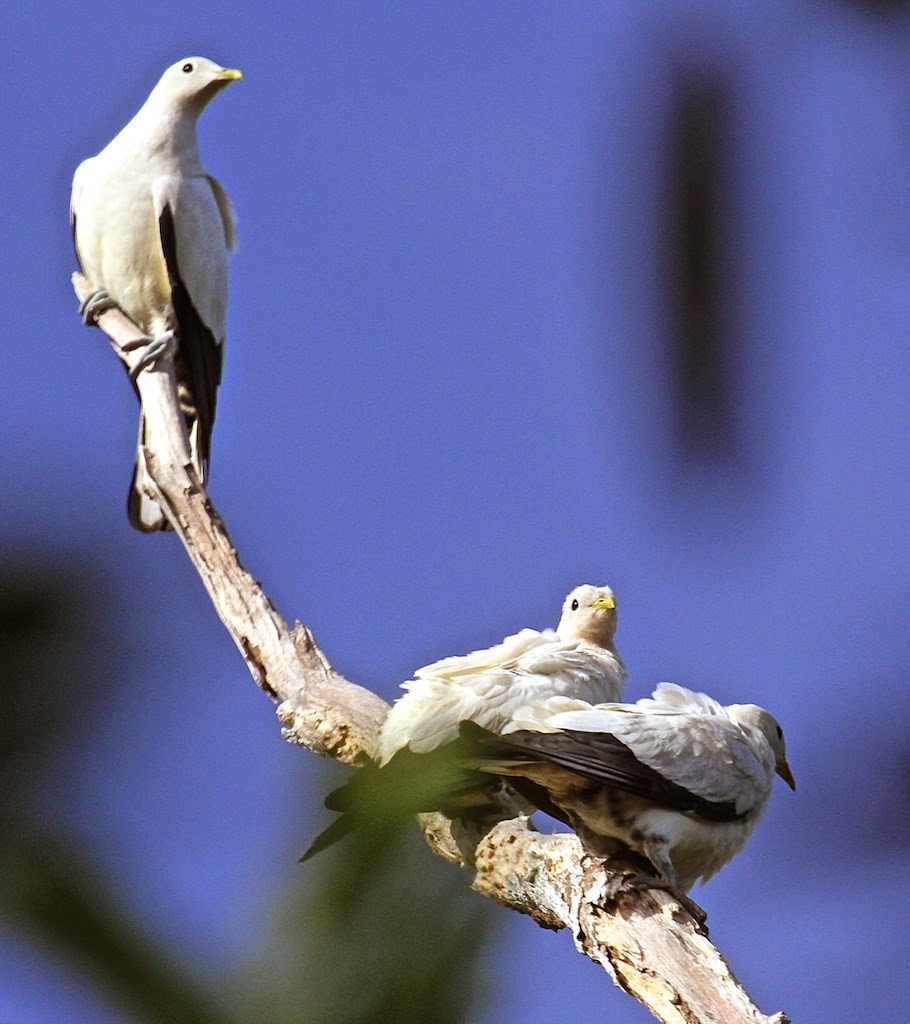 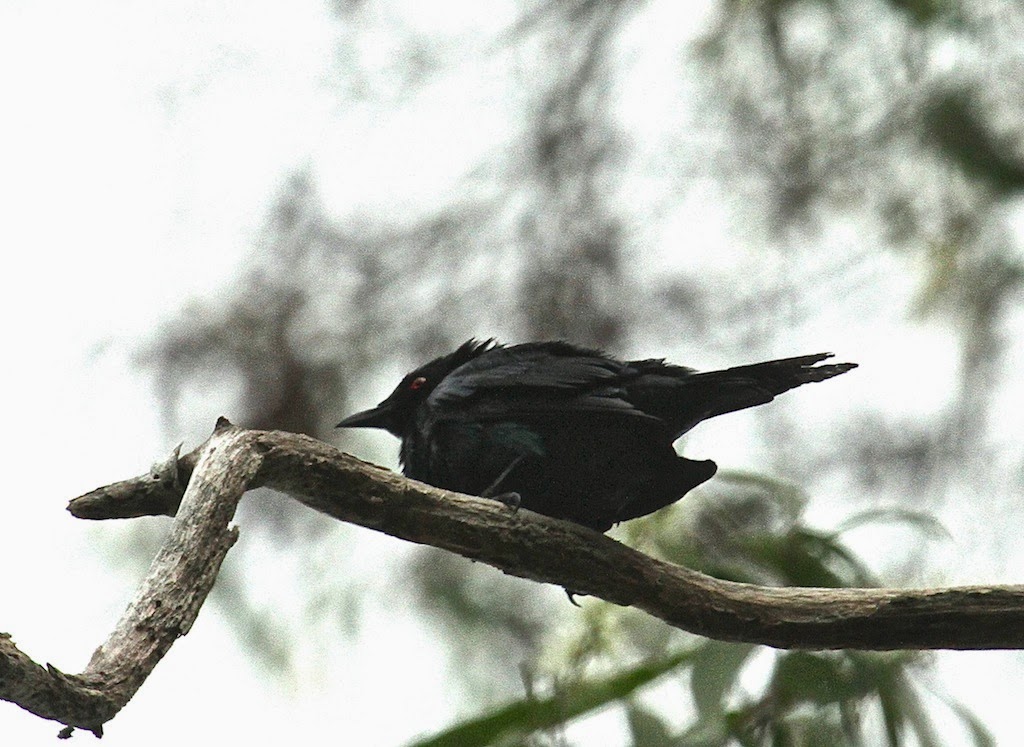 I have not seen any flocks of metallic starlings this week, although a few juveniles are still around.

The spangled drongo is celebrating the starlings departure and all week they have been calling noisily and performing acrobatics through the trees.

Today I found only one drango and he was hanging on to a branch while the wind gusted around him. 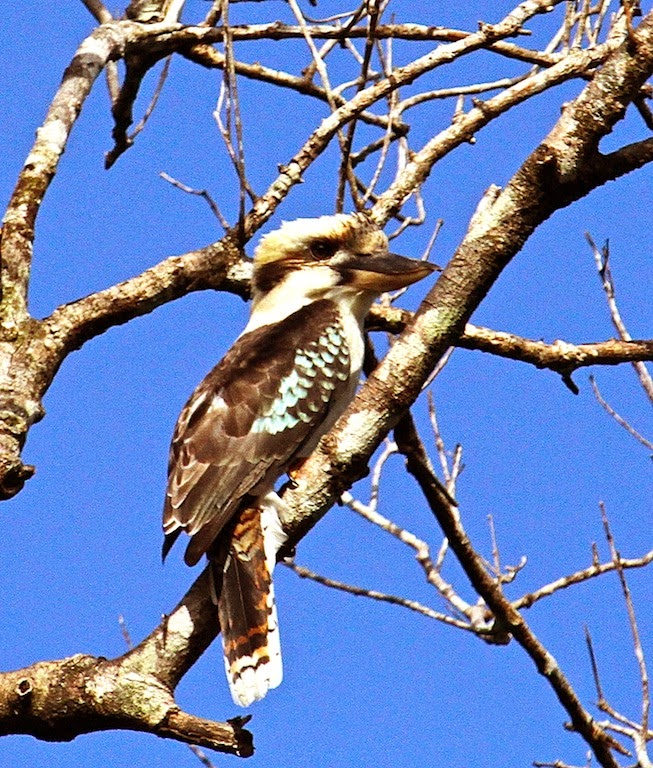 A family of laughing kookaburras arrived early this week and have been singing and marking their territory; five birds on Thursday.  Their happy songs have replaced the noisy chatter of the metallic starlings. Although, they were not heard yesterday or today no doubt they are sheltering from the wind somewhere.


I hope you are warm and dry and that you come through this weather event safely.