A week without rain or wind and at last the Johnstone River is running crystal clear to the Great Barrier Reef. 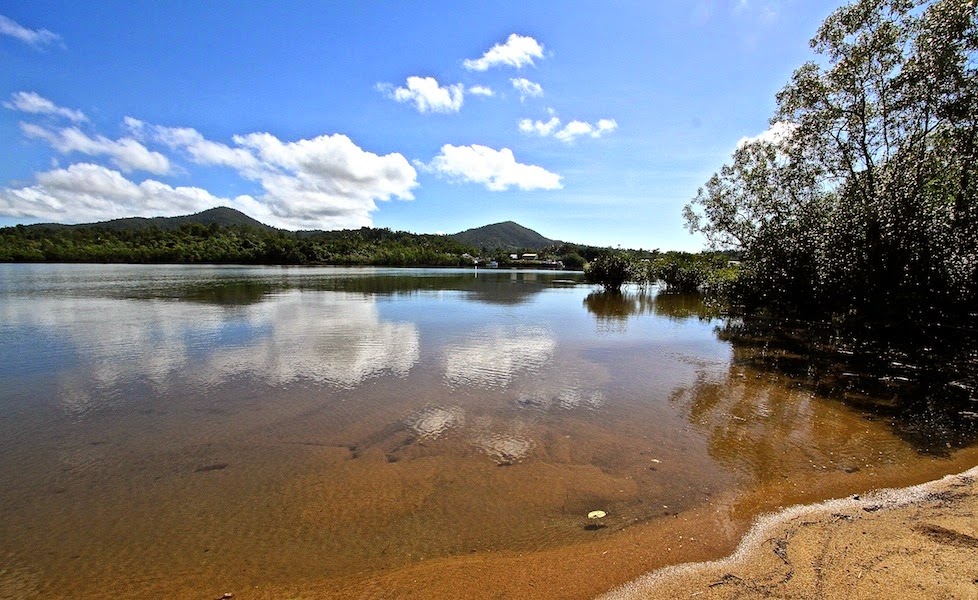 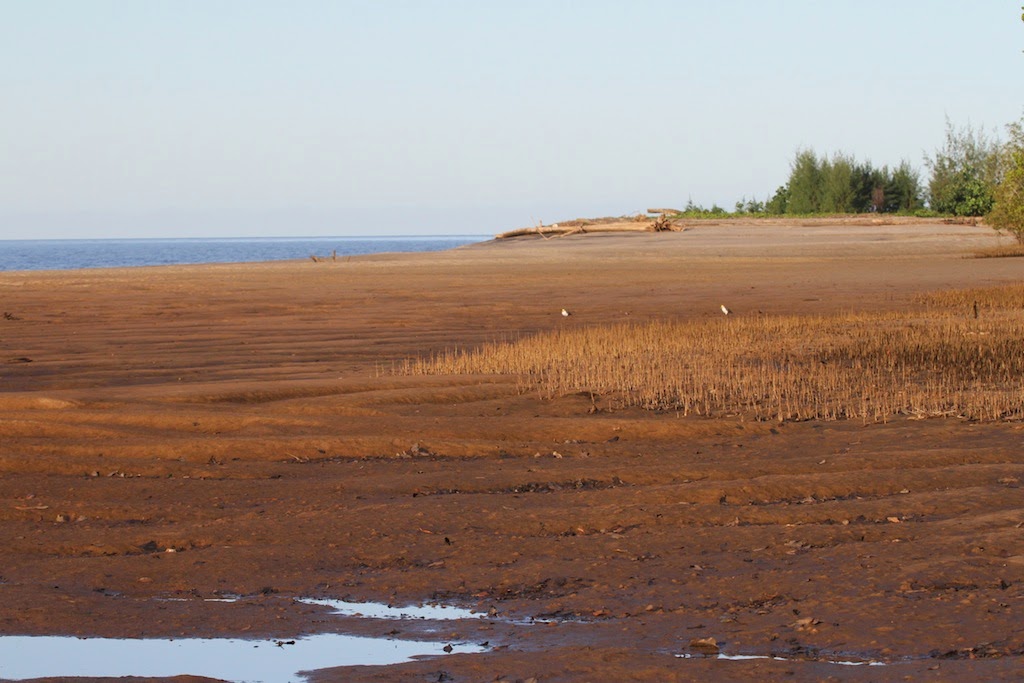 However, at low tide the legacy of the farm run-off waters can be seen in a layer of red, slimy, smelly mud. Where once thousands of crabs filtered the sand now there is a slimy wasteland.

Further around on the beach millions of sand-fleas are active in the leaf detritus washed from the forest. This is an area best to avoid until after these tiny biting crustaceans complete their recycling. 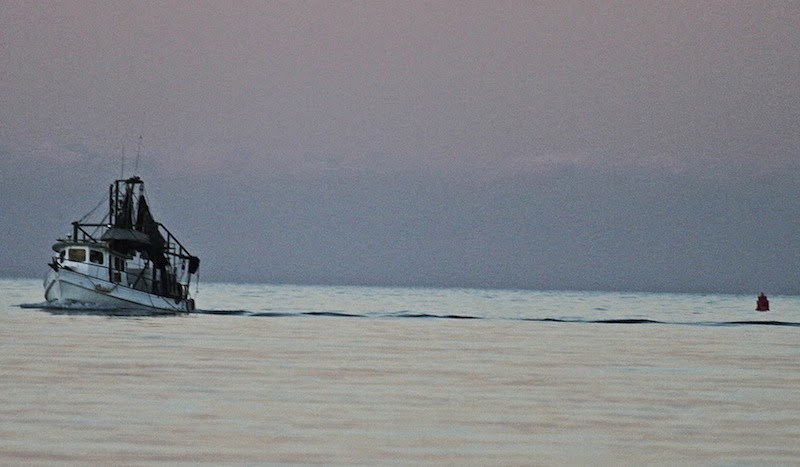 The Innisfail Chamber of Commerce is once again, in Wednesday's Innisfail Advocate, lobbying for the Johnstone River to be dredged. They are asking for ratepayers to contribute to an Economic Benefits Assessment (EBA) to lend weight to the decision on a feasibility study to be funded by state-taxpayers and local-ratepayers. I don't know how much the feasibility study will cost but the quote for the EBA is $12000, of which CCRC ratepayers are being asked to contribute $6000.

On Thursday evening with a low tide of 0.91 metres, (an average low tide), I photographed this fishing trawler motoring in the channel at the bottom of the tide. Most pleasure craft draw less water than this trawler; so is there a need at all for dredging?

The Johnstone River was dredged in the past when it was a commercial port for bag sugar. During neap tides there was insufficient water for the sugar lighters. However, pleasure boats have much more flexibility and they can always use Mourilyan Harbour. In fact Mourilyan Harbour is a far better Port for pleasure craft as it is closer to the reef. At Mourilyan a boat is at anchorage within minutes instead of having to motor for another half an hour up a narrow river channel.

The State Minister for Transport and Main Roads, Scott Emerson previously said. "Given the limited funds available for recreational boating infrastructure, (it) cannot be justified to dredge the Johnstone River."

Minister Emerson understands that dredging the Johnstone River would never be a one-off event. In fact the bar would need to be repeatedly dredged after every extreme weather event. Minister Emerson knows that the bar at the mouth of the Johnstone River is a result of the long-shore northward drift of sand which piles up on the southern sides of headlands and river mouths like the Johnstone. Adding to this sand is the eroded alluvium that is being naturally carried down from the Tableland areas and deposited in the river and at the river mouth. In addition, soil carried from farm lands in rain events, is adding to the sediment load along the full length of the river.

Why is the Innisfail Chamber of Commerce asking for more money to be wasted on studies: can't they understand the history of the Johnstone River? 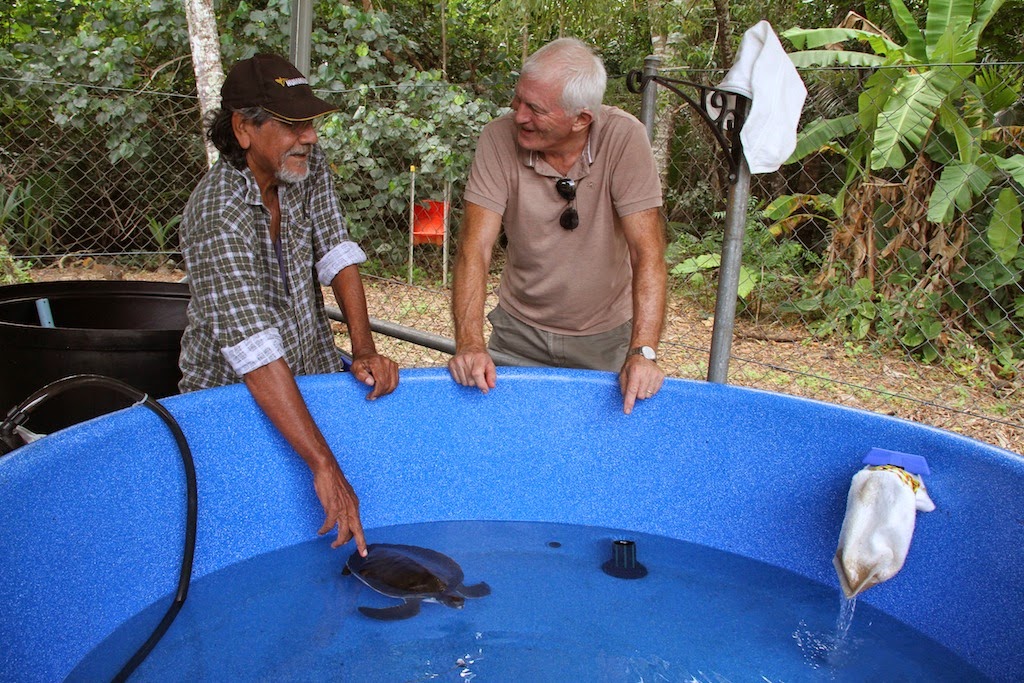 Little Slaty is stronger and with great excitement Nellie told me he had his first bowel movement on Thursday.

Geoff Stapley, who found Slaty on Mission Beach came to see how he was recovering and was delighted to meet, Mandubarra Elder, Henry Epong. They discussed the workings of the Coquette Point Turtle Triage and Rehabilitation Centre. Geoff and Henry chattered on like old mates. 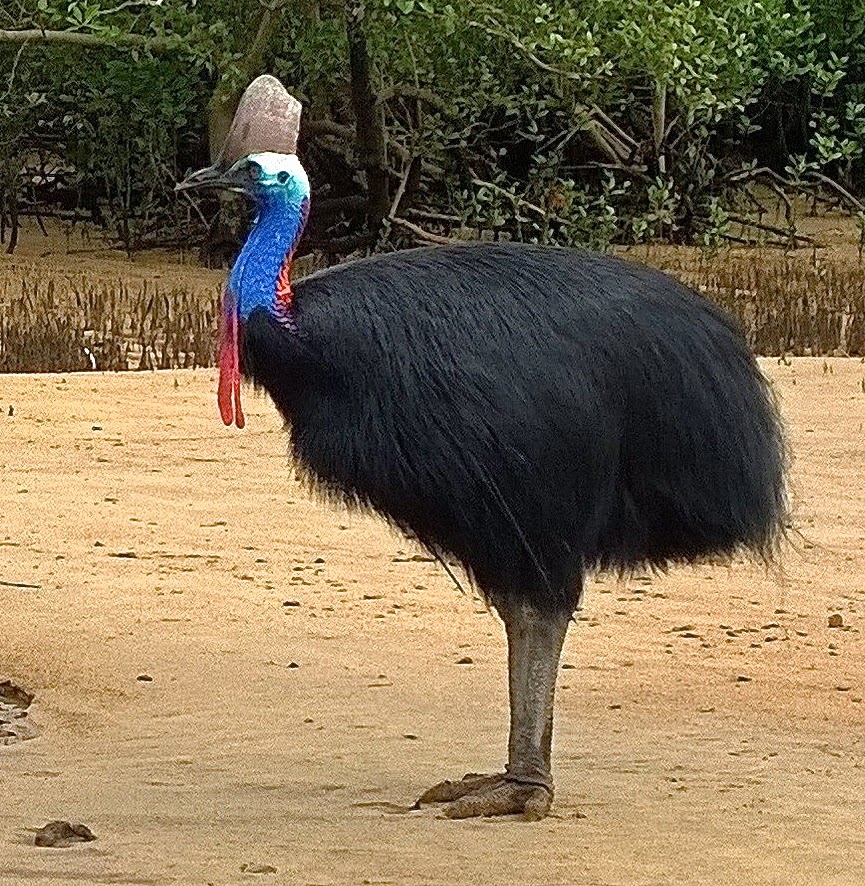 Wendy Sheils of East Innisfail took this photo of matriarch Cassowary Jessie while she was walking on the beach at Coquette Point. Wendy said Jessie was looking for crabs and snails in the mangroves. Jessie showed no aggression and calmly went about her foraging while Wendy watched.

Wendy was very excited by the encounter and asked me to identify the cassowary. Thank you for sharing this photo with us Wendy, Jessie is a star on this blog. 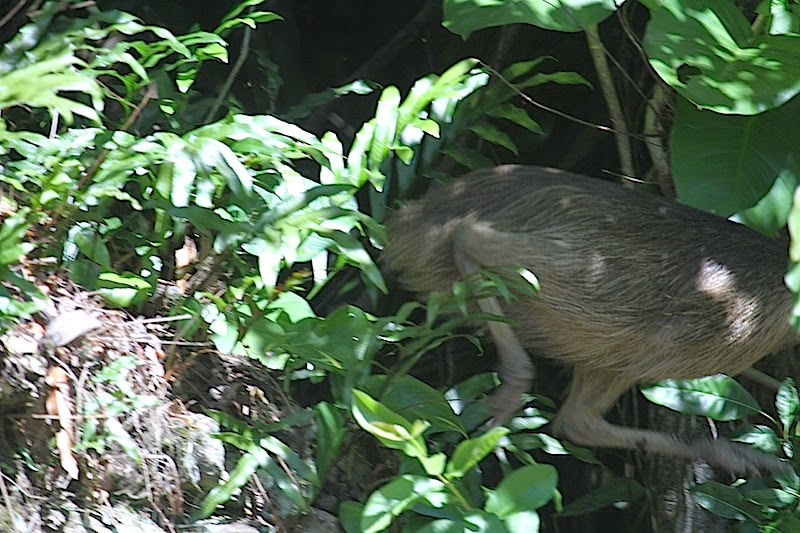 Jessie's mate Snout and chick Ky have been visiting the guava trees every day.
On Wednesday I noticed Ky standing at the top of the wall and Snout below. I rushed for the camera but before I could frame the shot Ky jumped: flying cassowary! The wall is over a metre high.  When Ky landed Snout went straight over to him and I am sure Snout was telling Ky never to jump off walls again; even though Snout did so himself only a couple of weeks before. 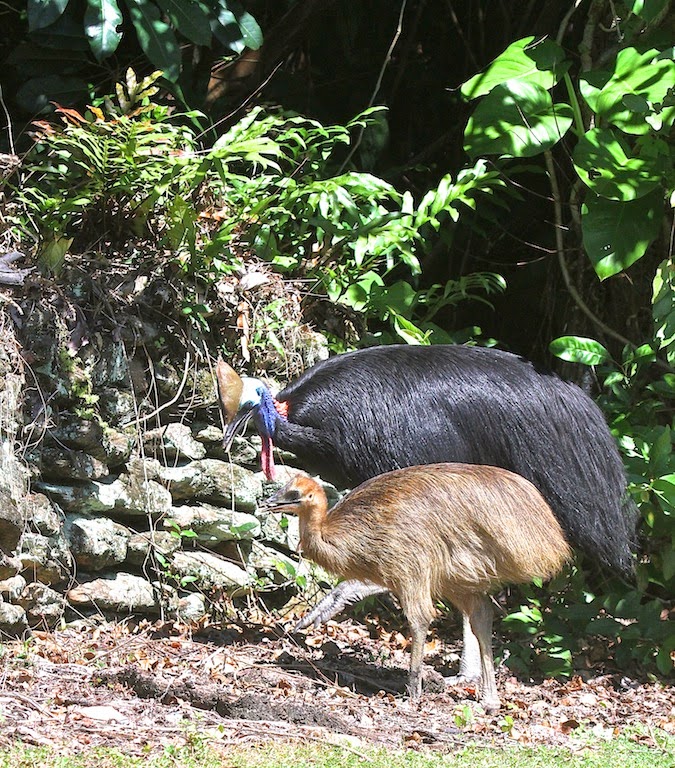 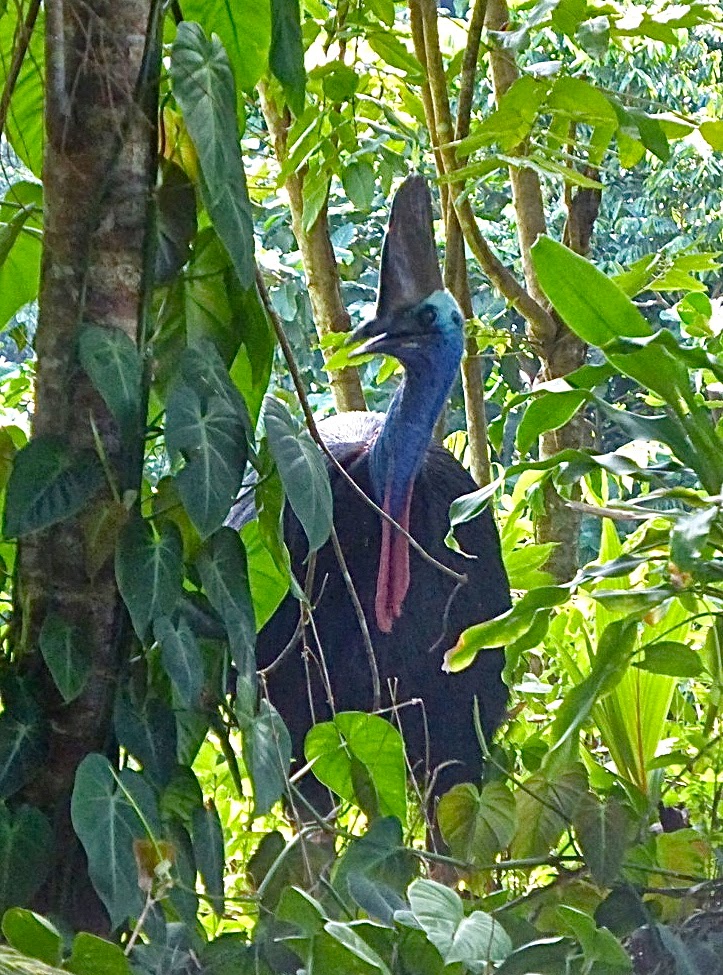 Cowley entomologist Richard Piper saw a cassowary at DPI South Johnstone on Friday. This cassowary has a very large, undamaged casque and long wattles. It is a very impressive looking bird and gauging its size it is possibly a female. It would be interesting to know this bird's range, so if anyone has seen her and taken a photo please upload the information on the comments section of this blog.

Thank you Richard for sharing this photo with us.

I went down to Etty Bay on Thursday, this area is one of nature's special places. Etty Bay is at the southern end of the Moresby Range National Park and is the common range/habitat for Cassowaries from Coquette Point, East Innisfail, Ninds Creek Wetlands and Etty Bay. 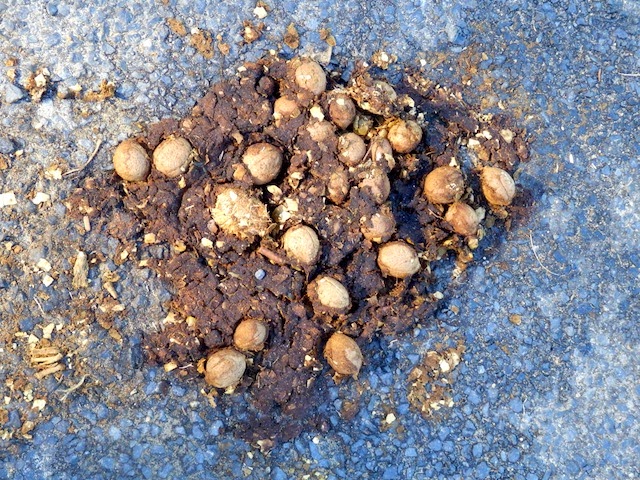 The cassowaries of Etty Bay have become accustomed to people and against advice are often hand fed so I was pleased to see a scat full of beach calophyllum seed, calophyllum inophyllum, but I did not see the Etty Bay cassowaries. 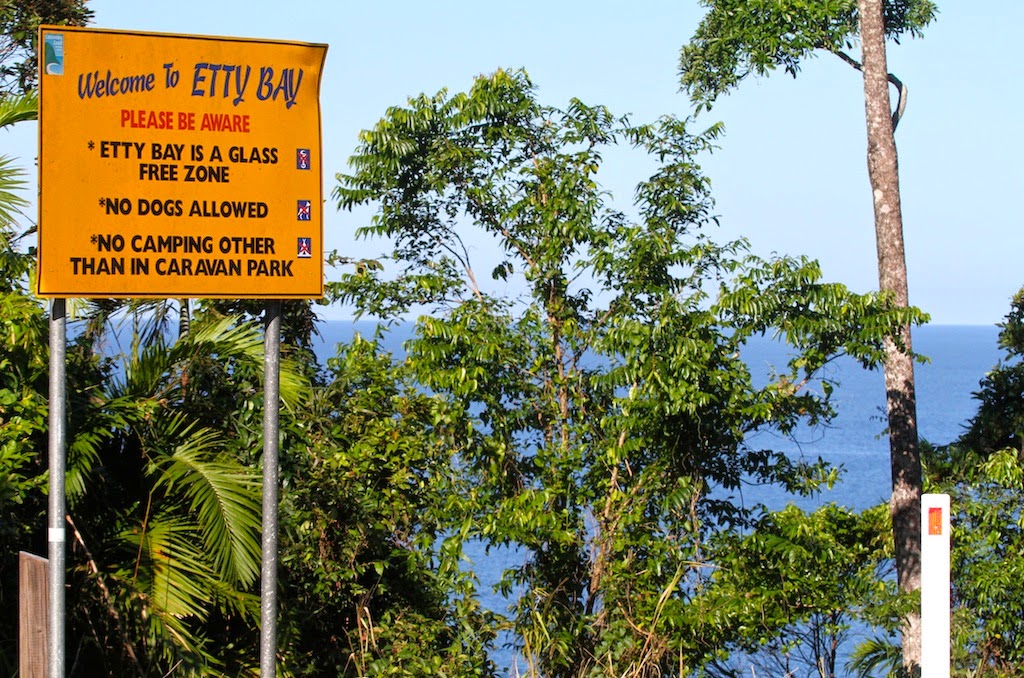 While nature knew no bounds when forming this beautiful Bay, unfortunately, our Council has allowed the public area to become shabby and grubby.

It would be a crime to obscure the beach frontage with structures, as the Council seems to like to do when they 'makeover' recreational areas. However, the Council needs to keep Etty Bay clean of mould and restore the recreation area with clean sand and grass.

Whoever designed the sign to Etty Bay could never have visited the area. What a welcome-mat to tourists!

The Cassowary Coast Regional Council area abounds in natural assets, when we interfere with nature's beauty we need to ensure that we do not destroy the aesthetic values that make the area so special. At the moment we are not doing a very good job and people wonder why tourists don't stop here?

Every morning the black cockatoos fly down the Johnstone River from their roosting trees in Central Innisfail, on their way to Flying fish Point and Coquette Point. 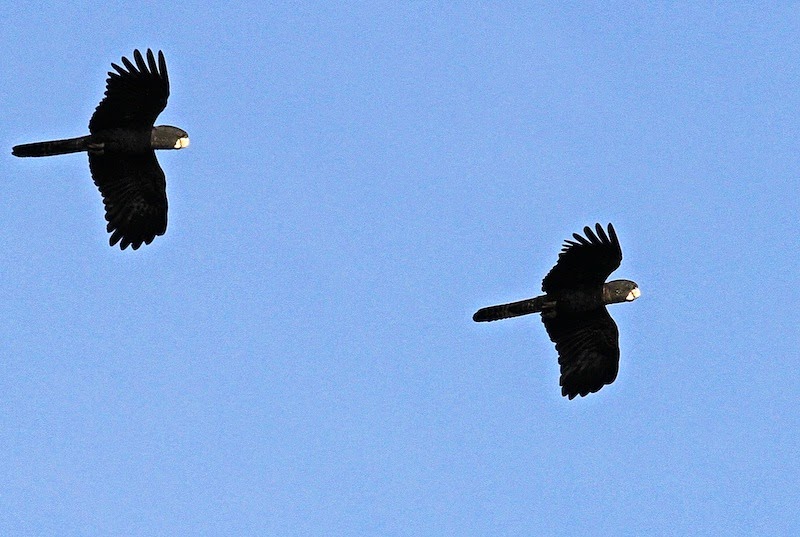 Every afternoon the black cockatoos return to town having feasted on the beach almond, terminalia arenicola and the beach calophyllums.
Once these birds were uncommon visitors to the coast, however, since the drought in western Queensland a number of black cockatoos seemed to have moved permanently to the coast.

Their noisy chatter now marks the beginning and close of every day. 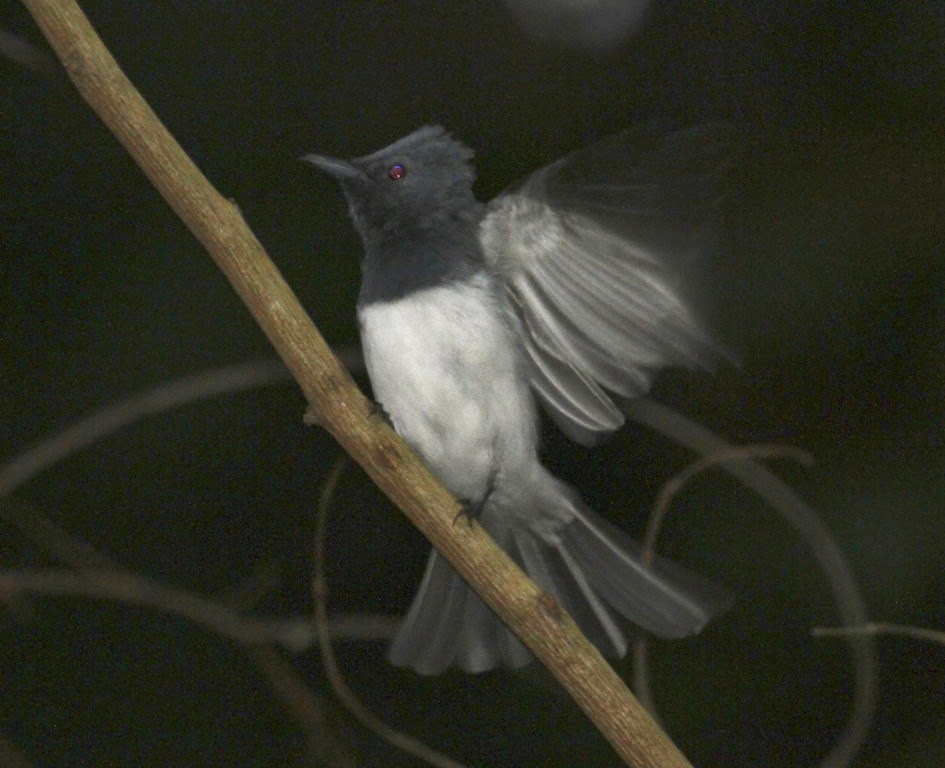 The little leaden flycatcher has a call like tinkling bells which he halts with a rasping scowl.

Marking ones territory is always a problem for migratory birds and when a new arrival tried to move in this week the now resident leaden flycatcher put on a real display.

I, of course, do not know which bird won but the climax came, following much singing and wing display, in a downward swoop that did not appear to hurt the other bird. The defeated bird quickly departed. It happened late in the afternoon, 5.30pm. 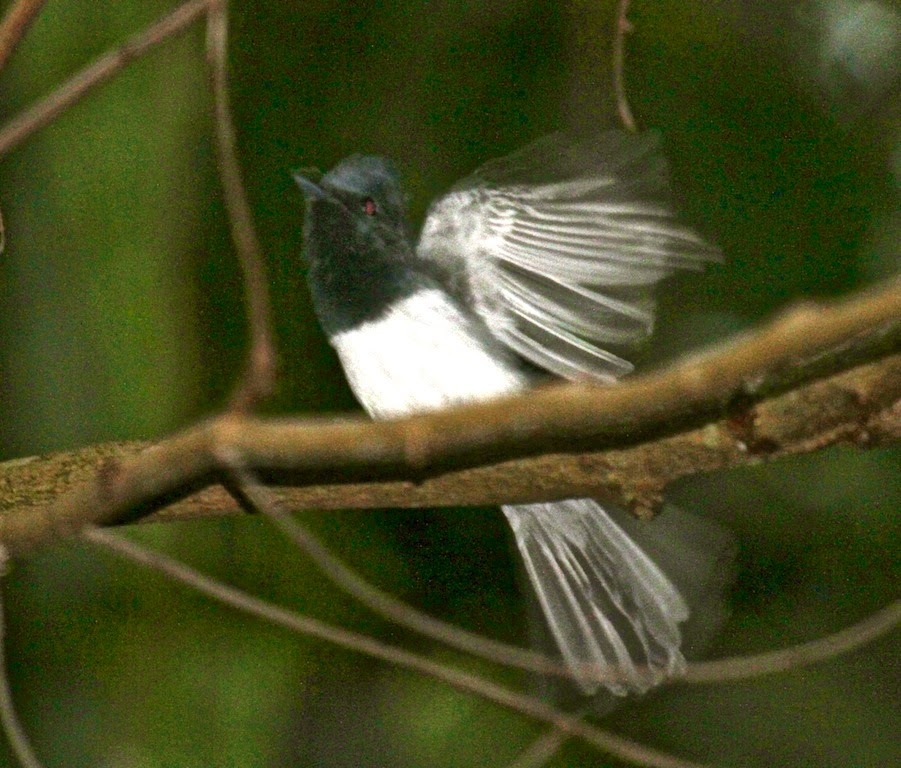 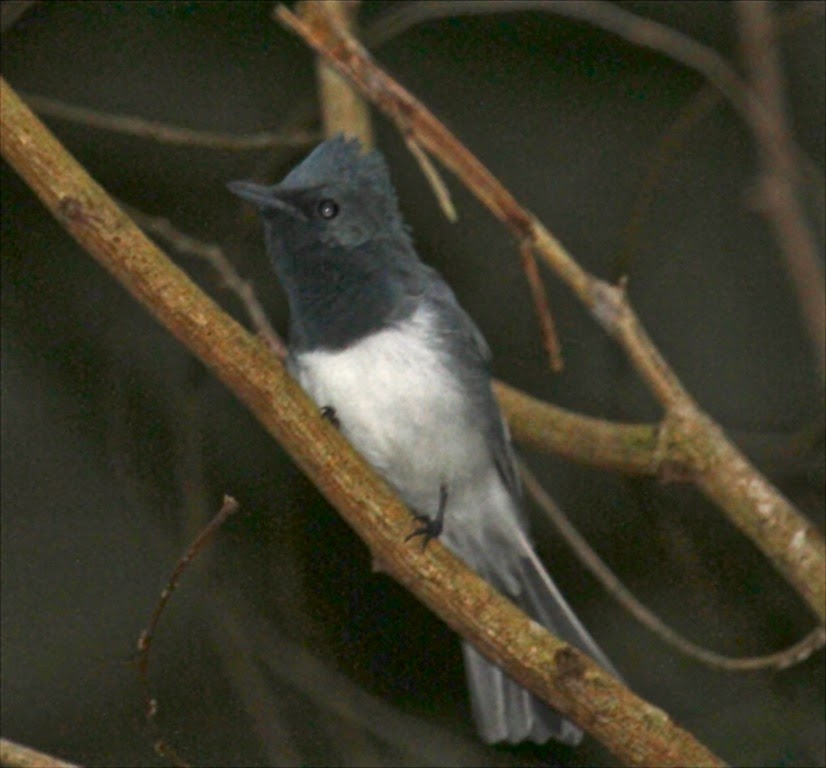 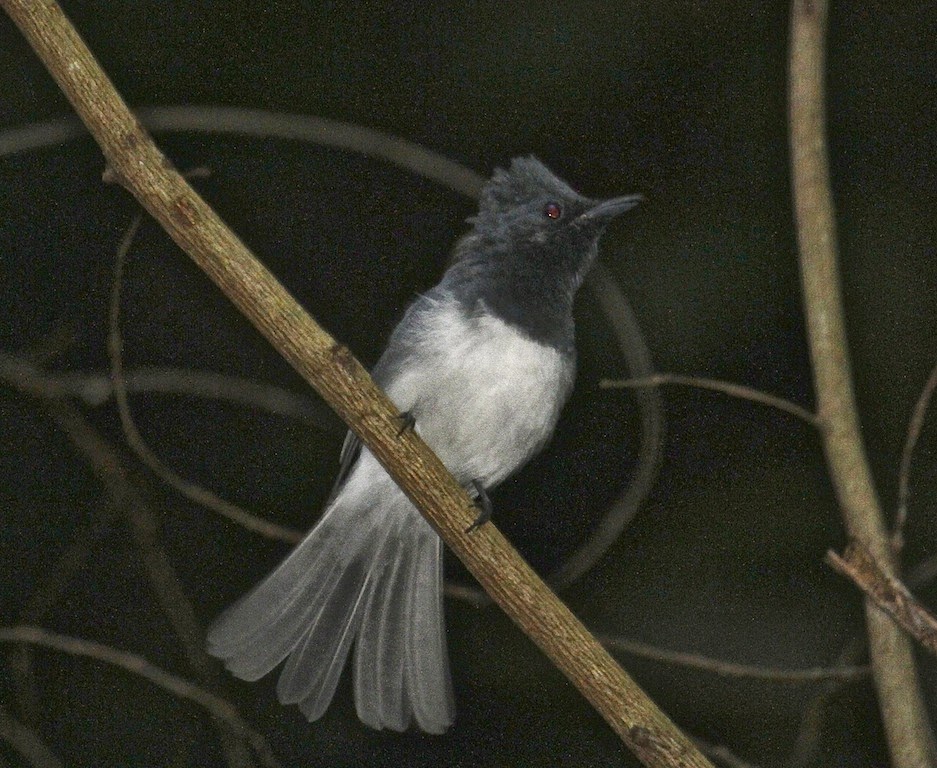 Kookaburra is enjoying the sunshine and five mates have joined him. They sing a happy cacophony in celebration of the beauty of the day every morning and every evening. 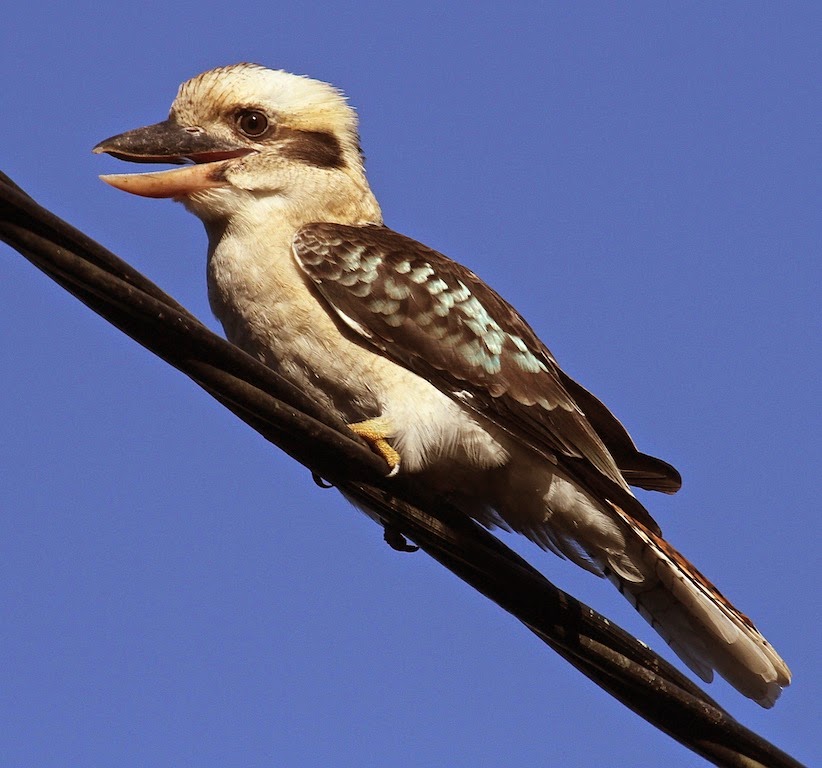 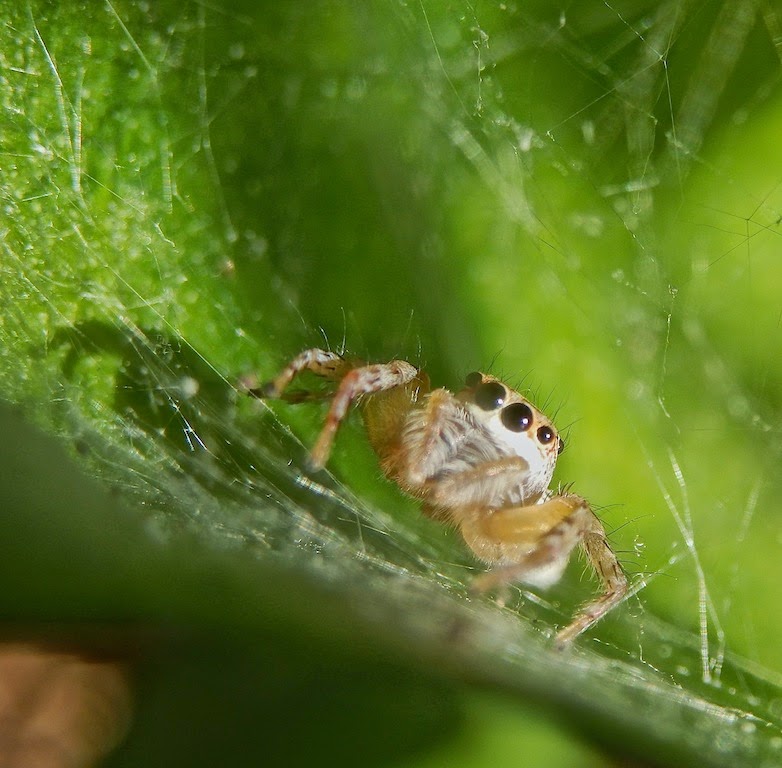 Little Jumping Spider Cytaea xanthopus is still in her winter retreat. I wonder can spiders close their eyes? Whenever I look in at her she seems to be motionless in hibernation, but her eyes are wide open. 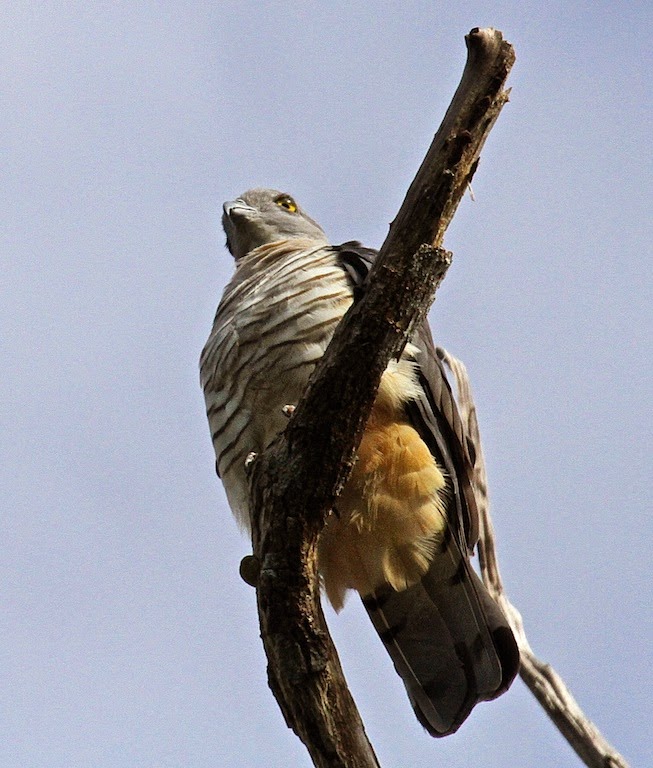 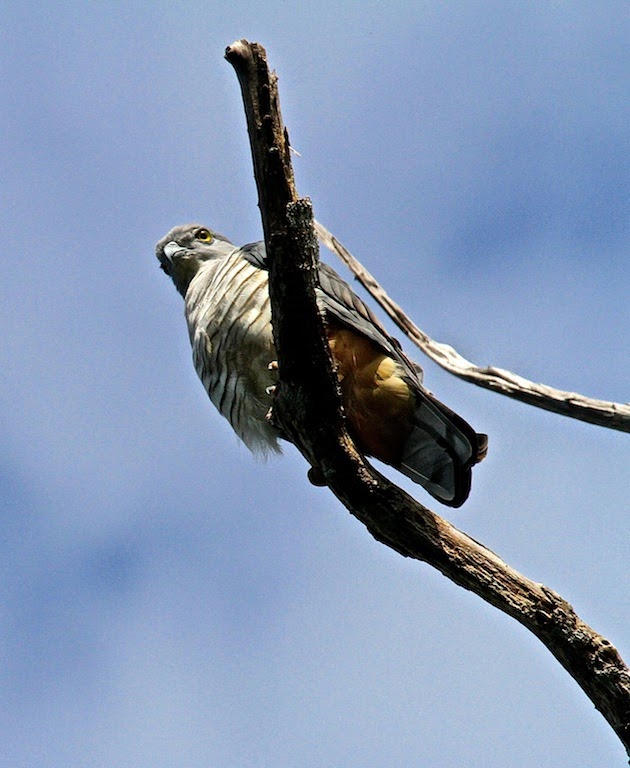 Crested hawk is on the hunt for frogs and lizards and when I sneaked under his look-out tree to take a photo he leaned down and gave me a very cross look. 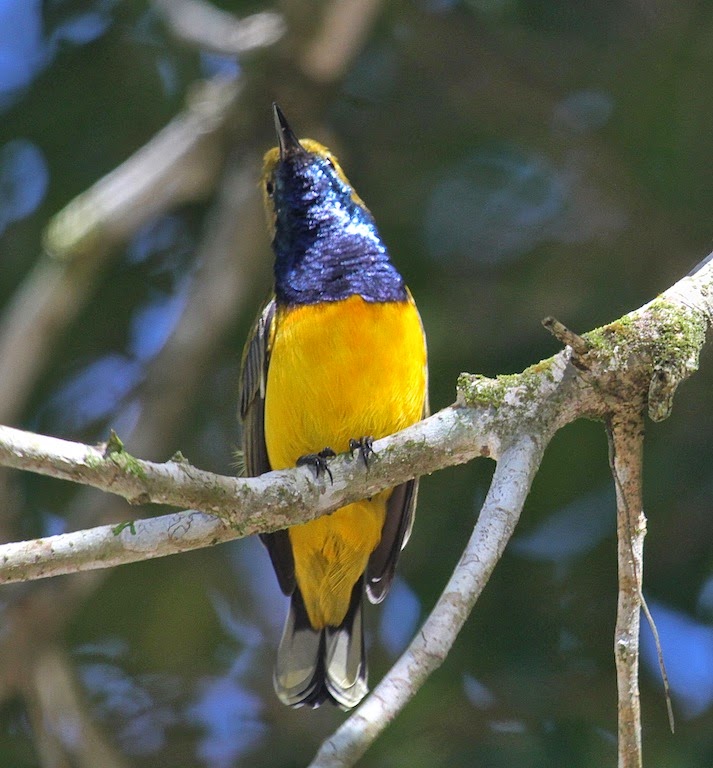 The sunbirds were very active and in the warm sun this afternoon and this male sunbird sung for over ten minutes to himself, I could not find any females about. I think he was singing for the love of the day and his feathers glowed iridescently in the afternoon light.

The sunsets over Mt Bartle Frere have been outstanding again this week. Bartle-blue turned to Bartle-gold as the sun sank below the horizon in the foothills of the Johnstone River Valley. 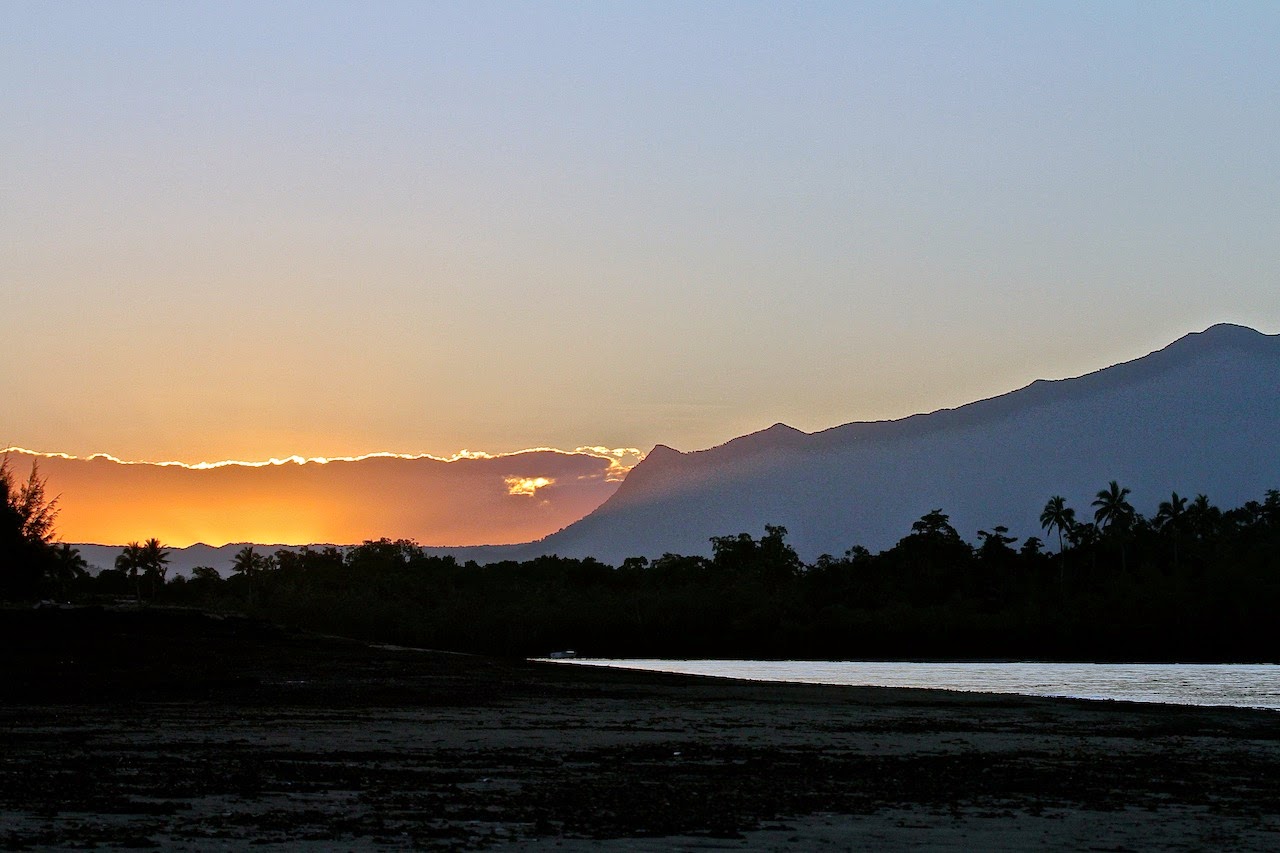 This photo is for you Ruth.