Hello from the Mosquito Coast,

Another week of showery, drizzly weather and the mosquito population has reached plague proportions.
The cassowaries walk around with a halo of mosquitoes buzzing around them. It's a tough life in the rainforest. 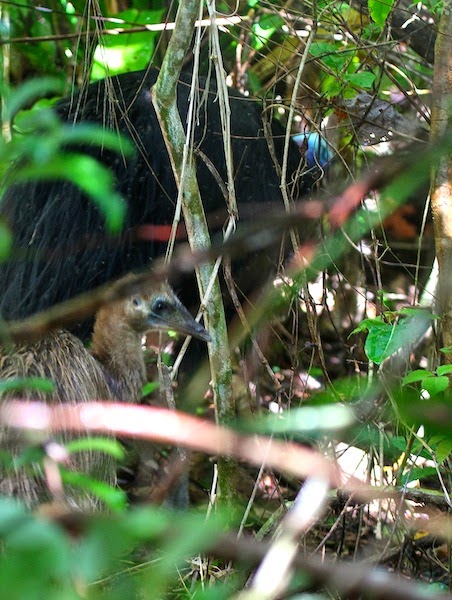 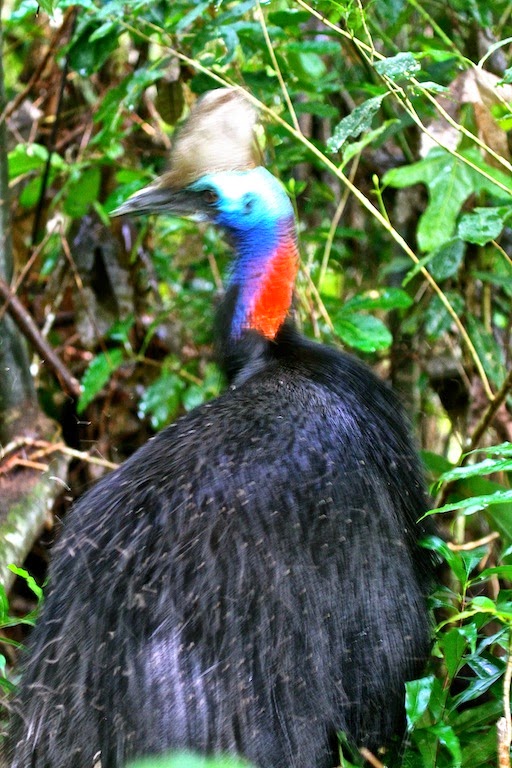 The cassowaries take the opportunity to escape the mosquitoes and occasionaly sun-bake in the open…that is when the sun comes out from behind the clouds.         I was watching Snout and Ky enjoying the sun under the flame tree, Brachychiton acerifolius, when seed pods starting falling all around. 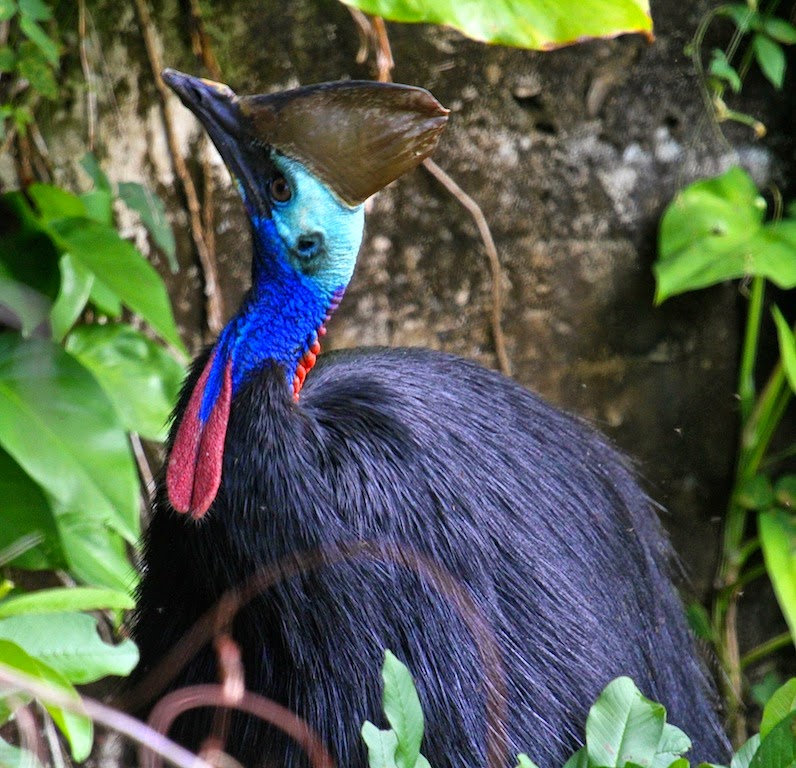 Snout looked up at the tree to see what was causing the rain of seed-pods.  White cockatoo looked down at Snout. I am sure I heard him say "Hello Cassowary".

White Cockatoo was enjoying a feast of flame tree seeds. He would pick a seed-pod, then holding the pod in one claw, carefully extract the seeds. When he finished he dropped the empty seed case down on cassowary. 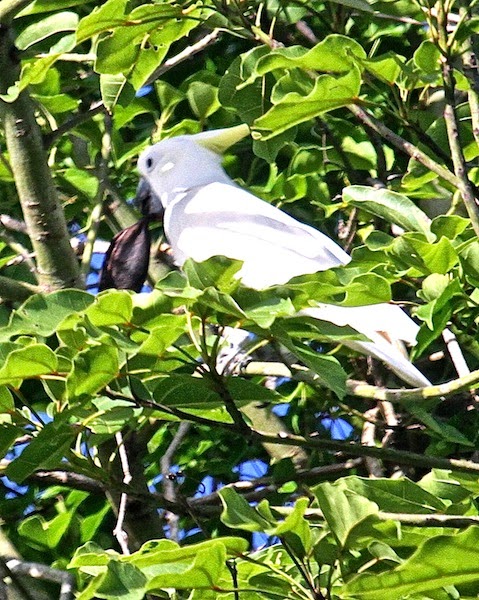 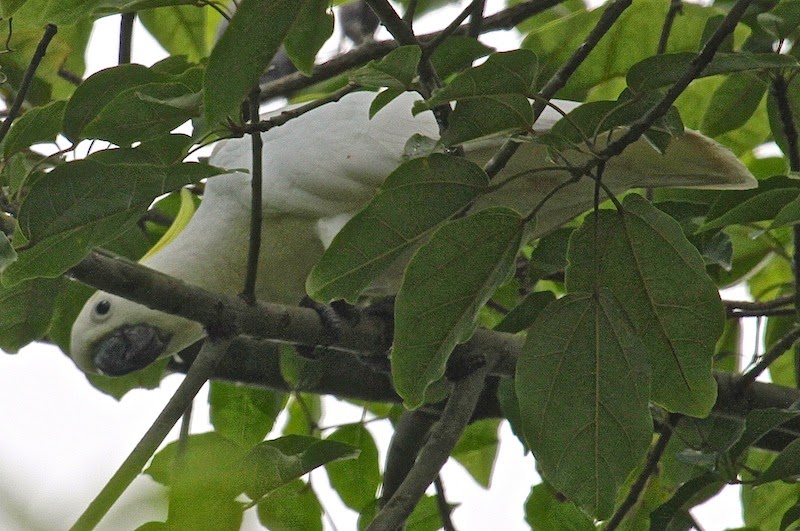 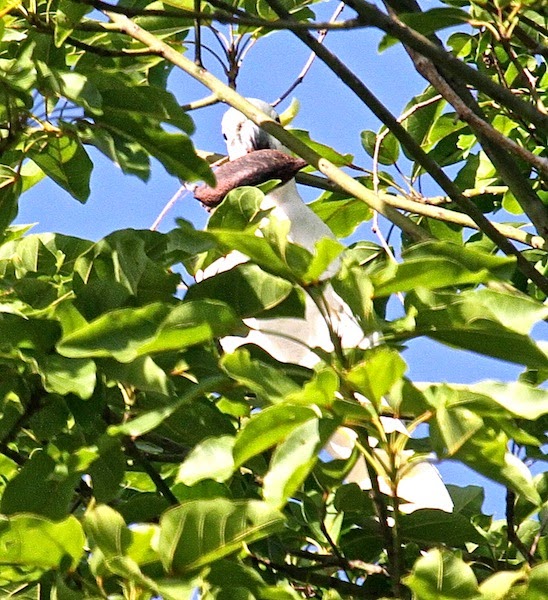 White cockatoos have a bad reputation with farmers as they do eat horticulture crops and particularly love citrus fruit seeds.

The cockatoos feasted on Ian Laidlaw oranges this week and Ian found the yellow honeyeaters took advantage of the opened fruit.

" The white cockatoos open the fruit in order to eat the seeds, this allows a variety of honeyeaters an opportunity to feast on the exposed flesh of the fruit, nothing is wasted." Ian said and sent this photo of a yellow honeyeater enjoying the sweet orange juice. 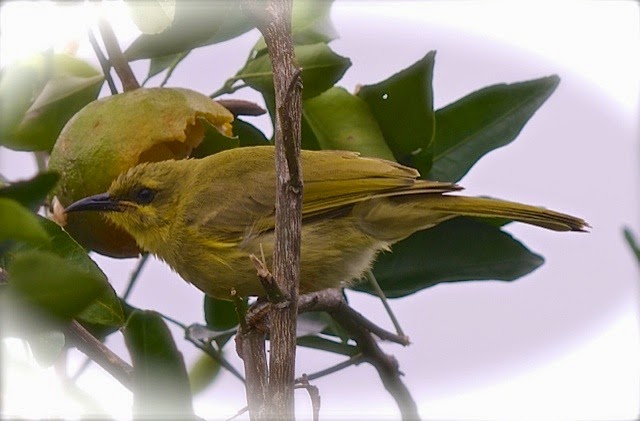 Thank you for the lovely photo of the yellow honeyeater Ian.

It is unfortunate when we cut down the cockatoos natural food trees and then plant other fruiting trees on the same land. The cockatoos, in order to find a feed, are left with no other choice. However when their natural food is available, from what I have seen, they will eat that in preference.

Eight white cockatoos have been feeding on the flame trees seeds every day this week. 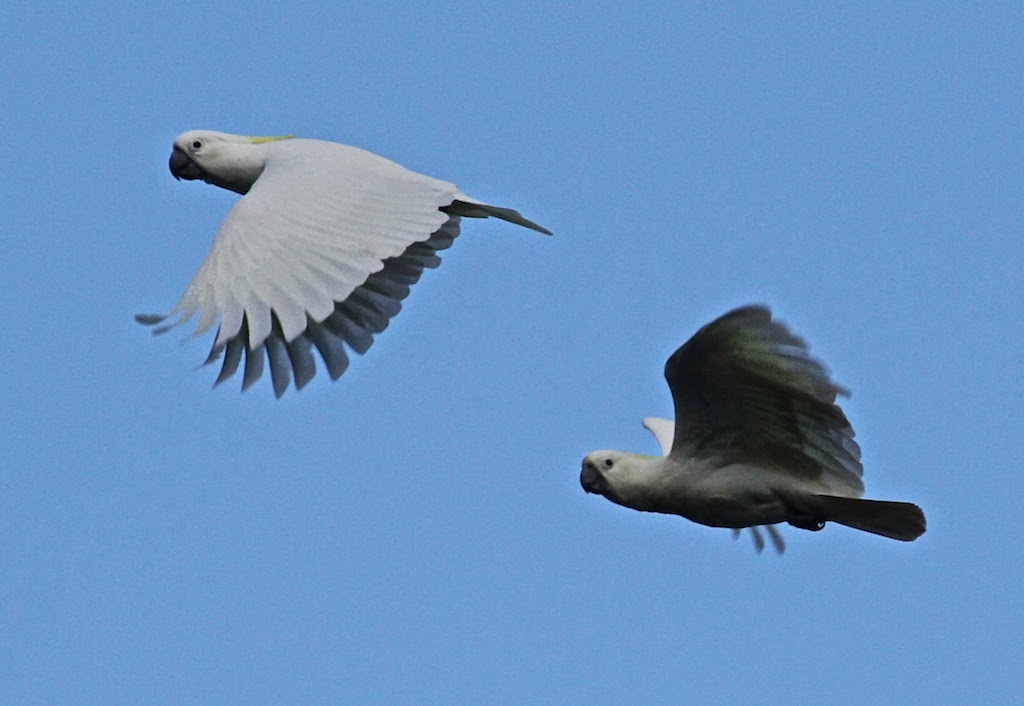 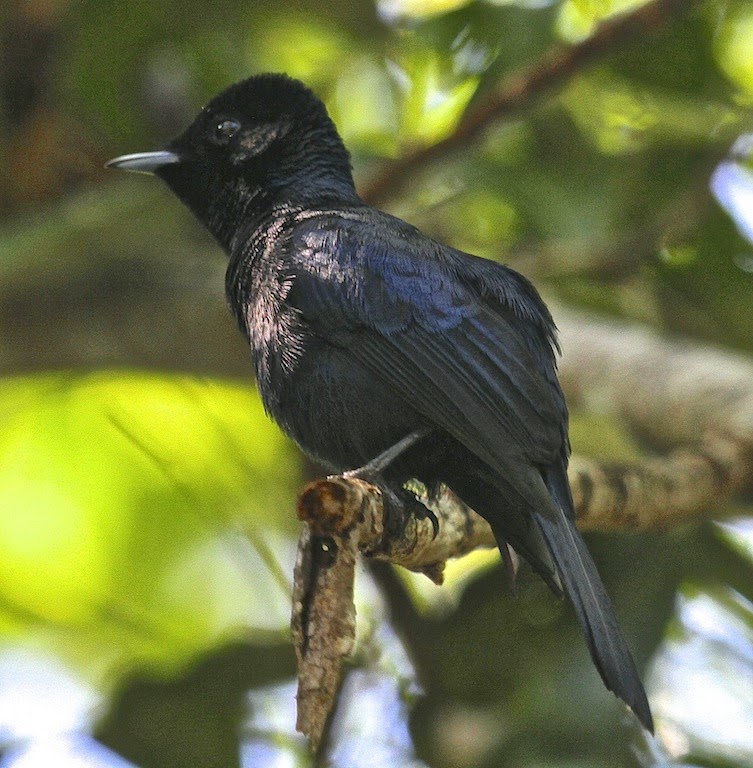 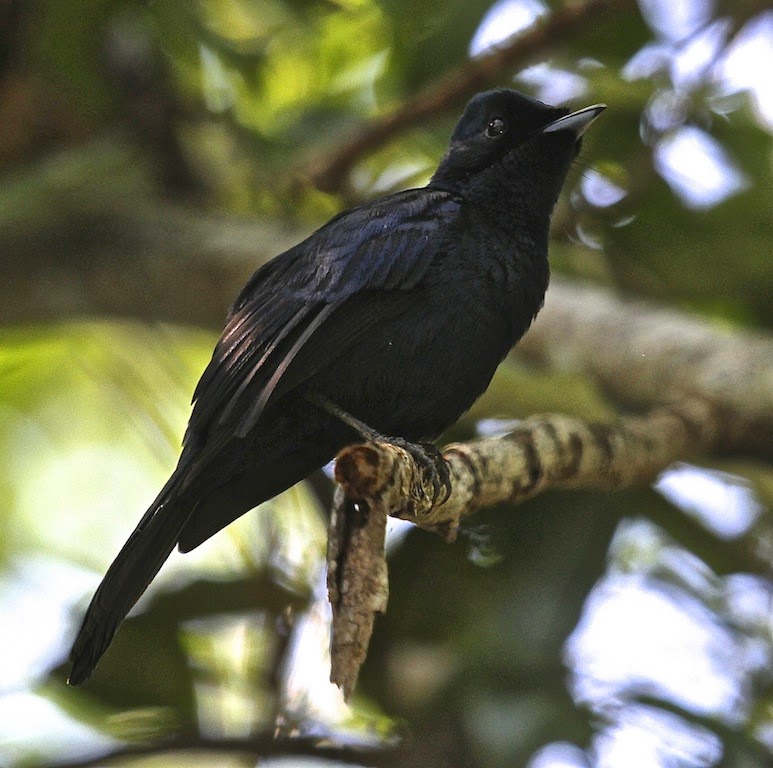 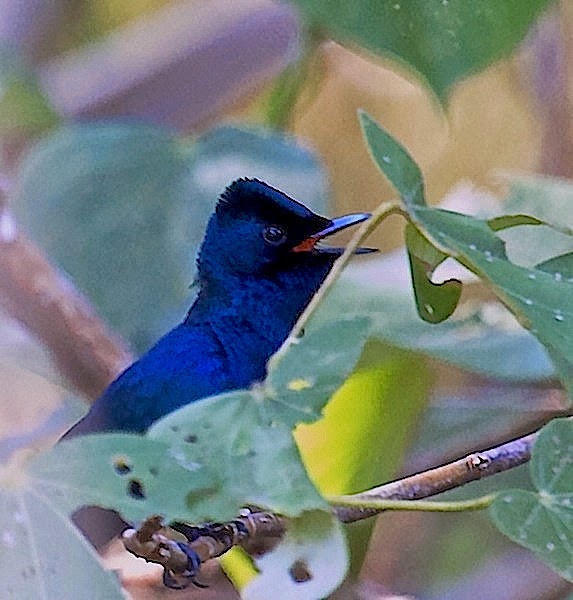 I tried unsuccessfully to capture a photo of him with his mouth open revealing the red inside, between the mosquitoes and the sandflies I lost concentration. Sometime ago I did get a shot of Shining flycatcher, from a distance, with his mouth  open. You can just glimpse the red colour.
This bird is probably the most glamorous of all our flycatchers. When he is seen in the sunshine his feathers take on a blue-green sheen and as such is often called the Satin Bird. He has many calls to his repertoire and when using the scolding crock he will often erect his semi-crest. He does have other calls, a sustained whistle, which is more common and a sweet musical trill. 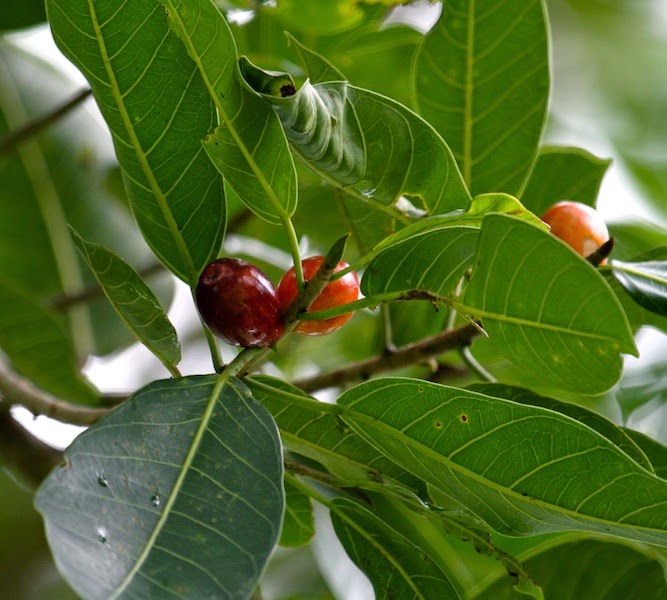 The luscious edible fruits of the red strangler fig, Ficus drupacea have the birds in a feeding frenzy.

This tree fruits multiple times throughout the year and is a giant in the rainforest growing to over 30m in height and the width even greater.

Yellow eyed cuckoo-shrikes are particular fond of the fig fruits and all this week I have been watching a flock of a dozen of these birds flying into the tree two or three times a day. 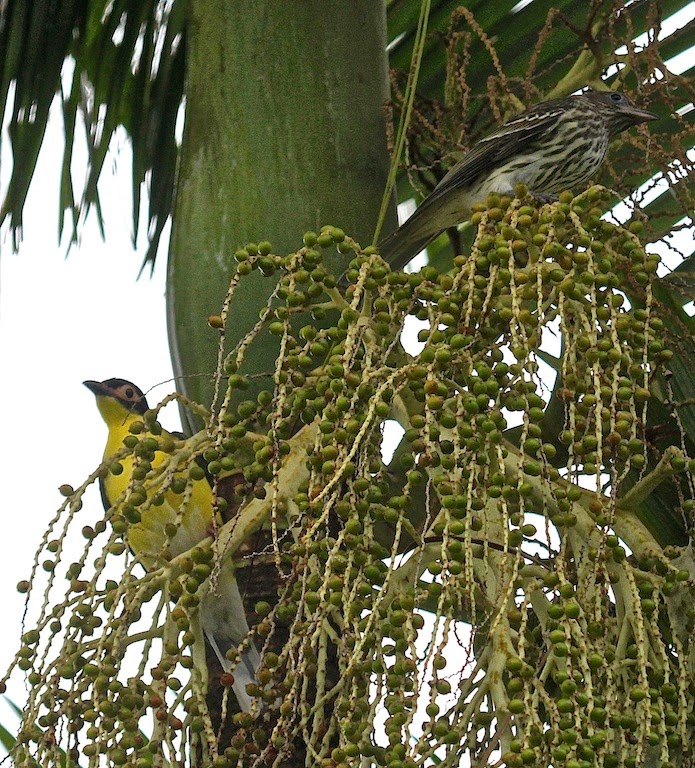 The fig birds have eaten all the ripe fruits on the Alexandra palm Archontophoenix alexandrae and are now also feasting on the fig fruits.

Yellow Oriole, seems to prefer the fruits in their yellow ripe stage and with the crowd in the tree, he has been plucking the fruits and taking them to a bougainvillea shrub nearby to eat them in peace. 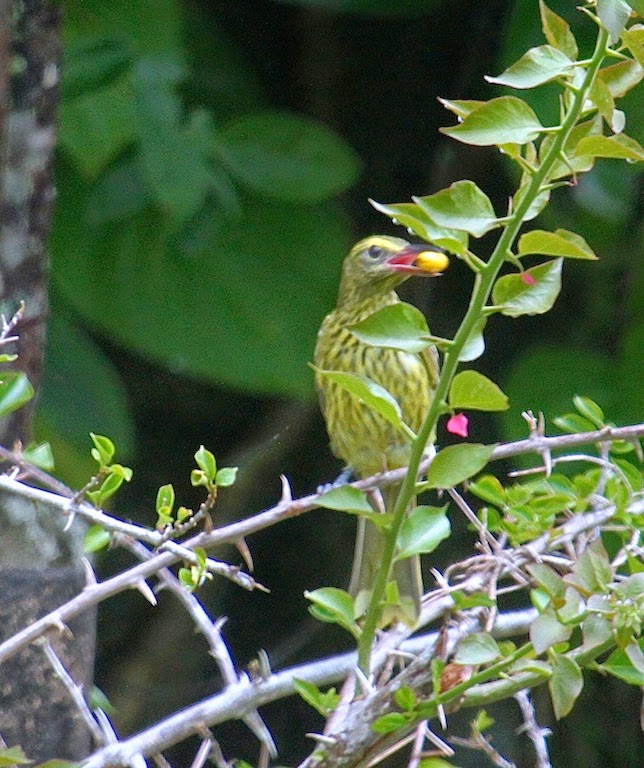 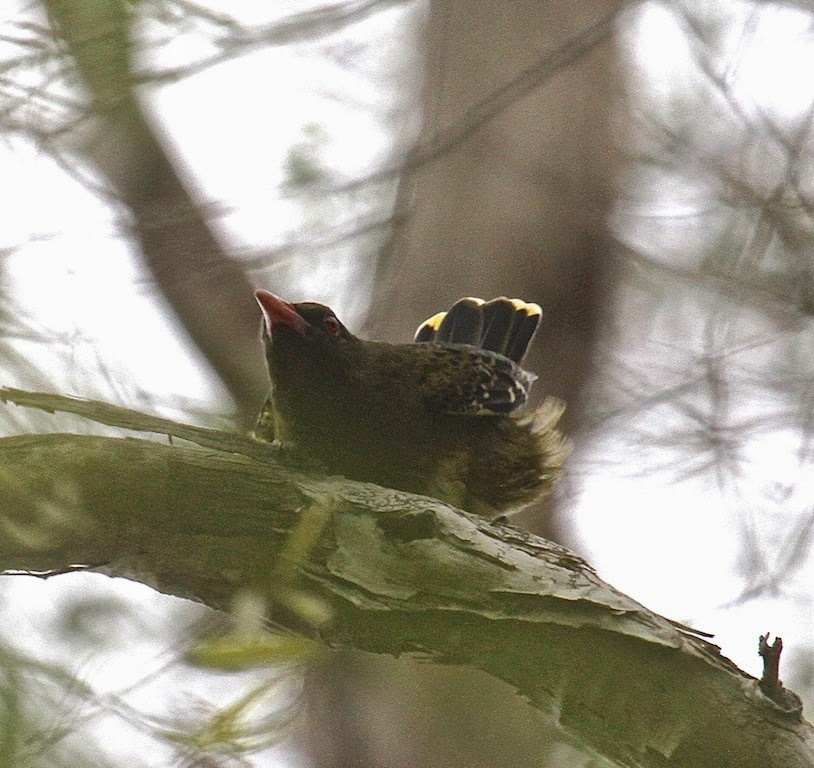 The days have been very warm for late autumn, 27 to 28 degrees, that is when the sun comes out, and the nights around 23. We had a few weeks of cool weather in May and now this extended drizzly, warm weather which has followed is confusing the birds, particularly Yellow Oriole. While normally a spring breeder I have been watching what appears to be courtship behaviour between the Yellow Orioles.

This bird put on a very noisy display, dancing and fanning his tail and calling in loud bubbly notes to another Oriole in a nearby tree. 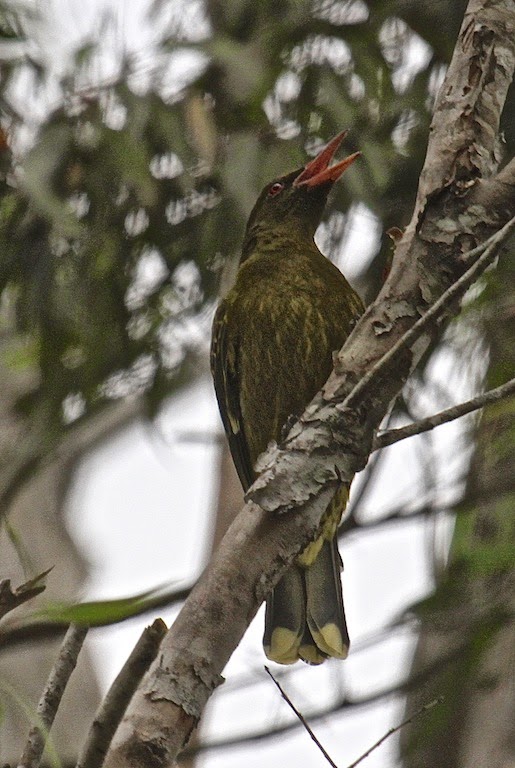 The yellow orioles have been displaying in a courtship manner all of this week. 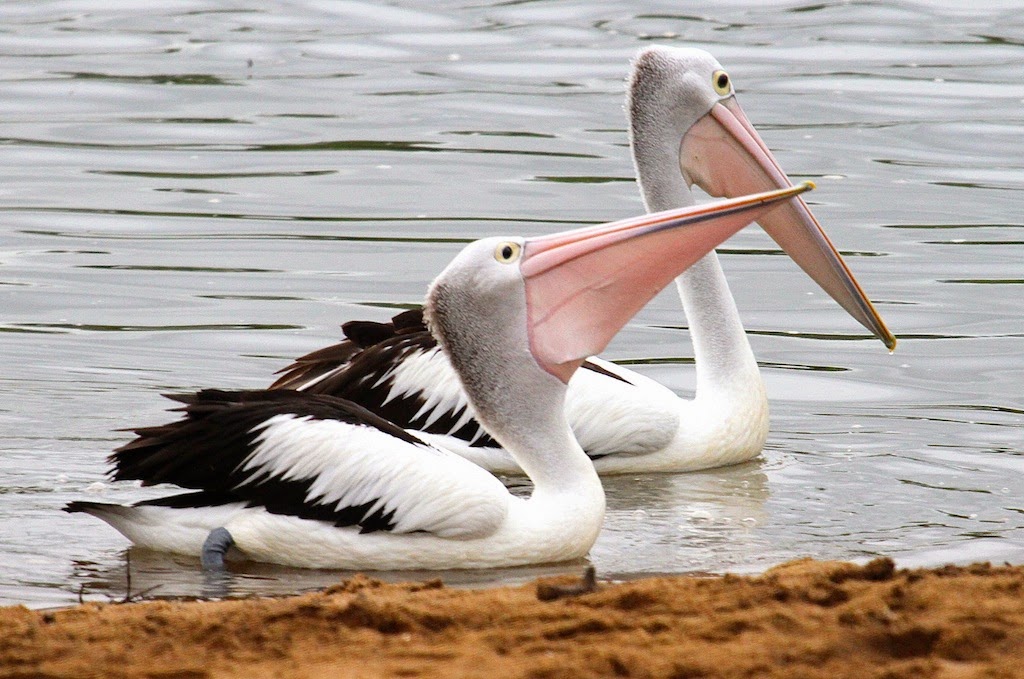 On the beach the pelicans appear to be also engaged in pair bonding behaviour. While pelicans have been known to breed at any time of the year and generally inland, depending on conditions, this year they are most likely to stay on the coast as inland areas are gripped in a continuing severe drought. We may whinge about the rain on the Tropical Coast, yet such a small distance across the Great Divide it is all so different. 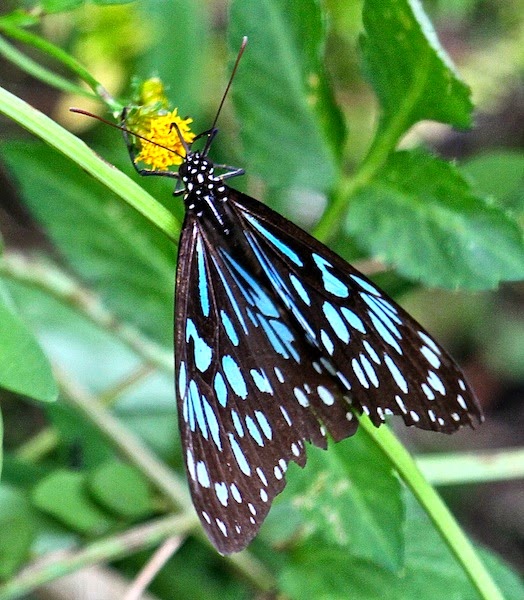 Butterflies are in large numbers at the moment and when the sun comes out they feast on nectar, such as this blue tiger on the left.

The swamp tigers, also in large numbers, at the moment are competing for the same wild nectar. 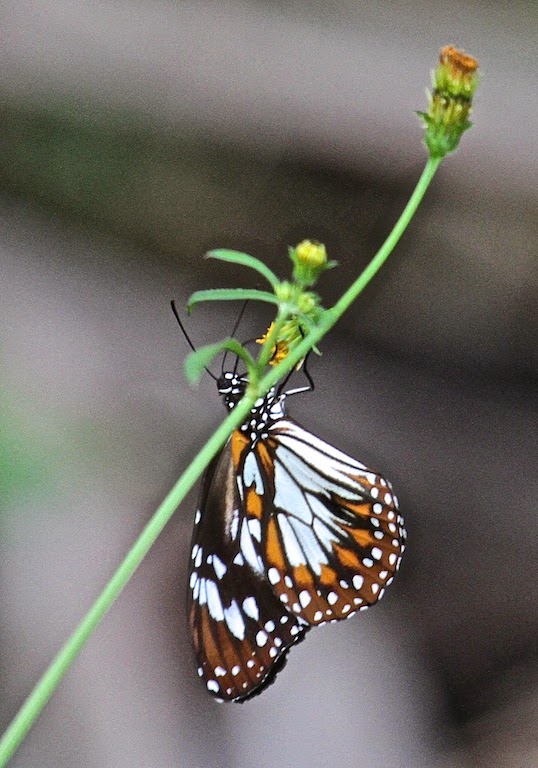 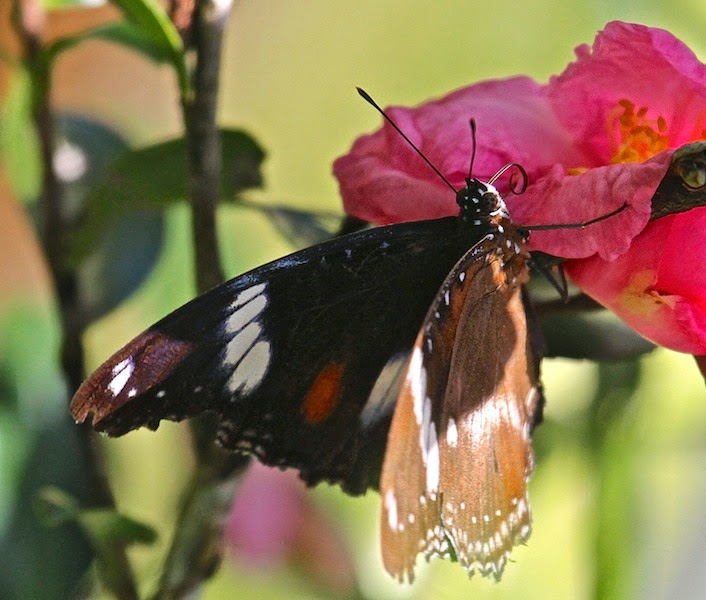 While this female common egg-fly prefers to sink her proboscis into the exotic camellia flowers in my garden. 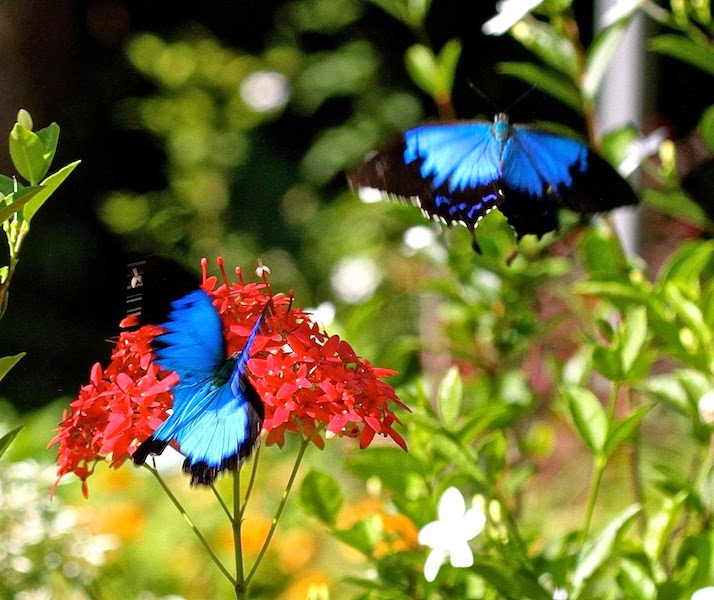 It is the Ulysses butterflies that have been most active this week and they also appear to be mating.

Some of the butterflies have damaged wings, such as the one in the foreground, but this didn't appear to hinder her flying ability. 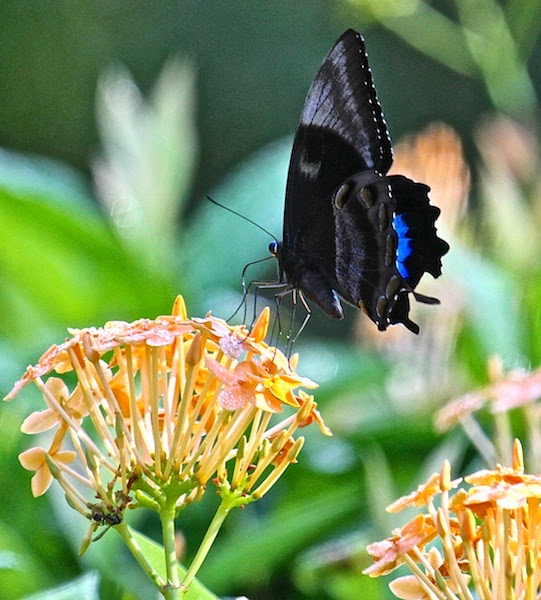 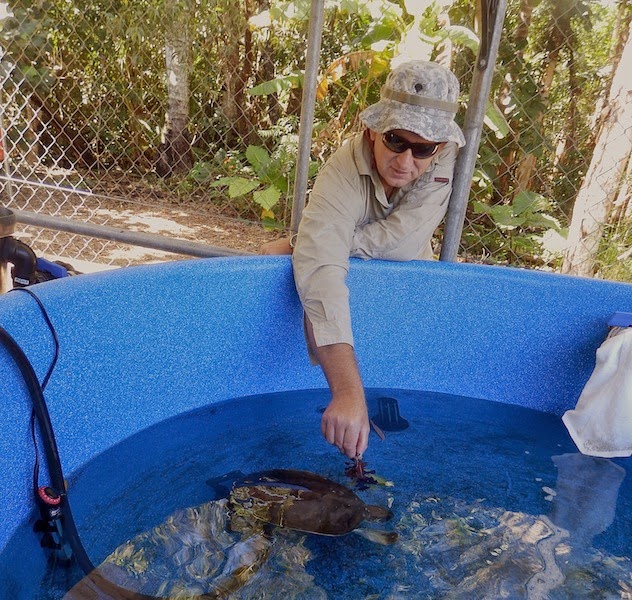 Little Slaty the flatback turtle is doing fine. He is taking squid when offered and on the left Russell Constable is offering him some red oak-leaf lettuce. 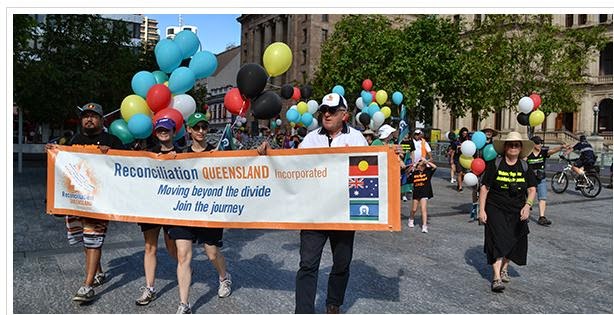 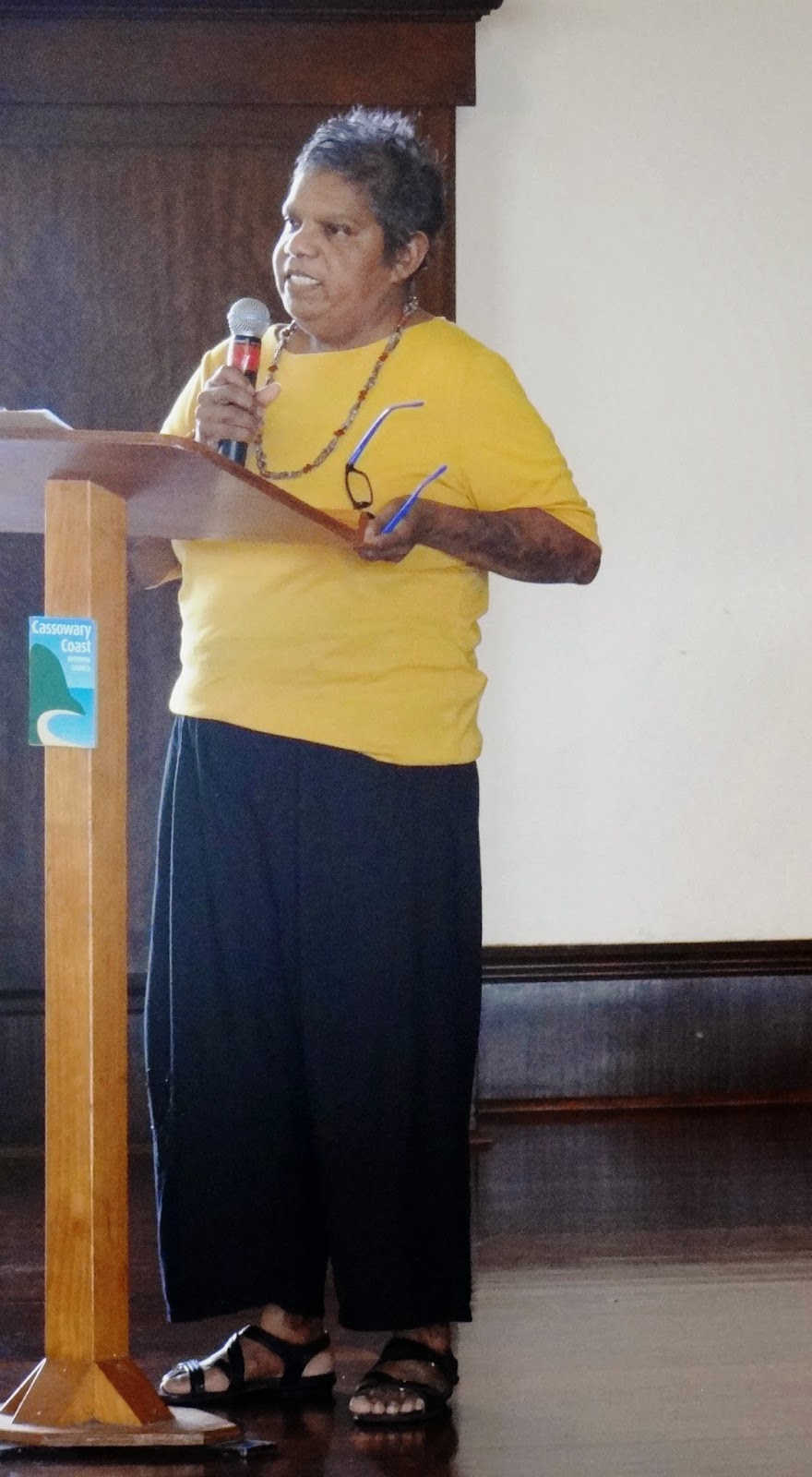 The lovely Karen Yaroseray spoke from her heart about the theme of the week. ' Lets Walk the Talk', and delighted the audience with her heartfelt speech.

The students of East Innisfail School gave us an outstanding performance on drums. These children are very talented. 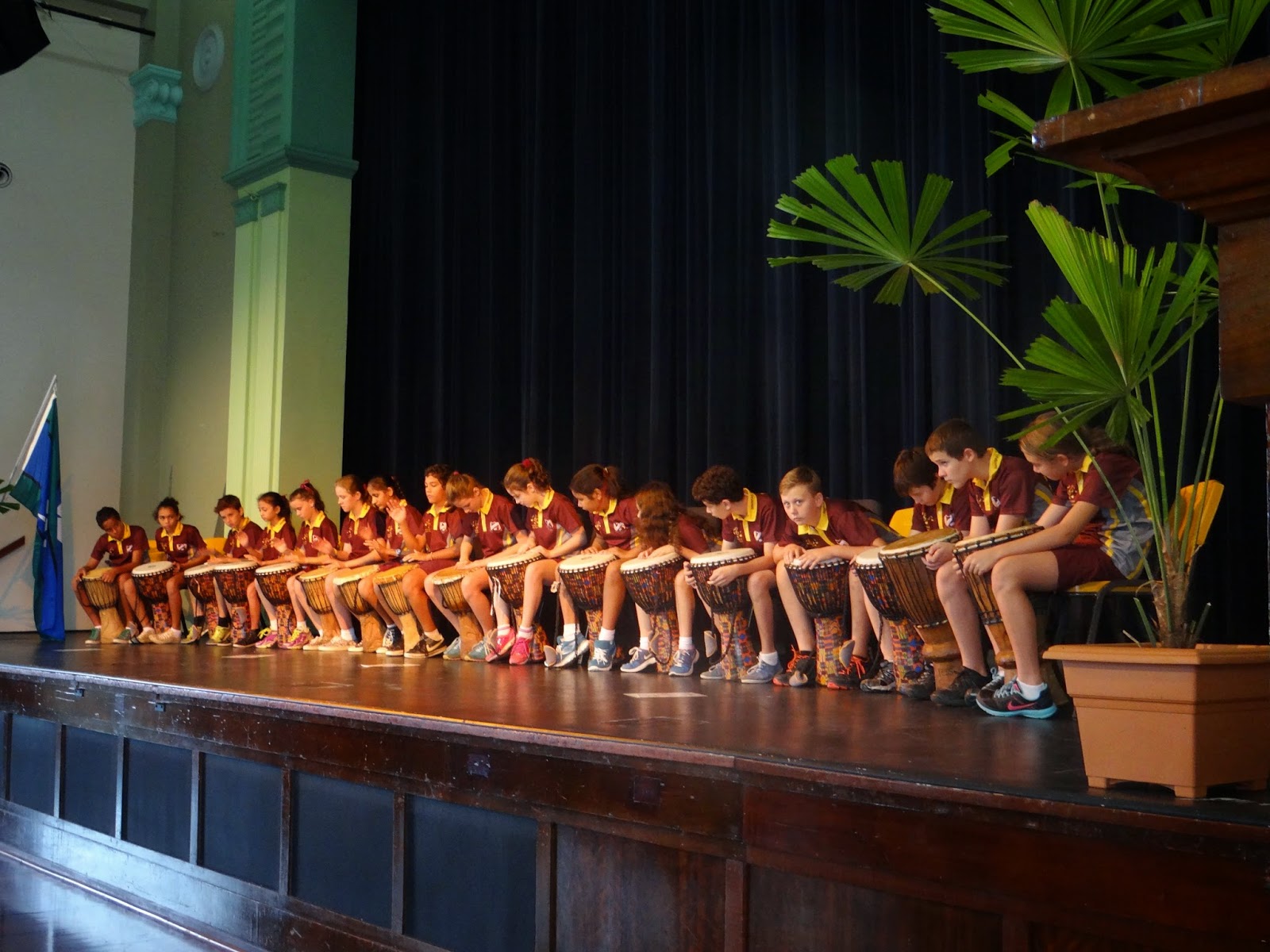 A reminder that this coming Thursday, June 5 is World Environment Day. 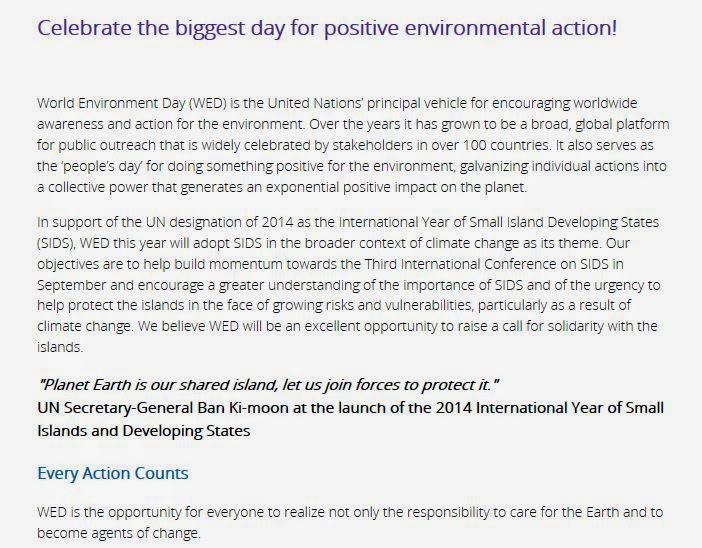