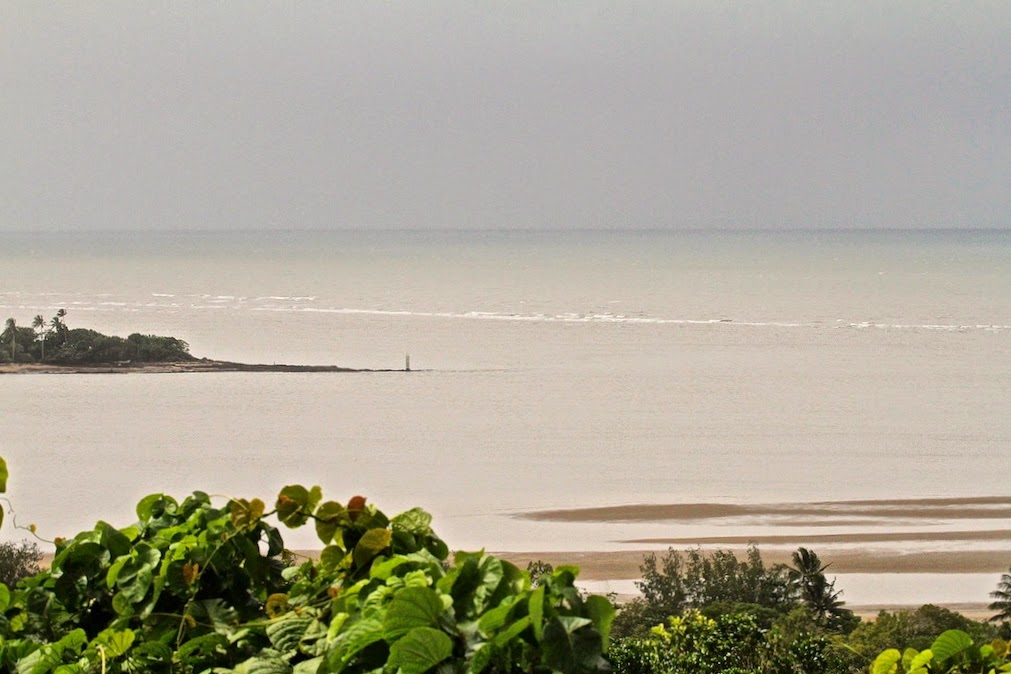 Where we are already a week under a strong wind warning and at times torrential rain looks like continuing for another four days. A large slow moving high in the Bight was enhanced by an upper level system which has resulted in the rain and a thunderstorm, very unusual for this time of the year. Yet again the Johnstone River is running brown into the Great Barrier Reef lagoon.

How can we complain about the rain when just across the Great Divide the country remains in severe drought. As we slip into another El Nino weather event the Eastern Pacific Ocean temperatures continue to warm. This week temperature anomaly values have increased to between 1 and 3 C above average with  local spikes up to 3.9 C above normal temperature. This coming year we could see a record-setting El Nino event. 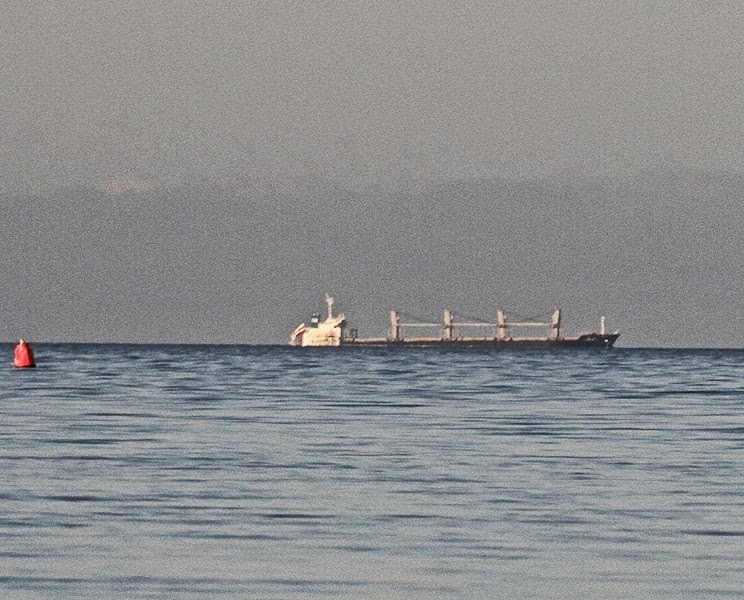 Meanwhile back on, what was the farm, the Newman Government has signed off on a $16 billion coal development in the Galilee Basin. This could become the biggest coal mine in the world. To start with the Carmichael Coal Mine, north-west of Clermont, will produce up to 60 million tonnes of coal each year. Where will the water come from to run these high-water-use mines?

Not to forget, in the future we will see a continuous line of bulk coal loaders negotiating the Great Barrier Reef passage heading north with coal. While another line of container ships will head south, driven by our insatiable consumer demands.

This week's federal budget did not allocate any funding for The Great Artesian Basin Sustainability Initiative. It is now up to the Minister to use his discretion to fund the bore-capping project. One wonders, where will the water come from to grow Australia's future food-needs? 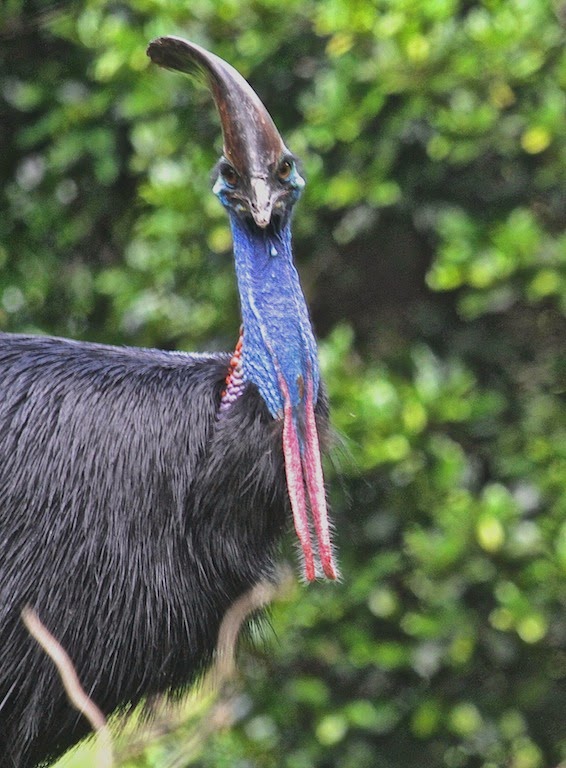 I knew it was only a matter of time before I would see another encounter between Cassowary Snout and Jessie.

Jessie was resting under the black sapote tree, ripe fruits are falling and the cassowaries have found them.

I was photographing Jessie when Snout arrived with little Ky close behind. 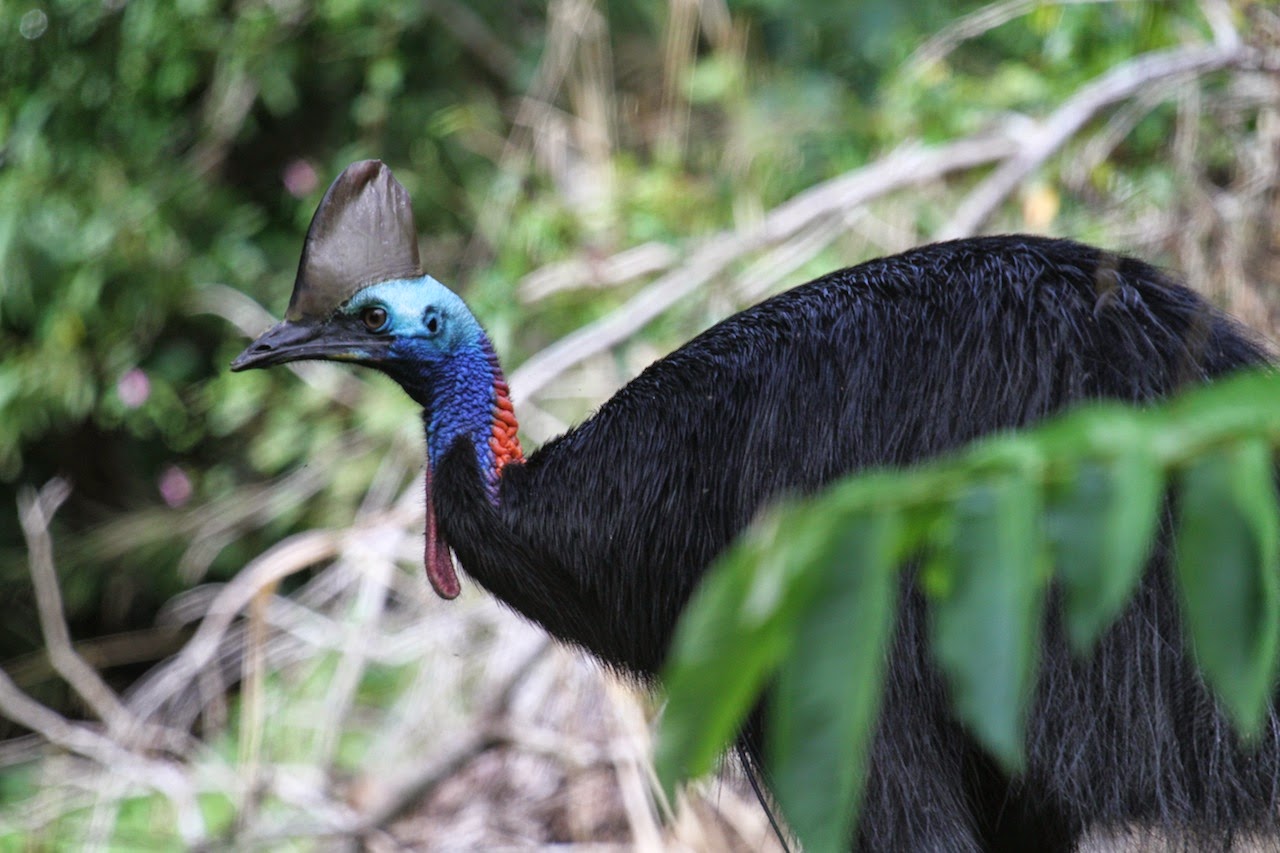 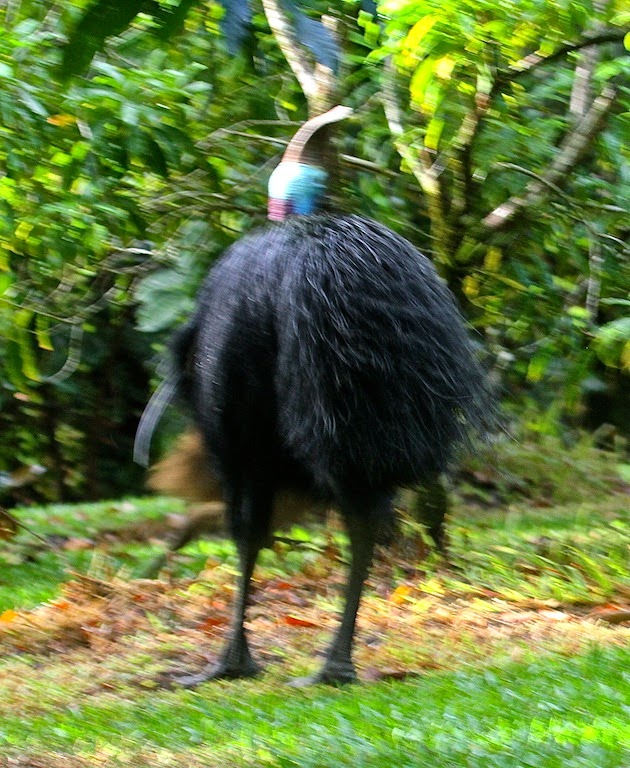 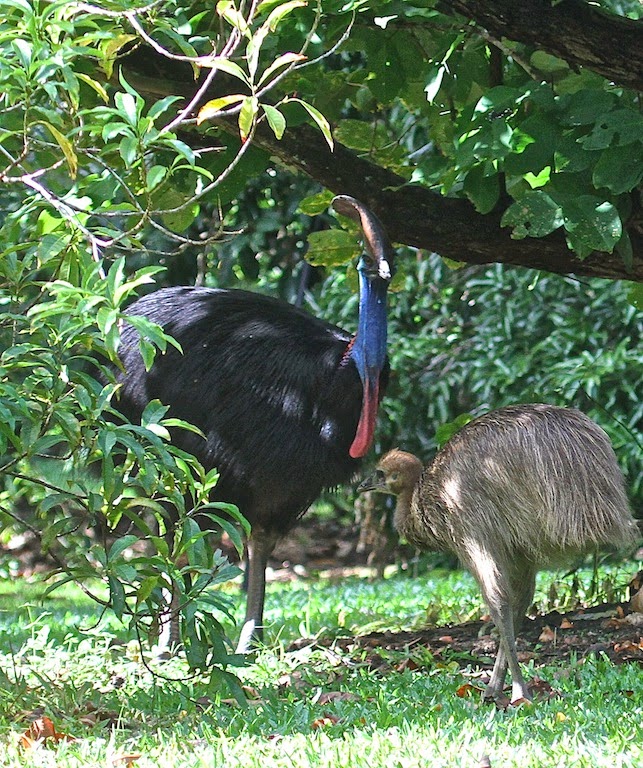 Ky walked straight up to Jessie, as if to say hello, but she honked at him and he ran as fast as he could to his father. Snout started to circle Jessie and Ky sat down and tried to look inconspicuous. 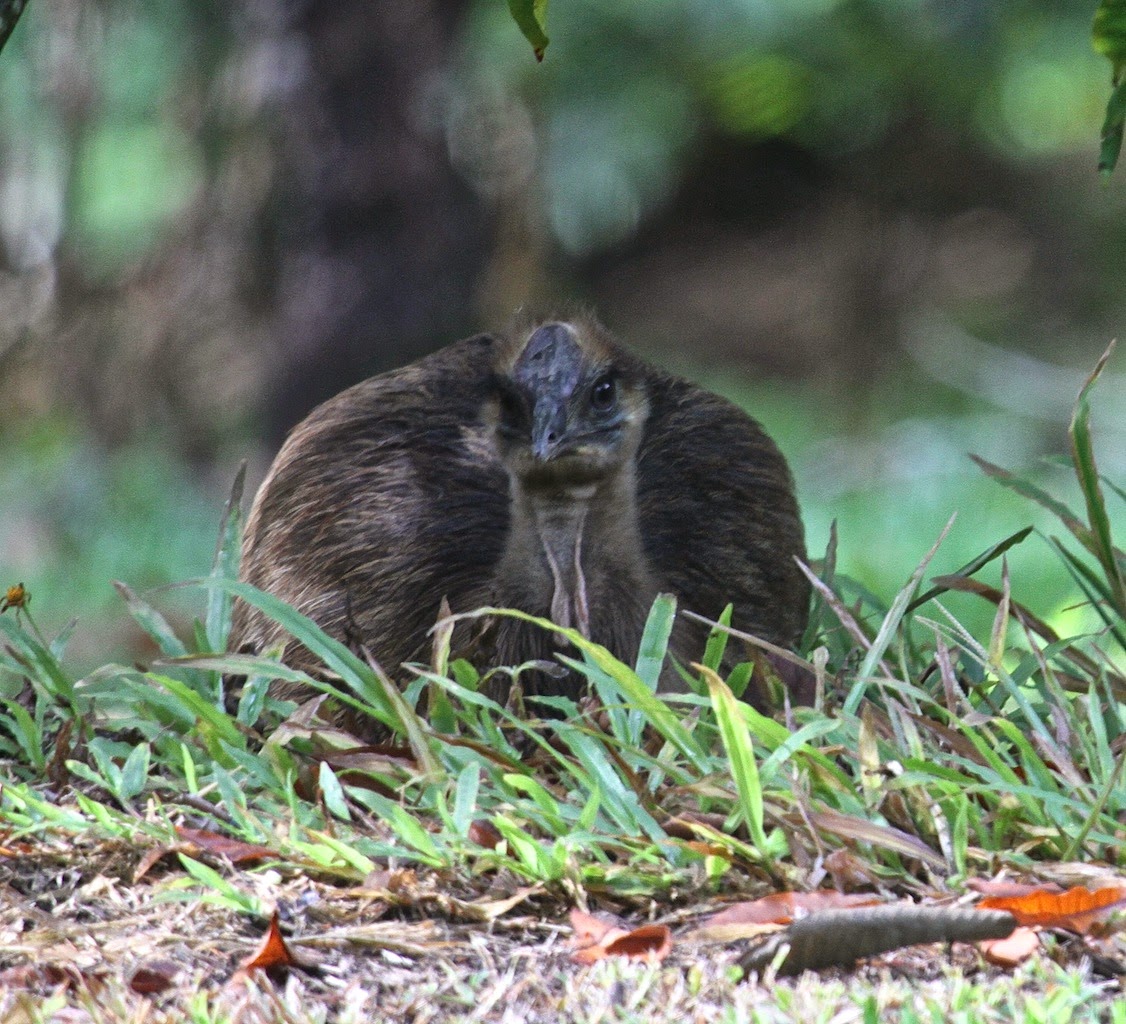 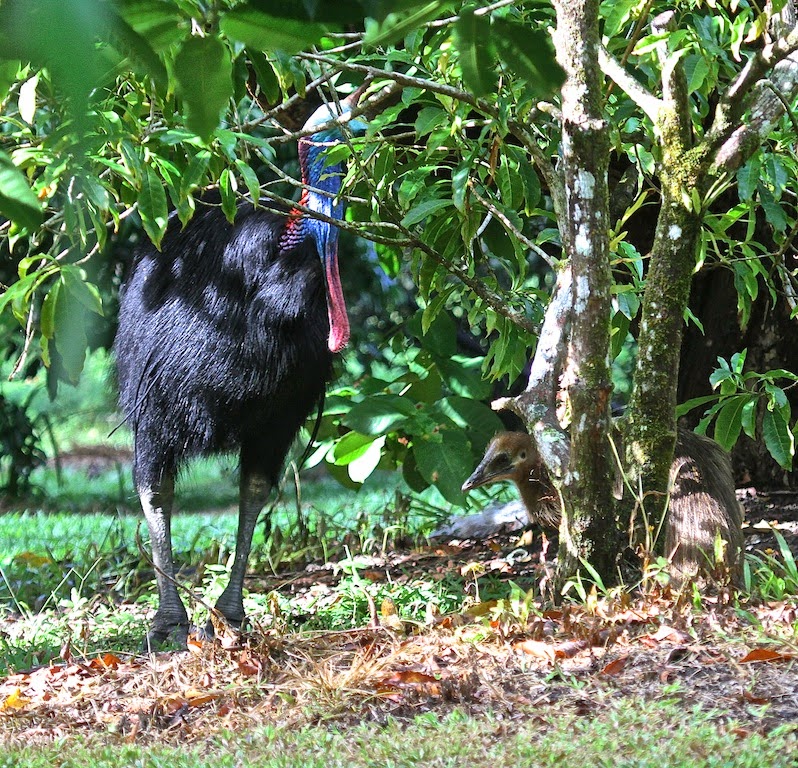 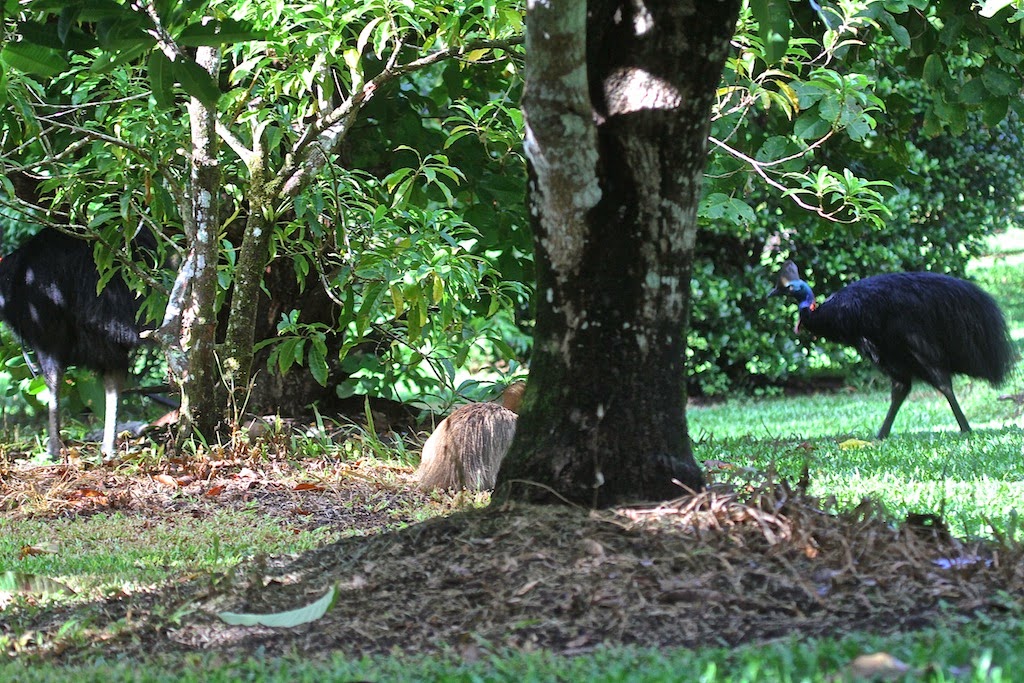 Jessie walked over to Ky but this time showed no aggression. Perhaps it was because she was sitting. 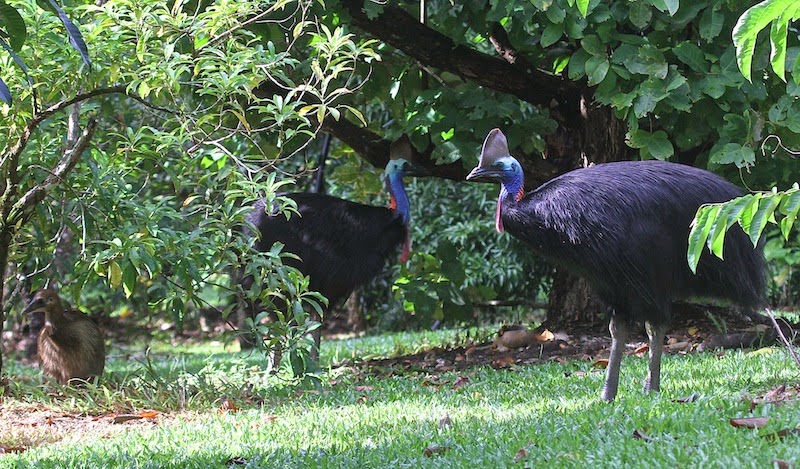 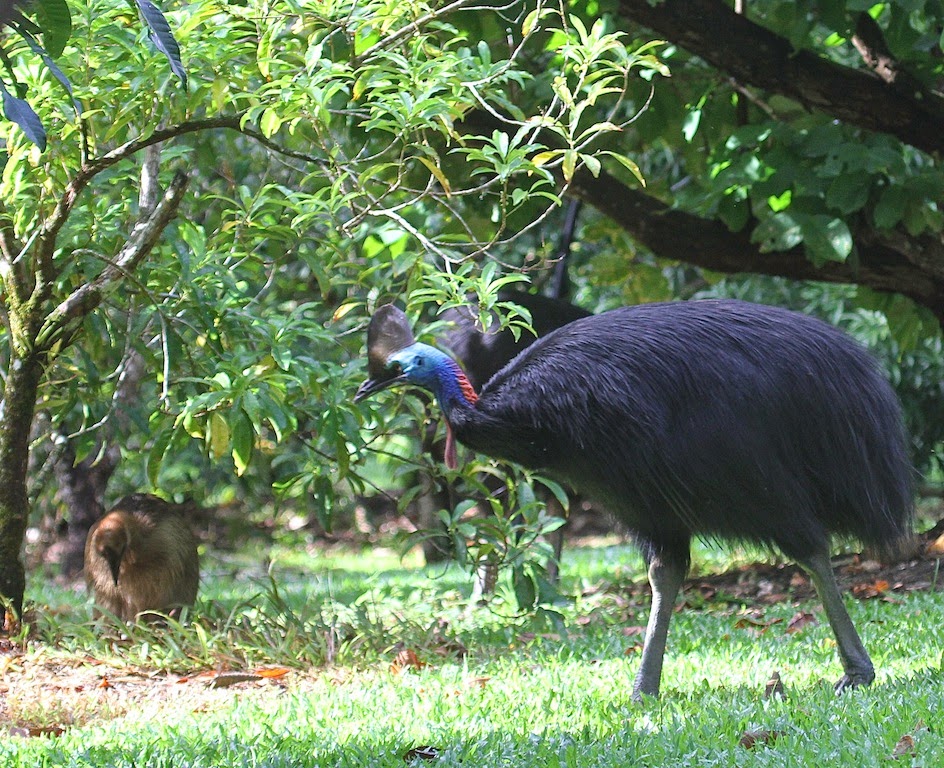 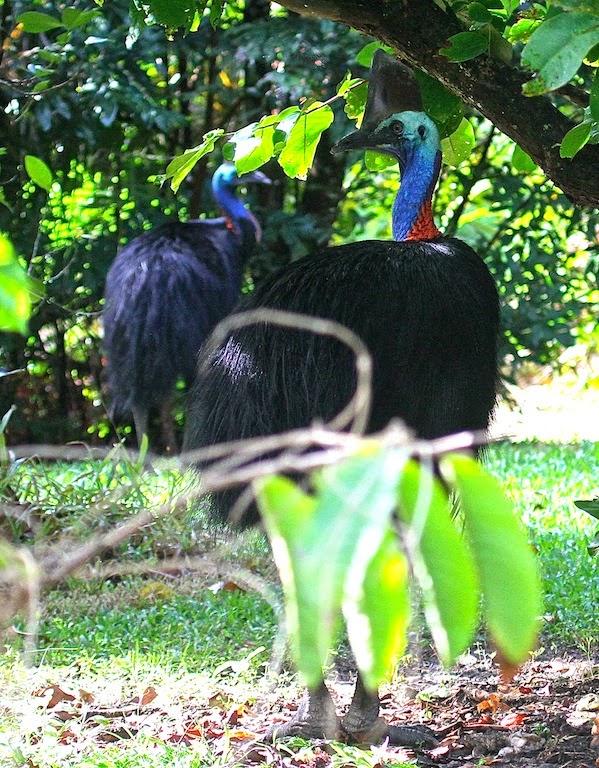 Jessie turned her attention to Snout but showed no aggression. Snout continued to walk in a large circle around Jessie and Ky, who remained sitting within the circle. 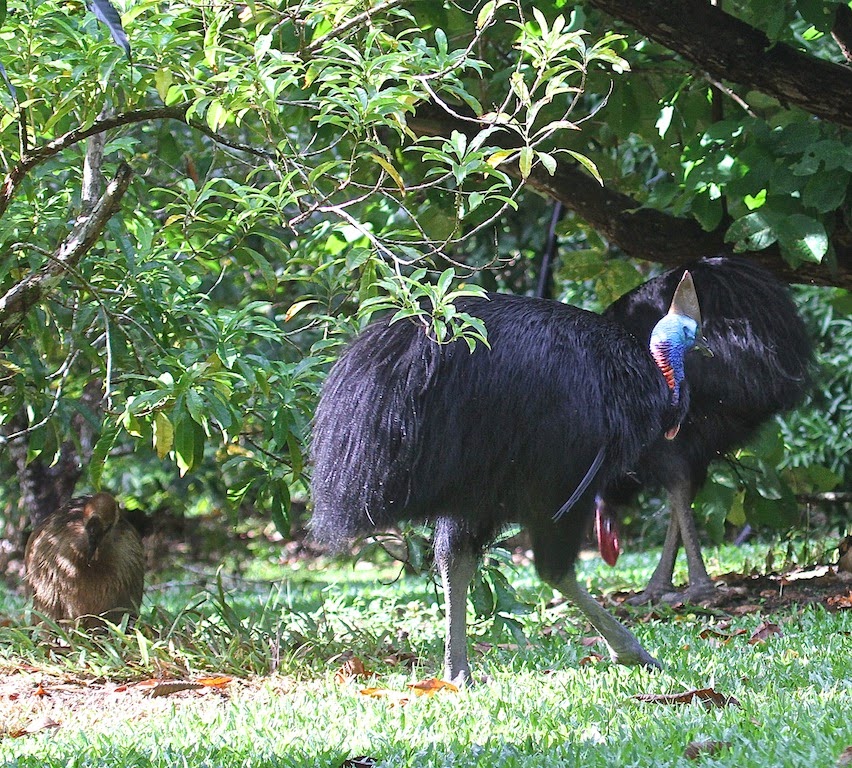 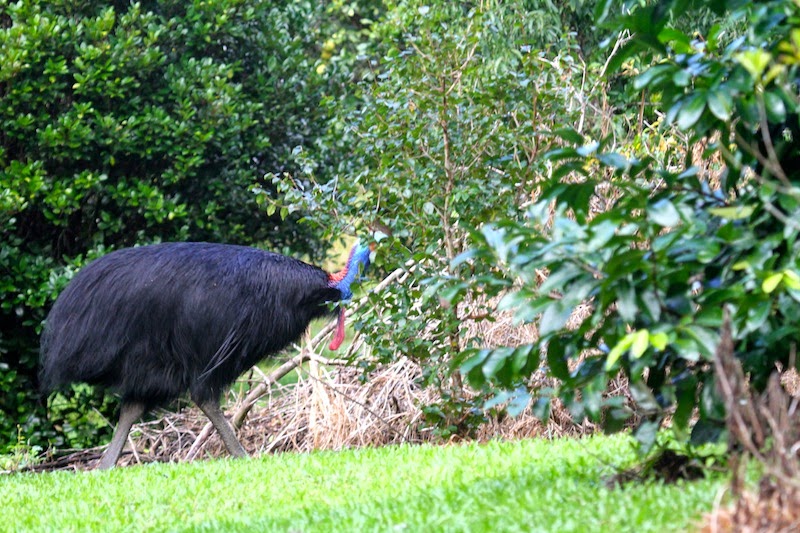 Snout turned and moved closer to Jessie,  Ky looked at the ground then suddenly Jessie moved away and walked into the rainforest close by. Cassowaries are normally solitary birds but at breeding time will pair in courtship for just over a month. However, following disasters such as cyclones the female can remain with the male until the chicks have reached subadult stage, about 18 months old. 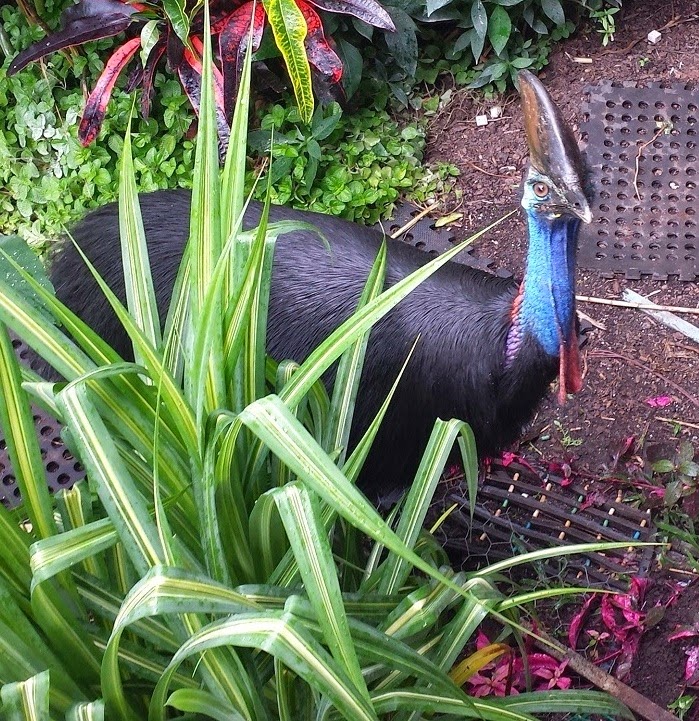 A cassowary turned up at Bill Farmsworth's house at Coquette Point this week and it looks like Dot. The distinct markings and shape of the casque is similar to Dot's. However Bill could not get a good shot of the wattles to confirm the ID. If it is Dot it is the first sighting in 18months. Bill had hung a bunch of bananas under his house to ripen and Dot found them. 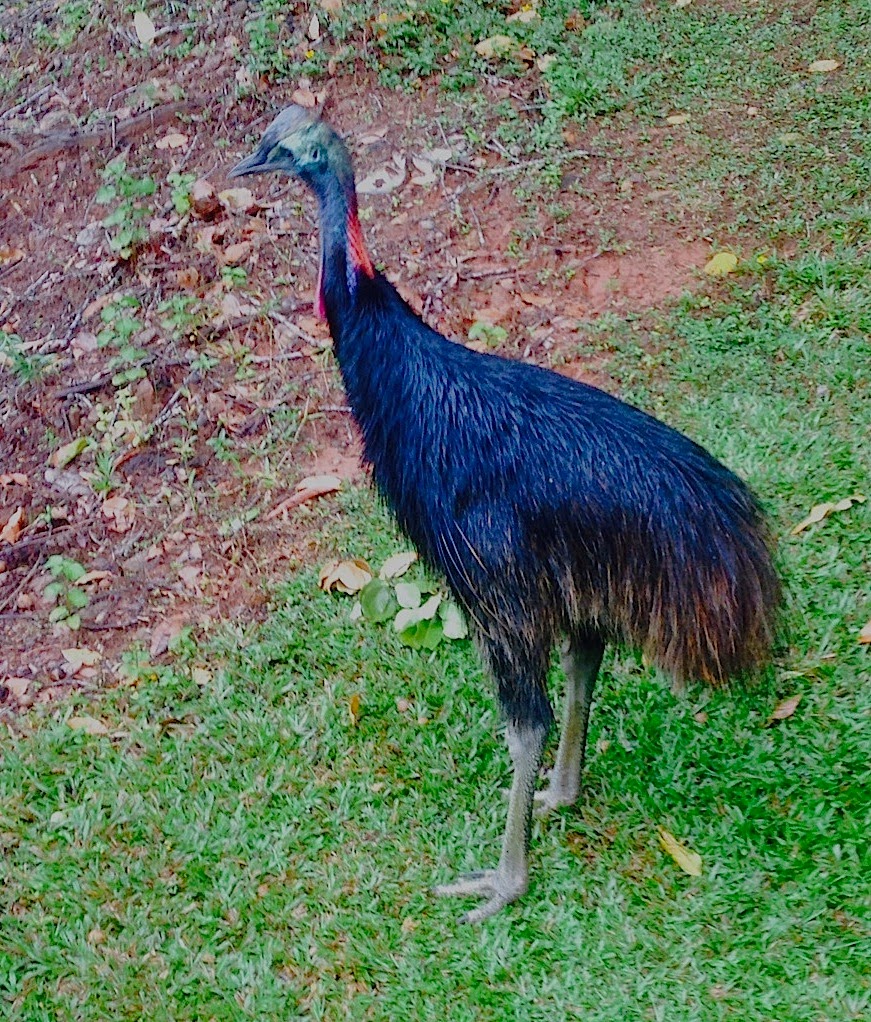 A subadult cassowary, about two years old was hanging about the Flying Fish Point School this week. The teachers and students had not seen him before. Young cassowaries seeking out a home range will swim across waterways. In past years I have twice seen a cassowary swimming the Johnstone, and here at the mouth where it is very wide. This young bird could have come from Ella Bay or Coquette Point. Unfortunately the school is a busy traffic zone and hopefully he will find safety in the Mount Annie National Park and stay away from the road. 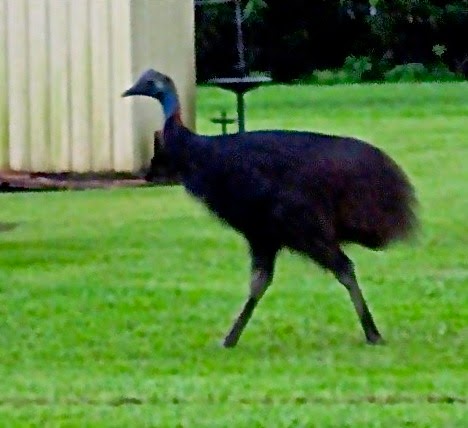 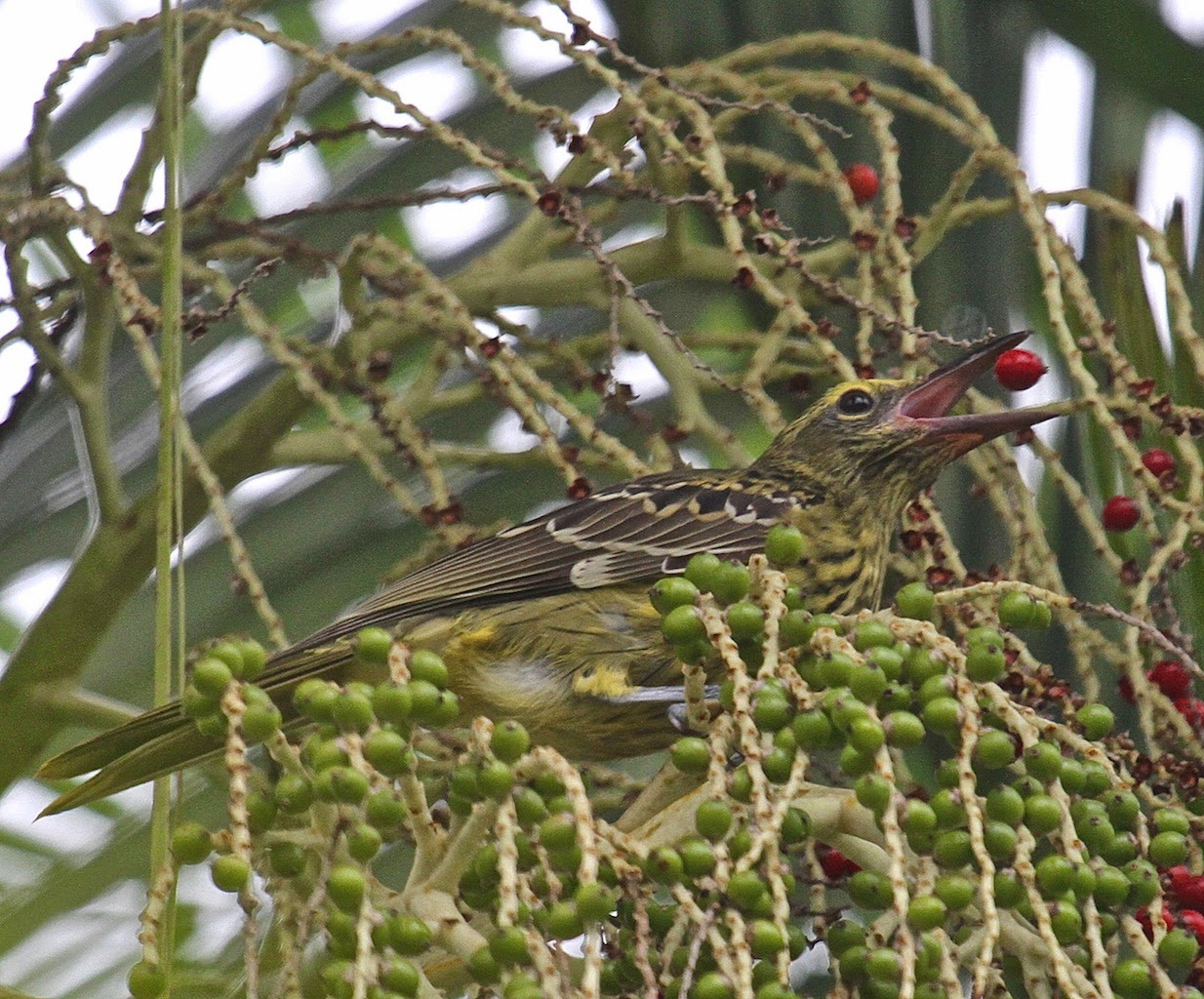 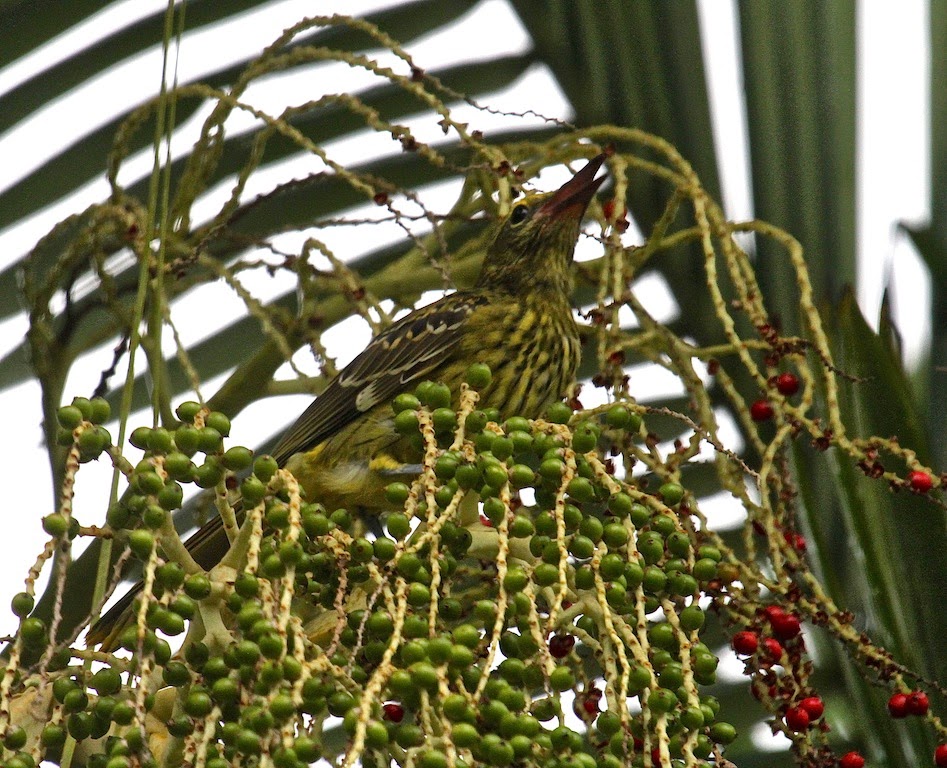 The yellow orioles, which are nomadic within their range, have arrived and their bubbly call sings out from early morning to late evening. Again the prolific Alexandra Palm, Archontophonenix alexandrae is providing a feast for oriole. He picks the fruit, tosses it in the air, catches it and swallows. He seems to have great fun and happily sings as he feasts. 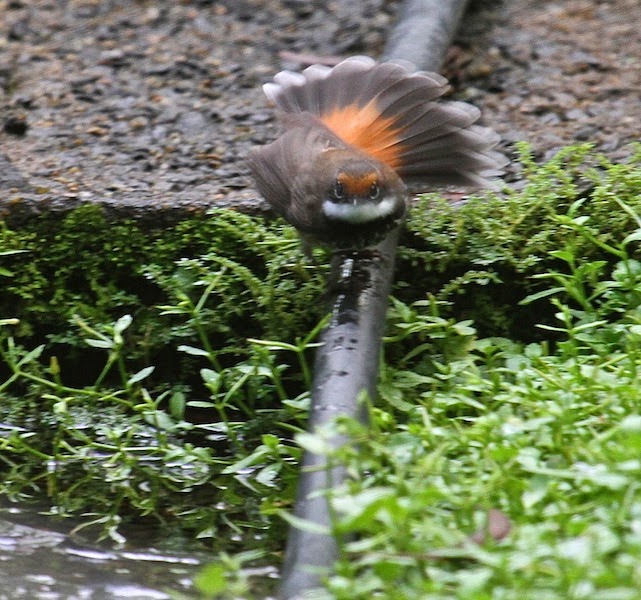 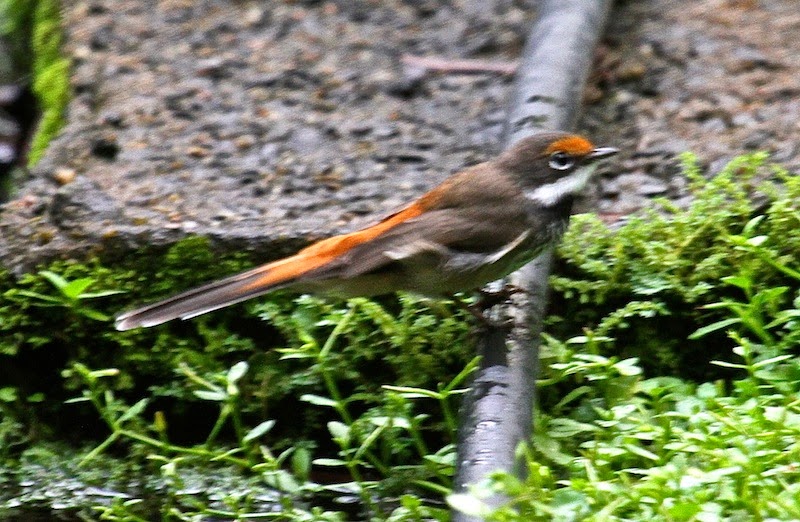 The little rufous fantail has arrived from south to winter in FNQ. In spite of the cool, windy weather all this week he has still taken a daily bath in a puddle in the nursery. This is one of the most delightful of little birds and fascinating to watch as he feeds on the forest floor dancing and fanning his tail to flush out insects. 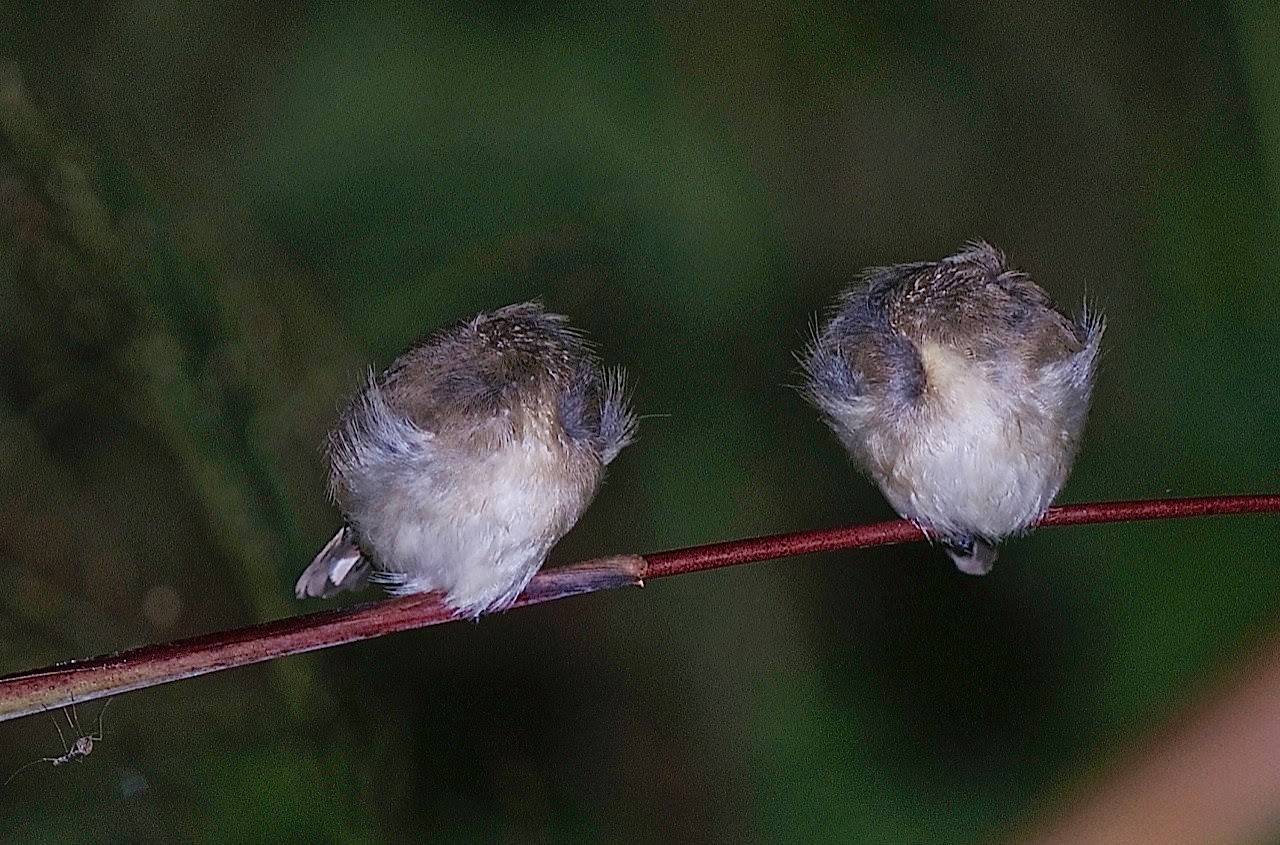 My friend Ian Laidlaw from Tupeki on the Palmerston Highway likes to go out at night with his camera and spy on animals. He woke these two little silvereyes who were all tucked in for the night. You can almost hear them say 'Go away Ian'. 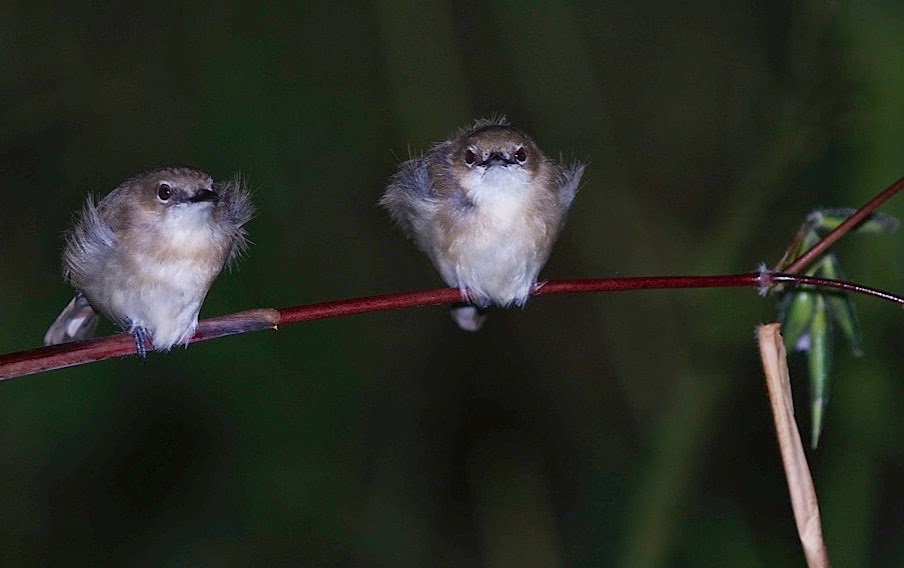 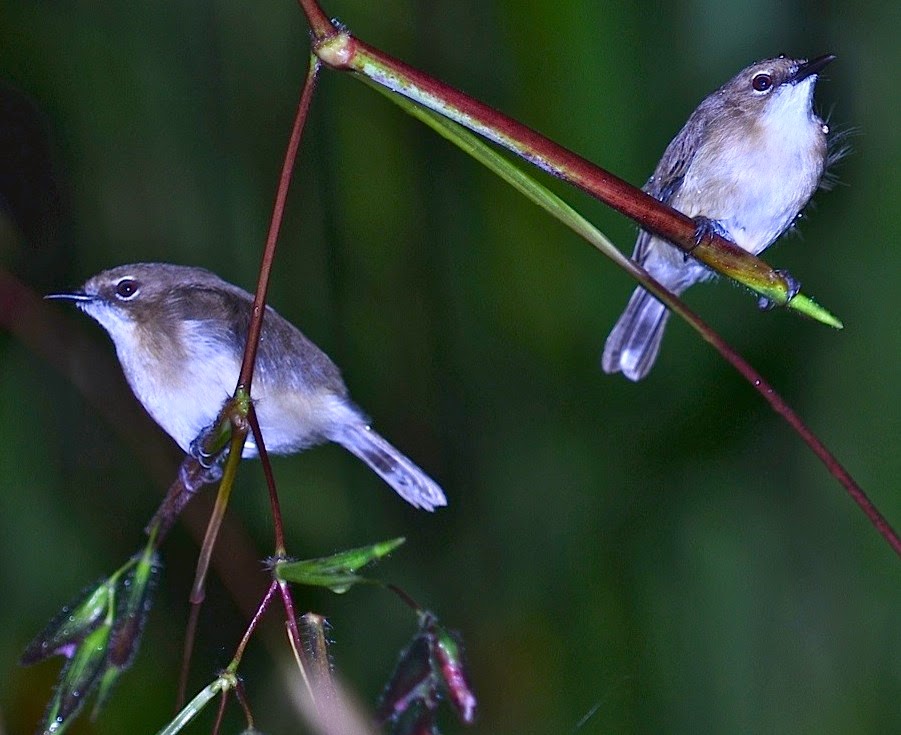 The next morning they were in a better mood.
The female shining flycatcher has been very vocal and active this week, but no sign of the male. 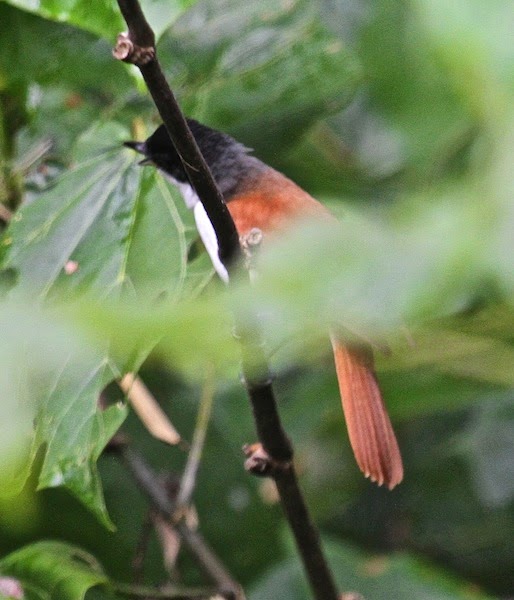 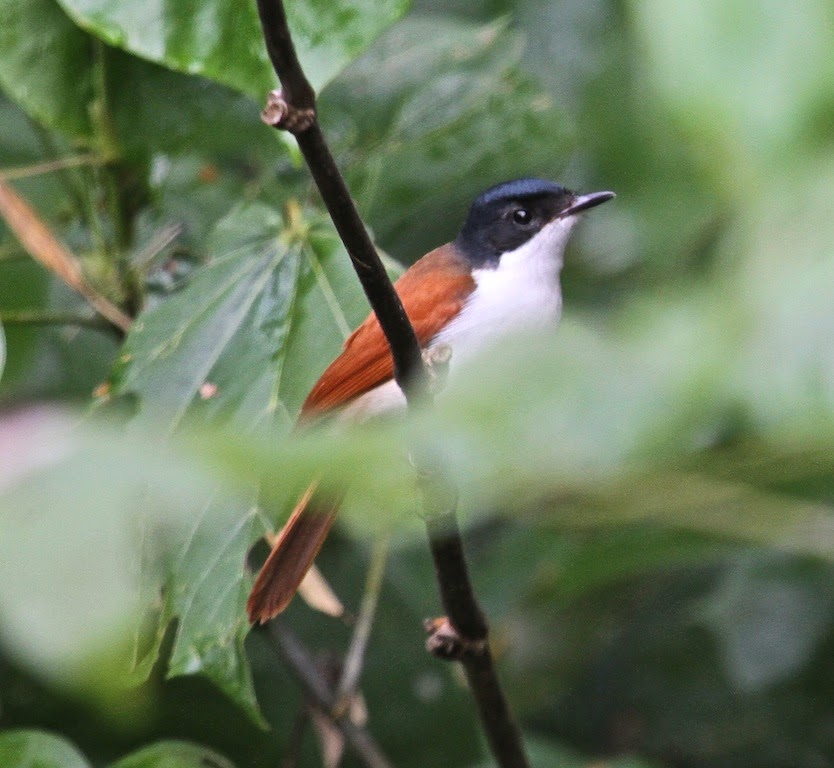 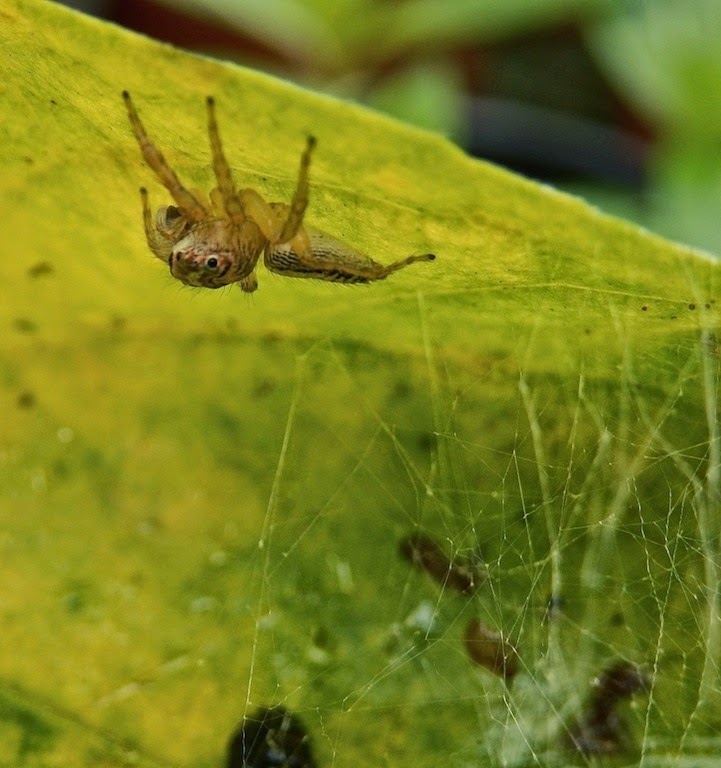 Jumping spider is still in her retreat, but the leaf from which she has formed her home is starting to turn yellow and I think will soon fall. However, at the moment it is keeping her dry and with the heavy rain this week she has taken to resting upside down from the roof of her retreat. I have not seen her hunting or away from the retreat at any time. 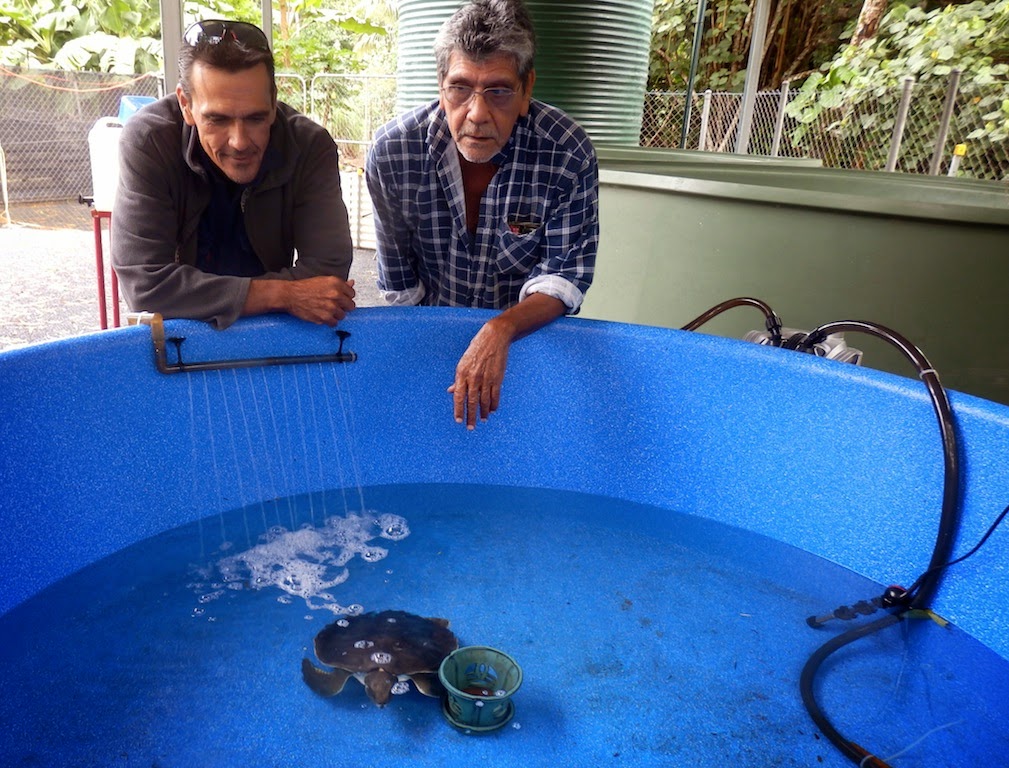 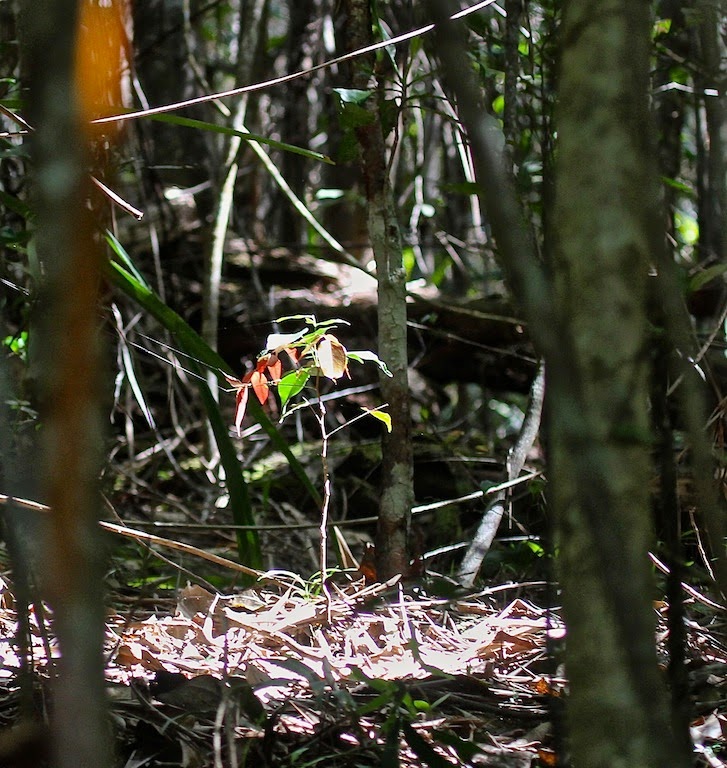 For a few minutes, and only on some days this week, the sun shone through a gap in the grey clouds. At one such time I saw, deep in the rainforest, a circle of sunlight bathing a sapling.   With all the doom and gloom of the Federal Budget this week I hope you can find a ray of sunlight to brighten your day.    Cheers for this week, Yvonne.