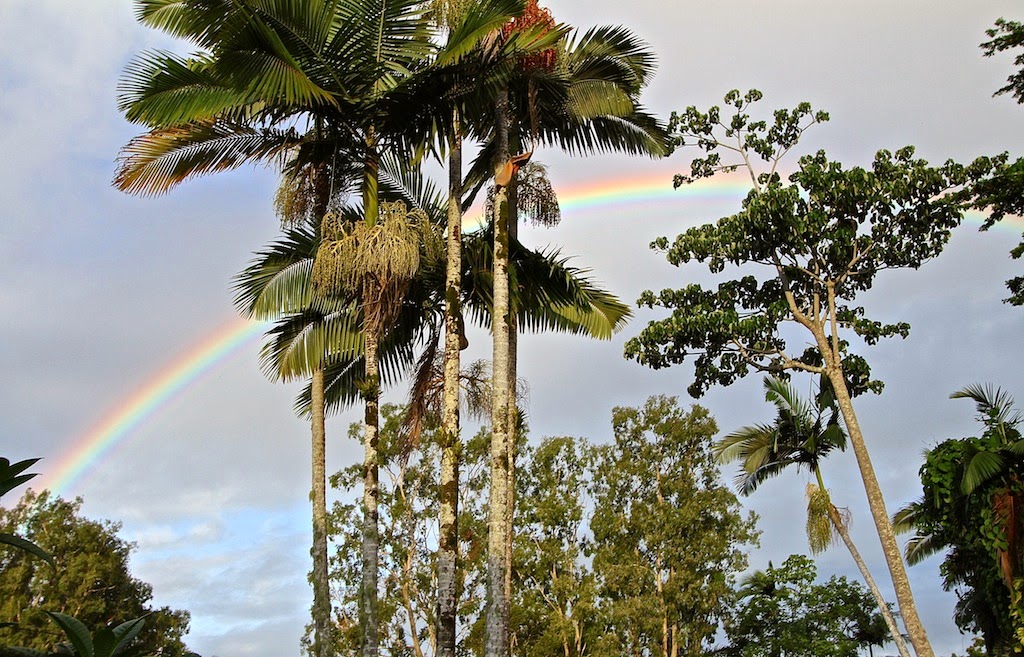 A rainbow spread across the mouth of the Johnstone River on Wednesday signalling the end of a month of rain. Thursday was a perfect day, low humidity and a gentle tropical breeze.

The Feast of the Senses, Taste Paradise function held at Coquette Point was a great success: helped of course by perfect weather. 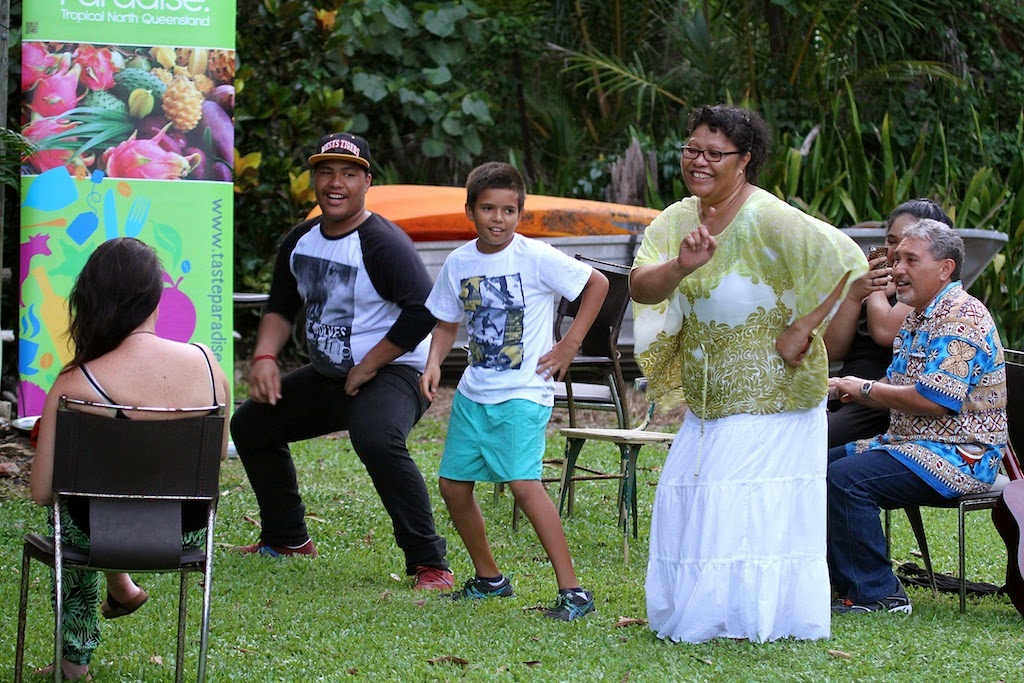 We dined on a selection of tropical dishes of quality and variety to astonish the most experienced foodie.


The late afternoon was brought to a close with evocative Pacific Island songs and dances performed by James, Lohar and family from the Tokelau Islands. 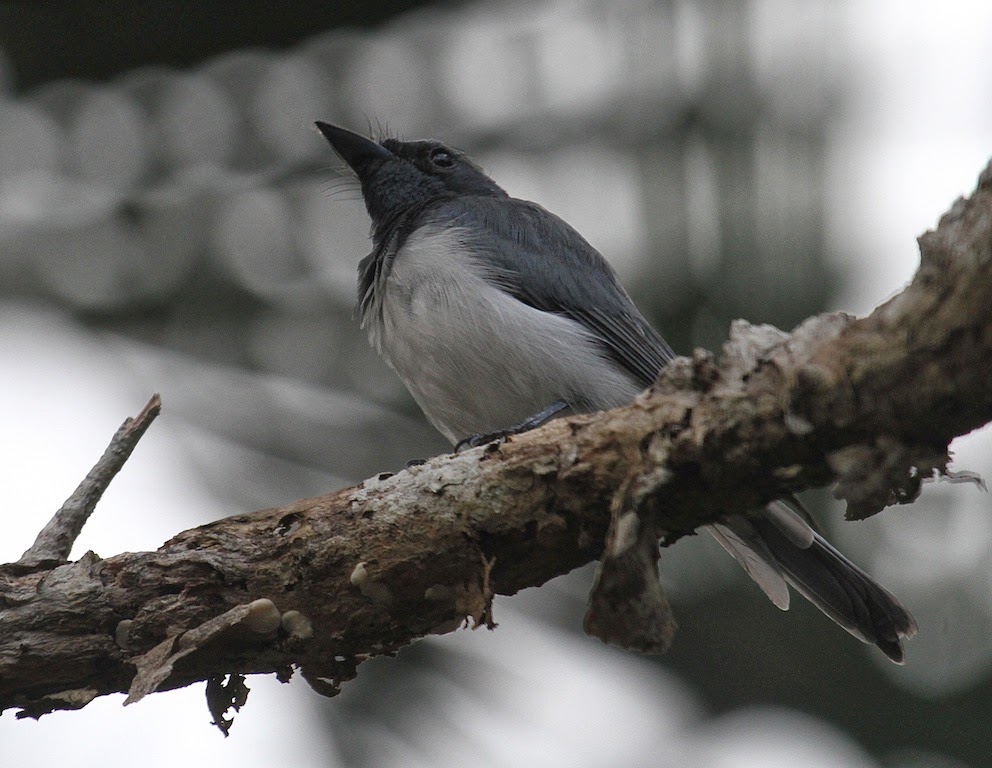 The leaden flycatchers have arrived to winter over in FNQ.  Although I have seen several males the females do not appear to have arrived.

As yet the calls have not taken on their harsh notes and the boys are spending their days in the mangroves and swamps searching for insects sweetly whistling too-whit, too-whee in a very pleasant tone. No doubt this will change when the females arrive. 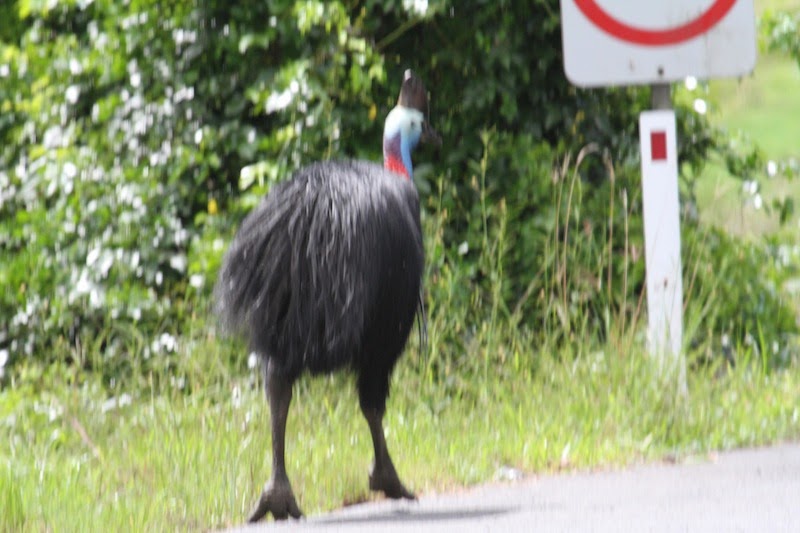 Driving home from town this week I saw a cassowary walking down Howe Street towards Coquette Point. I stopped the car and with the camera in hand kept a look out for any cars.

I did not recognise the cassowary, possibly a young female about five years old. The bird appeared to have come from East Innisfail, in the area which is the old Ninds Creek wetlands. 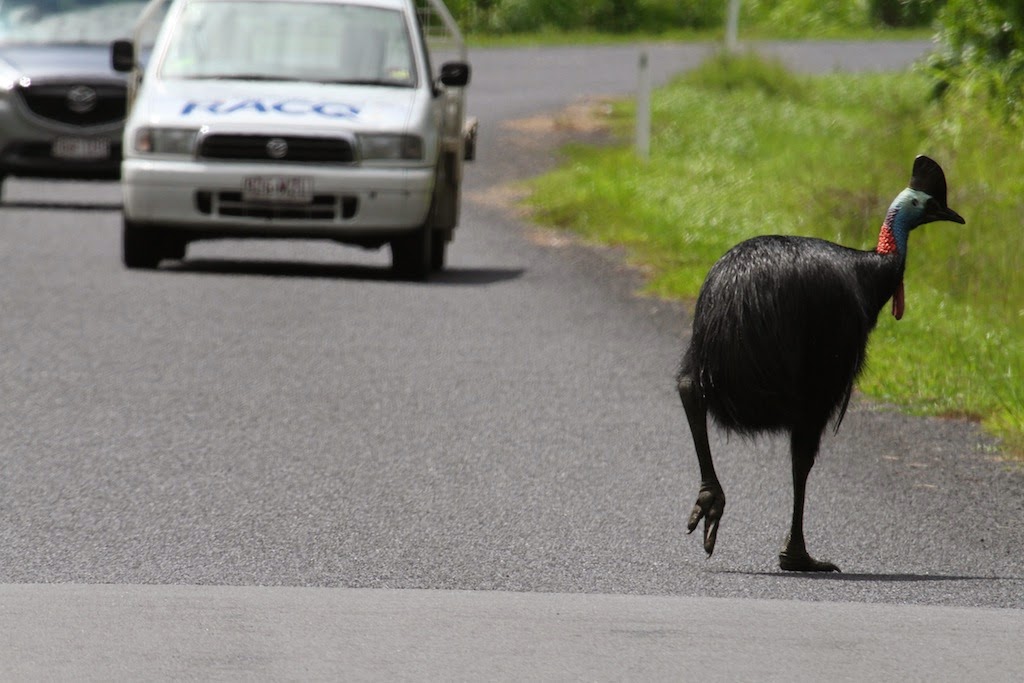 A number of cars approached coming from Coquette Point. All cars slowed and when the cassowary saw the vehicles it crossed the road in front of the cars and went into the area near the sewerage farm.

When the cars passed it crossed the road again and went into the area approved for the Metricon Canal Estate Development. 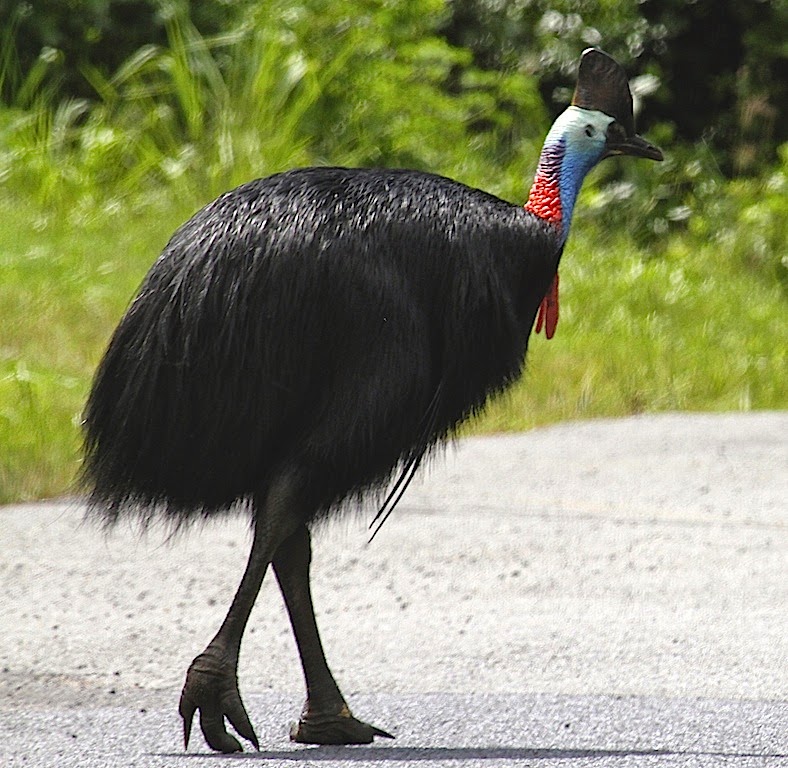 This cassowary appears in good condition and its movements are an example of the migration of these birds within the Moresby Range - Ninds Creek - East Innisfail populations.

It is imperative to mantain wildlife corridors which link different family groups of cassowaries for the future development of a genetically healthy population. Unfortunately very few safe migration corridors exist in the Wet Tropics for this endangered bird. 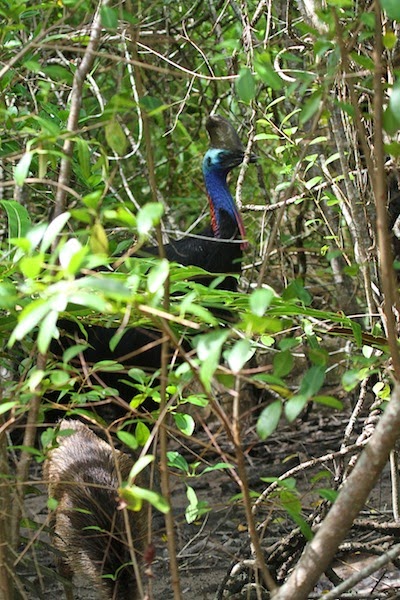 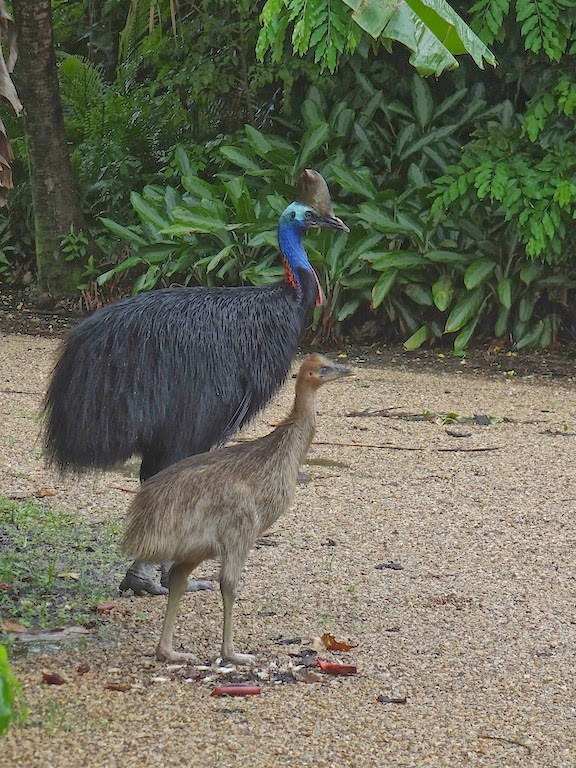 Cassowary Ky is growing fast and Snout is a very attentive father.

I saw Snout and Ky in the mangroves and when Ky saw me she hid behind a branch; her now brown colour the perfect camouflage. 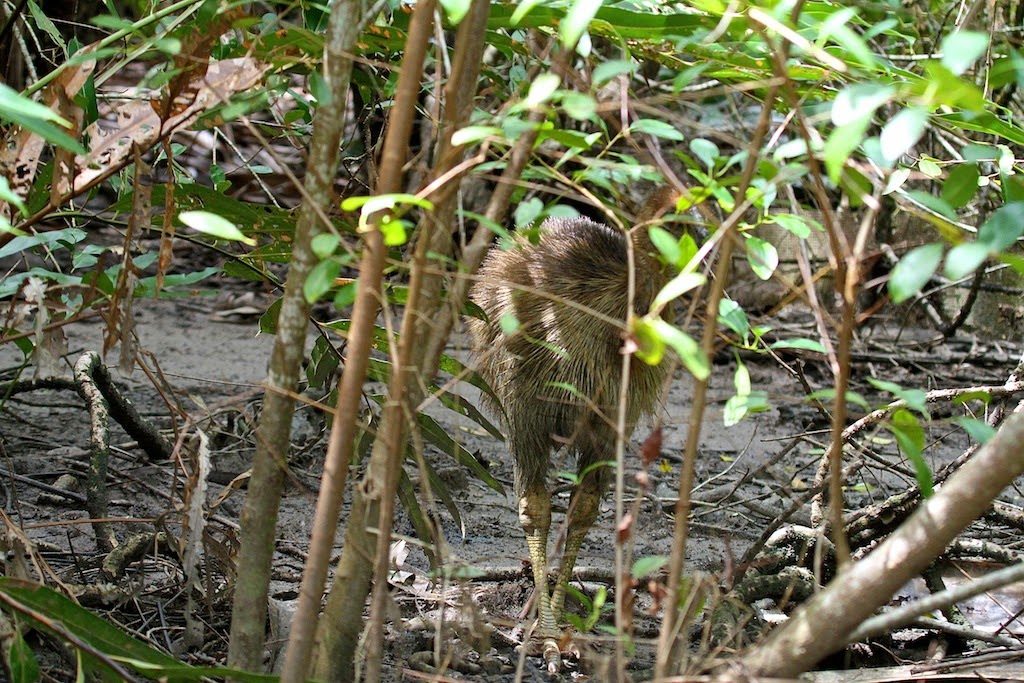 It was very hot today and Snout and Ky enjoyed cooling off in the stream. 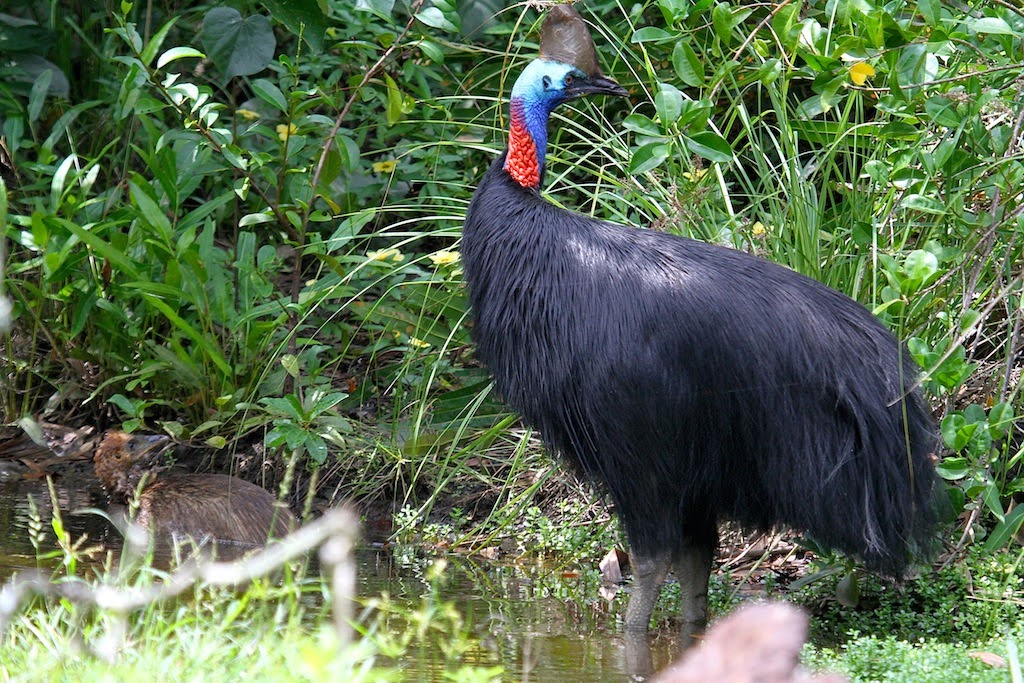 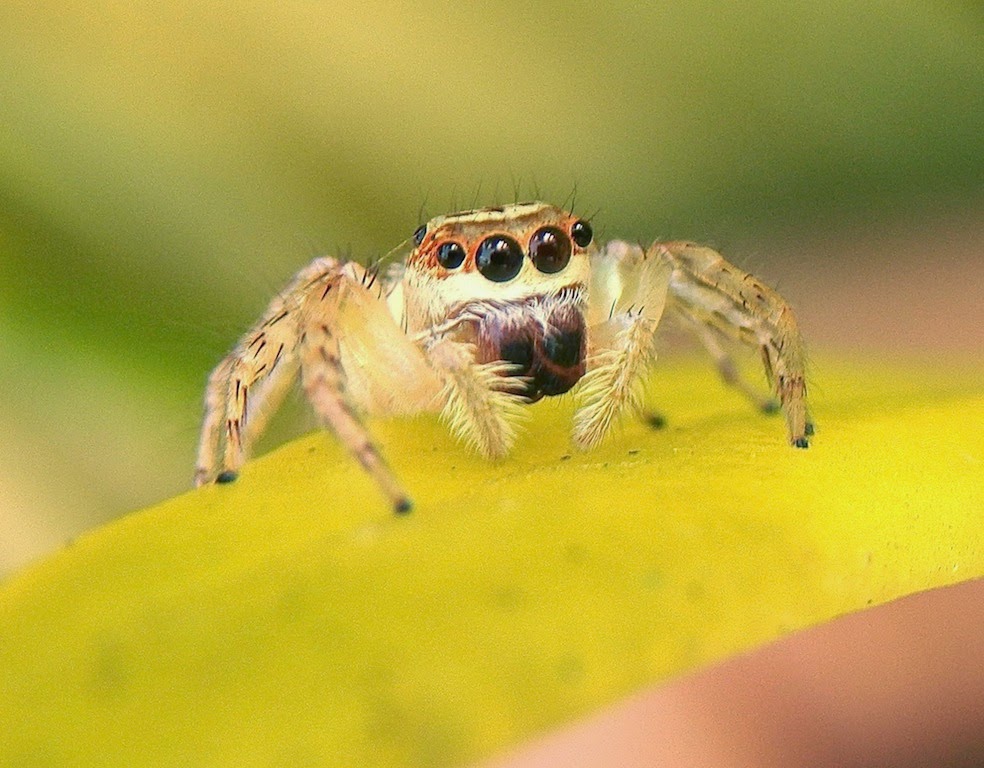 Lots of jumping spiders around this week and here's three of the eight different species I saw this week. 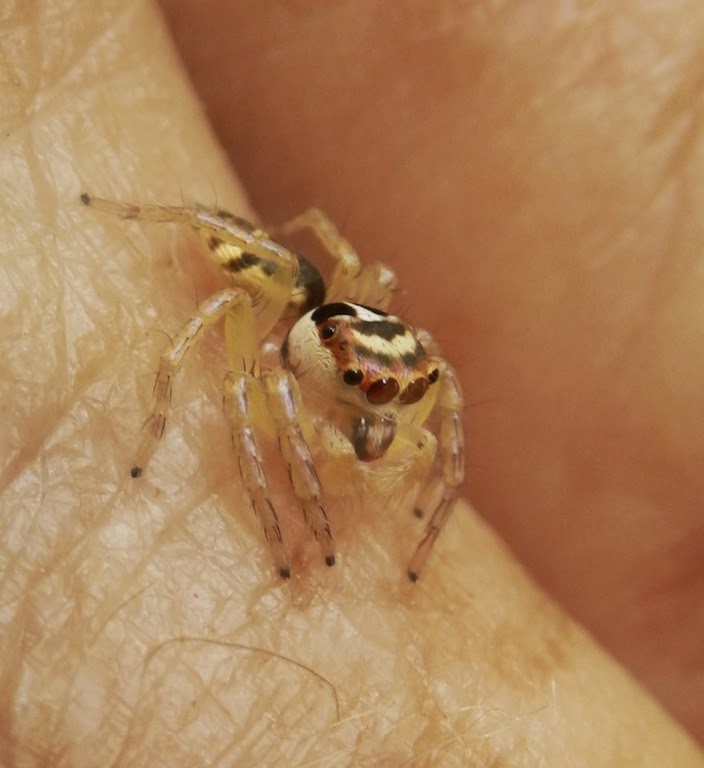 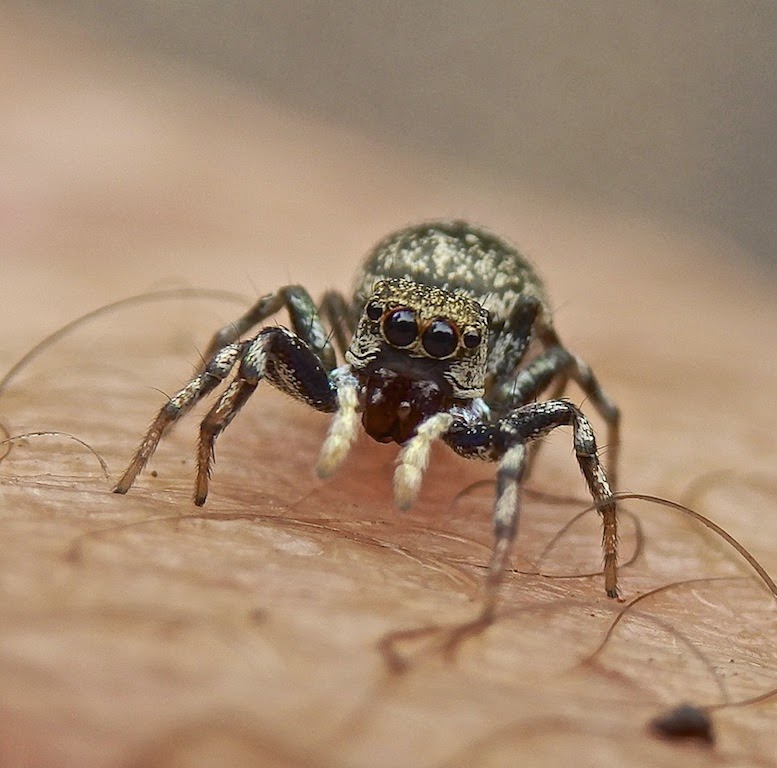 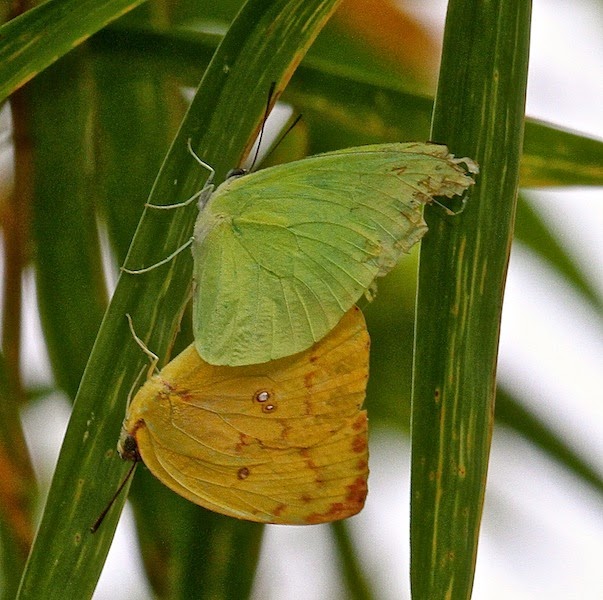 In the hot humid weather today the lemon migrant butterflies were mating, some on the wing others exhausted with the effort and continued their union while resting on leaves. The females are generally more colourful so I suppose that is 'her' in orange garb below.

When the rain stopped on Wednesday the birds took it in turn to dry and preen on the branches of the old dead trees. 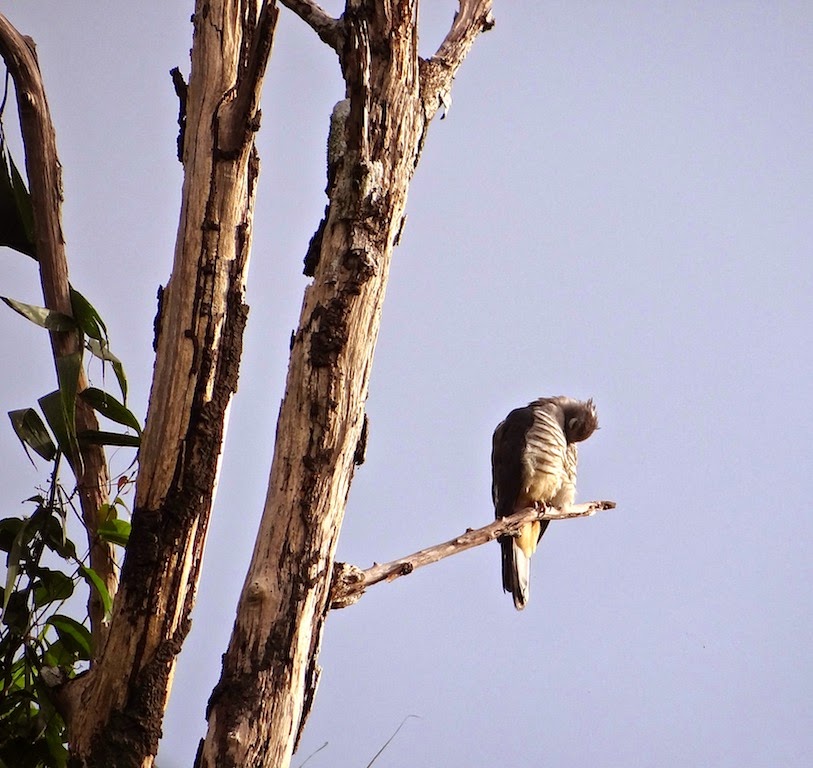 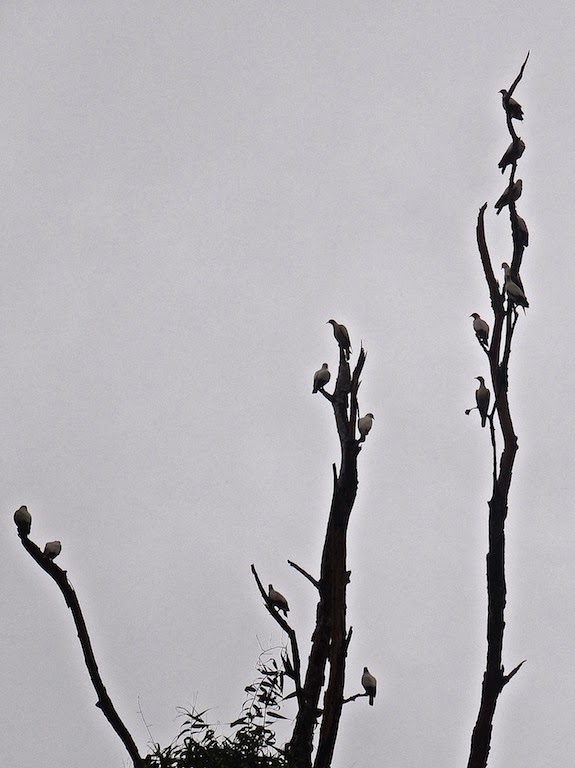 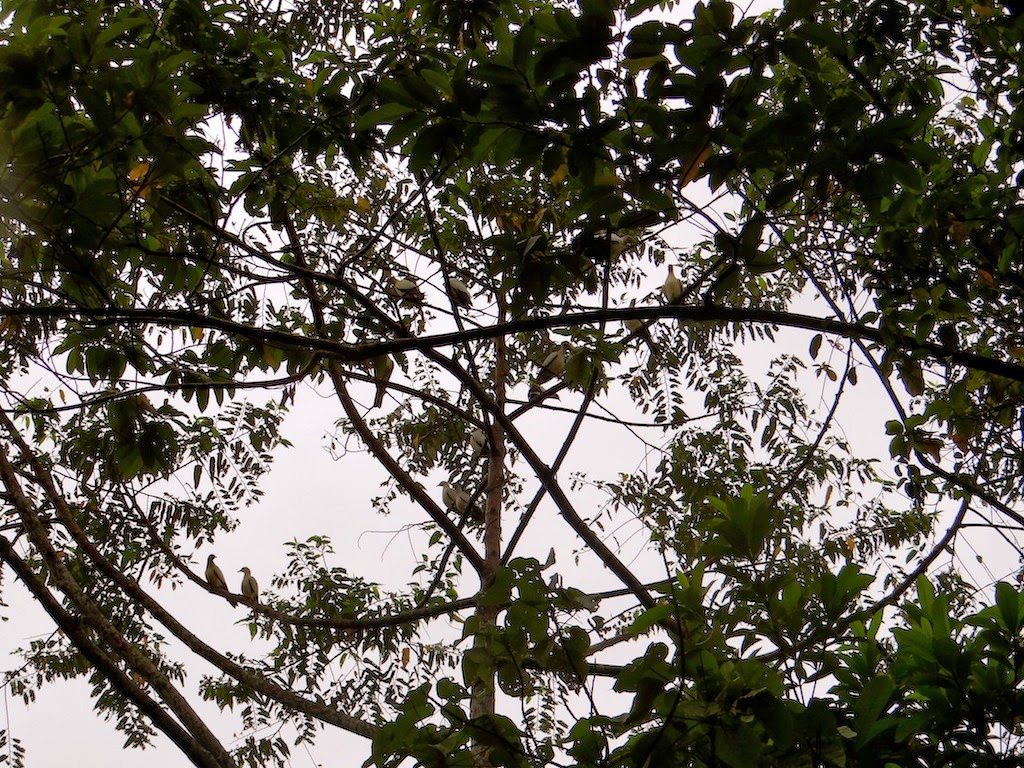 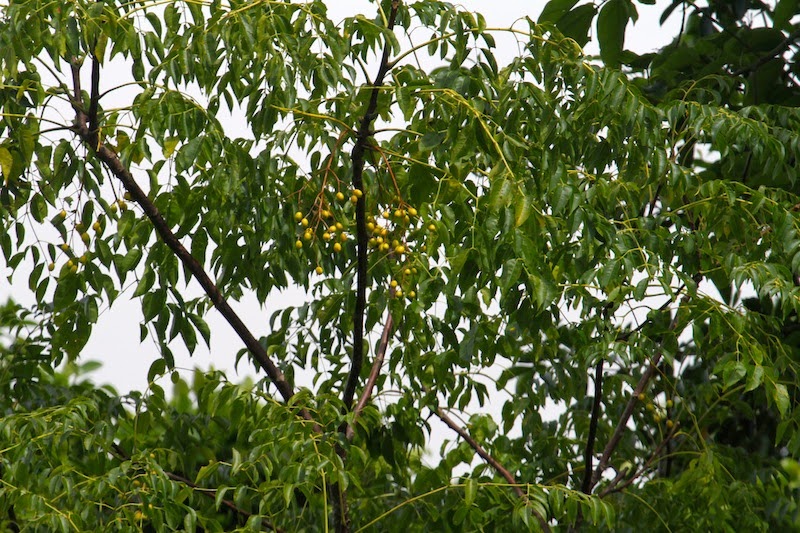 While today in the heat the Pied Imperial Pigeons rested from the midday sun in the shade of the canopy. 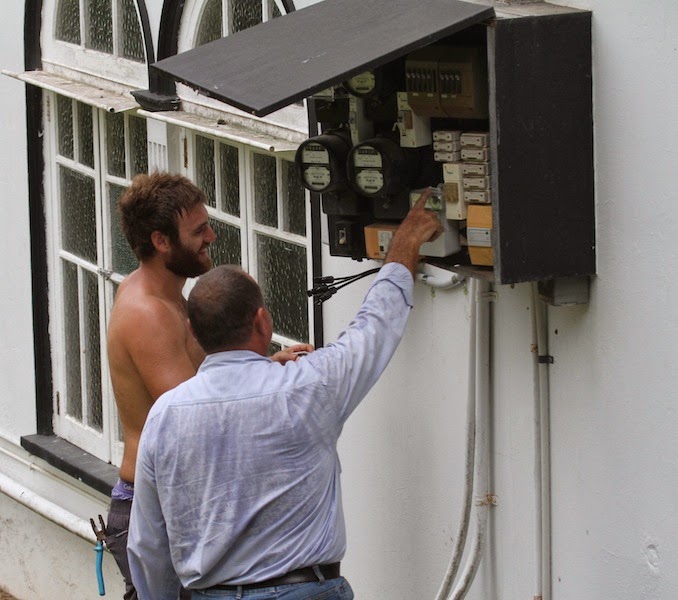 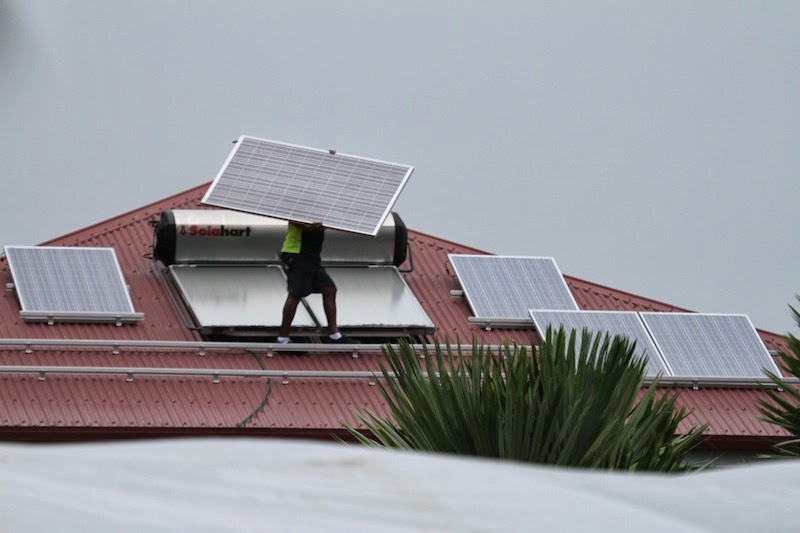 This week I bit the bullet and had full solar power installed.  Of course nothing is ever as easy as it seems and I discovered the power board needs a full upgrade.
It was Deja vu for Innisfail electrician Don Clark when he looked at the board with its asbestos backing. Don installed the board when he was an apprentice 40 years ago. As Don said in those days no one knew about asbestos and they cut and drilled it all the time! Australia along with many countries is living with an asbestos legacy that is fast catching up with workers in the building industry.

Tonight, as part of a climate change awareness campaign we are all being asked to turn our lights off for one hour from 8.30 pm. The Australian campaign focuses on the Great Barrier Reef and the irreversible effect our modern way of life is causing to the Reef and the environment generally.

While the lights are out take the time to look at the sky. 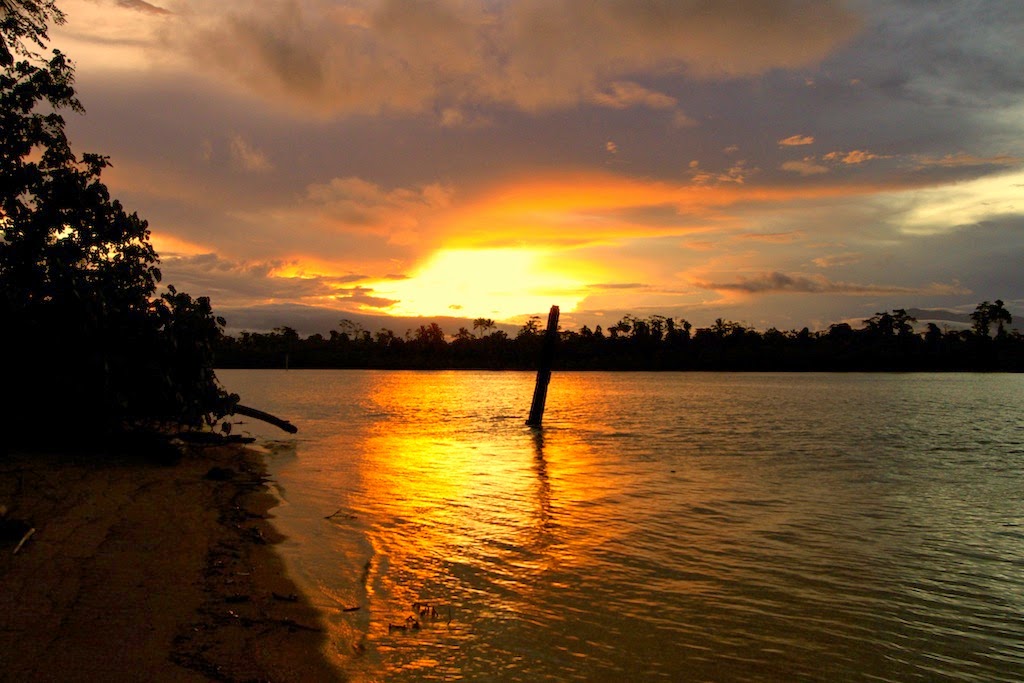