Hello from the Wet Tropics of Coquette Point, 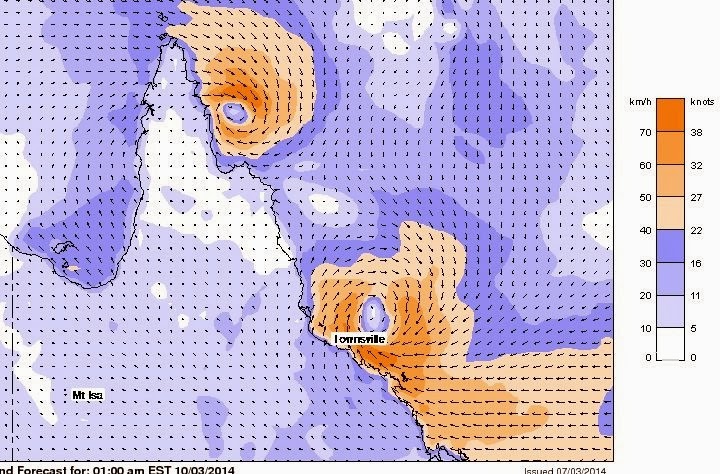 Tonight we are watching Tropical Cyclone Gillian now in the Gulf of Carpentaria 265 kilometres west of Thursday Island and moving east southeast at 12 kilometres per hour towards the coast.  Another system  is slowly intensifying and may develop into a tropical cyclone on Sunday.  It is an extremely rare event to have two cyclonic systems about to impact the Queensland coastline at virtually the same time. These two circulations will make meteorological history and time will reveal their impact on  Queensland.  The models differ in where these systems actually will make landfall. Whichever way, they are not expected to build into severe cyclones.  However, we will experience gale force winds and very heavy rainfall along the coast over the next few days. Unfortunately this rain is not expected to penetrate into the drought affected areas of western Queensland.  The map shows the possible position of the lows late on Sunday.

The outflow of high cloud from these monsoonal systems is creating spectacular sunsets and the light displays are continuing well into twilight. The photo below was taken at 7pm Friday evening, low tide, on the banks of the Johnstone River. The old derrick from the Dvorak wharf can be seen on the left. 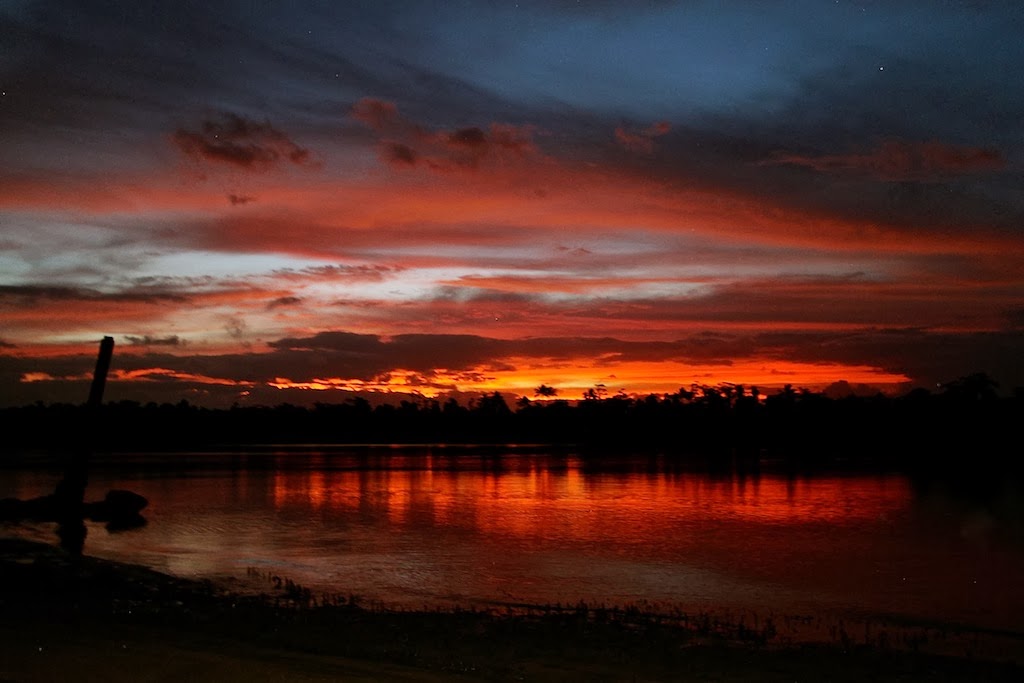 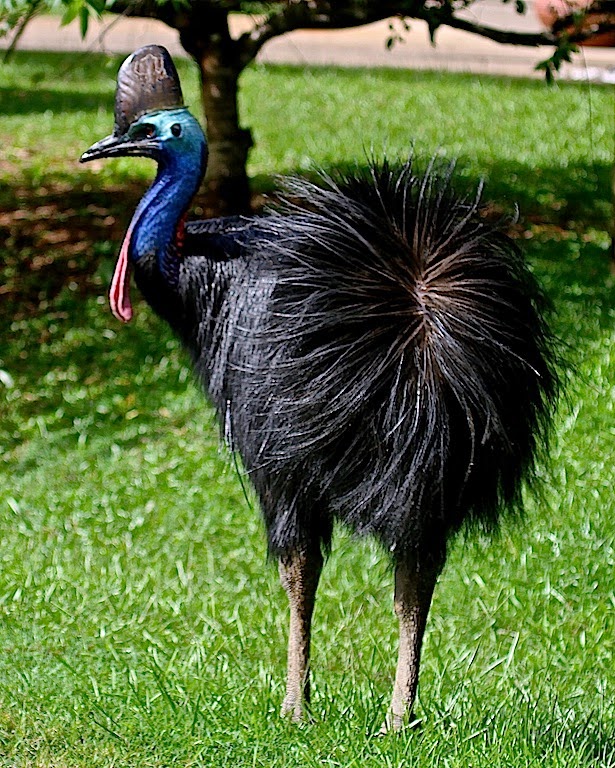 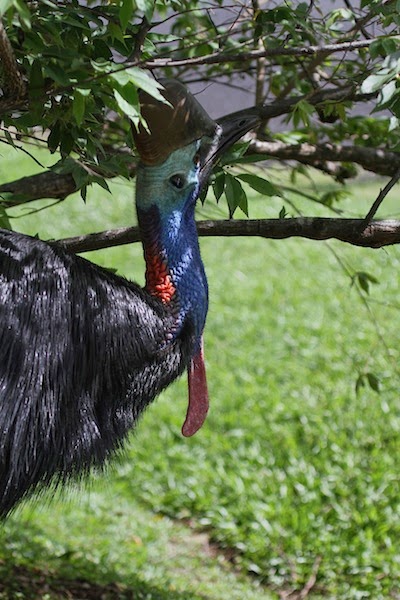 All this week we have experienced strong wind as the large high in the Bight combined with the low pressure of the monsoon trough combined to create a strong ridge along the Queensland coast.

The strong winds splayed cassowary Rosie's feathers exposing a bare bottom, but did not stop her feeding on Panama berries.

Matriarch cassowary Jessie strode through the orchard on Monday. The last time I saw her was late January and there were no reports of sightings of her in February. It is normal for Jessie to disappear for a month or two each year, during this time she remains somewhere deep inside the Moresby Range National Park. Hopefully, she is enchanting some of the young male cassowaries that have not been sighted for months such as Q, Dot, Stumpy and Captain Starlight. This week Jessie has been seen at the western end of Coquette Point, near the Ninds Creek bridge in the early morning and by lunch time she has been seen at the top of the Moresby Range. Cassowaries can move long distances in a very short time. 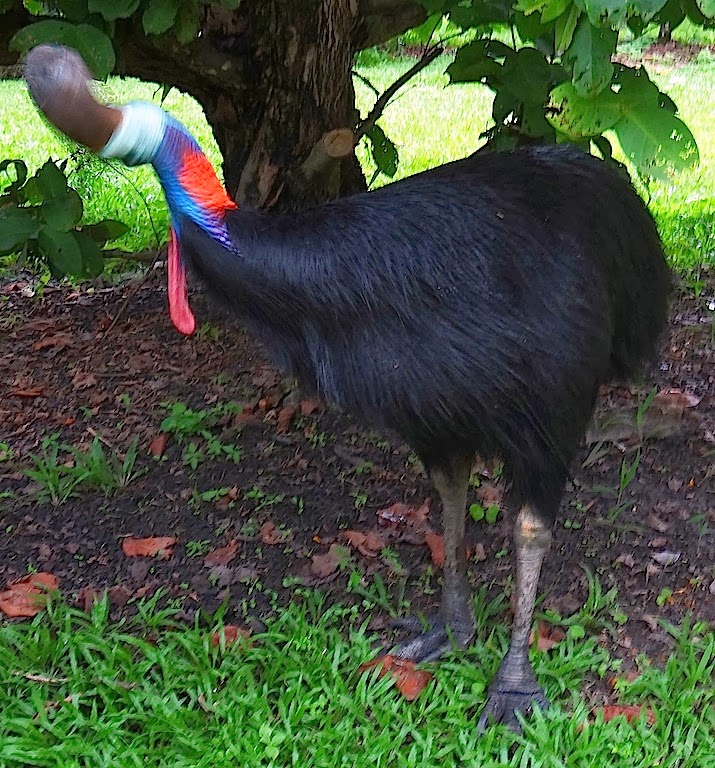 I watched Jessie as she stopped to rest under the Wax Jambu tree. She was covered in mosquitoes and shook her head, twisting her neck seemingly like a corkscrew.  When mosquitoes bother Snout he picks them off one at a time. 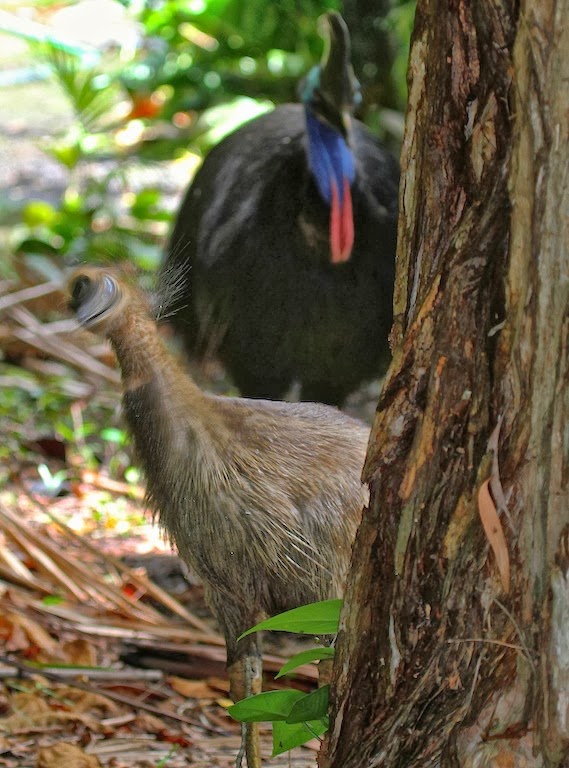 So when I saw little Ky using the same method of removing mosquitoes as Jessie one must ask, has she inherited this habit? Although Ky has seen Jessie in passing she is solely cared for by her father Snout and would not have picked up behaviour from Jessie. It is fascinating to watch the personality characterists of cassowaries and their offspring. 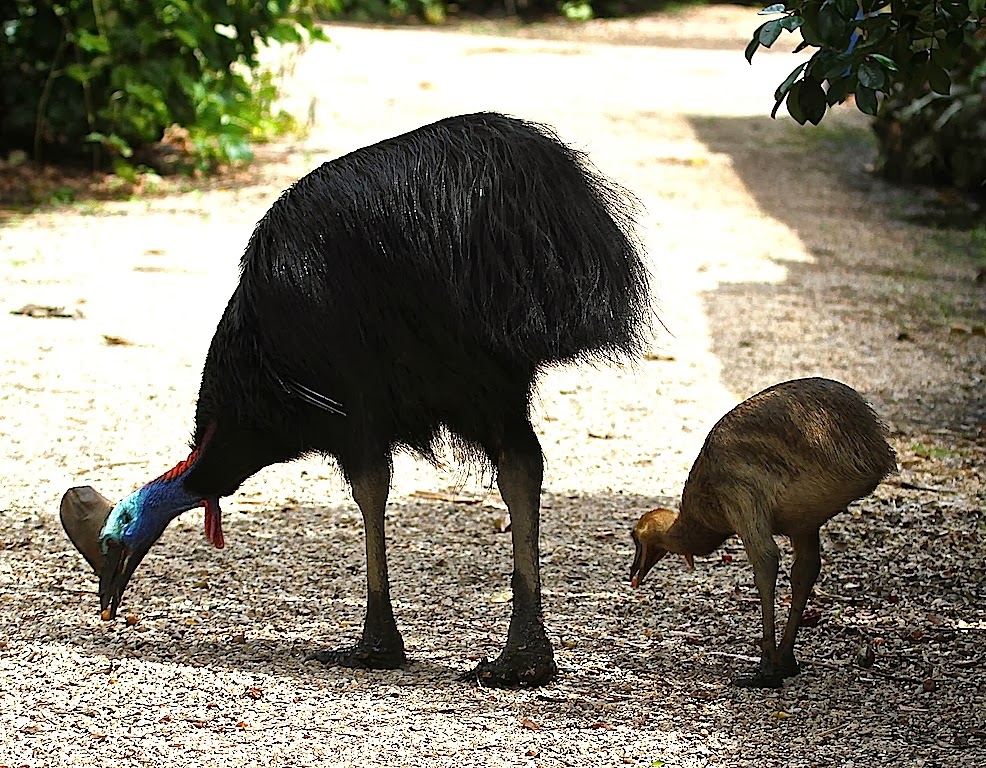 Cassowary Snout has been spending a lot of time in the mangroves this week and he turned up with Ky to feed on the strawberry guava yesterday and with very muddy feet. 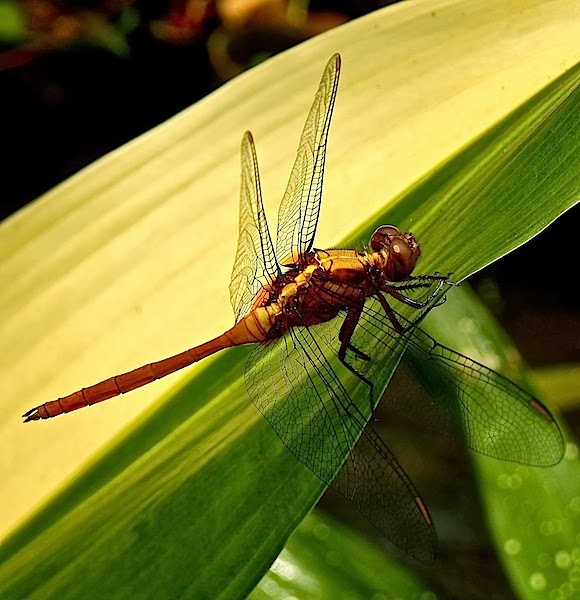 With all the rain mosquitoes numbers are increasing. Three cases of Dengue Fever have been recorded in  Marty Street East Innisfail and the Council has been fogging in the area.

Spiders and dragonflies are doing their best to consume these insets but really we need to look at breeding sites and clean up our own yards.

The mosquito which carries the Dengue virus, Aedes aegypti, does not breed in outdoor bush areas. This mosquito favours water lying around and in the house. If we cleaned up our house and yards we would eliminate all breeding sites and eliminate the Dengue virus. 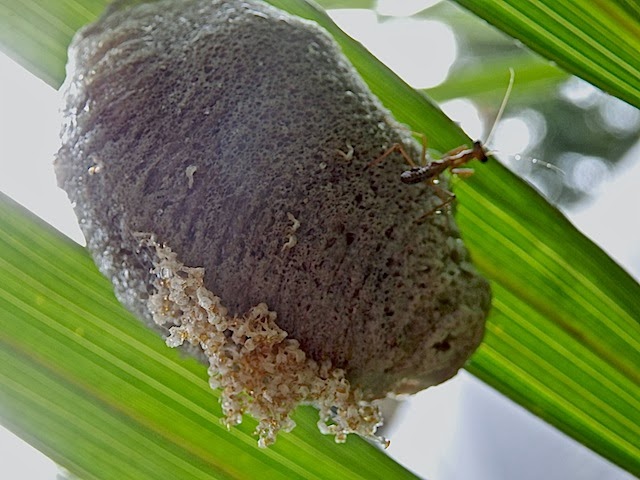 I have been watching a praying mantis egg case, ootheca, for over a month now, hoping to see the nymphs emerging. It all happened Monday morning but I was an hour too late and they were crowding the tips of the palm fronds when I checked out the ootheca around 8am. One nymph was still on the ootheca but it quickly scurried to join the others.

Hundreds of mantises nymphs covered the blades of the palm frond. 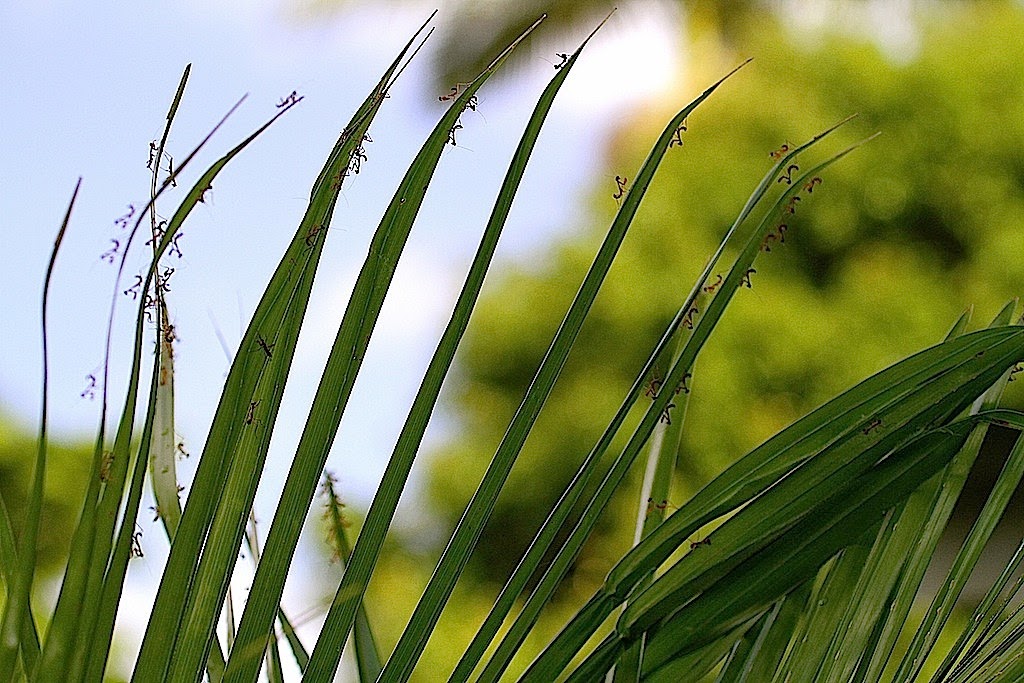 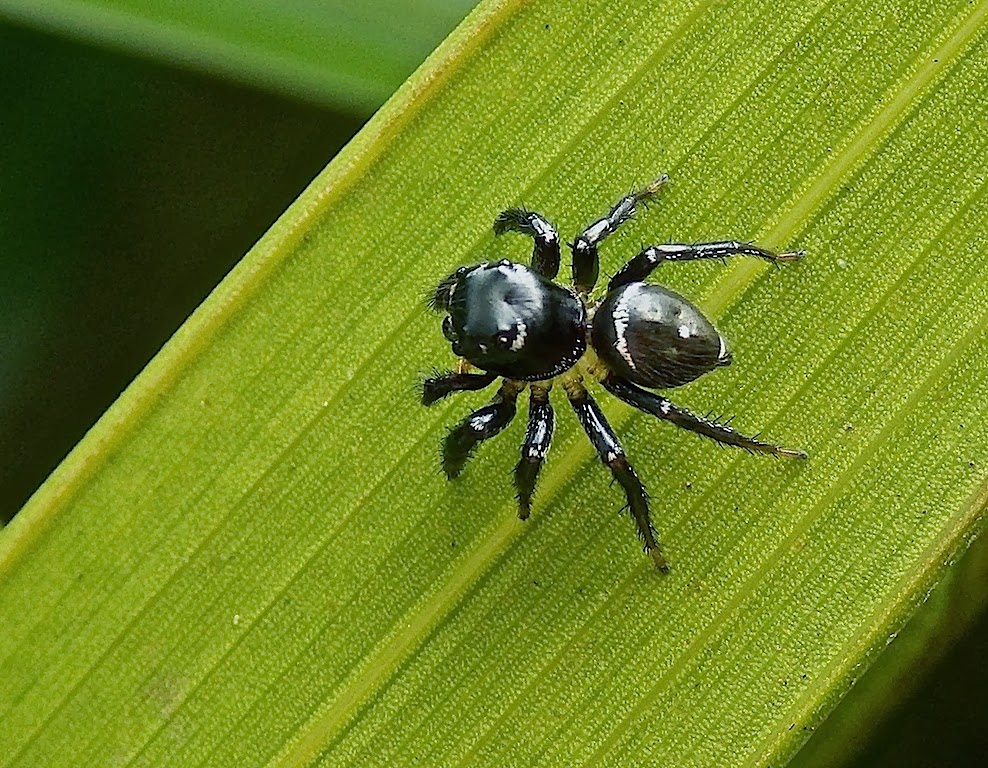 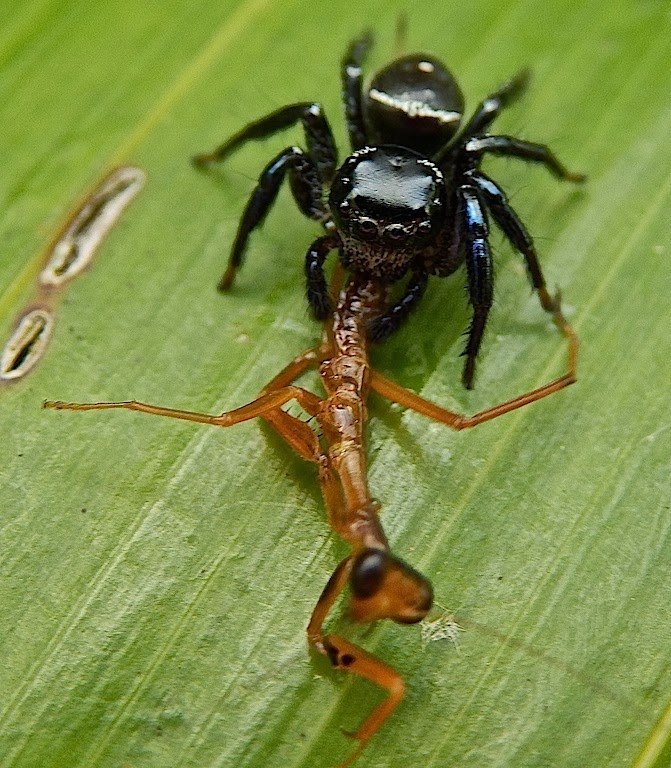 As I watched a jumping spider appeared, it was a small Zenodorus orbiculatus. He ran along the palm frond and jumped at a nymph and missed, he jumped again and missed again. On the third pounce he landed on a mantis nymph and grasped it by the tail and proceeded to consume the struggling baby insect. 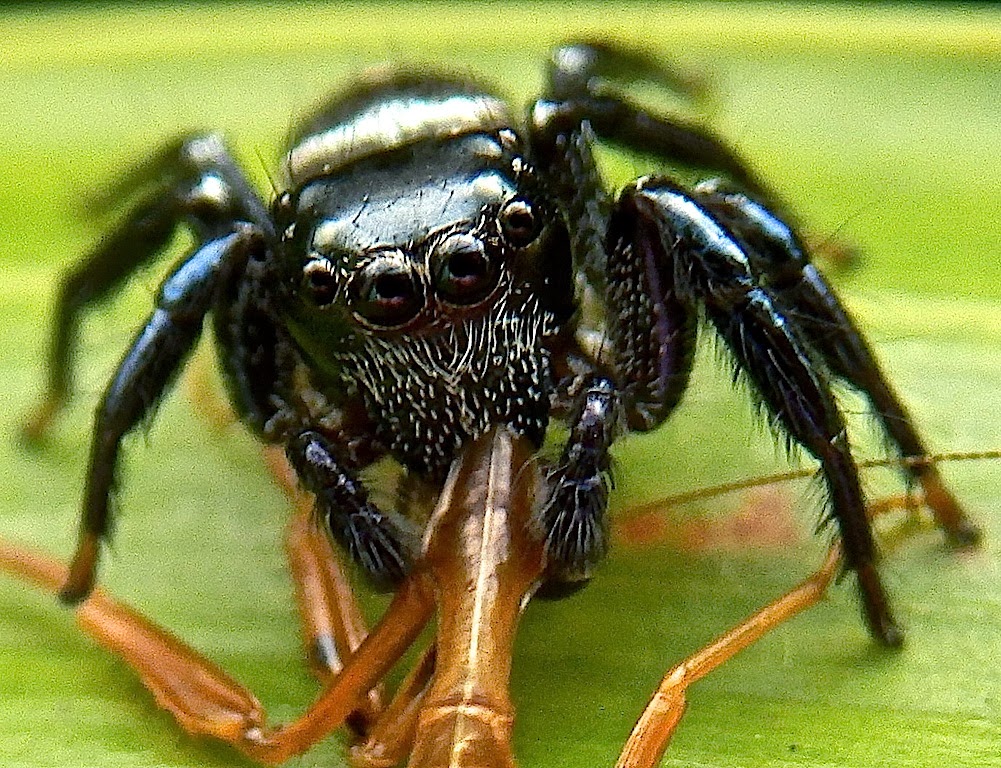 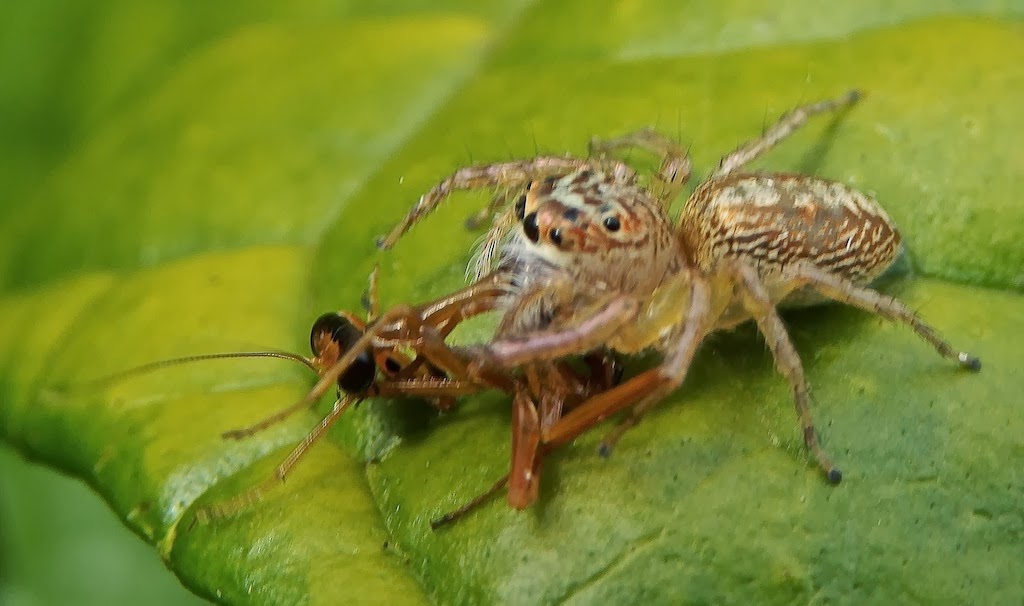 Soon Z. Orbiculatus was joined by a large  Opisthoncus polyphemus which captured a nymph in the first jump, but it was a bit easier as this nymph was sitting on a larger leaf.

The jumping spiders ate only one nymph each then disappeared. Several hours later I returned to check on the nymphs. I found Mr and Mrs Mopsus mormon with very satisfied looks on their little faces. There still seemed to be hundreds of Mantis nymphs on the palm fronds and other plants. 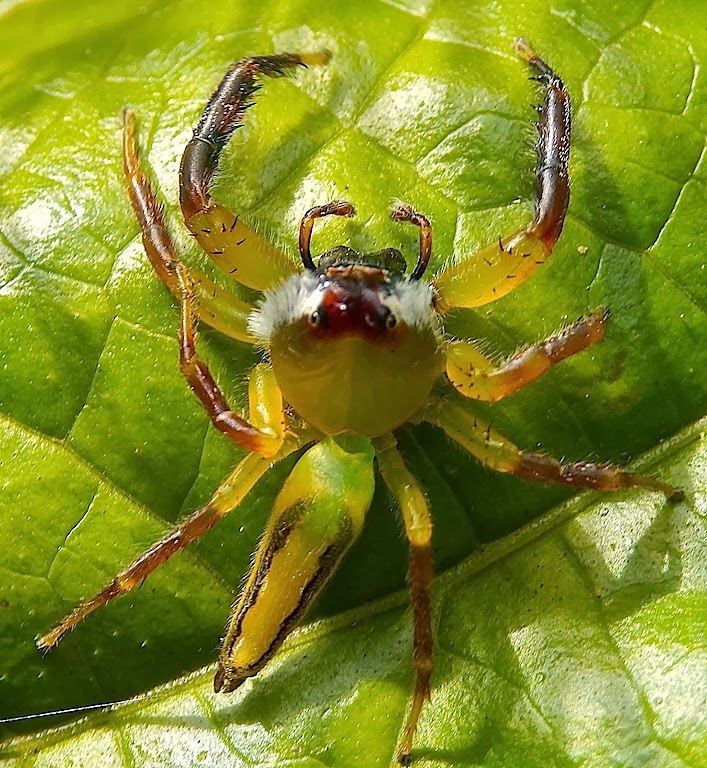 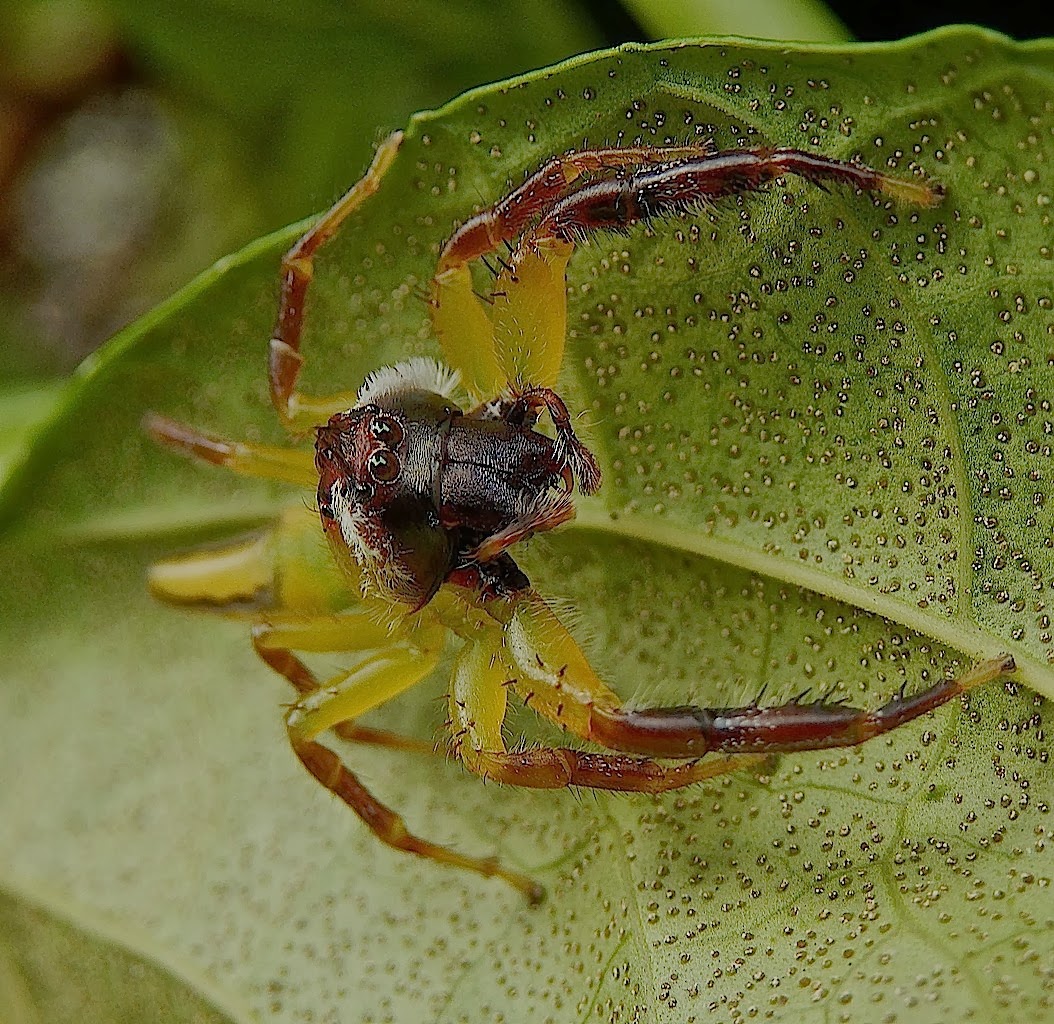 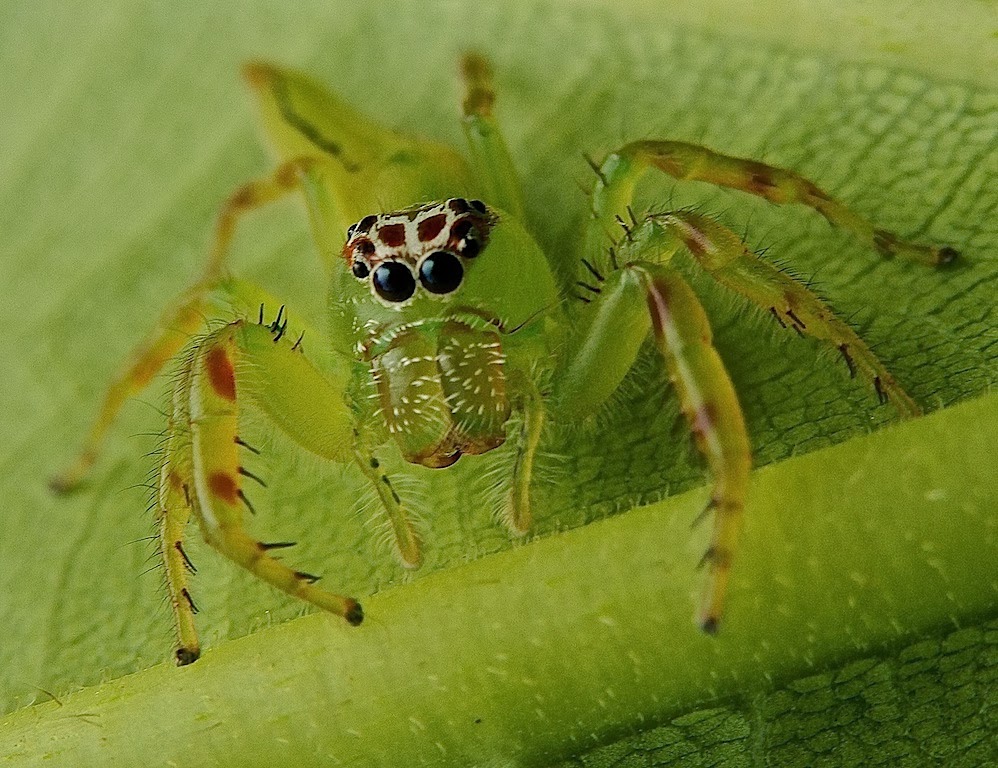 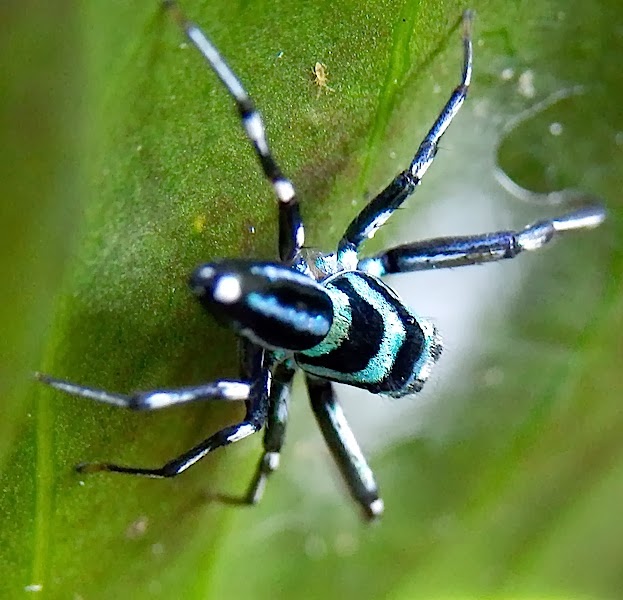 On the same afternoon I saw a male Cosmophasis micas, above left and two other very small jumping spiders, unidentified, about 1mm.,  they could be juveniles. 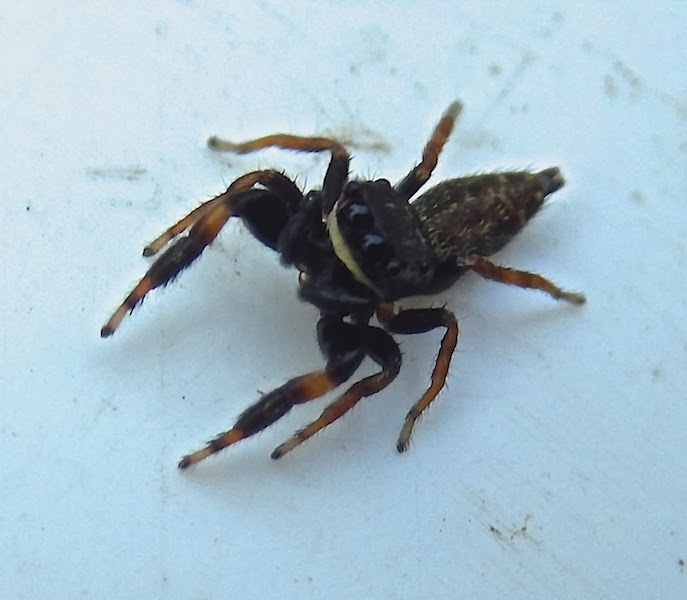 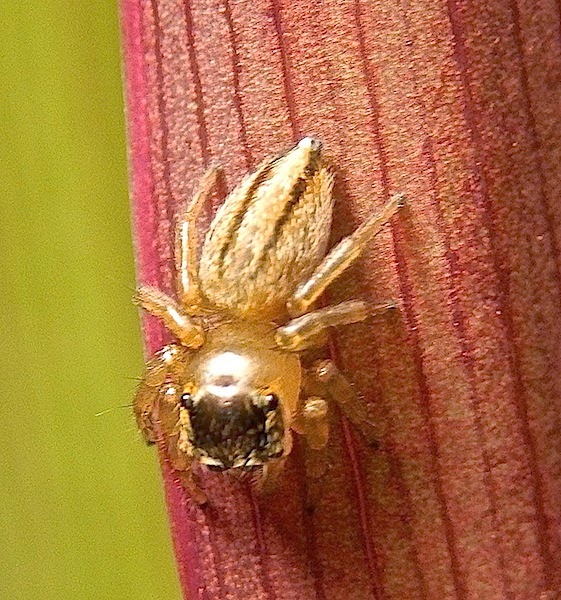 There was no sight of any of the Mantis nymphs the next morning. 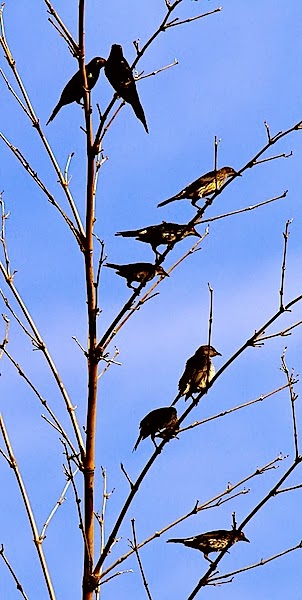 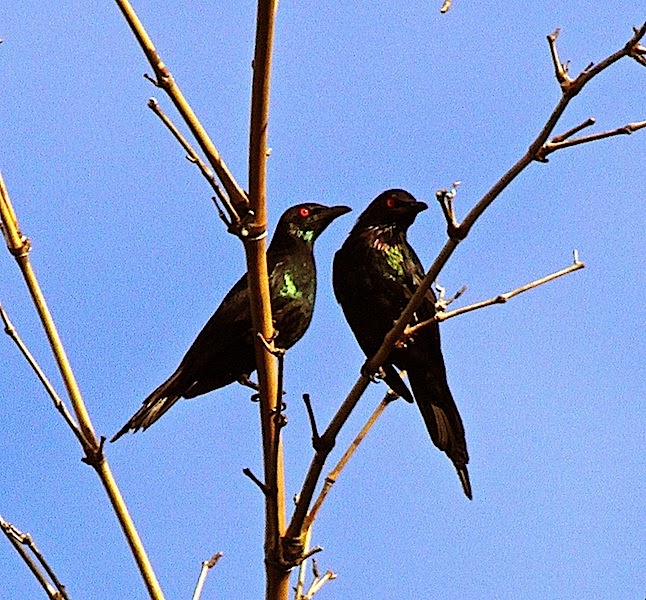 Large flocks of Shining starlings venture from their nest tree every day to forage in the rainforest. The juveniles are all confident flyers now, however a few adult birds always accompany the juveniles and seem to be instructing and watching over them. The viviparous purple fruits of the river mangrove Aegiceras comiculatum are ripe and ready to fall. The white flowers of this mangrove are scented and an important source of nectar for native and exotic honey bees. These mangrove fruits were eaten by Aboriginal people after baking, boiling in several changes of water then baking again.

Characteristic of the river mangrove is the large deposits of salt crystals on the leaves. 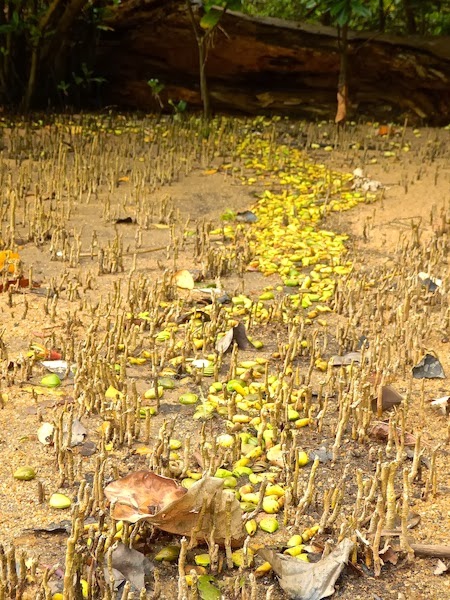 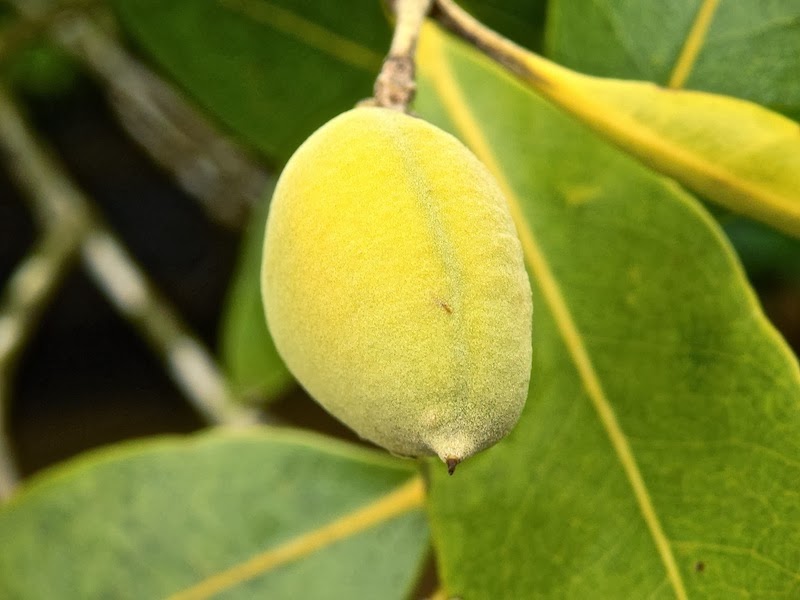 The fruits of the grey mangrove Avicennia marina are falling into the river and at high tide they are washed up on the tide-line and are easy to collect. When the ripe fruit falls they contain a single seed which opens to reveal two green fleshy, folded cotyledons or seed-leaves. These fruits were an important Aboriginal food. If you collect the seed  remove the bitter petiole, boil the seed for about half an hour in several changes of salt water. The boiled seed is a little like unripe avocado. 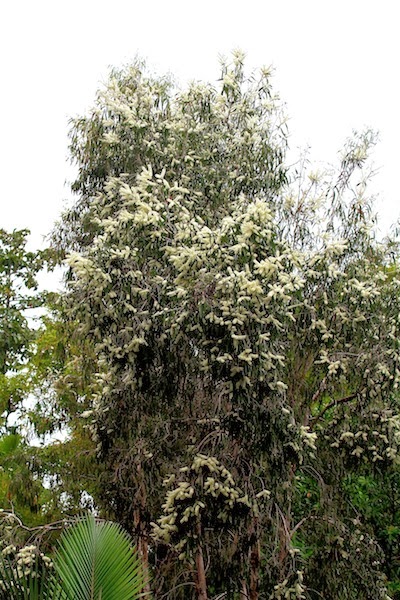 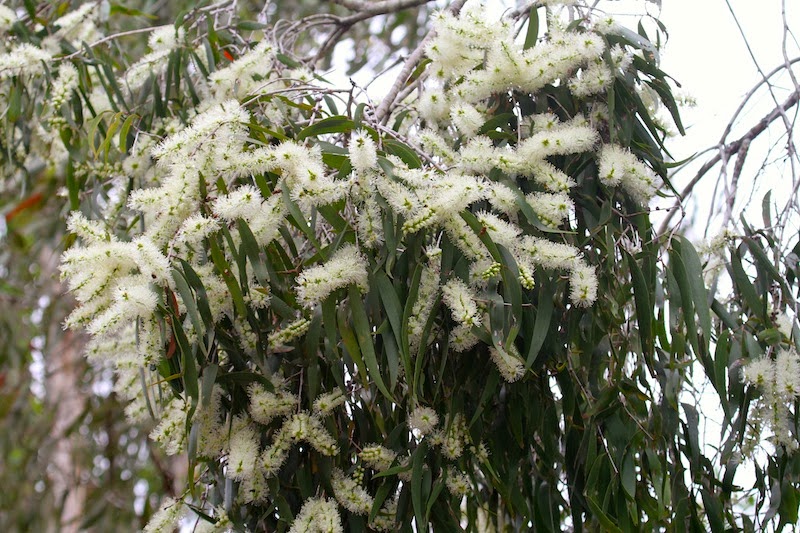 The paperbark swamps of Coquette Point are in bloom. The Melaleuca leucadendra trees of the swamps are dripping with nectar and the air at Coquette Point is heavy with the burnt caramel perfume of the flowers. At sunset the spectacled flying foxes are arriving in their hundreds and all night their squabbles can be heard as they jostle for possession of the flowers. In fact I can hear them now fighting and squawking. Mosquitoes and drizzling rain have kept me and the camera indoors, so sorry no photos of the flying foxes.
Aboriginal people made a sweet drink from the paperbark flower's nectar.  Collect a billycan full of flowers and cover them with warm water. Allow to steep for half an hour, shaking occasionally. Pour off the sweet water and drink. 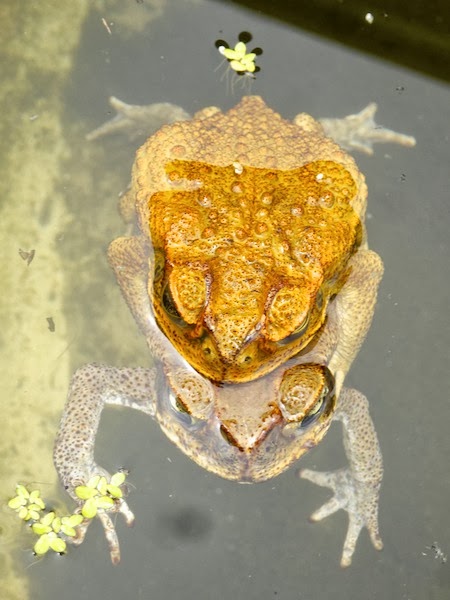 In every pond toads are mating and laying eggs. I have not seen so many toads around for years.  The extended wet weather has created the perfect breeding conditions for these pesky creatures.

Our Ruth Lipscombe, who surveys all from her home at the top of the Moresby Range which overlooks the Johnstone River estuary told me.  "One of the delights of living at Coquette Point is being able to watch the constantly changing patterns on the water as the rain squalls sweep across the Coral Sea.
The initial sound of raindrops on water is quickly followed by the thunderous noise so many of us love-Bill Scott's tropical Rain on the roof."

Thank you for that beautiful description of the Monsoon Season Ruth and happy International Women's Day to you and all the wonderful women of our Community.

Cheers and keep safe at home and on the road with the extreme weather expected this week in FNQ.