This morning we woke to a blue-sky-day with a touch of winter in the air, the clouds and rain of the past week had evaporated, it has been a perfect day on the Cassowary Coast.

As soon as the wind dropped this week the fishing boats all rushed to sea busy to gain a catch of fish for the Easter Market. Only the memory of cyclonic winds remained in the clouds and a long low swell in the sea gently set the boats rolling as they left the river mouth. 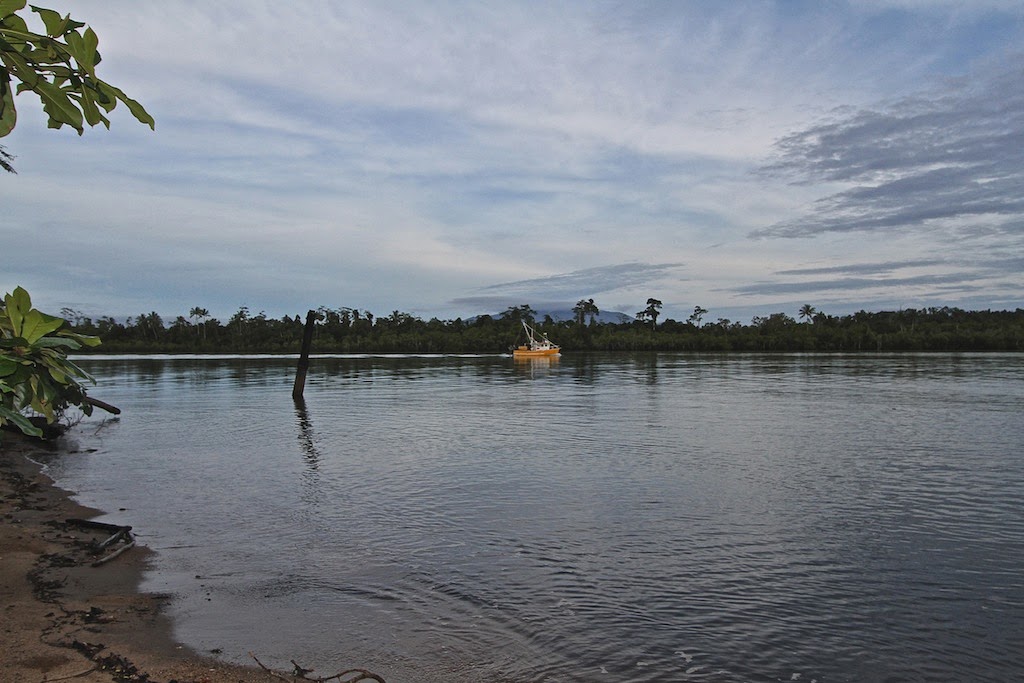 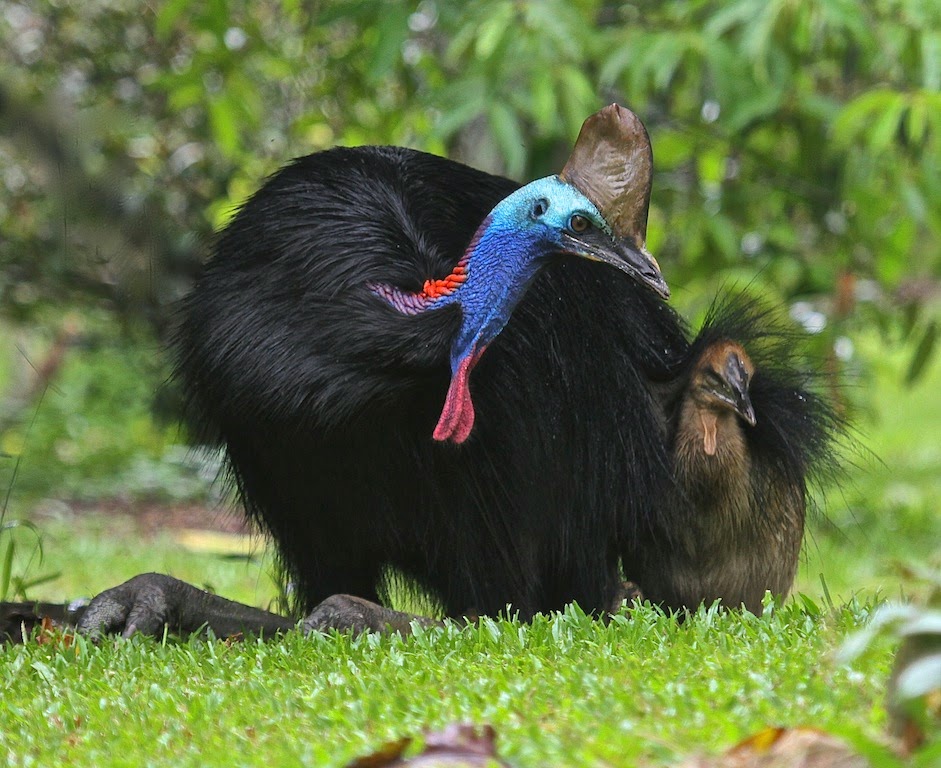 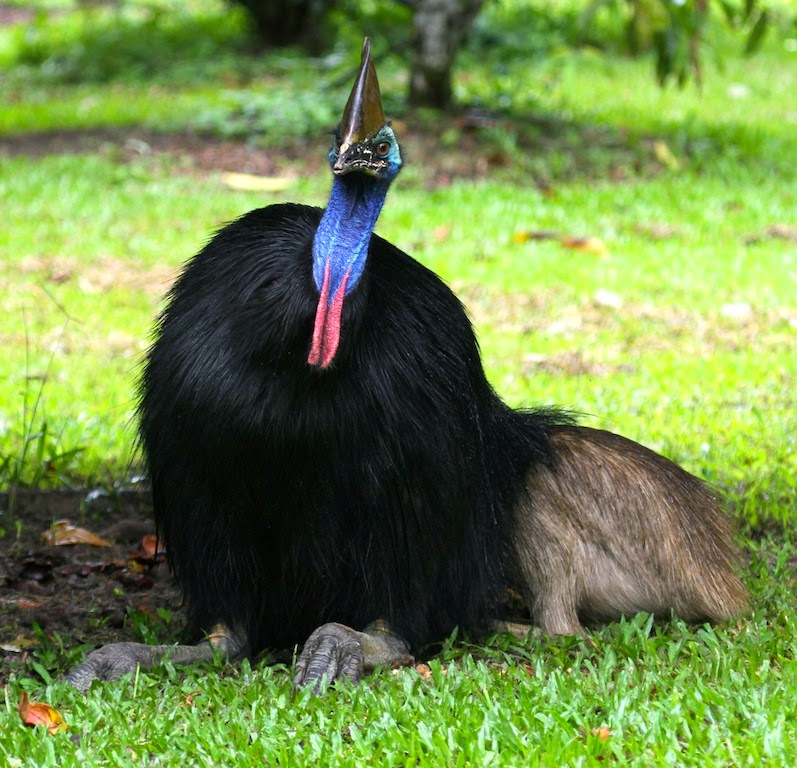 Cassowary chick little Ky had enough of the rain and when dad Snout sat down she tunnelled into his feathers to find shelter from the rain and protection from the incessant mosquitoes. 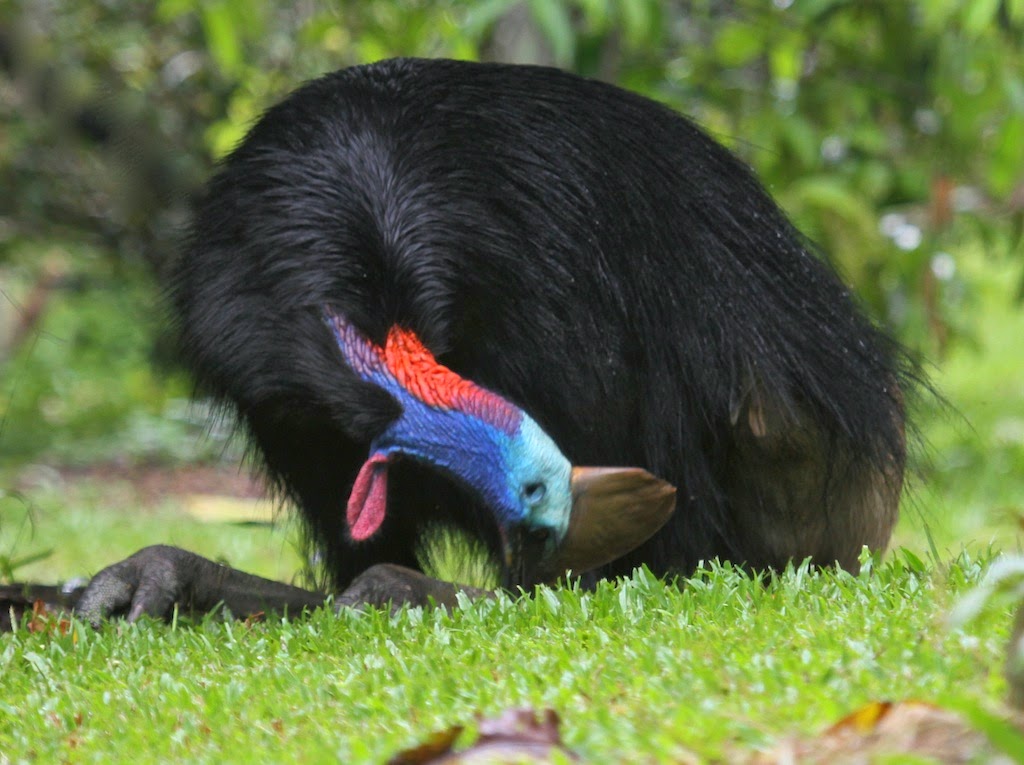 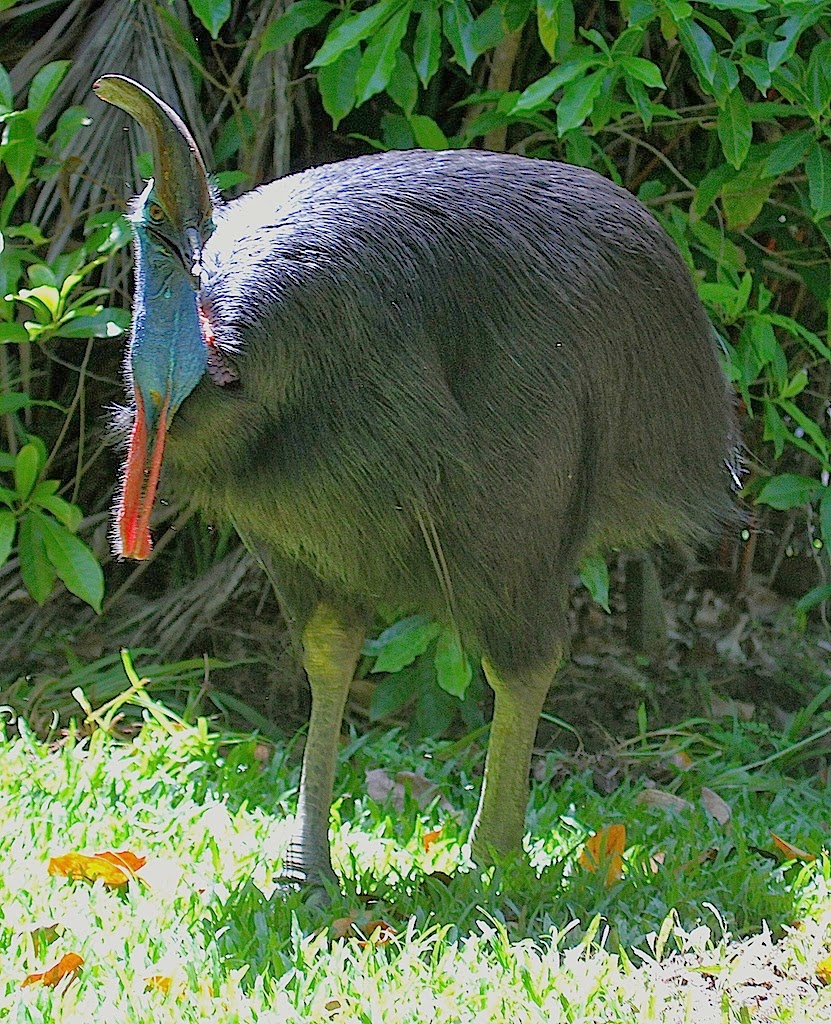 I was sitting down this morning having a cup of tea with a friend when we heard cassowaries drumming. We ran to the sound and saw that matriarch cassowary Jessie had turned up and Snout was not at all happy.

Jessie showed no aggression towards Snout or Ky and in fact lowered her head submissively.

When little Ky walked towards Jessie, no doubt anxious to meet his mother, Snout uttered a low growl. The sound was something between a dog's snarl and a loud expulsion of air like a 'fart'. Three times Ky approached Jessie and each time Snout uttered this same sound. A sound I have never heard from a cassowary before. Each time it resulted in little Ky running away from Jessie. Jessie made no audible sound nor did she show any aggression to Snout or Ky. 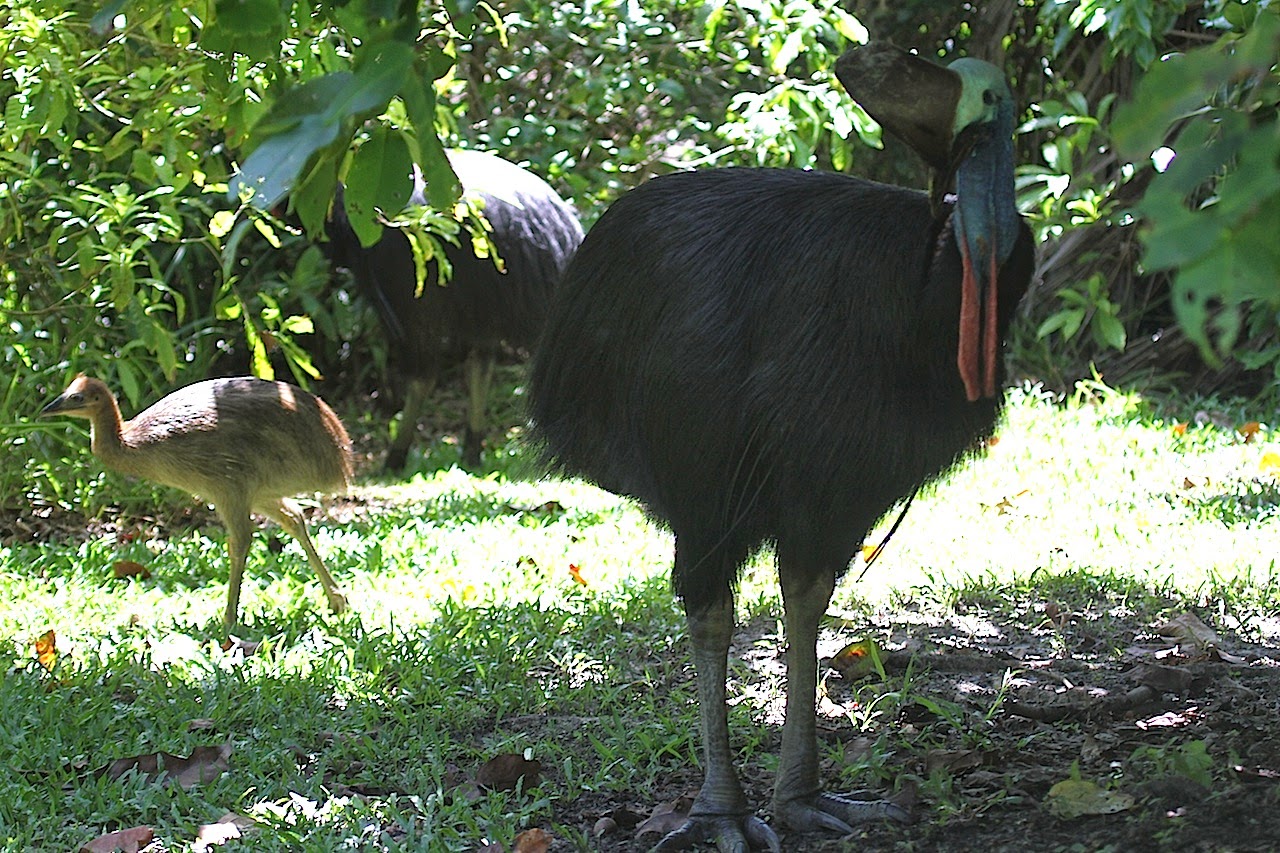 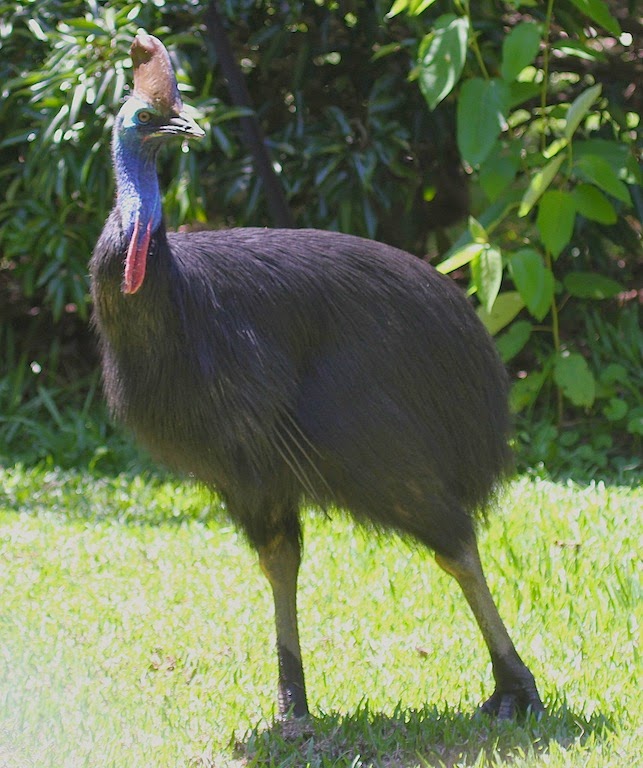 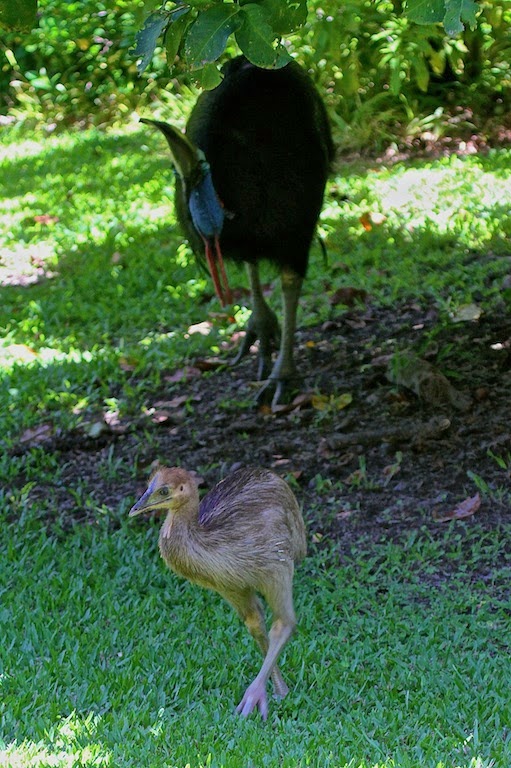 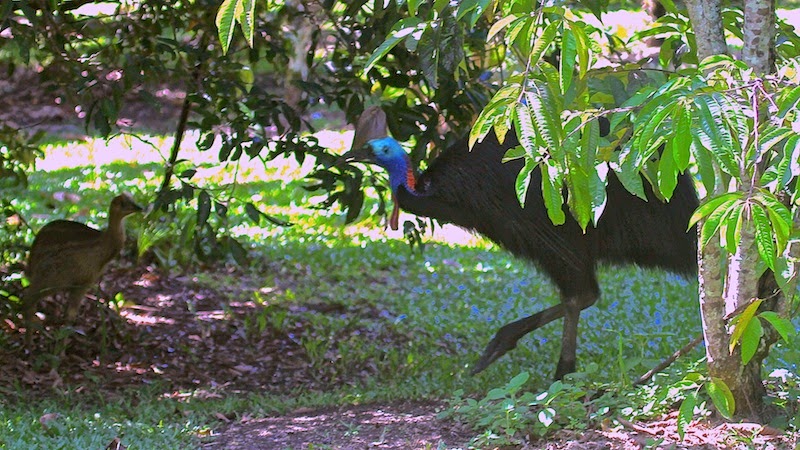 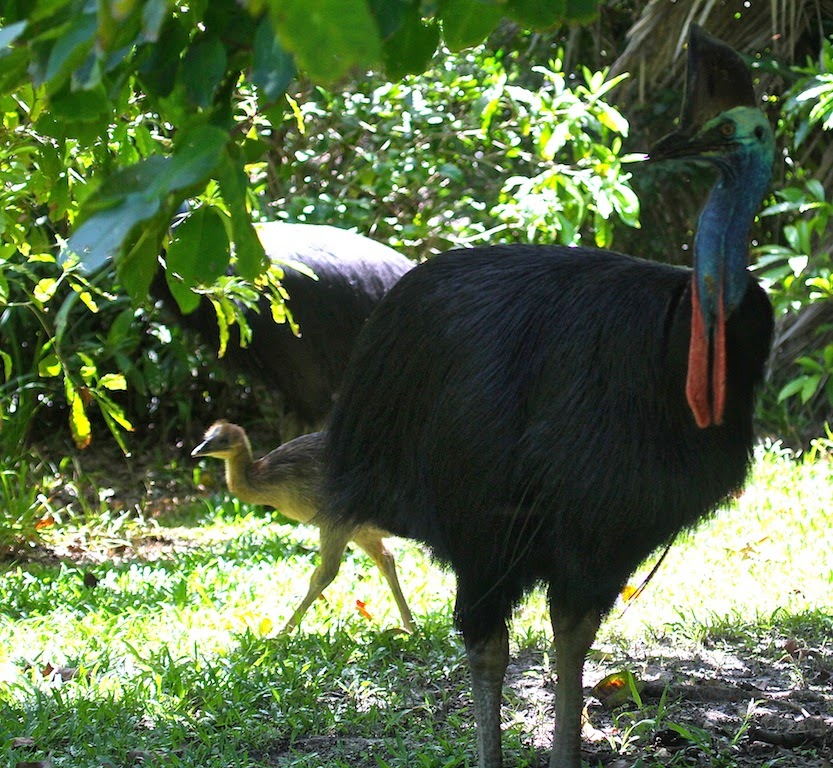 Eventually Jessie left and Snout and Ky, very much on their guard and nervous, walked down to the Cherry Guava tree in the nursery for a snack. 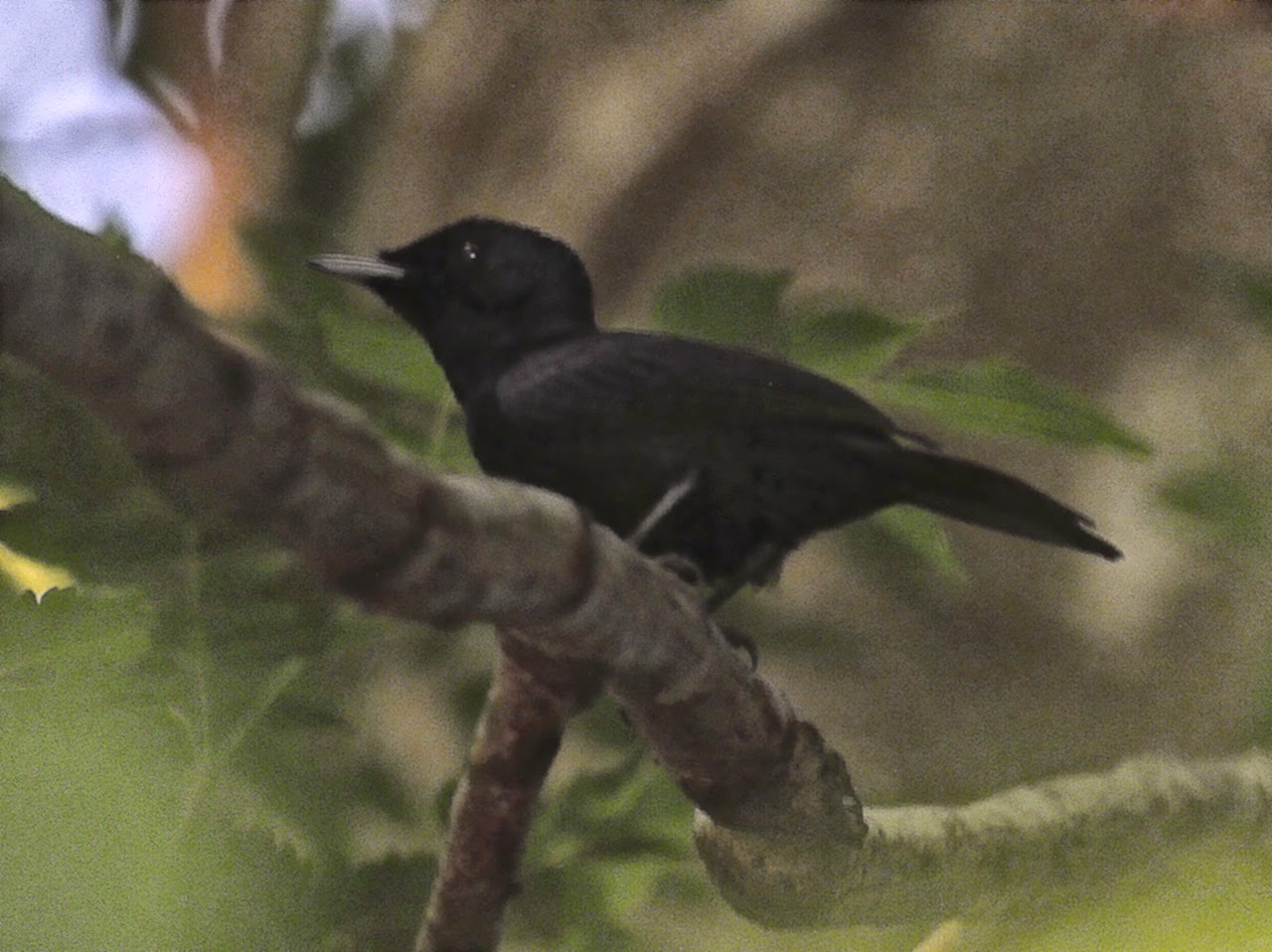 I saw a helmeted friar bird acting strangely in the melaleucas. Suddenly he jumped, caught a cicada and swallowed it whole.

Although helmeted friar birds mostly feed on the rich nectar of flowers or enjoy a feast of ripe fruit, these ungainly birds are also capable insect hunters. 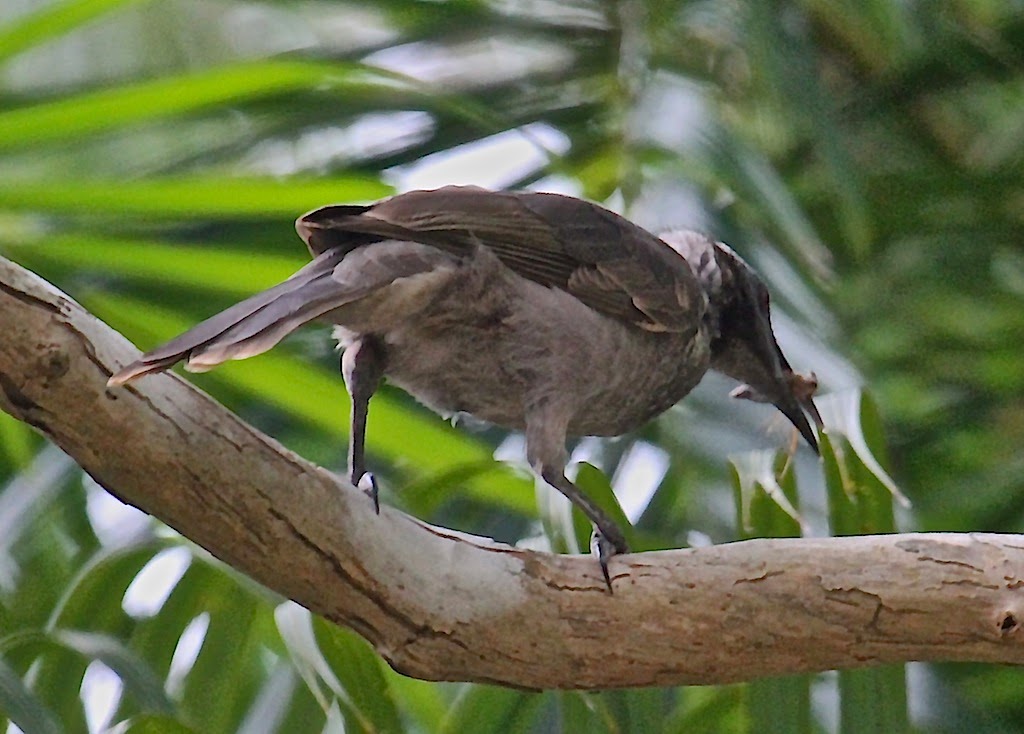 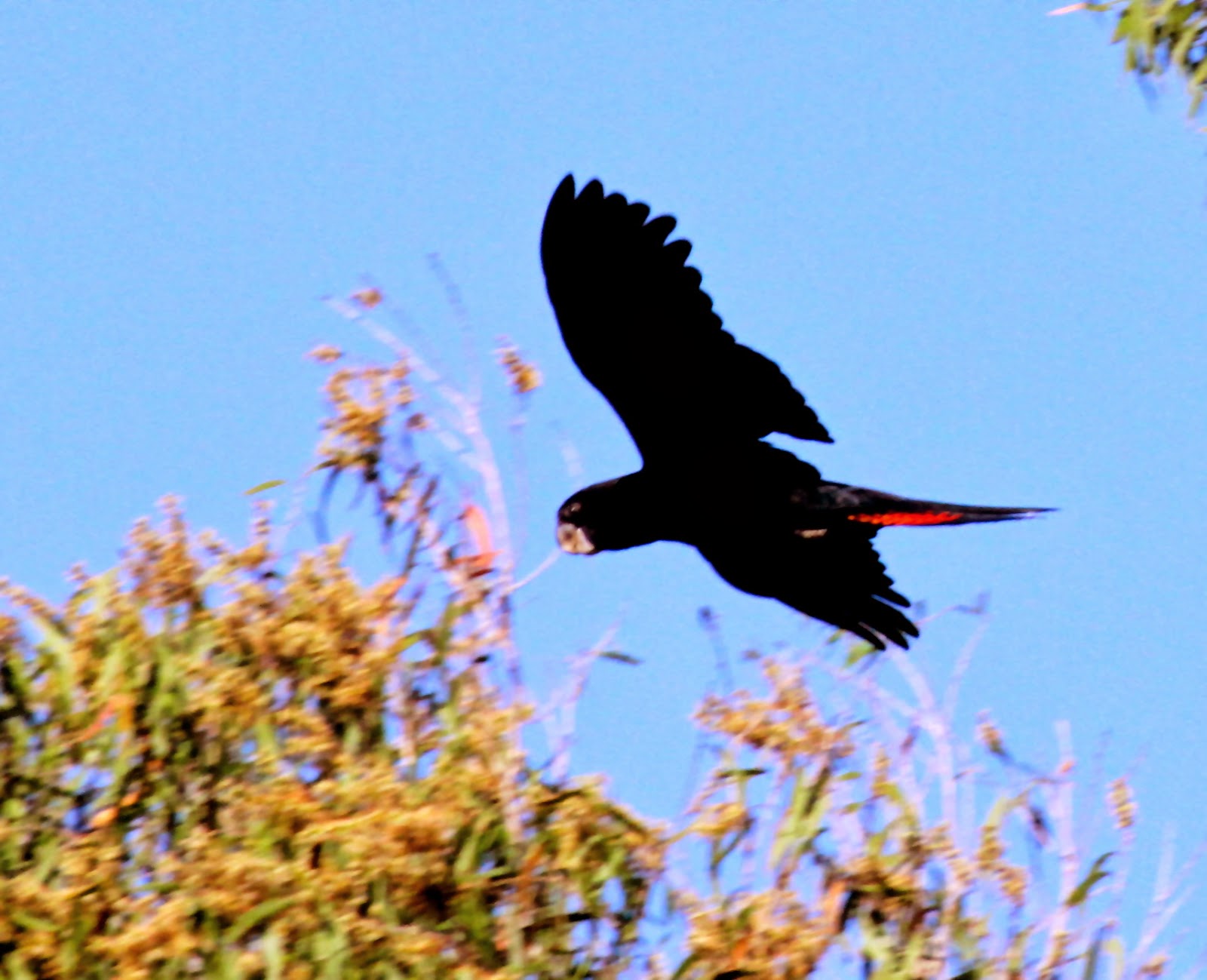 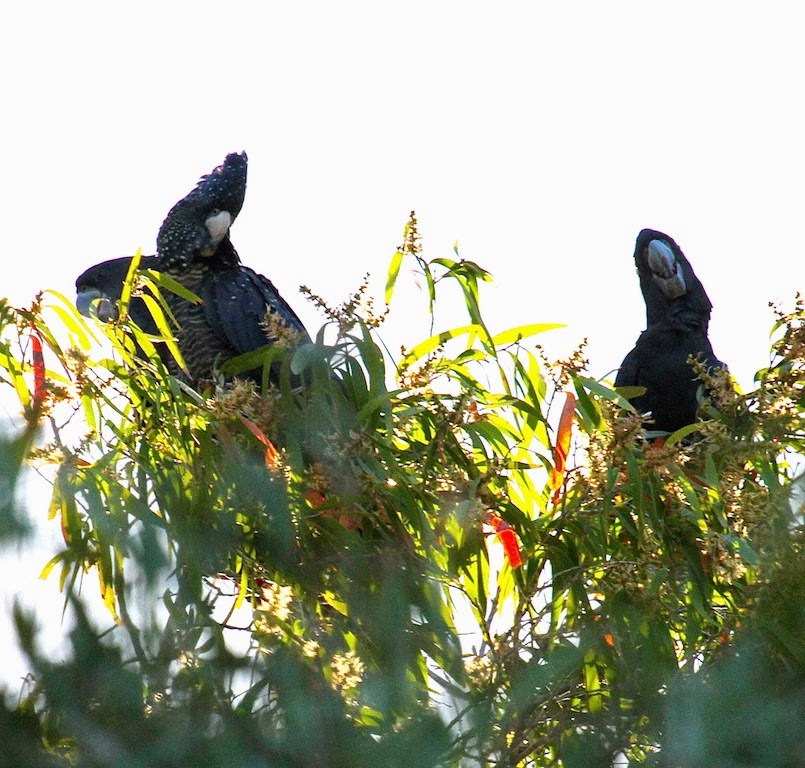 The black cockatoos flew into the melaleucas tree-tops today. The flowers have turned brown and the remaining nectar has fermented in the hot sun. The cockatoos jostled in the melaleuca's canopy to take possession of the best flowers and drink their toddy.

When they finished they feasted on the ripe fruits of the beach almond, Terminalia catappa.  Mosquitoes covered me as I stood in the mangroves photographing the birds and I noticed the cockatoos also scratching the insects away from their face. 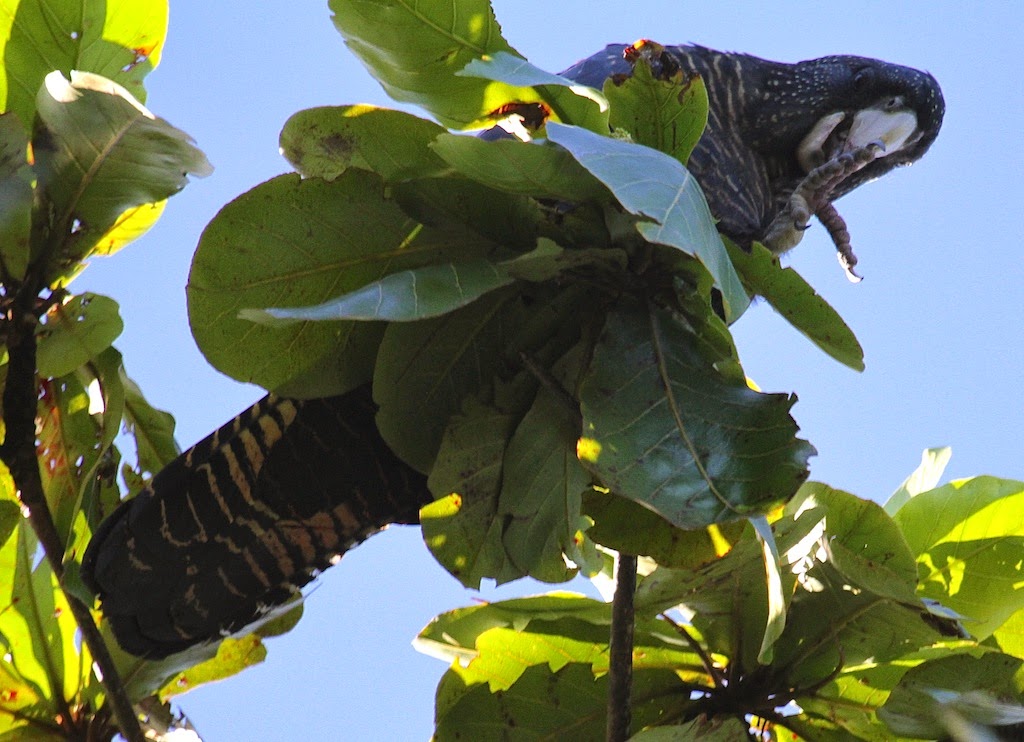 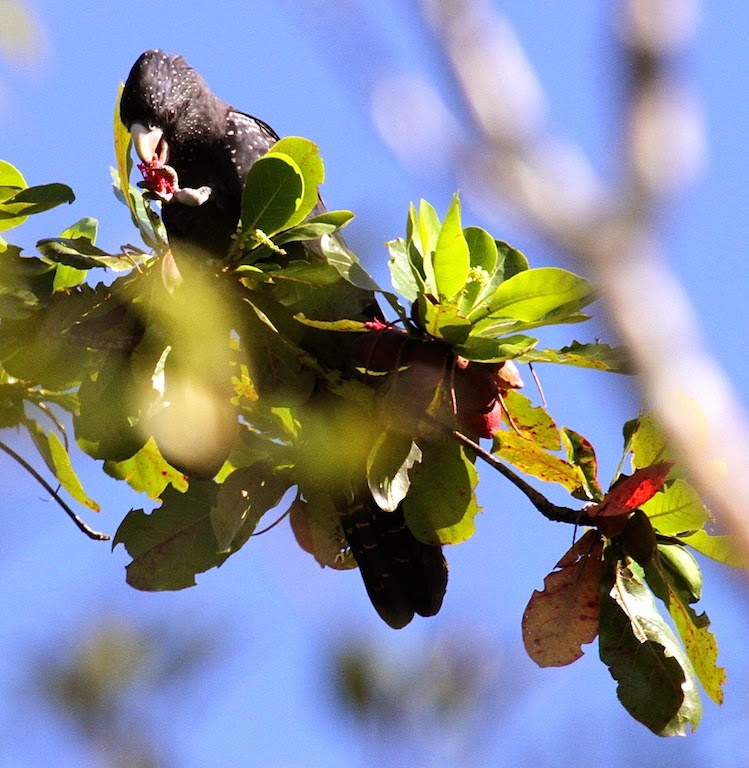 Soon they finished eating and drinking and swept from the tree tops and headed to town.

Underneath the trees the sand dune was littered with fallen beach almond fruits which the cockatoos had knocked from the branches. I had no doubt the cassowaries would arrive soon to feast on the fallen fruits.

News from around the traps:
Hazel Holland lives across the Johnstone River from me at Flying Fish Point and the cockatoos have been dropping into her front yard to feast on the fruits of her beach almond tree. They have been eating the fruit from the canopy as well as the fallen fruit under the tree. 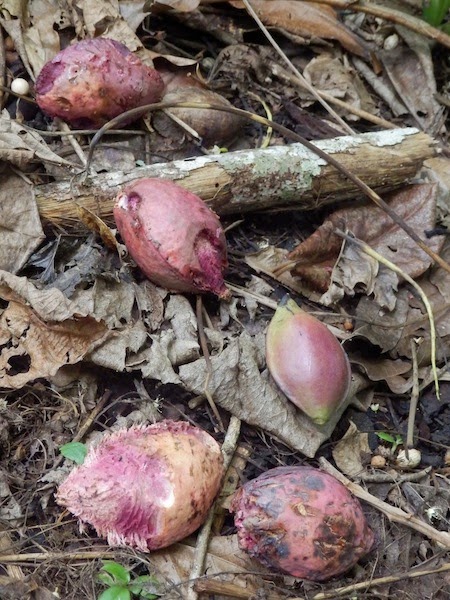 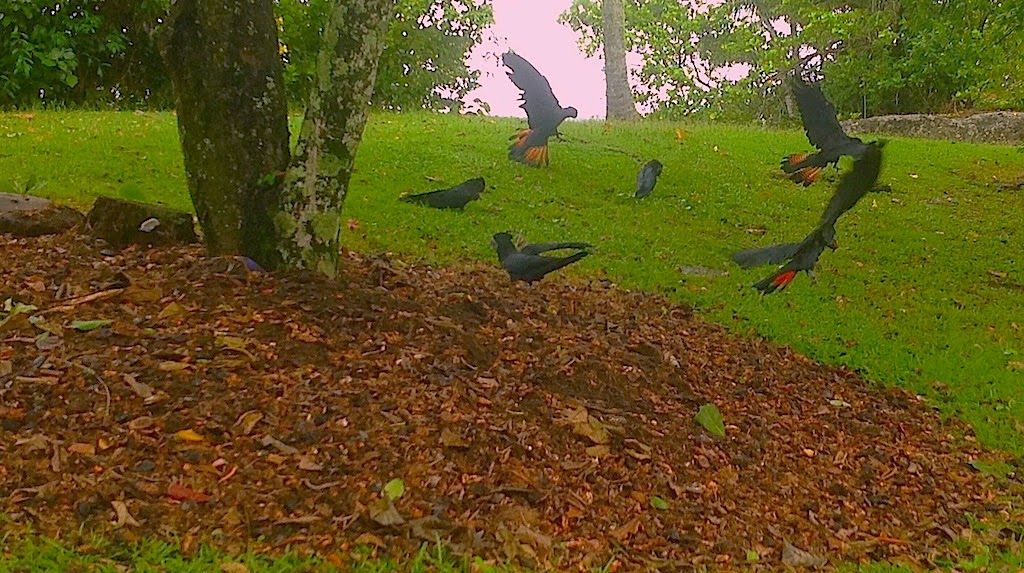 The fruits of the beach almond are eaten by  fawn-footed melomys, white-tailed rats, flying foxes as well as cockatoos and cassowaries .


Hazel had a special visitor to her garden this week and sent me this photo to share with you. 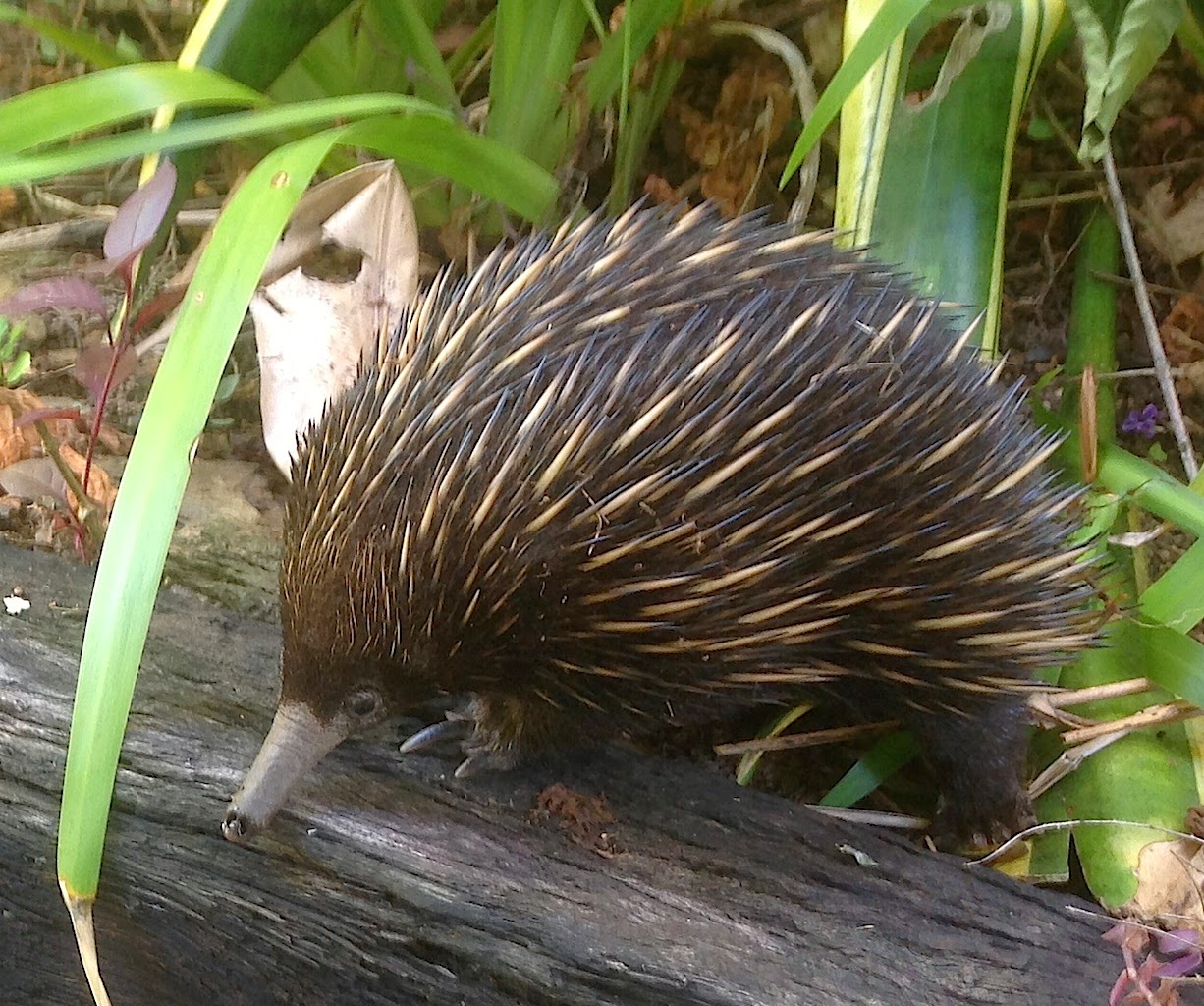 Hazel told me she heard a noise outside her kitchen window and when she looked she found an echidna in her garden bed; what a wonderful photo Hazel took of this special creature.

Echidnas are out and about at the moment and many are killed by speeding cars when they try to  cross roads. 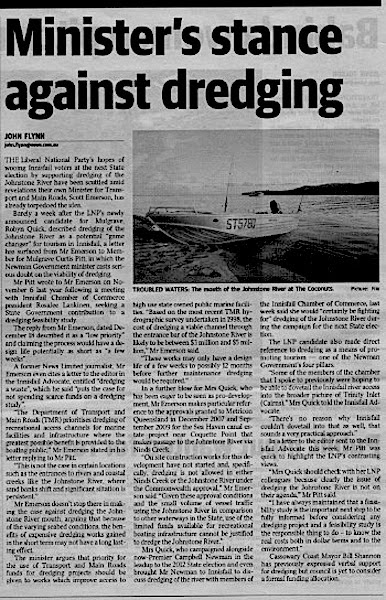 It is reported in today's Innisfail Advocate that the State Minister for Transport and Main Roads, Scott Emerson states he does not support funding the dredging operations on the Johnstone River bar.

Mr Emerson states " These works may only have a design life of a few weeks to possibly 12 months before further maintenance dredging would be required."

When you look at the history of dredging of the Johnstone Bar that is exactly what has occurred, not once but dozen of times in the past until the old Johnstone Shire Council, in every previous occurrence, gave up, as it was far too costly to continue dredging a channel through a shifting river-mouth bar.

The previous Labor Government supported dredging of the Johnstone River and perhaps it is an indication of why they got our State into an 80 billion dollar debt hole.

As Mr Emerson has stated, "Funds need to be spent where the greatest possible benefit is provided to the boating public."

Mr Emerson made particular reference to the approvals granted to Metricon Queensland for the Sea Haven canal estate project near Coquette Point that makes passage to the Johnstone River via Ninds Creek. "On site construction works for this development have not started and, specifically, dredging is not allowed in either Ninds Creek or the Johnstone River under the Commonwealth approval," Mr Emerson said. "Given these approval conditions and the small volume of vessel traffic using the Johnstone River in comparison to other waterways in the State, use of the limited funds available for recreational boating infrastructure cannot be justified to dredge the Johnstone River."

I may not agree with all the policies of the Queensland Liberal National Party Government, however, as an economic rationalists myself, I know that strigent cost benefits analysis must be carried out on all Government projects.

Enough of politics:  If you are able, please join me at Coquette Point on Thursday 27th March at 4pm for the launch of the third edition of 'Tropical Food Gardening'. www.tropicalfoodgardening.com 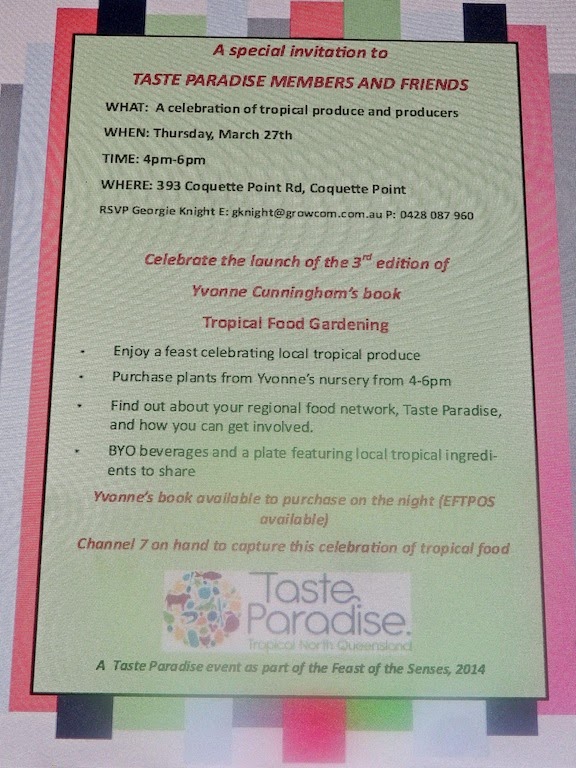