Greetings from Coquette Point on the first day of Autumn,

The New Moon tonight is hidden behind a thick bank of clouds as light rain has continued to fall all day. A low 490 miles northeast of Willis Islands reminds us that the cyclone season is not over; however, it seems unlikely that this system will develop into anything significant nor move onto the Queensland coast. The low when it does develop into a cyclone is more likely to move south, parallel with the Queensland Coast. With a large high in the Bight we may see a prolonged period of strong winds and heavy rainfall and once again beach erosion.

The rainforest is flushing new growth with a mosaic of coloured leaves and flowers covering its canopy. The Wet Tropics Rainforests are at their best in autumn. 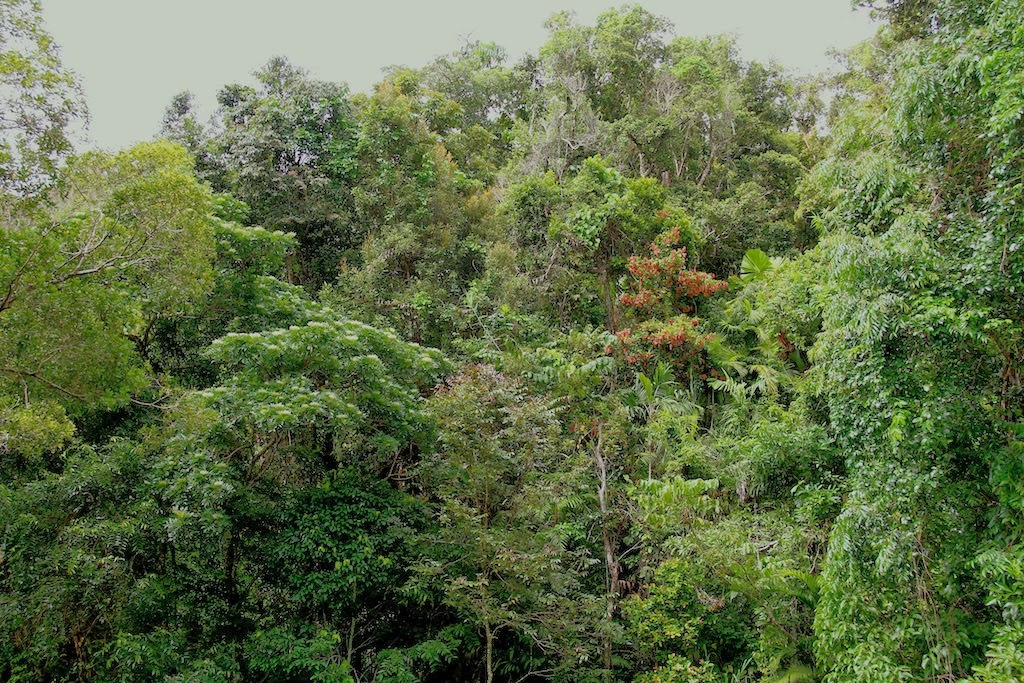 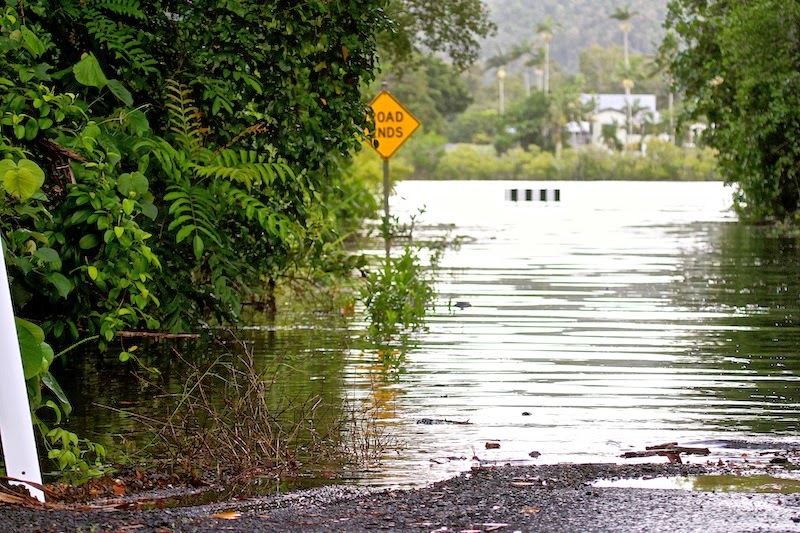 King tides this week have again isolated Coquette Point at Ninds Creek. Maybe its selfish but it is a lovely feeling when you know your are cut off from the town and no one will come to bother you; even if it is only for an hour or two.

If sea level rises follow predictions Coquette Point  and the Moresby Range may become an island!!!! 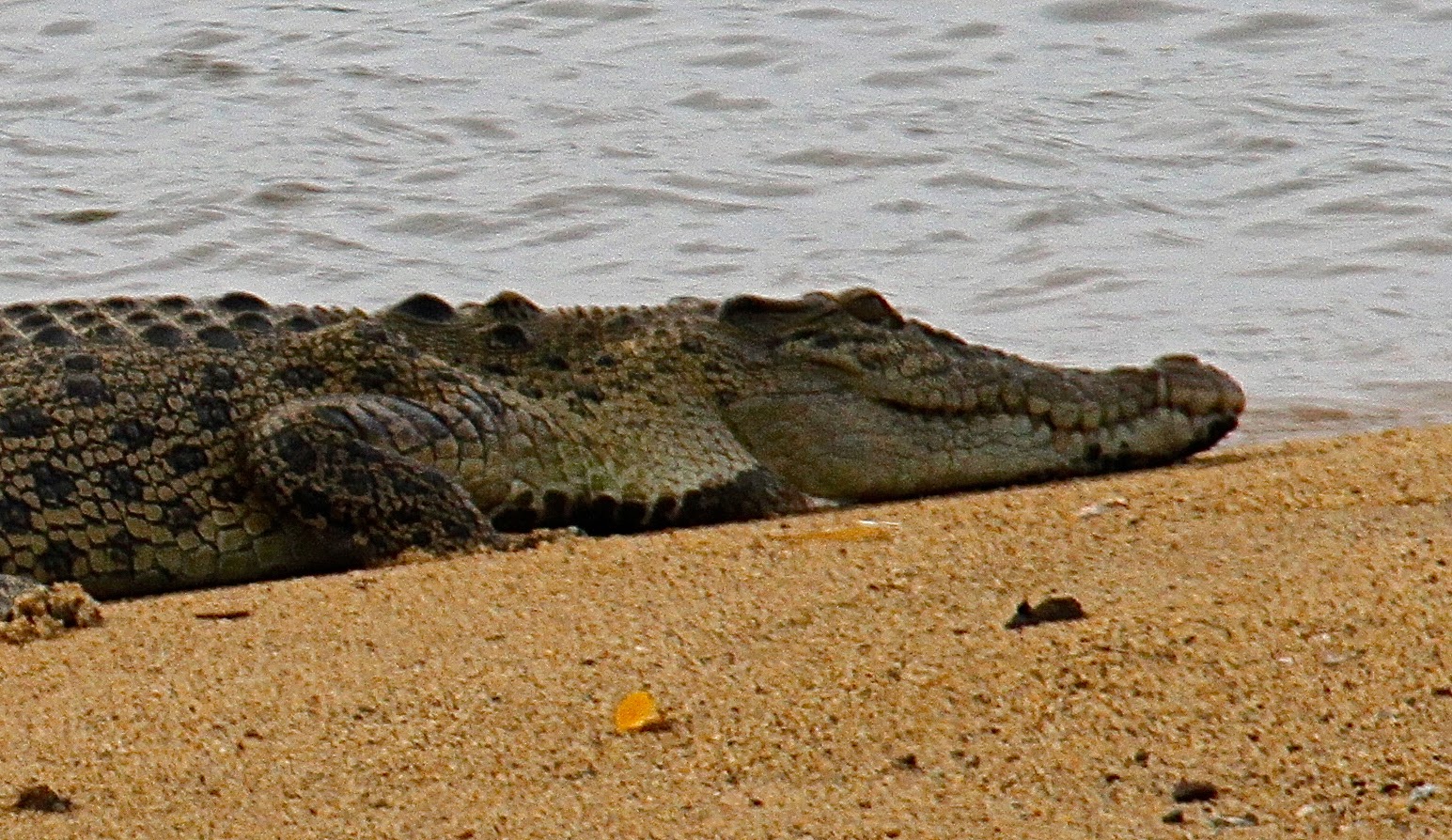 I have very sad news Charlene is no longer wild and free in the Johnstone River. This week she was caught in a crocodile trap by Queensland National Parks and Wildlife Service and has been handed over to a crocodile farm where she will be killed for her skin. It is a sad time when we see National Park Rangers in Western Australia killing sharks and in Queensland killing crocodiles.

Charlene will be killed because the people of Queensland do not understand the vital role that crocodiles play in the river's ecology. Charlene was just under two metres and timid, not aggressive, so her removal is in contravention to the guidelines of the Queensland Crocodile Management Policy. I have spoken to a number of river users and no one reported any aggressive behaviour from Charlene. These are Charlene's last pictures and she was under two metres in length, I know this as I measured her slide when she moved off the beach on the occasion I took the photo above.  What a sorry lot of humans we are that we cannot adjust our lives to live alongside these ancient creatures. 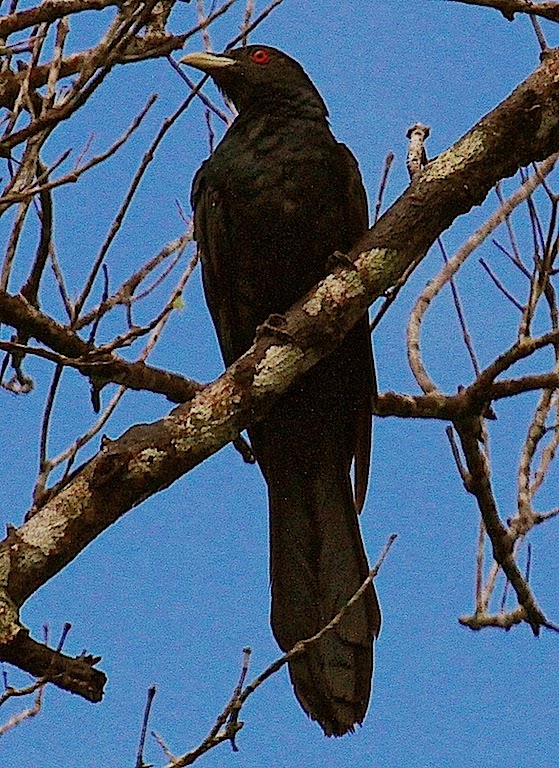 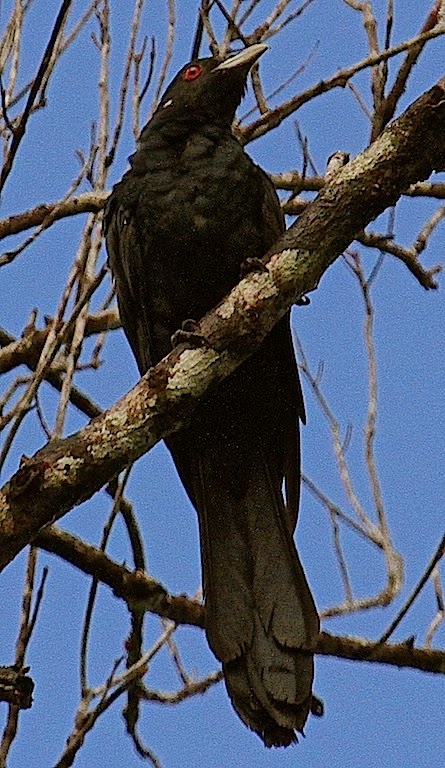 The male Indian Koel has been calling loudly all week and getting into some trouble with the Pied Imperial Pigeons. Almost every morning I hear his loud alarm call and watch as the Pigeons chase him away.

The pigeons instinctively know that he is a cuckoo and the female Koel could lay her eggs in the pigeon's nests.

The Pied Imperial Pigeons appear to be pair bonding, it is too late in the season to lay more eggs and start another brood so perhaps they are forming units for the migration journey that is imminent. 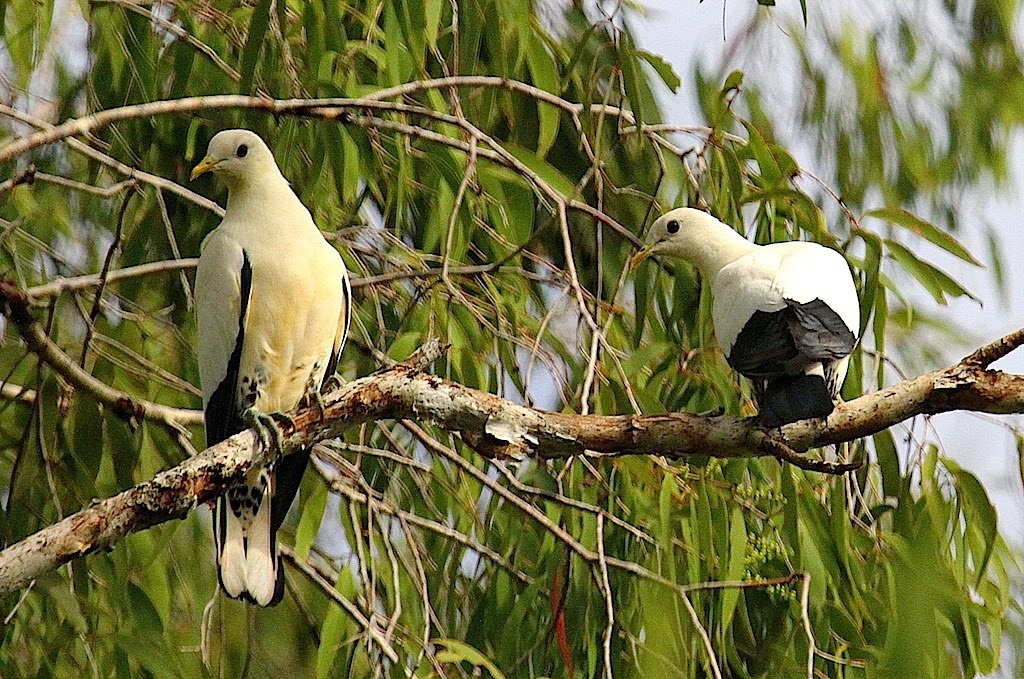 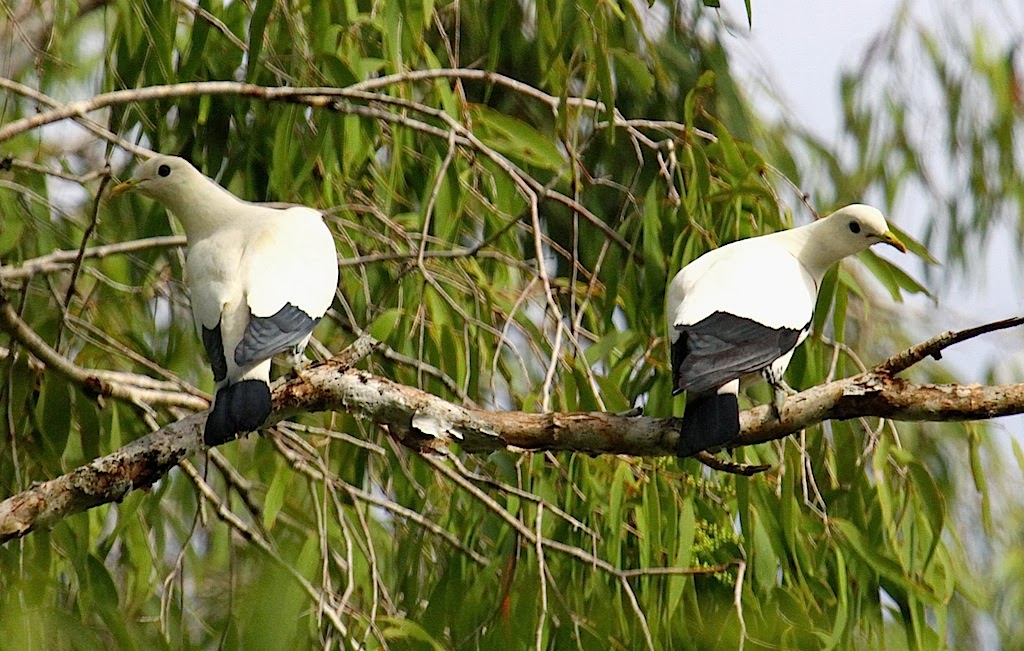 I wonder what he is saying to her?
He does have that look in his eyes and she seems so bashful! 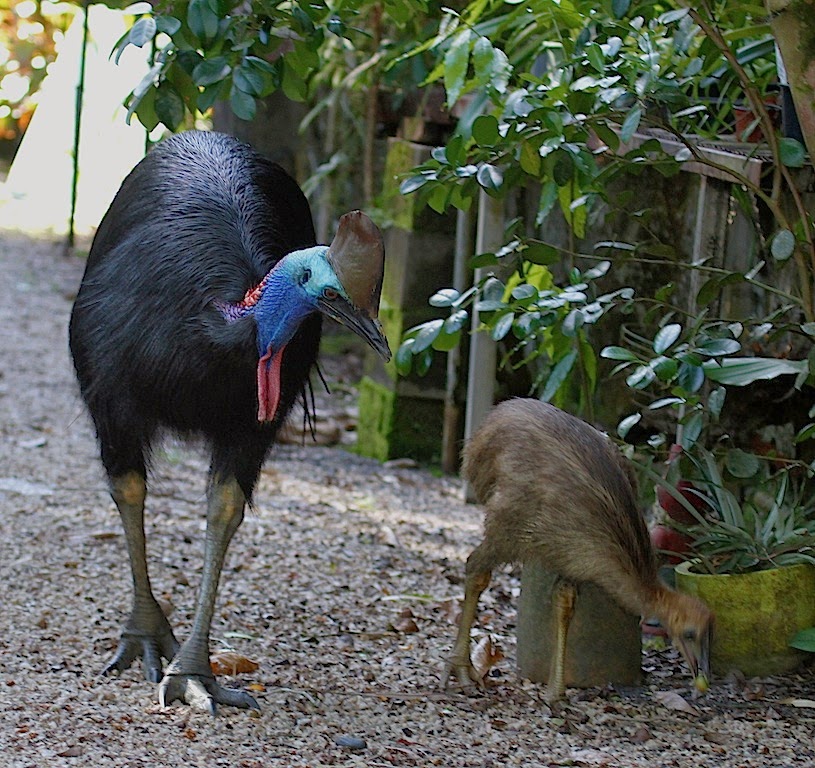 A strawberry guava is in fruit in the nursery and Snout has found it. I watched as he reached up and knocked the fruit off the tree and checked to see that little Ky was eating.

Little Ky watches everything Snout does and no doubt is learning by watching.

Cassowary chicks are with their fathers for almost two years and in that time they must imprint all the locations of the foods within their territory, the seasons they are available and the methods used to harvest. 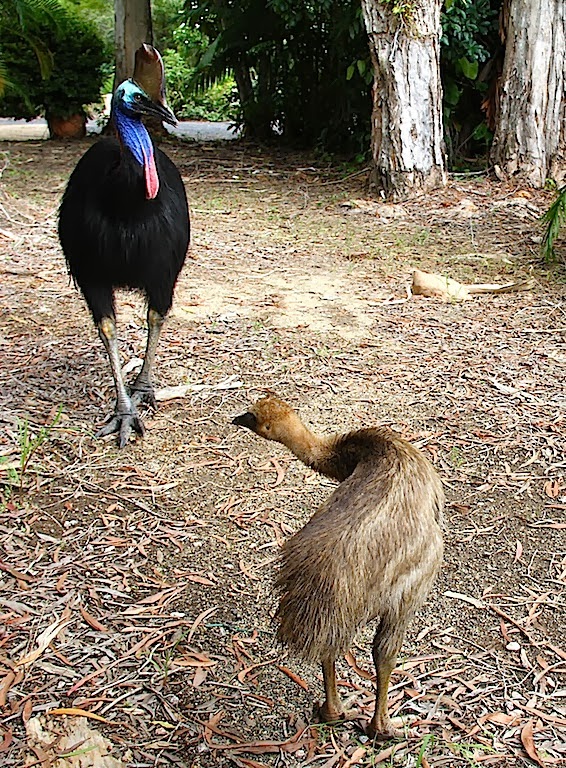 Little Ky has started to become playful and will jump and twist and throw himself at a tree for no apparent reason. Snout looks on with some amusement.

I was surprised to find a purple scat from Ky and on investigation I found the Damson Plum had a small flush of fruit. These are such important food trees not only for the Cassowary but also the Pied Imperial Pigeons. 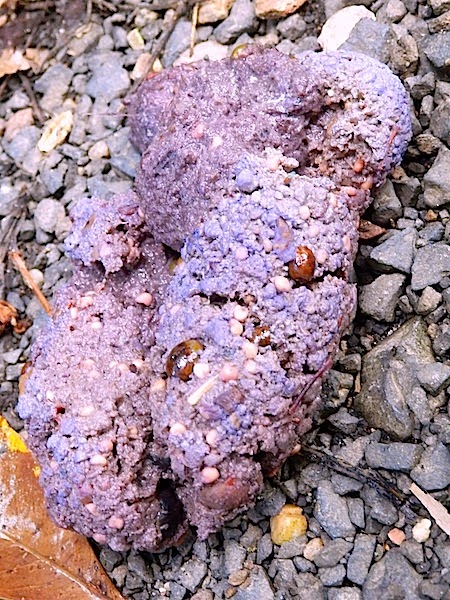 If you haven't tried the little Damson Plum do so. Although they do not contain a lot of flesh they are delicious and the fruit can be made into a refreshing drink or a tart jam which has complex flavours, and the fruit is good to add to spice up chutney. 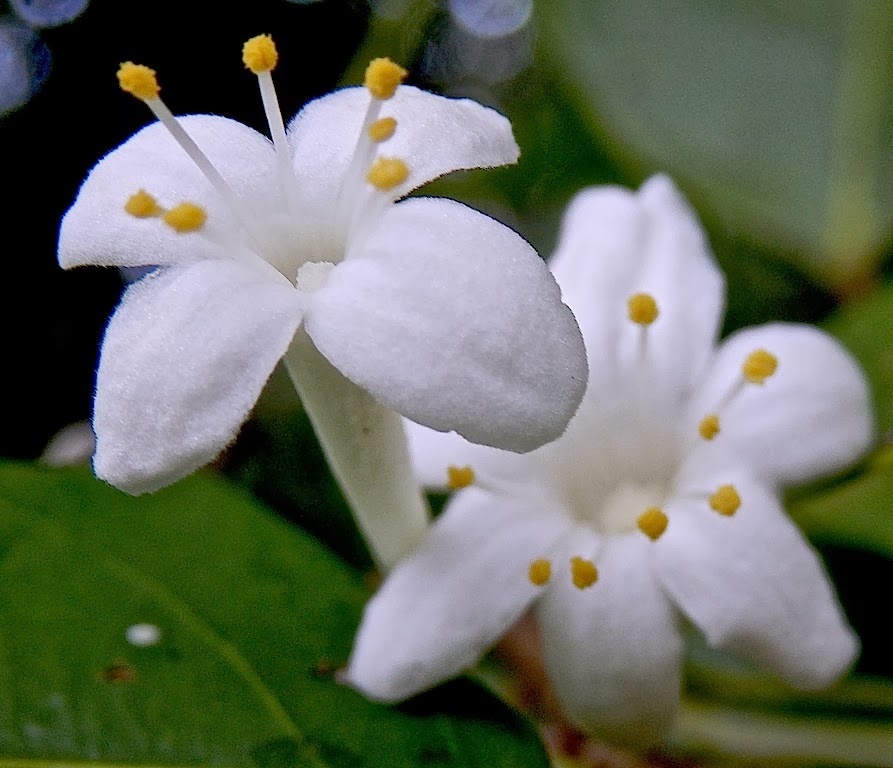 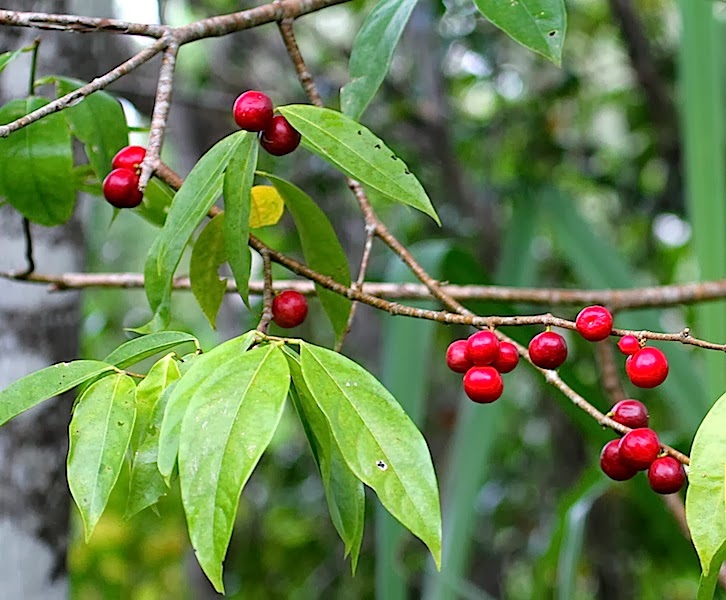 Also flowering and fruiting at the moment is the deadly Phaleria clerodendron. Every part of this tree is poisonous but the cassowaries eat the fruit with impunity. The beautiful white flowers are perfumed and thus the common name for this tree, Scented Daphne. It is also called the even more inappropriate Rosy Apple.

The cassowaries are on the move and extending their personal range they are eating a lot of Alexander Palm fruits at the moment and I counted six scats on the Coquette Point Road on Thursday. 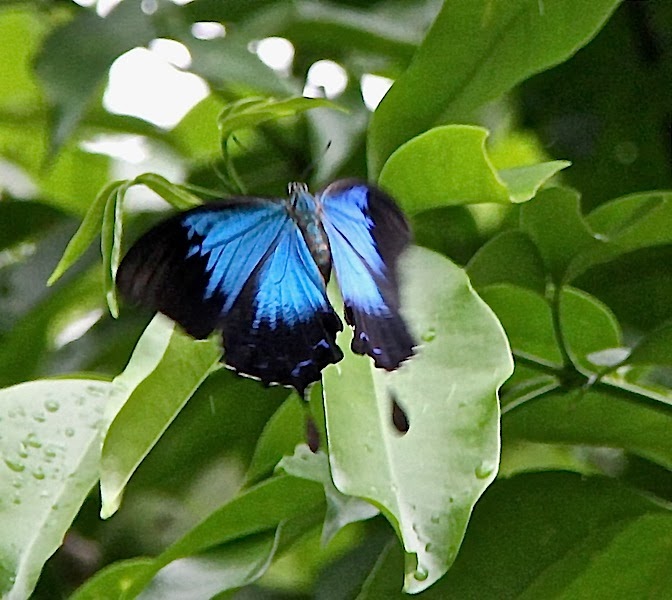 The autumn skies above the rainforest are full of butterflies particularly the bright blue Ulysses. The female is busy finding her host tree Melicope elleryana, on which to lay her eggs. 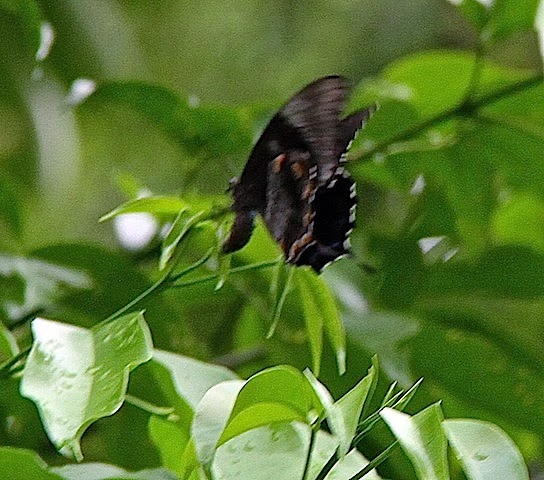 This bright green male Cairns Birdwing has taken up guarding duties above his host vine, Aristolochia tagala, where females will come to lay eggs. He is constantly on the move chasing any other butterfly species which dares to enter his territorial space. 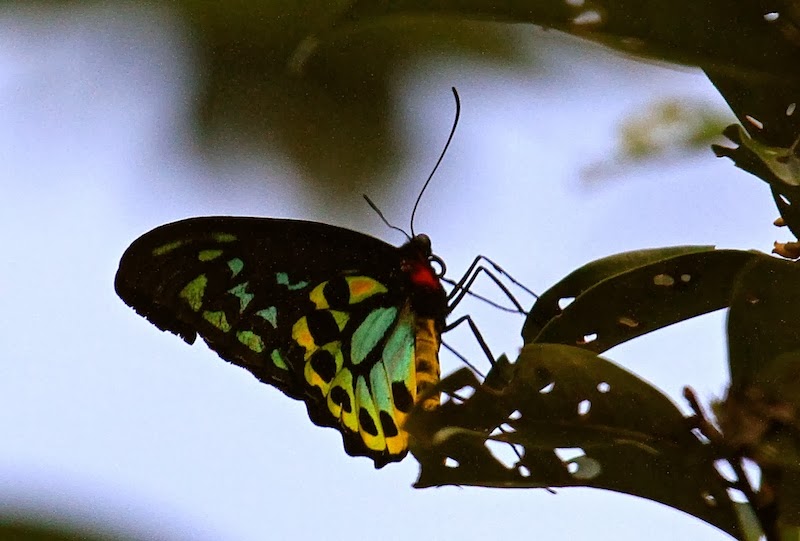 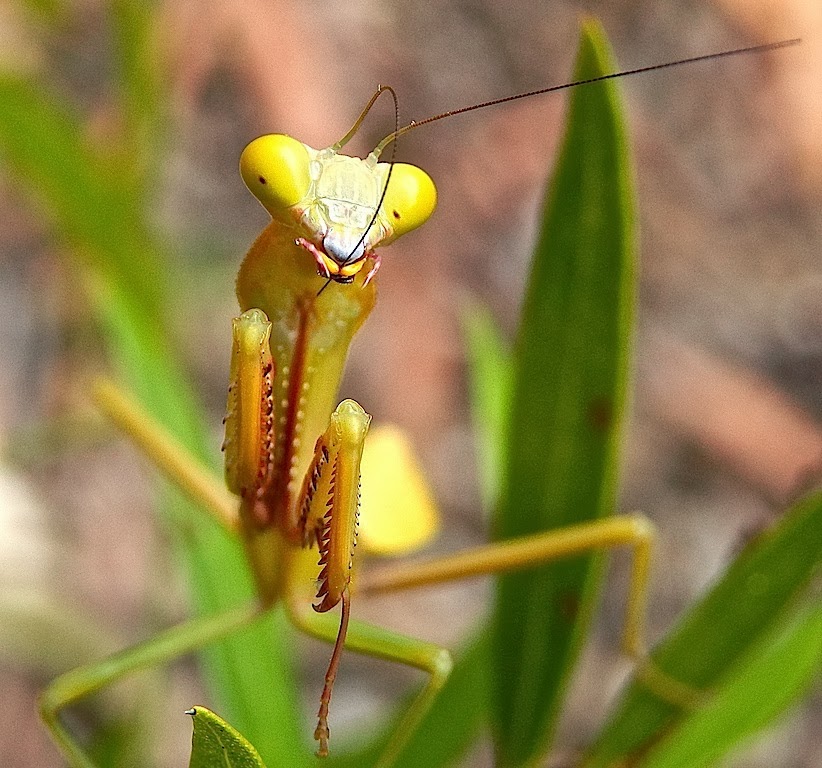 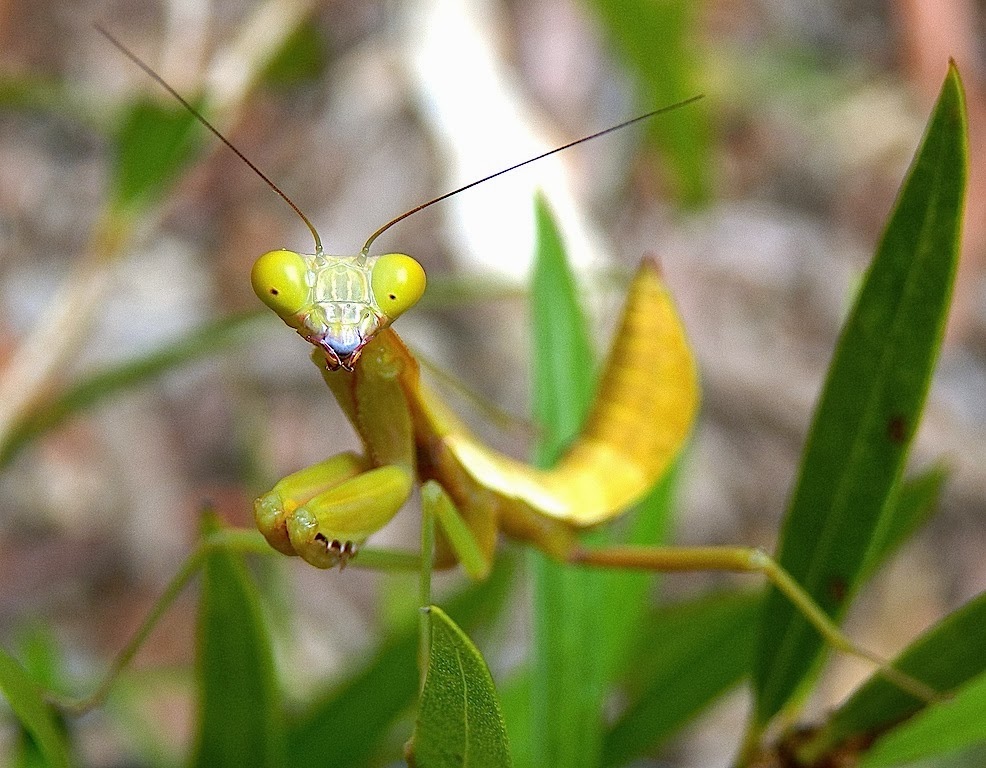 The yellow Giant Mantid is very active in the nursery at the moment catching grasshoppers, flies and mosquitoes. This amazing colour variation in the mantid does little to help with camouflage particularly when she is hunting around green plants.


The female mantid has small wings used mostly for display. She remains resident in her hunting territory and when she is ready to mate she secretes a hormone which the smaller winged male can detect from a great distance.

Another amazing creature which lives in the World Heritage Wet Tropics Rainforest of north Queensland. 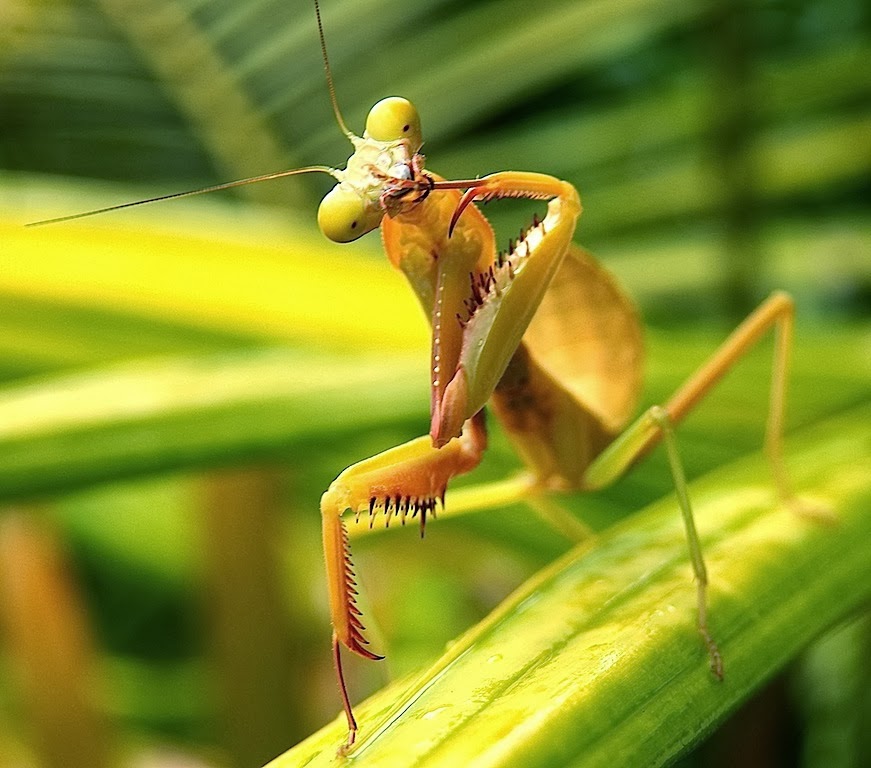 Last Sunday the Queensland Community Cabinet met in Tully and members of the Cassowary Coast Alliance took the opportunity to present some of their concerns to the Minister for National Parks, the Hon Steve Dickson MP. The issues we raised were about dogs running loose in National Parks, Cassowary deaths from motor vehicles and Cassowaries accidentally being caught in pig cages. Mr Dickson expressed concern about the issues and promised to look into the matters we raised. 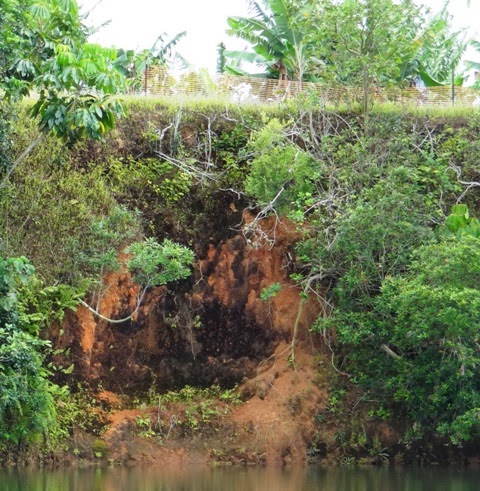 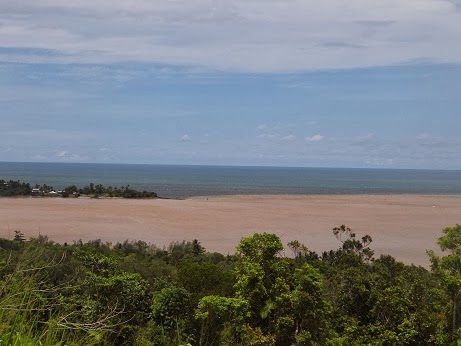 Although we had confirmation of a meeting with Minister Cripps we were disappointed we were unable to speak to him personally. However, we did present to his Department Head our concerns about the severe erosion of the North and South Johnstone River's high and low banks and the heavy silt load of eroded material that is carried from the Johnstone River to the World Heritage Great Barrier Reef after every rain event in the river's catchment. We hope Minister Cripps will take urgent action to remedy, in some way, the critical state of the Johnstone River's high and low banks.

If you have an opportunity to take a boat ride up the Johnstone River please take some photos and send them to Minister Cripps with your concerns about this erosion.

Because of the silt the sea-grass beds in the Johnstone River are now dead, dead beneath a layer of greasy muck. Coral along the headlands and around the inshore islands is gone. The fringing reefs are all but completely gone. The near reef shoals such as Gouge Banks, Arthurs Patches and Surprise Shoal have a distinct red stain to the surrounding sediment and the coral cover would be less than ten per cent. The mid shelf reefs are in poor shape.

Turtles, porpoise and dolphins no longer venture into the River. The eelgrass beds in the Johnstone River are gone and gone with them are the many species of fish and crustacean they supported. This has left a river unable to support even a fraction of the fisherman once reliant on her for existence and recreation.

We wrote inviting Minister Cripps to inspect the erosion along the North and South Johnstone River banks and we are waiting for his reply.

When I left the Tully meeting I was greeted by a rainbow stretching across the Tully Valley; there is alway hope for a new age when people will again value the Natural World and not need to be 'pragmatic' about the environment.

News from around the traps:-  A young cassowary about three years old has been seen regularly on the beach at Little Cove, Ella Bay, this bird appears to be new to the area and may be trying to establish its home range.

The same person also told me that he had seen quite a few turtle nests and was upset that one of the nests had been dug up and all the eggs had been taken.

The cassowary at the Coconuts still has its three chicks and they have lost their stripes.

Thats all for this week,