Hello from a wet, wild and wintery Coquette Point,

What a difference a week can make in the weather.  Following a month of cloudless skies and winter sunshine we have lost the sun and have no hope of finding it beneath a thick cover of rainclouds. The sugar cane harvest has come to a halt while the cane sits sodden in the fields. The outlook is not good as another large high is expected to replace the one that is now in the Bight. 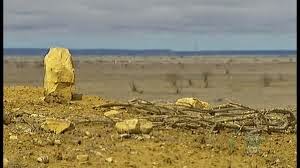 How can we complain when western Queensland is still experiencing crippling drought, and this drought is now extending to the outskirts of Brisbane. http://www.bom.gov.au/climate/drought/drought.shtml 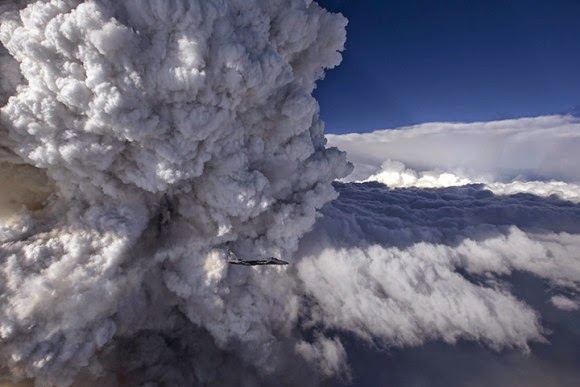 Drought is not only affecting Queensland, in California for the fourth year in a row the rains have failed along the western American coastline and while farmers are watching their crops die, firestorms are destroying the land.

This amazing photo of pyrocumulus cloud, (fire cloud) over California was taken by James Haseltine of the Oregon National Guard. 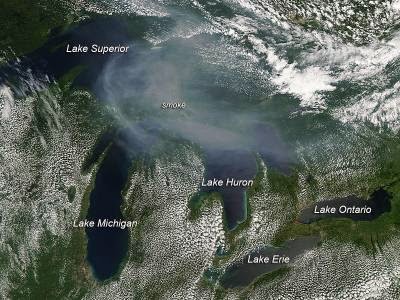 In Canada and Russia over 200 thousand hectares of forest and tundra are burning. Is this all being caused by man made global warming or is it an anomaly in the weather patterns? Whichever-way our climate is changing as every week climate records for temperature, drought, flood, fire, snow-melt and severe weather systems are broken. 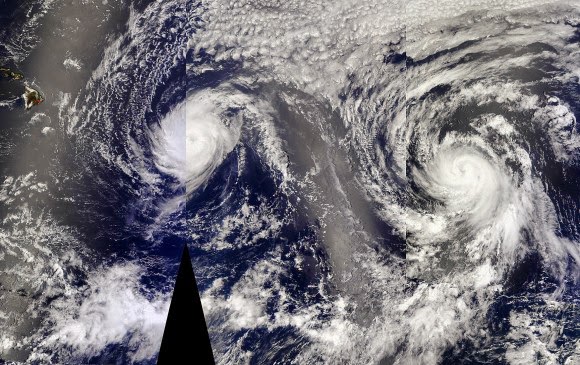 In the North Pacific two hurricanes' Iselle and Julio are bearing down on the Hawaiian Islands. Iselle was a category 4 hurricane but has now weakened however the category 2 hurricane  winds will be enhanced by the Hawaiian terrain and are expected to cause major damage to buildings and infrastructure. The mountains of Hawaii will also enhance rainfall and flooding rain is expected on the North and south of the islands. Not since 1959 has a hurricane approached the Hawaiian Islands from the South, now two hurricane in three days will impact the islands.

The North Pacific is hot,  .93 degrees above average and subsequently a very active hurricane season has resulted. North-west of Hawaii typhoon Halong, now downgraded,  is moving at 9knots towards the southern islands of Japan. Only a few days ago this was a monster super typhoon of category 5.  Gia is fighting back against the out of control human virus and she has awesome powers.

Meanwhile back at Coquette Point the male cassowaries are still rejecting the females. Matriarch cassowary Jessie remains at the top of the Moresby Range wooing Hero while down here Queenie continues to look longingly at Snout and crossly at Ky.

However, when Queenie does look at Snout and Ky they run away as fast as they can. If on these occasions she is making any sound at all it is sub-audible to the human ear. 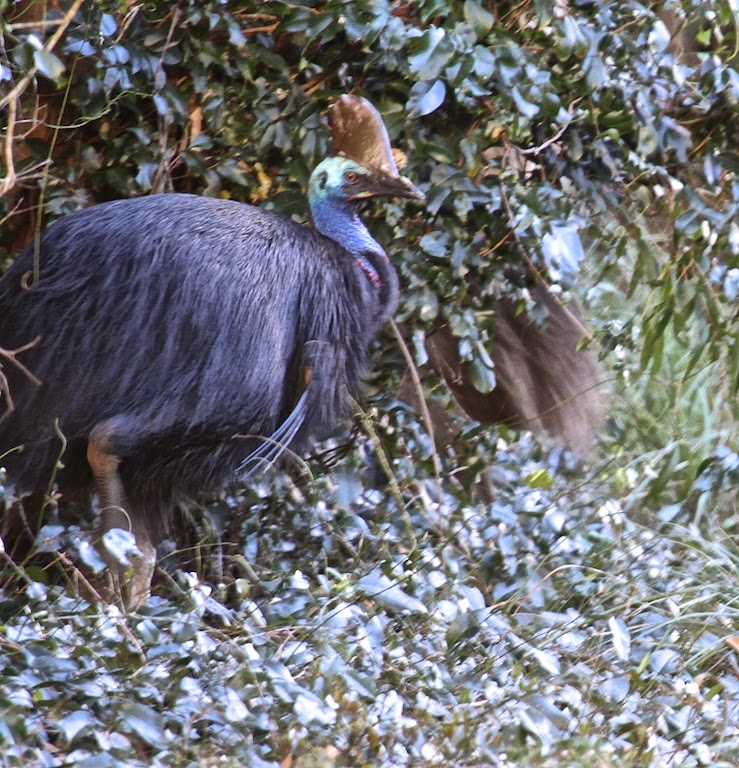 Ky is showing greater confidence and I often see him striding out ahead of Snout as he was when I met them on the rainforest track this week. 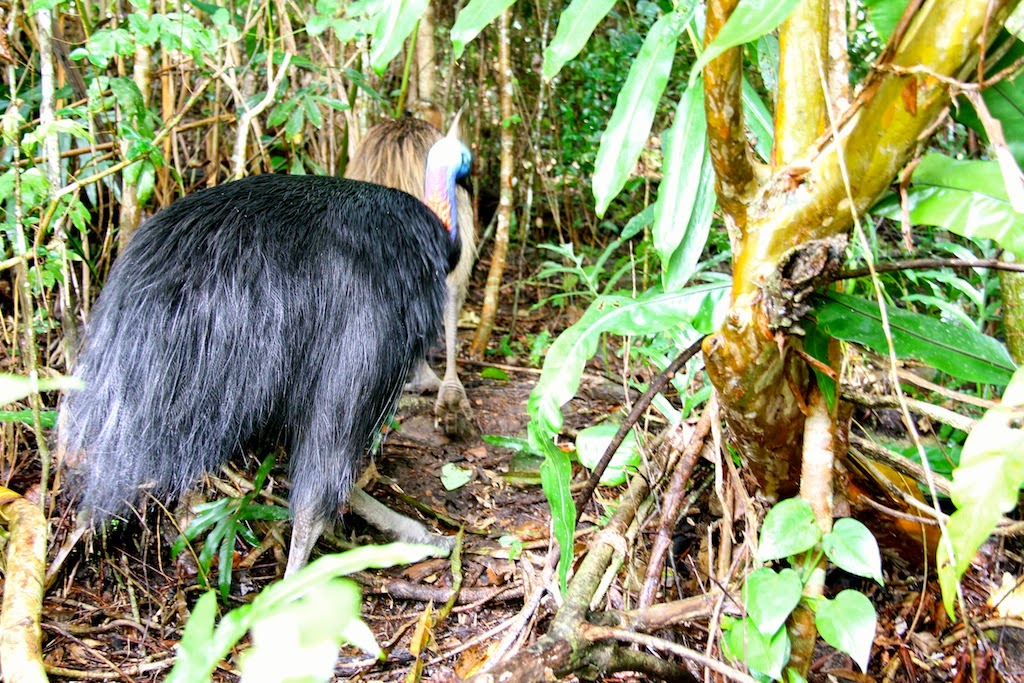 Pandanus fruits are starting to fall and the cassowaries are checking out the trees two or three times a day. Ky has no problems in swallowing the large fruits. 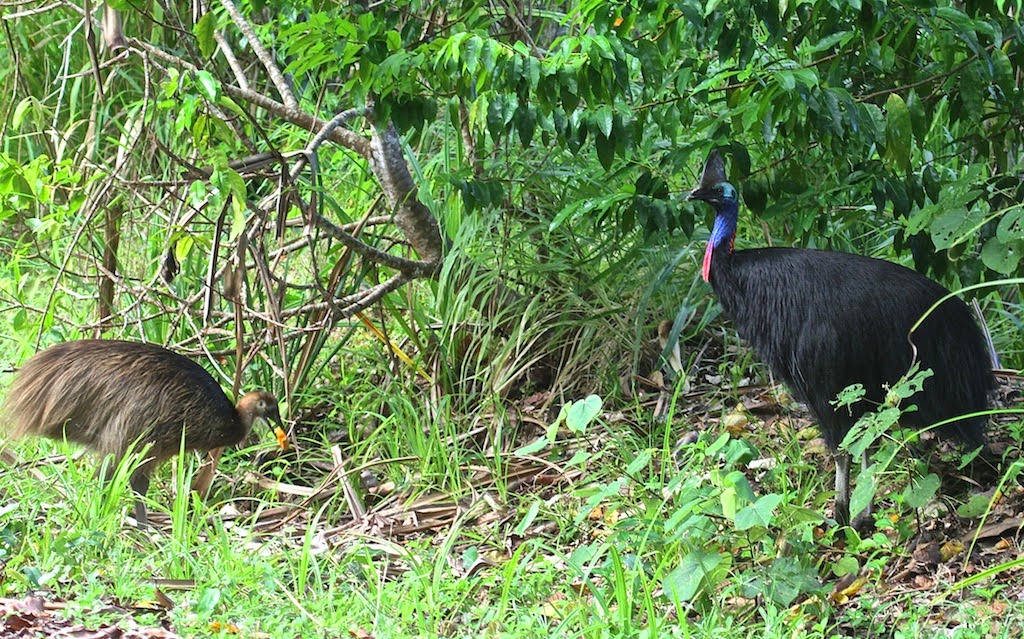 Queenie walks through the nursery most days on her way to the beach. One day I saw her stretching up and with her feathers raised I new she was upset. 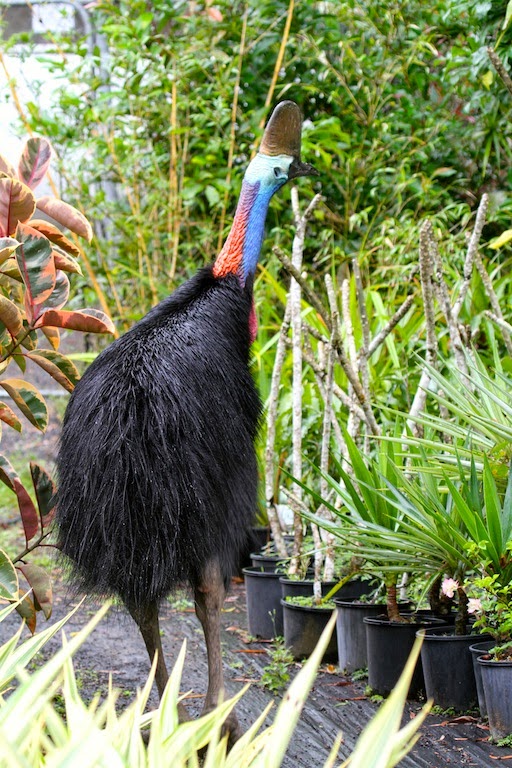 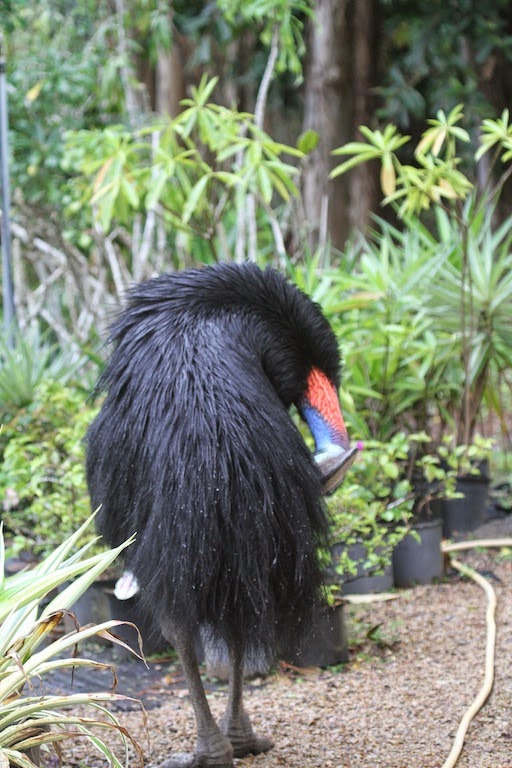 Queenie started pulling at her feathers in a typical territorial display. I could not see another cassowary around and then I realised she was displaying at two of my customers. They were both wearing black rain jackets, carrying black umbrellas, one lady was wearing a red scarf and the other a red tea-shirt. Queenie thought they were cassowaries.

At my request the ladies put down their umbrellas and took off their raincoats. Queenie watched and it was soon obvious she realised they were not cassowaries and she moved on. Lee-ann and her Mother couldn't stop laughing at the experience. Both ladies were safely behind a fence when this occurred. It is obvious that colour recognition plays an important part in cassowary behaviour, it is also a lesson not to wear red, black and blue combinations when walking in cassowary country.

The cool wet weather is promting the growth of some amazing fungi. I found this strange growth in a pot in the nursery. 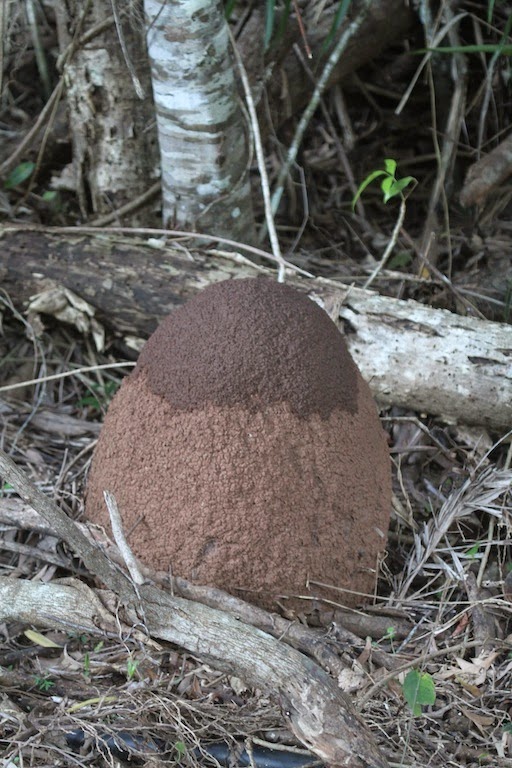 In the rainforest the termites are very busy and you can measure their activity by the colour of the new wet mud added to this mound, all within a week. 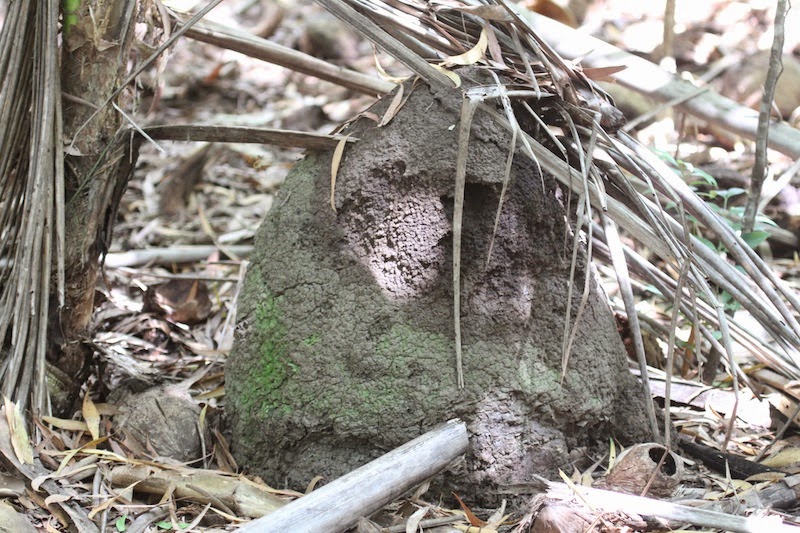 The mound on the left has been attacked by some creature. Many animals nest in termite mounds, parrots, kingfishers, kookaburras, geckos, pythons, lace monitor lizards and moths. I do not know what is making the hole in this termite mound however, I am keeping a lookout, perhaps it is a kingfisher.

Several pairs of the beautiful sacred kingfisher have moved from the Atherton Tablelands to Coquette Point for the winter. When the sun came out for a few hours this week I was lucky to find them in the mangroves. 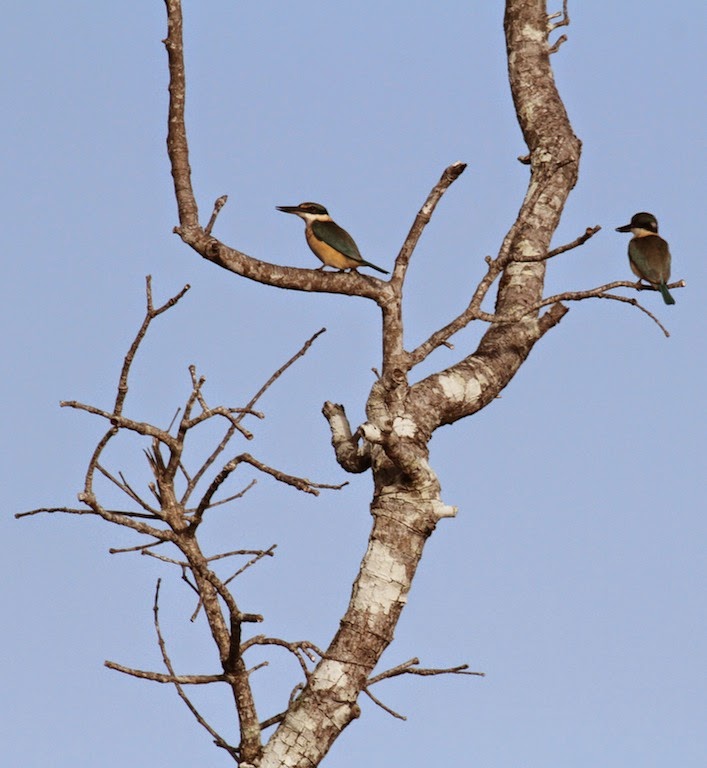 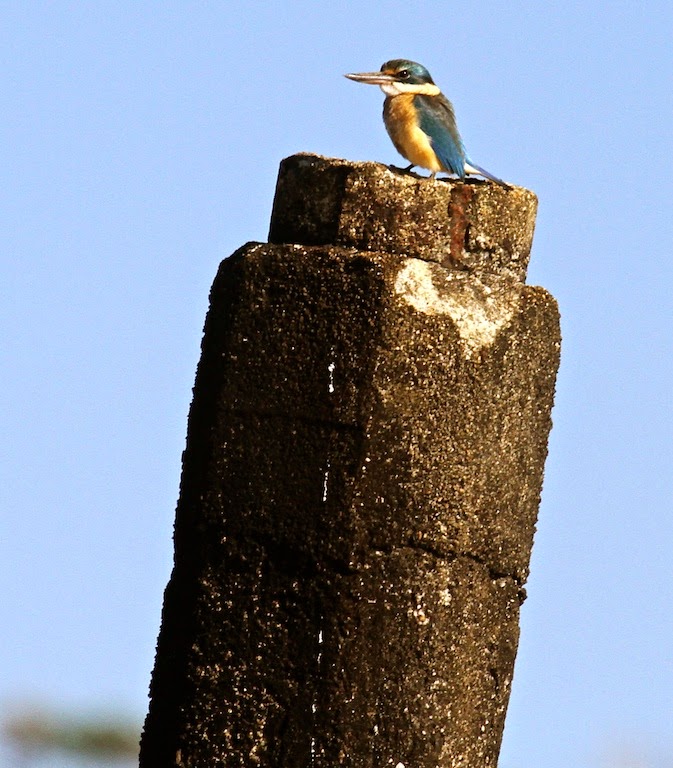 Collared kingfisher is also here and was looking for any movement in the shallows. 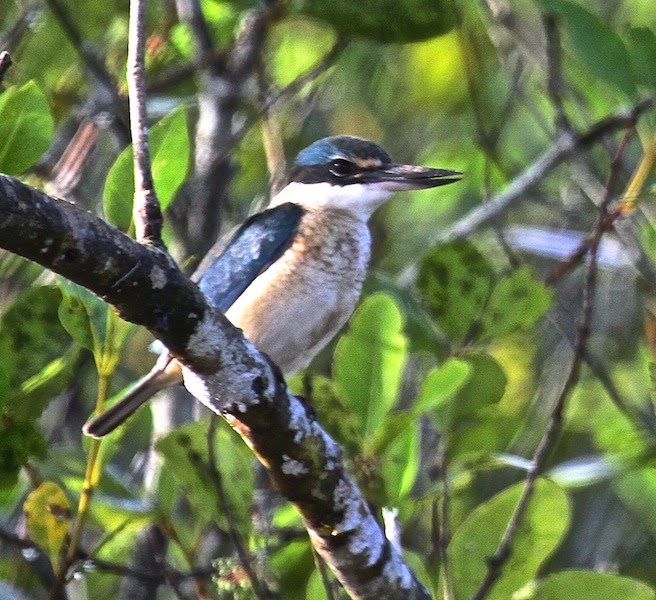 Forest kingfisher numbers seem to have increased and they can be found all over the urban areas as well as on the beach and in the mangroves.


When the sun came out for a little while I found a male birdwing butterfly, newly hatched, hanging out to dry on a cattistemon shrub.  It hung around for about an hour before it flew into the rainforest, disappearing against the green canopy as it hid its bright yellow under-colours in flight. 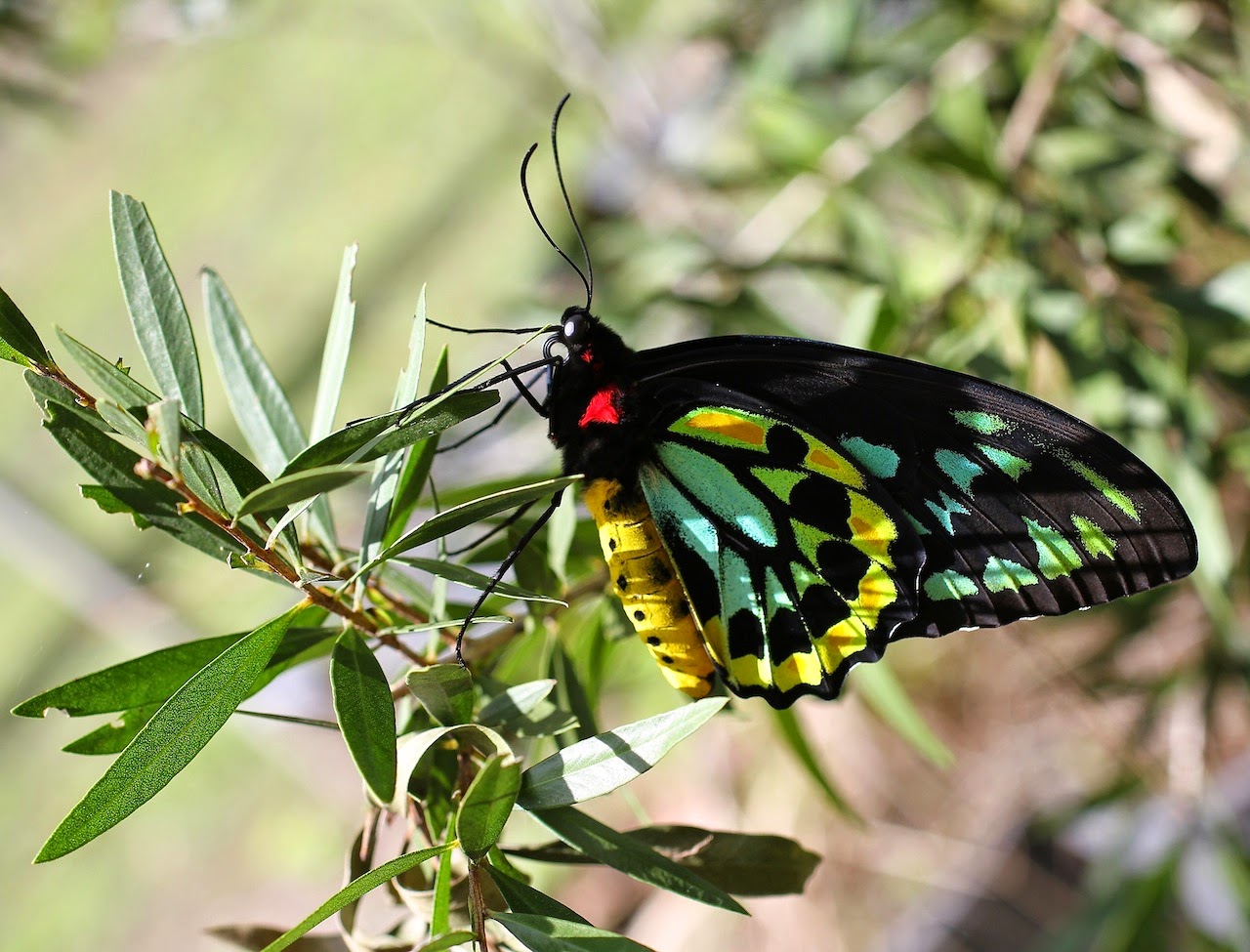 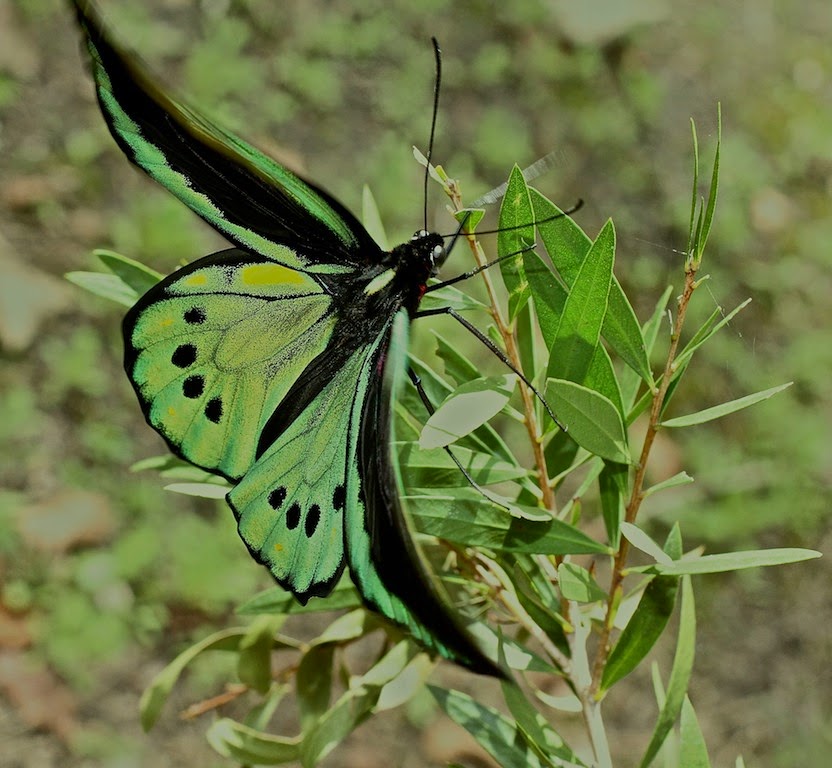 It is quite surprising to find many butterflies active  at the moment considering the strong winds and driving rain. 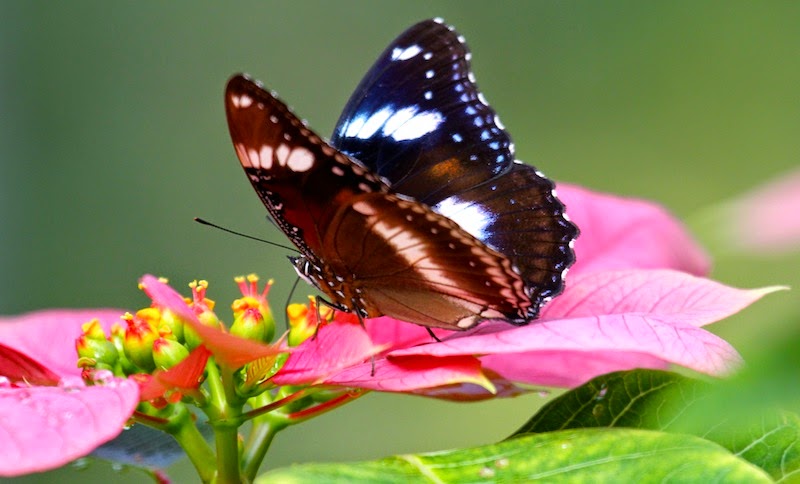 Male egg-fly feeding on the tiny flowers of an exotic poinsettia.

While we commonly admire the beauty of the butterfly, rainforest moths are every bit as flamboyant in their colouring. Below a pink underwing moth, Phyllodes imperialis smithersi 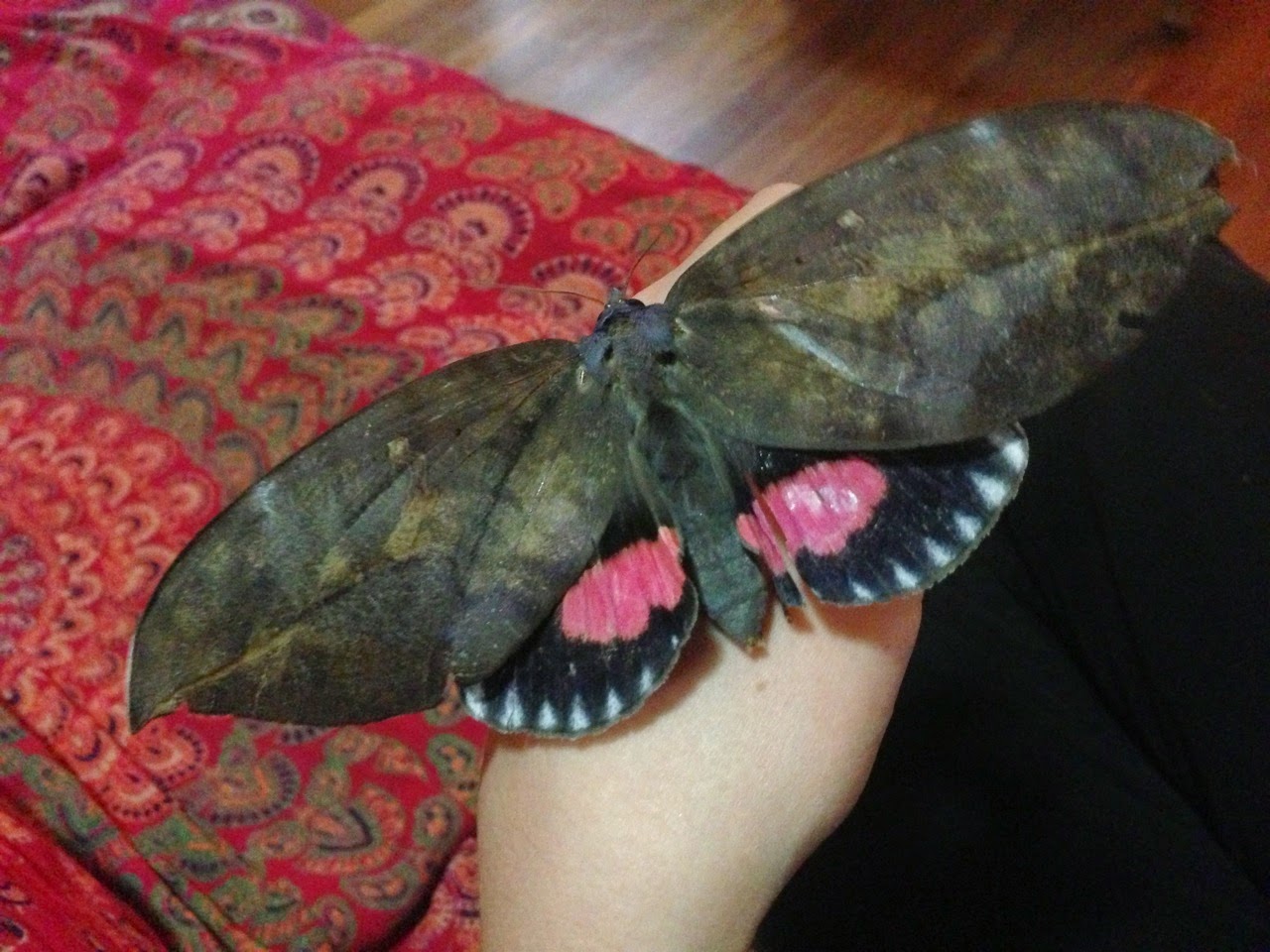 This photo was taken by entomoligist Richard Piper from Cowley Beach.   P imperials is listed as endangered under the EPBC Act. You can gauge its size from Ingrid Piper's hand. Richard found the moth on a grapefruit in his orchard, however, this moth is not believed to be a fruit-piercing-moth.  The host plant for  P imperials is Menispermaceae sp.

Coquette Point entomologist Bill Farnsworth had a few moths drop in on him recently and he shares his photos, thank you Bill. 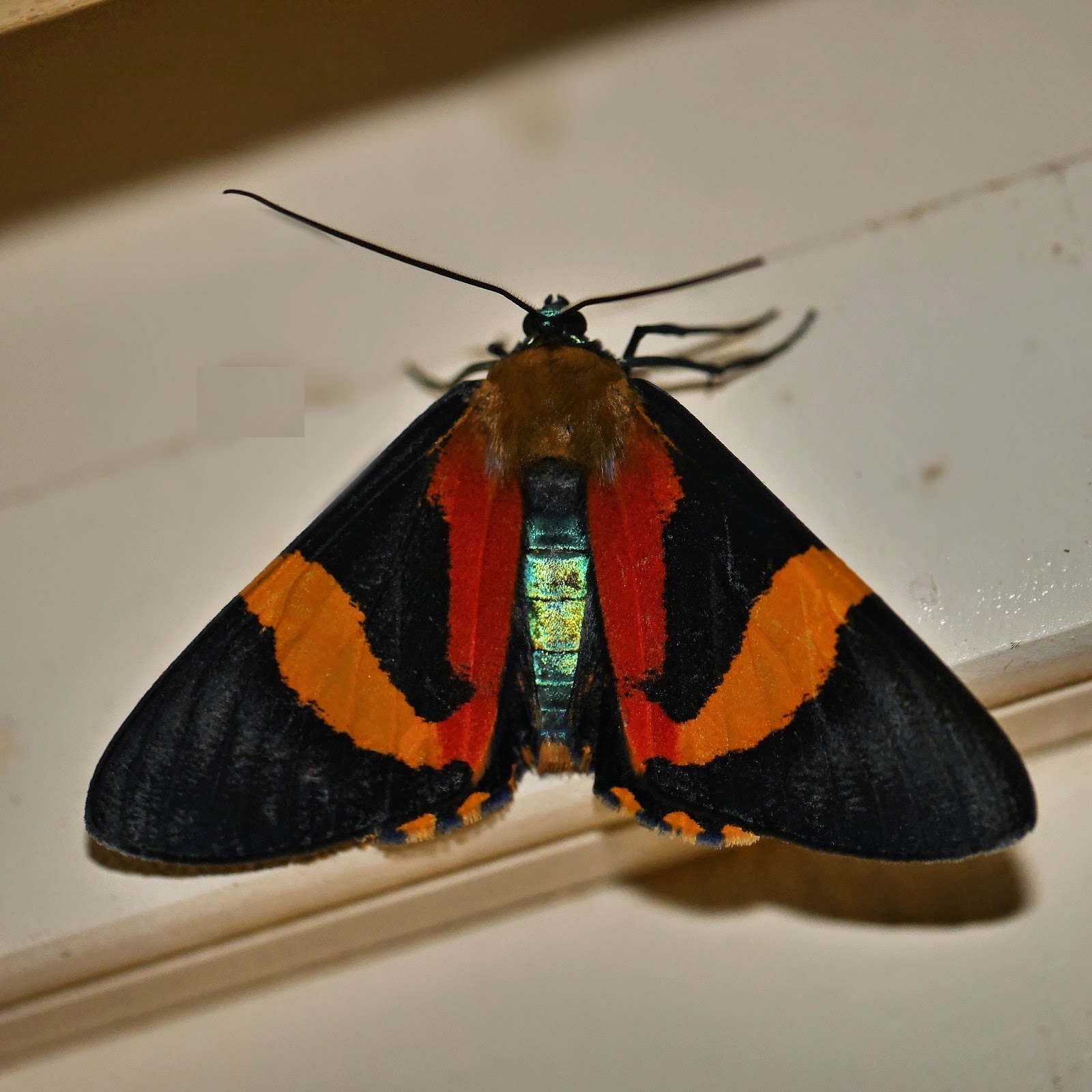 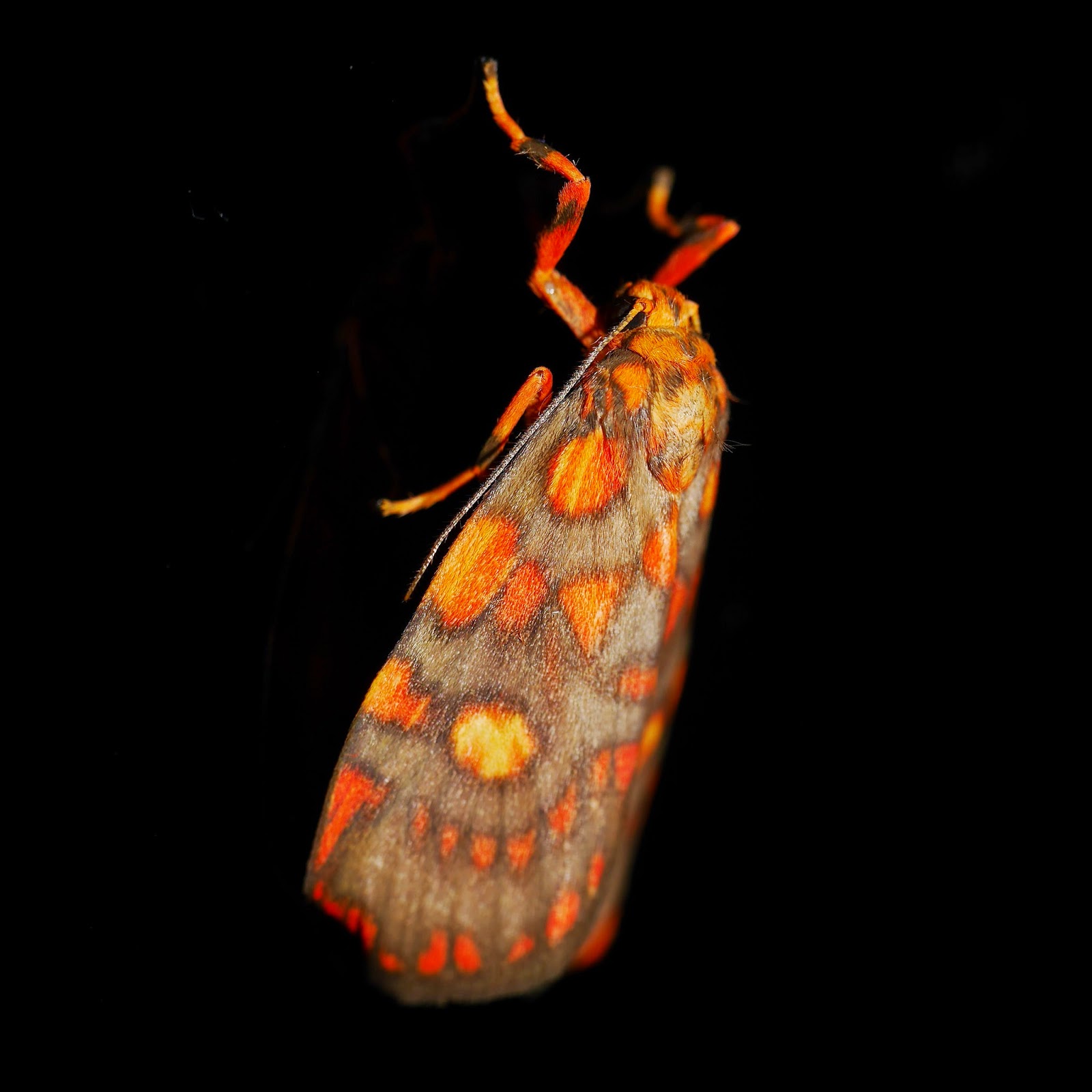 "Magic mirror on the wall, who is the fairest one of all?"


In the under-storey of the Wet Tropics rainforest of north Queensland the beautiful pink flowers of the rainforest vine Tecomanthe sp. Roaring Meg are opened. While the blue fruits of the ginger Alpinia caerulea are ripening, much to the delight of the cassowaries.

Growing from the forest floor to the canopy the new red leaves of the rampant vine smilax blumei reach out their tendrils and small hooks to find support from their host as they reach for the sunlight.

While in the swamps along the coast the swamp banksia, Banksia robur has opened its nectar filled flowers and busy native bees are collecting the golden drops and carrying them to their hives. 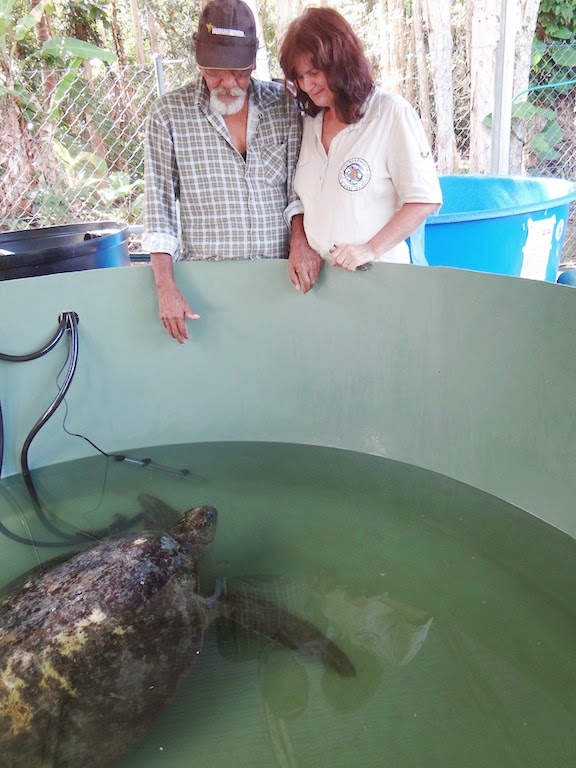 Cindy-lou the green sea turtle is still feeding well and it will not be long before she is released. As soon as Henry and Nellie bent over the tank today Cindy-lou raised her head to look at them. The Turtle Rehabilitation Centre has new signs and pictured below Henry and Nellie with the new signs. 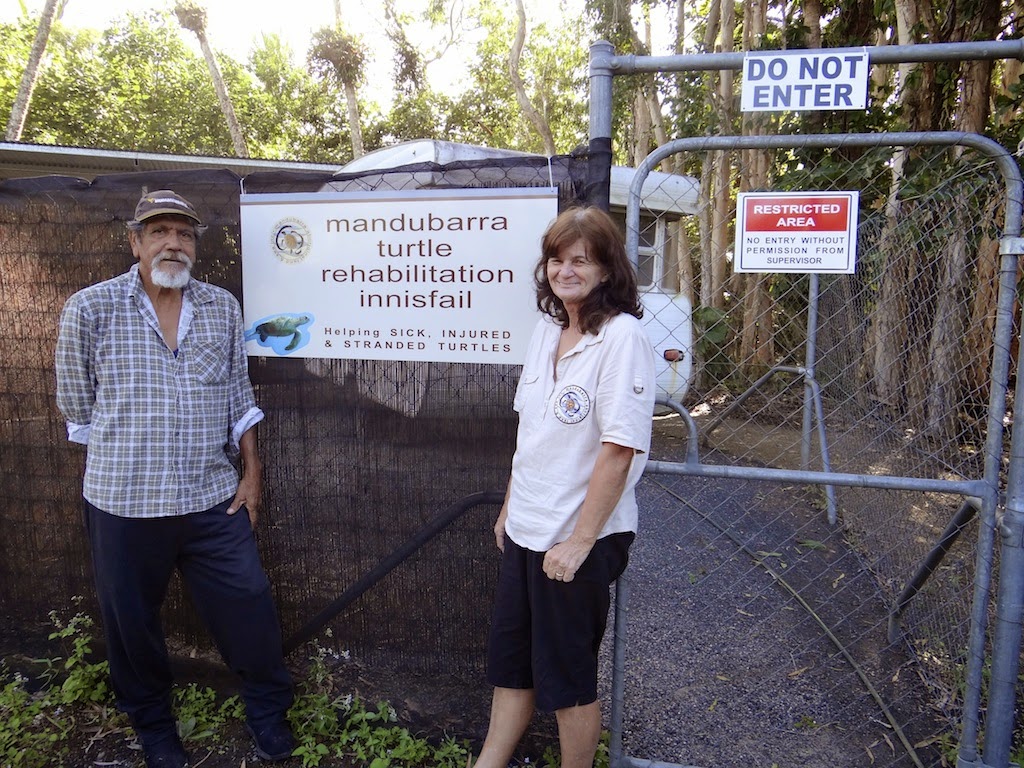 If by some lucky chance the clouds lift tomorrow evening, 10 August, where you are, take the time to watch the super-moon rise. This moon will be the biggest super-moon of the 2014 year, 13% bigger and 30%brighter than normal.

Watery cheers for this week,