A week of winter sun has dried out the soggy ground and left the country side fresh and green. The outlook is for a winter pattern of high pressure systems moving across central Australia, so this perfect weather should continue. 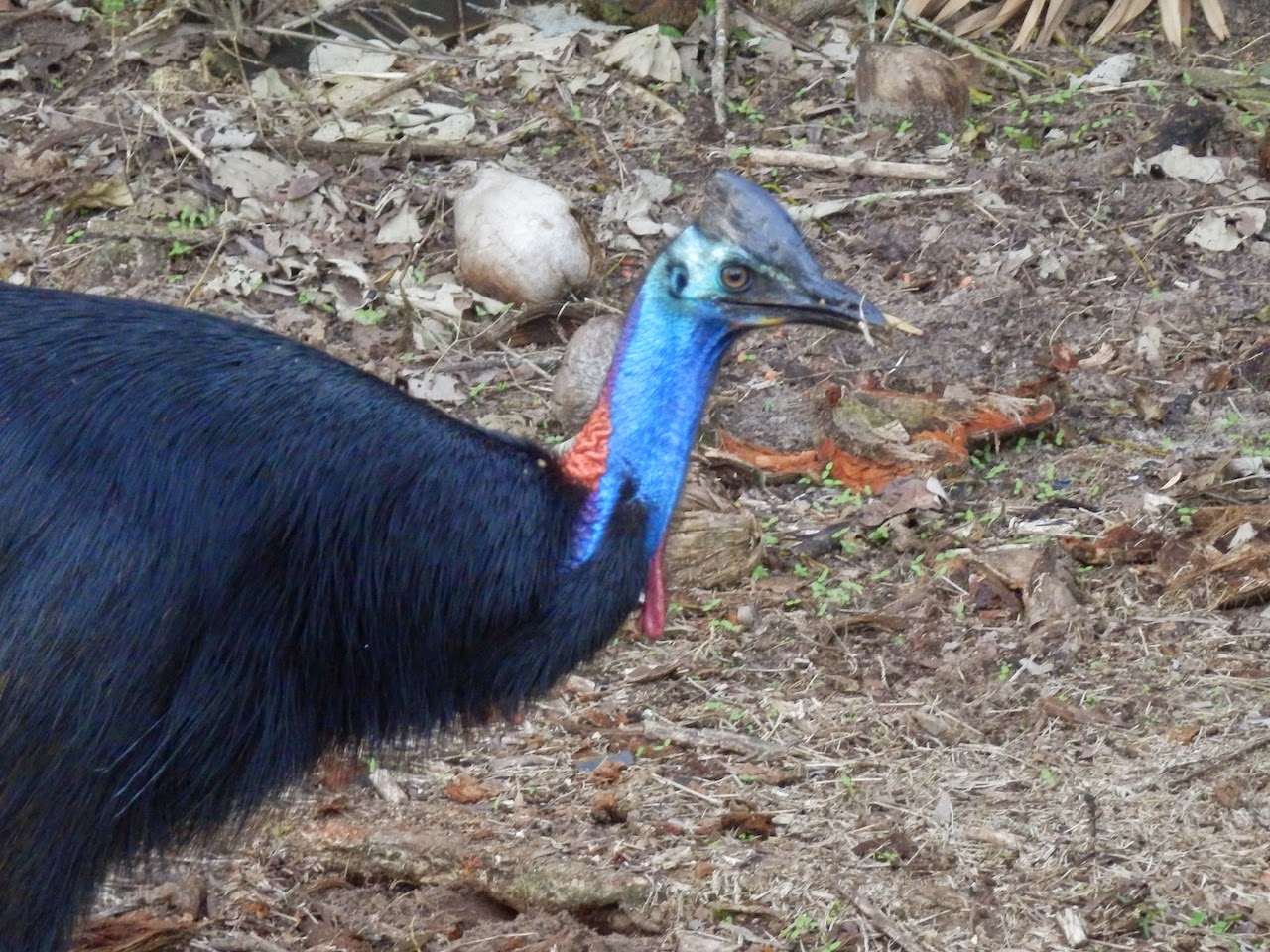 Wonderful news from Ruth L, each day this week she has seen a young male cassowary with one stripy chick walking around the houses at the top of the range. The chick looks about six weeks old. Neither Ruth nor neighbour Jan can identify this cassowary. Ruth thinks it is a young cassowary as his casque is small and unmarked.

I think it is Don.  Don is Queenie's sibling and the last time I saw him was 12 July 2012, the photo on the right is my last positive record of Don.

Checking my cassowary diary I noticed Jessie was missing for all of April, no one reported seeing her that month. Then she was photographed by Wendy Sheils on the beach at Coquette Point on May 3.  The time-line could be Jessie and Don courting April, Don sitting on the eggs May and June. The eggs would then hatch late June early July.  All of the mating activity, in this instant would have happened within the Moresby Range National Park, out of sight of the urban human population.

I don't know what has caused this young male to now bring his solitary chick into the urban area, or why he has only one chick. However, there are still territorial battles occurring between the cassowaries as from time to time I hear chasing and drumming coming from within the rainforest, and there are dogs still off- lead and roaming in and near the Moresby Range National Park. Let's hope this little chick survives and if it does Ruth, we will need a name from you for the first chick of 2014.

Meanwhile there is still a stand-off between Queenie and Snout. Snout does not seem to have any desire to kick his chick Ky out, no matter how much Queenie flutters her eyelashes, although he is looking. 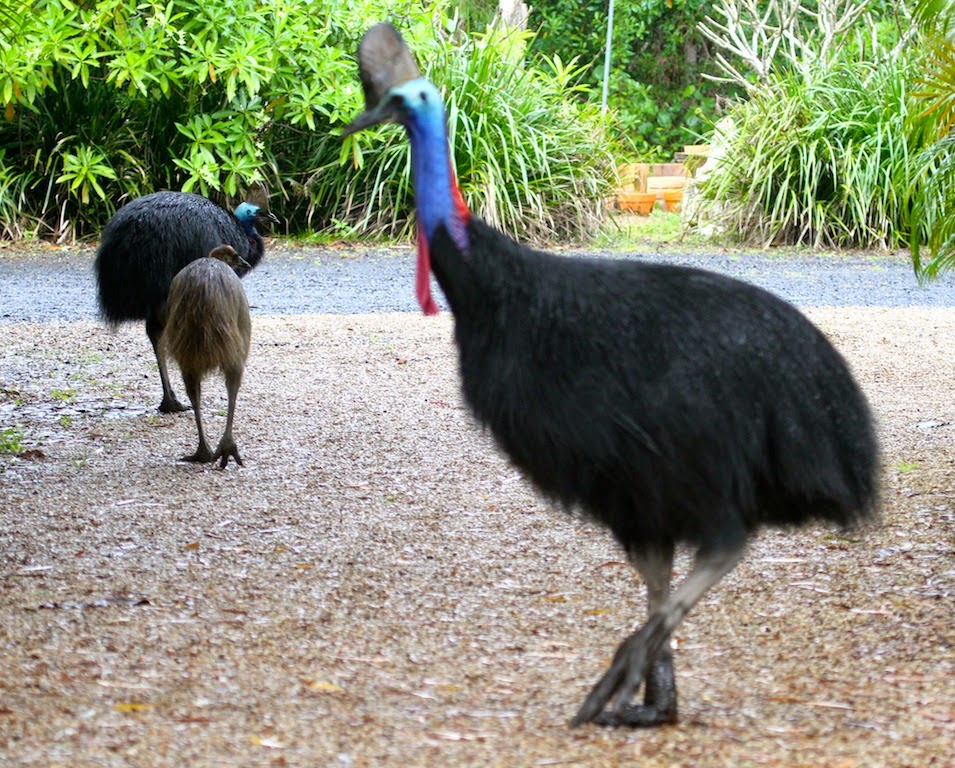 Some days Snout hangs about close to the water ponds. Eventually Queenie shows up. The two cassowaries look at each other. 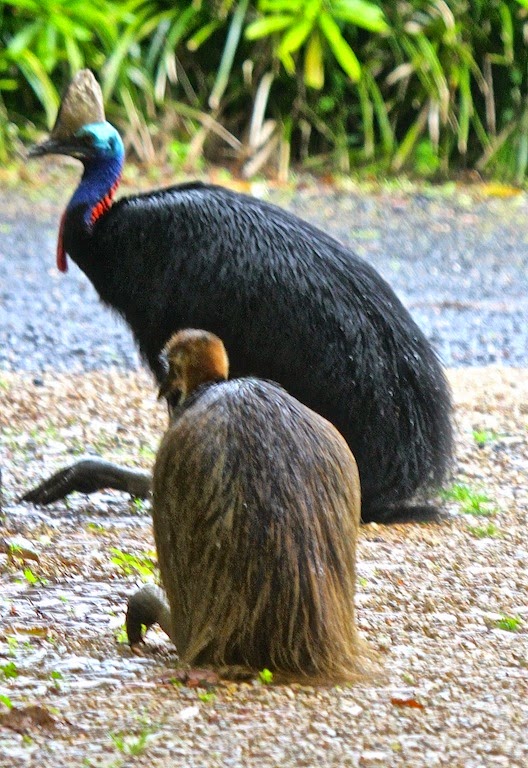 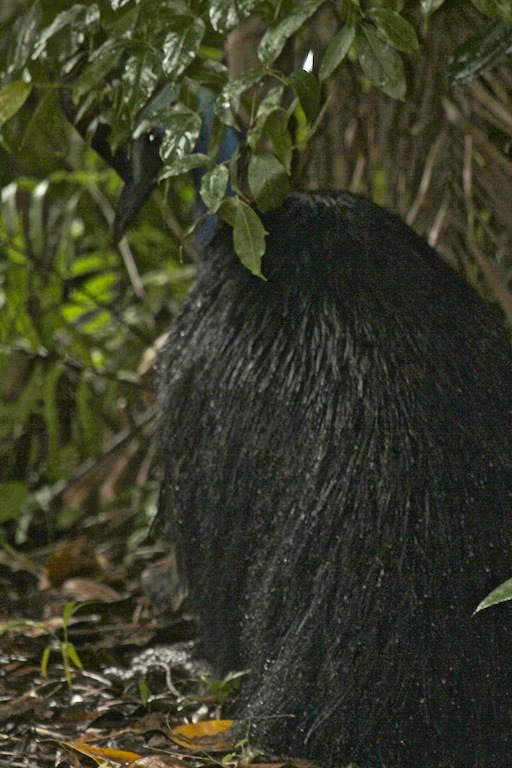 Snout will often sit down followed by Ky and they sit around glancing at each other until one or the other decides it is time to be somewhere else.


Sometimes it is Queenie who sits down at the rainforest edge waiting. 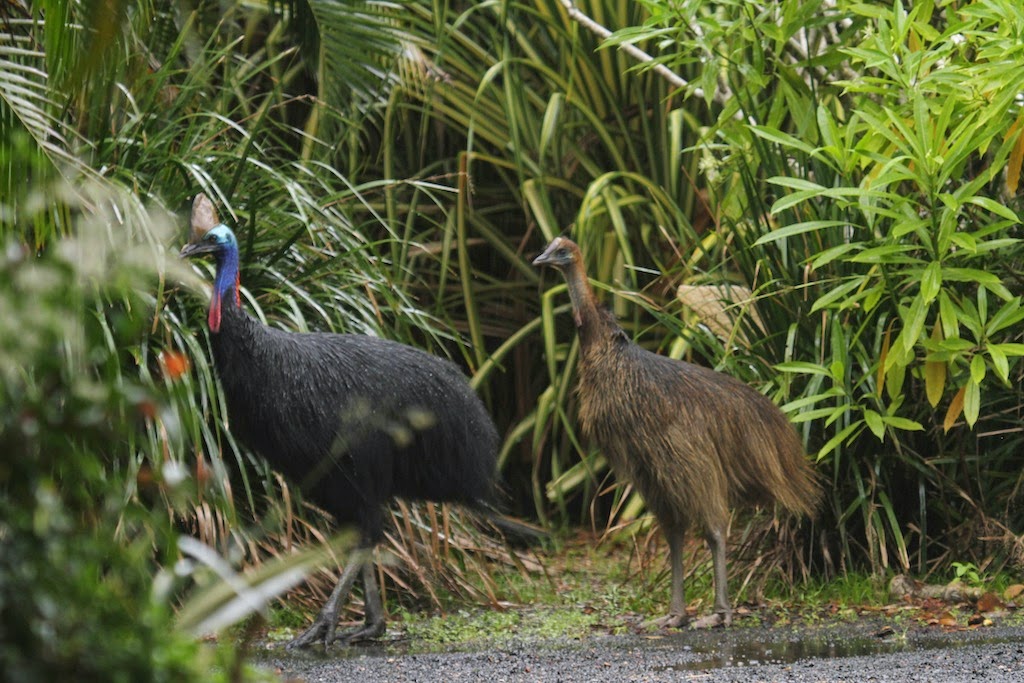 When Snout arrives and sees Queenie he becomes quite disturbed, stretching up and dancing around on his toes. Ky often copies his Dad's actions. Then Snout will hide behind the bushes and stretch out to see if Queenie is looking at him. 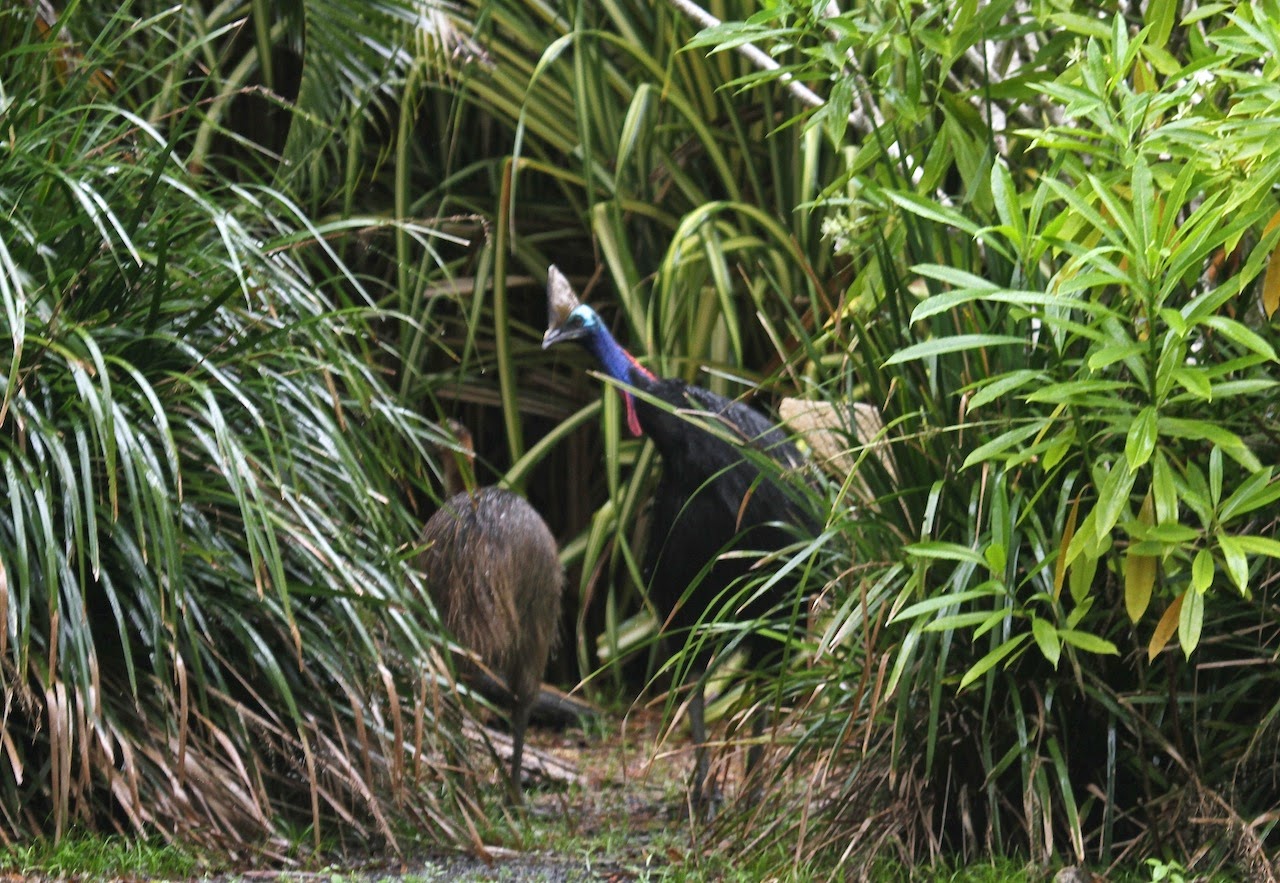 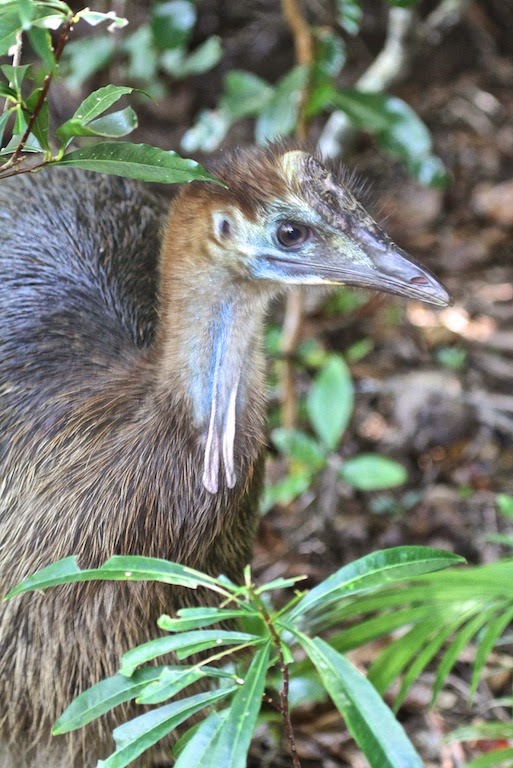 Ky is 10 months old and the first signs of a casque can be seen forming on his head. Soon he will be forced to bear the responsibilities of adulthood.

" Yours is the Earth and everything that's in it,
And- which is more- you'll be a Man, my son!" 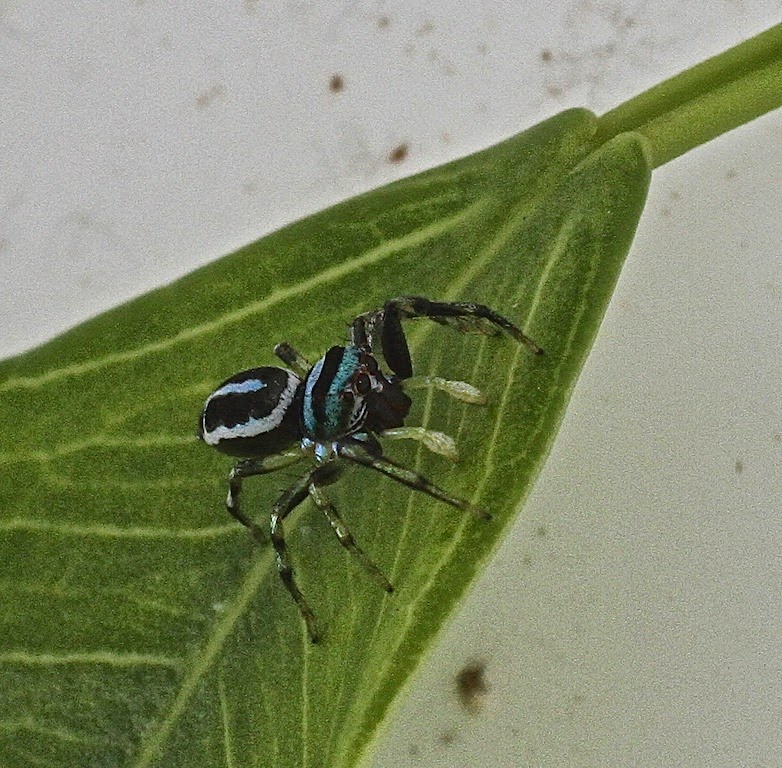 Although the nights are still cool the days are very warm. The jumping spiders are actively feeding on insects and enjoying the daytime warmth. The brilliant iridescent and metallic colours of the Cosmophasis sp. of jumping spider are peculiar to this species and make them distinctive to observe. 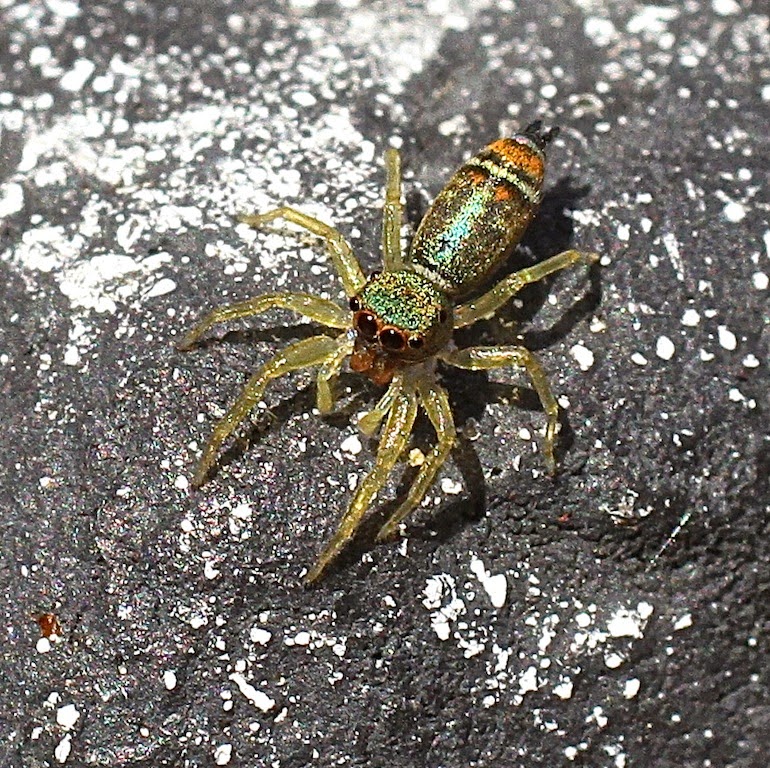 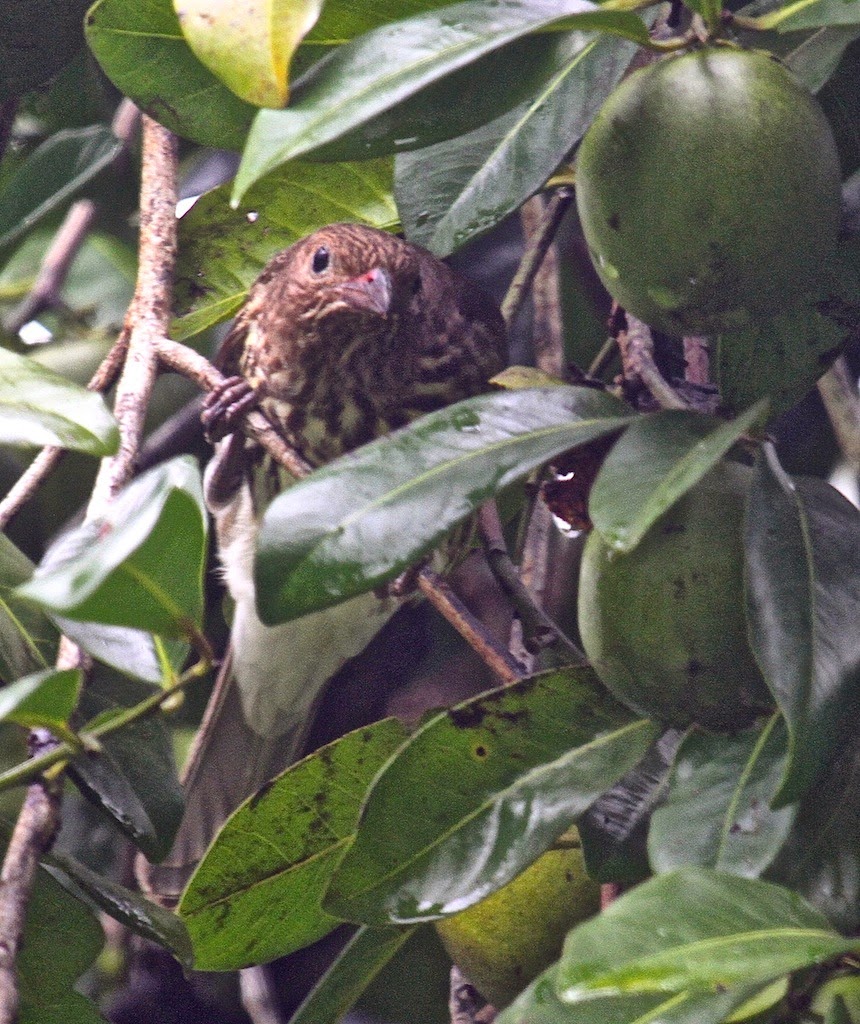 The fig bird's noisy chatter starts of a morning in the exotic black sapote tree where the fruits are ripening faster than I can collect them. When the fig birds feed on the fruits they knock many to the ground much to the delight of Snout and Ky who will sit under the trees for hours waiting for breakfast to fall in their laps.

The birds will then shift to the Alexandra palms, which are still bearing ripe fruits. Once these palms, Archontophoenix alexandrae covered much of the low-land coastal plains of the Wet Tropics, now only tiny remnants of Alexandra Palm swamps remain. These palm swamps acted as a filter for run off water in the wet season and a major food supply for cassowaries and other birds throughout the year.

The bright yellow flowers of the Golden Bouquet tree, Deplanchea tetraphylla,  are full of nectar and attracting birds and insects. 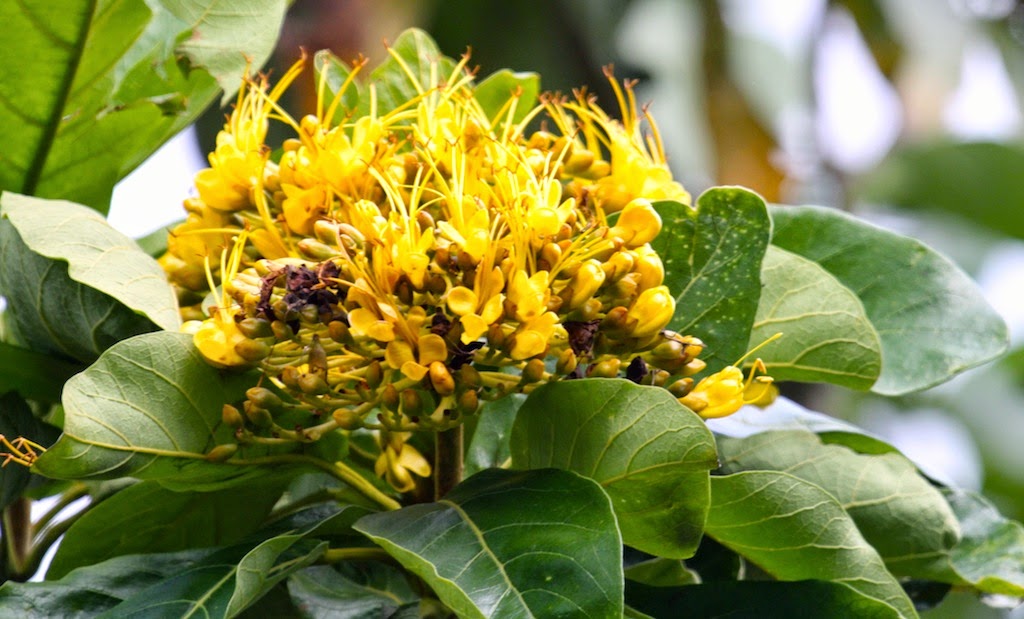 This beautiful Wet Tropics Rainforest trees is now being growing in backyards all over FNQ. 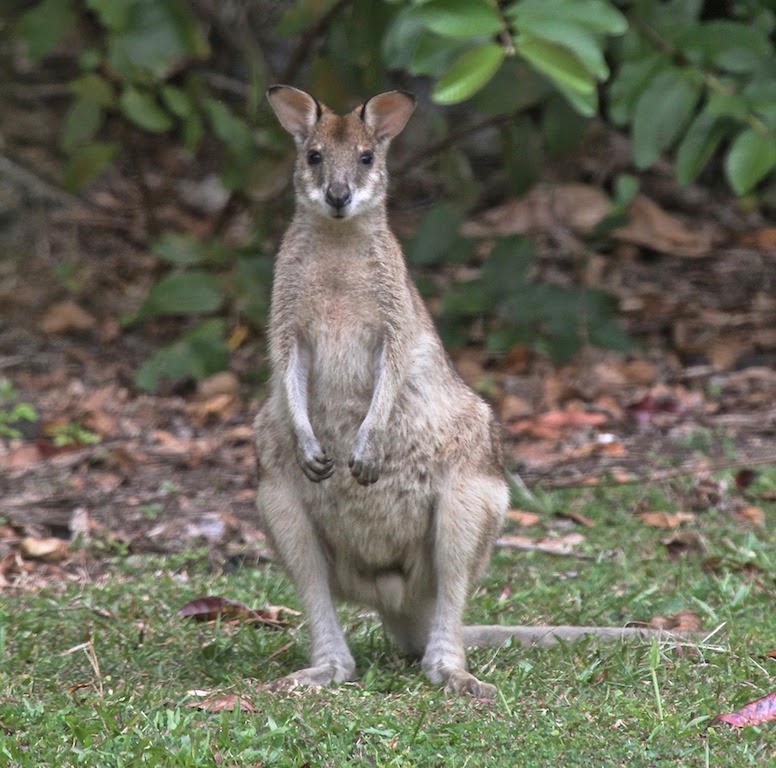 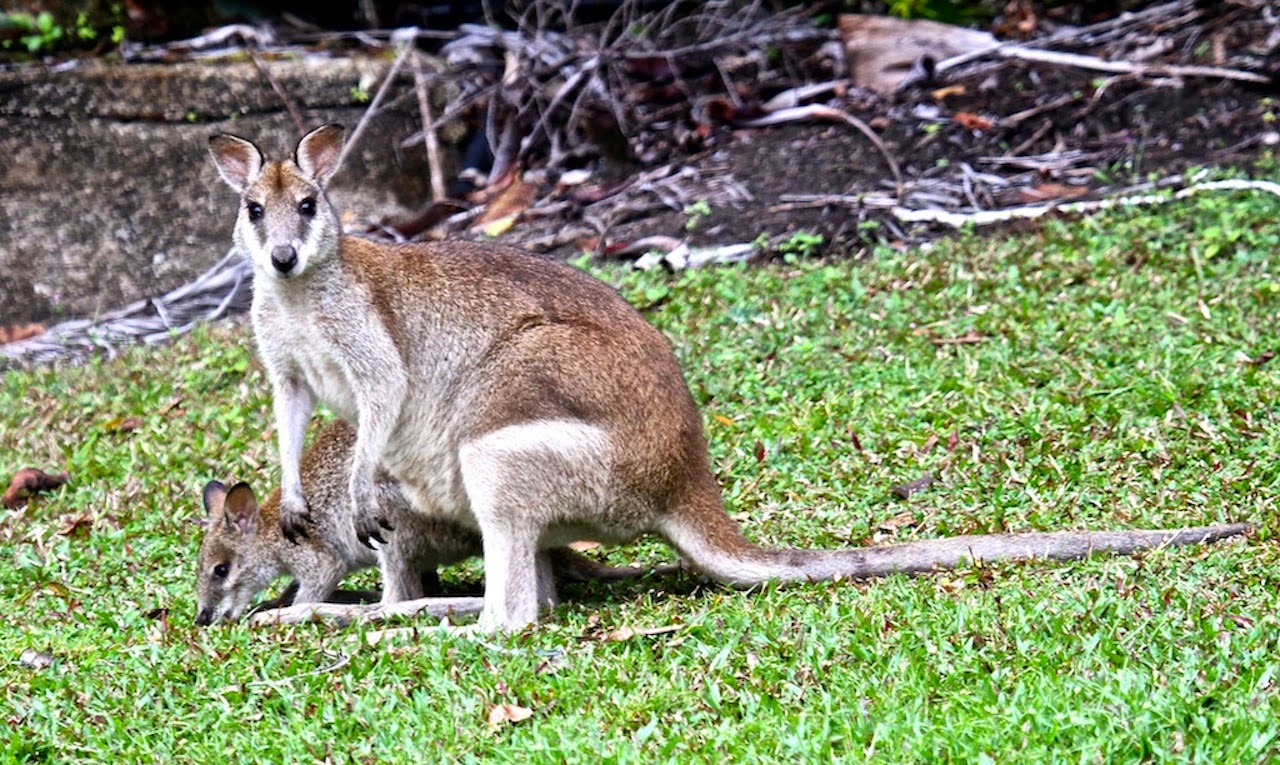 In the warm weather the Agile Wallaby joeys are leaving their mother's pouch. There is plenty of green picking for them at the moment.

Agile Wallabies will eat garden plants, so if you are privileged to live in their habitat and want to grow an exotic garden, protect the garden with a fence.

A tourist in Townsville told me the other day he would not come to Mission Beach because the people there were killing wallabies! All our actions impact on the environment. With an active internet they will also impact on our livelihood especially when it is perceived that a few people are acting immorally.

Cheers for this week.