Low tide in the middle of the day this week and combined with perfect winter weather created the ideal conditions for a stroll on the beach. 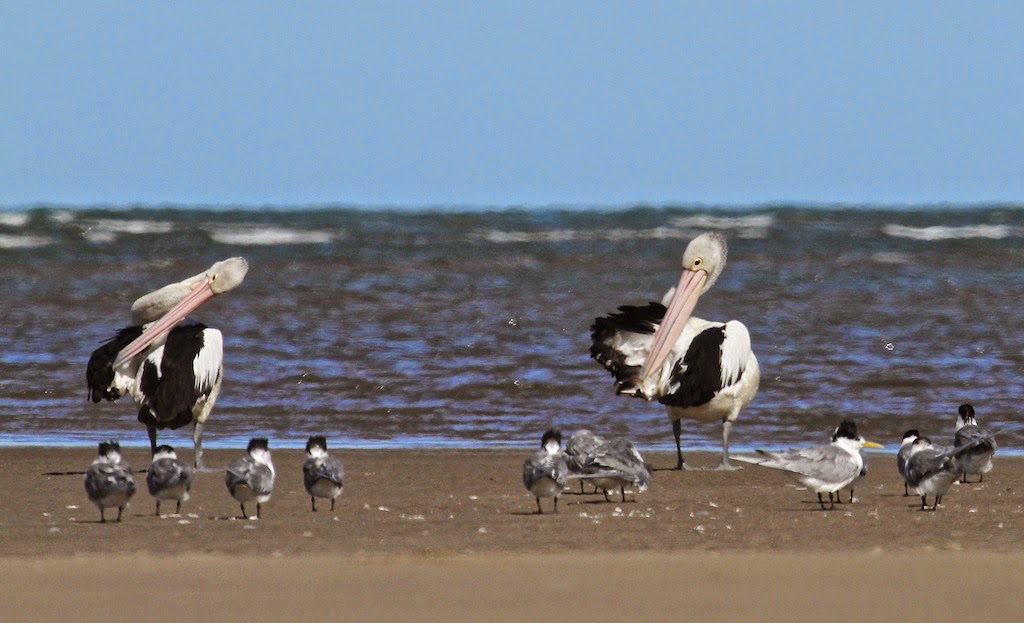 Clustered together on the outermost sandbar resident terns and pelicans rest and preen in between fishing expeditions. 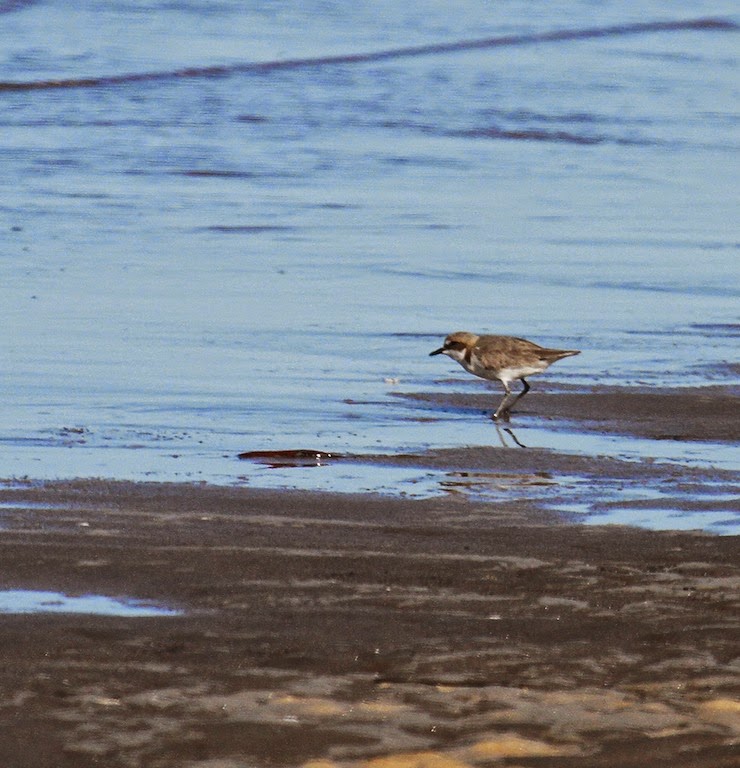 
It is that special time of the year, as the days lengthen, when the resident shorebirds are joined by migratory waders arriving from as far away as the Siberian Tundra. Many fly day and night without any rest until they reach their destination. The first of these migratory waders are arriving on the mudflats and beaches of north Queensland. These little birds are returning to Australia from the Northern Hemisphere and will spend the summer feeding on our beaches and in some cases, like the Little Tern, returns to Australia to breed.

I found a newly arrived solitary Pacific golden plover feeding in the surf at Coquette Point on Friday afternoon.

On Wednesday I was delighted to see a flagged grey-tailed tattler. This is the first time I have observed a tagged migratory wader at Coquette Point. I reported the sighting to Birdline North Queensland and I received a return email advising, "Your report has been forwarded to the Queensland Wader Study Group who co-ordinate these leg flagged wader sightings, they will be very pleased to receive your report."
If you are lucky enough to see a flagged migratory wader please report it to the Queensland Wader Study Group or Birdline North Queensland. 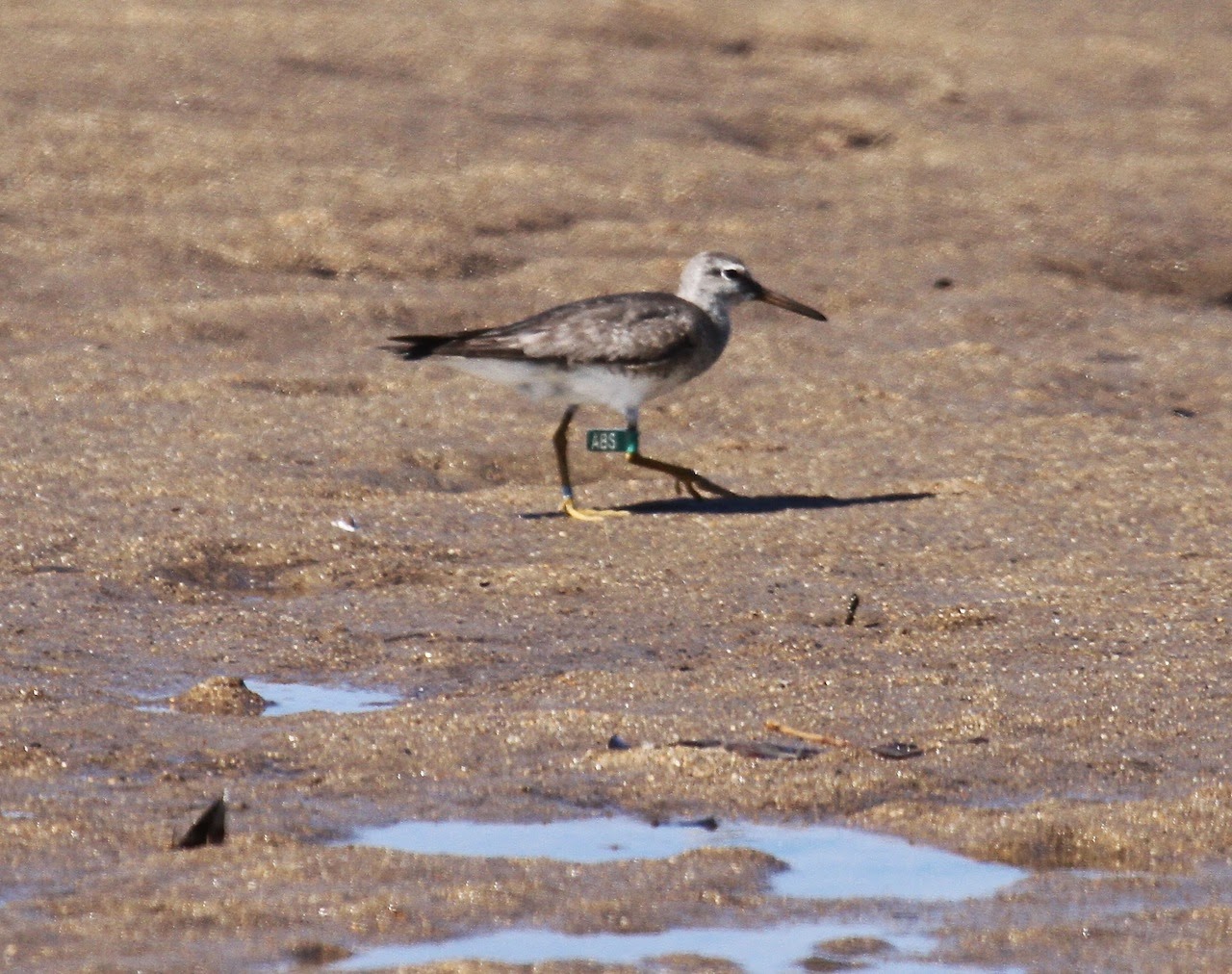 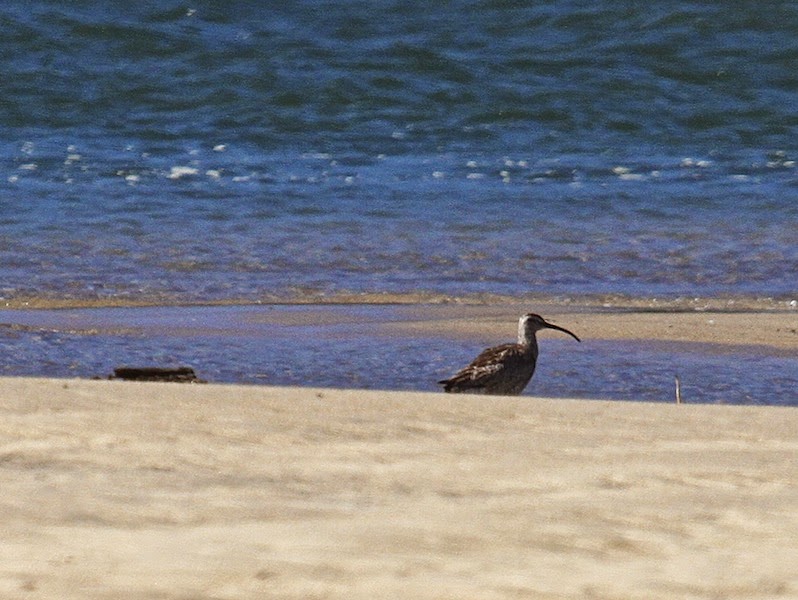 Whimbrels have also started to arrive from the Northern Hemisphere and I saw three whimbrels on the beach on Thursday. 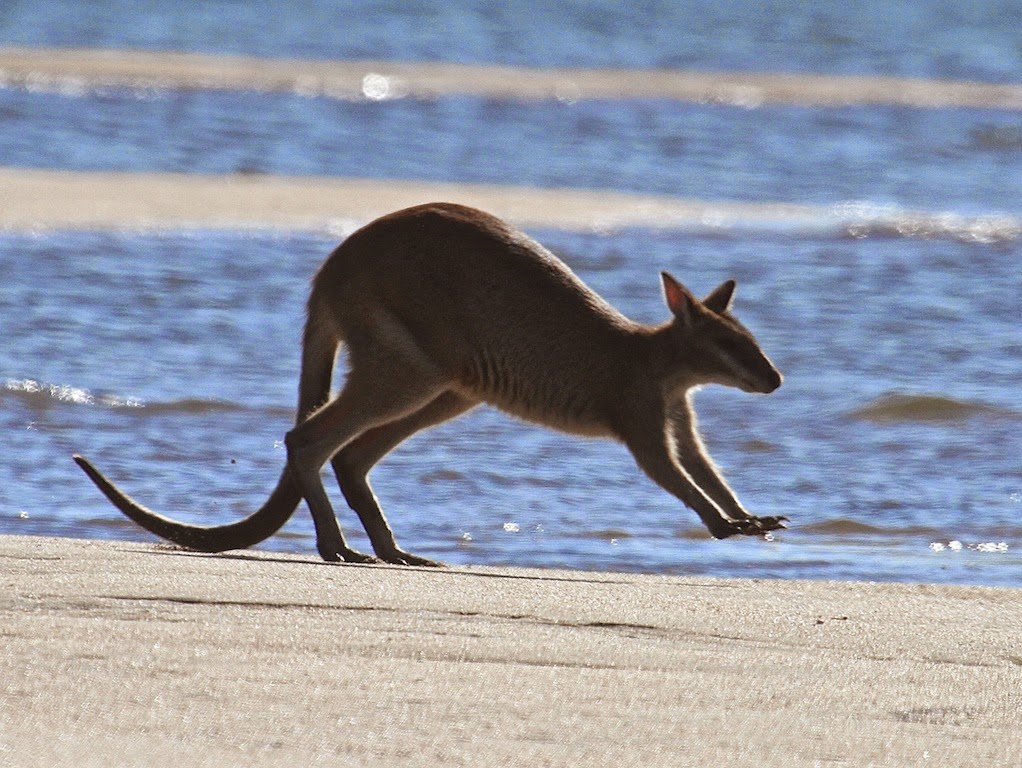 Unfortunately, in spite of the 'no dog' sign people are still walking dogs on the beach in the wader feeding areas and across the rookery at Coquette Point. It is astonishing that some people take dogs into areas reserved for migratory waders, in so doing they clearly demonstrate their ignorance and total lack of appreciation of the natural world.

The migratory waders are exhausted when they arrive on our shores and they have little energy left to survive a dog chase. The areas set aside for migratory waders are few and far between.  Why have these people so little understanding that they cannot leave these very few areas free of dogs so that these rare and in many cases endangered birds can rest, feed and breed? 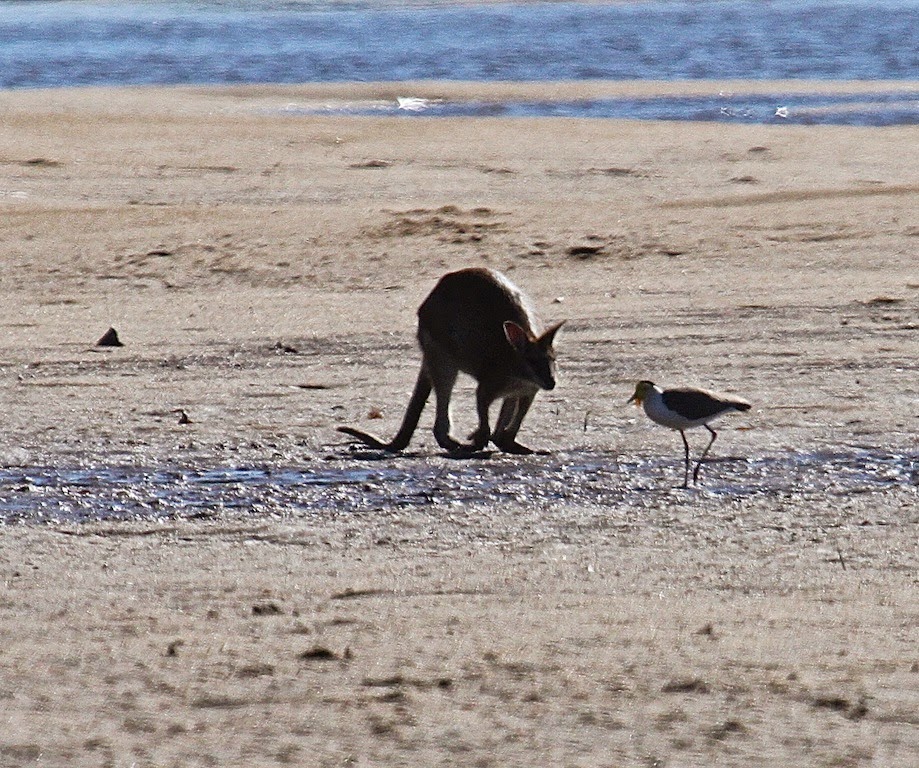 On my way back from my walk on Wednesday I was surprised to see an agile wallaby hop out onto the sandbar and move towards a plover. 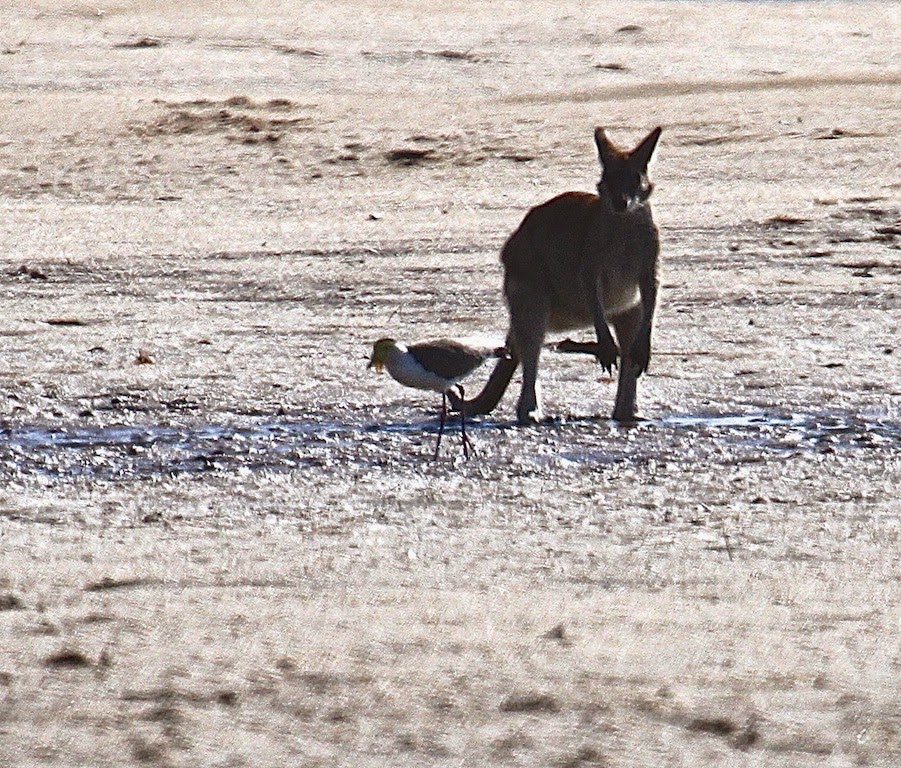 Plover did not want to play with wallaby and it walked away. 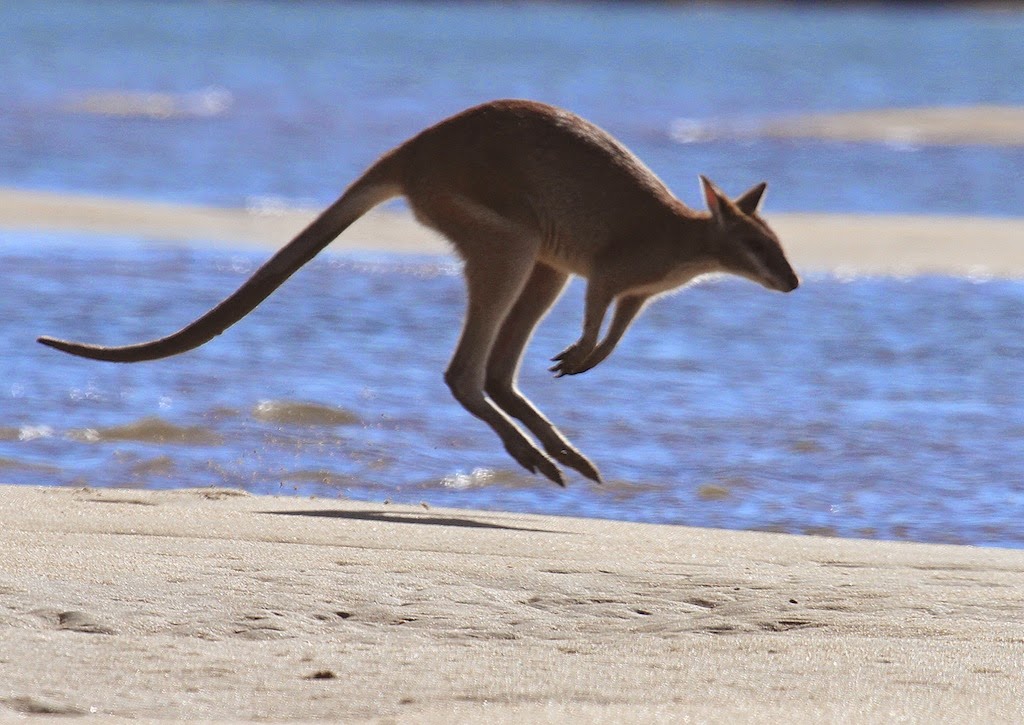 Wallaby watched plover walk away and then decided he would explore the beach.

Wallaby hopped over to the water's edge. 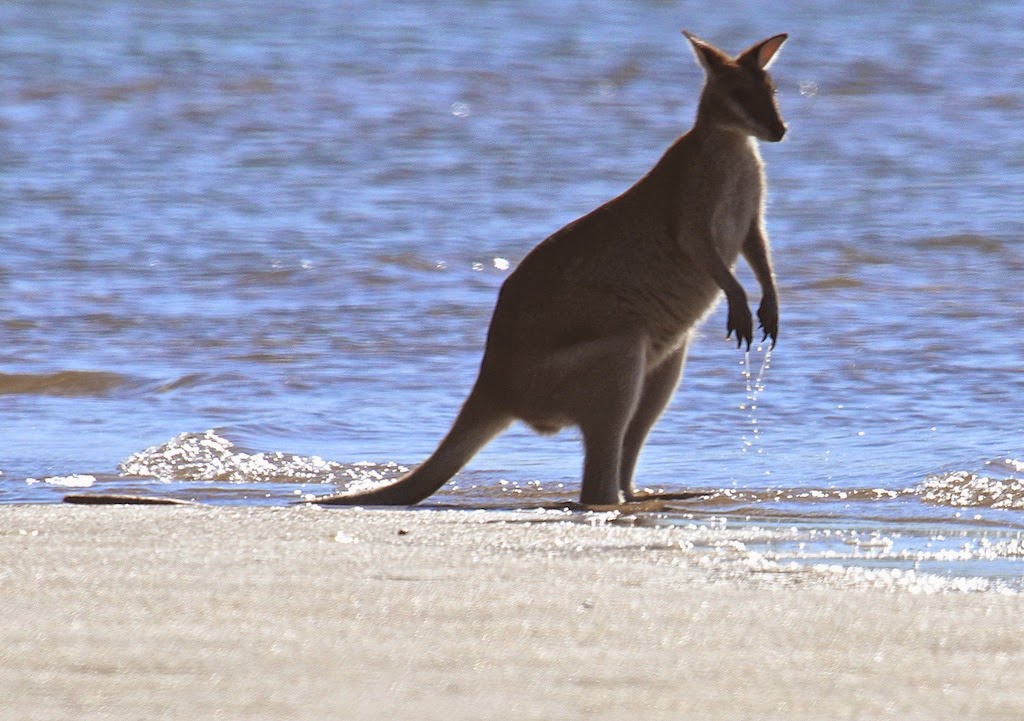 Wallaby put his front paws into the water then stood up and shook the water off his paws.

He quickly decided he did not like the water and in one movement he turned and hopped away from the water and back into the mangroves.

Agile wallabies go down to the river in the early morning to drink but I have never before seen one on the beach in the middle of the day. 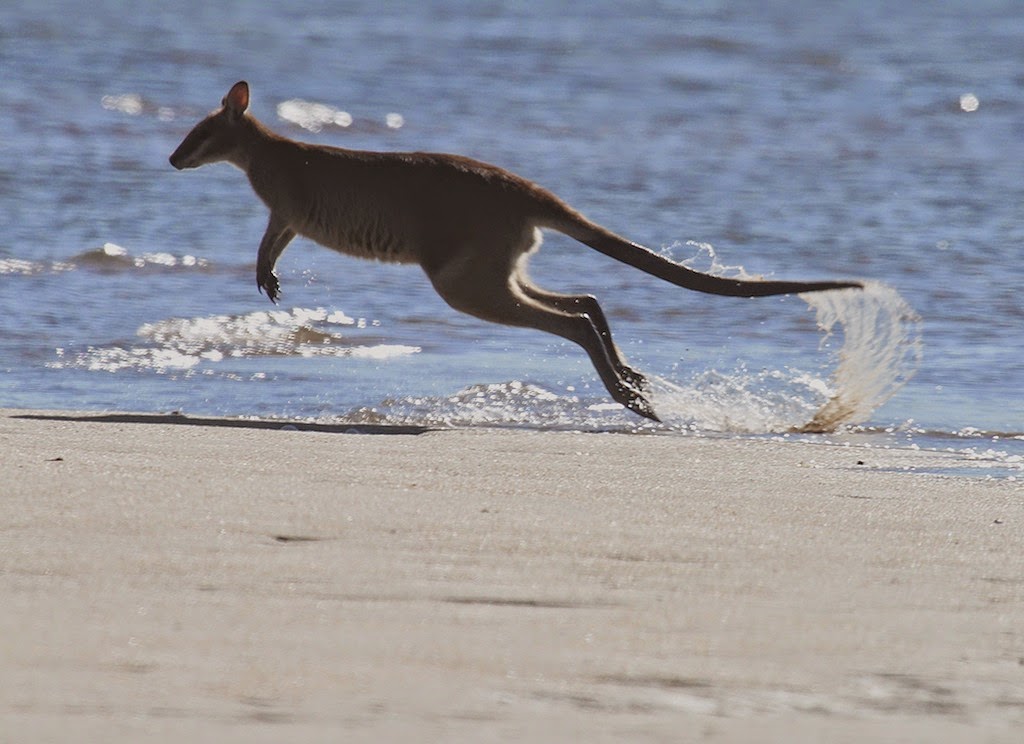 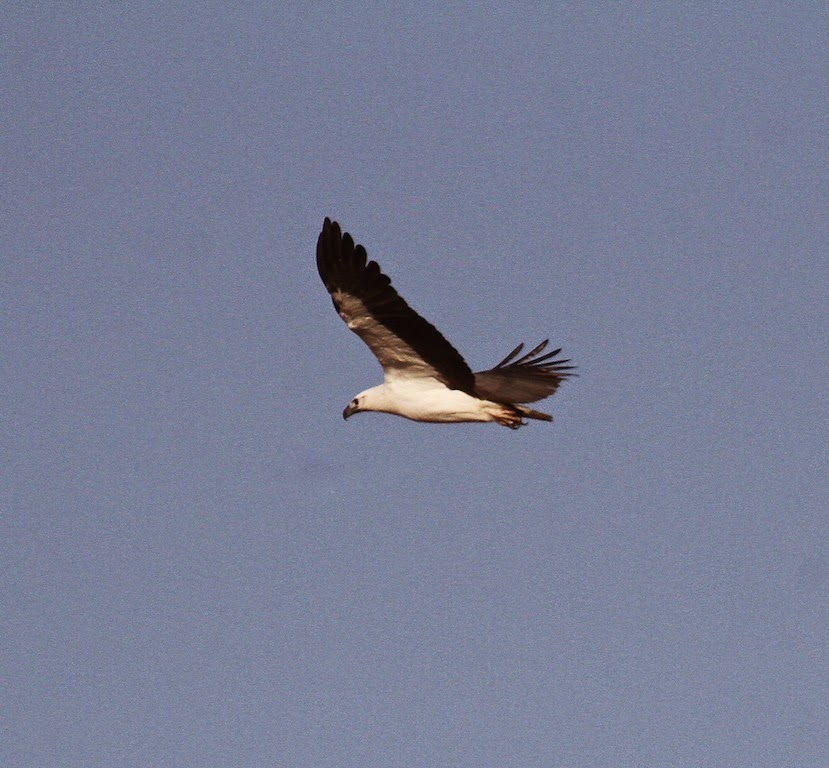 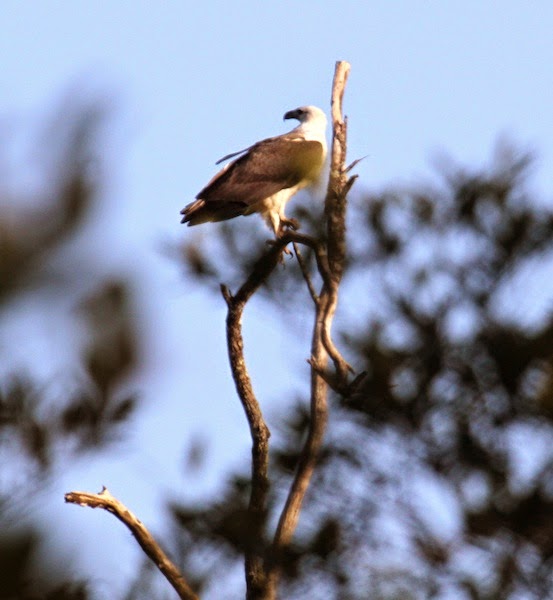 On a dead tree overlooking the mangroves white breasted sea eagle rests between flights while keeping a lookout for any movement in the waters of the mangrove lagoon wetlands of Coquette Point.

At the edge of the mangroves white face heron stalked for crabs. 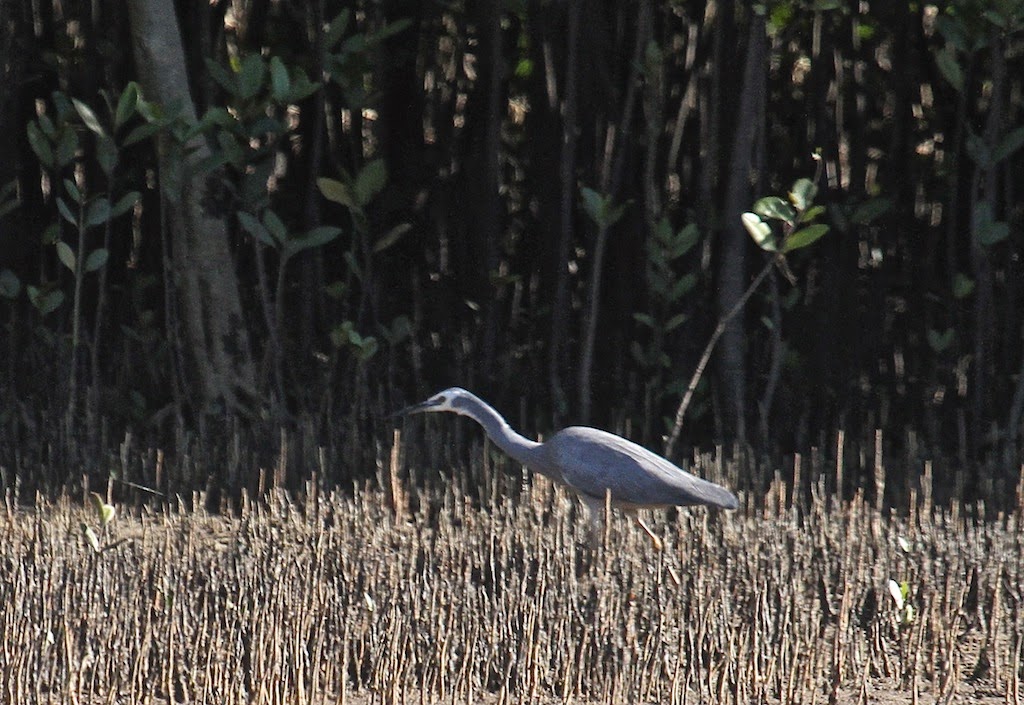 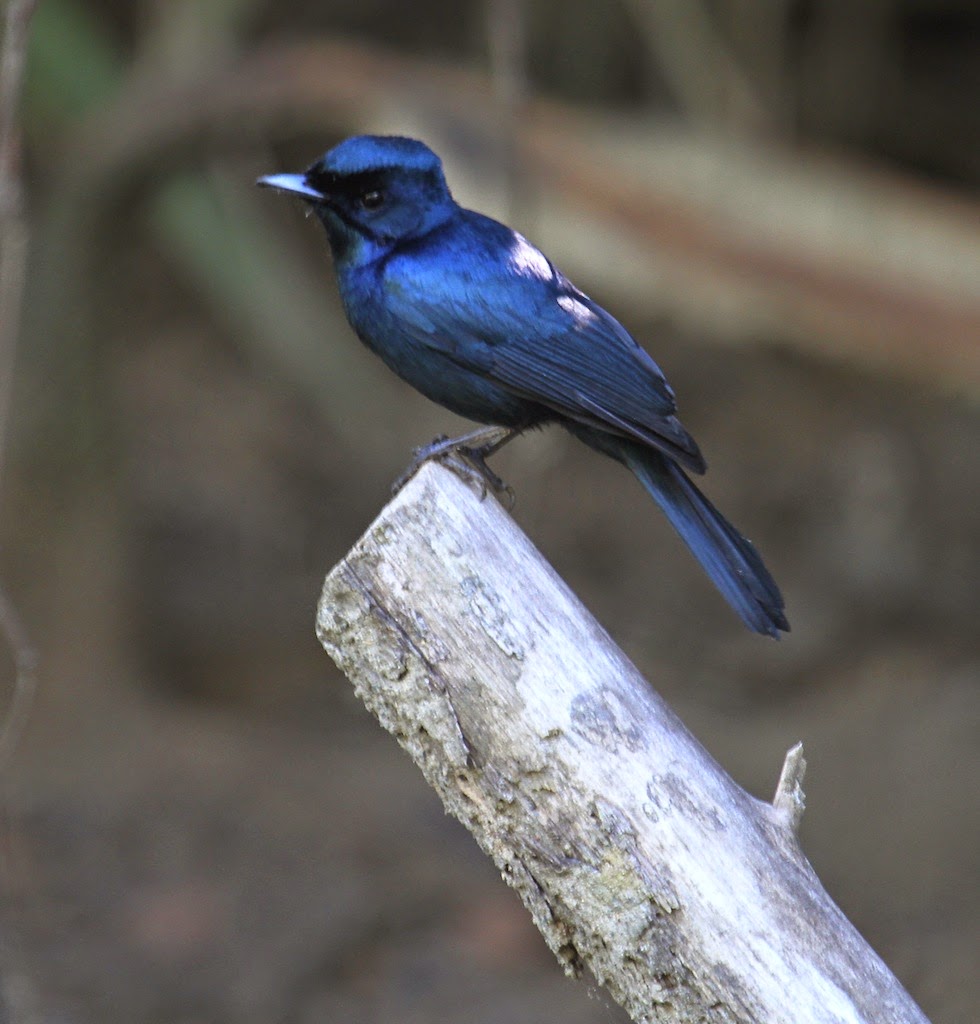 Feeding in the mud around the mangroves I heard shining flycatcher repeatedely calling with his rough, scolding croak. 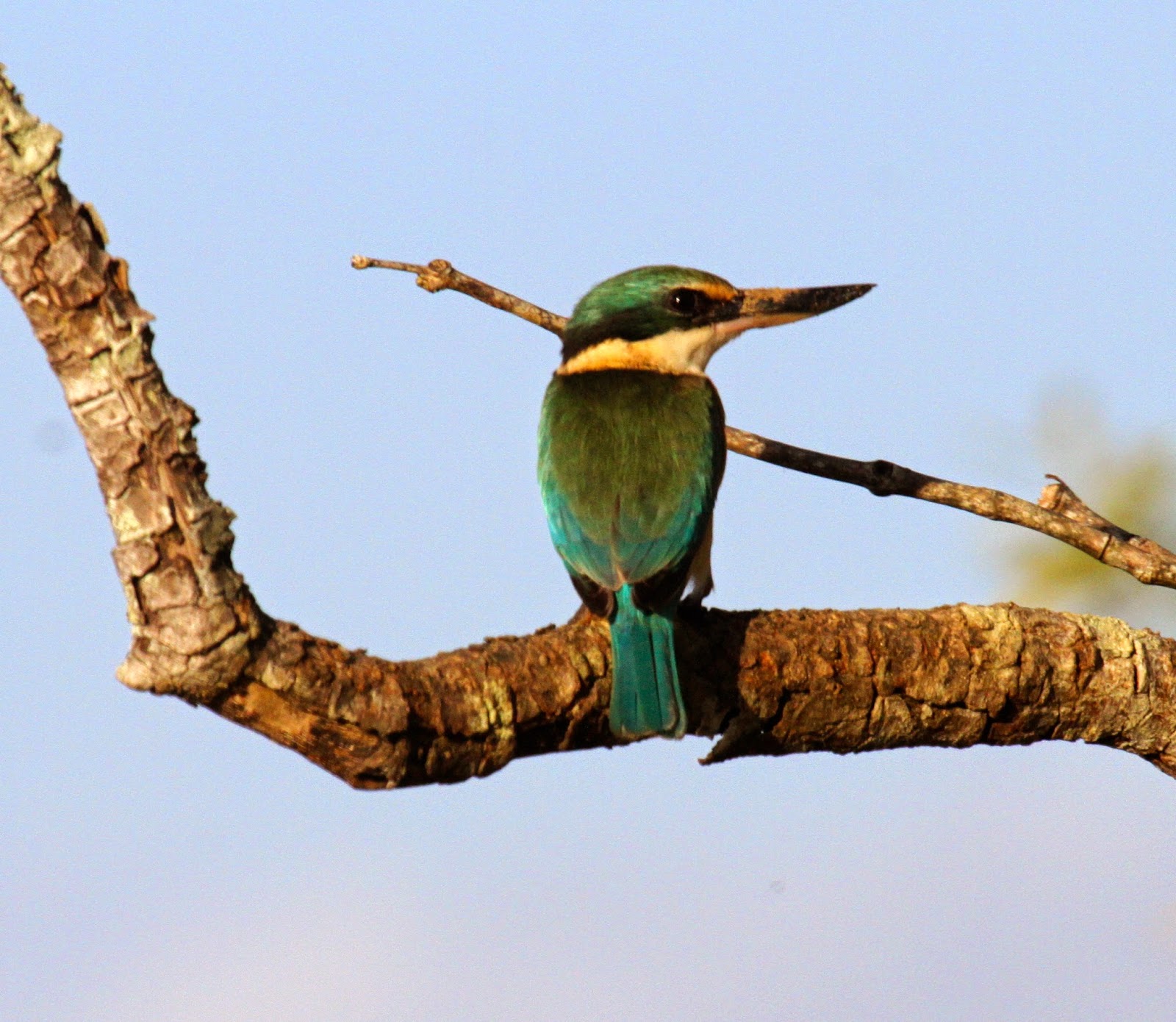 A sudden flash of turquoise and I saw two sacred kingfishers land in a mangrove tree. Sacred kingfishers are solitary except when breeding. They normally winter in the north and return south in the spring to breed. These two are obviously a pair and I have seen them together for some weeks now. I noticed a freshly dug nest in a nearby termite mound so perhaps they will breed here.

Keeping a watch on this nest in the mangroves will not be easy with mosquitoes and sandflies at higher than normal number for this time of the year. 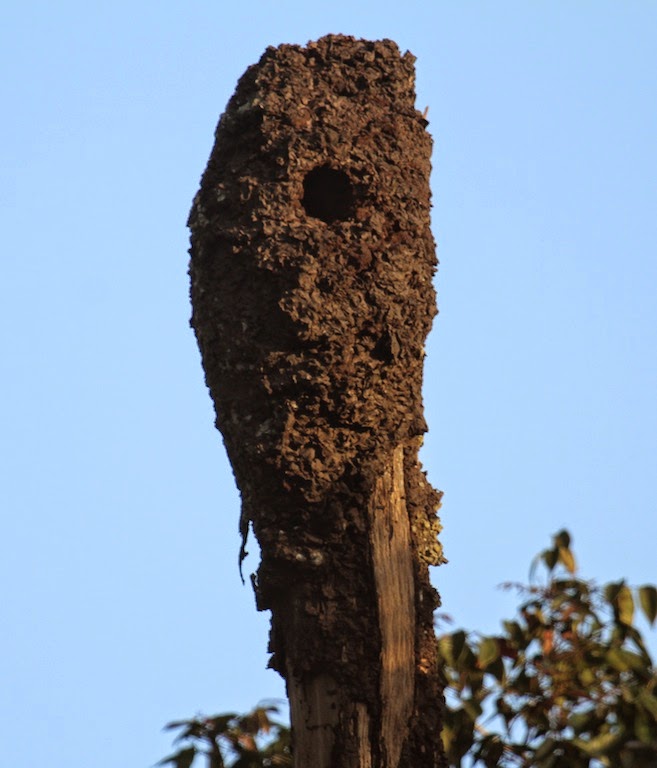 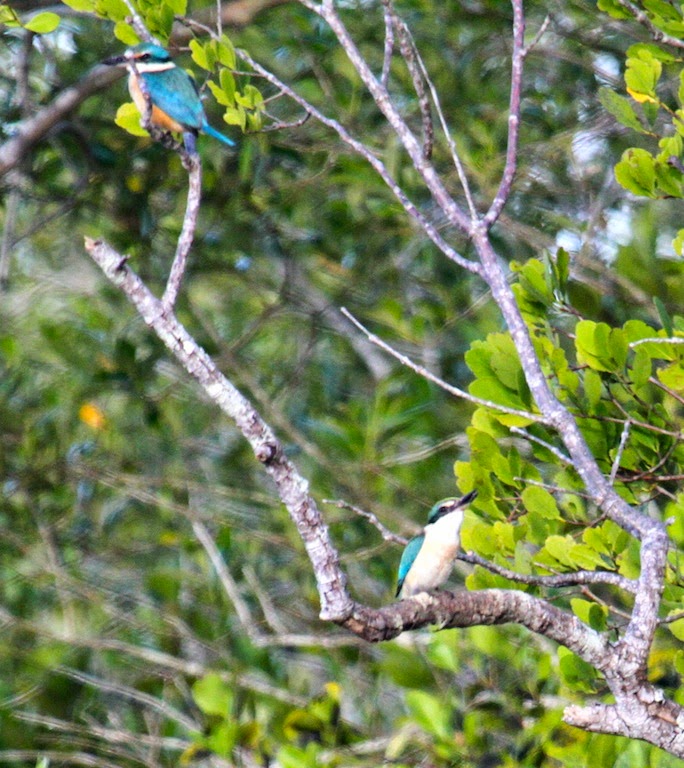 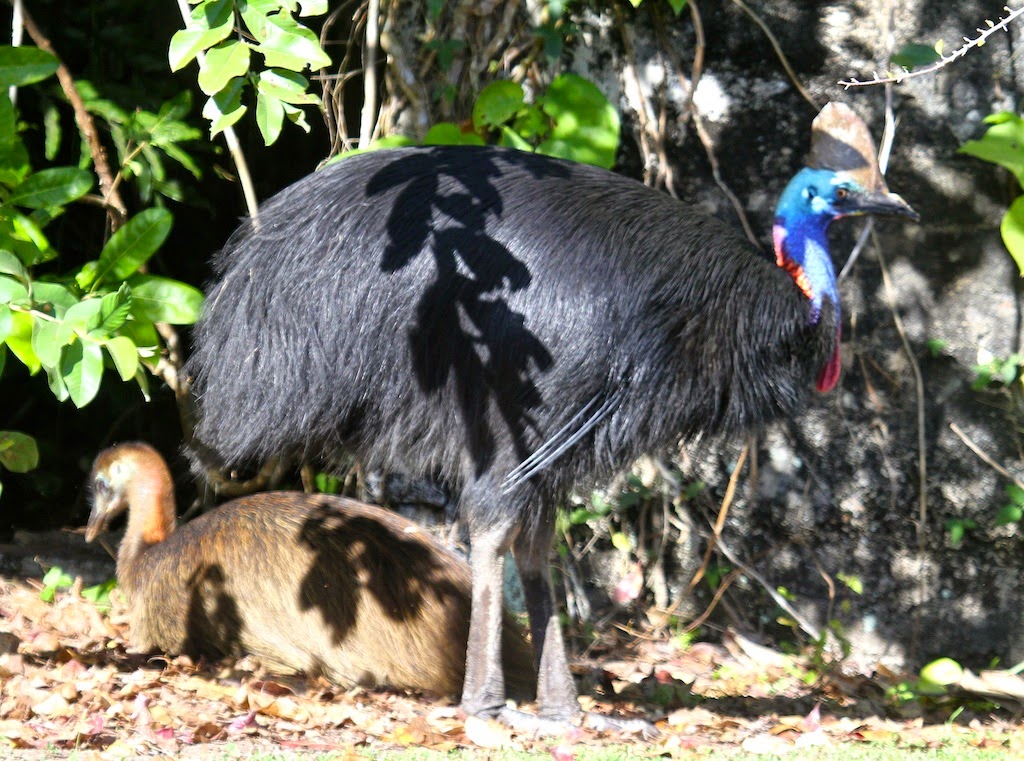 Cassowary Queenie has given up on her pursuit of Snout and I haven't seen her for ten days. Ruth saw Jessie once this week as she darted down into the mangroves and Don and his chick also paid Ruth a visit.

I see Snout every few days as he hangs around waiting for the fig birds and starlings to knock Alexandra palm seeds to the ground. It appears for every one fruit the fig birds eat they knock two to the ground for the cassowaries.

If you look carefully you will find five birds in the photo below. 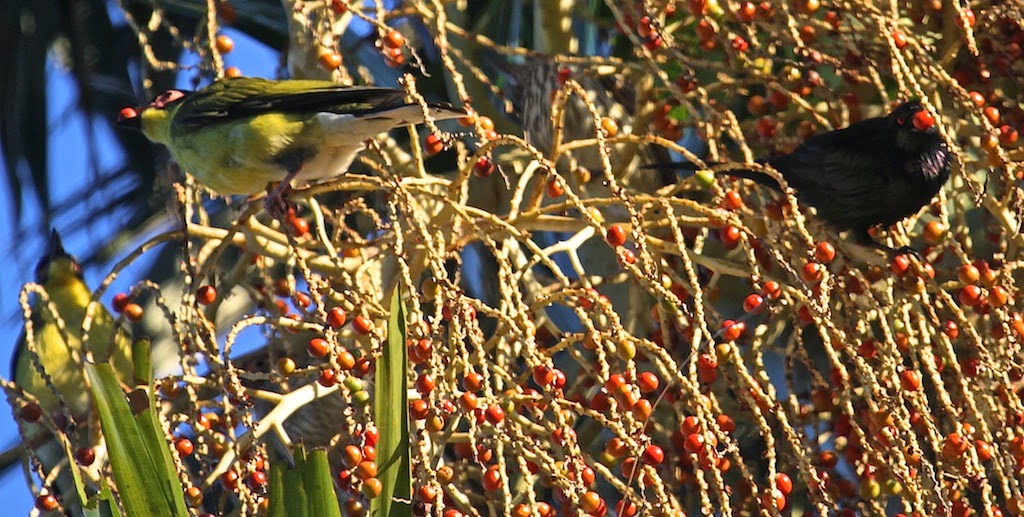 Steve from Boutique Bungalows at Mission Beach was enjoying a stroll along Perry Harvey Jetty this week when he saw a small green sea turtle in distress. The turtle was being washed against the wharf pylons and could not seem to swim away. It was late in the afternoon but with the help of a tourist, Steve jumped in the water and rescued the turtle. He contacted the Mandubarra Turtle Rehibiliation Centre here at Coquette Point then drove all the way here with the turtle. Meanwhile Henry, Nellie and Allan Epong prepared a new tank to house the turtle.

Nellie has named this little turtle Lately. Although he has not eaten any squid as yet he did munch on some cos lettuce today. Well done Steve and great work Mandubarra in caring for another turtle. 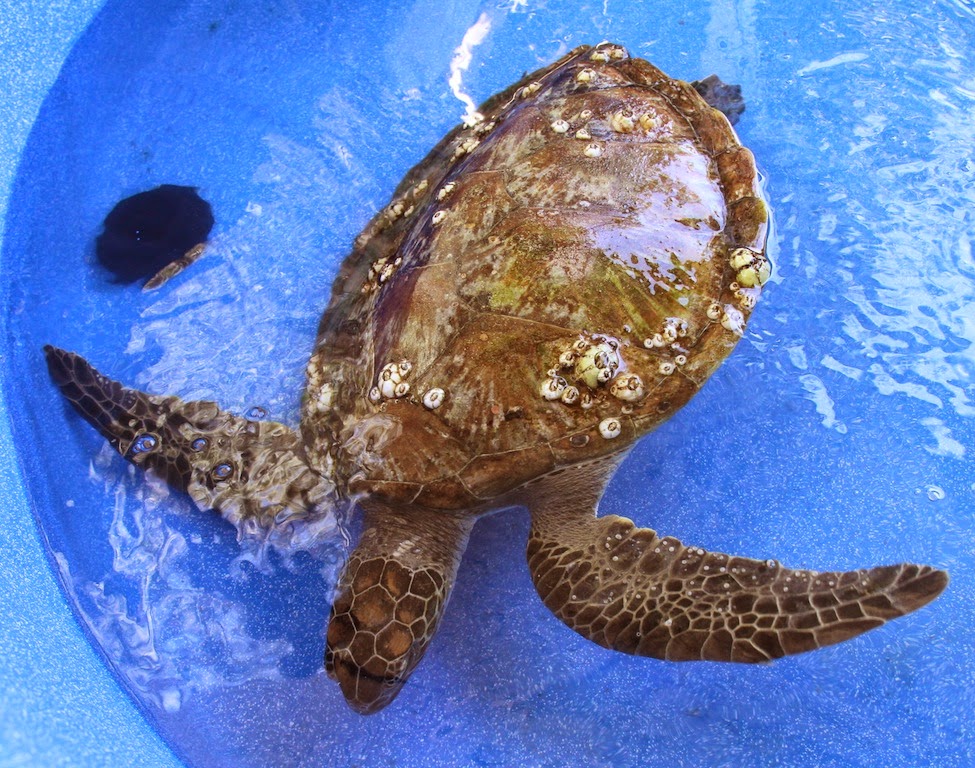 Lately swam lopsided in the tank. He is covered in barnacles and when Nellie examined him she found a small crack in his shell. 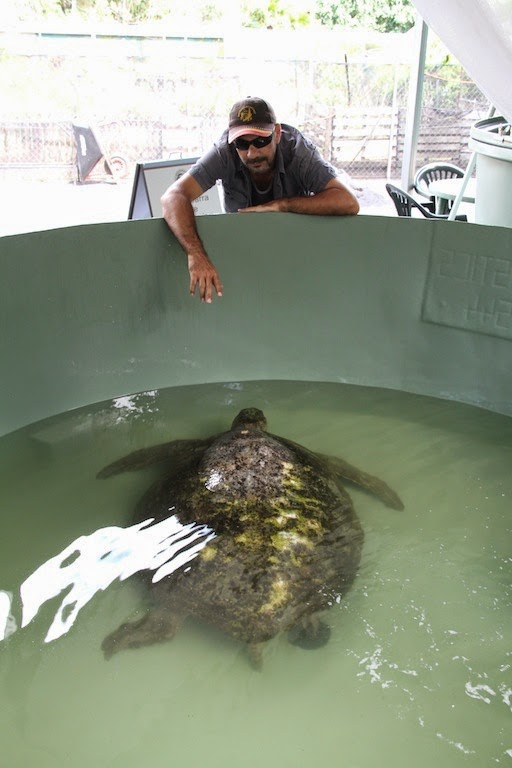 Cindy-lou is still at the Mandubarra Turtle Rehabilitation Centre and is eating large amounts of squid on most days.

She recognises Alan and will always eat more when he feeds her. 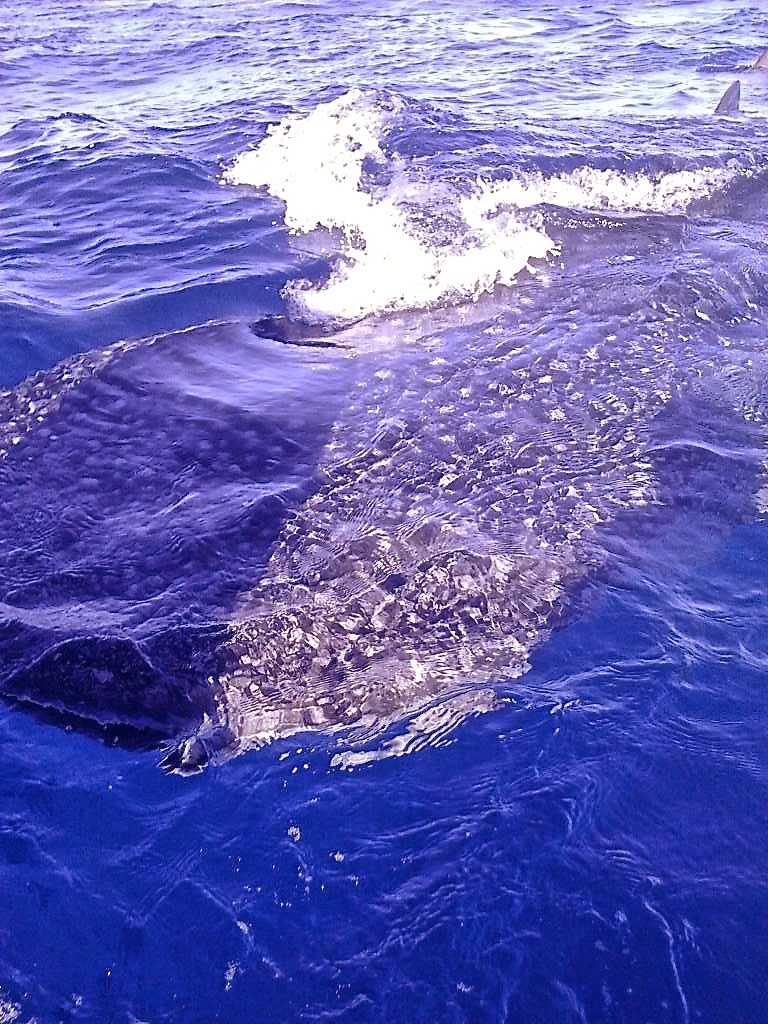 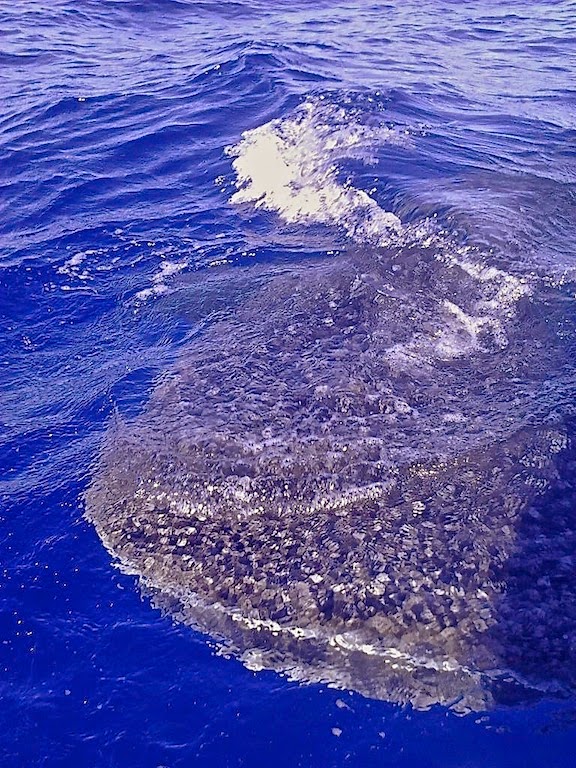 A build up of stratocumulus cloud on Friday afternoon created a wonderful show of crepuscular rays over the Johnstone River Valley as the sun set. 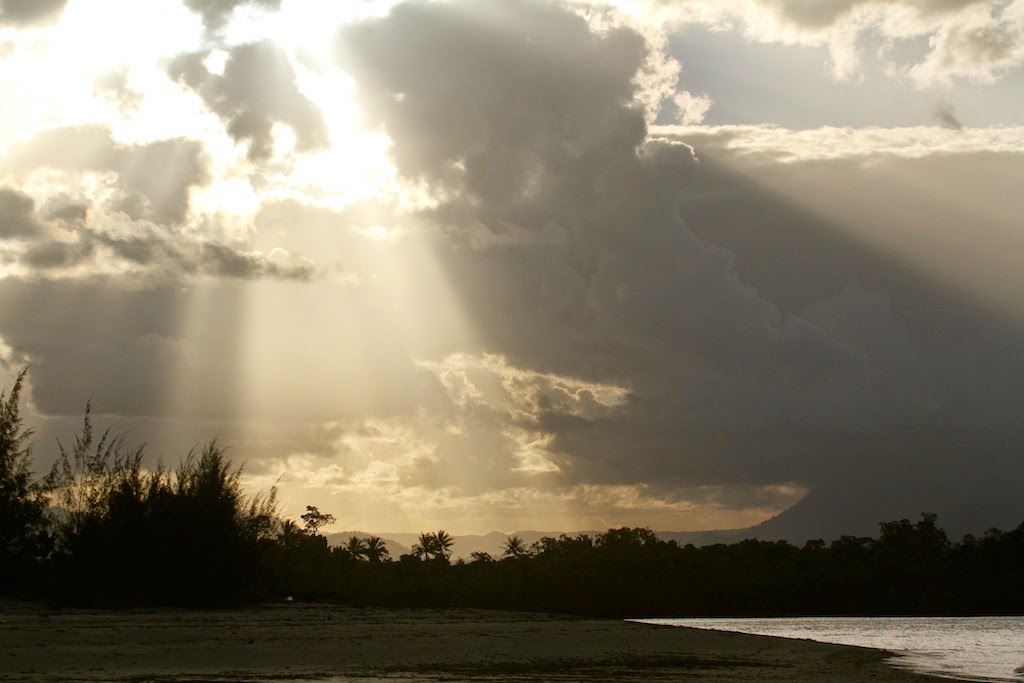 Cheers for this week,
Yvonne
Posted by Unknown at 02:33