A pea-souper of a fog rolled down the Johnstone River at sunrise this morning. Just before it covered fisherman Ross he hooked onto something big. 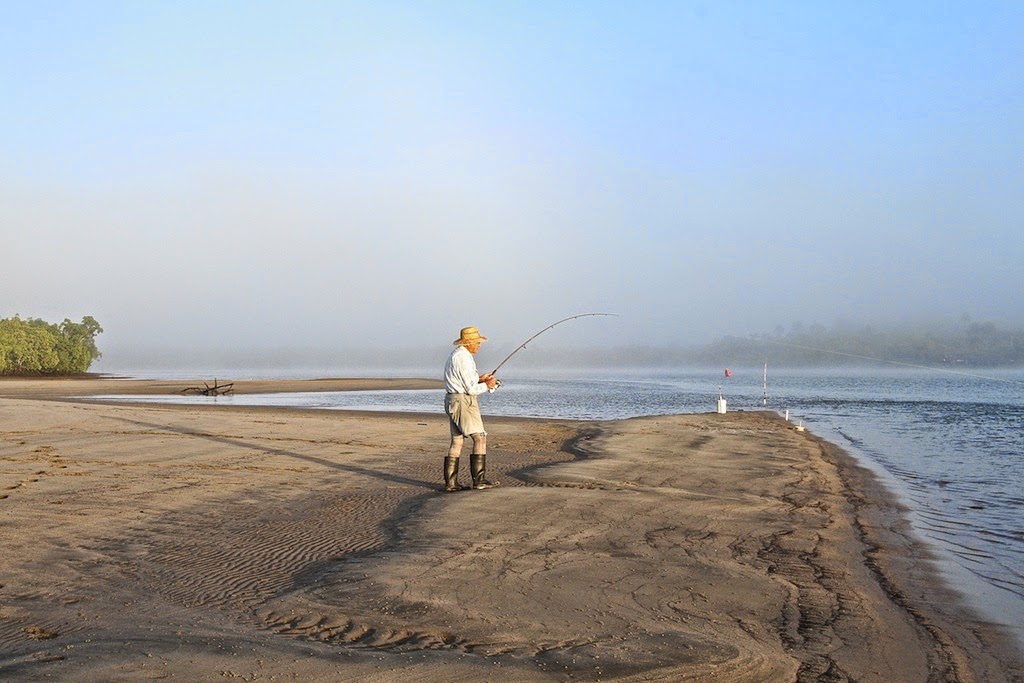 I made it around to the ocean front before the fog engulfed me. 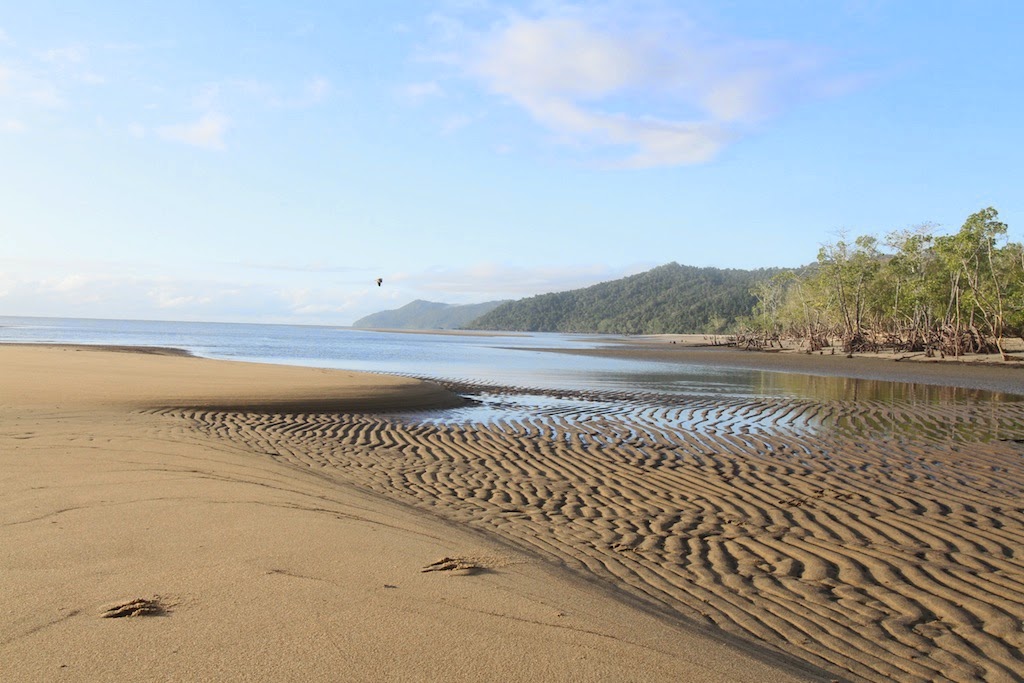 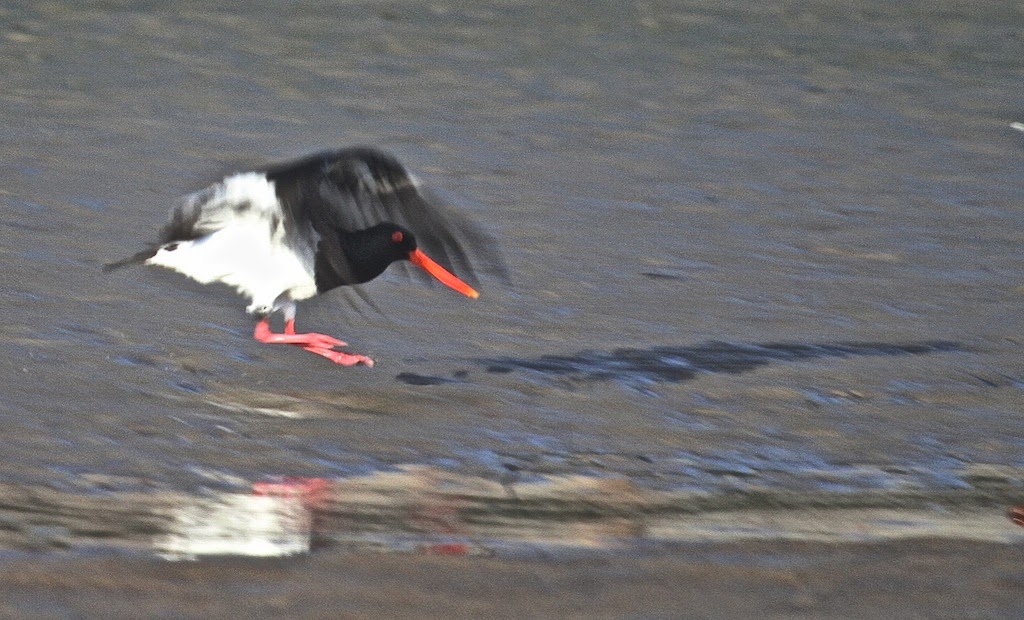 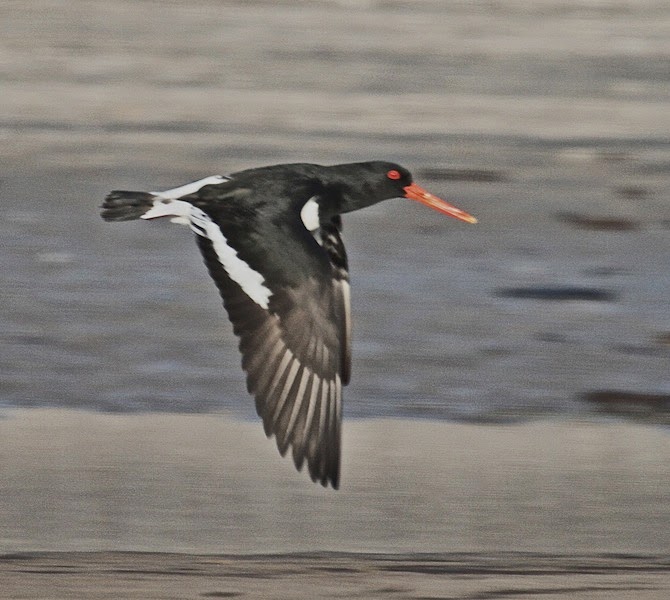 Pied oyster-catchers were setting up for a day's fishing and I just managed to find little red-capped plover before the fog descended on him. 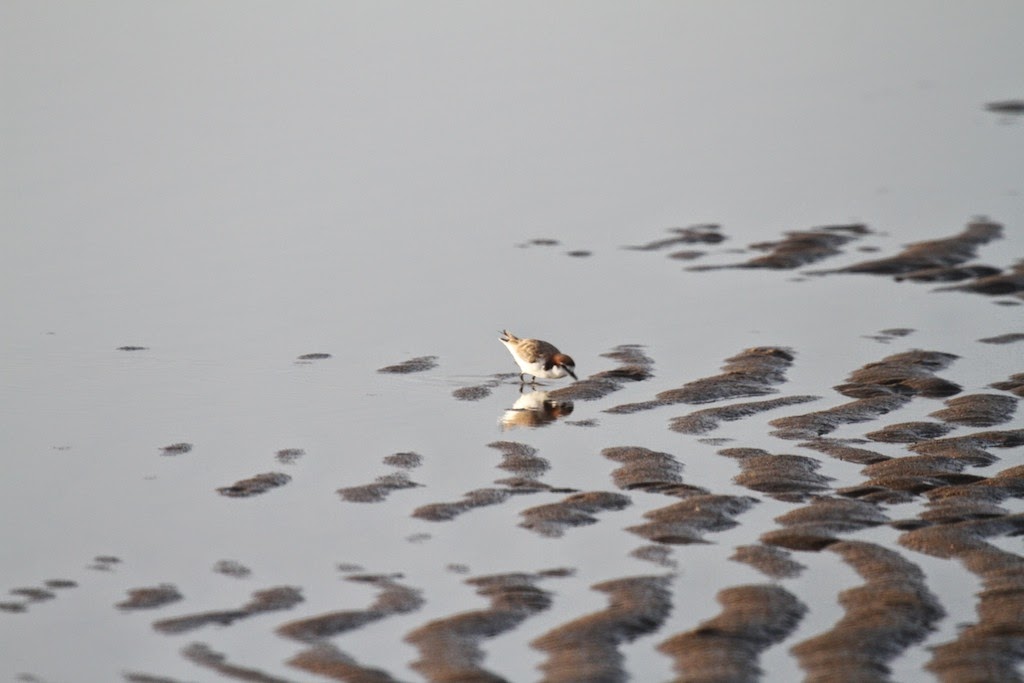 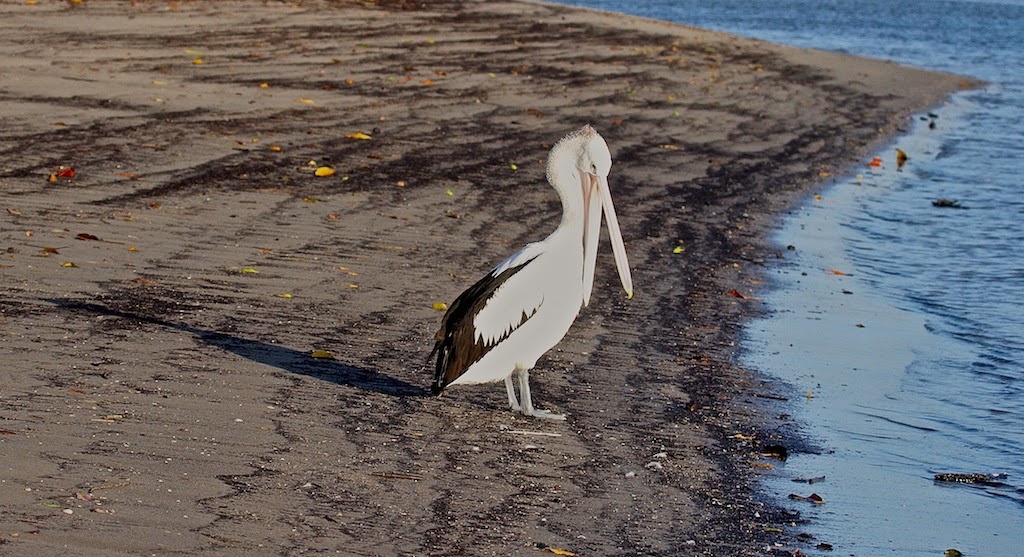 The fog burnt off very quickly and was gone. When I returned from my walk pelican had woken from his nights sleep on the dune and was busy tending to his winter down feathers sending them flying all around on the sand.

Cassowary chick Ky has been enjoying the warm dry weather and when I heard some strange noises coming from the edge of the rainforest I saw it was Ky jumping and playing amongst the leaves exuberant in the joy of early spring weather; he is such a happy little cassowary. 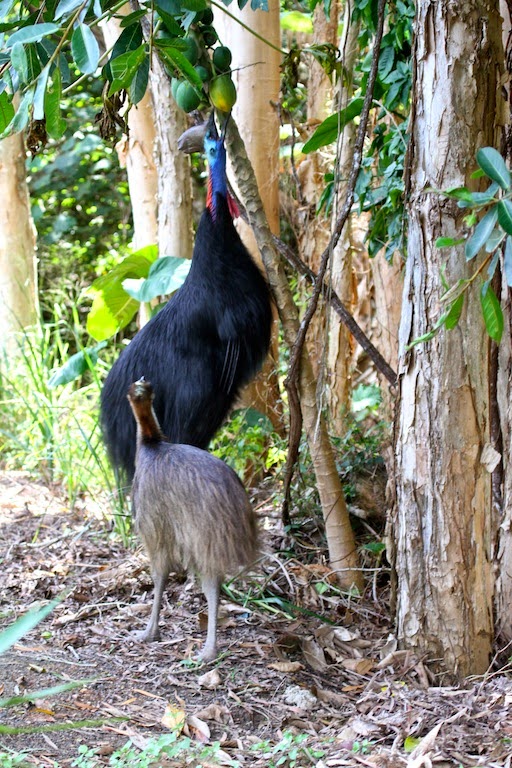 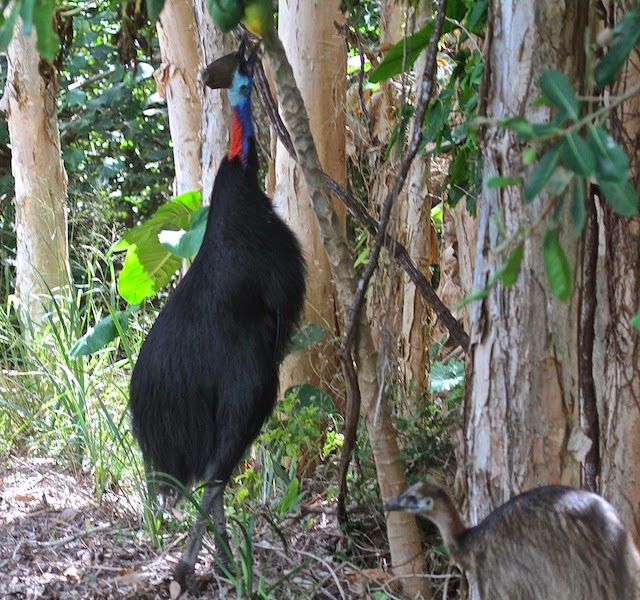 On Friday when I saw Snout and Ky heading for the melaleuca I decided to follow them to see what they were about. I had not noticed there was a pawpaw almost ripe near the swamp. Snout headed straight for it. He stretched as tall as he could but could not dislodge the pawpaw. With another stretch and his beak wide open he twisted the fruit and it fell to the ground.

Ky immediately took possession of the fruit while Snout watched. 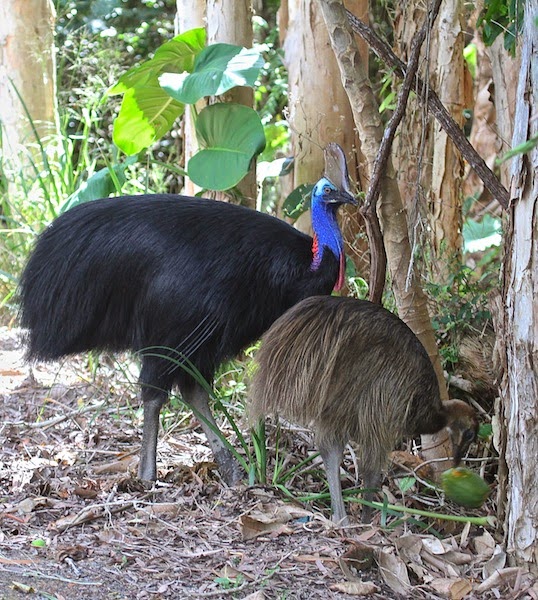 As hard as he tried Ky could not open the pawpaw.

Snout came to the rescue he picked the paw paw up with his beak shook it then dropped it. It broke open and they both demolished the fruit their beaks and necks entwining as they ate. 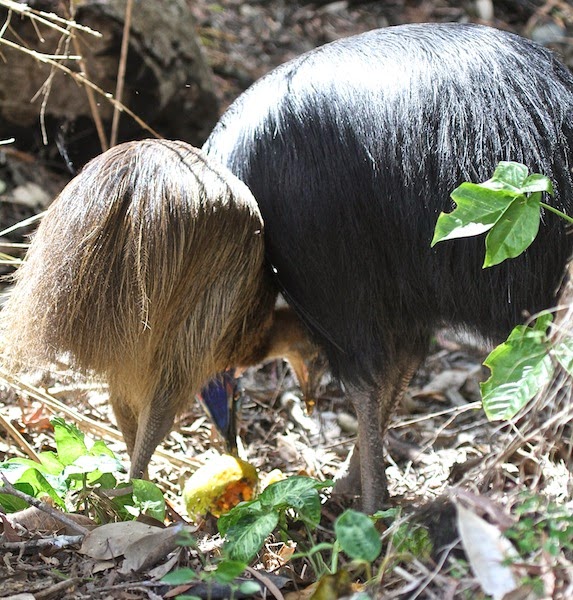 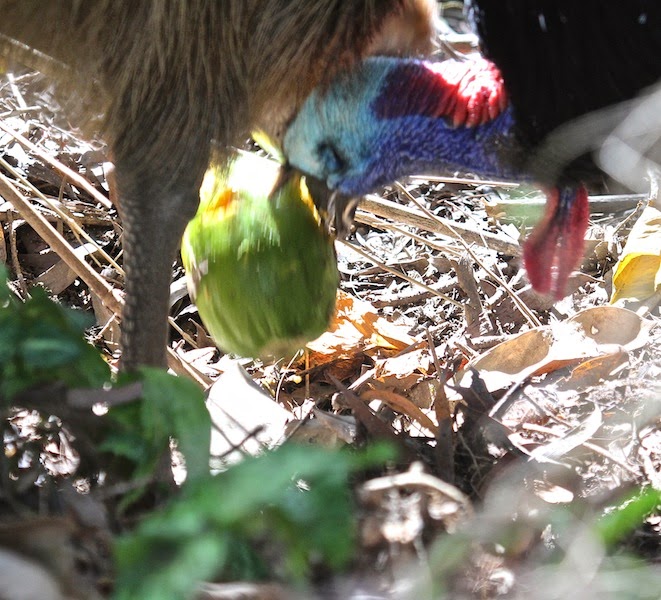 Snout is still demonstrating his role as a devoted father and not showing any sign that he may soon be parting from his chick Ky. 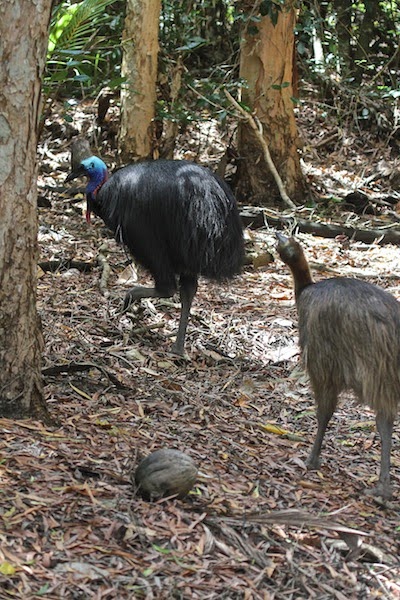 When they finished the pawpaw they moved through the swamp and headed down into the mangroves. I watched as Ky looked up into the canopy as if searching for another pawpaw fruit.

I have not seen matriarch cassowary Jessie down at the Point, however, Ruth has spotted her several times this week at the top of the Moresby Range and Jessie seems to be hanging around the male Hero. No sign of courtship as yet, it seems the girls are ready but the boys have other things on their mind.

Pam B spotter a cassowary no one seems to have seen before. It was an old male, rather small, and his casque has been broken with two large V shapes missing from it. Unfortunately Pam did not get a photograph. I spoke to Clara Mau and she does not recall ever having seen such a bird. Perhaps we will never know the population of the Moresby Range Cassowaries but from the photograps I have it appears to be at least 50 birds. 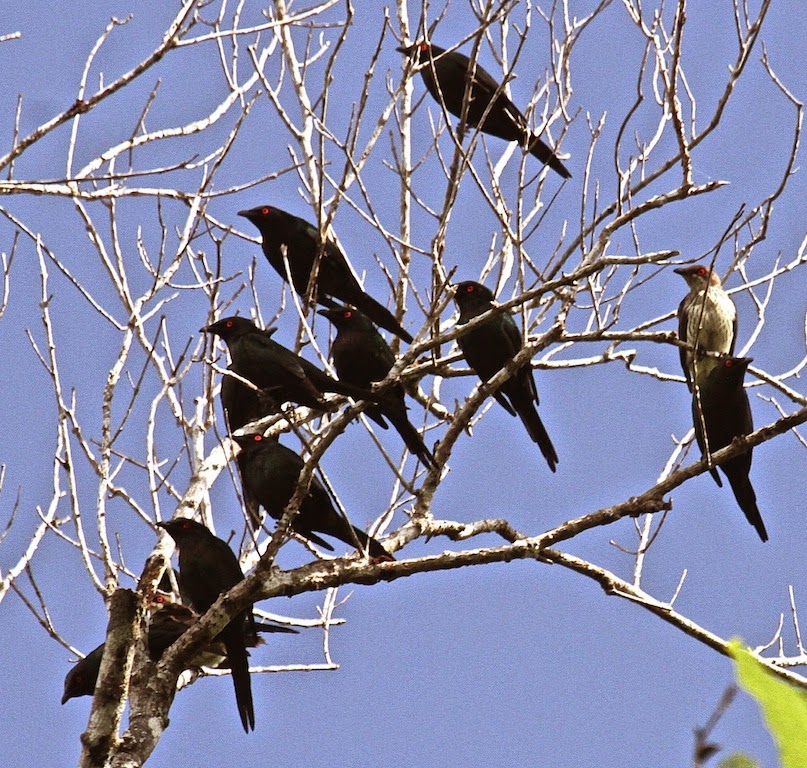 Greater numbers, than usual of metallic starlings have wintered-over this year and some still have their juvenile feathers. 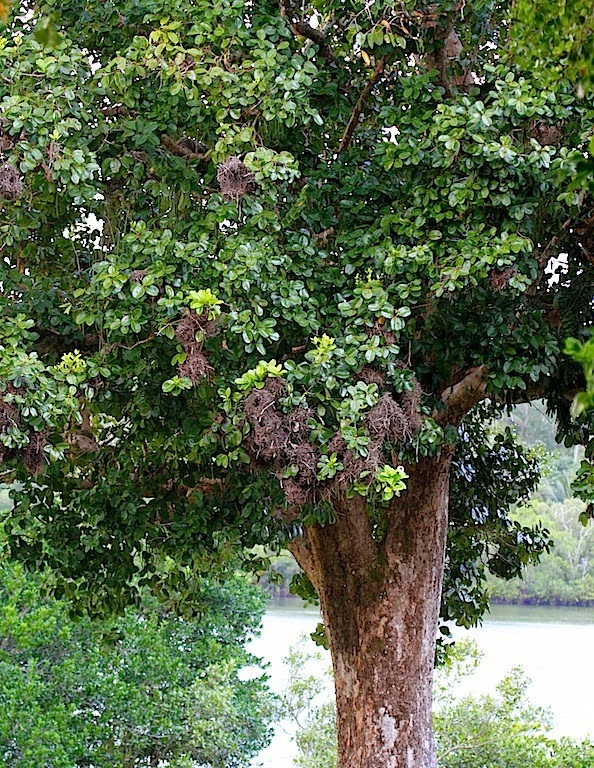 Of a morning they are the first birds out and about to find the best trees from which to catch the early morning sun.

The nests on the white-apple tree at the Coconuts are in disrepair and at night I found these winter-over birds asleep on a nearby power line and not in their nest tree. 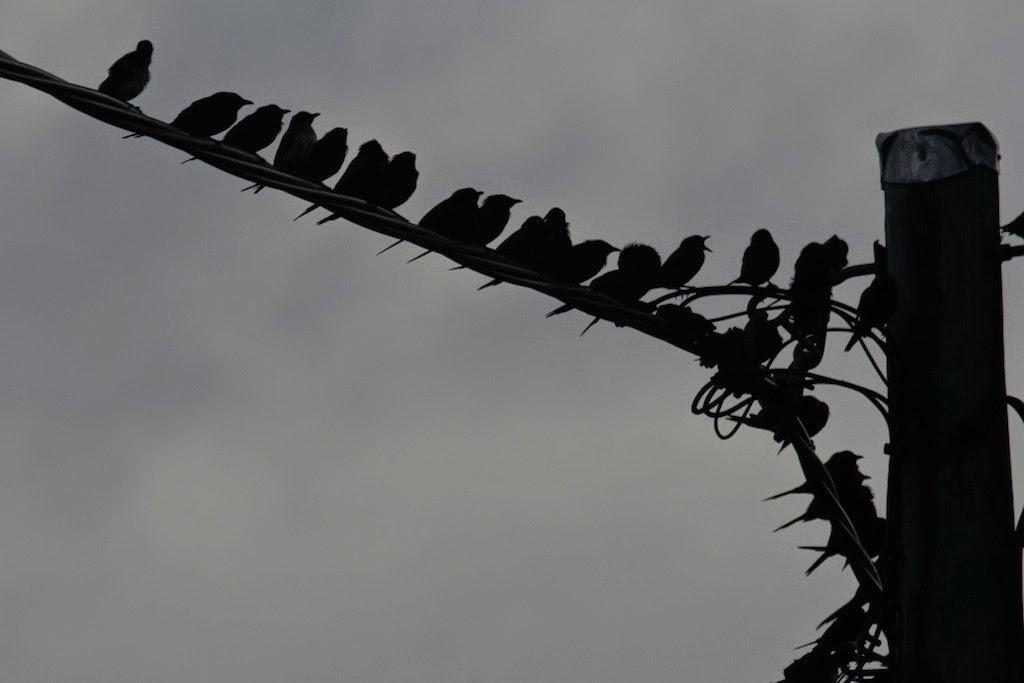 It won't be long before their migrating flock returns home from West Papua to join them. 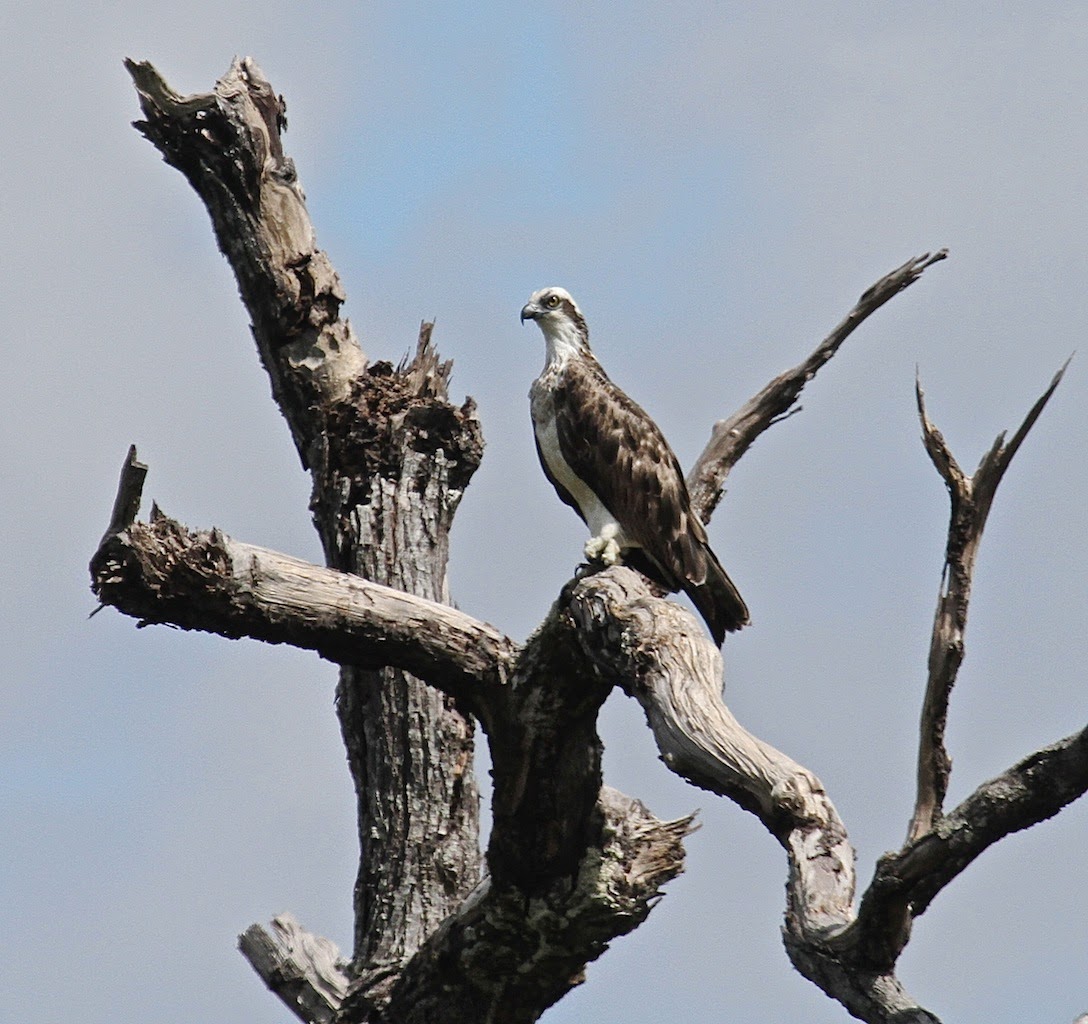 Osprey's giant nest from last year has fallen to the ground. He and his mate have been very active fishing and displaying over the Coquette Point Wetlands all this week. 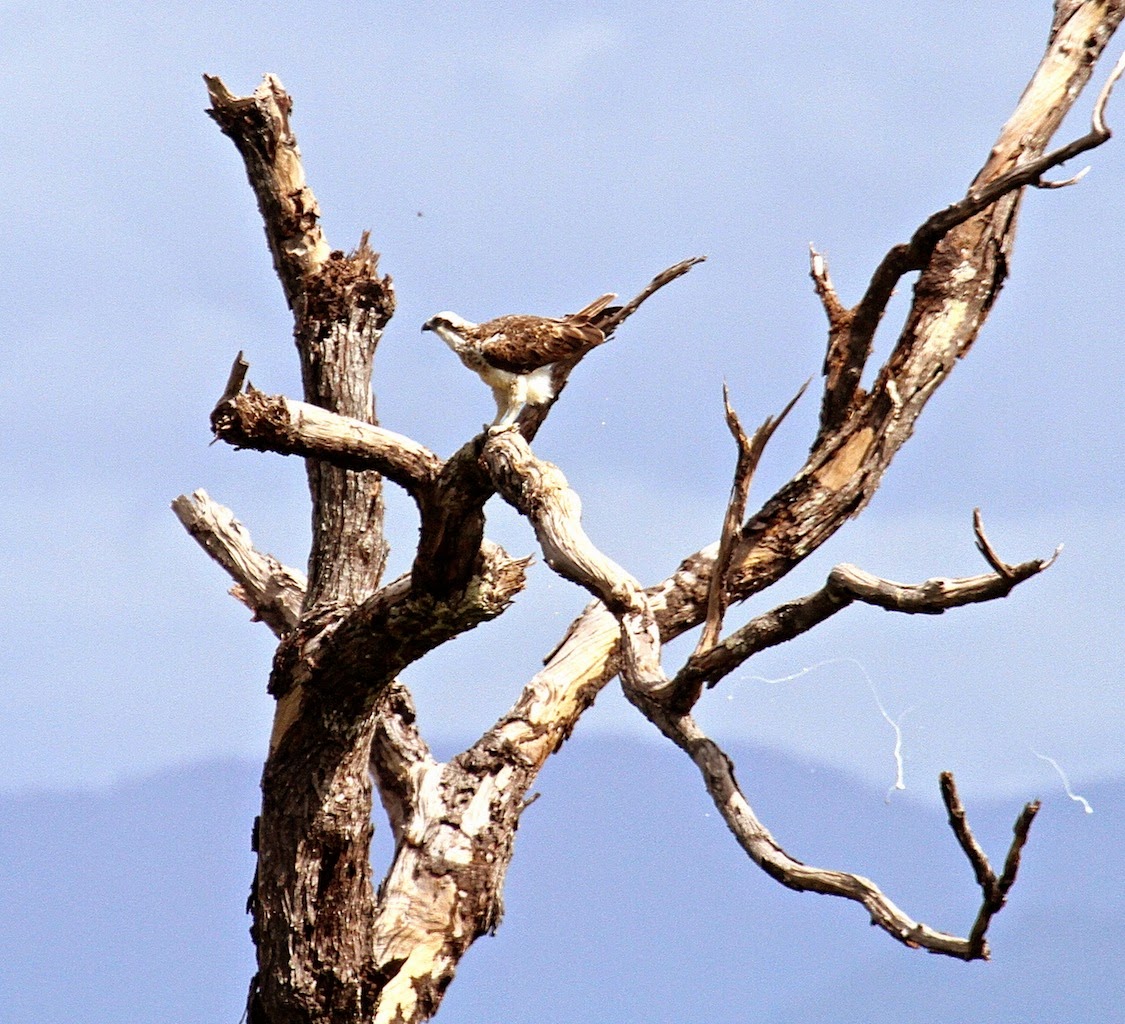 Osprey examined a tree as a possible nest site and as I watched, Osprey lifted up as if to fly and I was amazed to see him projectile excrete and thought I was lucky not to be right under the tree, as I was in the photo below.

Lets hope when they decide on their new nest site it will be in a place that is easy to photograph. 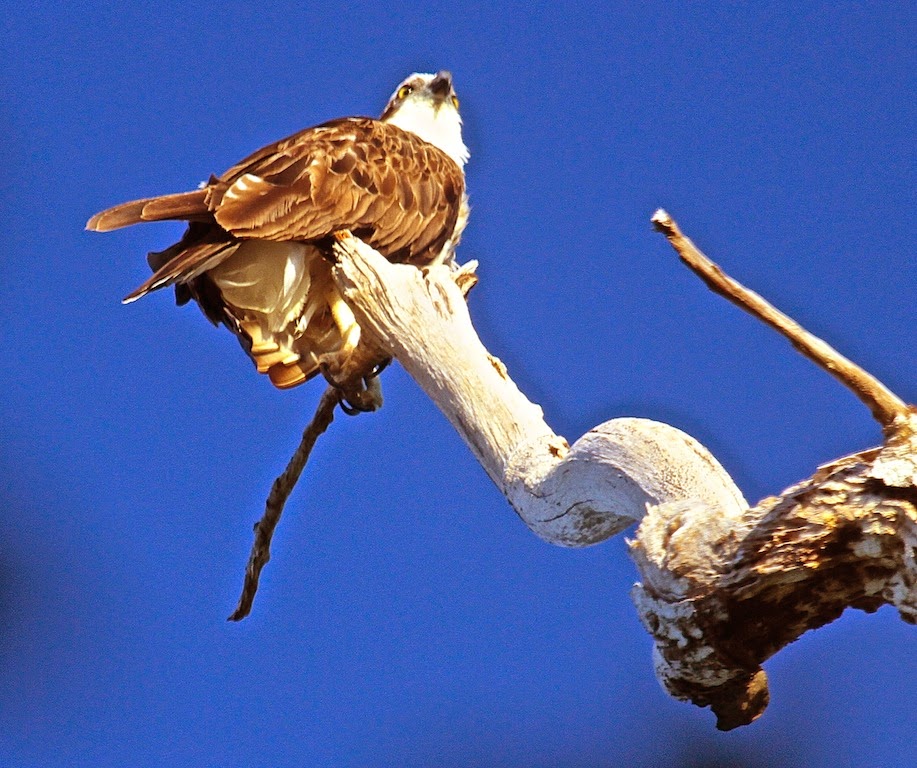 Crested hawks have also been very excited in the warm dry weather. Two birds have been actively hunting and playing in the treetops around the nursery. 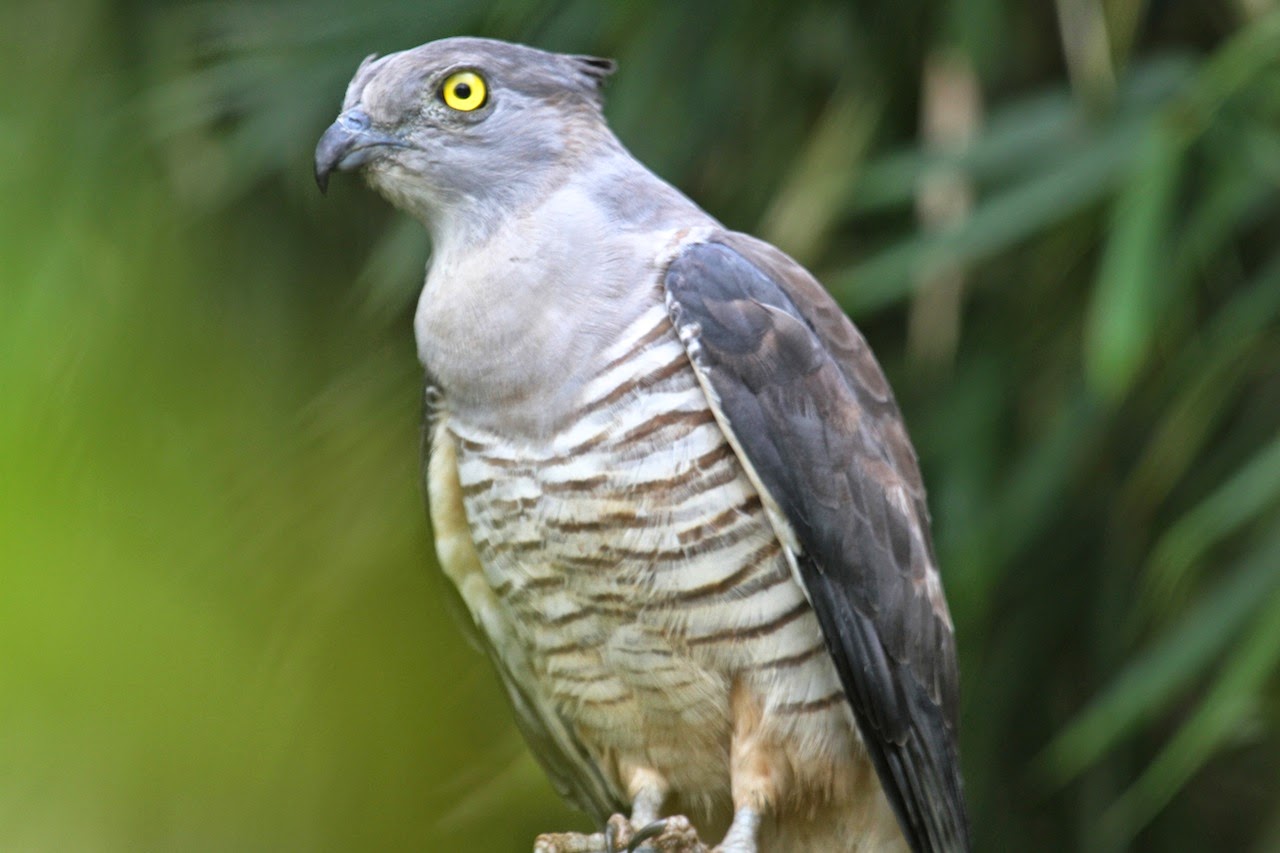 While Brahminy Kite has taken to the day time skies and has been hunting along the banks of the Johnstone River. 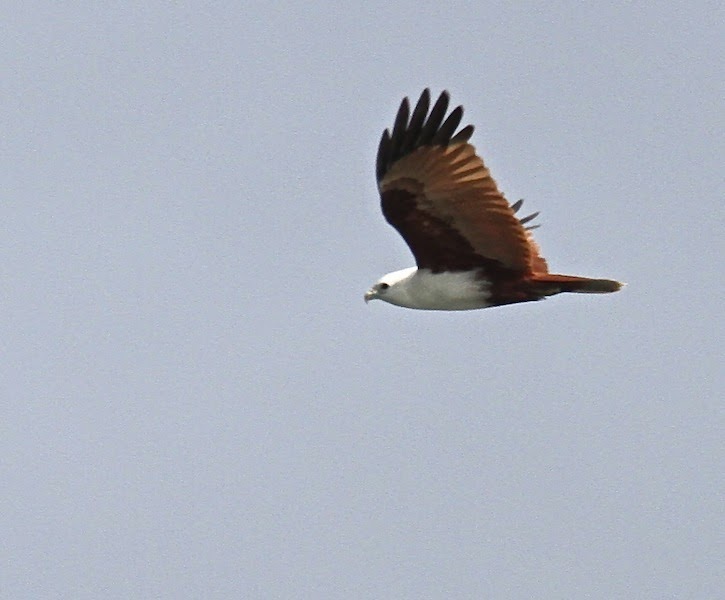 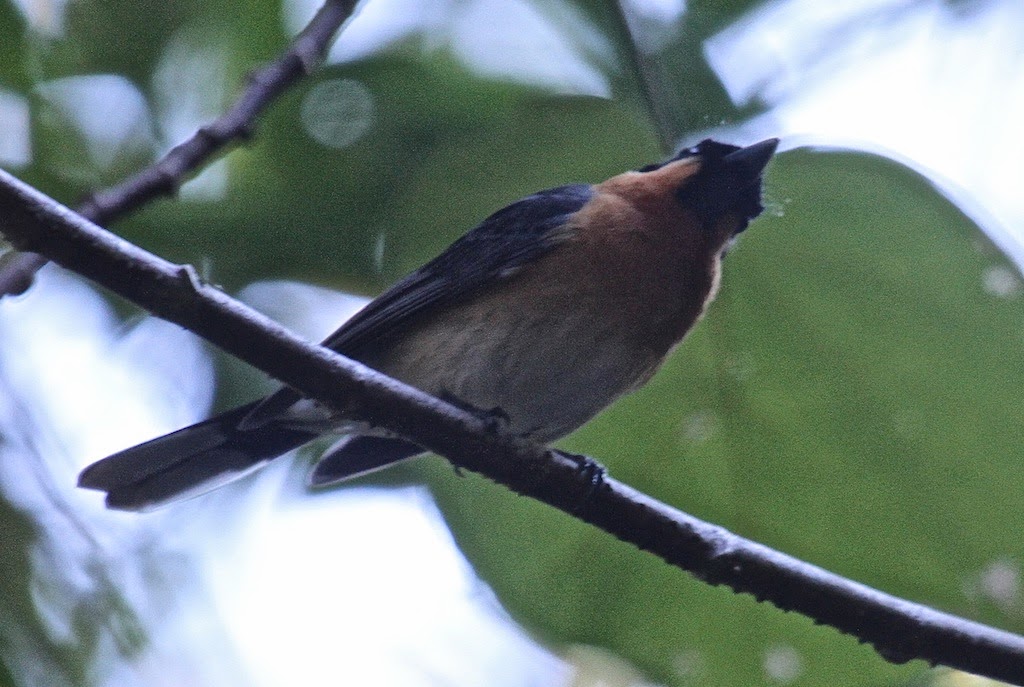 In the canopy of the mangroves spectacled
monarch's harsh buzzing call gives away his presence. Turning one way then the next his 'whiskers', rictal bristles, quivering to sense any motion in the canopy. Never staying still for more than a few moments, this beautiful bird is a master hunter. 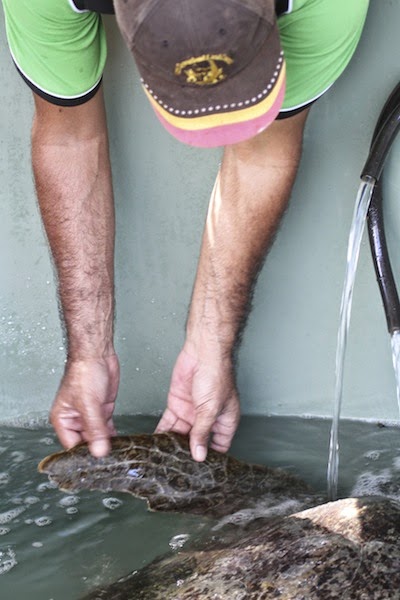 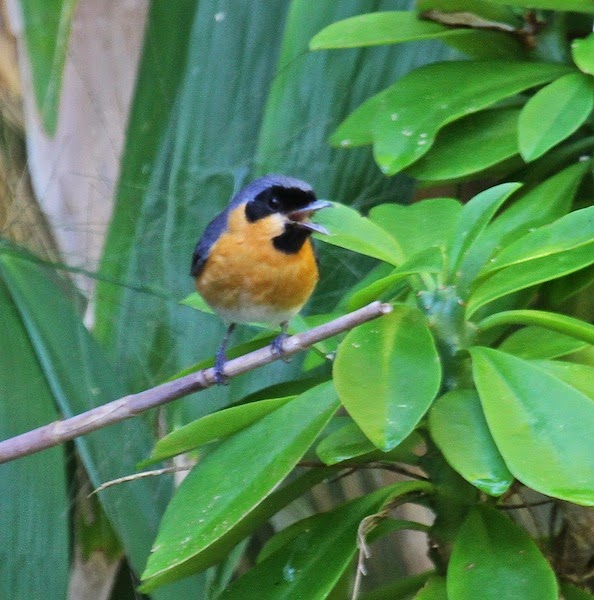 Although male and female spectacled monarch have similar markings and colours the male's colours are brighter. These little birds migrate within the region and while they tend to winter on the coast most move to the Atherton Tablelands in summer. 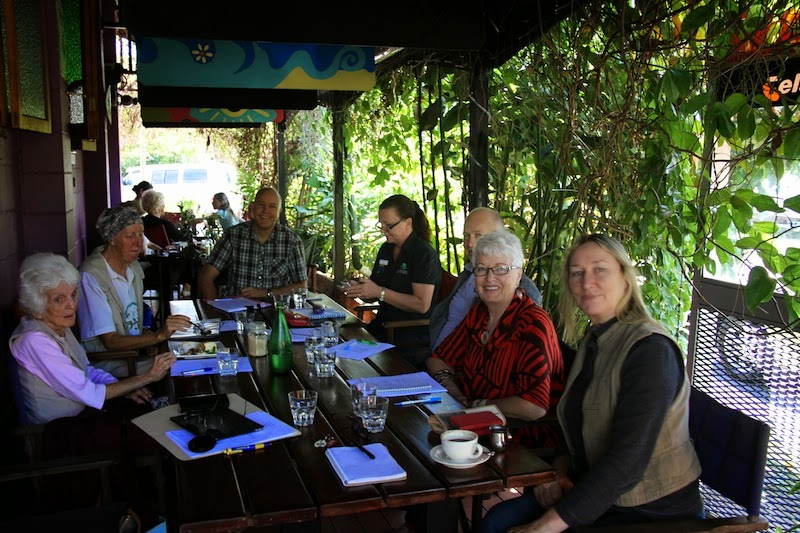 A momentous évent on Tuesday with the
lease signed, between the Friends of Ninney Rise and Queensland Parks and Wildlife Service, for the Ninney Rise Estate. You can read about Ninndy Rise and how you can help at: www.ninneyrise.com 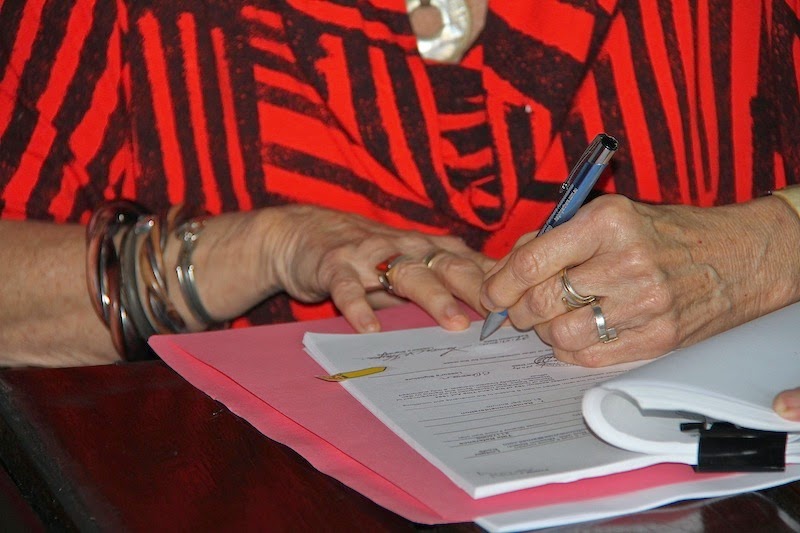 It was thrilling that Margaret Thorsborne and Suzie Smith, who have both been ill lately, were able to attend the meeting which was held on the verandah of the Bingil Bay Cafe on Tuesday 29 July.

Sandal Hayes signed the lease on behalf of Friends of Ninney Rise with Craig Dean, centre table, Senior Conservation Officer from Queensland Parks and Wildlife Service. FoNR is now responsible for the day to day management of the Ninney Rise Estate.


Cheers for this week,