While cyclone Dylan proved to be a fizzer its effects on the King Tides that coincided with Dillon's track down the east coastline of Queensland did create an impact. However, it is what we have done and are still doing to the dune vegetation behind the beaches that has allowed the full force of wind and tide to cause devastating erosion. The foreshore is no place for development particularly housing.

It is ironic that the people who scream the loudest about erosion are often the people who have cut down the trees so they can see the sea.  The supreme irony is that we all have to pay for their foolishness.

The Cassowary Coast Council is fighting a losing battle in trying to stop erosion at Flying Fish Point.
If cyclone Dillon had crossed the coast at high tide in this region the waterfront at Flying Fish Point would be in the front yards of the houses behind the road or worse.
The New South Wales Government has given up trying to stop the Ocean and has adopted a policy of 'retreat'. The policy even requires home owners to remove the debris of their homes after the sea takes it. Global warming and sea-rise is a reality, we the people are all starting to see; even if the Abbott Government does not.

As I sat sipping breakfast coffee in the Flying Fish Point cafe/restaurant, great little place, I watched three coal loaders, on the horizon, sail past within the GBRMP.  (I didn't get the third one in the frame it was too far to the south.) Soon however, there will be an endless line of bulk loaders steaming up and down the passage within the Great Barrier Reef Lagoon.
Yesterday The Abbott Government approved a permit to dump three million tonnes of dredge spoil inside the Great Barrier Reef World Heritage Area, with the planned expansion of the Abbott Point Coal Port Facility.  Colin McKenzie the president of the Association of Marine Park Tour Operators said in a radio interview on Fairfax Radio that his group were looking at every angle to take legal action to stop the dumping of dredge spoil in the GBRWHA.

Fisherman are also very upset and I asked my fisherman son Martin how he felt about the decision.
Martin told me he was very disappointed in the decision to dump dredge spoil in the the GBRWHA, he said "It shows that they, (the Great Barrier Reef Marine Park Authority), are not an independent body. They do what they are told to do by the Federal Government, their funding body". Martin said. 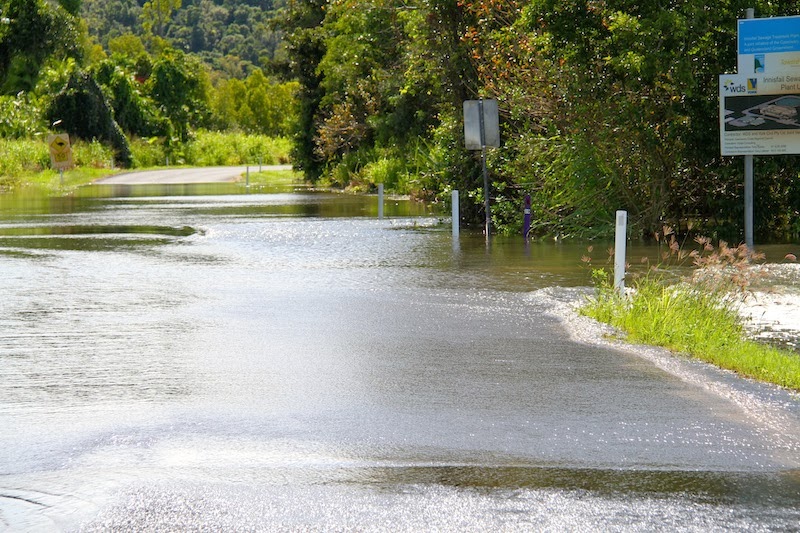 That of course beggars the question who is pulling the strings of the Abbott Government when this decision is clearly opposed by small business, particularly tourism and fisheries and most Australian citizens -  at least from the look of the polls in Queensland and around Australia?


Meanwhile on the other side of the Johnstone River here at Coquette Point the King tide marched all the way up the road and in the gate at the Nursery but not into the nursery. 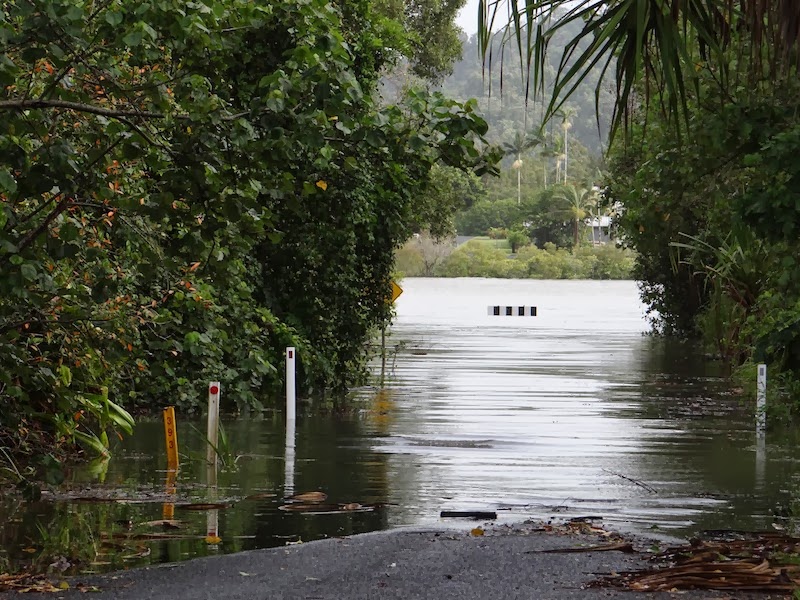 On the Coquette Point Road at Ninds Creek near the entrance to the Sewerage Works the water covered the road for several hundred metres. 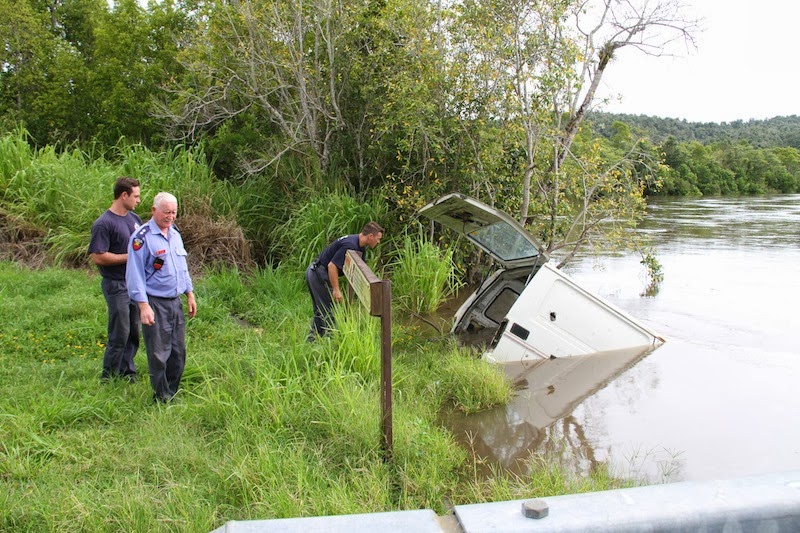 I had intended to take photos of Flying Fish Point on Thursday's King Tide however, on my way as I passed Ninds Creek I saw a van head first in the Creek. I noticed a car battery under the railings on the bridge. I went over to the van to see if anyone was inside. The muddy water made it impossible to tell and I poked around with a branch and could not see or feel anyone. I was just about to ring the police when I saw the Fire and Rescue truck coming. The 'boys' had a good look around, I pointed out the battery, and they decided it was a police job and they left.

It was an old van without plates so for some reason someone decided to drop it into the creek. An oil slick could be seen on the water around the van. Nothing about the van was in the Friday's Police Report.

It makes me very cross that the Police and  Fire and Rescue can be occupied in sorting out such a pointless event at a time when they are needed to assist the community with an approaching cyclone and the King Tides.


We experienced strong winds and monsoonal rain while TC Dillon was around and early on Wednesday morning I found a four o'clock moth on the ground in the nursery. The poor thing was all wet. I picked it up and instantly it started to flutter its wings but made no attempt to fly away. After about 10 minutes of this I placed the moth high on a leafy branch from which it soon flew away. High winds and heavy rain takes a huge toll on delicate creatures like butterflies and moths. 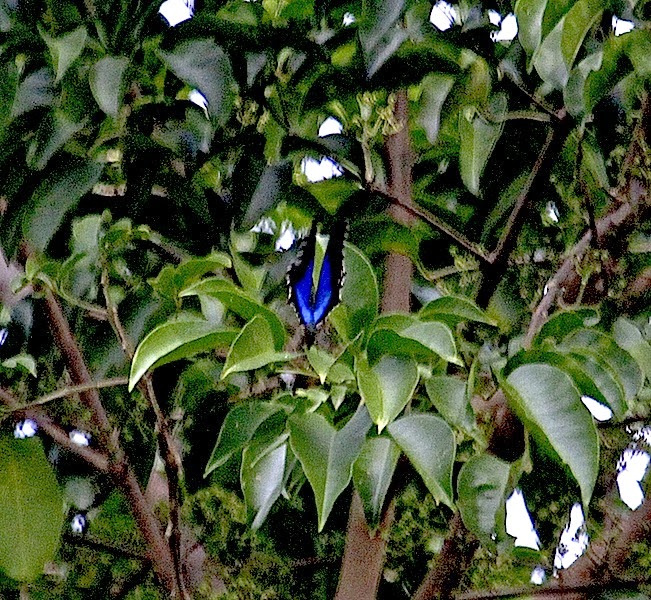 But is is these very humid conditions that trigger mating and egg-laying in many species. The spectacular blue Ulysses butterfly is very active at the moment and they have been laying eggs on the leaves of their host plant Melicope elleryana. The M elleryana seeds are almost ripe and already seed eating birds like the shining starling are checking them out.

At the moment the shining starlings are feasting on the sweet fruits of silky tamarind. Guioa lasioneura. 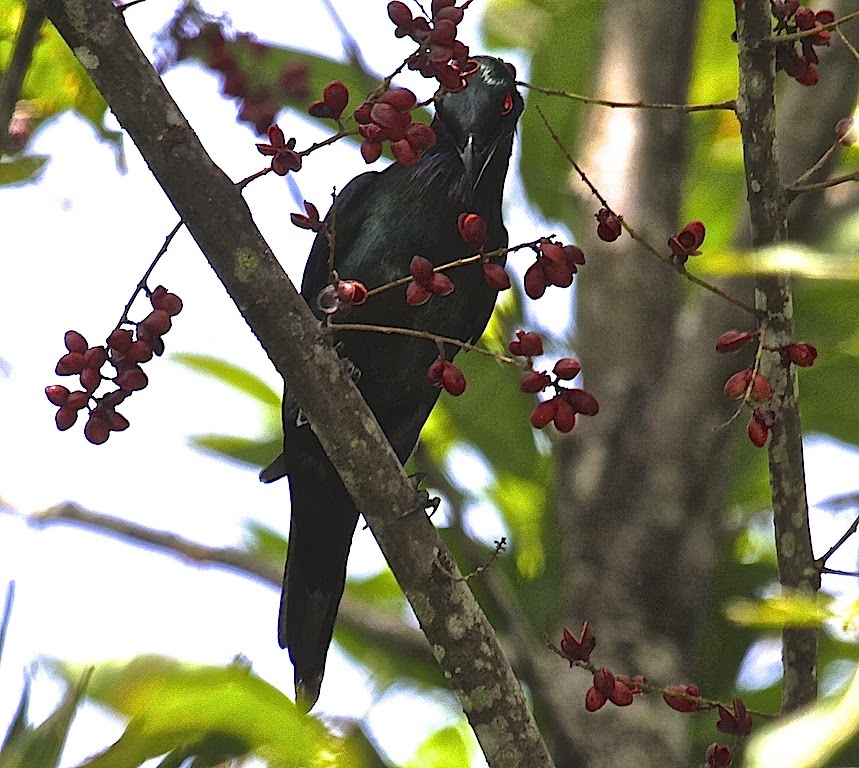 While I was on the other side of the river I visited the White Apple tree,
Syzygium forte
where the shining starlings have built hundreds of nests. 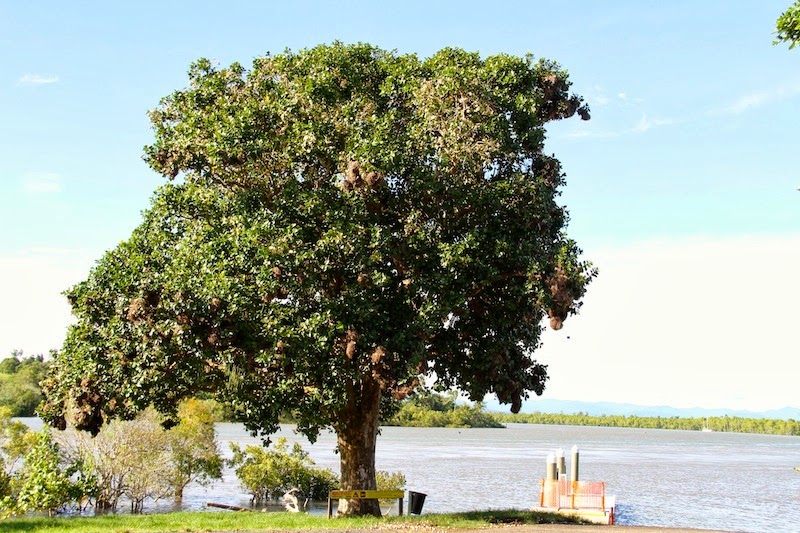 I watched the shining starling returning to their nests flying in from across the river at Coquette Point and from around Flying Fish Point. The shining starlings arrived at their nest, then coughed and coughed until they had regurgitated the fruit. They then offered it to the open beak of the waiting, hungry chick.

The shining starlings are no longer gathering nest building and or nest repair material and it would seem that these chicks are the last for the season. Soon the Shining Starlings will leave for their migratory journey to PNG & Indonesia. 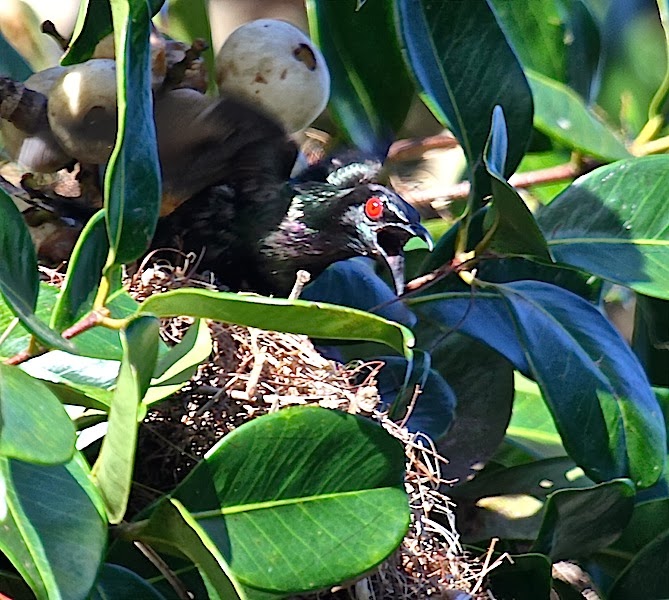 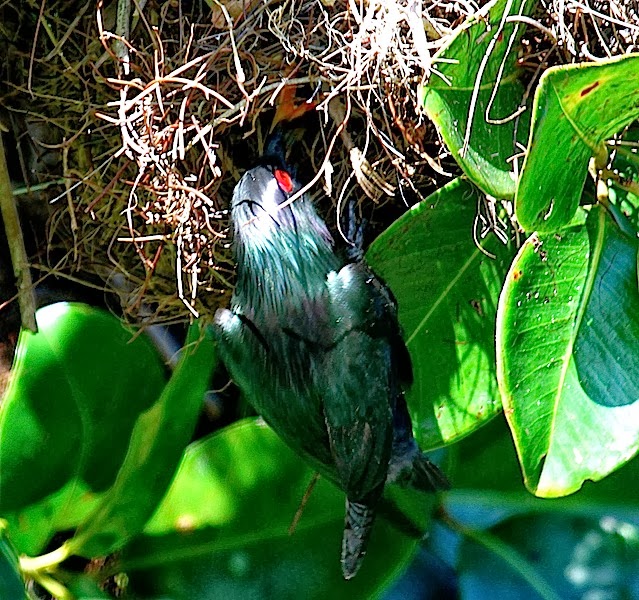 The Pied Imperial Pigeons are showing no signs of departure and the swooshing of their wings can be heard throughout the day as they move from one food tree to the next. The strong winds this week have not in any way changed their daily routine. Perhaps in retrospect, it was a sign that TC Dillon was not crossing the coast anywhere near here. 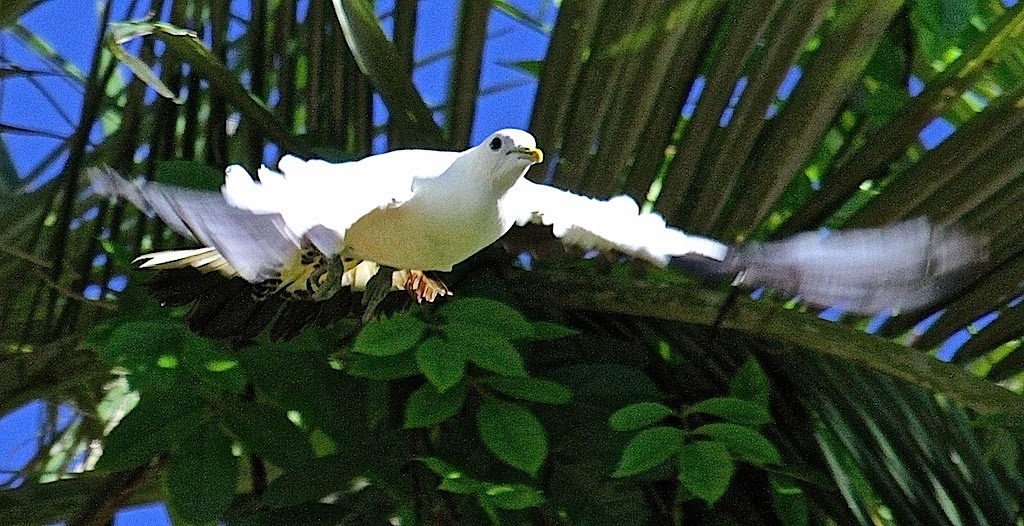 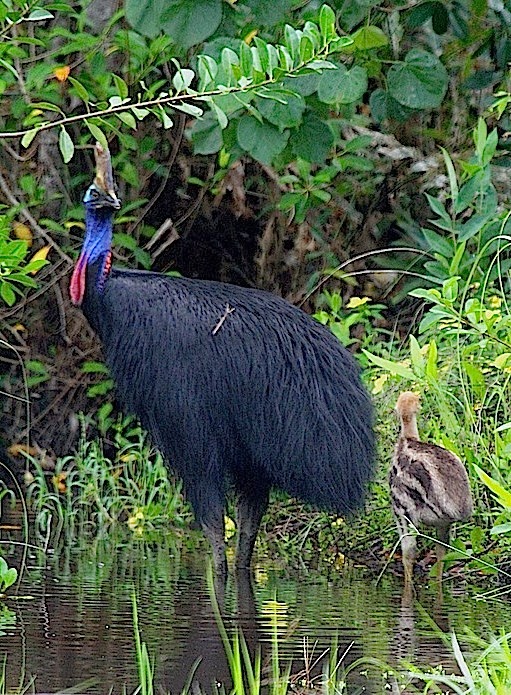 Cassowary Snout and the chick however, were very nervous and alert with the sound of the wind.

Later when the wind died down I was watching the chick eating fallen Damson Plums at the nursery gate when Snout decided to leave. He was almost across the road when he stopped and turned. I did not hear a sound from Snout but the chick suddenly made a loud clucking sound and ran as fast as its little legs could carry it to Dad. 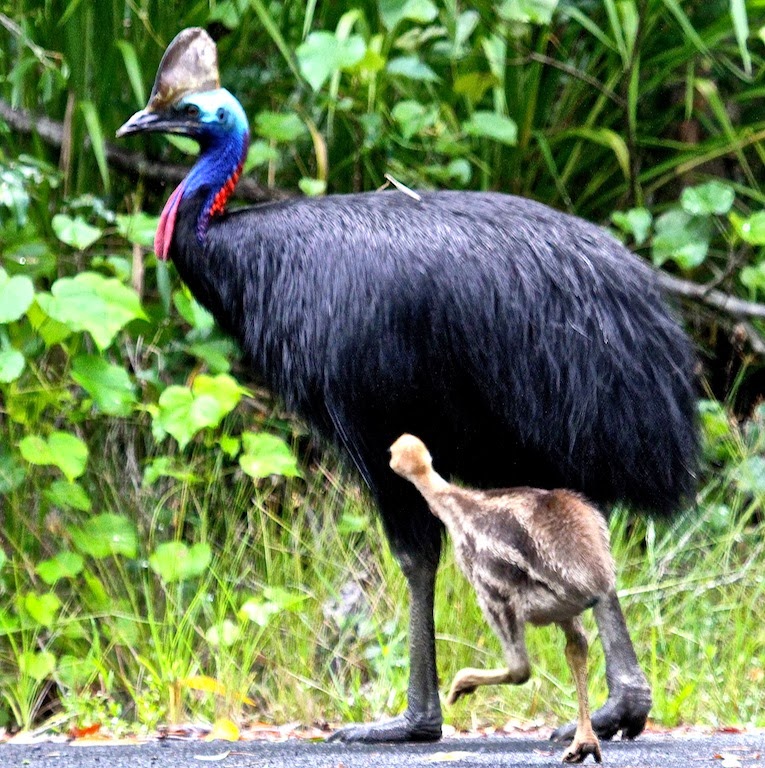 They walked across the road into block 27V and I crossed the gallery rainforest beside the road higher up to see where they were going.

I saw Matriarch cassowary Jessie coming across the paddock from the melaleuca wetlands. When she saw Snout she stopped and then with vigour she dropped her head to her chest three times. 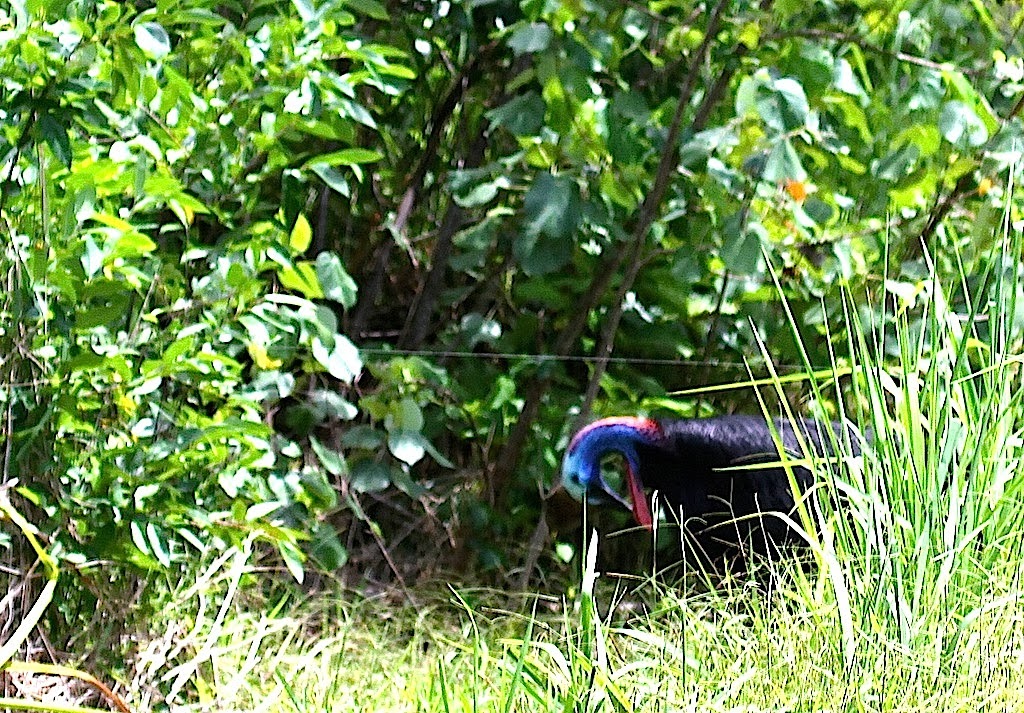 She then entered the gallery rainforest but Snout turned and came back across the road and took the chick up to the rainforest block on the hill.

I did not see where Jessie went but she did not cross the road and I can only assume she returned to the melaleuca wetlands. At no time did she show aggression to Snout or the chick. 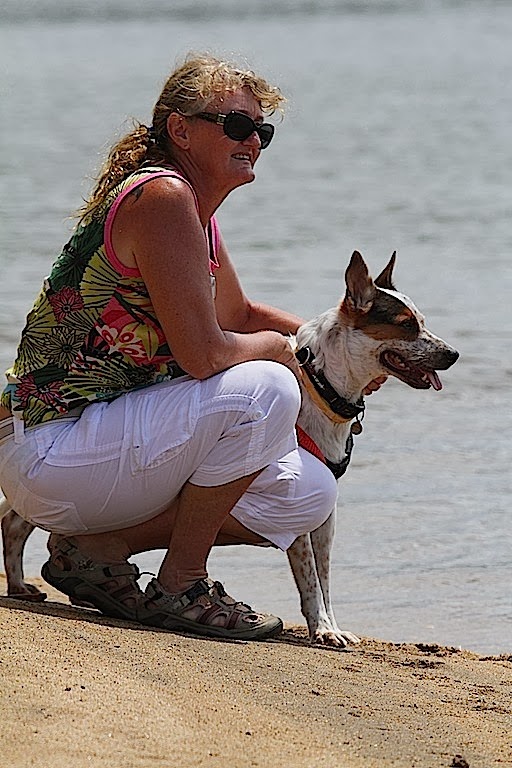 My dear friend, remote area nurse, Bernadette with doggy mate Pookie returned to Innisfail this week and we caught up over a cup of tea. Bern took Pook down to the Johnstone River and gave him some instructions about a dog's future seafaring duties. For a desert dog Pook sure loves the water.

As you may know another cyclone in the Coral Sea was named today. Cyclone Edna category 1 is located  430 km east of Mackay and is moving away from the coast while weakening. It is expected to be steered northwards on Sunday by the low level flow.

The monsoon trough is very active still and the chances for tropical cyclone development in the Coral Sea and Gulf remain elevated. So it is not the time to put the garden furniture back outside.

Henry, Nellie and James mothballed the turtle rehabilitation centre in case of a cyclone, however, if necessary I am sure they can have it up and running within an hour or so.