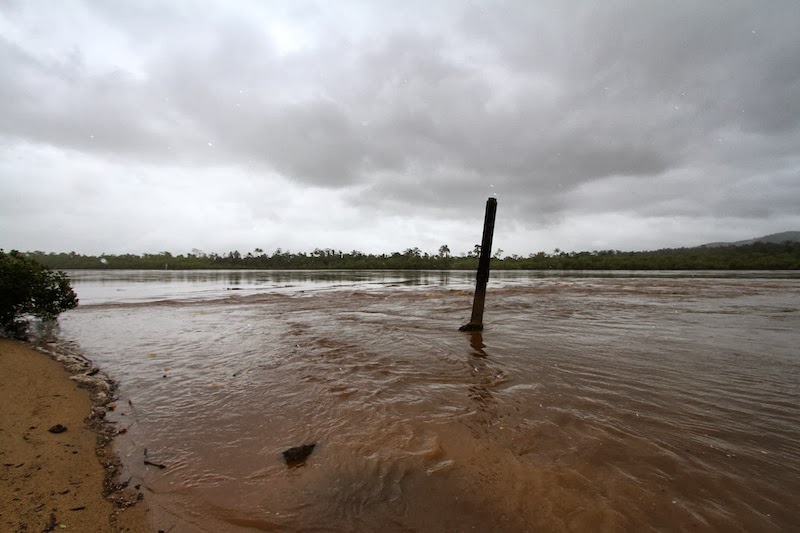 On Monday a flood warning was issued for the Johnstone River.  Last week TC Dylan dragged the monsoon down to south-east Queensland, when Dylan petered out the monsoon returned and at the same time a south-easterly surge pushed up the coast causing a convergence zone over the Wet Tropics. Falls of over 400 mm were recorded in catchment areas and all the Wet Tropics Rivers were in flood. The Johnstone River became a roaring torrent and overflowed into Jodrell Street. 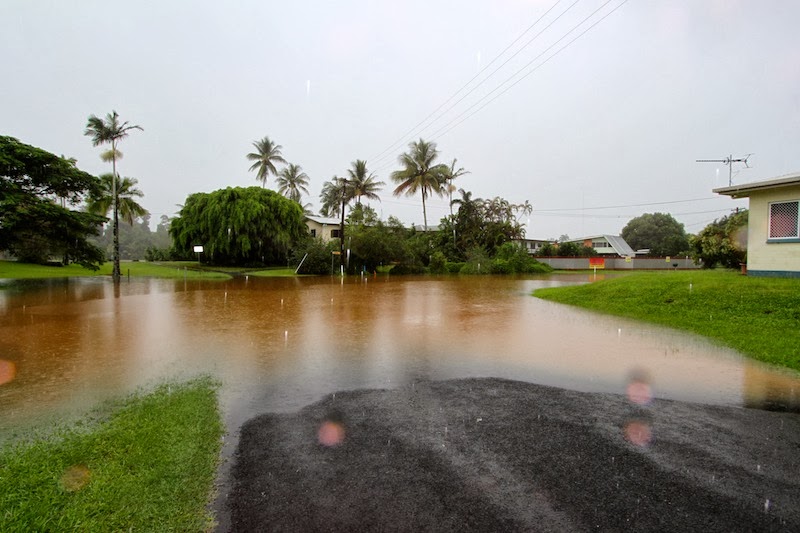 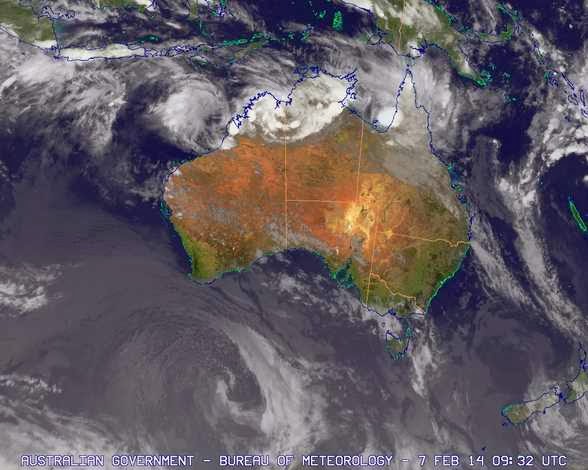 Many other roads in the Shire were also flooded.
The monsoon trough is still sitting over the tip of north Queensland and has five tropical lows embedded in it.  The low which was TC Fletcher is playing hide and seek with the weather bureau and although the prediction is for it to move in a westerly direction there is still hope that it will move south and bring rain to the drought areas of western Queensland.

While in the north of Australia we are experiencing, what is in fact, a normal wet season in the south of Australia severe to extreme heat wave conditions are continuing to be experienced. The forecast for Monday is that these heat wave conditions will affect inland NSW, the southwest of Queensland, far northwest of Tasmania, throughout South Australia as well as large parts of northern and western Victoria as well as the southwest corner of Western Australia.

Tonight residents in the Adelaide Hills are being evacuated as bush fires threaten homes. Courageous firefighters are battling fires amid extreme heat conditions.

Meanwhile, heavy rain continues to fall over the Wet Tropics and a flood warning has been reissued for all coastal rivers in far north Queensland.

It is a constant job to keep the leaves out of gutters that want to become rivers but the consequences if you don't is a washed out road.

While I was clearing the leaves out of the roadside gutter alongside the rainforest, yet again this afternoon, I noticed a number of new saplings had burst into new growth and their beautiful new red leaves showed the promise of the forest returning to its pre-cyclone splendour.  The sapling tree on the right Syzygium alliiligneum no doubt has grown from a cassowary scat. 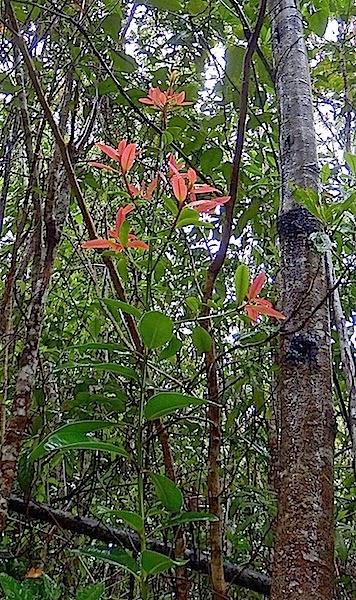 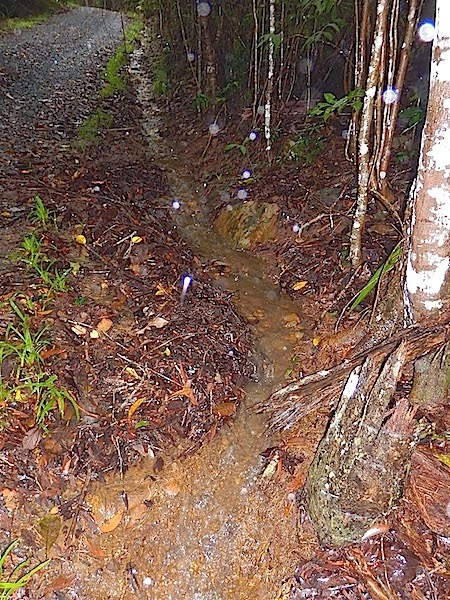 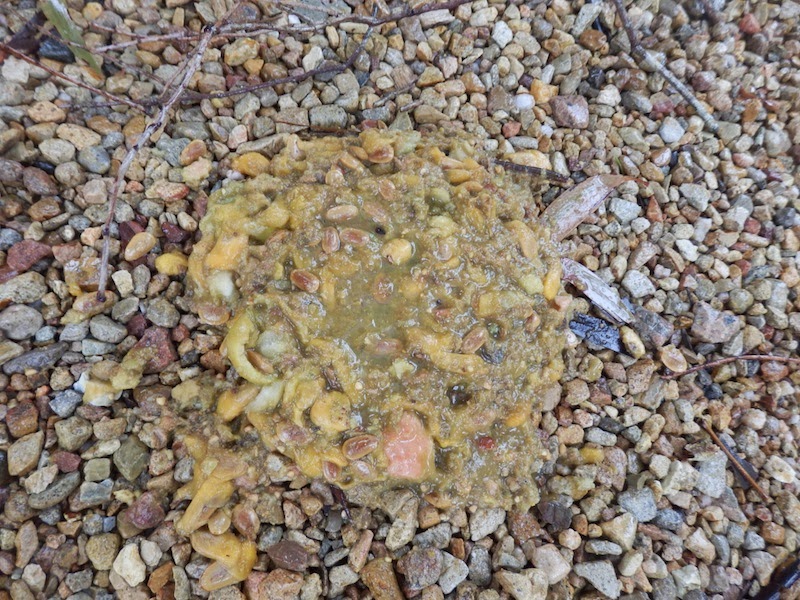 This week the wild guava trees are dropping their fruits and the cassowaries are enjoying this tasty addition to their diet. The scats still contain a lot of pond apple and also white apple as can be seen in the very fresh scat on the left. 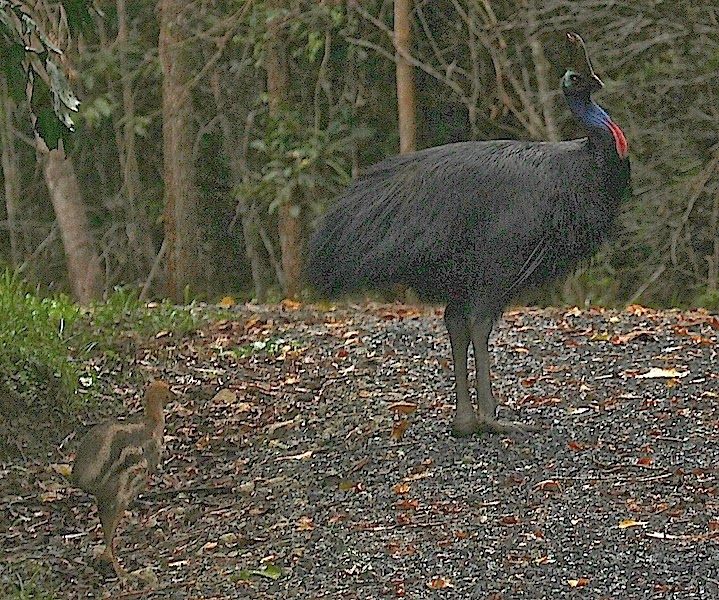 Every evening, about six pm, Snout walks up the hill and crosses into the rainforest to bed down for the night. If the chick is dallying a little Snout stops and turns utters a low growl and the chick scurries to his side. 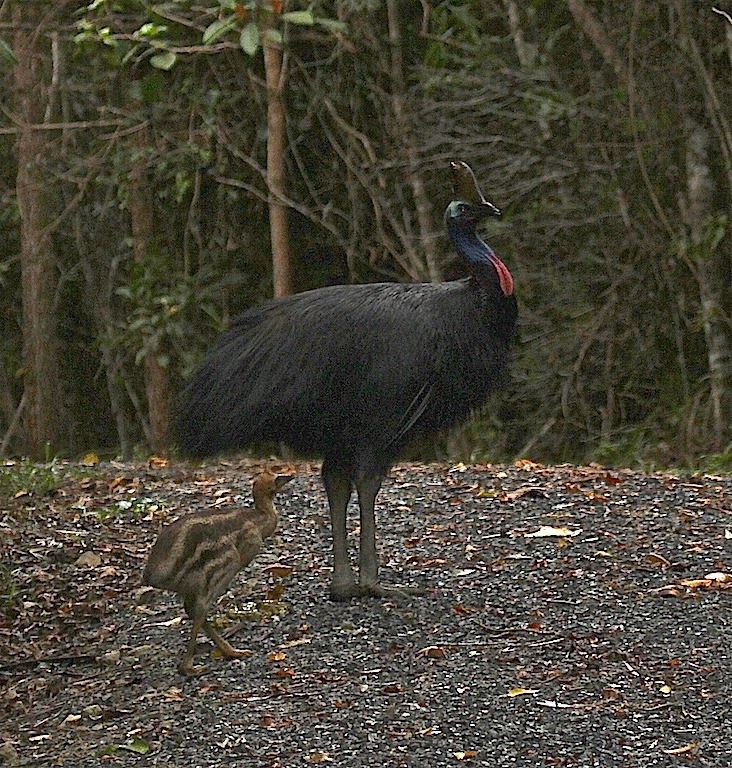 One can almost read in the body language of the birds, the little chick making excuses for being slow and Snout warning that it was time to make a bed before nightfall.

Snout is proving to be a very attentive Dad and I am very hopeful the chick will survive.  Ruth and I discussed the naming of the chick this week and agreed on Ky. 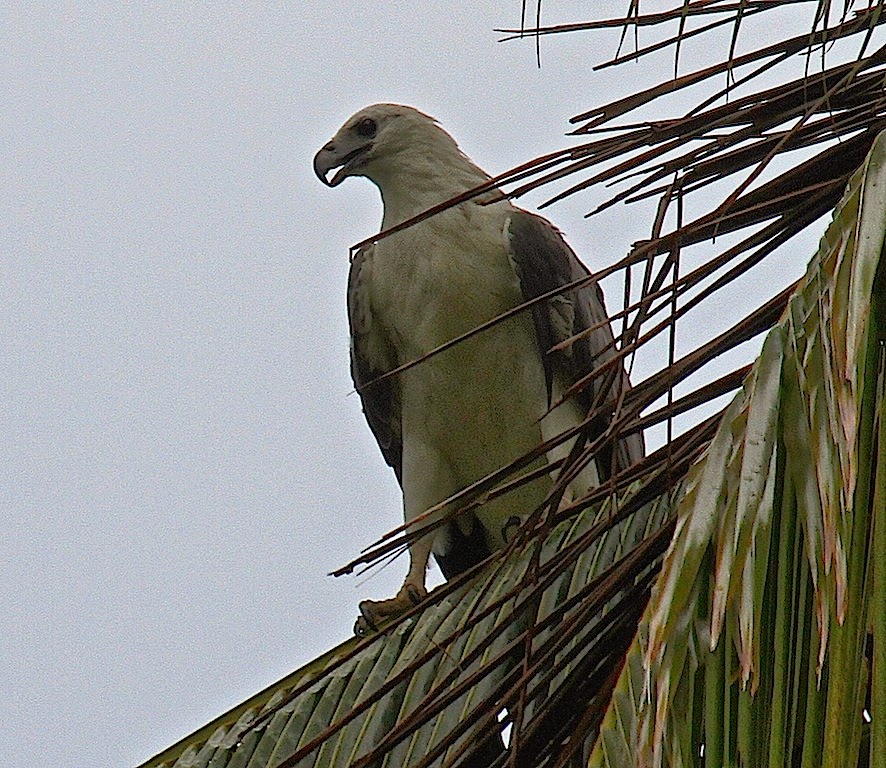 I watched the old female white-breasted
sea-eagle fly very low over the Johnstone River straining to find a feed in the turbid flood waters of the river. She flew into a tall coconut tree alongside the river where she sat on a branch to gain a vantage point and perhaps find some reprieve from the wind and rain. 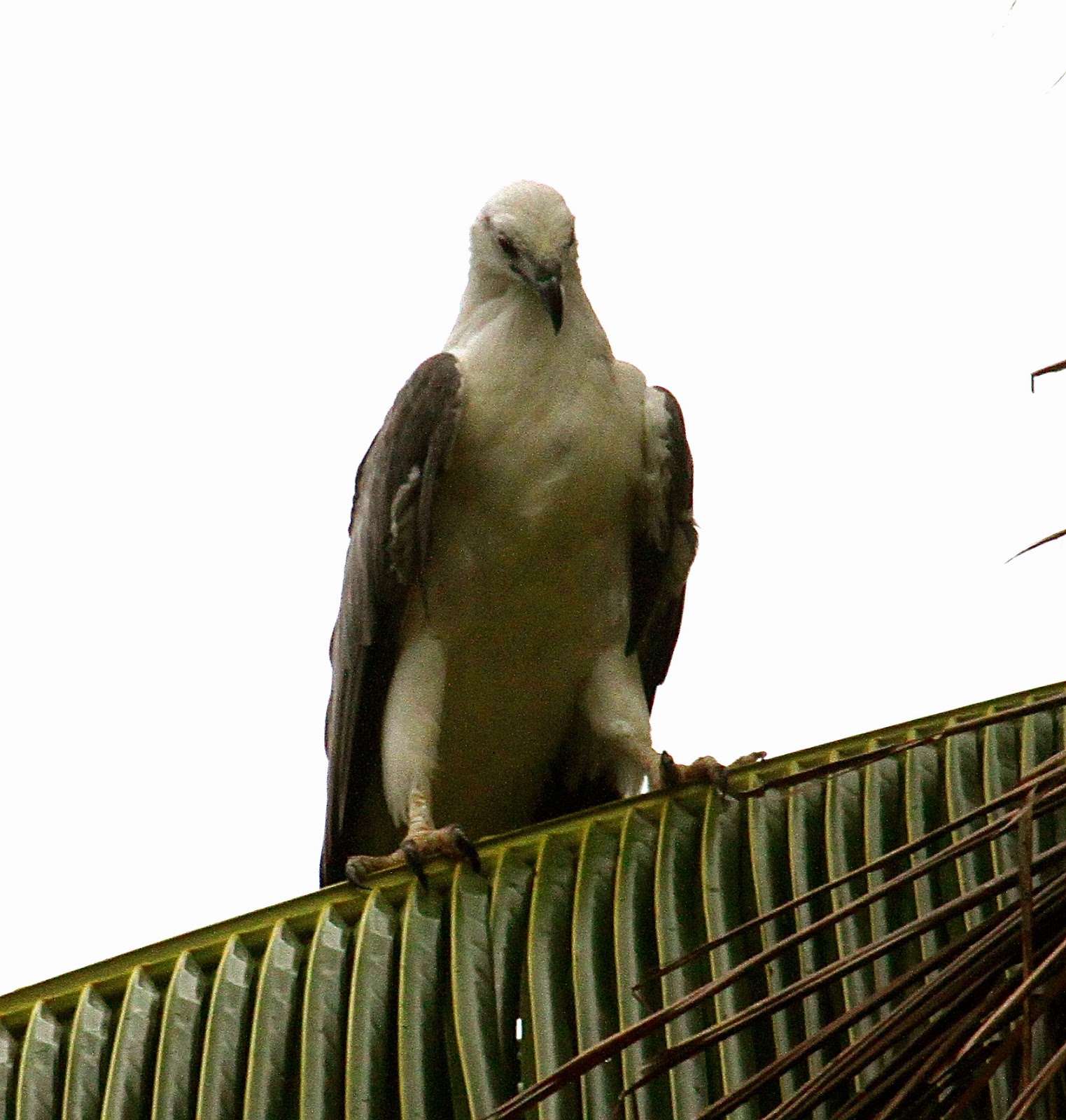 I moved around the tree to get a better photo of her and she became aware of my presence and looked down at me. Unfortunately, although overcast and drizzling rain, I was looking into the glare of the morning sun and it was not the best conditions in which to photograph.

This White-breasted Sea Eagle has its nest on a tall Melaleuca leucadendron tree deep in the mangrove wet-lands of Coquette Point. Many years ago, when I used to canoe through these wetlands,  I saw her nest; unfortunately in those days I did not carry a camera. Now the access, through the maze of creeks and lagoons, to her tree has been blocked by cyclone debris. However, I often see her fly over the estuary  and up the Johnstone River although, I have never before seen her land on a coconut palm frond. If it is the same Sea Eagle I have been watching all these years, and I believe it is, she must be approaching 30 years which is about the maximum lifespan for these birds.

The While-breasted sea eagle breeds between May and October so she has a few months of freedom to explore and hunt before she returns to domestic duties. 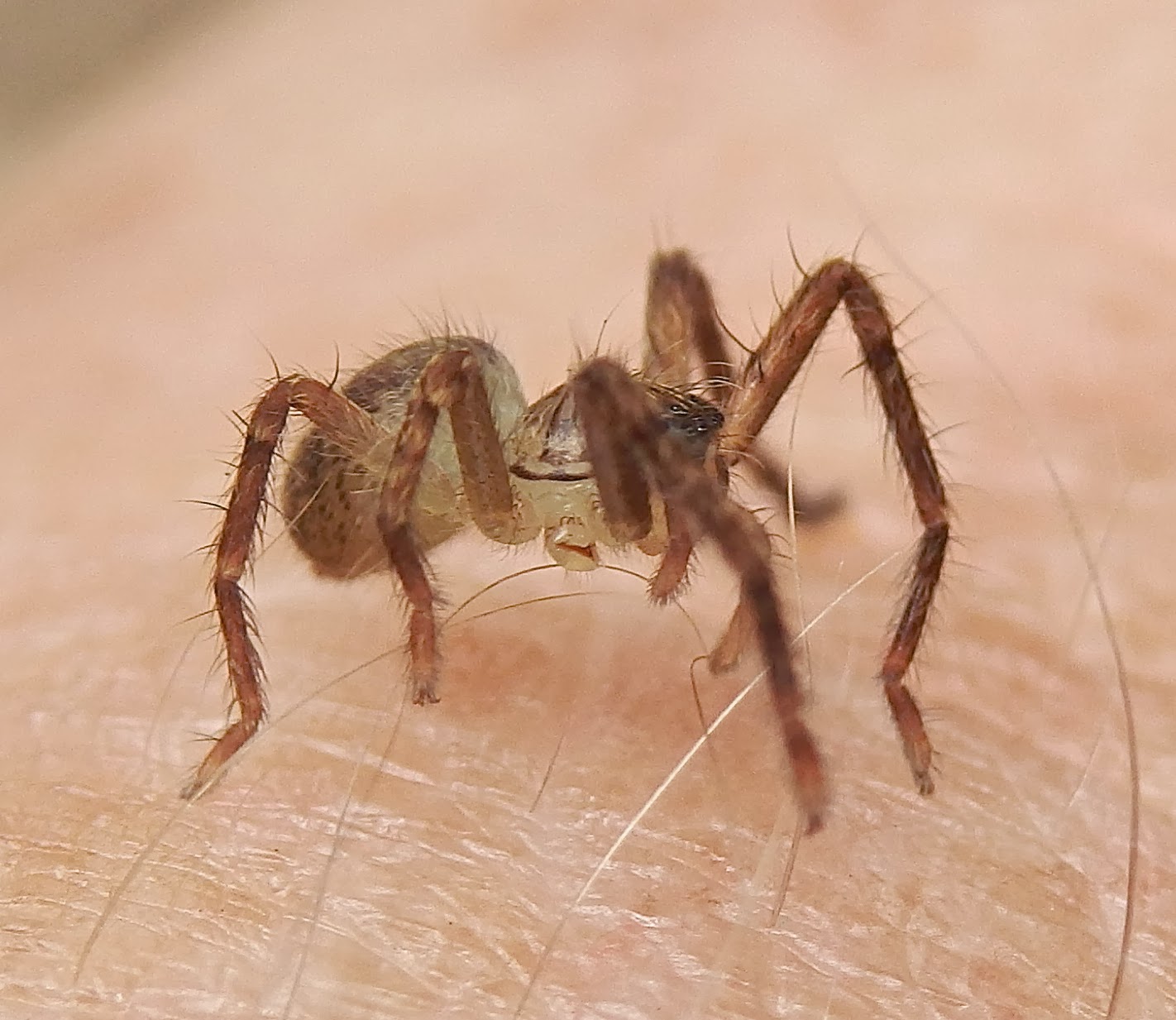 I know it is hard to believe but I found two more species of jumping spiders at Coquette Point this week that I had not photographed before. The one below was about 5 mm long and very active. 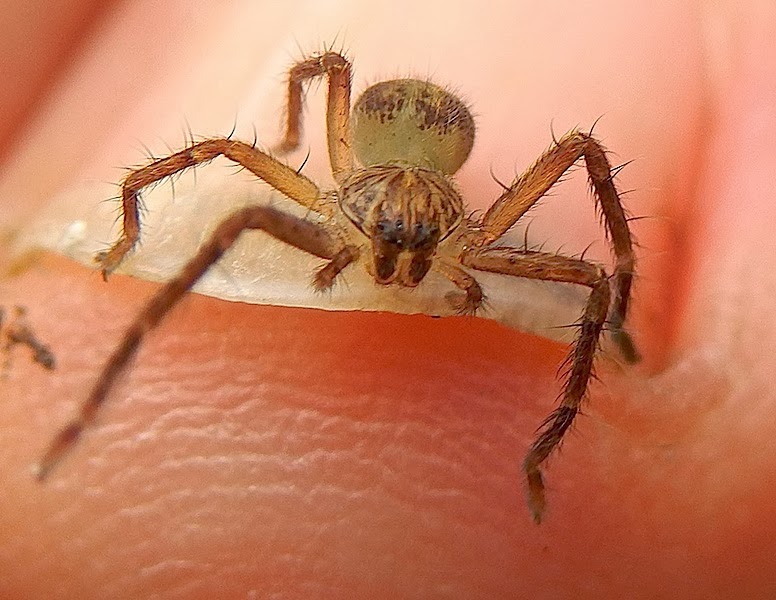 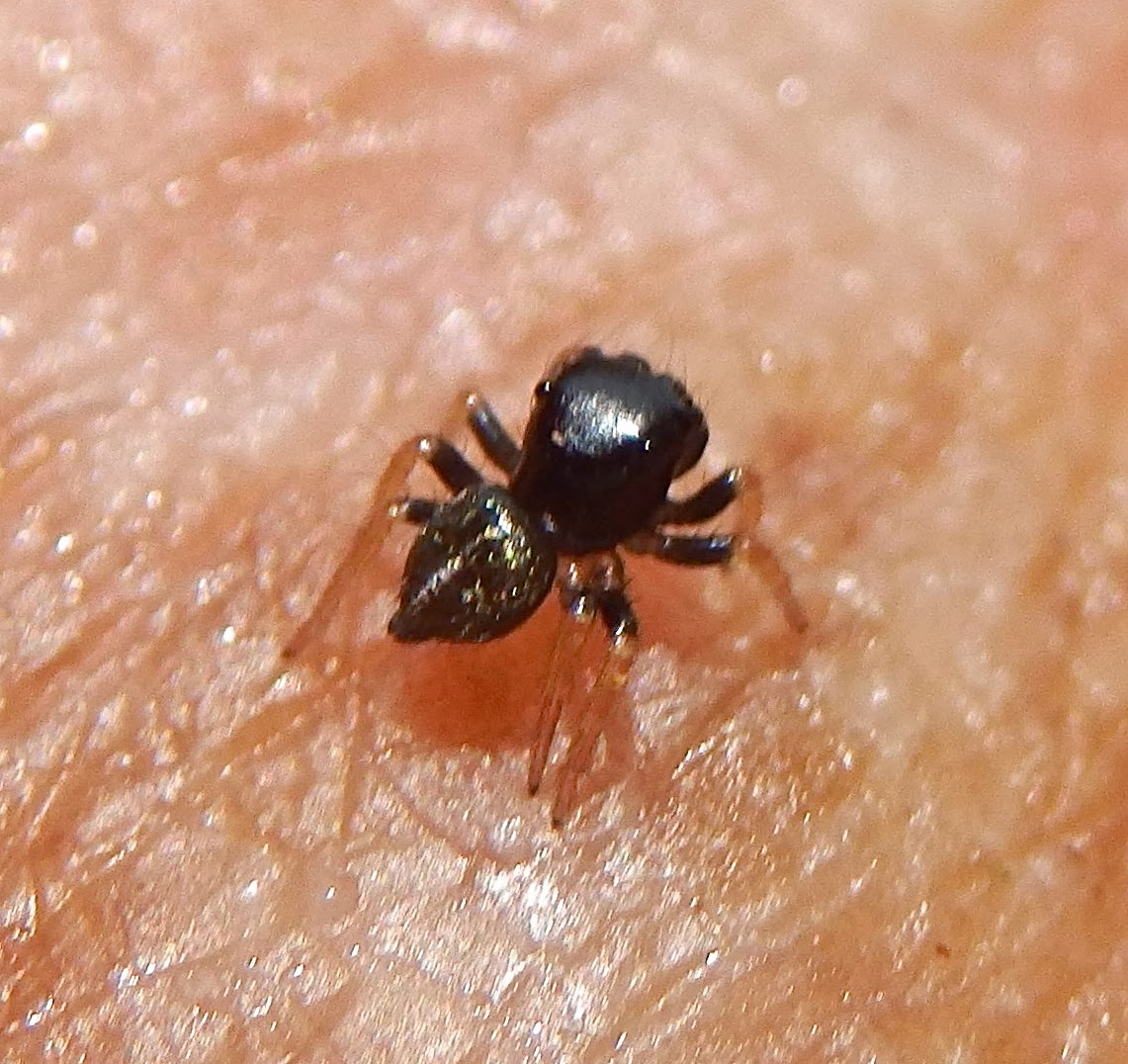 Whereas the other spider was no bigger than a small pinhead, about 1 mm and I believe it is of the genus Simaethula but that is only a guess. 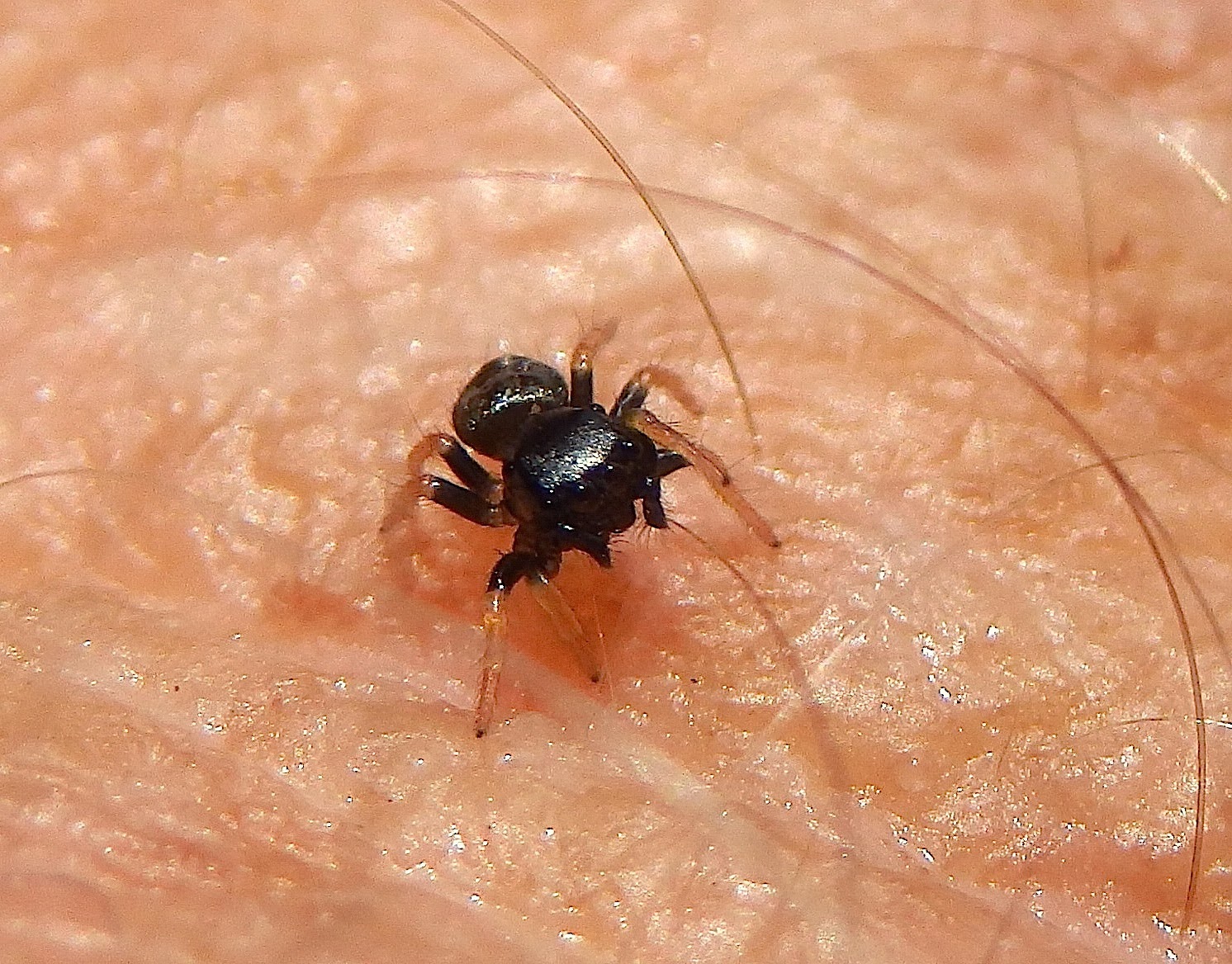 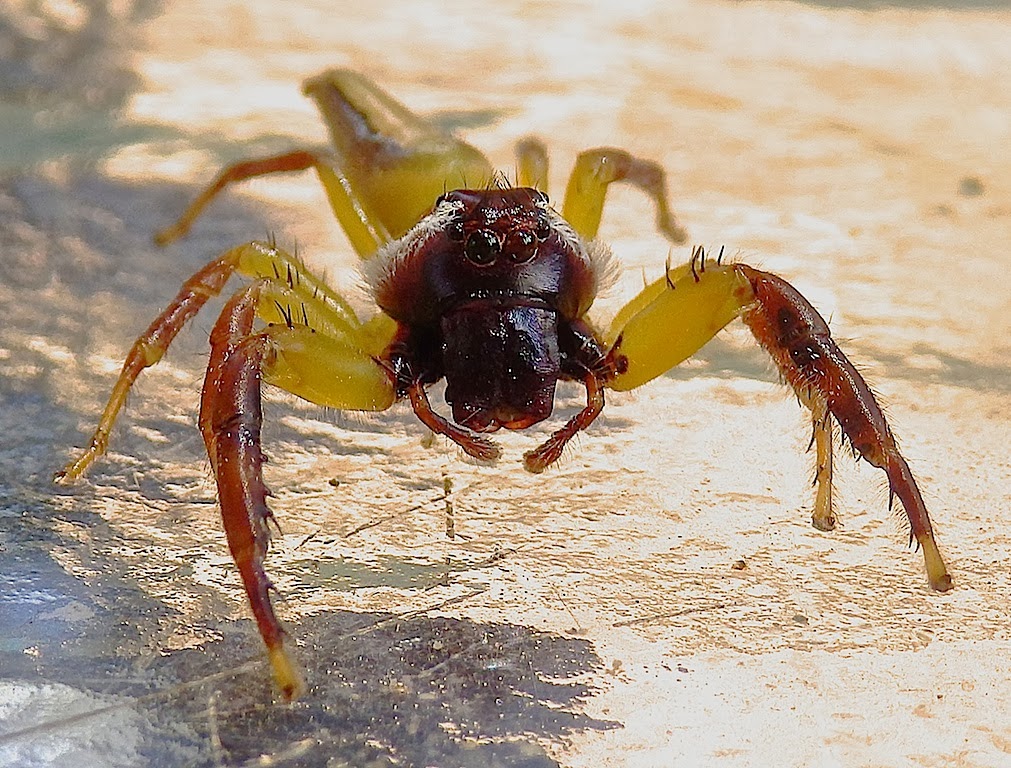 Lots of male Mopsus mormons around this week but haven't seen any females of the species. 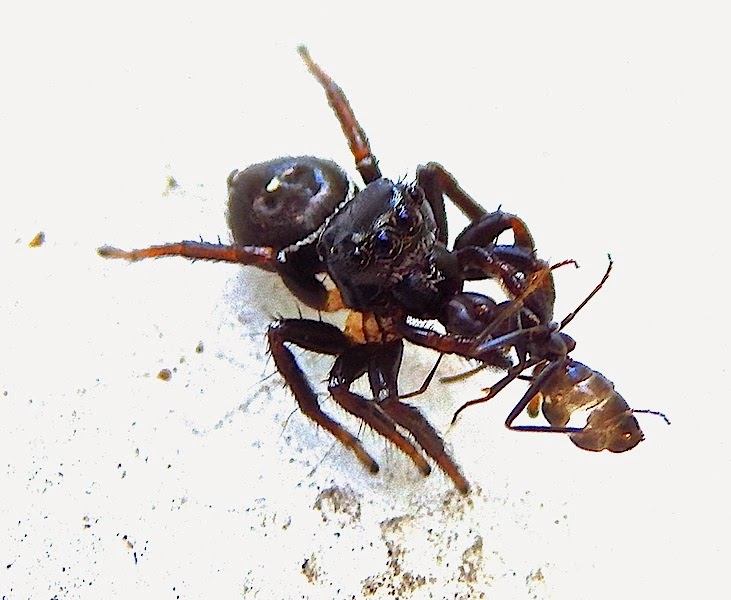 One little Zenodorus orbiculatus was going quite silly running around in circles with an ant in its jaws. I had the feeling the ant was trying to bite it. It eventually disappeared into the shrubby still holding the ant. 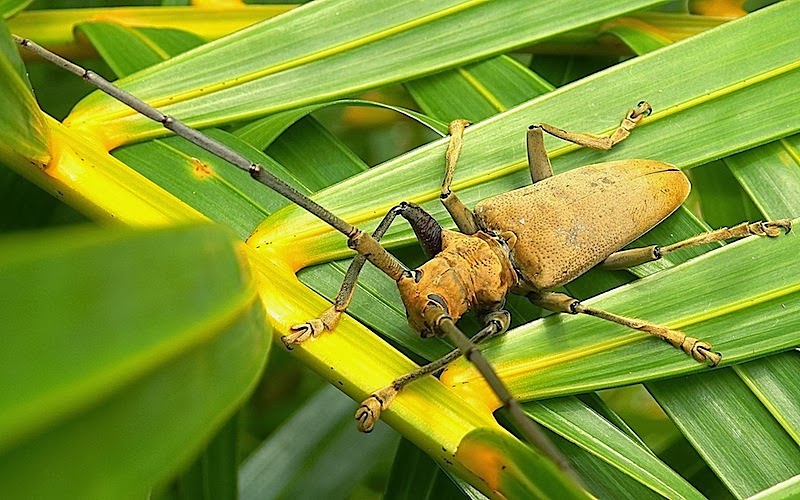 The wet weather has triggered the Longicorn beetles into activity. Although this is not a beetle you would want to handle as it may bite with strong mandibles that can cut. However, one must admire the armour-plate exoskeleton structure of the bodies of this beetle, the long legs are jointed and possess sharp claws.  The antennae are longer than the beetle's body length; they are like two sensory lances and they are mounted within the margin of the eye. The eye extends in a semi-circle around the antennae and allows the beetle a view front, sideways, above and behind. The hexagonal lenses of the eye can be seen in the photo below.

The larvae of some species of Longicorn beetle particularly from the Prioninae family were eaten by rainforest Aboriginal people in the same way dry country tribes ate witchetty grubs which are the larvae of the cossid moth. 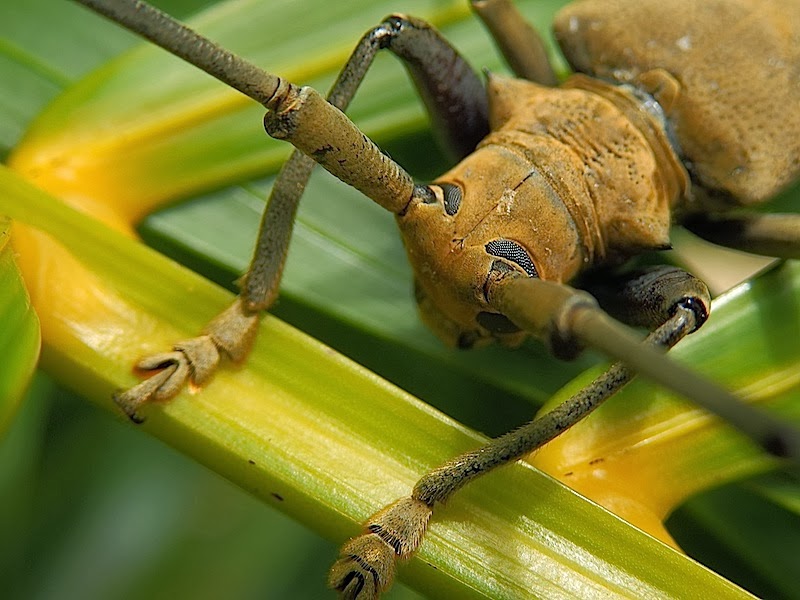 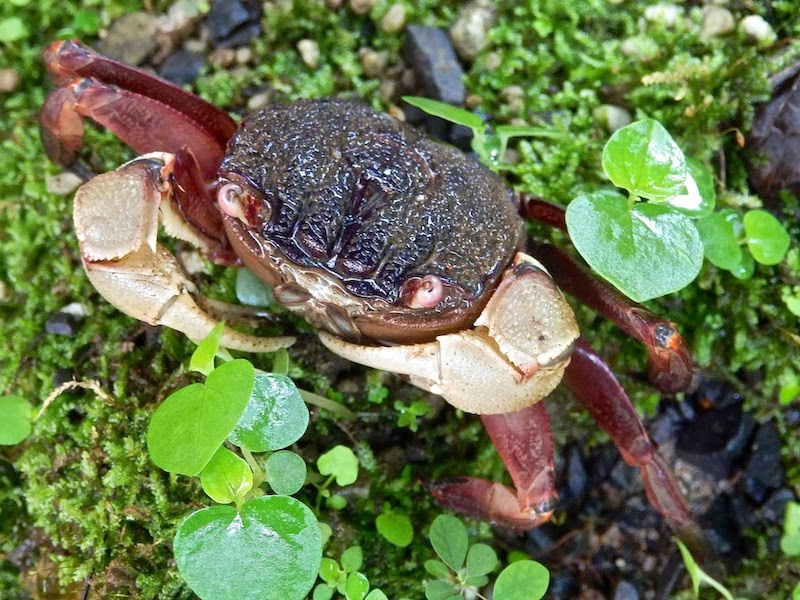 The wet weather and last week's King tides have confused the mangrove crabs. They have invaded the nursery and can be found scurrying around under benches and between pots, much to the delight of children visiting the nursery.


In spite of the rain the creamy white flowers of the sumac tree Rhus taitensis have opened and they spread across the broad canopy of the tree. In the dim and damp conditions over the last week the sumac flowers brighten the rainforest and offer a feast of nectar to insects. 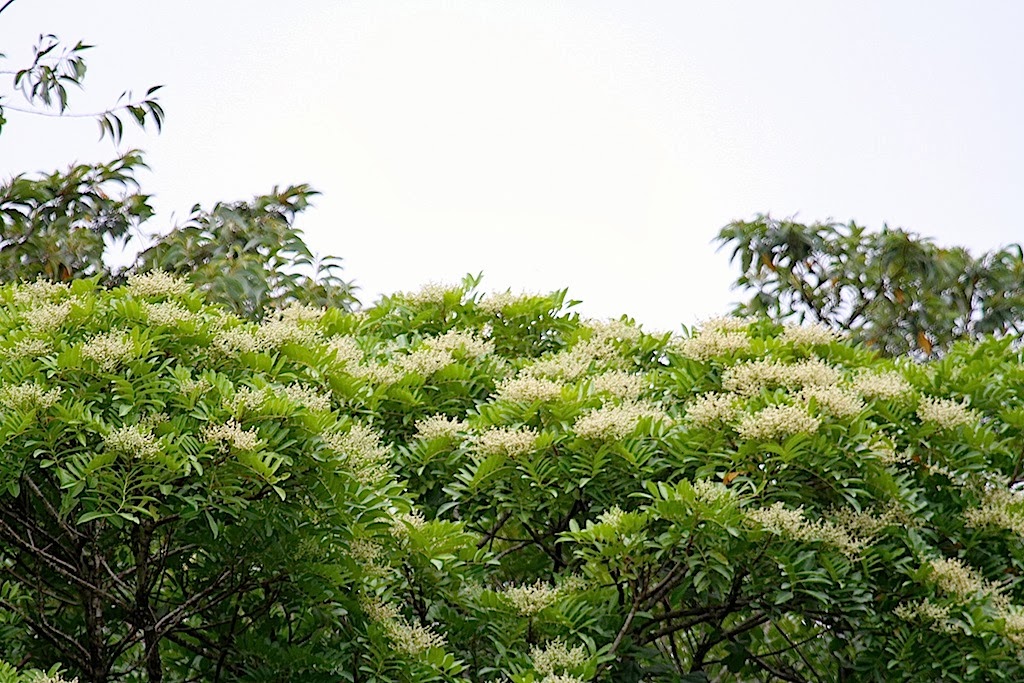 I hope you find a flower to brighten your day,

cheers for this week,
Yvonne