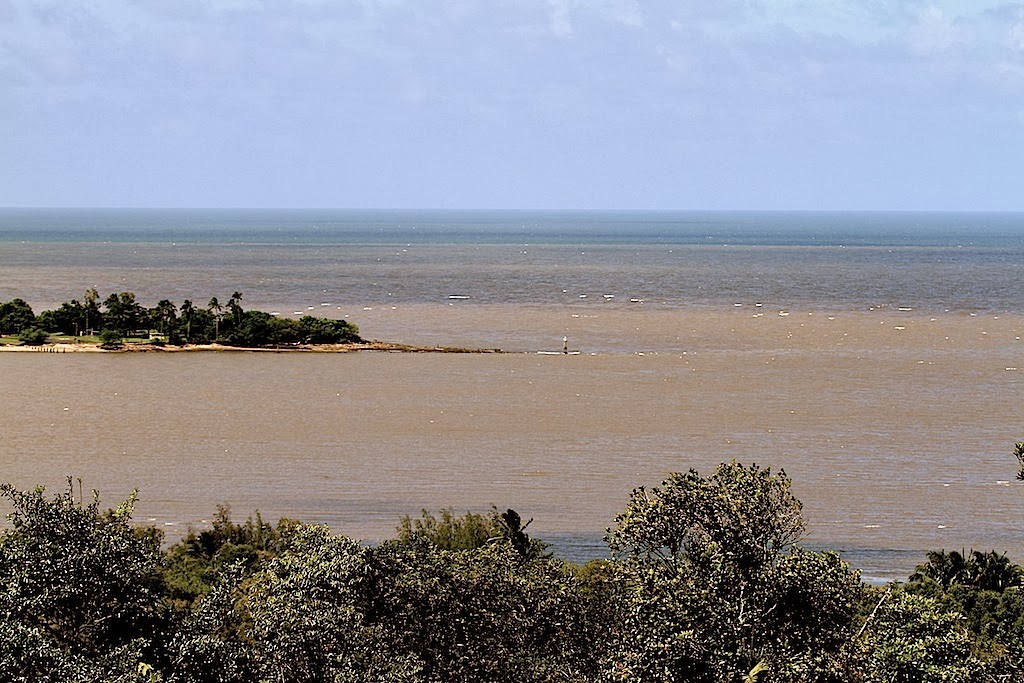 For the time being the sun is out and already the wet is distant in our minds. However, you may have noticed the inshore Coral Sea's waters are still turbid from the coastal run-off of this recent flood event. High-bank erosion along the North and South Johnstone River, caused by the clearing of all riparian vegetation and combined with poor farm practices, results in the loss of precious farm top-soil containing fertilisers, insecticides and residual herbicides. The effect on the Great Barrier Reef from these sediment-loaded-run-off-waters is devastating.

Meanwhile back in the rainforest cassowary chick Ky is growing fast. He has lost his blue eye colour and his eyes have  turned a deep shade of brown. On his chest a black patch is appearing and his white stripes are slowly being covered by brown feathers.

I was surprised to see Ky plucking at grass like a wallaby, he pulled the grass out by the stalk and ate it. Just goes to show we all need to eat our vegetables. 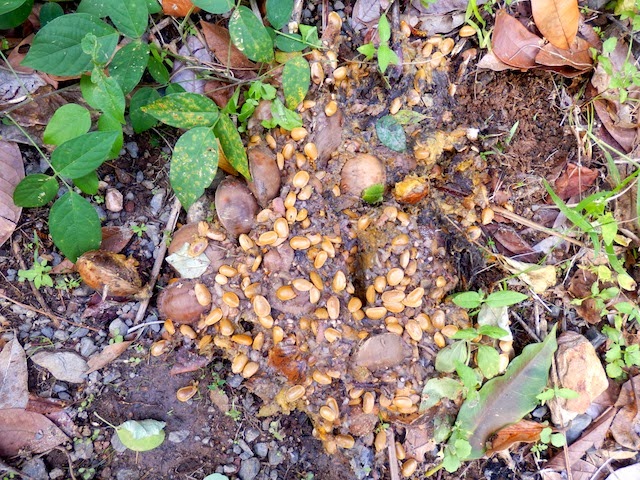 The beach almond Terminalia catappa fruits are ripe and falling and this week the cassowaries have added these fruits to their diet. They are still eating lots of pond apple, guava Alexandrae palm and white apple fruits.
The ripe almond fruits have brought the black cockatoos down to the coast and I hear their call as they forage in the beach almond trees behind the mangrove zone; no photos yet.


Snout is a very protective Cassowary Dad and little Ky is never more than a few metres away from him. 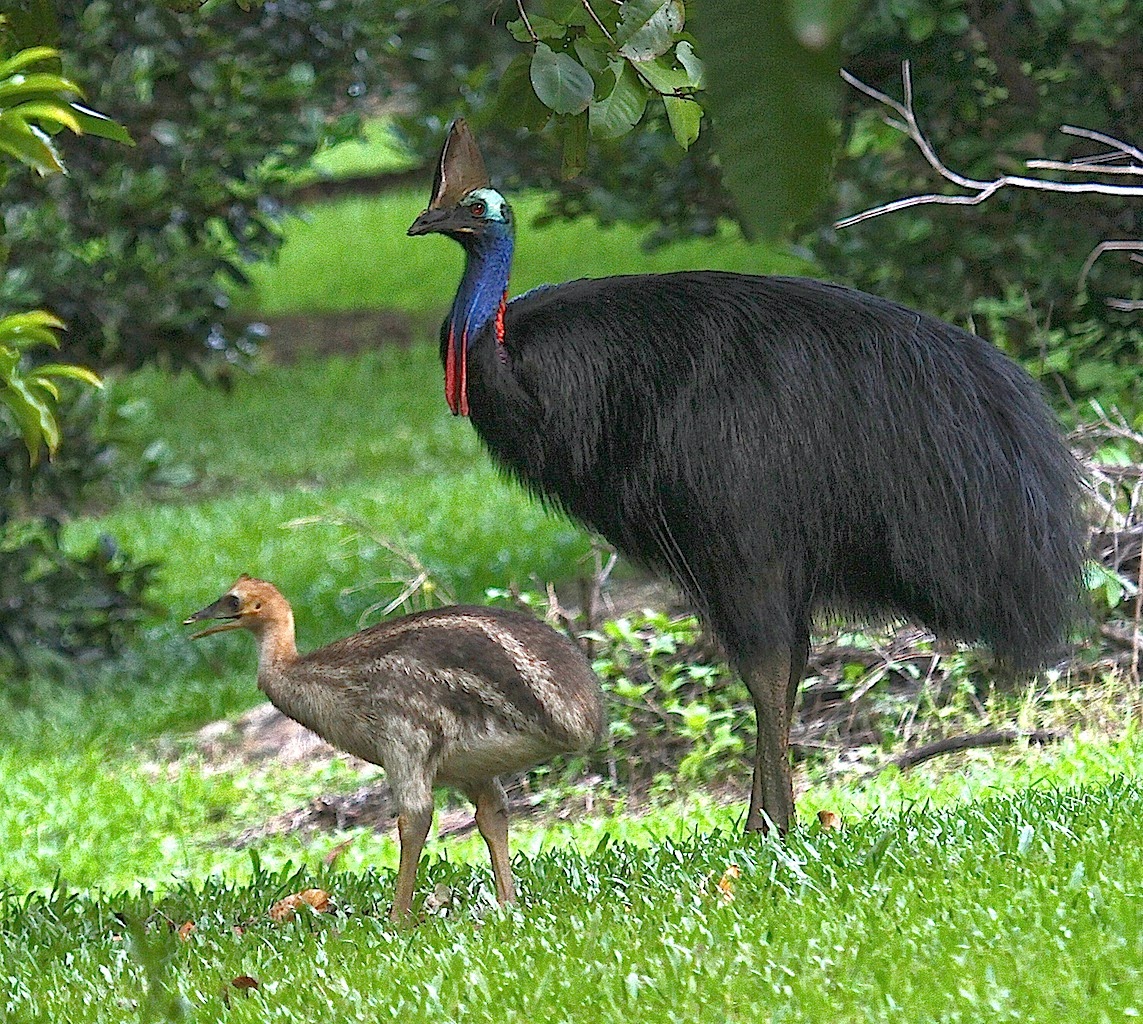 The bush stone curlews have been calling at night with ever increasing excitement and this week they took their new chick on a day time exploration around the nursery grounds. 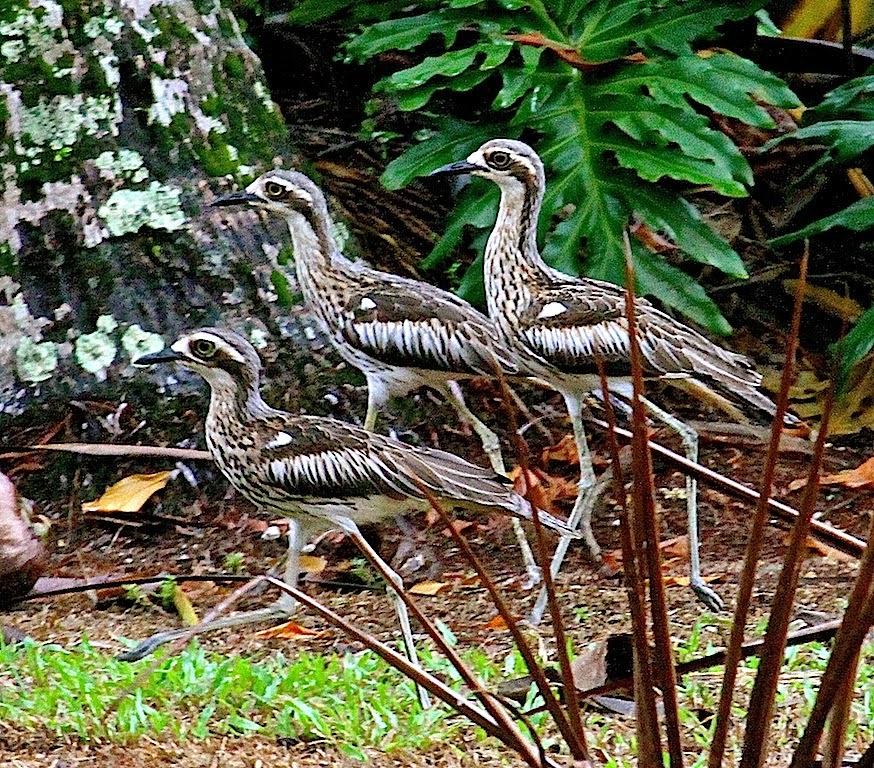 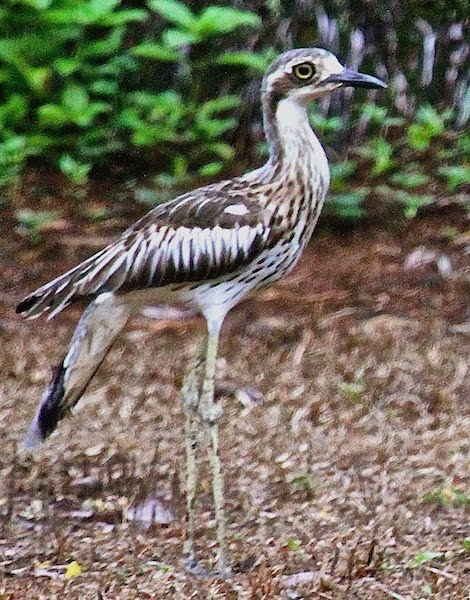 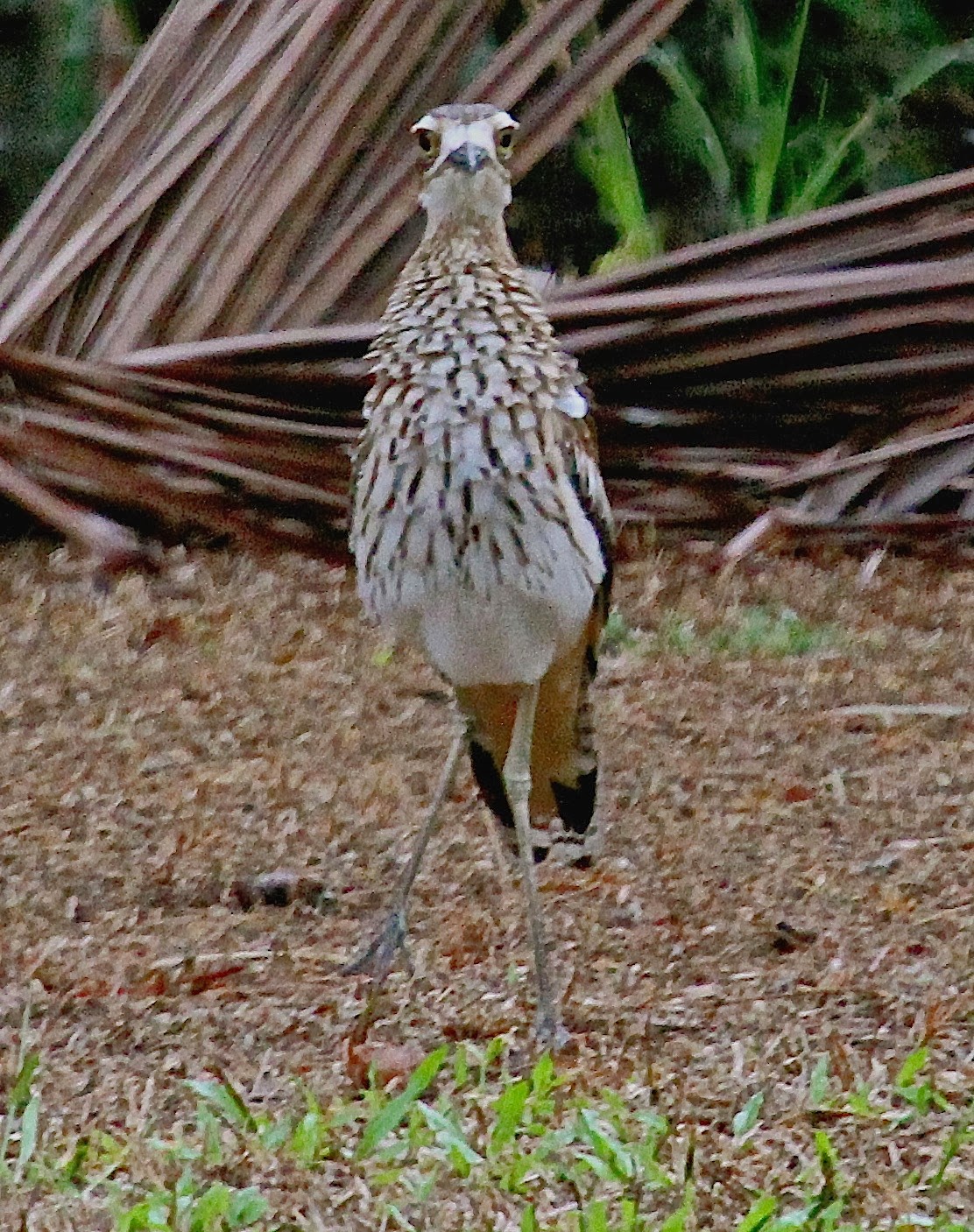 The chick is large, about half the size of the adults and is constantly on the move happy to be free to run about.
Mum and Dad watch on and seemed to be in discussion over the chick's youthful exuberance.

Like many ground nesting birds, bush stone curlews are in trouble. Once wide-spread around Australia they have already disappeared from many locations. One of their greatest threats comes from lawn-mowers and slashers which run over eggs and newly hatched chicks. 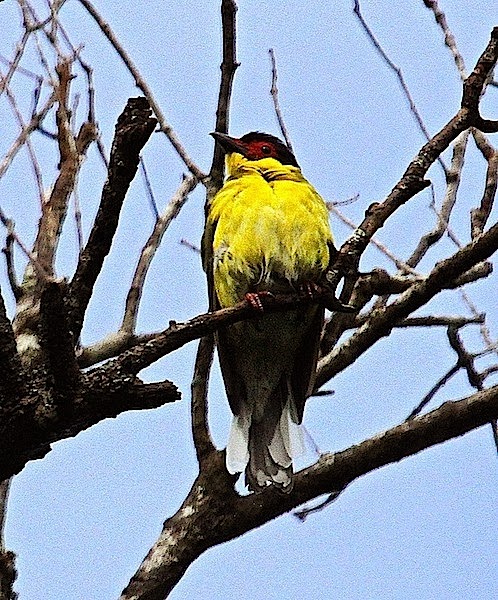 Over the last few weeks I have seen an increasing number of fig-birds struggling to feed in the rain. When the rain eventually stopped they sat out in the open sunbathing. The male fig-birds puffed up their bright yellow breast feathers and faced into the sun drying out for the first time in two weeks. 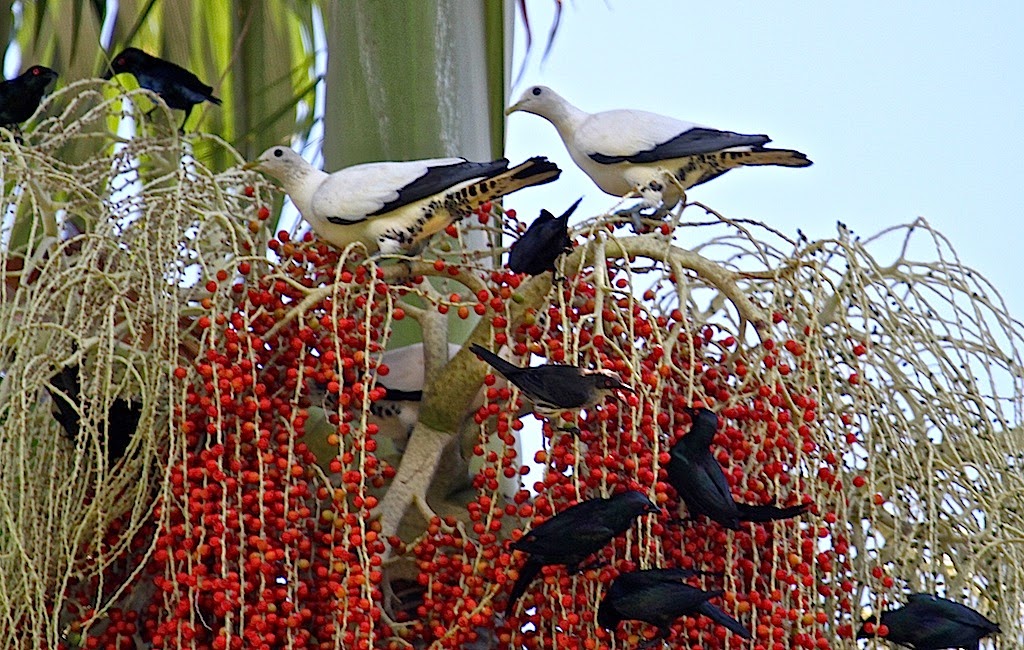 The Pied Imperial Pigeons and Shining Starlings are constantly feasting on the fruits of the Alaxandrae palm, Archontophoenix alexandrae.  These two species of migratory birds seem to feed together in harmony and I have never seen any aggression from either species. 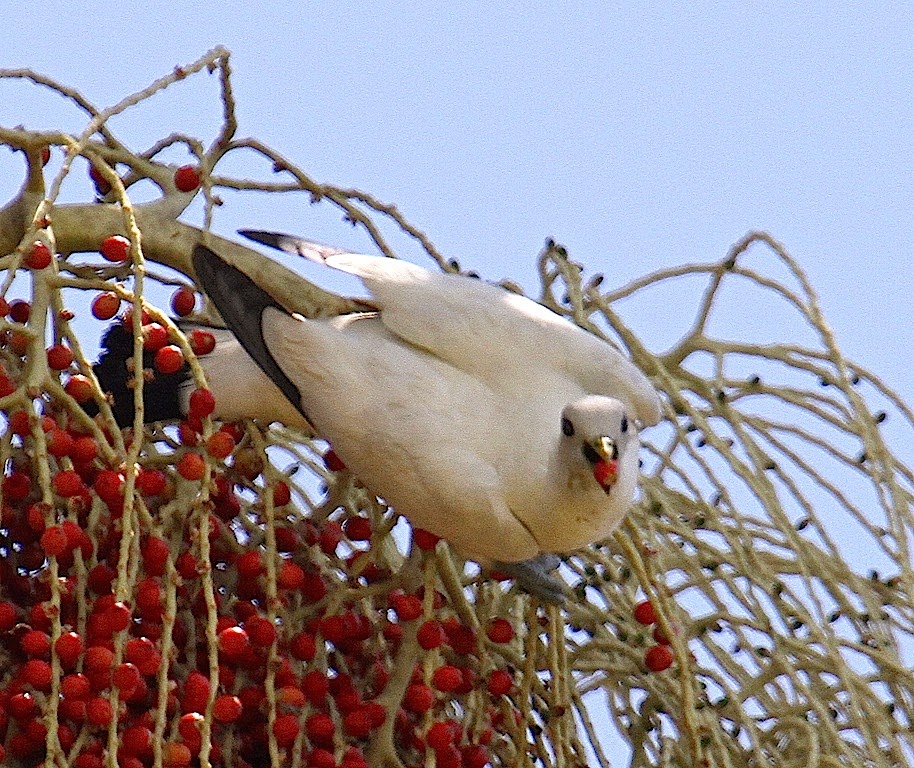 Once Alexandrae palms were a dominant feature of low lying areas around the coastal Wet Tropics, now very few Alexandrae palm swamps have survived development.  One such palm swamp in Innisfail has been preserved as a Conservation Park, it was donated to the people of Innisfail by the late Andy Carello and it is situated on the southern side of the Flying Fish Point Road. If you have the opportunity take a walk into Carello Park and marvel at the beauty in this very small remaining sample of the Innisfail rain forest landscape. 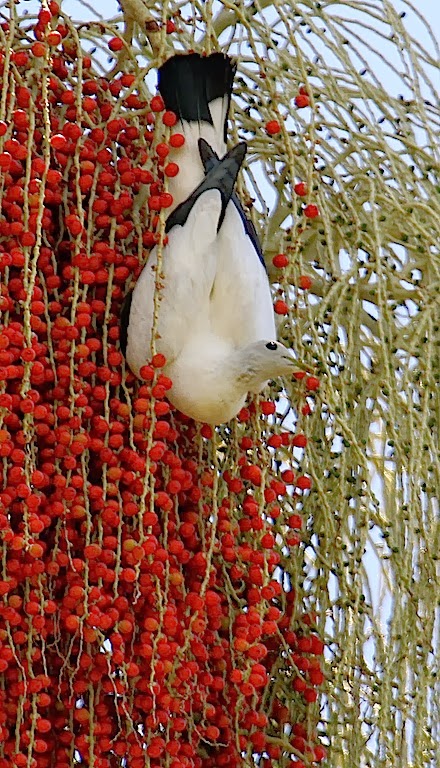 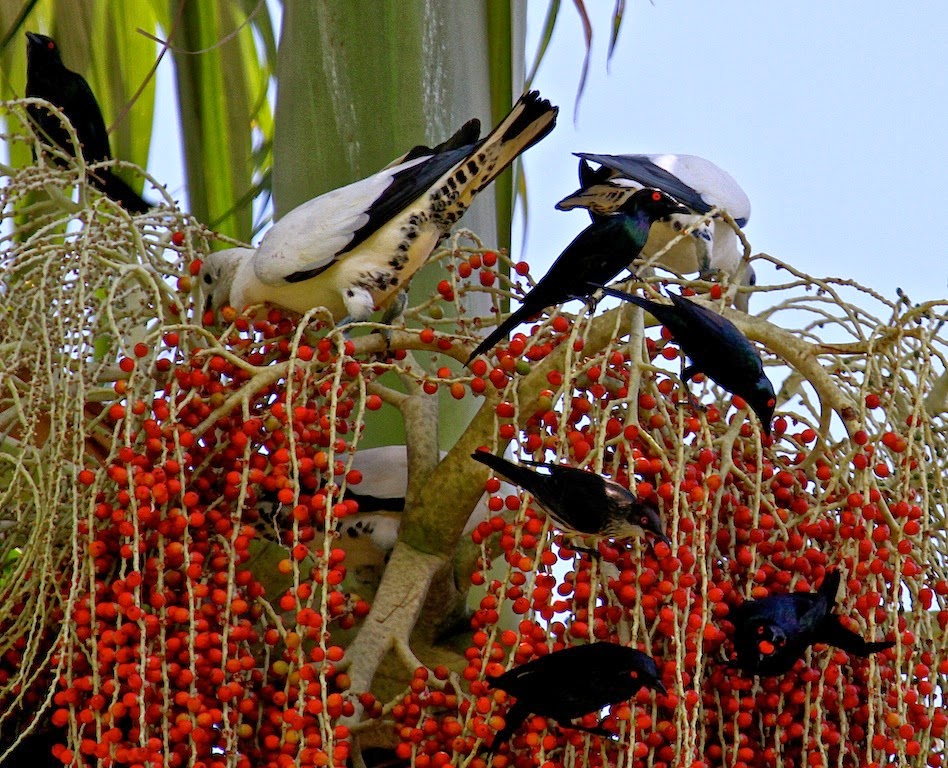 The Pied Imperial Pigeons clamber over the Alexandrae palm inflorescence with incredible dexterity. 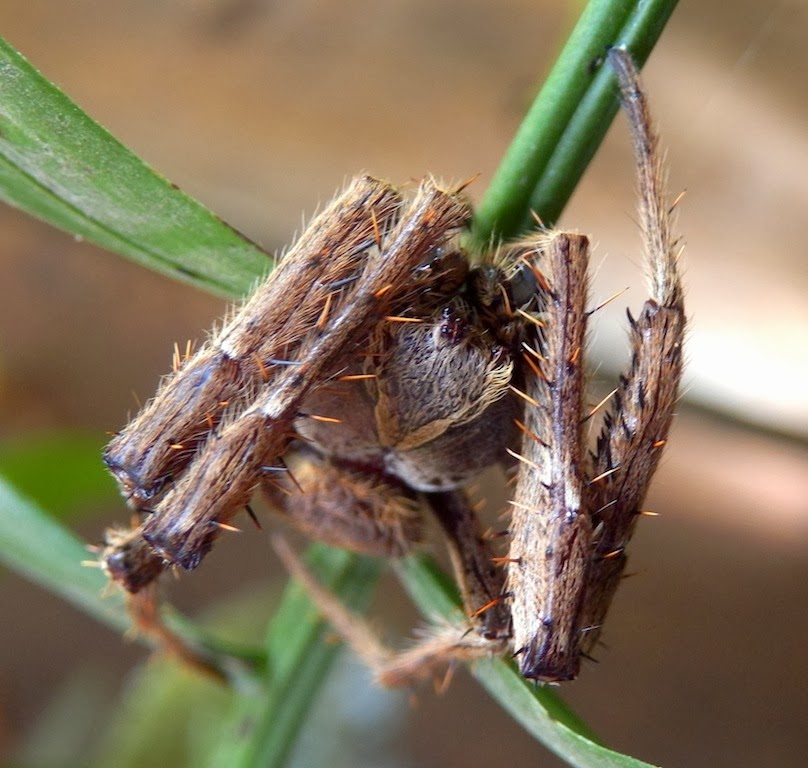 What would a week be without a spider or two and to keep Ruth L., our Coquette Point arachnid lover happy, I look for spiders to photograph most weeks.

This big fella was sleeping on a branch and I could not identify him so I sent a request to Rober Whyte, the spider man at Queensland Museum via Ruth and he kindly replied.
" You are right it is nocturnal, and you probably have seen the female quite often. It is Eriophora transmarina, the garden orb weaver, and this is the male It looks quite different sort of (from the female).

It will also make a web at night and take it down in the morning hiding in foliage nearby to do it all over again. Males are fairly rarely seen, as when adult they may not bother with a web at all, just on the hunt for a partner to mate with, then they lose interest in life and wander off, a bit bemused and befuddled, like most males."

Thank you Robert for this generous information. It just goes to demonstrate the difference between male and female of many species.  I had read a descriptions of the male garden orb weaver before and it had said the male was considerably smaller than the female, this spider however, was  at least twice the size of any female garden orb weaver spider I have seen. This is one hell of a big boy spider. 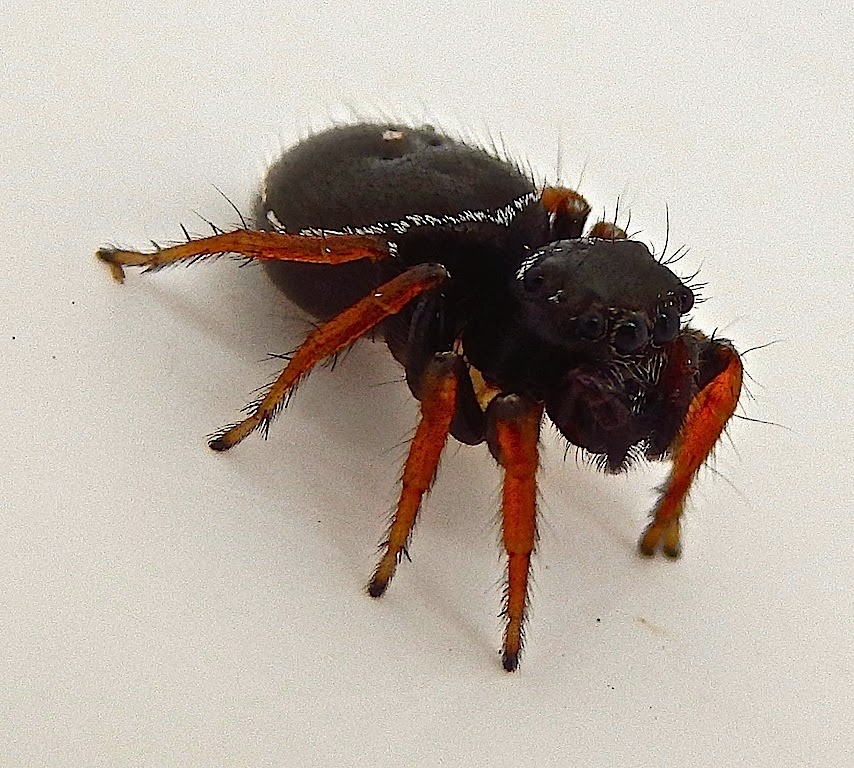 Lots of Jumping spiders around this week but no new species. However I had not seen a Zenodorus orbiculatus with red legs before, very cute with its contracting black body. 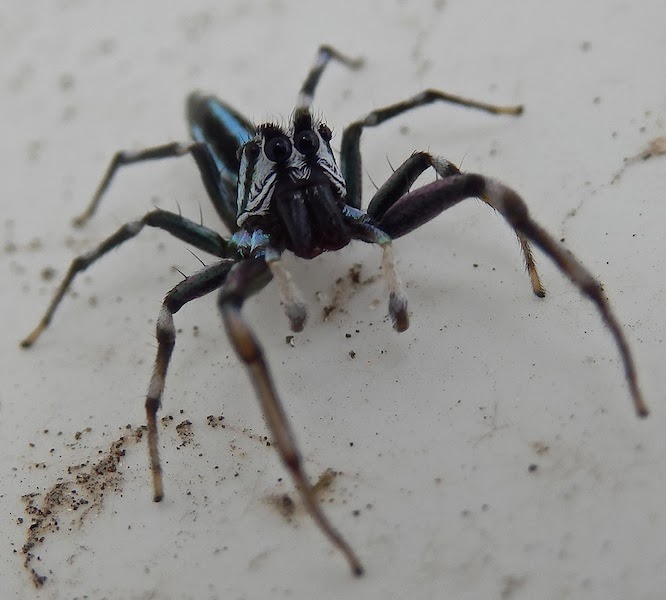 This week two cases of dengue fever have been confirmed in Innisfail. Since the rain mosquitoes are breeding out of control and we need all the help from Jumping Spiders and Dragon Flies to balance out the outbreak. Most of all we need to be aware of breeding sites around the home; blocked gutters, containers of water, palm leaves and so on. In Cairns there has been 74 cases of type one dengue fever confirmed and 17 in Port Douglas so it was only a matter of time before Innisfail had the first case.

If you do not like to use commercial mosquito repellent preparations you could try what I use.
Purchase one 750ml bottle of Sorbolene Lotion for sensitive skin, pour out approximately 50mls of the lotion from the bottle. This allows room to add the plant oils.
Add; 2mls of pure citronella oil, (only available from a pharmacy),
2mls of rosemary oil,
2mls of lavender oil,
2mls of tea-tree oil.
Shake the ingredients and apply to exposed areas of skin.
Remember everyone is allergic to something so test this preparation on a small area of skin to see if there is any allergic reaction to this combination of plant oils.

Another surge in the Monsoon is expected next week so you have a few days to clean up mosquito breeding sites around and, most importantly, inside the home before the next rain event arrives.