An active monsoon trough over Cape York and a south-easterly ridge are bringing showers onto the tropical coast and the frogs are loving it while the rain has triggered them into a mating and egg-laying frenzy. 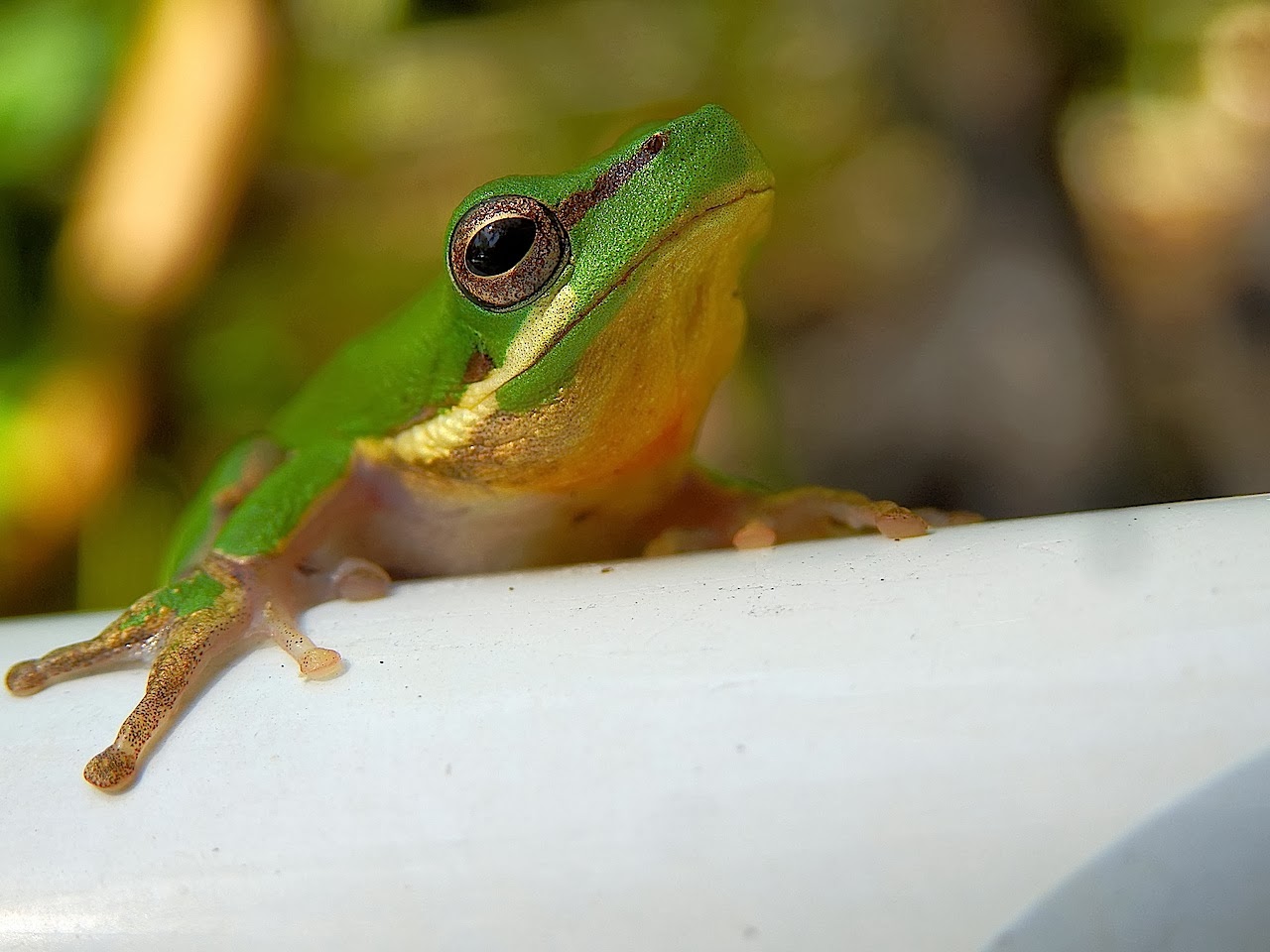 The male Eastern Dwarf frog has his eye on the female resting on a leaf above him. She has just hopped out of the water after laying small clumps of eggs on a partly submerged water-lily pad and he will quickly fertilise them and in the process the eggs will sink to the bottom of the pond. 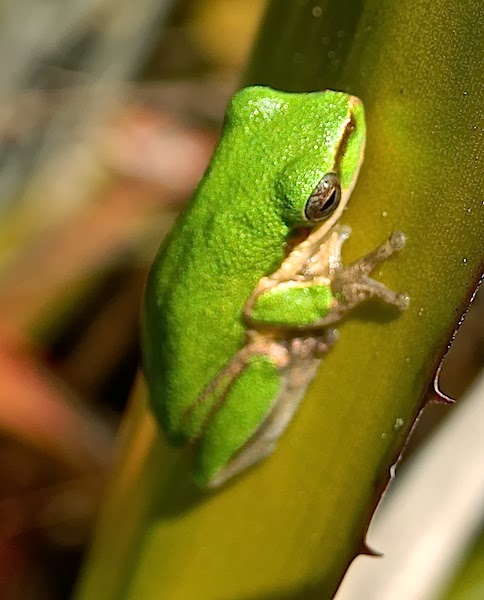 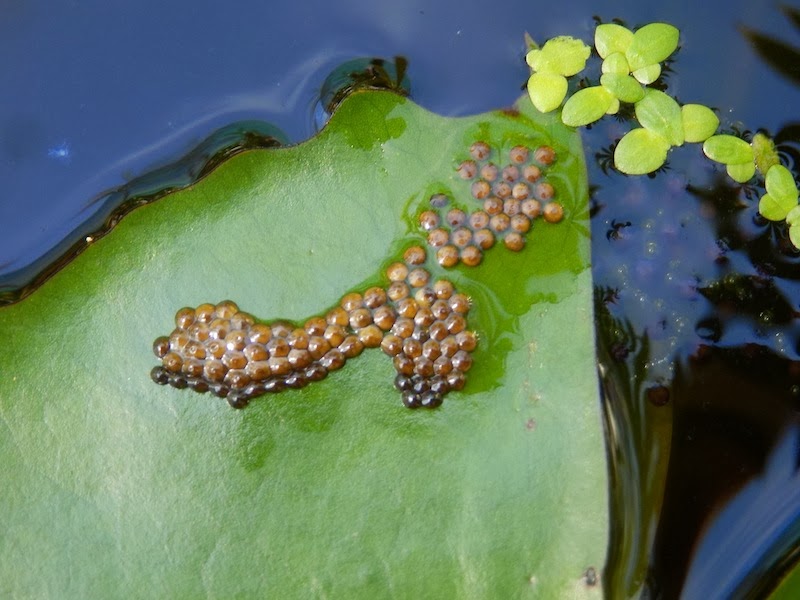 Tadpoles have already hatched from eggs laid last week in the same pond. 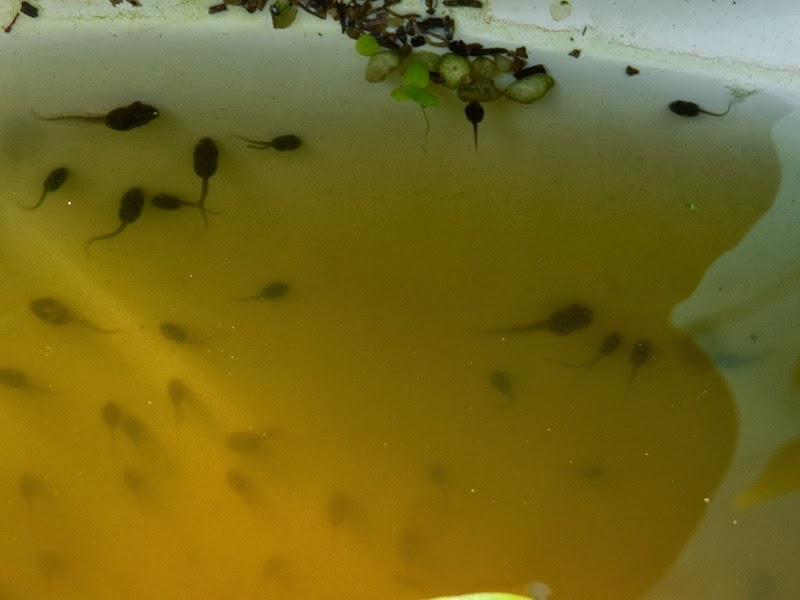 It is believed these little frogs can reproduce when they are two years old. 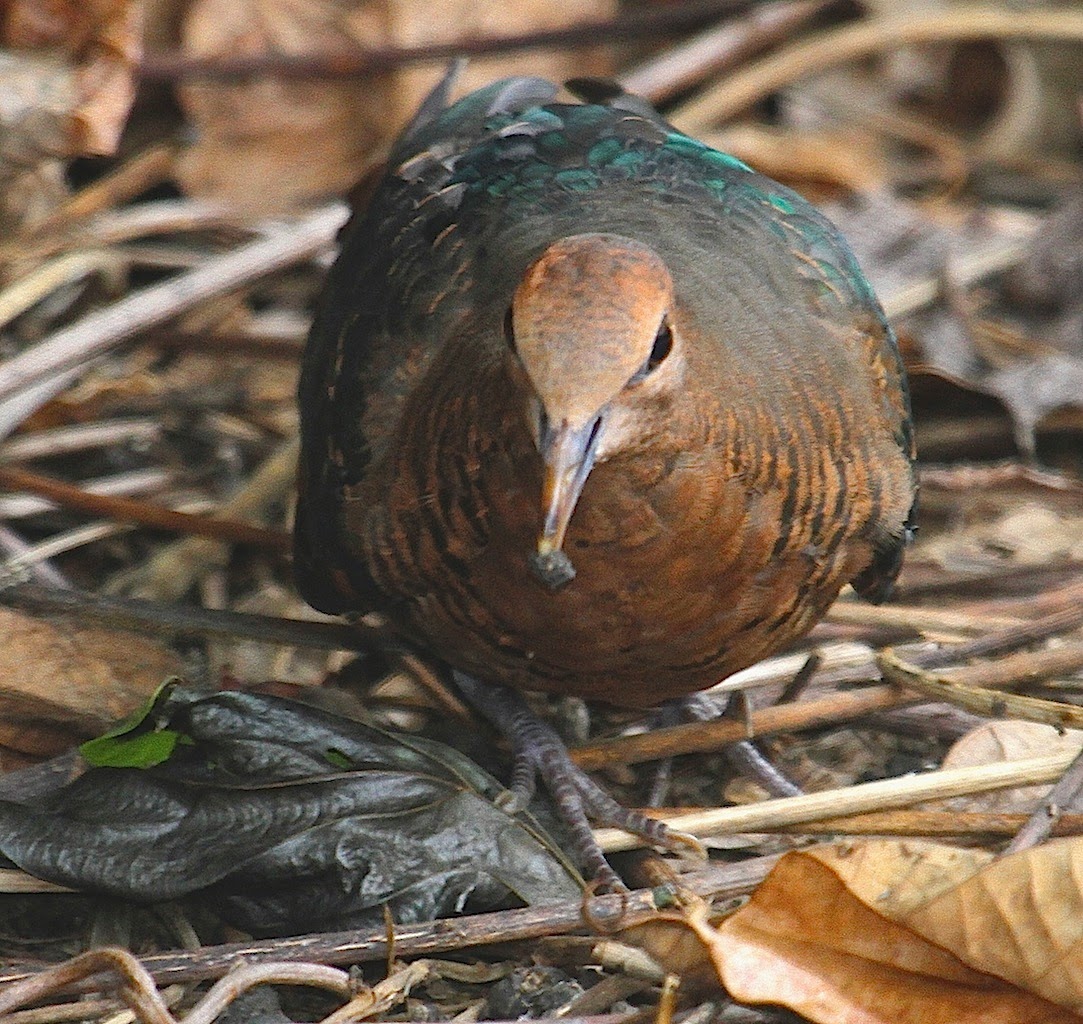 A lone juvenile Emerald Dove has remained in the nursery grounds while all the mature Doves have departed for the Tableland's rain-forests.

The little Dove has an abundant food supply of Macaranga tanarius seed and can fill its crop in minutes from the trees around the nursery.

Since the adults left the juvenile has remained silent and the soothing coo-coo is missing from the undergrowth. Only the rustling sound of dried leaves can be heard as the dove forages in the under-storey. It will be interesting to see this little bird mature or if  on the other hand it also departs when the monsoon, wet season starts. 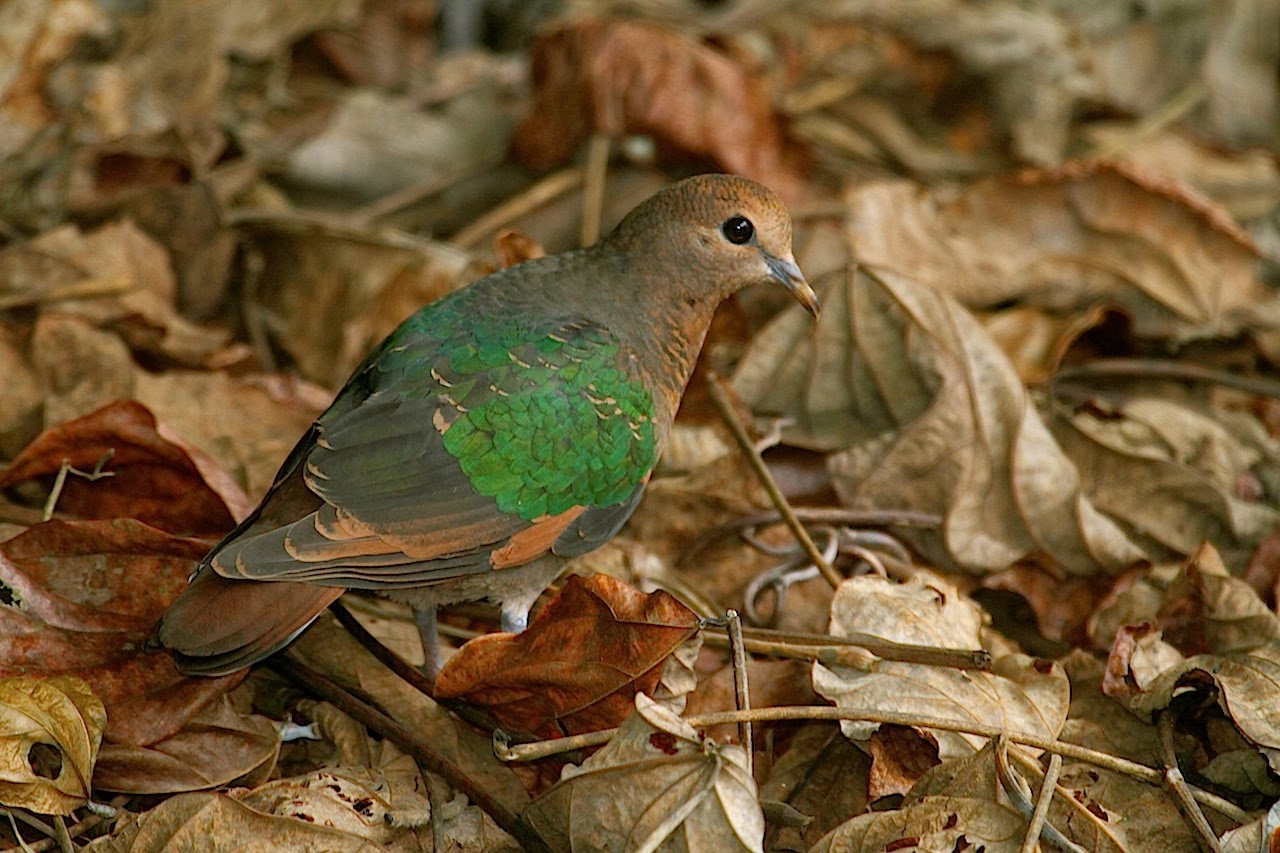 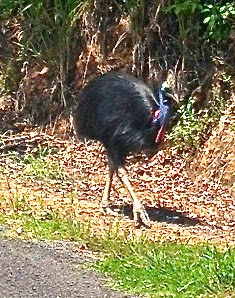 Cassowary Haygar, who was known as Little Dad has lost his chick. I did not get a photo of it however there were several sightings. This week he was seen walking alone without the chick.   Debbie Lewry kindly sent me this photo of Haygar which she took on her phone. No one can tell what happened to Haygar's chick.

Haygar has been a successful father and I found some old photos of him for the record.

He turned up in the nursery with two brown chicks on the 3 February 2011 following cyclone Yasi. 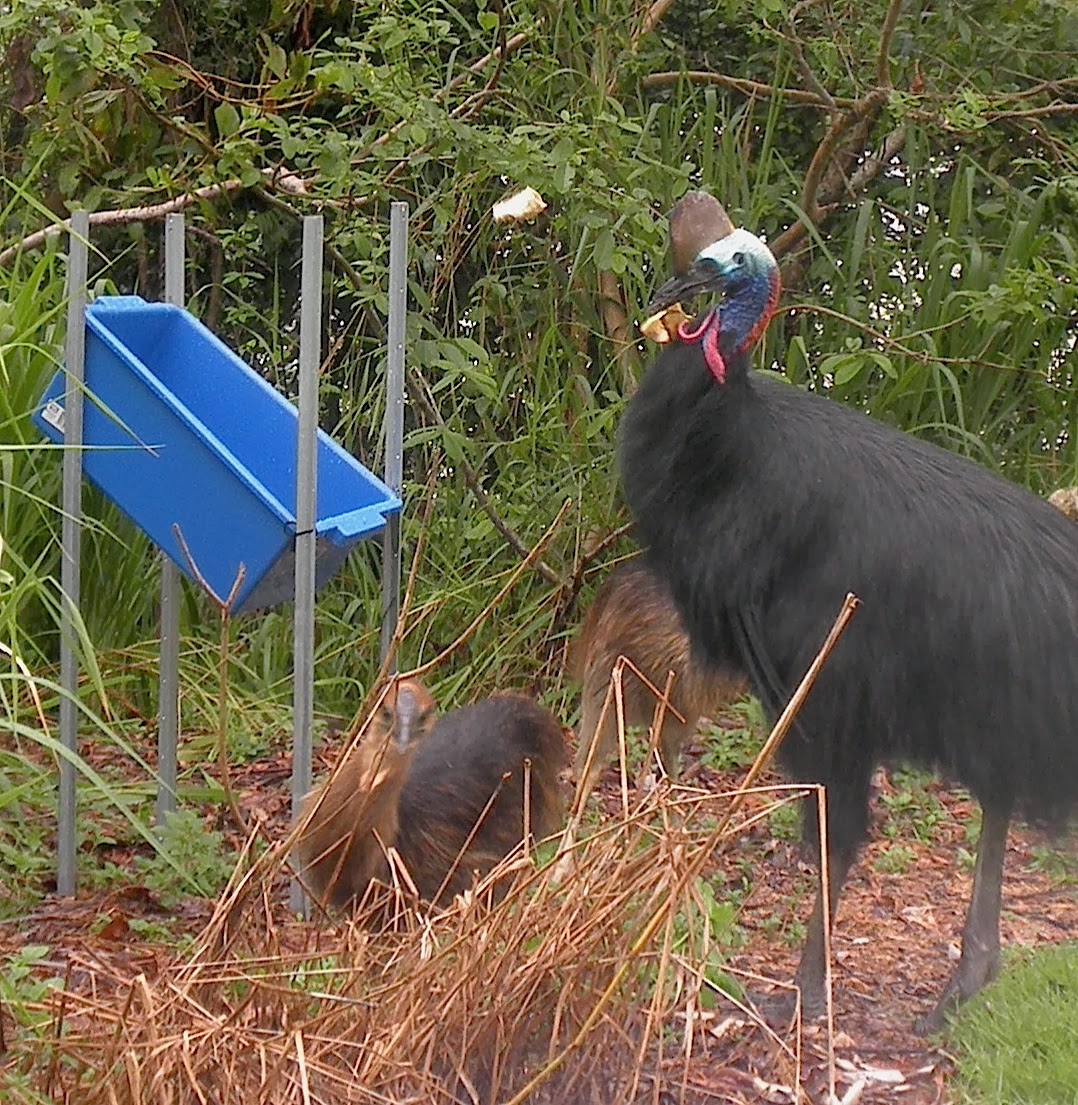 The Queensland National Parks and Wildlife Service provided feeding stations for the cassowaries after the cyclone.  Hagar would take the sliced bananas from the bin, peel them then toss them onto the ground to feed the chicks. I named the chicks Don and Q.

The chicks grew quickly thanks to a regular supply of fruit which supplemented what they could find in the cyclone battered rainforest. 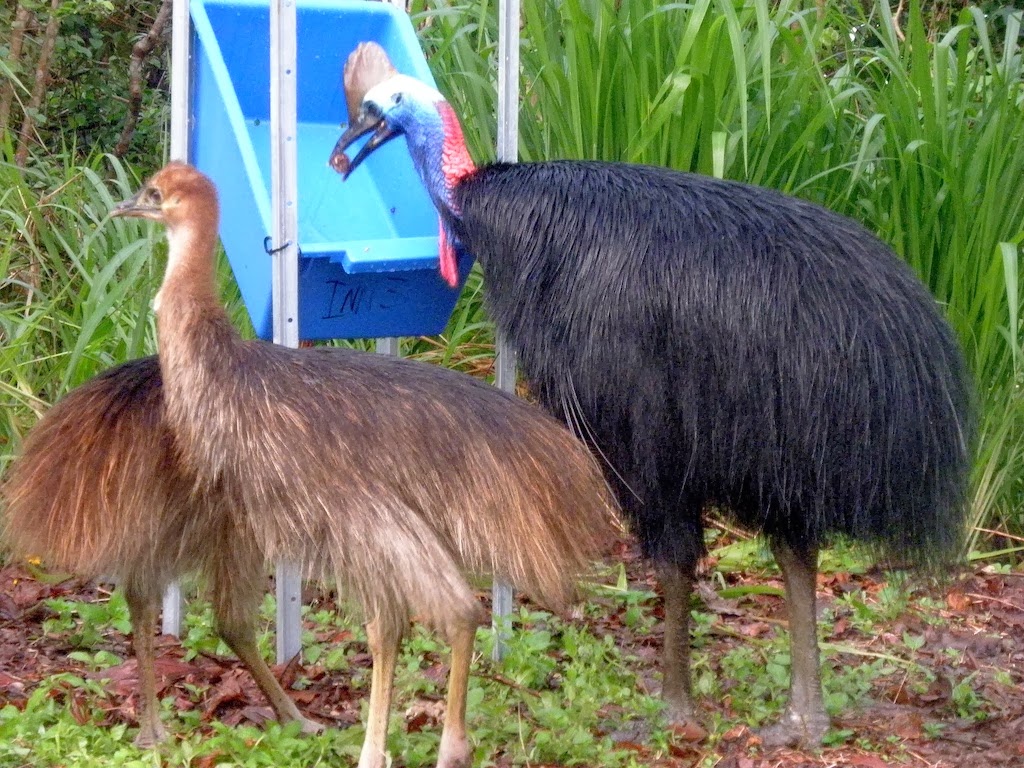 Soon the Matriarch cassowary Jessie was hanging about and Hagar couldn't resist. He left the chicks as they had grown into strong sub adult cassowaries. They had been taught how to forage for food and they were soon fending for themselves. On the 7 April 2012 Hagar started courting Jessie. 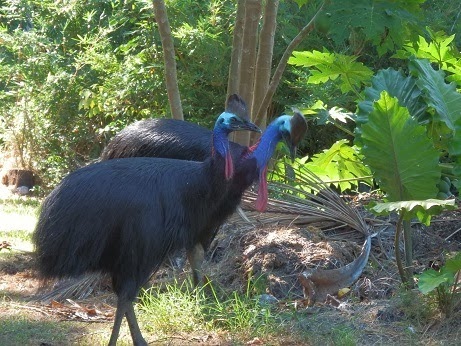 I next saw him on the 11 September 2013, photo below, he had one large chick. There has been no sightings of the chick since that time. Incidentally this was the only cassowary chick, at Coquette Point, recorded to reach sub-adult stage in 2013.

Now it appears Hagar has lost his 2014 chick. 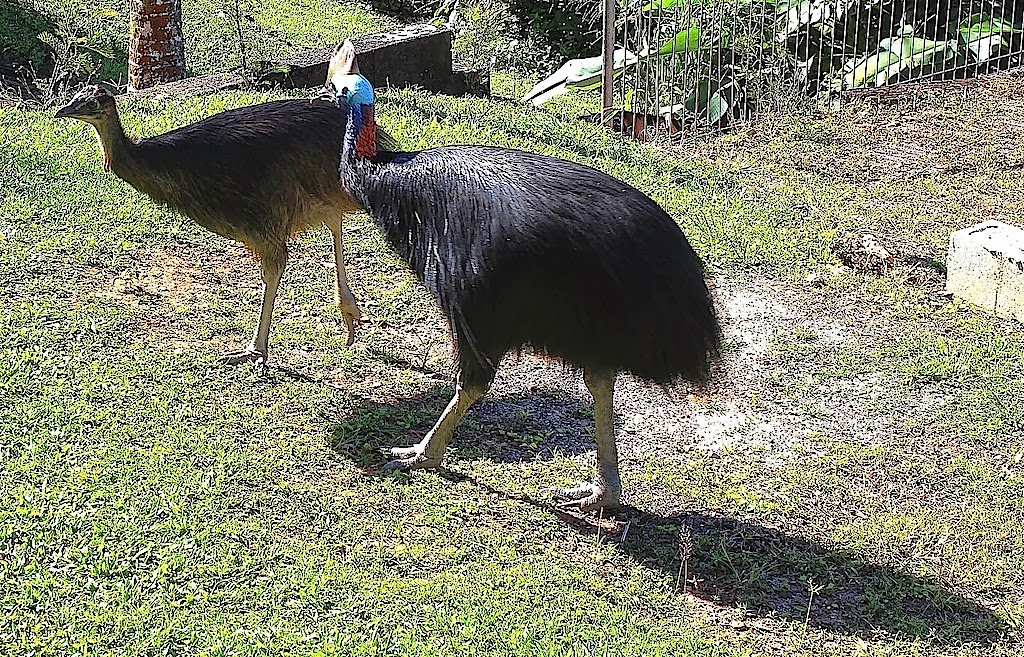 I have no recent sightings of Brown Cone and his chicks and the only chick reported seen this week at Coquette Point was Snout's chick. 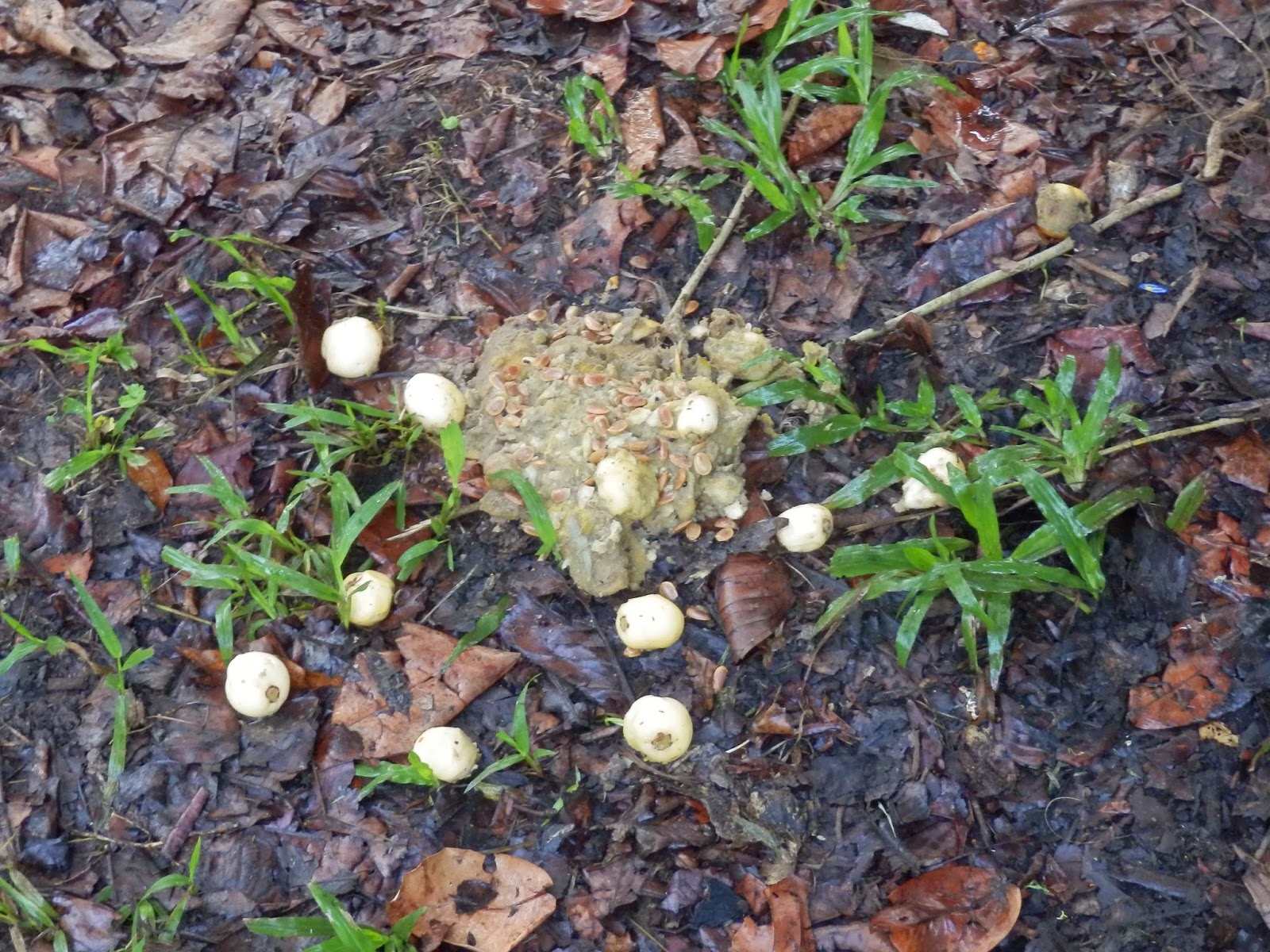 Snout and the chick this week are feeding on pond apple, white apple, damson plum, pandanus and Alexandra Palm fruits.

The chick is growing quickly and keeps in step with Snout wherever they go. 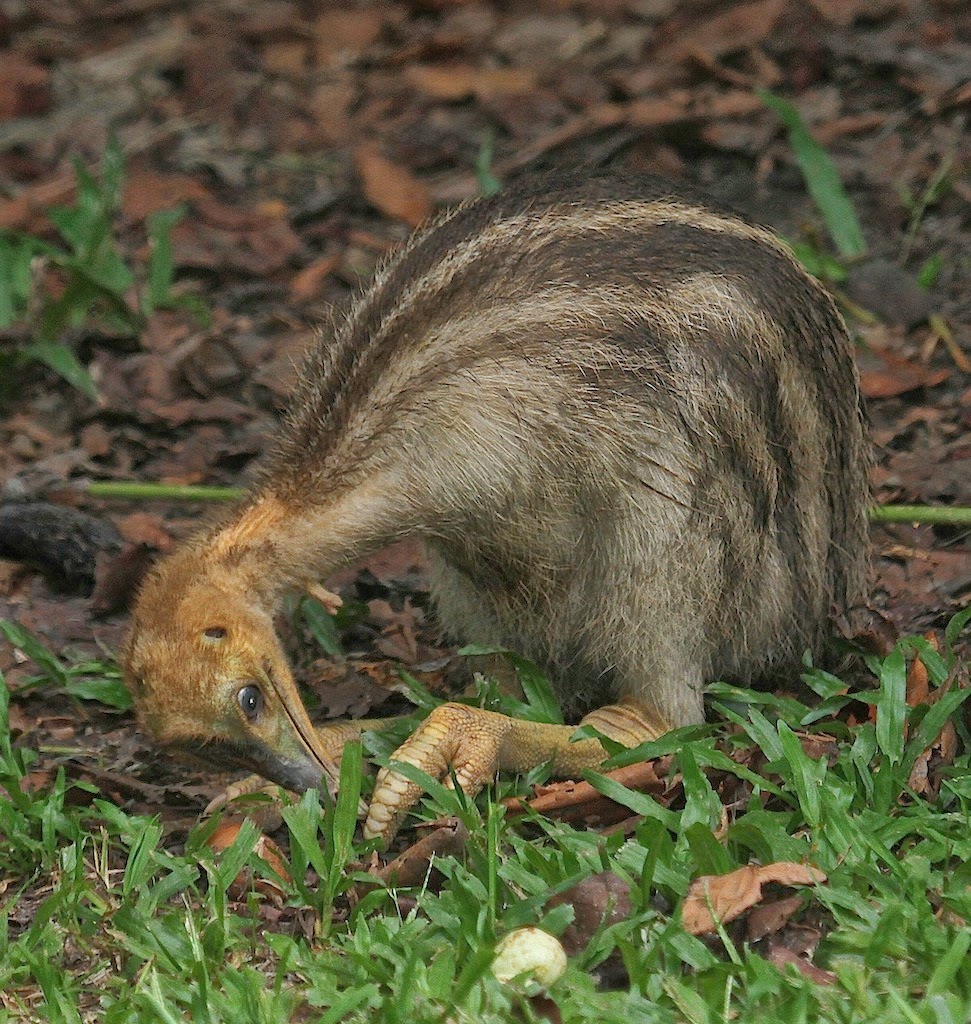 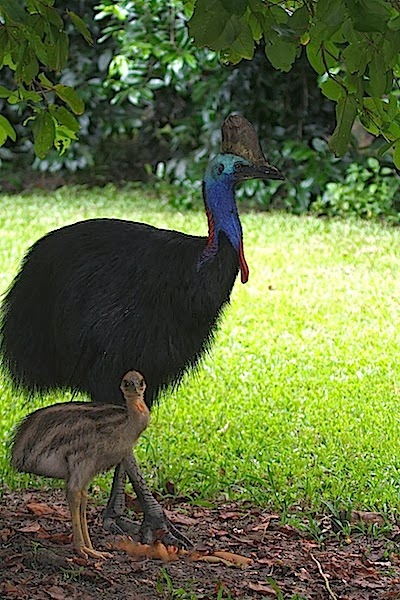 His feet seem to hold some fascination and when resting he continually pecks at them; perhaps a
Cassowary pedicure. 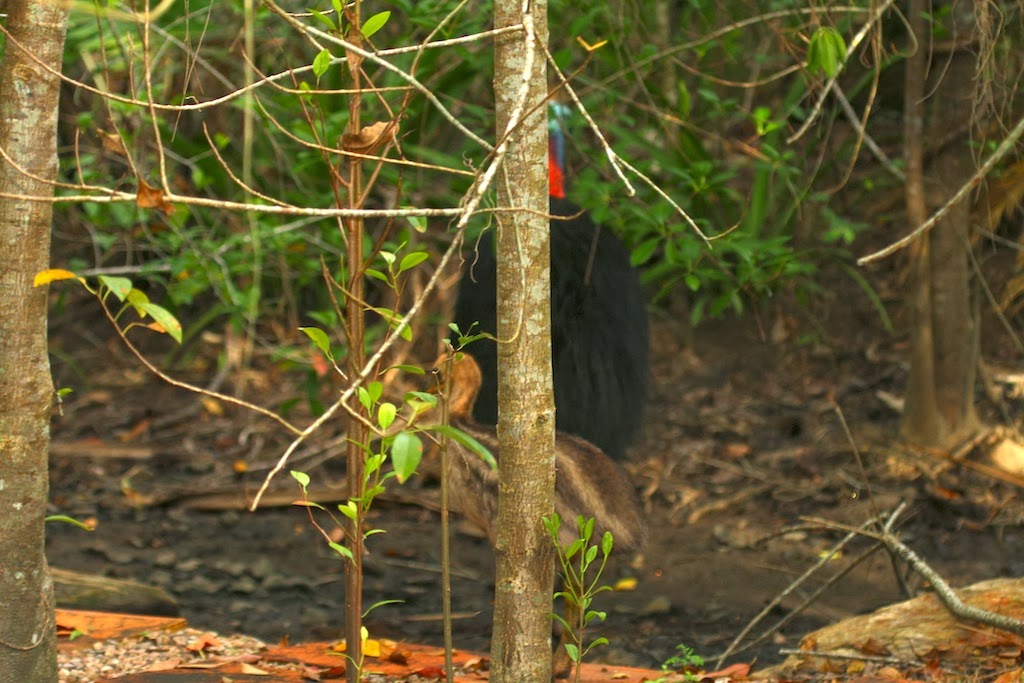 Poor Q has been displaced as this week Snout has extended his range into Q's territory - the mangroves.

It is fascinating to watch the chick negotiate the mangrove root-obstacles and it seems to easily do this and keep up with Snout.


The Pied Imperial Pigeons have added a feast of ripe Alexandra palm fruits to their diet. 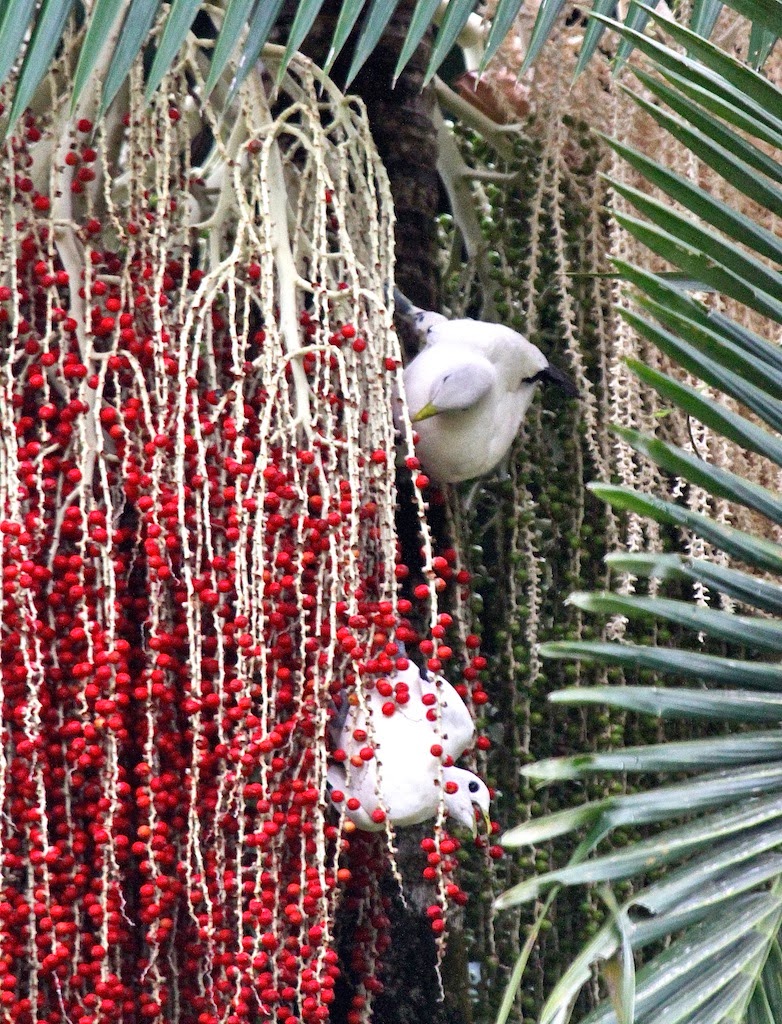 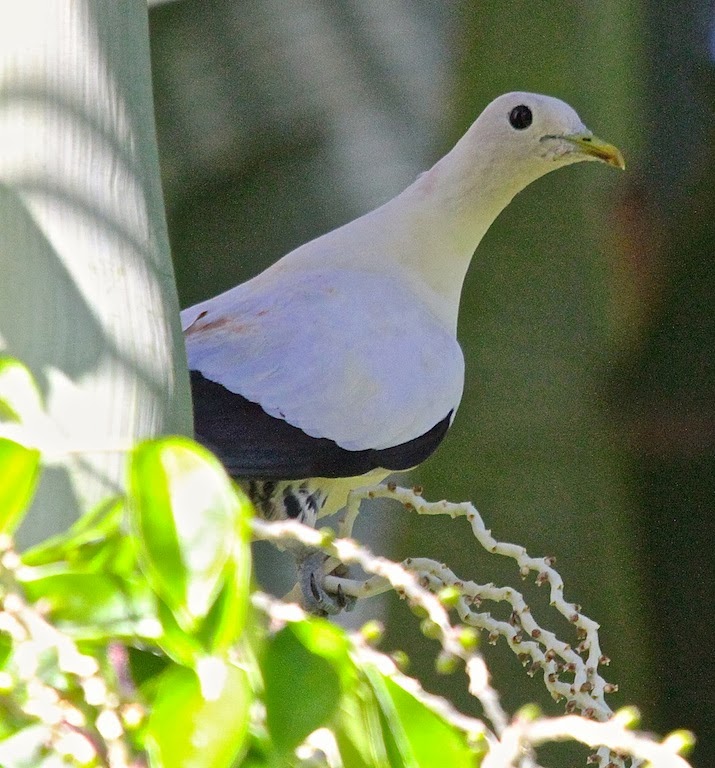 Although they are still feasting on the Damson Plum and at times  coming into conflict with the Shining Starlings.  I watched a discussion between two Shining Starlings and a Pied Imperial Pigeon in a Damson Plum tree. Unfortunately, I could not understand what they were saying. Perhaps you could make a suggestion? 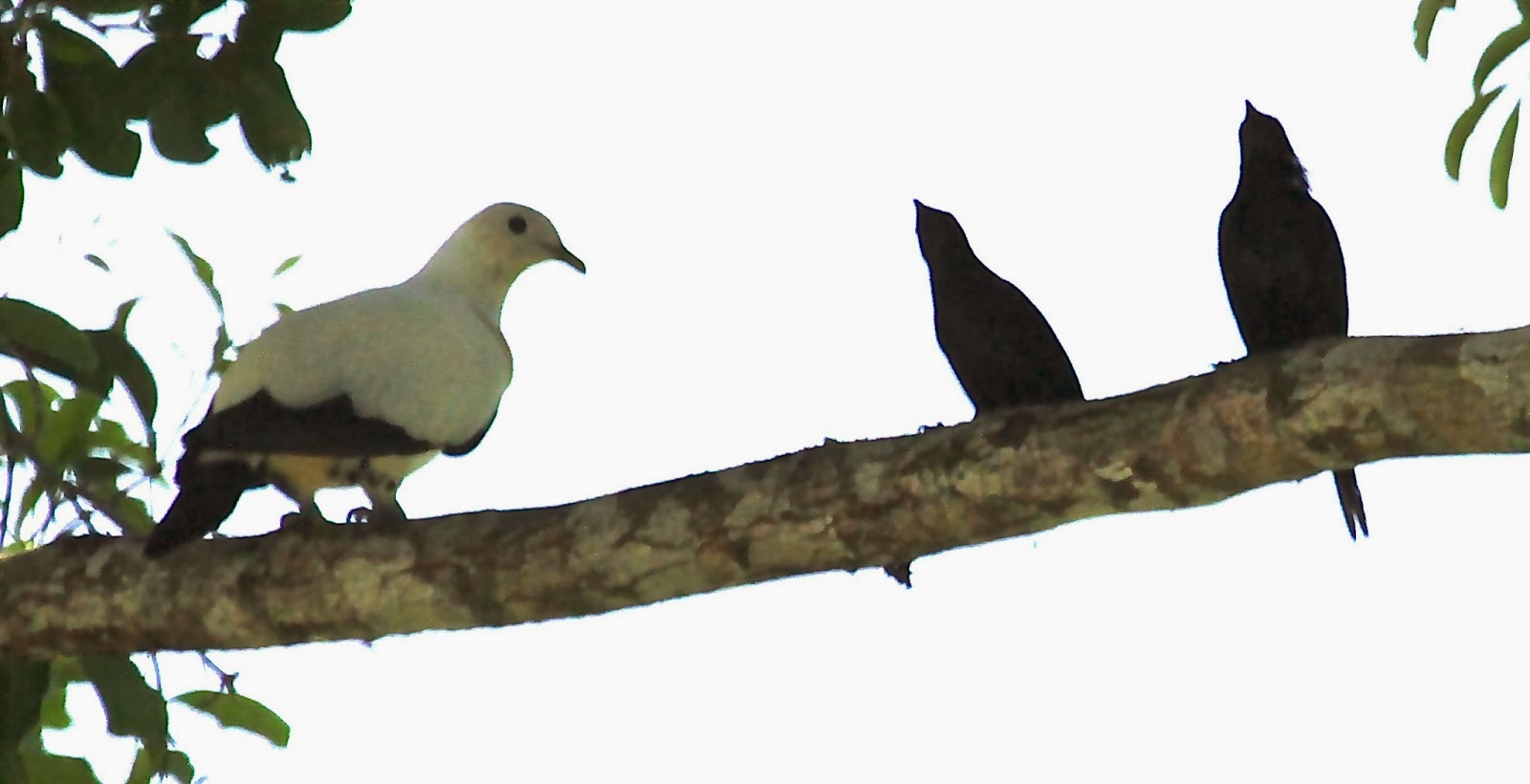 The upshot was the Shining Starlings left and the Pigeon remained to feast on the Damson. 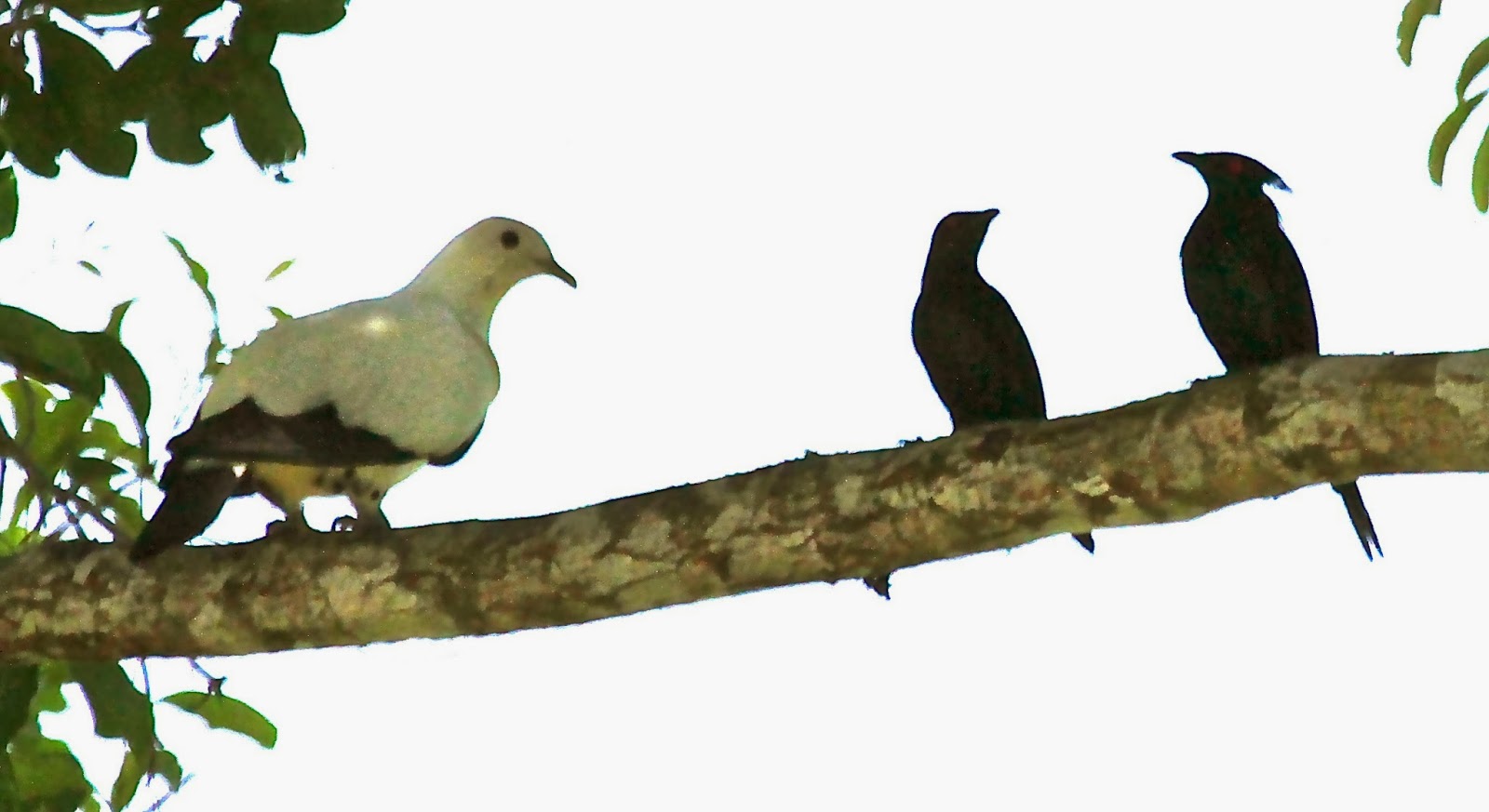 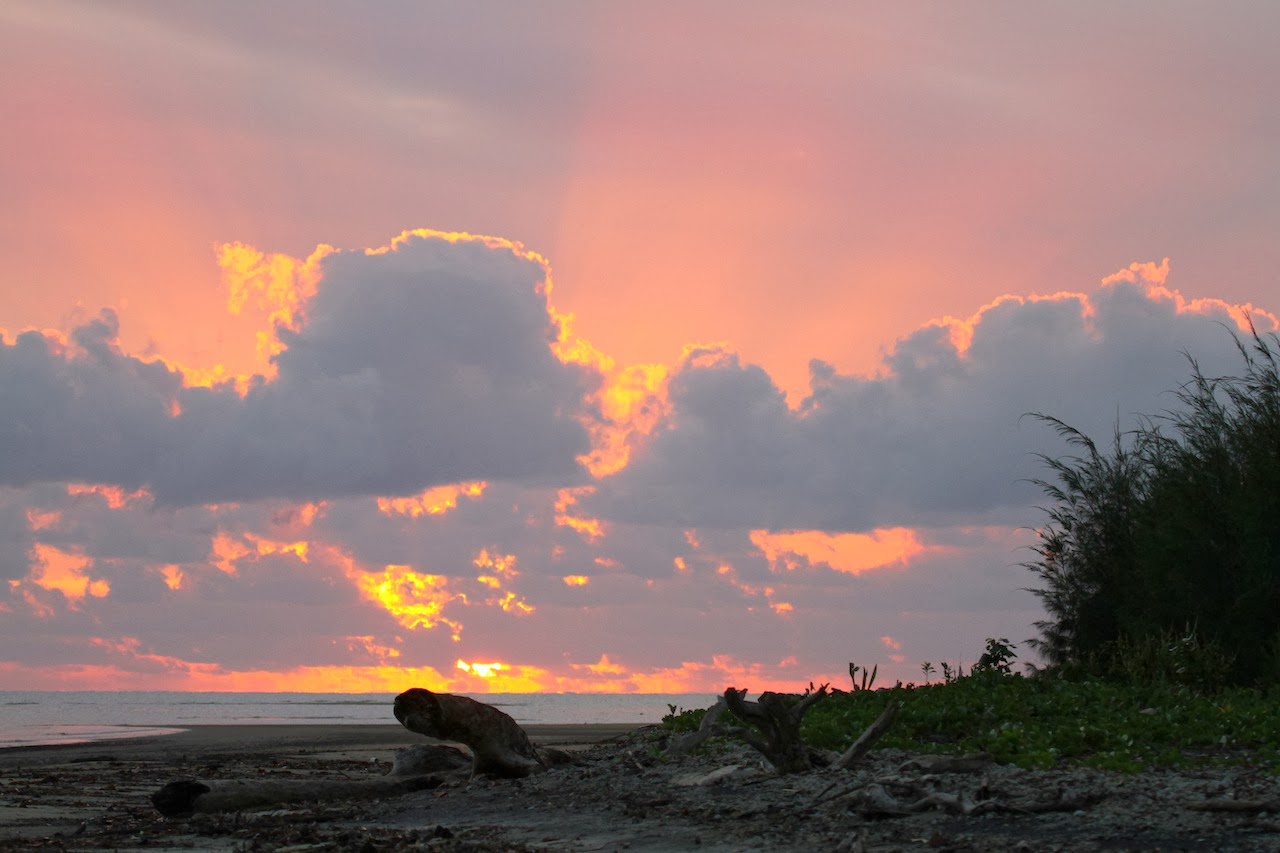 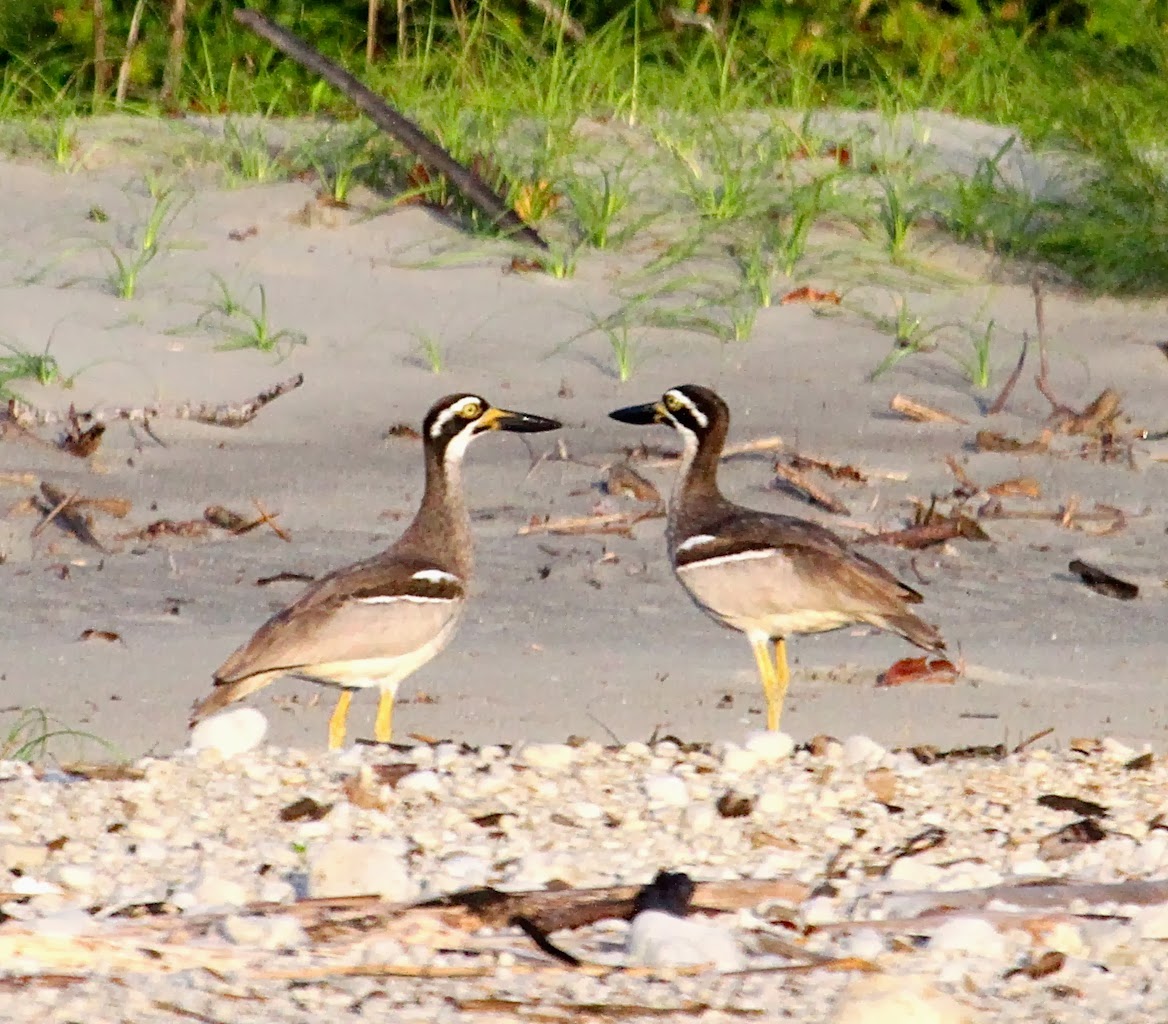 The sunrises have been spectacular most mornings this week. I was up early looking to see if the Little Terns were nesting and although I saw six little terns fishing in the estuary none were nesting on the rookery.  This is the first year that Little Terns have not nested at Coquette Point, perhaps in thousands of years. The reason for this I believe is because people are walking over the rookery and often with dogs.

There has been a failure to place interpretative signs on the rookery area. At the entrance to the walking track where there is a sign saying,  'NO DOGS', ignorant people are ignoring the sign.

I saw two Beach Stone Curlews dancing on the dune in the early morning light. 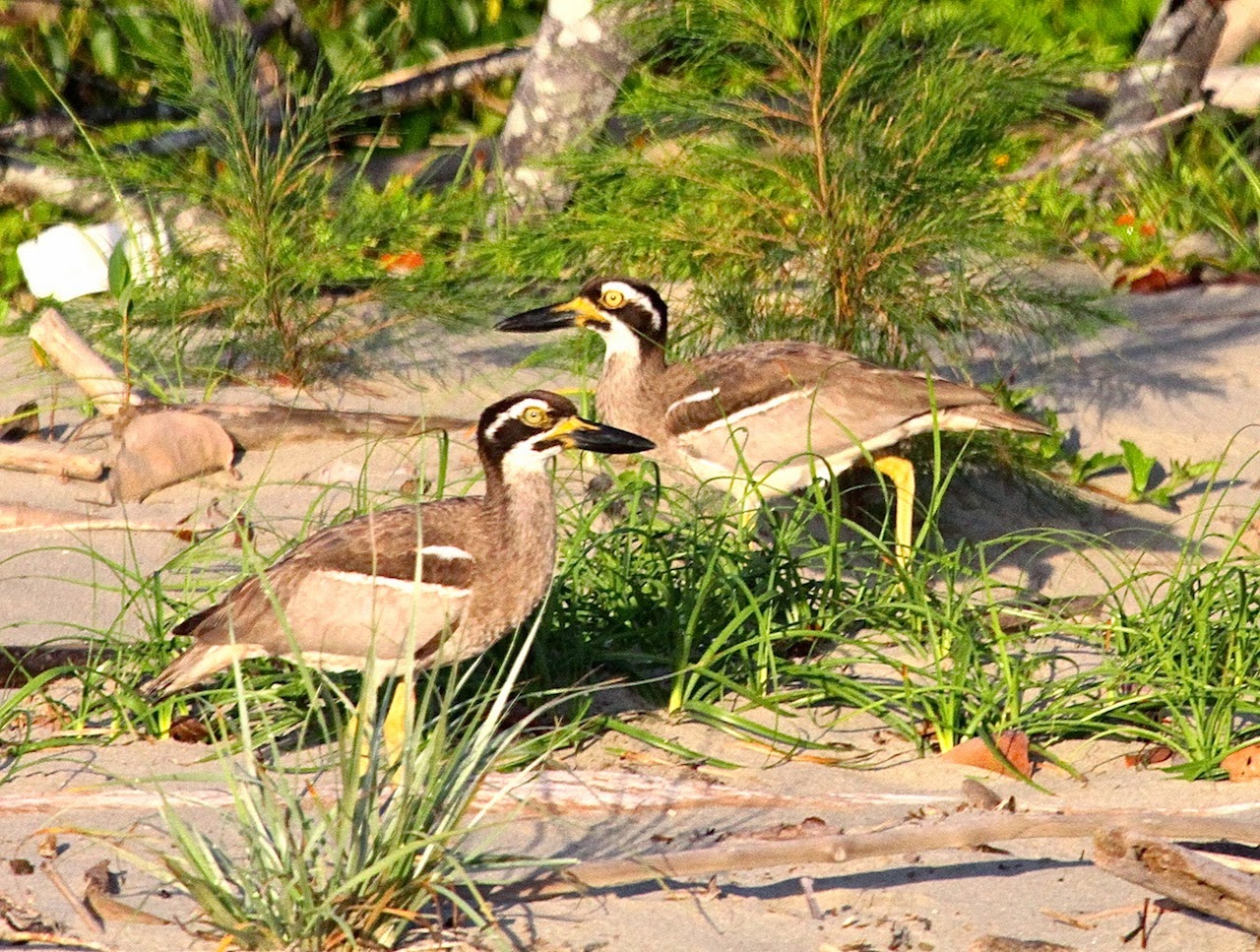 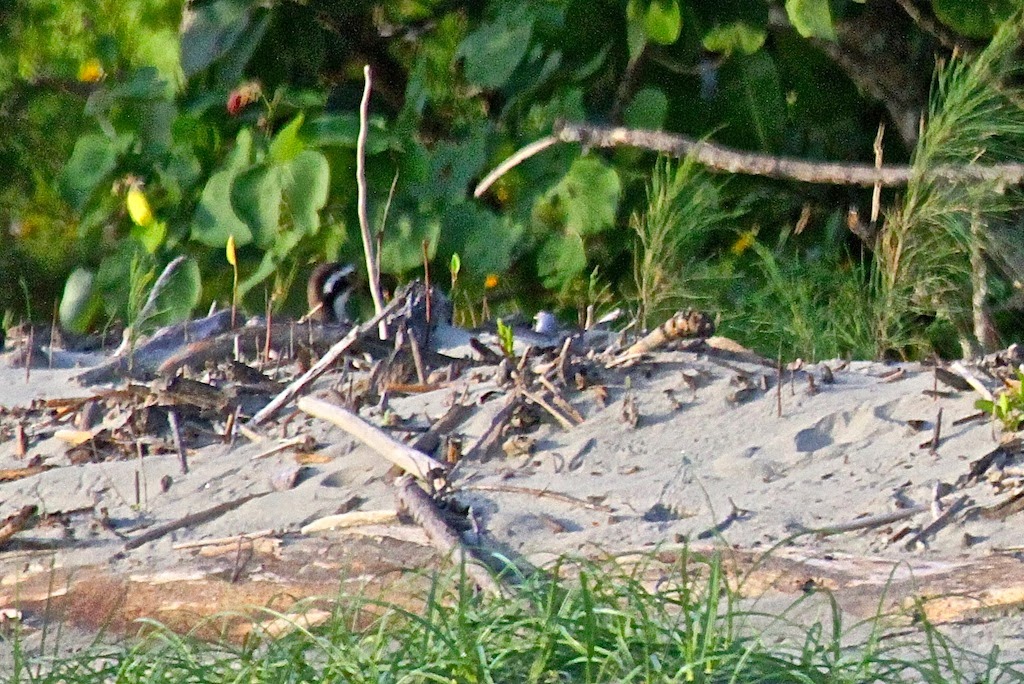 Behind the dune another Beach Stone Curlew looked as if it was sitting on eggs. I did not go closer and you can just make out the bird's head above the sand. 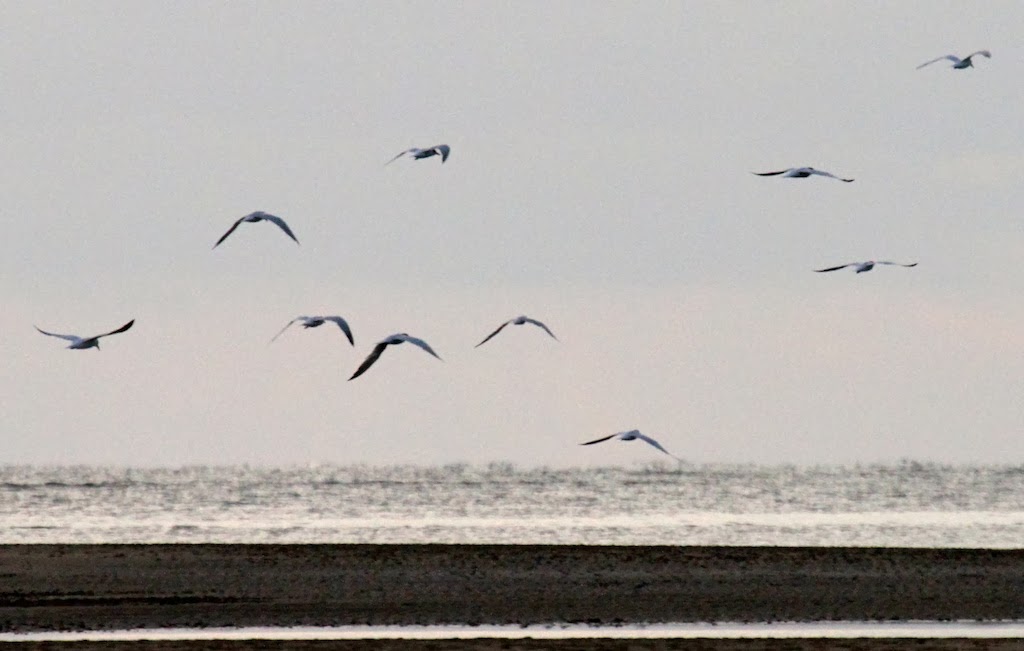 Overhead several flocks of Whimbrels flew past me and up the river to the wetlands in the hinterland of Innisfail. I watch them every morning they are the first to move from the rookery area. In the evening they are the last to return.Then the Gull Billed Terns left the sandbar and beach and also flew into the hinterland swamps.  This clearly demonstrated the connectivity between the wetlands of the Johnstone River and the estuary. Many birds use both areas, one for roosting the other for feeding. 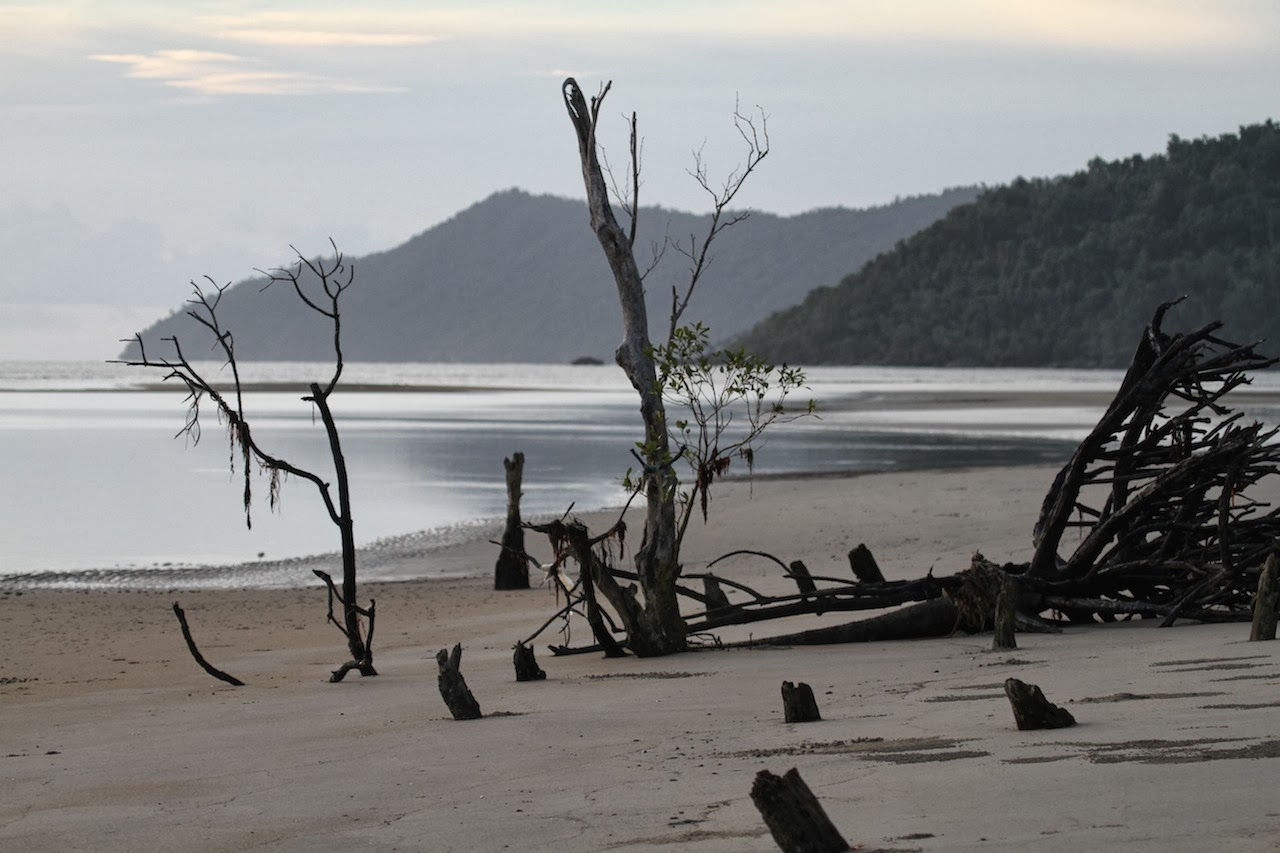 Most mornings this week the land breeze did not eventuate and an oily calm settled over Glady's Inlet.

Once the sun rose the sour-easterly pushed up the coast. 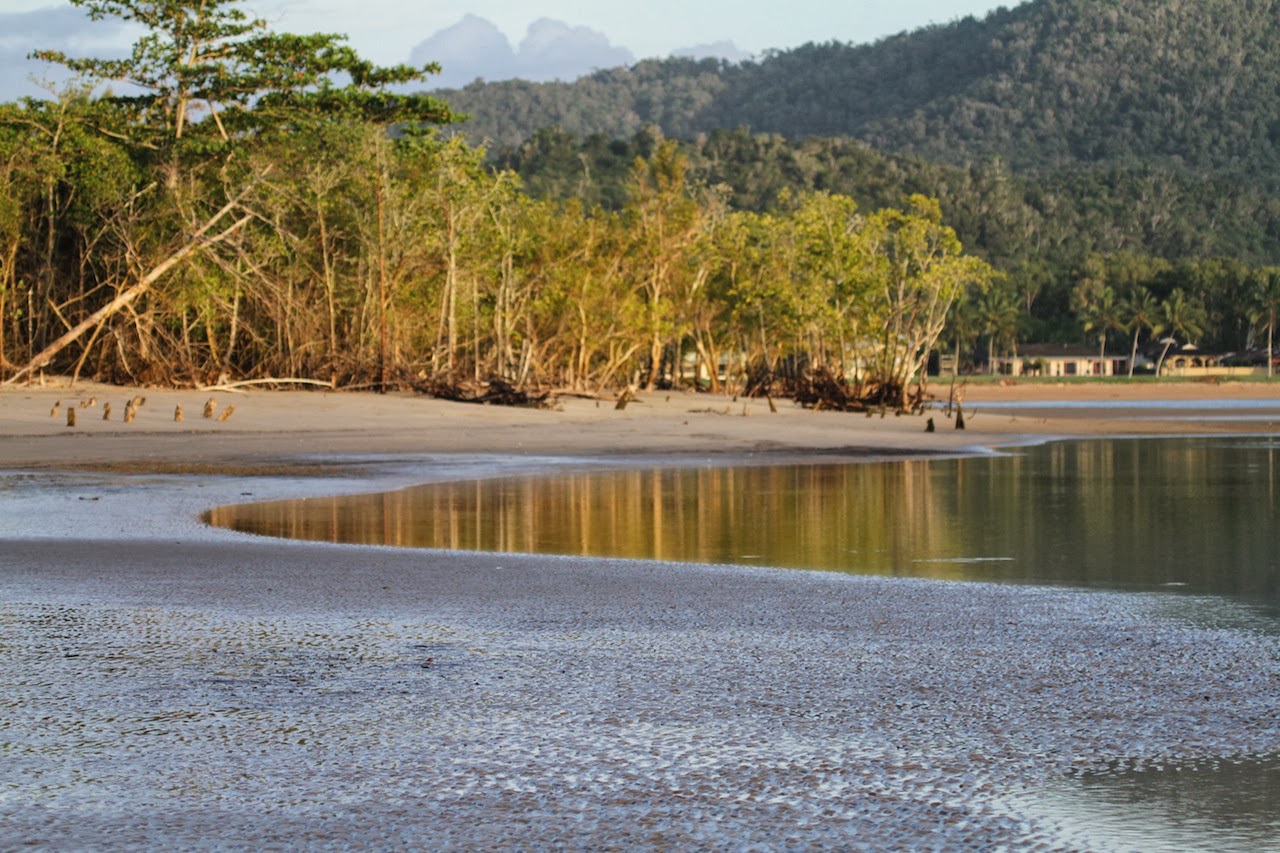 At the moment there is a low in the Coral Sea, off the Solomon Islands and tonight the Bureau of Meteorology has issued a warning that this low will quickly travel westwards and cross the coast between Cairns and Cardwell on Thursday.

It is expected to develop into a low category cyclone before it crosses the coast. Gale force winds combined with King tides all this week will cause severe erosion on exposed beaches.
So here we go again, do a clean-up and batten down the hatches! 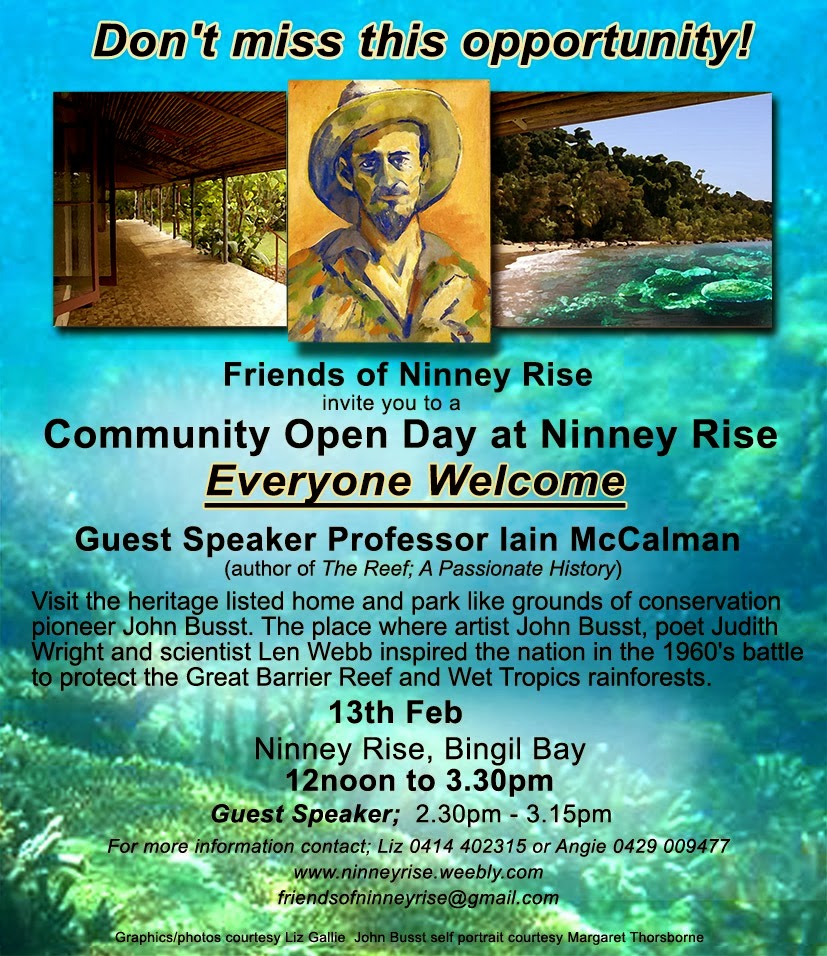 If we're still all ship-shape please come along to Ninney Rise at midday on 13 February at Bingil Bay. Have a look at John Busst's old home, listen to Professor Lain McCalman tell the history of Ninney Rise and support the campaign to have the property remain in the communitie's hands.

All the best and stock up the cyclone stores - just in case!