Hello from the mouth of the Johnstone River,

In the wee small hours of the 9 June 1770 Captain Cook sailed just off the Cassowary Coastline without seeing the mouth of the Johnstone River. It wasn't until 26 February 1872 when the Brig 'Maria', on a voyage to New Guinea, struck a reef off Kurramine Beach and two rafts carrying survivors of 'Maria' entered the wide estuary of the river that the area became known to Europeans. When Lieutenant Johnstone was sent in search of survivors of the shipwreck he was the first European official to see the luxuriance of the rainforest vegetation and the volcanic soils of the Johnstone River Valley. It was Lieutenant Johnstone's report that brought a rush of European settlement to this Mamu Country. The Government of the day encouraged Europeans to farm sugar cane and tropical produce in this 'new' area and by so doing the Aboriginal peoples were displaced from their lands.

One hundred and forty-one years later the five clan groups of the Mamu people of the Johnstone River  have been handed back their Native Title. The determination of Native Title was handed down by His Honour Justice John Alfred Dowsett AM, Judge of the Federal Court of Australia to the five clan groups of the Mamu people on Friday 1st November in Innisfail.  This occured at a special court hearing convened at the Innisfail Shire Hall and attended by over 350 Mamu elders and family. 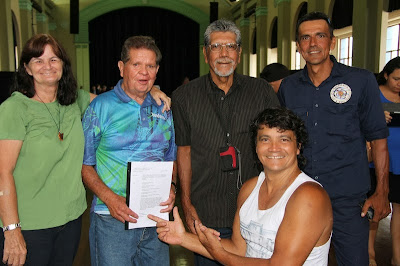 I spoke to James Epong who led the procession of Mamu people through the streets of Innisfail to the Shire Hall and James spoke of how proud he was to lead the procession and how it made him feel to be handed Native Title. " We now have the freedom to gather on our country, in our special places, to teach our children the lores so they can understand their country".

Jame's son Jamee told me, " I now feel I have a secure future. We will have land to build a house and go to our special places without being harassed. We have come to the end of a marathon race and won." 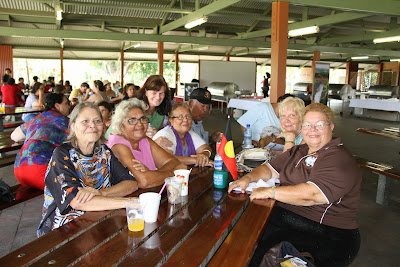 NellieEpong with 'The Aunties' at Warrina Lakes where the celebrations continued all afternoon. 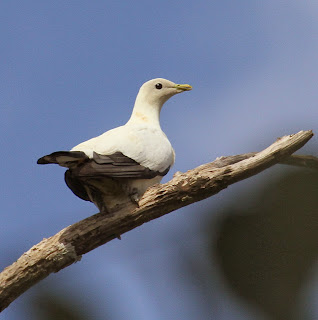 Many people this week have been counting Pied Imperial Pigeons, PIP's.

Here at Coquette Point Ruth L. and Diana O'B. volunteered to do the count as they both live at the top of the Moresby Range with a vantage out over the Coral Sea. 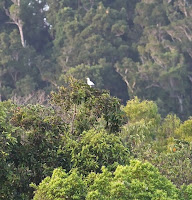 Ruth had a high count of 39 birds on one day and a low of 9 on another. Ruth noted that the birds she saw appeared to come into the mangrove/melaleuca forest to roost at night. This tallies with my early morning observations when I have seen the pigeons suddenly pop their heads up out of the trees and fly off to feed in the Moresby Range National Park.

The PIP count was commenced by Arthur and Margaret Thorsborne who were the first to raise concern about the dwindling numbers of these extraordinary birds. Margaret T. sent me the numbers of PIPs for November 2011, after cyclone 'Yasi', when only 2433 birds were counted. However, last year the count was up to 17931, during November. You can follow the count or join in at  www.pipwatch.net 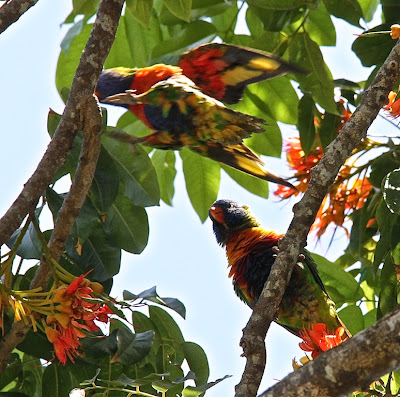 The rainforest is aglow with the flowers of the Blackbean tree, Catanospermum austral, and the noisy feasting of the equally colourful rainbow lorikeets. If you see a Blackbean in flower be sure to stop and watch the antics of the birds amongst the blossoms. 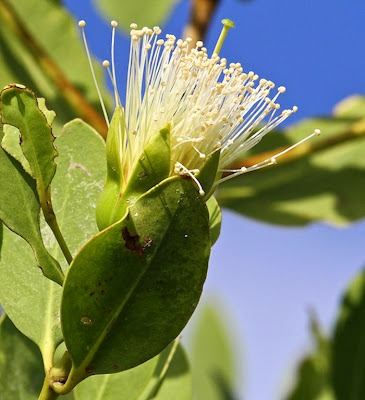 In the mangroves the ephemeral flowers of Sonneratia alba are opening to the starlight. By sunrise their pure white stamens have fallen to cover the black mangrove mud. You need to be an early riser to see this rare beauty.

Sonneratia caseolaris, a red flowering form is even more rare and I have only seen three trees of this mangrove species on the Johnstone River. 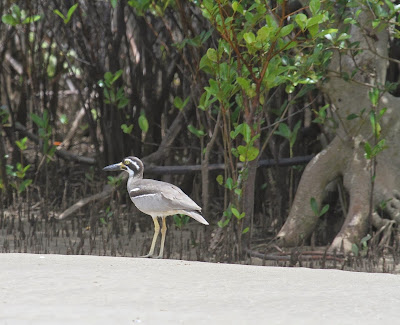 In spite of looking almost every day I have not been able to find the juvenile beach stone curlew I photographed a few weeks ago. However on Friday I was surprised to see a pair of adult beach stone curlews in the mangroves at the bottom of the Coquette Point road. One of the curlews started behaving strangely, bobbing its head and making threading sounds.

It quickly moved towards a plover, which was fishing some 100 metres away, minding its own business. 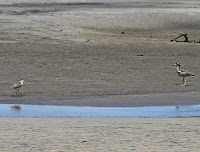 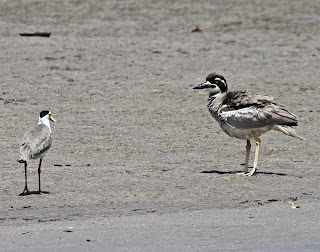 Beach stone curlew marched up close to plover and ruffled his feathers and made low alarm calls. 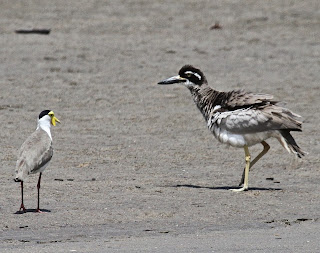 Plover turned to the curlew and I am sure he tried to put his case for fishing rights. 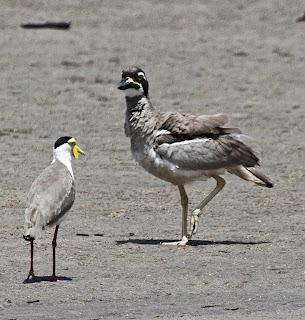 Beach stone curlew drew closer and closer to plover and he became increasingly agitated, plover did not budge one inch the whole time.

Frustrated, Beach Stone Curlew, with the loudest shrike he could muster, flew at Plover. Plover took to the air with a vertical jump and retreated to another fishing spot well out of sight of Beach Stone Curlew. 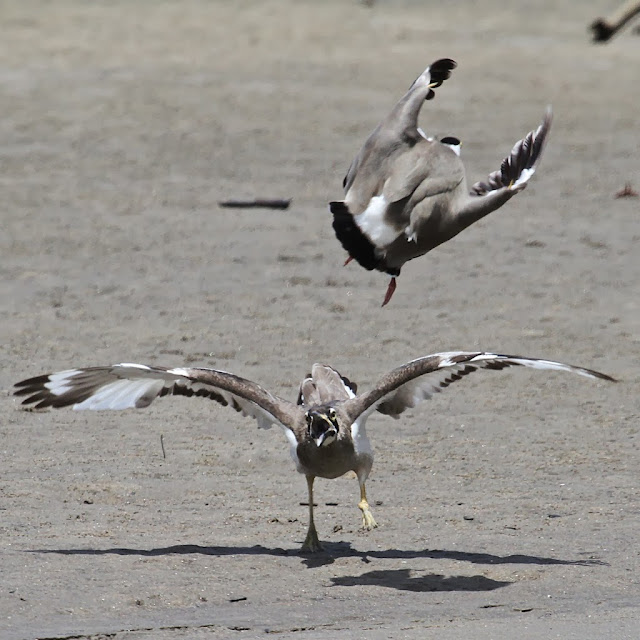 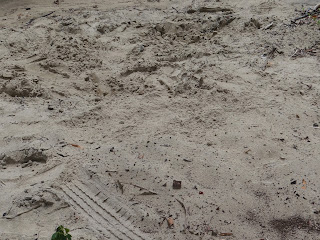 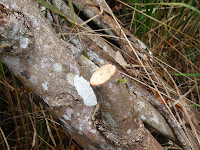 At the bottom of the road and above the high water mark and within the World Heritage Wet Tropics this morning a couple of men in a white Subaru sedan 1980 model and towing a trailer removed a trailer load of sand from the beach area. A large hole is left from where the sand was taken. To gain access the men cut branches from a Capparis arborea shrub.


I did not see the men but a person came into the nursery to tell me about the incident and I went straight down and photographed the site.  In order to gain access to the site the car was driven past a 'No Cars on Beach' sign and the 'World Heritage Land' sign. What type of people think they have the right to remove sand from any beach let alone a designated protected site such as this area?

On Friday I walked out on the beach at the low, afternoon tide and was thrilled to see ten Little Terns with other terns.

Left;- Gull-billed tern with crested terns and behind and back two Little Terns. 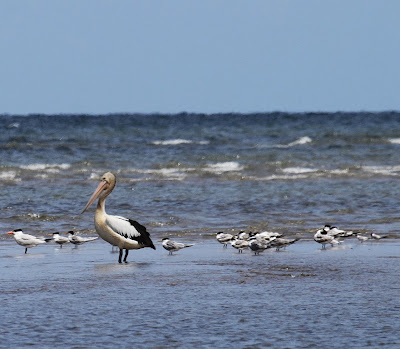 
Their were two Caspian terns and they are large birds. The photo below shows a caspian tern in the background behind two crested terns. 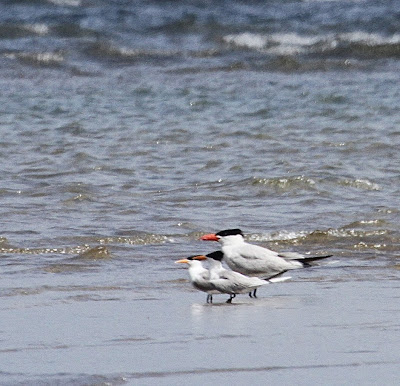 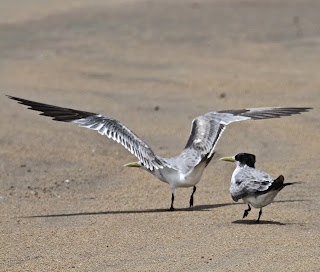 The crested tern is by no means a small bird. 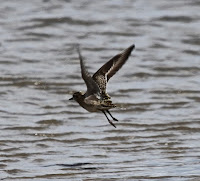 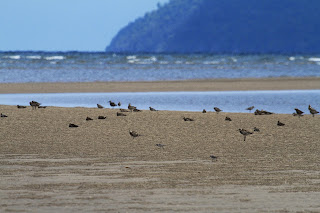 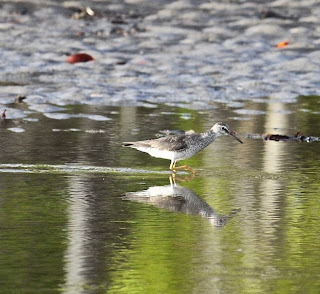 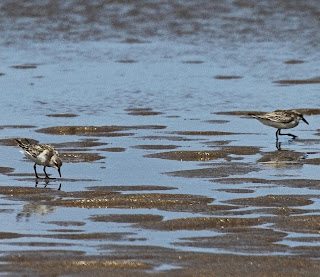 I found white-faced heron and he was concentrating on the moments of fish in a pond left by the out-going tide. 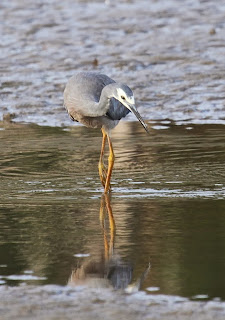 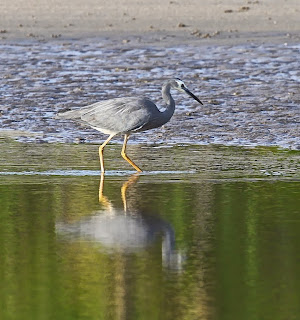 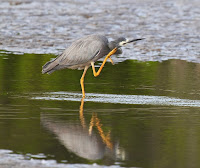 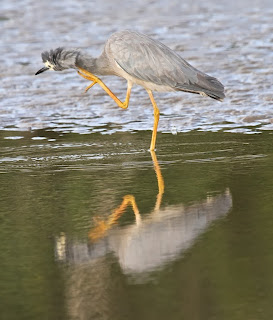 Isn't it annoying when you get an itch when you are concentrating? 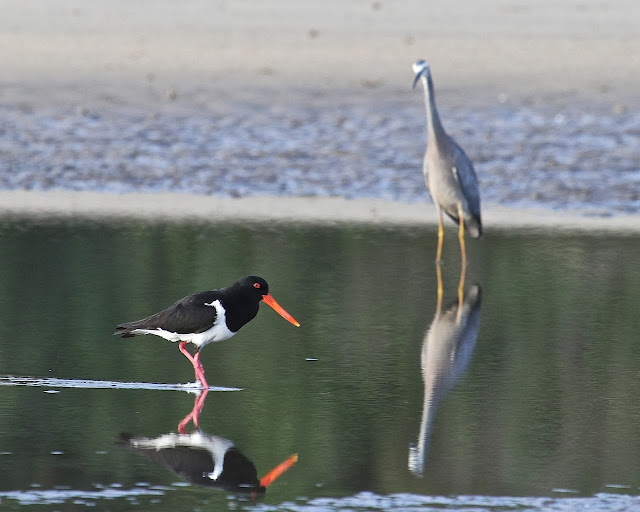 I hope you see something amazing on the beach today.