While it seems most of Australia is beset with either fires or drought here in the Wet Tropics the weather conditions remain perfect. A little bit of rain this week has already returned a green tinge to the grass and although the days are warm the nights are still cool.

The tides have been low before sunrise this week and perfect for early morning walks on the beach. The terns wait for the sun to rise before they begin their day's fishing.

Each morning this week I have counted over 200  gull-billed terns and one hundred crested terns all on the exposed sandbars and beach at Coquette Point. As the dimness of the morning lifts the terns take to the sky. Gull-bills head up the Johnstone River while the crested turn towards the sun and out to sea.From the quite of the early morning the sky is suddenly full of calling terns. 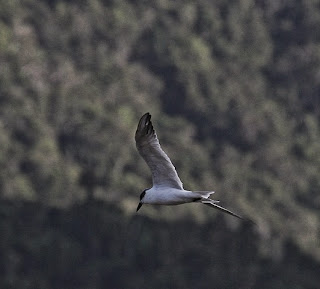 The gull-bills have strange feeding habits for what is generally presumed for a seabird. A few weeks ago I saw around one hundred birds circling above me scooping insects from the sky and sounding and looking every bit like hawks. I thought they were hawks but now I understand gull-billed terns also eat a variety of insects including large grass-hoppers and small reptiles and when hunting for insects they behave and sound somewhat like hawks. A day wouldn't be worthwhile if you didn't learn something new.


As I watched, the gull-billed terns disappeared up the Johnstone River heading, most likely, for a fresh-water lagoon or swamp to feed on the insects swarming now in the spring sunshine.

I thought of all the insects I had seen this week and wondered how many of these insect had been eating plants which had been treated with insecticides, now to become part of the diet of the gull-billed terns? The natural world pays a high price for our privileged lifestyle. We have no value for creatures like grasshoppers and yet their design is beautiful and superb for their purpose and throughout Asia they are a major food source for humans. Incidentally the union of these grasshoppers lasted all day. 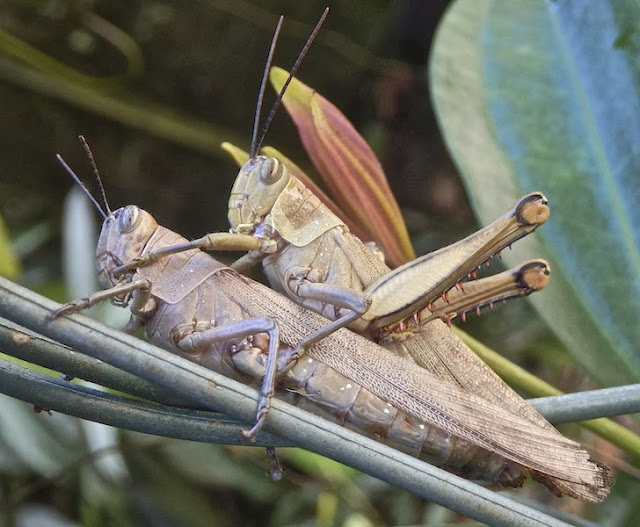 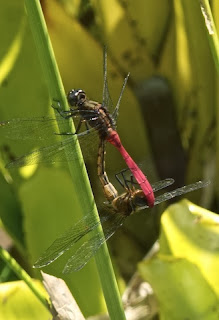 I also saw dragon-flies mating this week and following their short union they would rest awhile before the female repeatedly dropped her eggs into the water with descending, darting movements.  While this happened the male hovered close by observing and no doubt protecting her.

The main food source of dragon-flies is mosquito larva.


In the mangroves the Burdekin ducks have again paired. Burdekin ducks mate for life and several pairs live around the Johnstone River estuary. When not breeding they live independently, sounds like a pretty sensible arrangement to me. 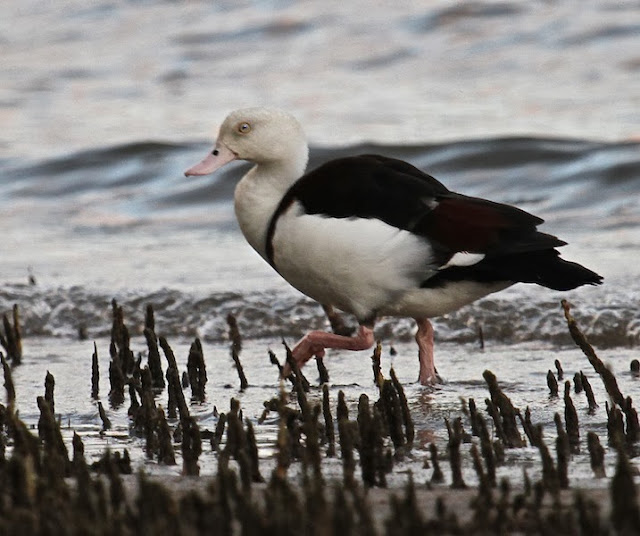 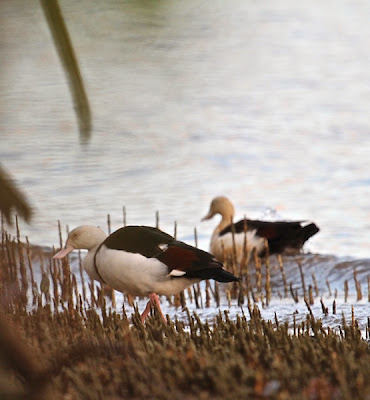 It is so strange to watch  what you perceive to be fresh-water birds swimming in the waves around the estuary and feeding in the mangrove mud. 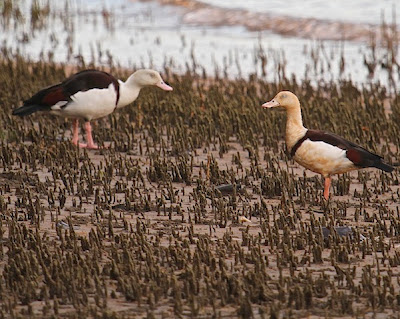 River estuaries are habitats for shore birds as well as a wide range of creatures from ducks to wallabies, crocodiles and cassowaries. 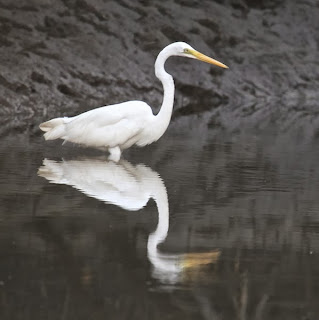 Crocodile Creek is this eastern reef egrets preferred breakfast location. As I watched she caught and ate three mullett.


While at the mouth of the creek greater egret used the shadow from his wing to send fish in a scurry making it easy for him to find and catch. 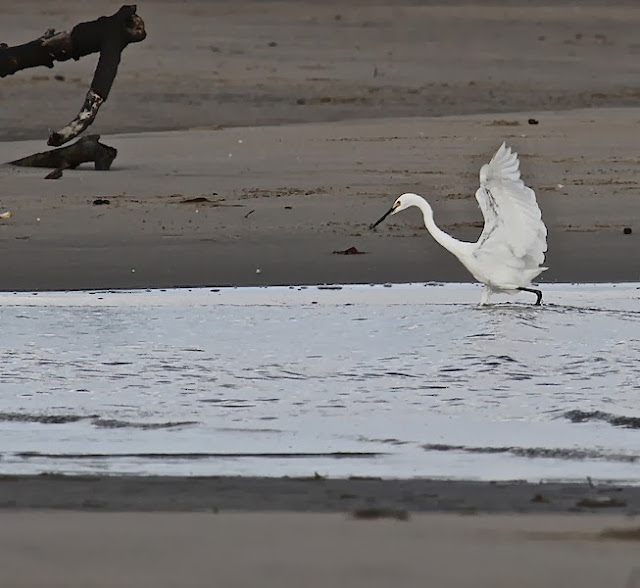 White faced heron took advantage of a fallen melaleuca for camouflage and to spy for fish in the pool below. 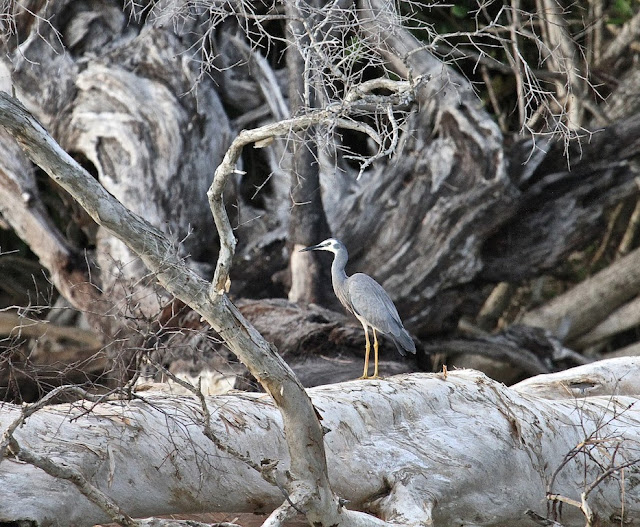 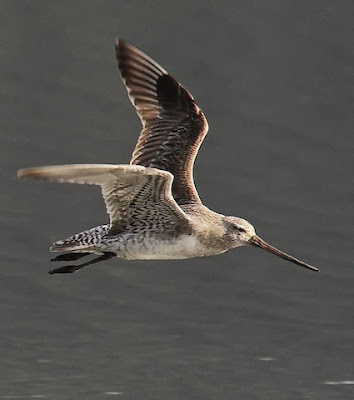 Bar-tailed godwits flew to the outer sandbars to fish on the mudflats in the receding tide. 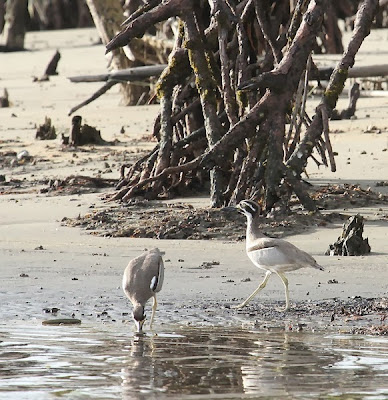 A pair of beach stone curlews also in perfect camoflage extracted crabs from the mangrove mud. 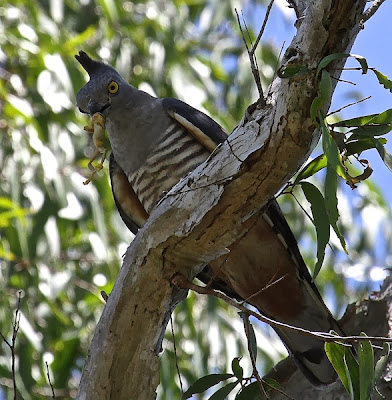 Suddenly the shadow of crested hawk appeared as he flew into the melaleuca trees, he clasped a frog tightly in his beak. With soft, repeated ee-chou sounds he turned and then I saw the female sitting on a nearby branch. 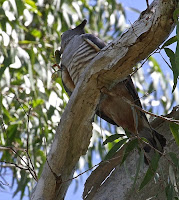 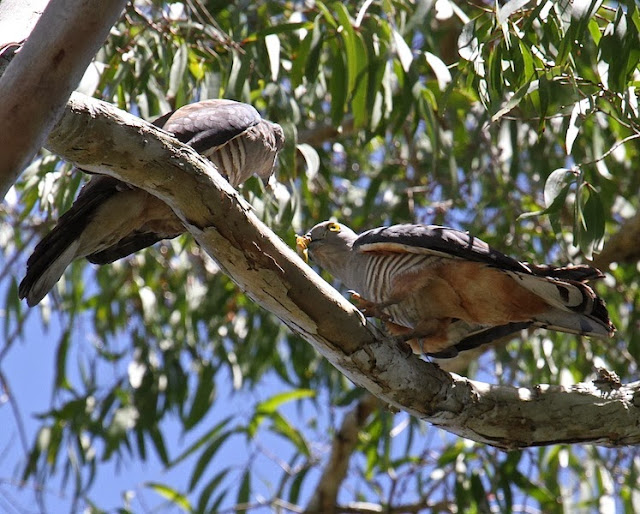 Softly he called to her as he offered the wriggling green frog. 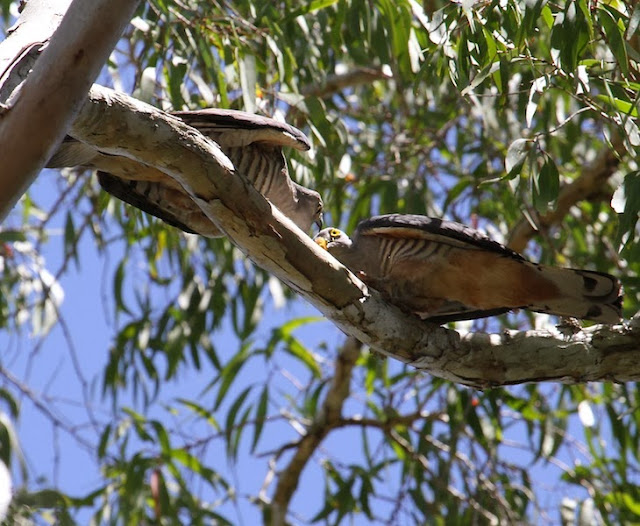 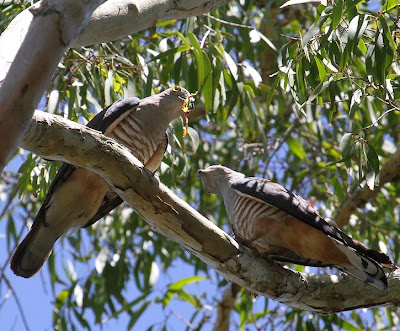 With beak open wide she reached over and took the frog from him. As she clutched the frog in her beak he continued murmuring encouragement to her and fixed his gaze on her. 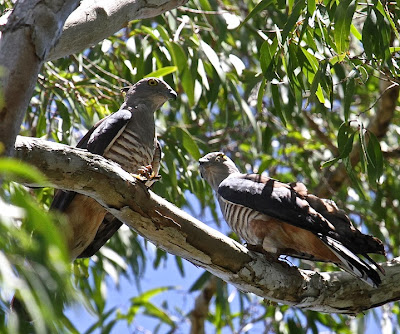 Then much to his distress she took the frog from her beak. 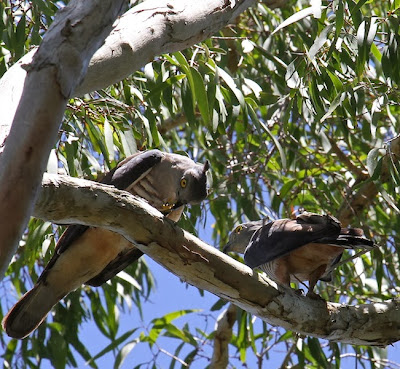 Only to change her mind, she sealed the engagement and ate the frog; they flew away together.


Crested Hawks breed from September to March and build large, cupped shaped nests high on the branches of trees. The female lays around three eggs and both birds incubate the eggs. 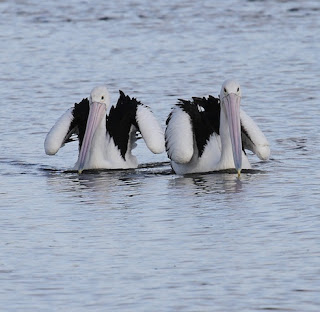 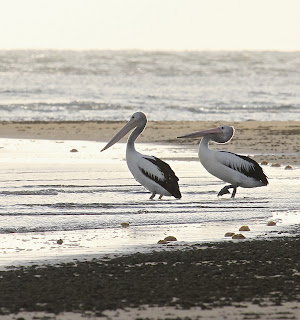 The Pelicans also appear to have paired and early in the morning they wander down to the water where they carry out a ritual of bathing and aerobics. 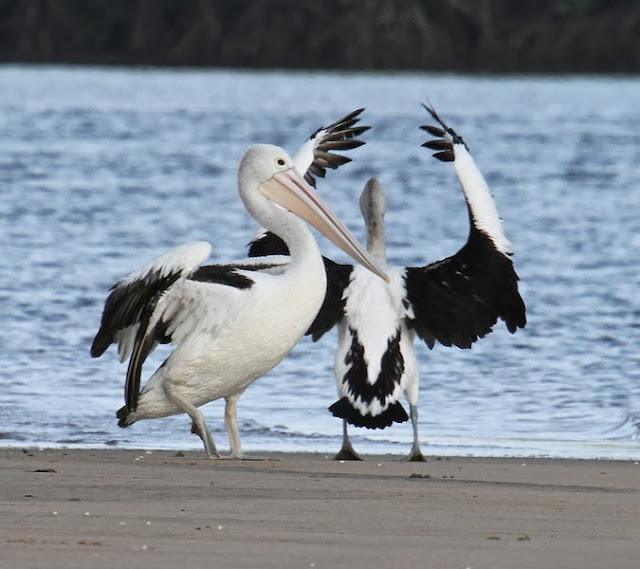 If you go down to the beach today and see rubbish, please pick it up and if you can photograph yourself and the rubbish and put it up on the Seasick Oceans Blog. This blog has been started by a former fisherman who wants people to by aware of marine rubbish.
http://www.facebook.com/pages/Seasick-Oceans/184229235096422