Tonight, wild fires rage throughout New South Wales, the fires have already burnt out over two hundred homes. So far only one person has died and that from a heart attack defending his home. However, firefighters from all over Australia have rallied to help and these men and women put their lives on the line when they tackle the fire-front from the ground. They are super-humans.

Meanwhile the drought throughout central and western Queensland only deepens while south-east Queensland on Friday was battered with severe storms and hail. Winds of over 120km per hour were recorded.

The northern hemisphere's monsoon continues to be extremely active and tonight Super Typhoon 'Francisco' category 4 is heading for Kyoto Japan. There are 10 nuclear facilities in the typhoon's danger zone.

Is our beautiful blue planet trying to tell us something?

Coquette Point has two pairs of beach stone-curlews and over the years the numbers have not increased. This is due to a variety of issues, not the least being dogs. So I was delighted this week to find a new juvenile beach stone curlew in the mangroves at Coquette Point. Isn't it cute? 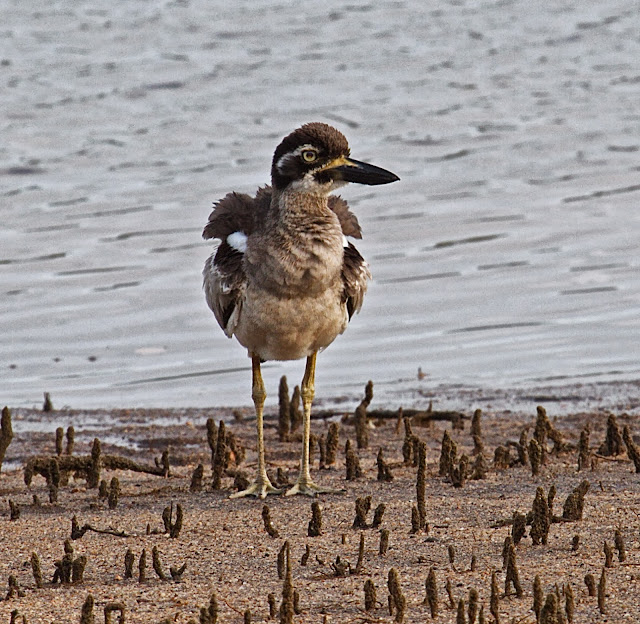 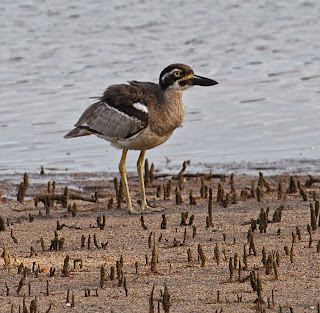 The beach stone-curlew is listed as Vulnerable in Queensland and it is ranked as a high priority under the Department of Environment and Heritage Protection.

One of the reasons there is a sign saying 'No Dogs on the Beach' at Coquette Point is to prevent the beach stone-curlew from becoming extinct in this area.

We have reached such a tipping point on planet Earth that if we don't start to activitaly protect our environment from any further degradation we will find ourselves living an impoverished existence on an unstable planet with extreme weather events. This won't be our children's inheritance as we are experiencing these conditions now. 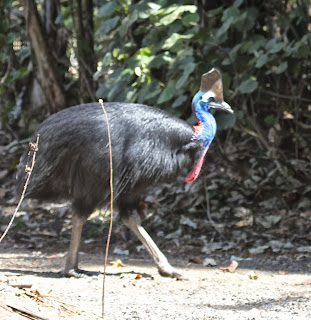 It was upsetting this afternoon to find a family walking on the bird rookery with a dog. They ignored the signs and took the dog into the bird sanctuary.

They also ignored the crocodile sign and the children and adults were swimming in the water and not far from where I photographed the crocodile last week! Obviously the whole family was illiterate, otherwise one can only assume they deliberately ignored the signs. I have photos.

Matriarch cassowary Jessie is thirsty and a bucket of water left near the vegetable garden for my use has been claimed by her. 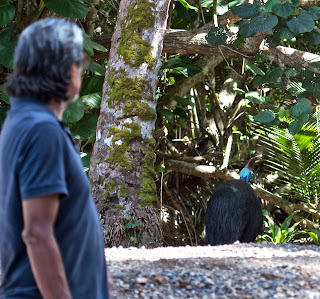 Henry Epong was doing some work on a tank when Jessie strode past him. He spoke to her and suddenly she stopped, turned around and looked at  Henry. James and I were watching and it looked as if Jessie understood what Henry was saying. James and I were not made privy to the communication. 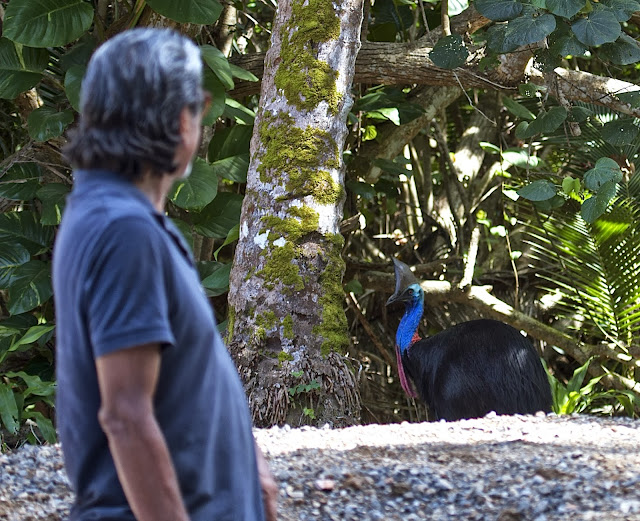 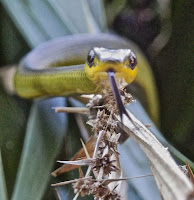 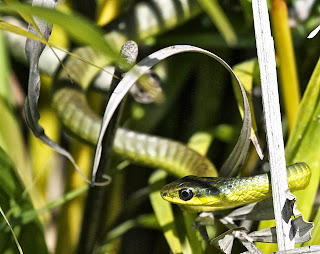 Gertrude the green tree snake has been popping up in the nursery around the plants. So far she hasn't frightened anyone and most people know she is harmless and are fascinated by her. 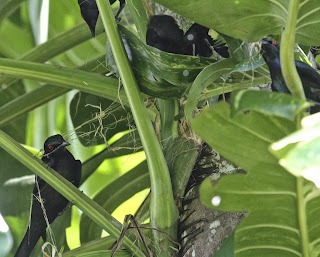 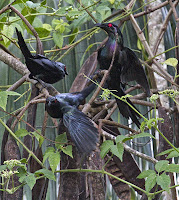 The Metallic starlings have ramped up their activity and are busily building new nests and repairing old nests. 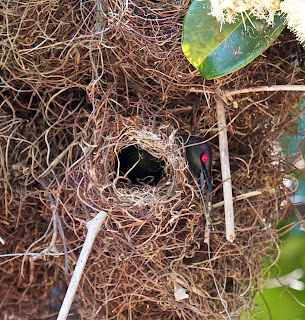 The Metallic starlings pull fibres from vines and old seedpods and take them back to build their nest. As they weave the fibres into shape they use their tail to hold onto the nest. 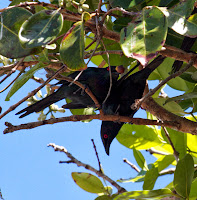 They pop in and out of the nest chamber, weaving and shaping and all the while chattering. 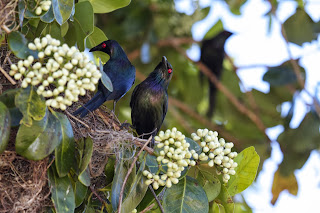 Meanwhile male birds return to the nest with fruit offerings for the female. When the female shows no interest the male swallows the fruit. Courtship at the mouth of the Johnstone River is surrounded by the white flowers of Syzygium forte the white apple tree, which is now in full bloom in the Wet Tropics rainforest all over the Cassowary coast. 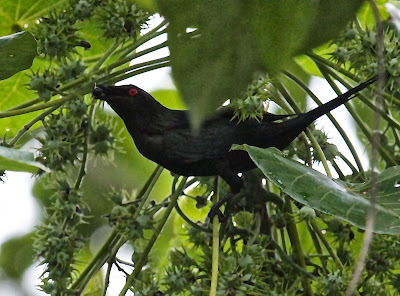 A food favourite of the Metallic starlings is Macaranga tanarius, the butterfly plant. It is in full fruit at the moment and in between nest construction the metallic starlings swarm all over the tree deftly extracting the hard black seed-ball from the spiked, green capsules.

Many of the Macaranga fruits fall to the ground and waiting on the forest floor is the green turtle dove often covered in a shower of dropped seed. What a beautiful contrast in colours and style the two birds make. 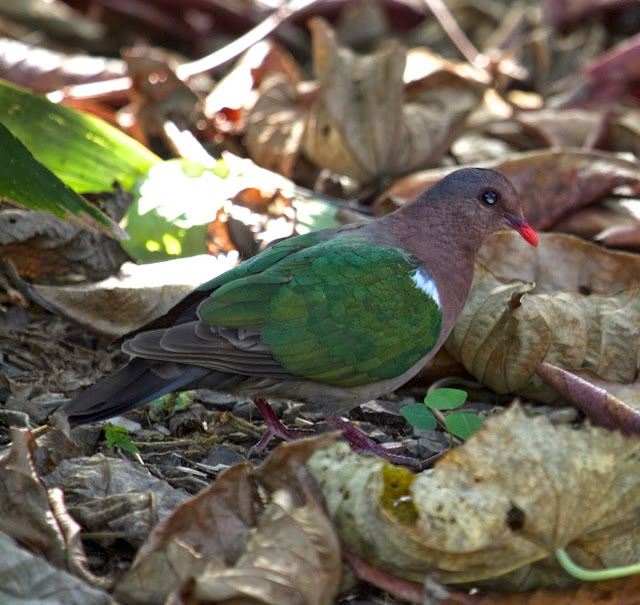 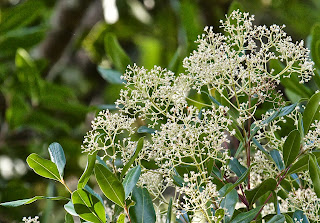 The blush satin-ash, Acmena hemiilampra is also displaying spring flowers. It will take several months for the white berry-like fruits to form and provide food for pigeons and cassowaries. 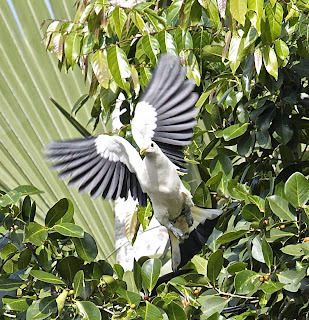 Two of my three PIP's have paired while the other bird calls plaintively every morning. She moves from tree to tree swishing her wings as only a Pied Imperial Pigeon can. Then she settles down to mournfully cooo for a mate before feeding of the now ripe fruits of the candle-nut tree, Aleurites rockinghamensis. 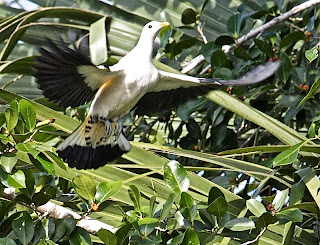 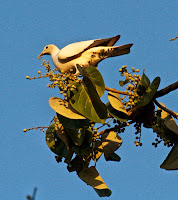 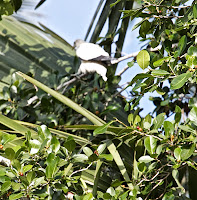 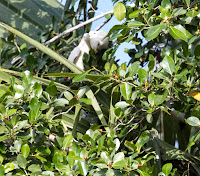 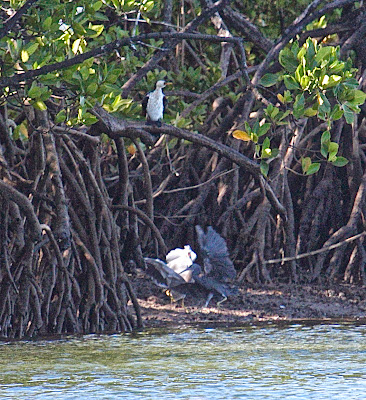 Darters came to watch the flurry of wings as the herons first dance on the cleared ground then around the trunks of the mangroves.

Grey heron was the first to dance watched by the others. 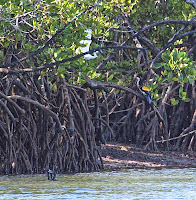 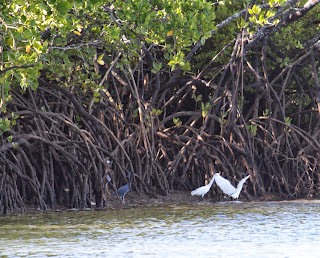 More darters turn up to watch. 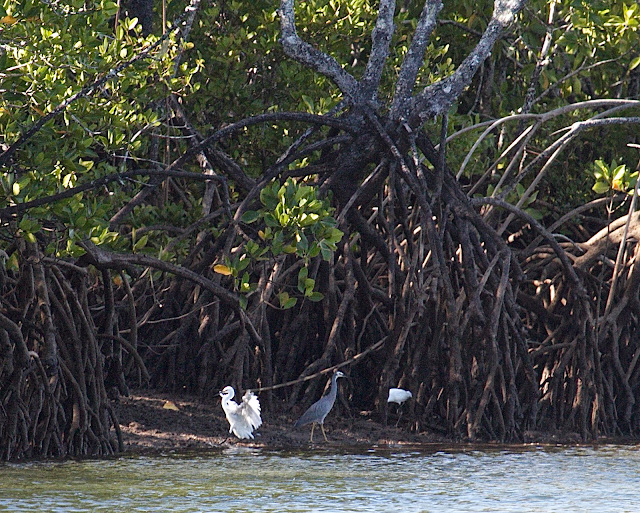 How little we know about the interdependence of the creatures of the Wet Tropics and the significance of a small area of mangrove forest to birds such as these?

I hope you see something amazing and beautiful today.