A fast moving front brought a weather change on Thursday morning and dawn broke to a splendid display of red mackeral sky.

A sudden change in the wind from NE to SE and by late afternoon the front spurned the first storm of the season, 21 mm of rain, hail and strong winds whipped through the Atherton Tablelands as the storm passed. By the time it reached the coast it had run out of puff and only 1mm of rain was recorded at Gordonvale and none in Innisfail.
However, a strong, cool breeze raced up the Johnstone River towards the low pressure system bringing a welcome relief to the heat. 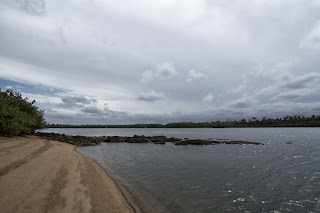 The storm shaded the sun and the thunder rolled over the Innisfail Valley. The bush stone curlews started to tweet, it was a most unusual vocal call for these birds which are renown for their loud, wailing, nocturnal calls. One bush stone curlew ran from the rainforest quickly followed by a second bird. As the thunder rolled they moved together startled and uttering low tweets.

Suddenly the birds took to the air and flew into the mangroves on the northern side of the river.
By the sound of their calls, over the last two night, they have returned with a few mates. 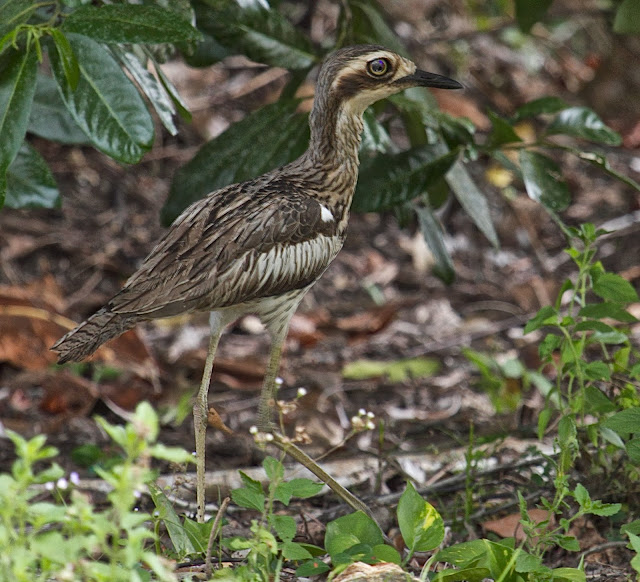 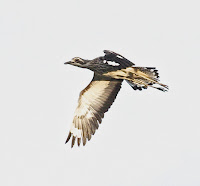 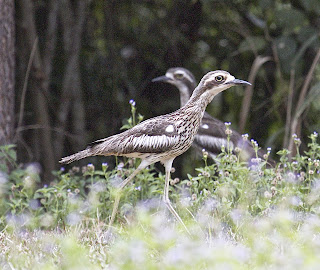 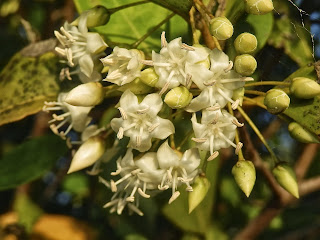 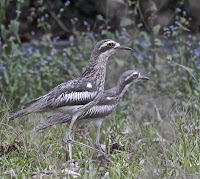 Clusters of scented, small, white flowers cover the mangrove Aegiceras corniculatum in spring. These flowers are full of nectar and attract both native and exotic bees, in fact the nectar from the flowers of this particular mangrove makes a substantial contribution to the production of honey in coastal areas in tropical Australia.

Sex in the mangroves.

A. corniculatum also plays host to a number of molluscs and the mangrove snail Melarapha scabra is mainly found of the leaves of this species of mangrove.  The snail below has just deposited a pile of dung and a mucus trail is being excreted behind it.  Gastropod sex is on in the mangroves! The mucus trail is laid by the sexually ready female snail and the male follows the mucus trail to locate the female. Note there is a hitchhiker insect on the shell. 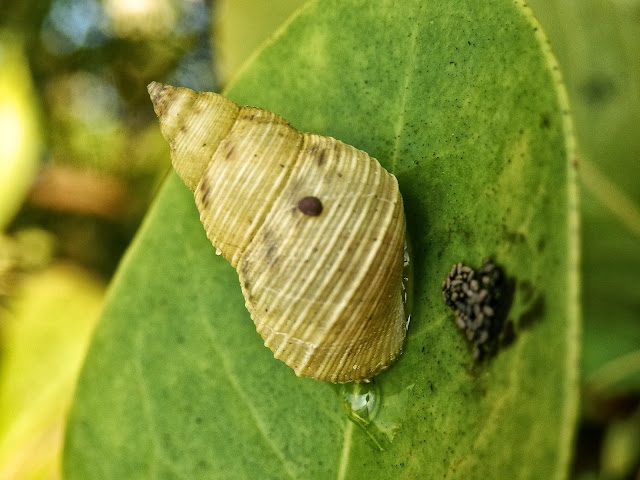 The mangrove snail is a particular favourite of the cassowary and is the main reason you often see cassowaries in mangrove forests. 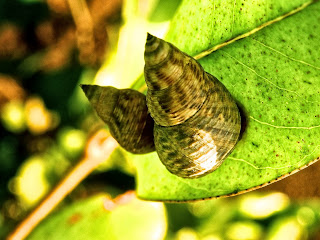 Talking of cassowaries, I haven't seen any sign of the matriarch Jessie or her partner Snout this week. Hopefully, Snout is sitting on eggs and Jessie has gone off to look for another eligible male. 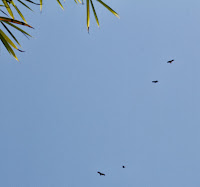 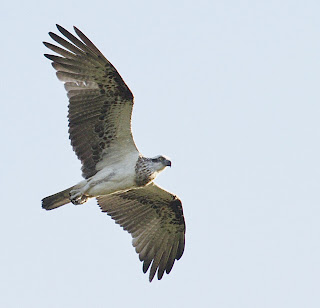 The shrill calls of the osprey parents are a constant background noise of the Johnstone River estuary this week as the parent birds teach the juveniles to fish. 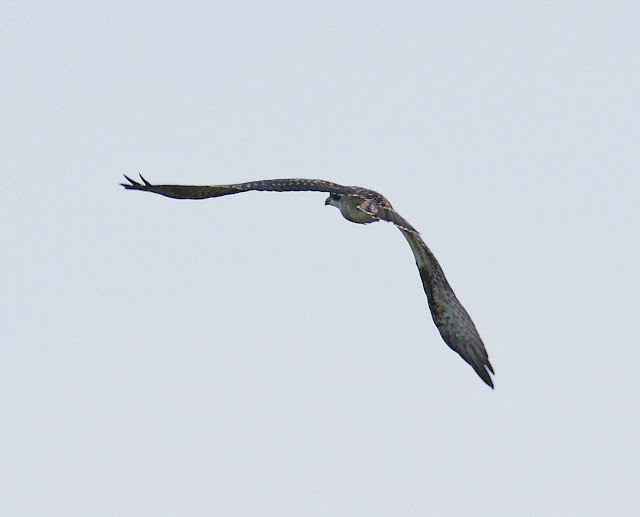 The bright white tips on the youngesters feathers and dark head markings makes it easy to identify the juvenile osprey as other than the markings they are the same size as the parent bird. 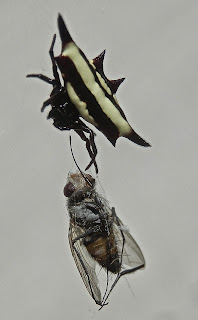 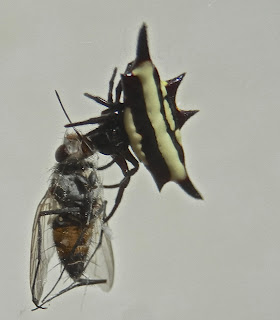 Summer brings flies so it is always good to have a friendly jewel spider or two around; their favourite food is flies.

Once fly was caught in the web the jewel quickly wound in her catch. Over the next hour she sucked the juices from the fly until only the skeleton was left. 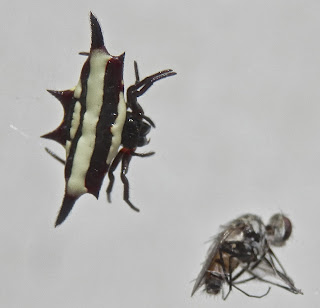 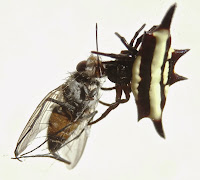 The meal finished she repaired her web and waited for the next victim. Sorry if you find this gruesome most of us have never faced up to the processes of our own meat-eating. 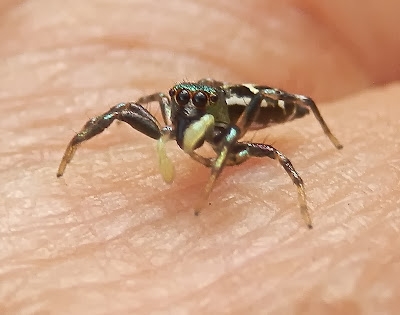 The week wouldn't be complete without finding another species of jumping spider. Unfortunately yet another Salticidae I was unable to identify from the online photo-bank of this spider. 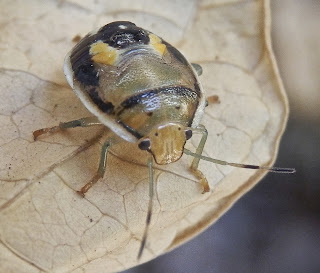 The hot weather has brought to the surface another summer visitor, the shield or better known stink bug. I found this pretty little fella on a granadilla leaf. Not all shield bugs damage plants many of them are mite and aphid eaters. 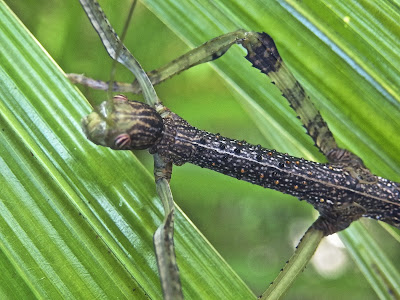 Stick insects have also started to appear and this flightless male has an unusual body armour. 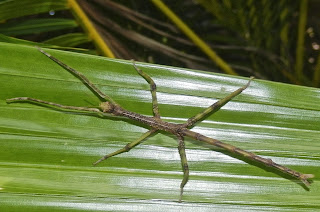 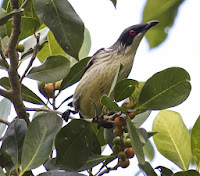 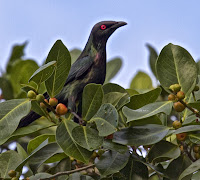 The metallic starlings are busy feeding on the abundant fruit offered by the rainforest. Figs are their particular favourite and it is the starlings habit to pick the fruit and fly to a nearby tree to consume it. In this way they spread the seed and join the other rainforest farmers of the Wet Tropics like the cassowary and the flying fox. 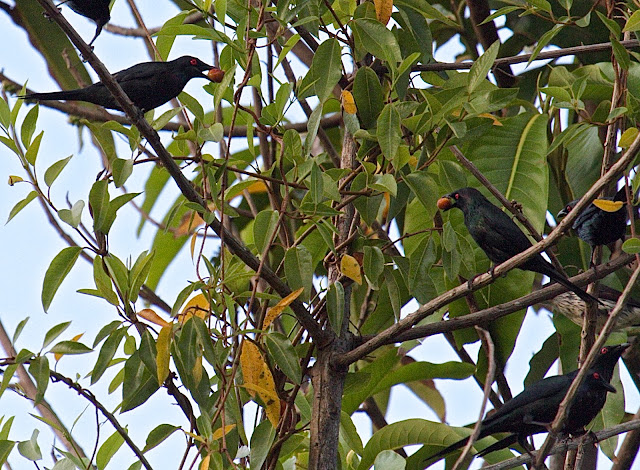 A brief rain shower fell early this morning and before it was finished termites on their nuptial flight filled the sky. Generally this is a signal that the wet season will start within the month.

I went to the Palmerston on Friday and I have never seen, felt or been stung by so many march flies. Not since the 70's have I seen them in such large numbers. Fortunately Coquette Point does not get a lot of march flies, however, we make up for it with sandflies and mosquitoes.