Hello from the new Turtle Triage Centre at Coquette Point, 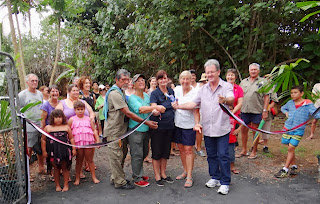 Yesterday the Mandubarra Land and Sea Inc opened a turtle triage centre at Coquette Point. For many years Mandubarra  have been active in rescuing marine turtles and now thanks to a grant from the Queensland Government Minister Andrew Powell, MP,  Minister for the Environment and Heritage Protection of Queensland,  the new triage centre has been built.

The centre was opened by councillor Mark Noland of the Cassowary Coast Council. 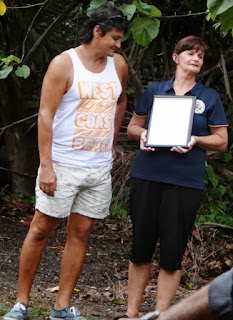 Nellie Epong with son James, right photo,  proudly displayed the letter from Minister Powell and Nellie spoke to the invited guests of her pride in what has been achieved by Mandubarra and her hope for the future of young Aboriginal people of the
district.

Dr Jennie Gilbert has mentored Mandubarra over the years and has shared her technical knowledge and exchanged the traditional wisdom of Mandaburra.  Dr Jennie Gilbert and her husband run a large veterinary clinic in Cairns and Jennie is also a researcher of marine turtles at James Cook University.
In 2000, she and fellow marine biologist Paul Barnes started one of Australia's largest voluntary 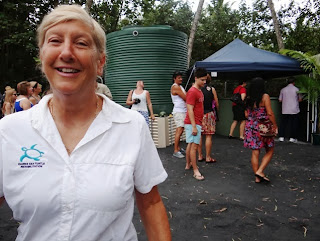 With Jennie's help Mandubarra have successfully rescued and rehabilitated 15 marine sea turtles, many with floating syndrome, wonderfully they have been successfull and released  the turtles back into the wild ocean at the point of their rescue. Many of the sea turtles found are full of plastics so it is an important remainder that we must all  prevent our waste from ending up in our waterways and eventually in the Ocean. 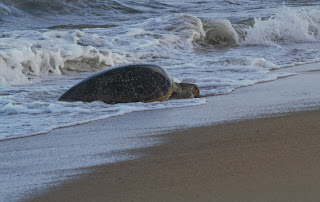 Marine turtles nest on many of the beaches of the Cassowary Coast and Russell Constable took this photo last week of a turtle coming ashore at Bramston Beach to lay eggs. It was 5pm and unusual for a turtle to emerge at that time of day.    So

It is a wake up call that our beaches should never become highways for vehicles; beaches are complex ecosystems and habitats for marine creatures above and below the sand. Russell watched while this turtle crawled to the dune line dug out a large hole and laid her eggs, before returning exhausted to the Ocean. Thank you for sharing this photo
Russell. 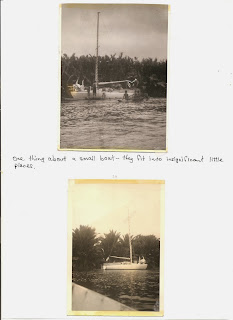 Today 'Crewcut' has been restored by a new
owner and is as good as new. A strong
50 years ago Friday, 22 November 1963, I sailed into Samari Island aboard the 23foot cutter 'Crewcut'. It was the start of a journey hitchhiking around the world on boats. New Zealander, Denis Lobb was the owner builder of 'Crewcut' and I joined the boat at Hayman Island. 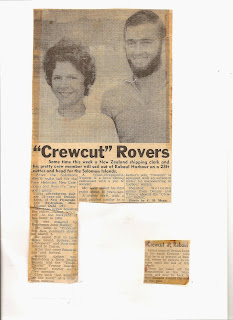 I had just completed hitchhiking around Australia and at 20 years of age the world was to be my 'oyster'. Looking back I wouldn't change anything. It was such a privilege to visit remote places, only accessible by small boats. Over the years many communities made me welcome and the amazing thing was wherever I went the less people had the more they shared. 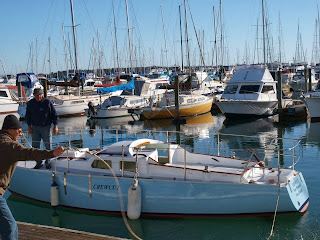 I hope 'Crewcut' will give new owner Noel many weekends of enjoyment. 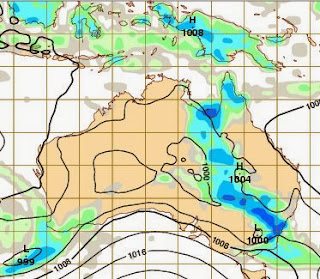 The first cyclone of the season TC Alessia formed off the Kimberly Coast this week and is expected to move across the top end and into the Gulf by Friday. If it is performs as predicted it will bring drought breaking rain to some of the worst affected areas of Western Queensland. However, at the moment the cyclone is experiencing dry wind inflows and unfavourable conditions for development. 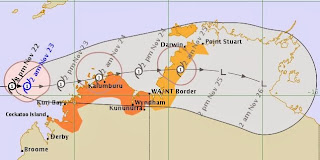 I have computer problems with my Mac and it will not Boot Up! All my wildlife photos are loaded on it so if I sort out the problems there will be a bonus lot next week.
That's all, share some love,
Yvonne