A few drops of rain this week, 7mm, has ramped up the humidity and sent the mosquitoes into a breeding frenzy. Summer mango-madness is here early this year.

I think every year we say its hotter, earlier; earlier than the year before, so if you are concerned about the changes you are seeing to the climate then join me tomorrow, 17 November, 10 am at 393 Coquette Point and be part of a GetUp National Day of Climate Action. We are going to plant trees, take a walk on the beach then enjoy a tropical fruit brunch; come in heatwave-themed clothing, hat and sunglasses. If you are able make a sign and bring it with a message to the Abbot Government about Climate Action.

Mega Typhoon Hiyan which devastate the central Philippines Islands on Friday 8 is a wake up call  to all peoples living along coastlines within Monsoonal Zones. The large Filipino community in Australia have rallied, along with many other Australians, to help those who have lost everything in Hiyan.

Gloria, who many of you know from the nursery, sends her sincere thanks to everyone who phoned asking about her family. Although Gloria's family have lost their crops and have sustained damage to their home, they are all safe, Cebu Island where they live was not so badly affected by Hiyan. 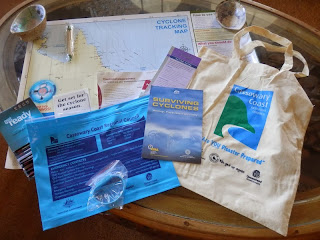 This week the Cassowary Coast Council and the Innisfail SES distributed a Disaster Preparedness Kit with a large cyclone tracking map. If you haven't received one they are available from CCRC office and SES.


While I have received lots of reports of brief sightings of cassowaries over the last month the birds are not, at the moment, venturing down to the tip of Coquette Point. When I don't see them I know there is plenty of food in the Moresby Range National Park and they are content to remain safely within their rainforest home. 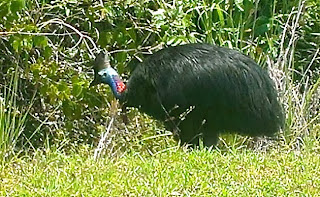 Alan from the Goldsborough Valley, who visited me today, saw a cassowary beside the road at the top of the Moresby Range, he managed to take a few photos on his phone and I have identified the bird as the matriarch Peggy. I have not seen Peggy for over twelve months so it is good to have another sighting. She was crossing the road from the National Park and went down towards the Johnstone River. 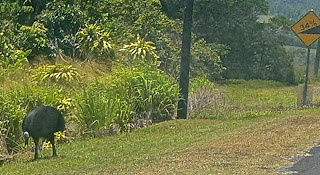 Margaret D has seen Brown Cone a couple of times near Ninds Creek, where he normally hangs out and he has one very small chick. There has also been reports of a Cassowary with three chicks and another one with two chicks, no photos as yet. 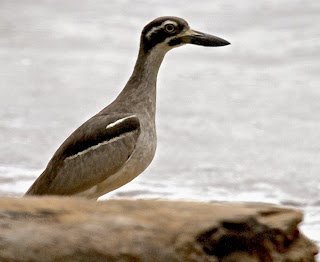 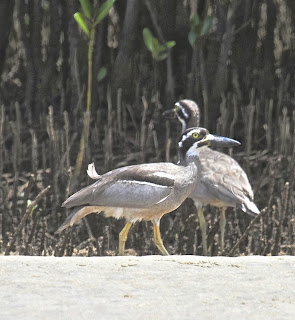 Mum and Dad Beach Stone Curlew are never far away from the juvenile even though he likes to explore the estuary by himself.

If you go down to the beach on a making tide and a waxing moon you may see the Ghost Crabs frolicking on the sand. 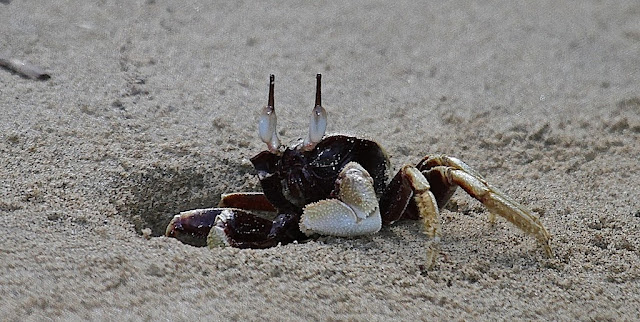 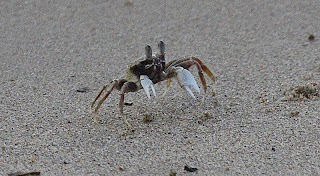 A young buck emerged from his hole and danced across the sand. 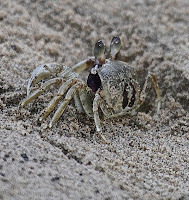 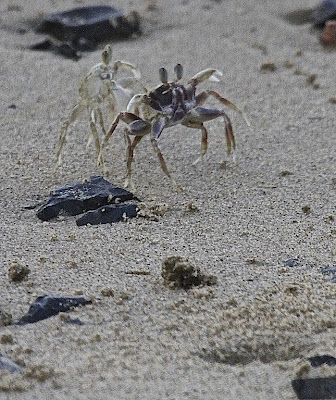 A Sand Bubbler crab challenged him and they appeared to dance across the beach to a beat I could not hear. 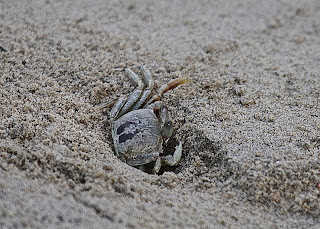 Horn eyed slowly backed up towards his burrow and retreated.

Another horn-eyed pocked his head up to see what all the fuss was about. 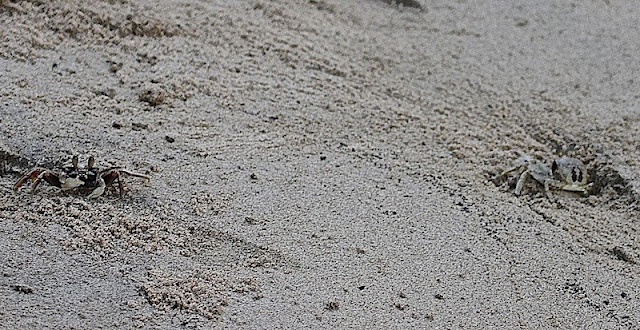 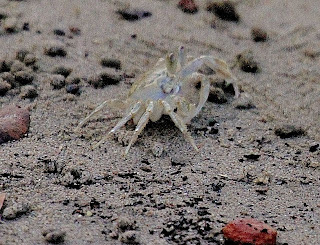 Sand Bubbler returned to rolling sand balls while keeping an eye on her burrow.

While old Horn-eyed  didn't move from his burrow and watched the antics with scorn-full eyes.

Just after sunrise I stumbled on Nankeen Night Heron fishing in the nursery pond. I startled him and he flew up to a coconut tree where the early morning sunlight shone on his damp feathers. 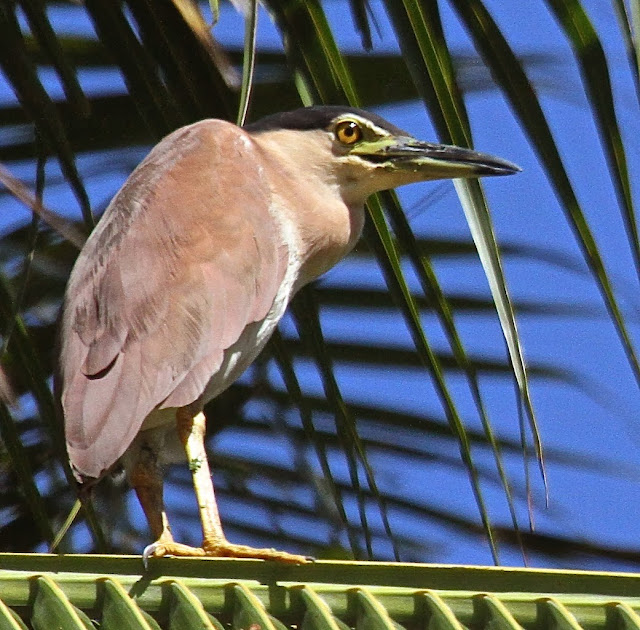 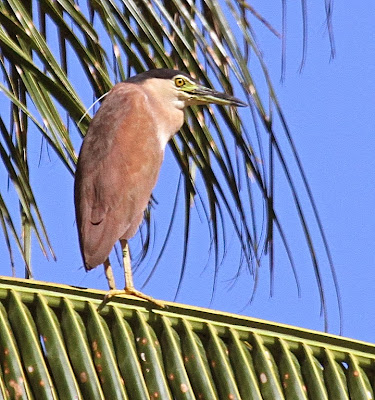 He turned his head ever so slightly to display his long white head plume.

These birds are nomadic hunters in the Wet Tropics and the only breeding colony recorded is at the mouth of the Bohle River.

Although I have checked every morning he has not returned to my pond, even though it holds plenty of fish.

Summer is diffidently insect heaven and the increased humidity this week
brought the conditions suitable for insect activity. Longicorn beetles have taken to the air. 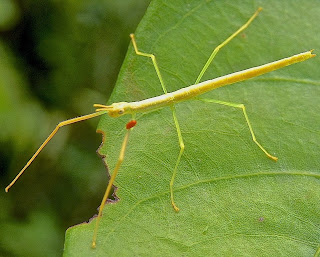 Baby stick insects are on every leaf and this one has a red mite attached to his foreleg. 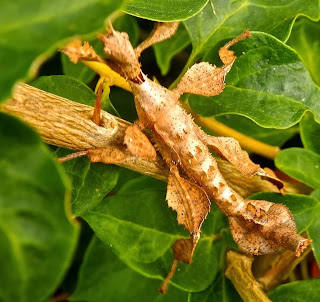 The wingless female generally stays on a tree and waits for the male to discover her.  The males are able to find the females with ultraviolet vision.

I saw crested hawk swoop down and catch a male stick insect which he quickly dispatched. One female will be waiting a long time for a male. 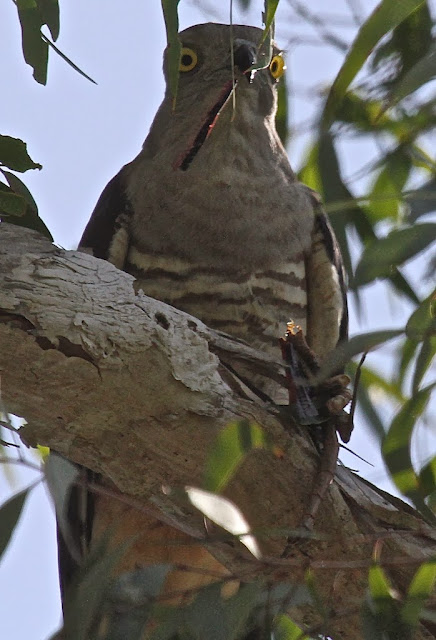 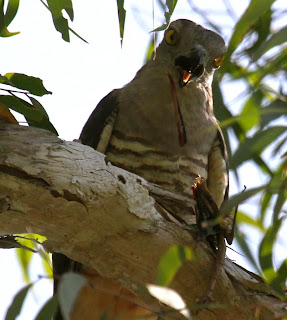 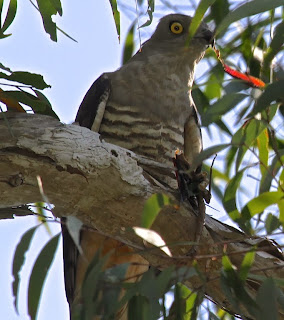 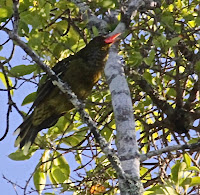 Yellow Oriole is singing love songs from high in the rainforest canopy.
It was not difficult to find this bird as he called high musical notes to a female deep within the rainforest. When she answered him he replied with longer and higher notes until the early morning air was filled with the happy song.

Spotted cat-bird was wary and would not come out of the rainforest canopy but his presence could easily be heard with his loud, persistent, cat-like calls.

These two bird's calls are signature markers of the Wet Tropics Rainforest. 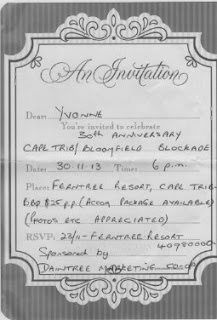 My 'old' mate Pat Sheers rang me this week to remind me about the 30th Anniversary of the Cape Tribulation Blockade. If you were involved in the Blockade you may like to come to the anniversary get-together on the 30th November. Accommodation is available at the Ferntree Resort 4098000.

Pat also reminded me that this week is the 20th anniversary of the infamous Foxtail Palm seed affair. Pat was the National Park Ranger at the Daintree at the time and it was his job to carry out surveillance on the smuggling of wildlife from National Parks. It was during one of these operations he discovered individuals removing Foxtail Palm seeds. The Daintree was a wild place in those days.

I hope to see you tomorrow at the Climate Action Tree Planting;