The weather is not worth talking about. Three sunny days this week then back into strong winds and rain. Where is the dry season? 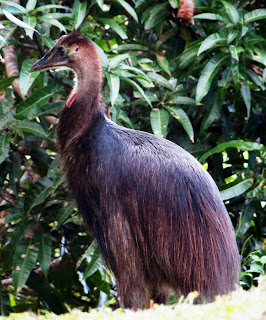 I saw cassowary chick 'Cheeky' this week and it is wonderful to see how he has grown. Dad was in a great hurry and I just managed to capture cheeky before they both disappeared into the rainforest.

I thought you might like to see some family shots of 'Cheeky' and I found the following on file. 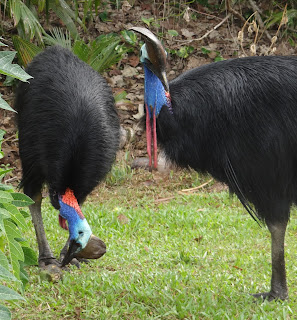 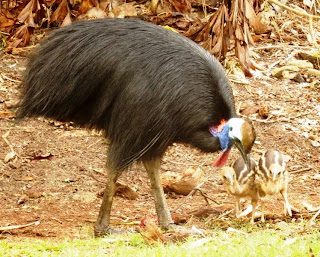 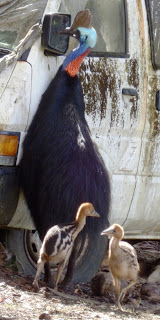 Cheeky with his late sibling on the right September 5 2012. We do not know what happened to the other chick, one day he was missing; its a risky life for Cassowary chicks!
A photo of 'Little Dad' fighting his reflection in the car mirror with the chicks wondering what was happening.
It is such a privilege to watch these amazing birds grow and reach independence and set up their own territorial range. 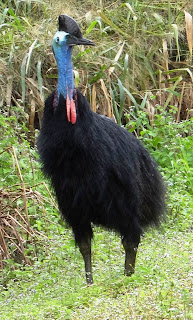 As I was coming back from town on Friday afternoon I saw a young cassowary which I could not identify. The bird was approximately four years old and by its tail feathers and the size of its casque and wattles it is properly a female. ( Female cassowaries are larger than the male and their tail feathers do not drop.)  The bird was walking across the road from the sewerage plant and into the littoral rainforest along Ninds Creek. This area has been approved for a Metricon marina development to be called 'Seahaven'.

I managed to take two good identifying photos of the cassowary before it disappeared into the littoral forest on the eastern side of the road. As she crossed the road she dropped a scat 100% quandong seed.

If anyone knows this bird and has given it a name please contact me otherwise how about some suggestions for a name on 'comments'. 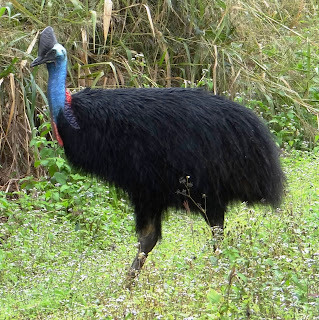 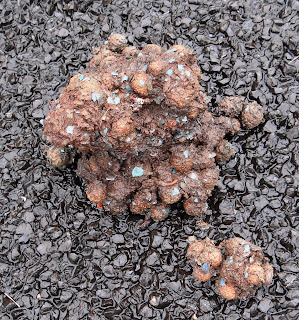 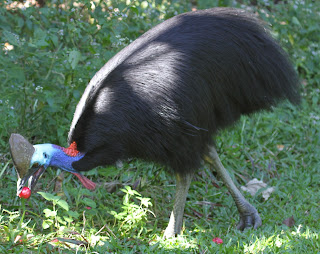 Cassowary 'Snout' visits the Quandong grandis tree and the Onionwood Syzygium alliiligneum tree several times a day. It appears either his eggs were unsuccessful or the chicks died, certainly he is no longer sitting on eggs and the time has elapsed from when they were due to hatch.

The colours of rainforest fruits are strong and bright and stand out against the brown of the forest floor. Have you noticed how the red of the onionwood fruit and the blue of the quandong fruit match the colours of the cassowary? 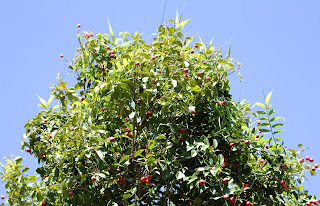 The onionwood tree is restricted in its distribution and occurs only in the coastal Wet Tropics region between Cape Tribulation and Tully. Old rainforest trees will reach a height of 15 to 20 metres however, street planted onionwood trees seldom reach 10 metres.

Onionwood is suitable as a tree for a large backyard, the fruit makes excellent jam and they are good to eat fresh, they taste somewhat like a tart apple but a little spongy.

Onionwoods fruit over a long period from May to October and these fruits were a major rainforest Aboriginal food. 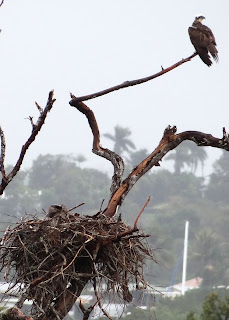 Osprey's babies have hatched however, between the rain and the wind also worried about my camera in the rain and not wanting to disturb the birds I took only a long distance photo, if you blow it up you can just see Mum feeding a chick while Dad kept lookout.

As the chick hatched on that 'auspicious day' perhaps we could call it George! Hopefully I will be able to get close to the nest next week to take a photo without disturbing Mum. I will also get a better look and see if there is more than one chick. 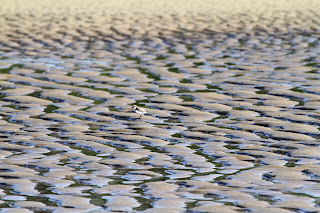 Extremely low tides all this week .12m on Monday and floodin up to 3.33 meters gave the coastal rivers another good flush. Strong winds pushing the water back in have left strange patterns in the sand which are revealed when the tide recedes.

A tiny red-capped dotterel feeds alone in a mosaic of zig-zag tide pools. 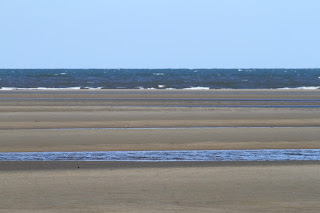 On the outer sand-bar the patterns left by the action of the strong winds and fast flowing tidal change were different. Long striated tide pools created the perfect fish traps for shorebirds, much to the delight of lesser sand-plovers and white faced heron. 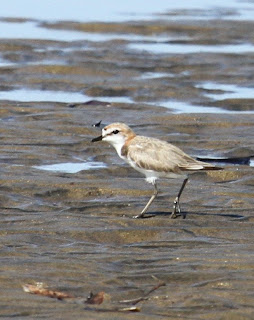 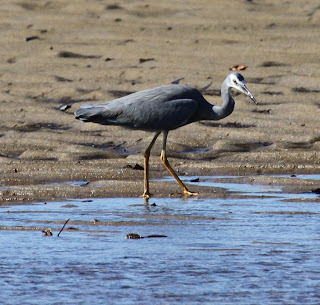 On the outer sand bank I counted 170 crested terns as they fed and rested. The juvenile birds are still being fed by the parents and when the adults return with the fishy meal the excitement spreads through the colony. 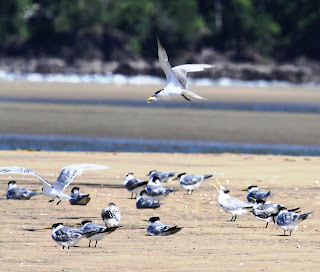 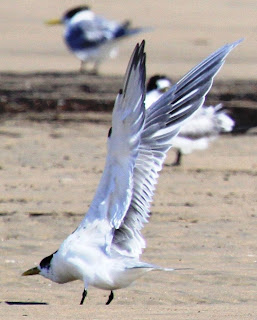 Mangrove dieback continues, devastating the forest at Coquette Point and many large trees have succumbed to the strong winds and big tides over the last month. 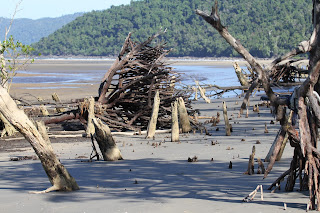 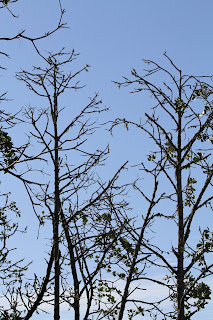 The blind-your-eye mangrove Exoecaria agallocha, a low salinity mangrove tree, is now in the high saline zone and would not be expected to survive very long. At this time of the year these deciduous mangrove trees are flowering with male and female flowers on separate trees.
The common name of the tree is a cautionary warning about the caustic nature of the sap.

In spite of the health of the mangrove forest in the shallow waters many tiny mollusc can be found and it is for this reason that the sandbanks at Coquette Point are such an important shorebird habitat. 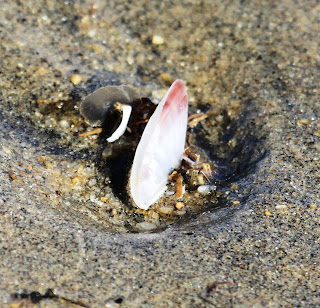 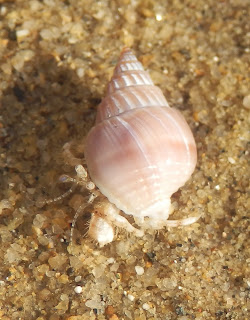 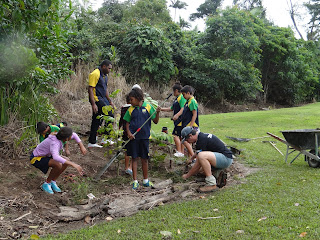 It was National School Tree Day on Friday and the Cassowary Coast Alliance Guerrilla Gardeners were at it again this time at Radiant Life College Innisfail. The CCAGG with the help of the students planted the first plot of a bush tucker garden. Radiant Life College headmaster Mark Todorovic intends to continue the plantings each year with the plan to involve the students in selecting Aboriginal food trees and learning about the nutritional properties of the fruits, the CCAGG will be there to help Mr T and his students.

Cheers for this week and remember tomorrow is National Tree Day so go out and plant a tree and tell everyone about it.