Gale force winds along the Queensland Coastline associated with heavy rain squalls has made outdoor life for man and beast unpleasant this week. When the sun shines for a few minutes the birds sunbathe. 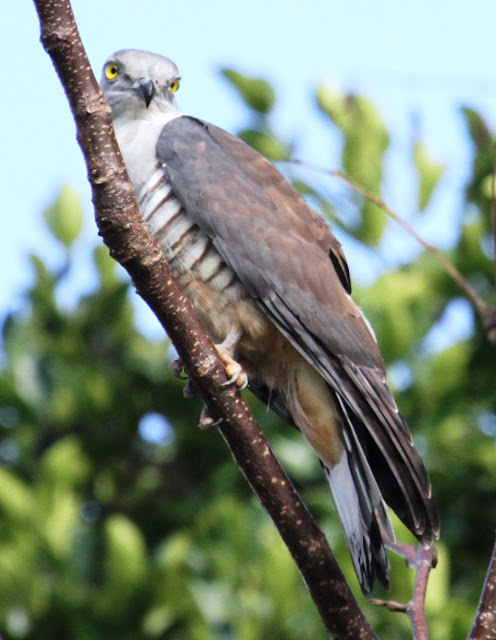 Crested Hawk was minding his own business allowing the sun to warm and dry his wet feathers, he almost had a smile of contentment on his face as he turned to put his back to the sun's warming rays.

But you know what its like one just gets comfortable with a bit of sunbaking when along comes an annoying pest. 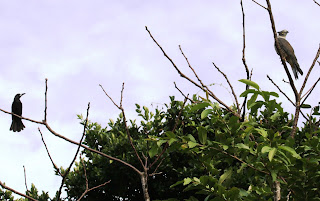 Then Butcher Bird increased the volume of his song and said something I didn't understand but it got Crested Hawk's attention. 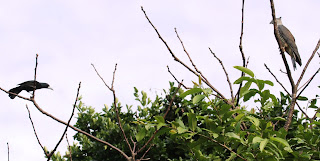 Crested Hawk decided he would just ignore old Butcher Bird as he was not going to give up his place in the sun. 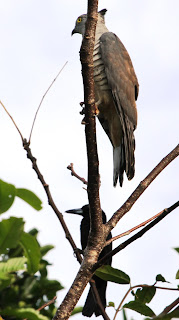 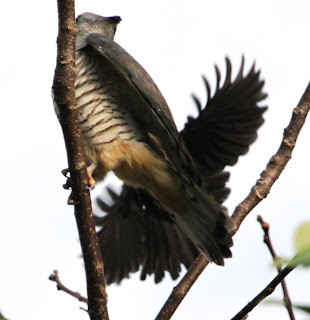 Crested Hawk was knocked off his perch.


Butcher Bird went to a nearby tree to gloat. 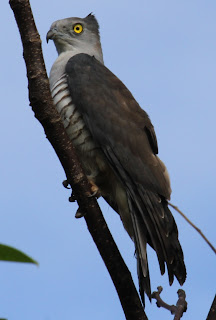 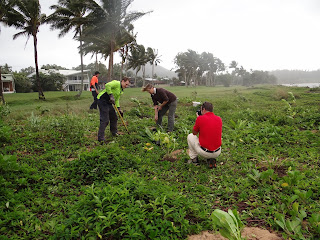 The gale-force winds and rain did not stop the Cassowary Coast Alliance Guerrilla Gardeners and another planting was carried out this week.

The photo shows Liz Gallie helped by Nicolas Chaumont plant a beach calaphyllum, Calophyllum inophyllum, on the foreshore at The Coconuts. Quentin Andres is in the background, Nicolas and Quentin are visiting Innisfail from Strasbourg and are very interested in the environment of the Wet Tropics. In the foreground of the photo John Flynn from the Innisfail Advocate is recording the event. 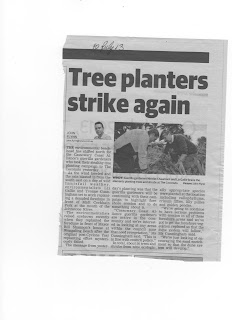 The foreshore vegetation at the Coconuts and Flying Fish Point has been illegally removed, primarily so the residents can get a better sea- view!!

Flying Fish Point is on the northern side of the Johnstone River and erosion of the foreshore in this area has cost ratepayers and taxpayers millions of dollars to rectify. However, residents are still reluctant to come to terms with the reason for the erosion and are not participating in replacing the foreshore vegetation. 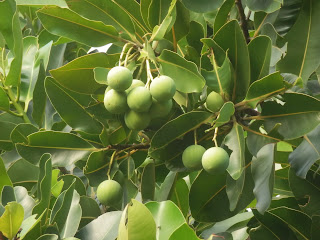 With Governments now adopting a policy of retreat when dealing with waterfront properties, homeowners unfortunately, will all to soon have to face the reality of a 'sea view'.

The amazing beach calophyllums are now in fruit. 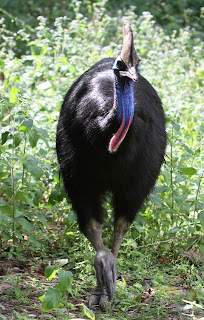 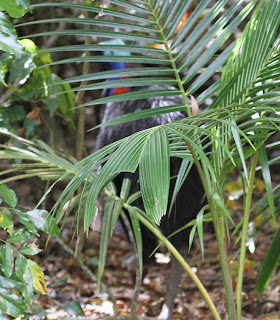 Cassowary 'Snout' turned up yesterday. He was in a great hurry striding past me and into the mangroves quickly disappearing from sight.
It was disappointing to see him alone as it is two months now since he went off with the matriarch Jessie. This is the second year when he has not been successful in raising chicks. 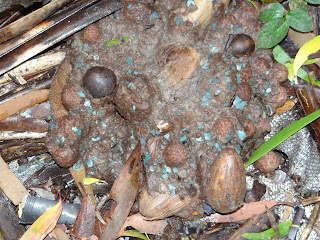 He left behind a scat full of Quandong fruit. 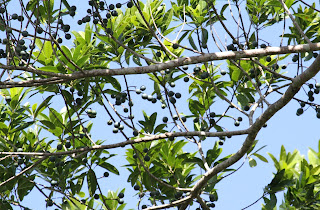 The Quandong Elaeocarpus Eumundi fruit are ripe and they are without doubt the favourite food of the cassowary.

Although this quandong does not have a lot of fruit on the seed it is however still quite pleasant to eat. It is certainly welcome when, on a hot day, you come across a tree full of ripe fruit. The fruit is high in vitamin C and when eaten gives an energy boost and refreshes the mouth.

The fruit is coloured bright blue and the colour stands out in the green rainforest canopy. 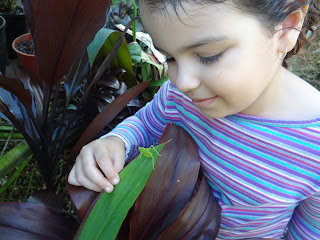 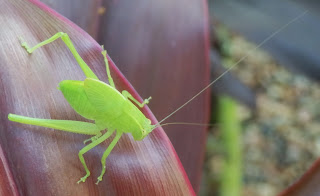 Innisfail has a new budding naturalist in little Ainsley.  Ainsley visited the nursery today and quickly found a range of insects to examine. This little Leaf Katydid with its long antenna and amazing camouflage was particularly fascinating to Ainsley. 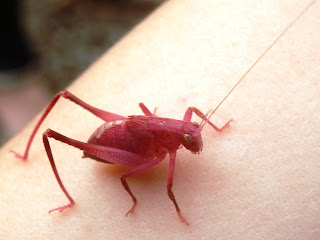 This little red cricket was the centre of attention and seemed to enjoy all the fuss.

The damp, warmer than normal weather has brought the insects out early this year. Mosquitoes are also back again and record numbers of imported cases of dengue fever have been reported in cairns.

It appears with the mild, wet winter the mosquitoes are over-wintering and it is of concern that they will have a head start when the normal mosquito season starts next year. 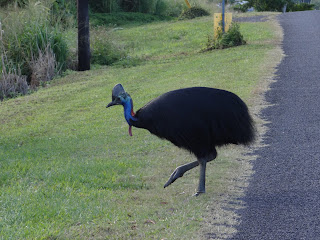 Young cassowary Rosie is moving around at the top of the hill, she moves from the melaleuca swamp on the ocean side down to the mangroves on the river every day. However there has been no sightings reported of any of the other Coquette Point cassowaries, with the exception of the one appearance of Snout this week.  With the rainforest now producing abundant fruit most of the cassowaries are remaining within the protection of their habitat. 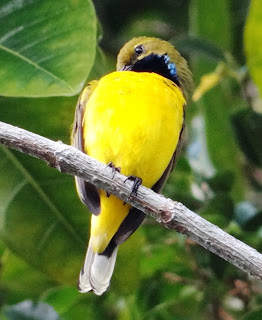 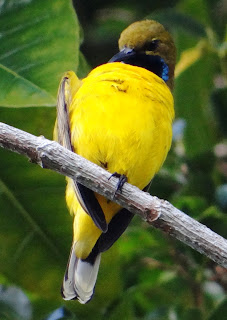 As soon as the rain-clouds clear for a moment the sunbirds are out to play and preen. They are in a frenzy of activity and the males have been singing courtship songs to uninterested females. As soon as this rain clears I think there will be a hive of building activity.