Like an unwelcome visitor the monsoon surged and dropped down on January 17. Two lows formed on the trough, one in the white-hot waters of the Gulf of Carpentaria and was destined to become tropical cyclone Oswald on the January 21- but only for 12 hours. The weather system soon reverted to a tropical low and danced in the Gulf for a week before beginning its move south. The BOM computer models gave conflicting forecasts on Oswald's movement and at one stage had it sitting over the southern Atherton Tablelands for a couple of days. This area is the catchment for the Johnstone River and if it happened Innisfail would flood. Fortunately for us, but not for others, the system moved over the Tully River catchment and flooded Tully followed by every other town along the eastern seaboard before it moved out to sea at Sydney on January 29.  Flood-waters are still rising in Rockhampton and today the people of north Bundaberg are being allowed in to view the devastation left behind after the highest flood in living memory hit their town. 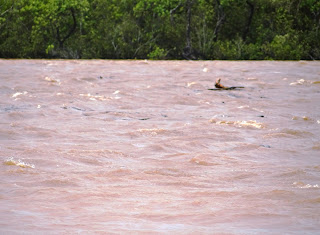 The Innisfail catchment received 600mm of rain from Oswald and the Johnstone River ran a bunker with much debris carried out to sea. King tides over the week exacerbated the flooding but did help the river flush.
Oswald moved south and as it passed over Innisfail we experience gale force winds for 12 hours. When it passed we were left in unsettled conditions behind the monsoon. Afternoon storms moved down from the Atherton Tablelands and brought brief, welcome relief from the heat. We are now experiencing hot north-westerly winds and a heat wave which has lasted for six days breaking a record for the most number of consecutive days over 35degrees  and with humidity in the high eighties.

As Oswald moved down over central Queensland causing floods and landslides the Telstra cable carrying all northern commutations lines was disabled along with the back-up cable. Most of Saturday and Sunday there was no telecommunications with the rest of the world, including the emergency 000 phone, and so there was no web-log from me last weekend.

However, what was remarkable, in this instance, when the weather system passed the speed in which the river went from muddy brown to crystal clear. 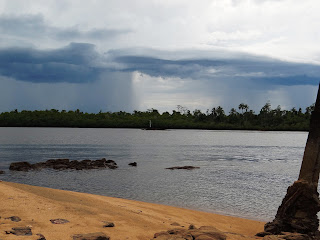 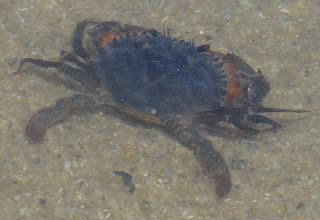 When the river cleared I saw hundreds of purple mud crabs  swimming in the clear shallows of the Johnstone River. 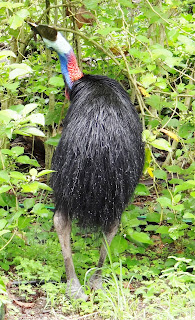 The cassowaries are not in the least perturbed by the rain and with their feather laden with rain drops they continue to harvest fruits and not even bother to shake dry. The photo shows 'Snout' eating the ripe fruit from an introduced weed, devil's fig. This weed is used as a disease resistant root stock on which to graft tomatoes and eggplant. The fruit is also a favourite of pigeons including the Torres Imperial.
However, in the heat the cassowaries suffer and like to spend their days sitting in water. The heat has also curbed their territorial battles and I noticed old Snout didn't bother to get out of the swamp when young Rosie showed up looking for a feed.
It is always interesting to watch the animals cope with extreme weather and unlike cassowary  kookaburra does not like getting his feathers wet. When the sun came out he went to some trouble to find a spot in the open to dry off, stretching one wing out at a time to catch the morning sun.. 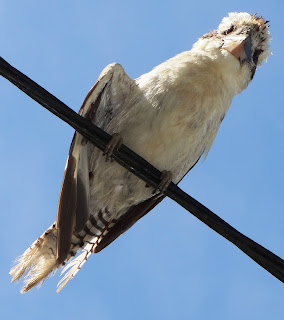 The good rainfall has turned the grass from brown to green and the Agile Wallabies are greedily grabbing large mouthfuls of sweet grass. 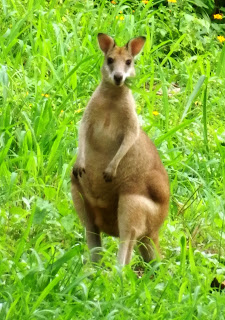 Food is abundant at the moment and Lace Monitor had a telling bump in his belly large enough to be a small wallaby. 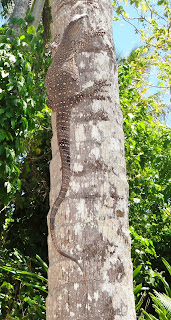 He was so immobilised by the meal in his belly I was able to approach him and take this close up of his amazing skin patterns.
Lace Monitor in a trance as he digested a large meal. 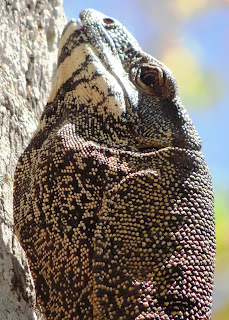 My 70th birthday party was planned for the 26th January and I thought there was little hope of holding it with the weather forecast. A full moon approaching on the 26th and the weather cleared and we had perfect conditions for a party. The Gunduy Aboriginal Dance Troupe entranced my guests with traditional dancing and a welcome to country. Gunduy means cassowary in the dyribal language. 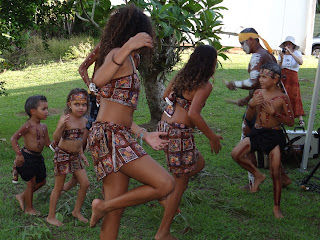 They were followed by my friend from Tokelau dancing. Ian Rule's band played music to midnight. A wonderful night under the stars. Next birthday party 100 years, 26 January 2043. Are you coming?
While we are sweltering in the heat in the cool understory of the rainforest, the Fan Palms, Licuala ramasayii, are in flower, their white inflorescence shining in the dim light. 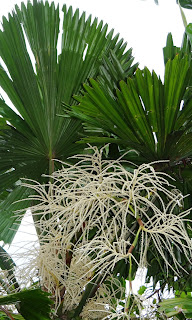 At the roadside edge close to the rainforest pairs of peaceful doves softly coocoo to each other as they feast on seeds amidst the grass and leaf litter. 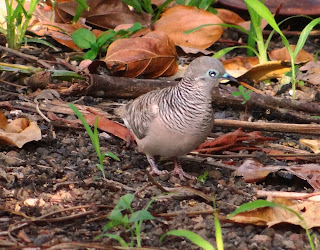 While all around them a flutter of bird-wing butterflies have gone into a frenzy mating and laying eggs in the hot humid conditions.
Male on lower right checking out the female. 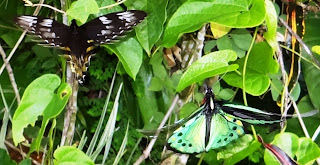 I reported in the last post what I thought was an outbreak of Chytrid fungus in the white-lipped tree frogs. Deborah from Frog Safe has contacted me and advised that Chytrid fungus is a cool climate pathogen and only shows up in FNQ during our winter months. The frog in my photo does indeed have a problem which is consistent with a Fusarium fungus, a drought tolerant soil fungus. Other soil diseases are likely to be involved and parasites are also likely. The White-lipped is particular prone to
more problems than any other frog species up here. Frog Safe believe there is a primary protagonist involved, which could be a chemical or a pathogen, which is disabling the frogs immune  system. However, they have never been able to secure the funds to get appropriate research done.
Cheers from the Queensland sauna,
Yvonne. 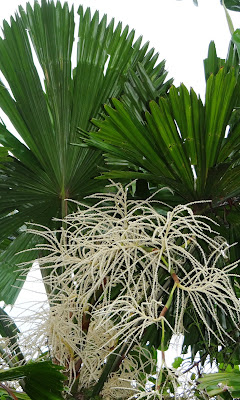