Hello from murky Ninds Creek,
On Wednesday my neighbour John Kristin phoned me about a dead, skinned crocodile floating in Ninds Creek, a tributary of the Johnstone River.  John had gone down to the Creek to do some work on his boat, which is anchored there, and he discovered a dead crocodile caught in his mooring lines. The crocodile had been skinned and the head cut from the body, it was floating nearby, John could not find any evidence of a bullet but there was jagged flesh around the head as if someone had removed flesh. As the carcass was not smelling and there were no flies present John believes the crocodile was killed and skinned in the early hours of Wednesday morning, just a few hours before he found it.

,I phoned Queensland Parks and Wildlife Service and within half an hour a ranger came to investigate. Unfortunately the ranger did not have a boat and apparently is not permitted to go in private boats, however, he did make a report of the incident. We sent the photos to QPWS.  The body of the crocodile was not removed and the next day it was still floating, with the tide, in and out of Ninds Creek.
Both John and I and other residents have heard, very late at night, rifle fire coming from the river, of course none of us have ever investigated as we all deem it unsafe. If there are people in boats with guns late at night on the river it is perhaps not safe for any other person to go out in a boat at night on the Johnstone River! With the barra season in full swing lots of families do go out at night on the river to fish.
A ridge of high pressure has brought a cool breeze along the coast with good rains every night. Although it is a relief to have the rain, wet at night and sunny during the day are the ideal conditions for breeding mosquitoes and we have lots of mosquitoes at the moment.  Over 50 cases of dengue fever, mostly type 1 have been recorded in Cairns, none in Innisfail - so far. We must be mindful to clean up mosquito breeding areas around the home and encourage the creatures which eat mosquitoes, like frogs, dragonflies and spiders, to proliferate by not using chemicals that kill these creatures when they can bring a balance to our mad world. 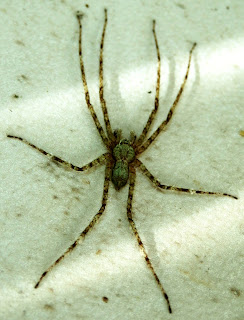 Green Water Spider found on a chair in the nursery. 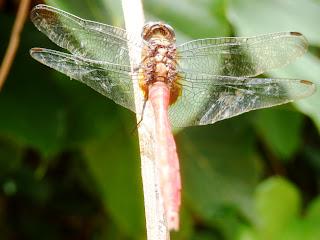 On Monday morning I heard the unmistakable call of the black cockatoos. A flock of about 20 birds flew from town to the Coquette Point beach.  I see them every couple of days either flying to or coming back from the foreshore..

The Black Cockatoos head straight for the Johnstone 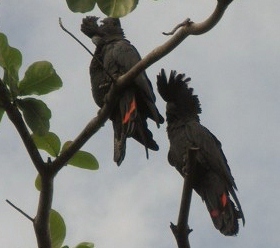 River Almond trees growing along the foreshore, they eat the pulp from the outside and the nuts from the inside of this tree's fruit.
They are wonderfully playful and very noisy. Other people have told me there is a flock of 40 birds south of Innisfail.
I was surprised to see Johnstone River Almond fruit in cassowary scats. I had not observed this before, as I apparently have a fetish for taking photos of cassowary scats I did a search and could not find these fruits in any of the dozens of photos previously over the years of the scats. It is good to know this is another cassowary food tree.
Also in the scat were the seeds from the 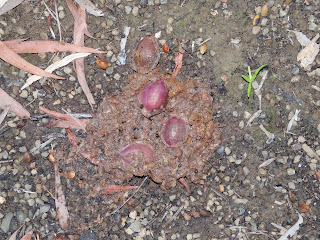 noxious weeds pond apple and guava. During the papaya fruit-fly outbreak in FNQ the Department
of Primary Industries led a concerted effort to eradicate plants which were host to the fruit fly such as native bananas, guavas and pond apple. Fifteen years later the pond apples and guavas are as widespread as ever but the native bananas are all but wiped-out of the coastal rainforest and the native bananas were a primary all year food for Cassowaries. 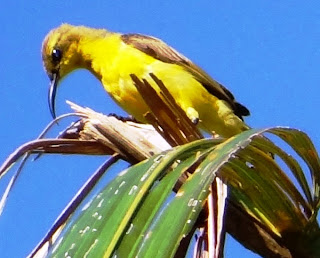 The sunbirds are again in a nesting frenzy.
Damage done to the terminals of plant branches in cyclone Oswald has become an easy source of building material. Above, the broken frond of an Alexandre palm is being stripped by this female sunbird for building material for her nest.
While the sunbirds are busy building nest this season's butcher birds have finished nesting and the babies have all fledged. Lately I have seen a good number of juvenile butcher birds hunting around the nursery and through the open forest for anything that moves; grasshoppers, spiders, lizards and frogs. Butcher birds have the most wonderful song and they are superb hunters, just like hawks. 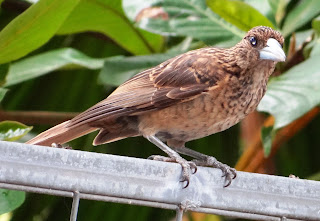 Over the last couple of weeks we have experience spring tides, with tide range between a high of 3.40 metres to a low of .86 metres. This has energised the river and swept out a lot of debris, much of the debris has been deposited in large floating islands sitting around the mangroves and creating a potential hazard for speed boats travelling at speed at night. Debris like this quickly turns into detritus and  becomes the main food source for crabs and prawns.
Rivers are dynamic systems and in just a few day everything has changed. We have now entered a period of neap tides where there is very little difference between high and low water.  Now the flow of the river is relaxed and quite. 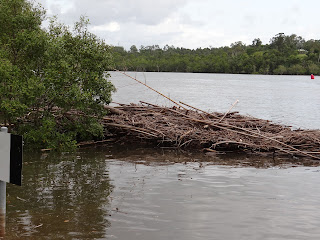 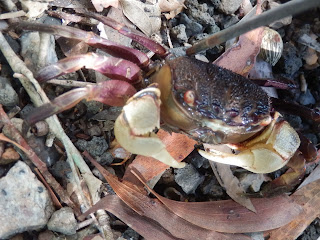 The high tides chased the little mangrove
crabs from their holes and they have been scurrying around the nursery looking for a dry place to live.
I was taking the photo above when the crab retreated to a safe corner.
The crab withdrew its legs and burnished its 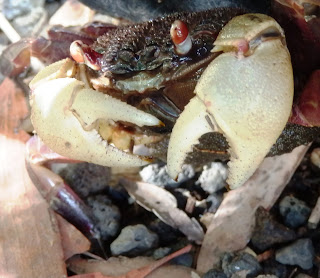 claws in a threatening motion towards me. The next minute major skink came running out from behind and over the top of crab to find sheltered behind my foot. I don't know who was more surprised the crab the skink or me. 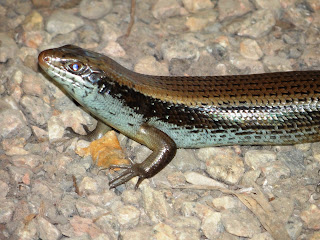 It just goes to show ever corner is a home to some creature.
The Torres imperial pigeons have left their nesting 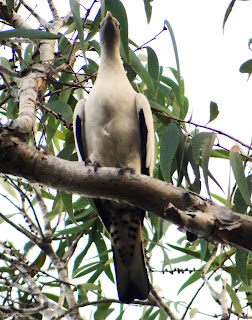 sites in the melaleuca trees and have shifted higher in the trees to sleep at night. The population here has increased by ten birds and I believe they are this years chicks. Lots of long mournful cooing during the early evening. It wont be long and they will be getting ready to journey north. 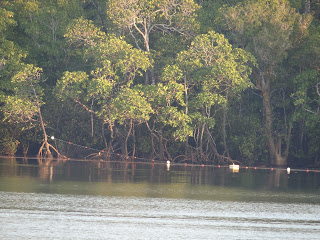 It was disappointing to see another illegal fishing net set in the river. The person who set this one was so arrogant they left it out until mid morning. It seems in Queensland it is now a free-for-all and the environment is the meat in the political sandwich.
Cheers for now from the beautiful banks of the Johnstone river,
Yvonne
Posted by Unknown at 02:56