This week a cool change brought some relief from heatwave conditions, but today the heat returned. This week the thermometer reached 37degrees and the cassowaries were heat-stressed. The water in the pond was so hot poor Snout could find no relief and sought refuge from the heat under the trees in my garden. 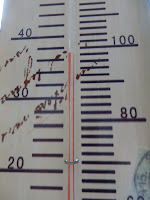 Good rain last night settled the dust and freshened the rainforest. It is most unusual for February to be dry and to even think of wishing for rain at this time of the year is surely playing with lady luck, however, without the cloud cover that is associated with the rain the sun and humidity is relentless.  All the indications are for rain to set in soon.

At Mission Beach the well know cassowary Sassy found relief from the heat in a pool of runoff water, click on the link to the Mission Beach Cassowaries web-log in the right hand tab to see more cassowary stories.
Below Snout suffering from heat-stress. 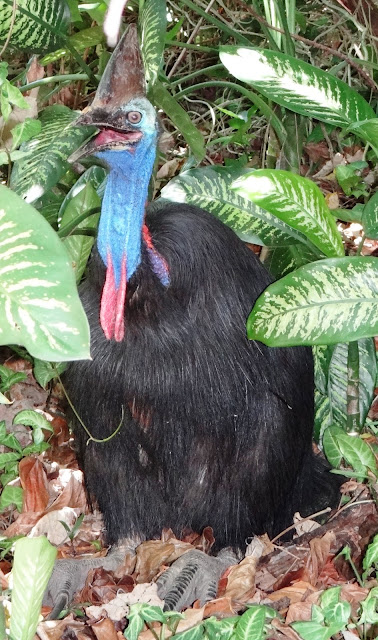 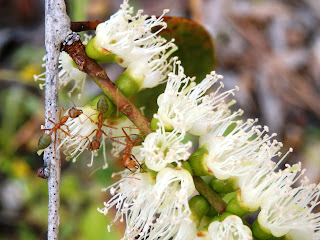 Melaleuca leucadendra is in flower and the
green ants are hungrily gathering the fragrant nectar. It is amazing to watch these little creatures and see the cooperation shown by the worker ants while gathering food. We have a lot to learn!
When I accidentally cut a leaf on which a migrating Queen green ant had chosen to make her new colony she looked at me in alarm and quickly tended to her eggs gathering them in a heap she splayed her body across the them  and courageously defended the eggs with her life. I relocated the leaf to a safe place and watched her transfer her eggs to a new site where she gathered new leaves together to start the colony again. 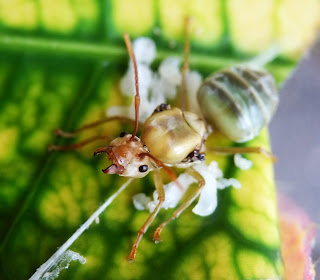 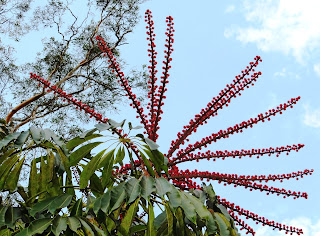 Like spokes from a wheel silhouetted against the hot summer sky the inflorescence of the umbrella tree Schefflera actinophylla offers its flowers which are full of high protein nectar. These flowers are a favourite of spectacled flying foxes by night and butterflies by day.
The juvenile metallic starlings have grown fat, 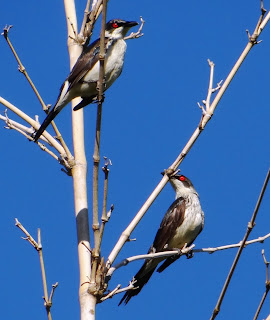 they are now the same size as their parents. There is so much fruit available at the moment and  they are confidently venturing forth in flocks by themselves to gather food. 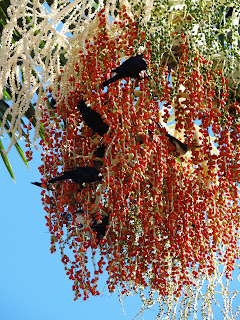 Juvenile and adult metallic starlings hungrily gather
the fruits from an Archontophoenix alexandrae palm.
The white fruits on the blush satinash 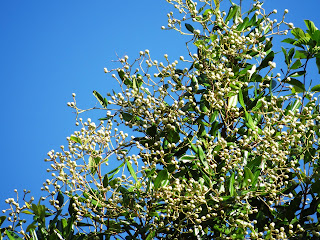 Acmena hemilampra are starting to fall rich pickings for the cassowaries and Torres imperial pigeons. 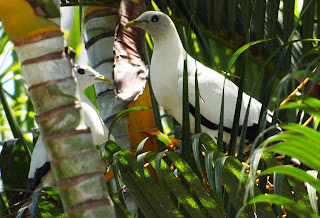 It is always fascinating to watch these
magnificent pigeons feed on rainforest's fruits. No sooner does a flock clumsily land on a food tree, knocking much fruit to the ground as it does, then count the minutes before a Cassowary turns up.   This week we were enjoying a cuppa under the palm trees when the Imperial pigeons arrived, within minutes Snout was there hungrily collecting the fruits as they fell from the feeding pigeons and I might add interested in the cake we were eating as well. 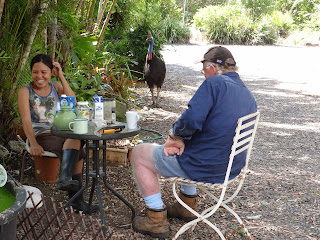 Gloria and Andrew ate the cake before Snout
got a chance to see it.
The rain and subsequent low pressure system 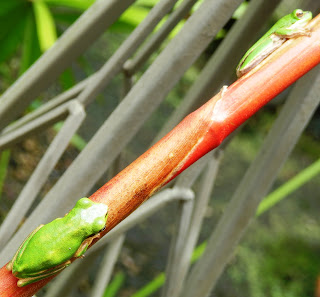 associated with cyclone Oswald sent the frogs into a mating frenzy. Within a day of Oswald
the little Eastern Dwarf frogs Litoria fallax laid eggs in ponds around the nursery. 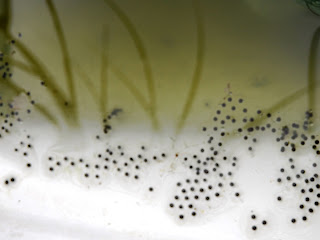 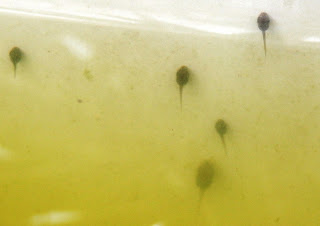 It took only ten days for the eggs of the Eastern Dwarf frog to hatch into tadpoles.
Hundreds of Northern Dwarf Treefrogs, 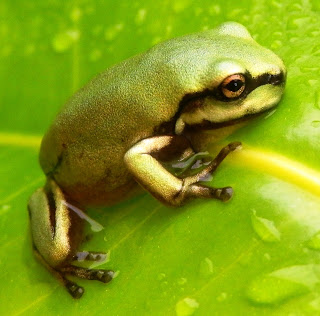 Litoria bicolor have emerged and can be found clinging to leaves in the swamp. Their high pitched wreeeeeek is a constant background noise whenever rain falls.
Coming home from 'a night out with the girls' last night I saw dozens of Striped Rocketfrogs, Litoria nasuta jumping across the road adjacent to the Sea Haven development site. Unfortunately many had fallen victim  to motor vehicles.
Heavy rain fall as I took this photo. 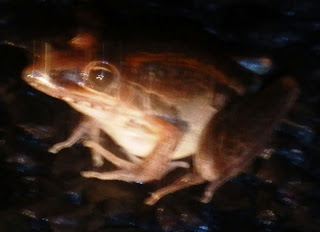 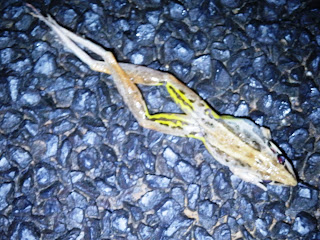 Dozen of Litoria nasuta dead on the Coquette Point road.
Let us hope next week will see the monsoon drop down over northern Australia and bring with it a  regular wet season.
cheers
Yvonne