Sam Dansey, a man of the forest and a poet this week completed his journey on planet Earth. Sam was in his mid eighties.
Before his retirement Sam was a senior ranger with Queensland Department of Forestry, he was a tree-marker. It was Sam's job to explore and map new areas of forest. He would access the value of the timber within the area and later decide, then mark, which trees were to be logged.
When politicians, media or conservations, and frequently all three together, would seek permission to see the logging sites, Sam was the man sent to liaise with the group.
This was a difficult job for Sam as he was a quite, private man who kept his own counsel. I never saw him annoyed not even when on one occasion the then Sydney director of the Wildness Society, who was part of a large party in Downey Creek that day, got himself lost. It was late in the afternoon and we had been delayed by the film crew. When we emerged from the rainforest we realised one of the party was missing. Sam calmly and firmly instructed us to stay put and he entered the forest as darkness closed around him. Within half an hour Sam returned with the shamefaced Wilderness Society director. Sam's face was inscrutable and there never was a word of criticism said.
How Sam must have hated to be given the job of nurse-maid to all of us.
Once I asked him had he ever seen an area of rainforest, so special, that he could not mark the trees. He looked directly at me and said  "Yes there is a place and no one will ever find it". I know Sam is in that special place now.

In the rainforest at Coquette Point the butterflies are busy laying eggs in the warm spring sunshine. 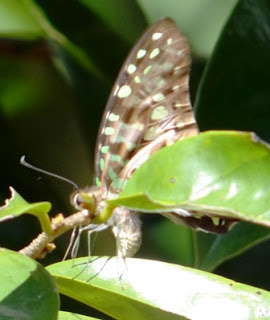 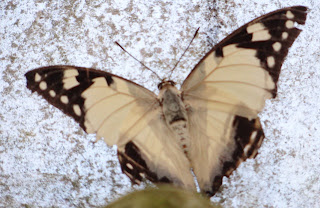 Tailed emperor near host tree cassia fistula
Native honey bees are swarming and finding new hive sites, while at the same time they are feasting on the abundance of pollen available from the spring flowers. As the bees load up with pollen they seem to defy gravity as they struggle to return to their hives with their harvest. 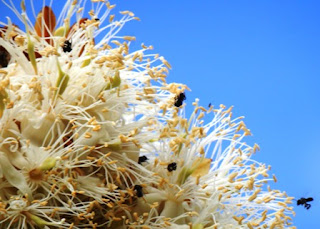 Native bees swarm around a blossom 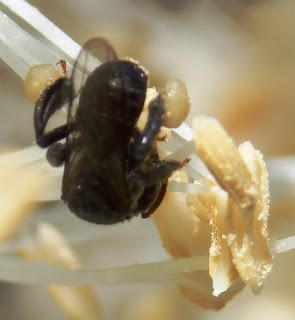 Loaded with nectar this bee struggles to fly. 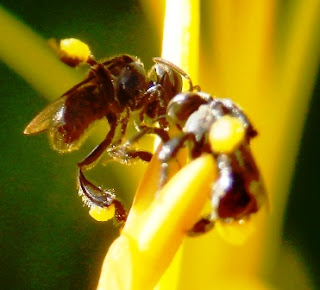 Three native bees compete to harvest  nectar
A sure sign that warm weather is approaching is given by the maturing matchbox beans. These beans form from the delicate white flower of Entada rheedii, the matchbox bean vine. This vine grows with great vigour and is one of the largest vines in the lowland rainforest. 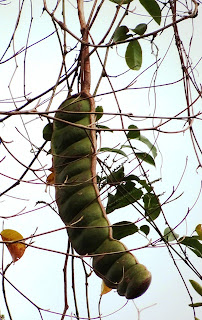 The matchbox bean can reach one metre in length and the seed pods were used by early settlers to keep matches dry.
On several occasions this week Cassowary 'Little Dad' has become separated from the chicks. My neighbours were altered when they heard the chicks long, high pitched calls. On  the last sighting on Thursday they were all back together.
Very early Monday morning I saw a what I thought was cassowary 'Little Dad' by himself.  He was behaving in a distressed state frilling his feathers and pacing restlessly in seemingly aimless directions. I approached him with the camera and noticed his beak was badly damaged and there were puncture marks behind his eye and fresh scratches on his casque. 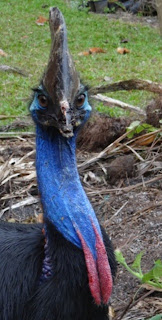 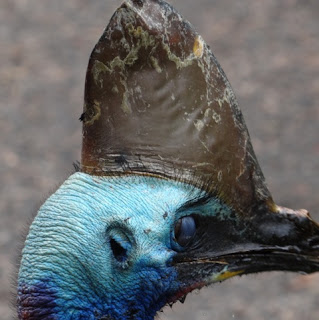 I called the cassowary hot line and two rangers investigated. I was concerned that the cassowaries chicks had been caught in a pig cage. However as I soon realised it was cassowary 'Snout'.
Whatever happened to 'Snout's' or his chicks I suppose we will never know. However, from his wounds he was in some altercations and now he is without his chicks.  I have seen him again twice since Monday and the fresh scare on his beak is drying up and the puncture marks behind his eye are drying.  His behaviour has settled down although, he still appears very nervous.
Meanwhile the fig tree, in its last days of fruiting for this season, is still attracting a procession of cassowaries. Dot and Don visit the tree at least twice a day. Jessie has returned and feasts early in the morning. The other old matriarch has also been visiting the tree every afternoon. She is very timid and will disappear at the first sight of a person. I was in the vegetable garden yesterday afternoon and hadn't at that stage picked the days papaws. I heard a loud noisy and saw her jump over two meters into the air to eat a paw paw. 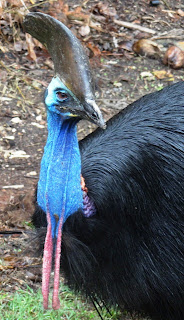 'Don' is growing a casque 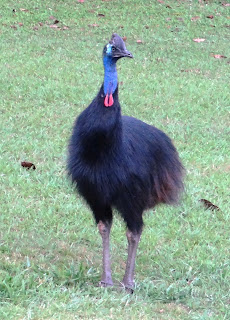 and is looking every bit a teen. 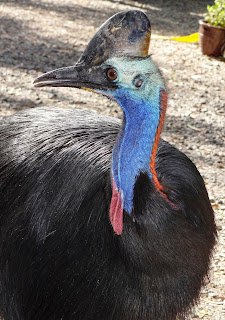 Dot is never far away and seems to hang around the fig tree for most of the day. 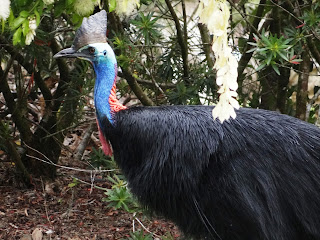 This old matriarch has been hanging around lately and I think she has her eye on young 'Dot'. Would love some suggestions for a name for this cassowary.
'Dot' is a male and was so called because of the white dot on his wattle. 'Dot' is almost four years old and has not mated as yet: 'Jessie' is his mother.
I was reading through copies of some of the 500 old objections to the proposed development of 27V Coquette Point in 1987. A number of the objections referred to the Little Tern nesting site and the cassowaries.  I have enclose two extracts (below) from the objections that show nothing has changed over the last 25 years.  The Little Tern nesting site and Cassowary habitat is still under threat.  Let us hope that if this development in 2012 ever goes to Council that this time we will get 500 objections plus and the natural values of Coquette Point will be seen to be valued. 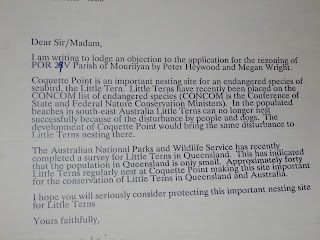 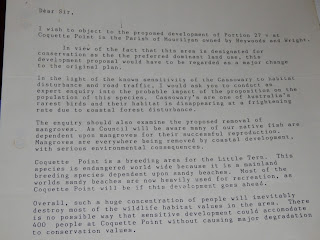 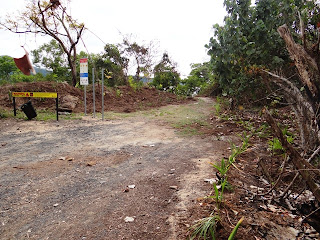 We have received good rain through the week and the new trees planted at the end of the road are growing well. The trees that were burnt in the fire have new leaves and should recover.  Unfortunately the Wet Tropics sign that was stolen has not been replaced. The vandalised sign which now shows dogs allowed has not been repaired to read NO DOGS ALLOWED. However, a new rubbish bin has been supplied.
Soon the Little Terns will be arriving and we need to have signage in place this year to prevent dogs disturbing the rookery. Hopefully Council will act soon.
Cheers for this week,
Yvonne.
Posted by Unknown at 06:02