I have been searching in dusty boxes for old files and have found the plans for the once envisaged Coquette Point marina resort. This proposed development was put to the Johnstone Shire Council in early November 1987. 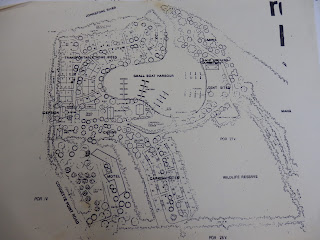 Plans show an entrance to a boat harbour through the mangrove forested esplanade. One dispute with locals at the time was that the marina entrance would have blocked public walking access to Sandy Beach.
At the time levels were taken on the site and it was found that 50% of 27V was less than one (1) metre above AHD.  Preliminary backhoe test pits indicated the low lying sections of the property, to the north and north-east, comprise marine and mangrove mud (acid sulphate), beach sand and alluvial soil deposits. There was a suggestion that to solve the problem of flooding "an approach may well be to fill the entire low lying area with sand dredged from the channel of the Johnstone River.
500 people wrote letters of objection to this development proposal and the Johnstone Shire Council  rejected the rezoning and the development application. 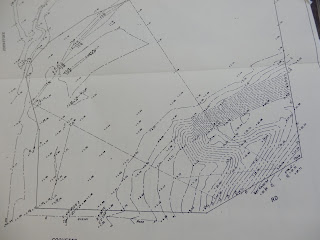 Now there is another bright idea to create an RV Park in this swamp!
Anyone wanting to write a letter of concern about this development can write to their local member, they should also copy the letter to danielle.carman@environment.gov.au
At the moment the development is being accessed under the EPBC Act and the developer must demonstrate that the development is not likely to have an impact on threatened species like the cassowary, little tern, beach stone curlew or black bitterns. The developer must also show that the World heritage ecosystem will not be impacted.
If anyone has any more information on such things as more Quoll sightings or better still photos please send them to me.
On most days this week I have seen 'Little Dad' and the chicks.

He walks quickly to the fig tree and when he has finished eating he with the chicks close behind enter the mangrove forest on the eastern side, heading for the beach. 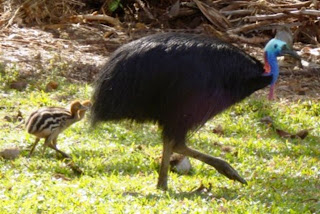 On Wednesday he saw himself in the reflection of the rear vision mirror of the old Nissan, of course he thought it was another cassowary. What followed is a good demonstration on how protective a cassowary dad is of his little chicks. 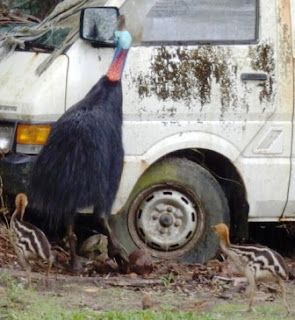 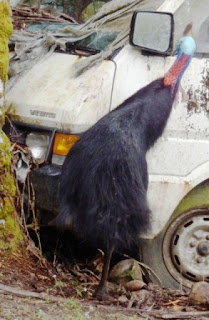 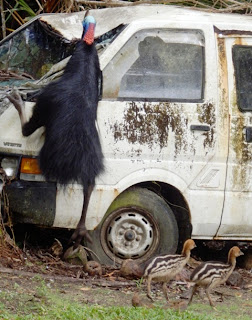 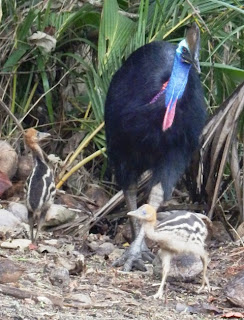 The old wreck of a van received more dints and the chicks ran for their life wondering what was going on.

Every week is a surprise with cassowaries around. This week an unnamed bird I had not seen since before cyclone 'Larry' turned up to partake of the figs. Somehow the message is out there and all the animals know that this tree is fruiting. 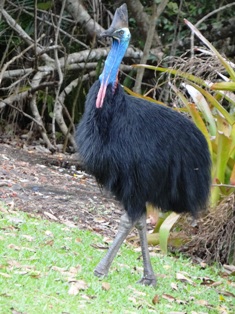 Dot arrives twice a day for her feed of figs and comes and goes via the beach. 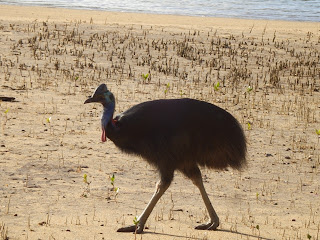 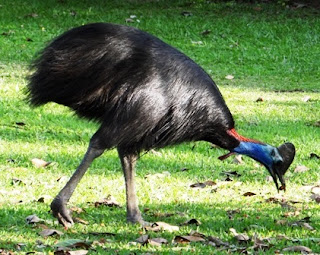 The Nutmeg pigeons are also visiting the fig tree on a twice daily basis and their calm cooing is a soothing balance to the busy chatter of the feasting fig birds and metallic starlings. 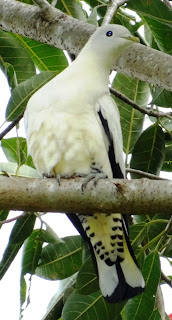 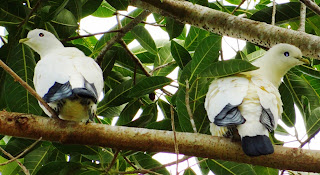 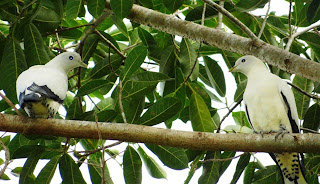 Noisy Rainbow lorikeets have discovered that the coral tree, Erythrina variegata is in flower. If ever a bird is designed for a flower than this is the one. It was difficult to see what was flower and where was bird. 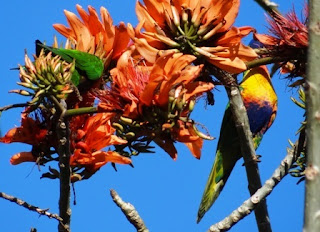 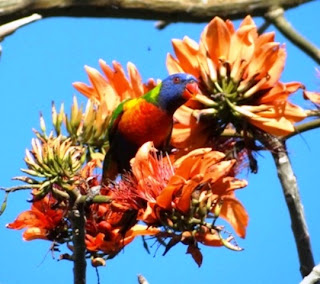 Snakes are very active at the moment and I have had lots of reports of Red-bellied blacks and  Night tigers. Martin swore he saw a Taipan on the road last night but when I went looking I could only find an Amethystine python. 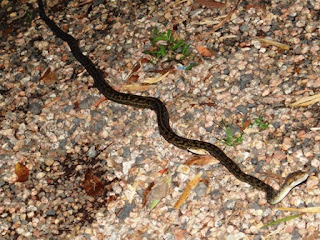