While exploring the Johnstone River in March1873, Lieutenant Johnstone wrote, 'The most noblest river of Australasia, bejewelled by its many cascades and waterfalls, brilliant blooms of many unknown flowers, and shades and shadows in the mountains, making one of the most sublime pictures.'

One of the brilliant blooms he saw could have been Dendrobium nindii. 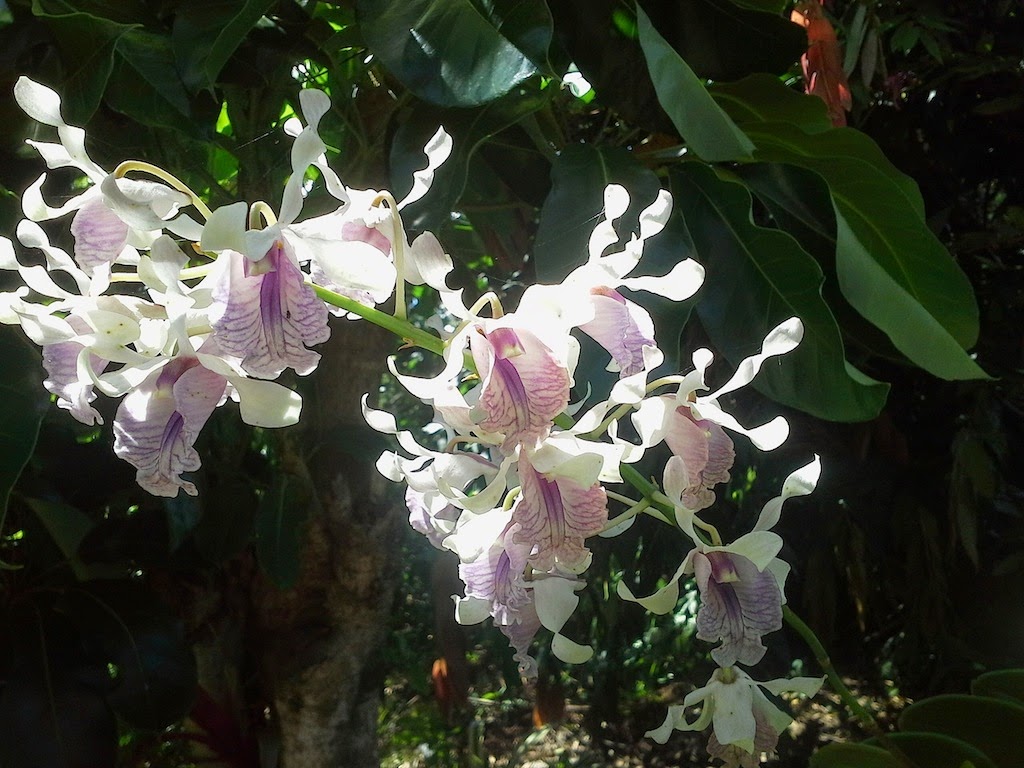 In September of that year the Colonial Secretary ordered Dalrymple to proceed to Cardwell to organise and take command of an expedition designed to explore all the rivers, bays and inlets north to the Endeavour River. Surveyor Ninds who was travelling with his own boat and party in search of sugar-lands, joined Dalrymple's expedition at Dunk Island. When they crossed to the mainland and explored Mourilyan Harbour Mr Nind found a beautiful new orchid in bloom. Subsequently it was named and described by Walter Hill, Dendrobium nindii.

Once this orchid was plentiful in its native habitat, now it is listed as endangered. It occurs within the Cape York and Wet Tropics coastal areas. The greatest threat to D nindii is the clearing of coastal habitats and the illegal collecting of this orchid from the wild.

Grahame Vallance took a photo of D nindii this week and kindly shared it for this blog. 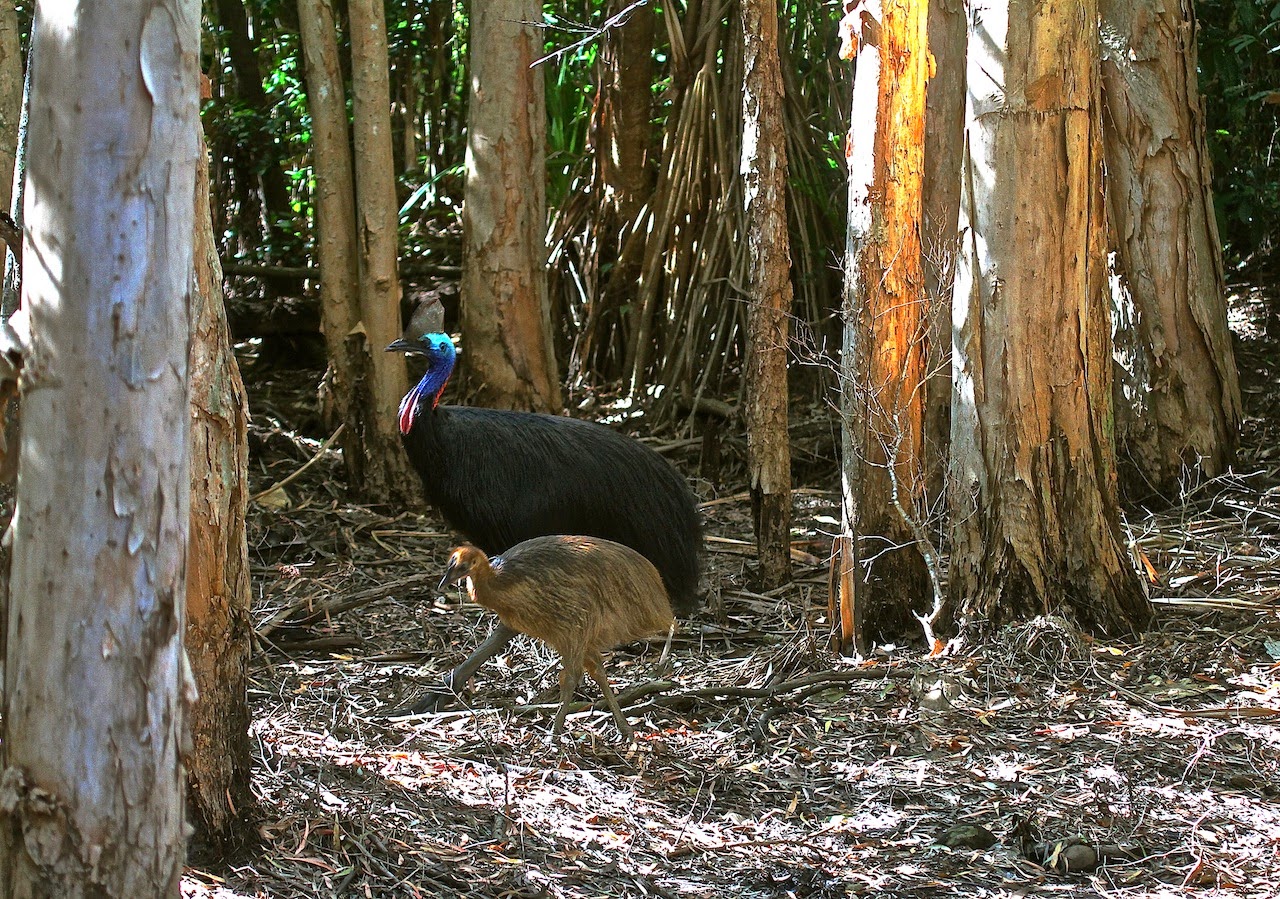 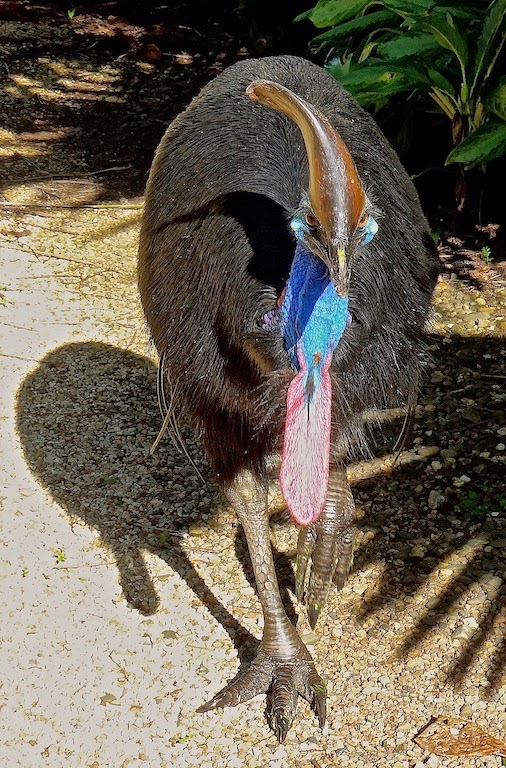 In the early morning sunlight on Tuesday I found Cassowary Snout and Ky walking in the paperbark, Melaleuca leucadendra, swamp. From the numerous cassowary footprints I have seen on the beach this week cassowaries are using the beach to move within their range  and as a place to hunt protein, such as crabs and snails. 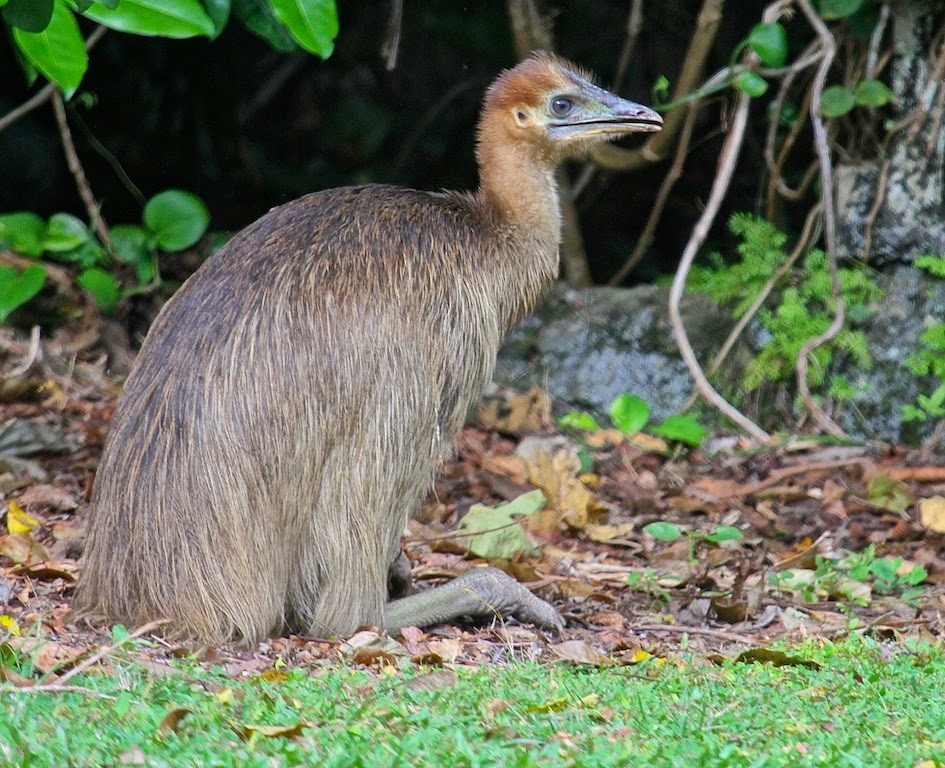 Matriarch cassowary Jessie is crossing into Snout's  range on a daily basis but I have not heard or seen any confrontations.

Little Ky often sits and snoozes while Snout searches for food, sometimes Snout walks away and Ky suddenly aware he is alone jumps to his feet and with a high pitched cheep, chases after his Dad. Dad is often waiting not far off. Its almost like a game of hide and seek. 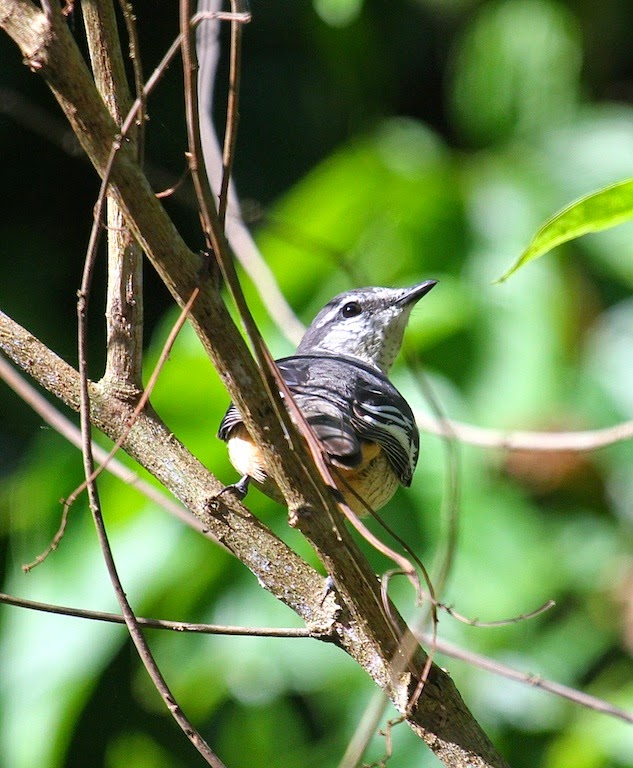 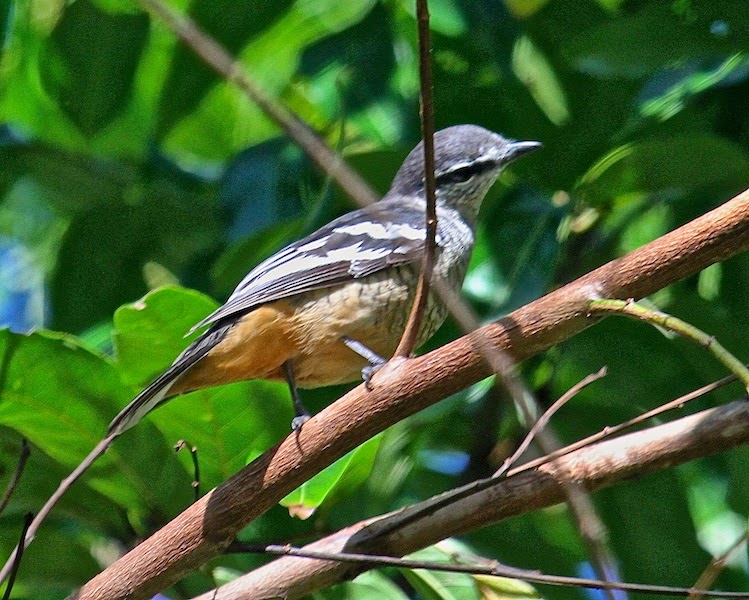 Varied Trillers have been very active in the trees all week taking advantage of the fine weather to catch insects. They are such active little birds.  Having caught an insect it is quickly consumed and the bird is instantly on the hunt
again. 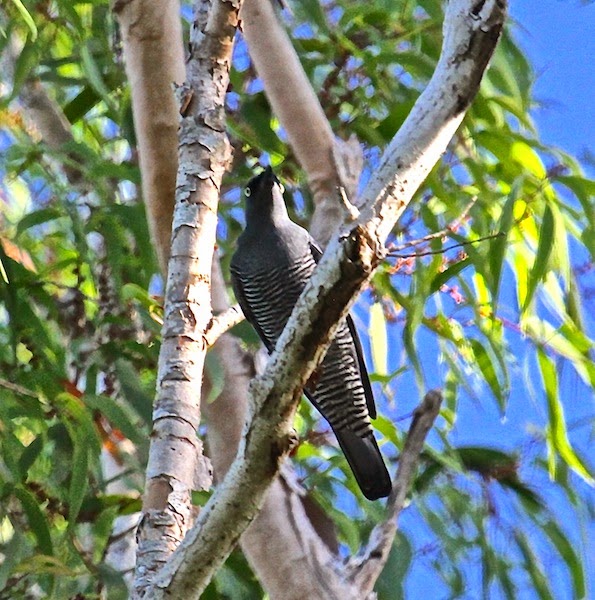 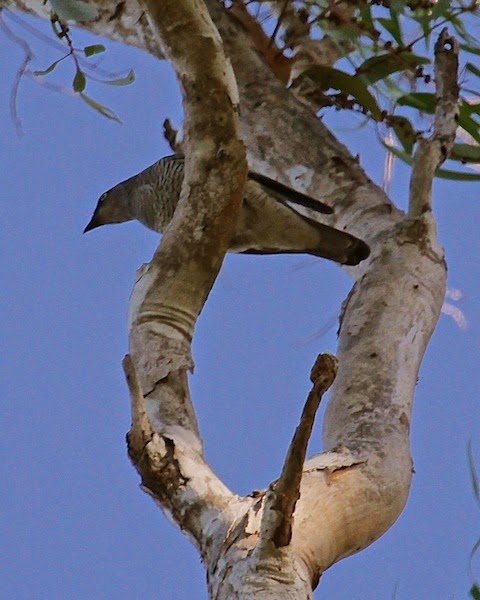 A small flock of Yellow-eyed cuckoo shrikes has been foraging on the seed of the butterfly tree, Melicope elleryana. When the birds finish eating they rest high in the canopy of the paperbark trees. 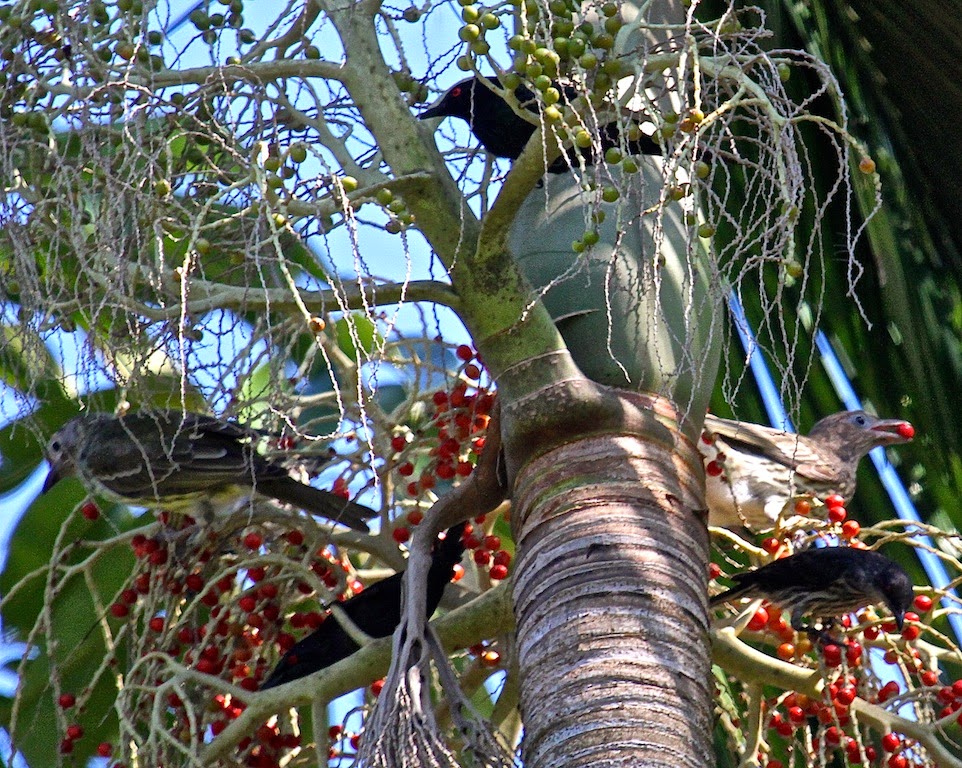 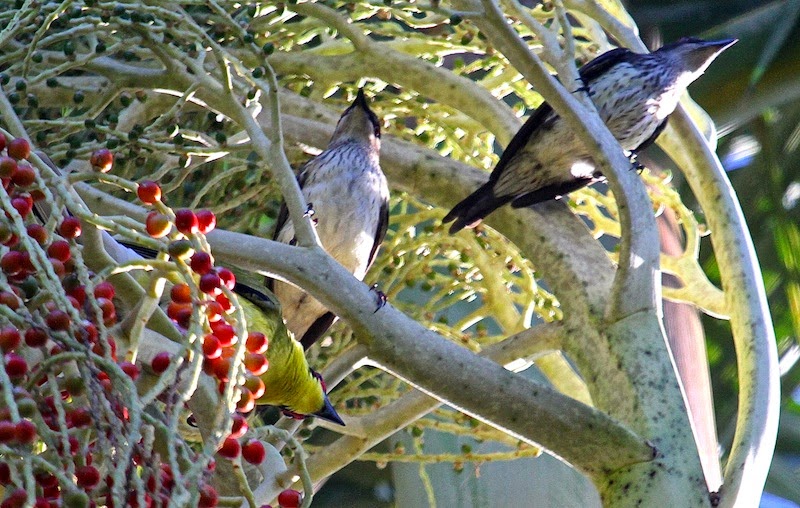 The fig bird on the left was actually hissing at the juvenile metallic starlings. They moved to the back of the palm seed stalk, only then did he continue feeding with his mate. 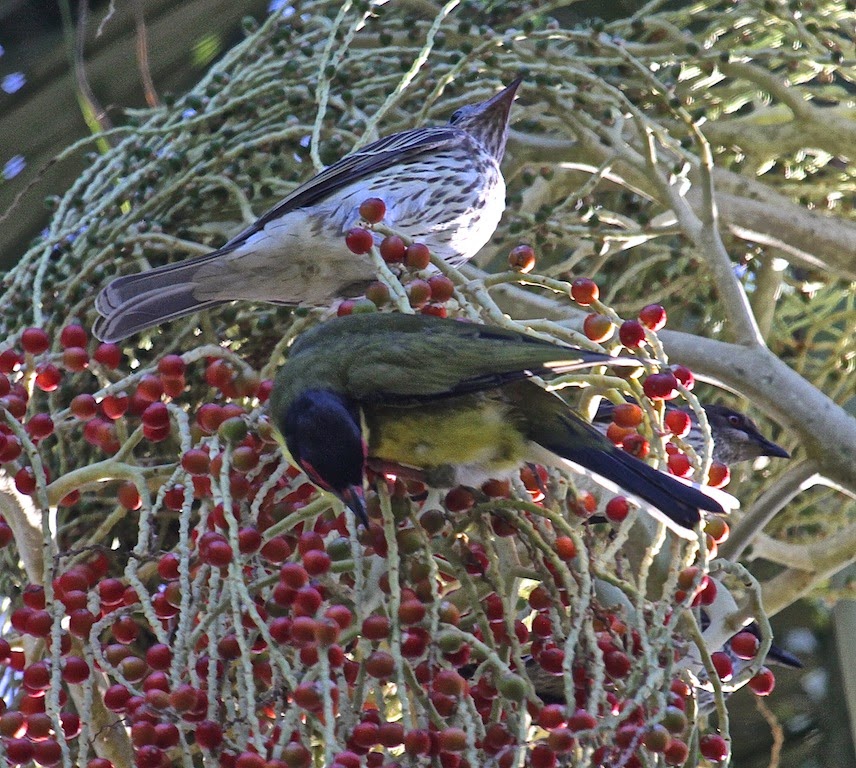 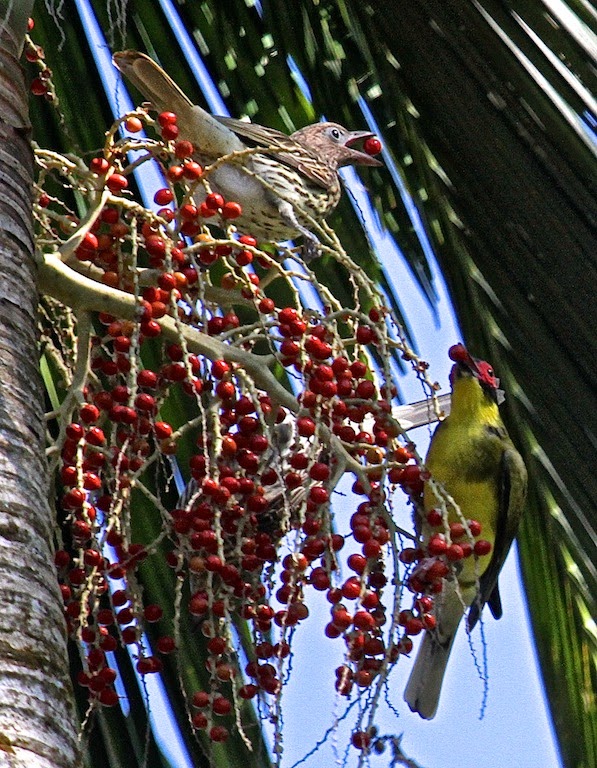 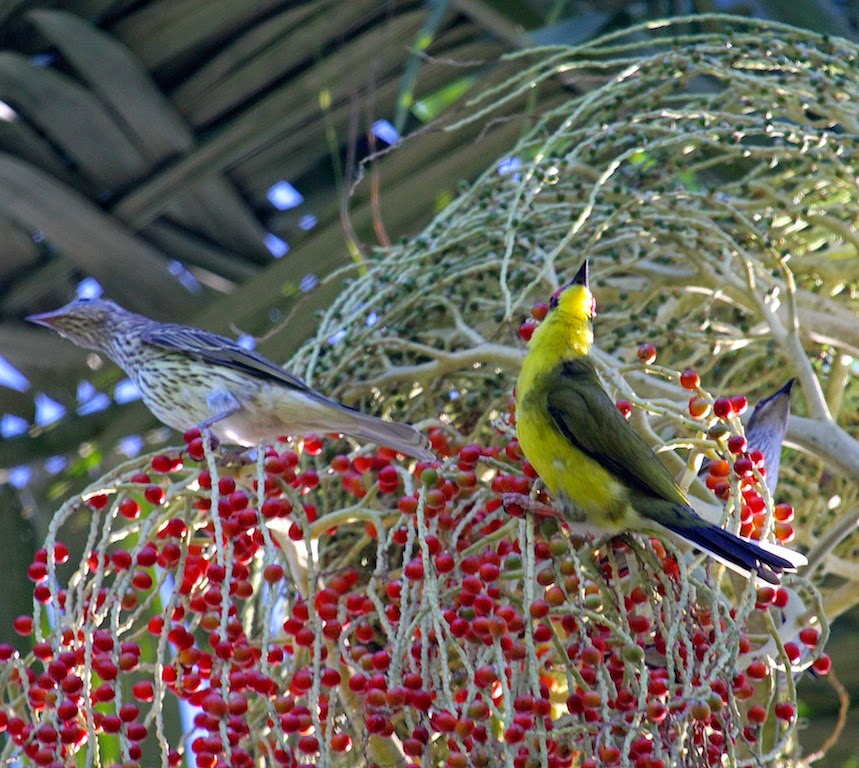 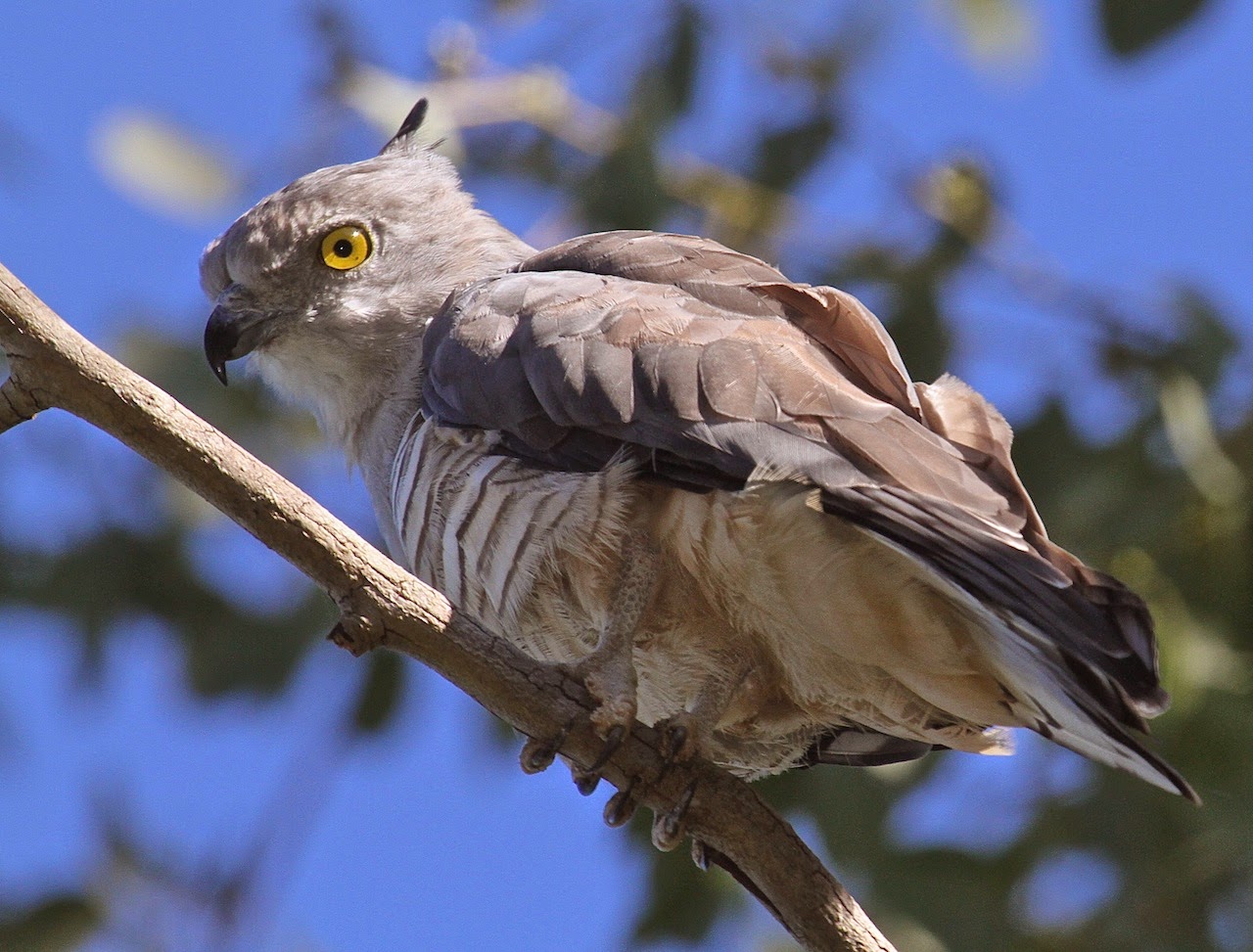 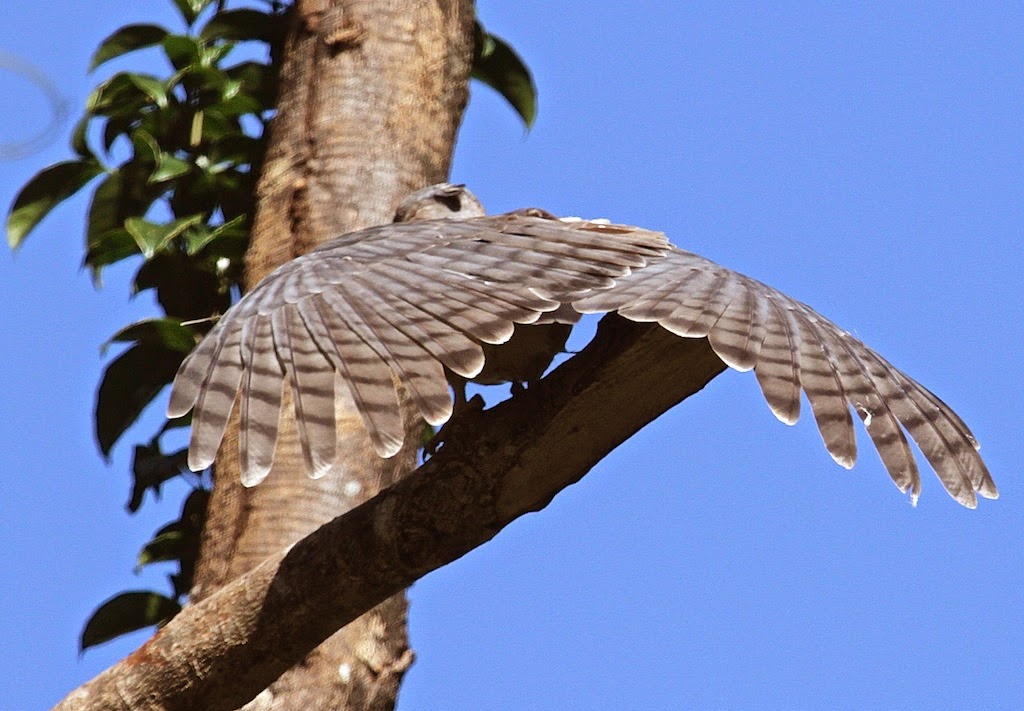 Crested hawk found a branch in the sun and spread his wings, sun baking for over an hour.

I went back from time to time to watch him and he would change position to take the sun on his front. Then he meticulously cleaned his feathers one at a time. 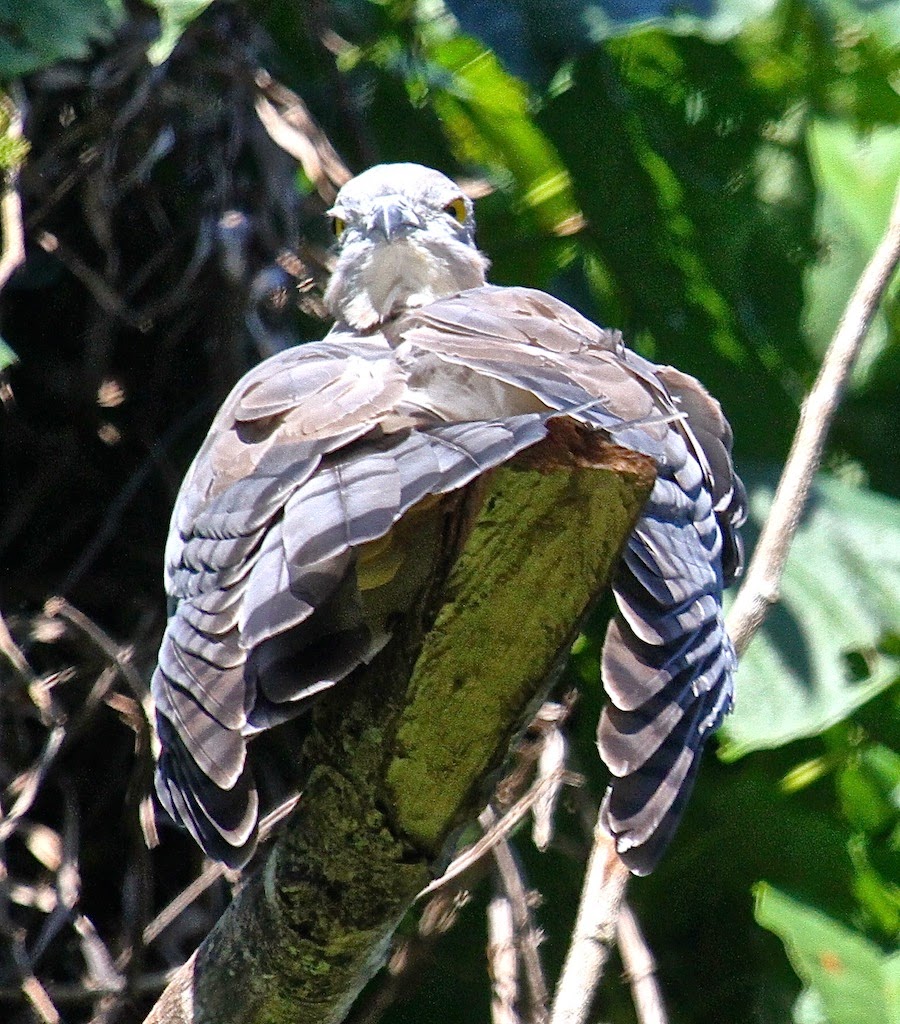 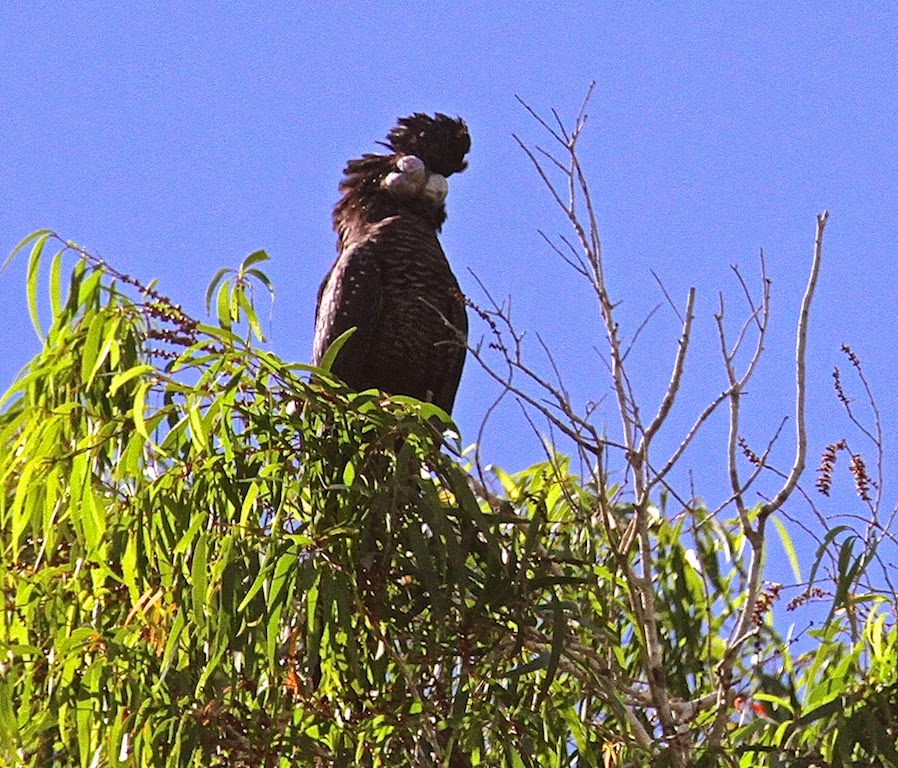 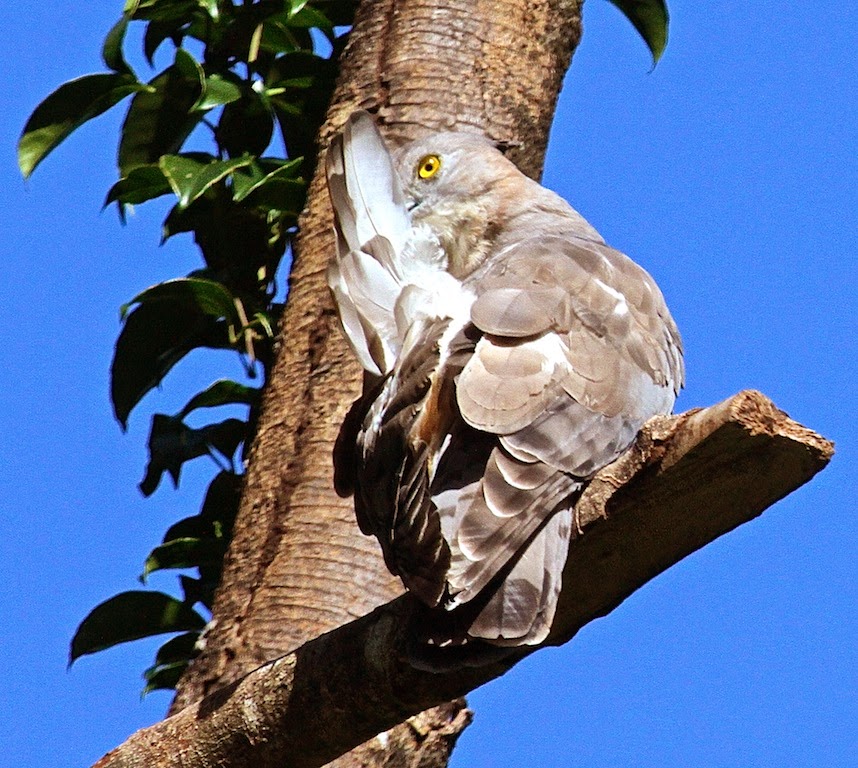 Every morning at 7am the black cockatoos fly down the Johnstone River, with great squawking, and every afternoon they return to town-base, just as noisily.
This week they were feeding on the seed of the paper bark trees. It is so peculiar to see them sitting on the small branches at the very top of the canopy of these 30 metre high trees, somehow balancing as they feed. 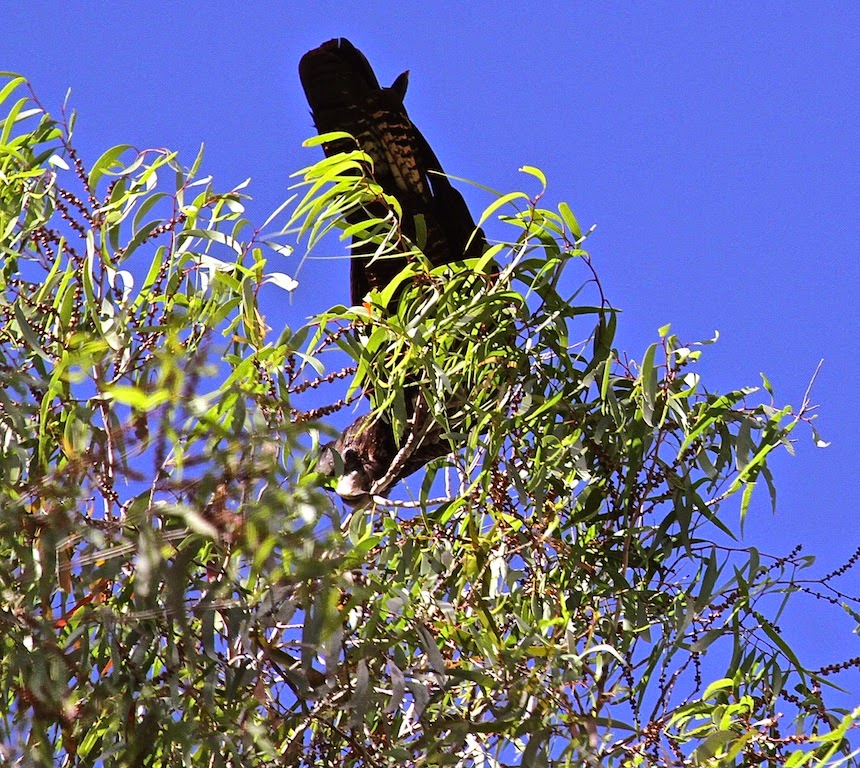 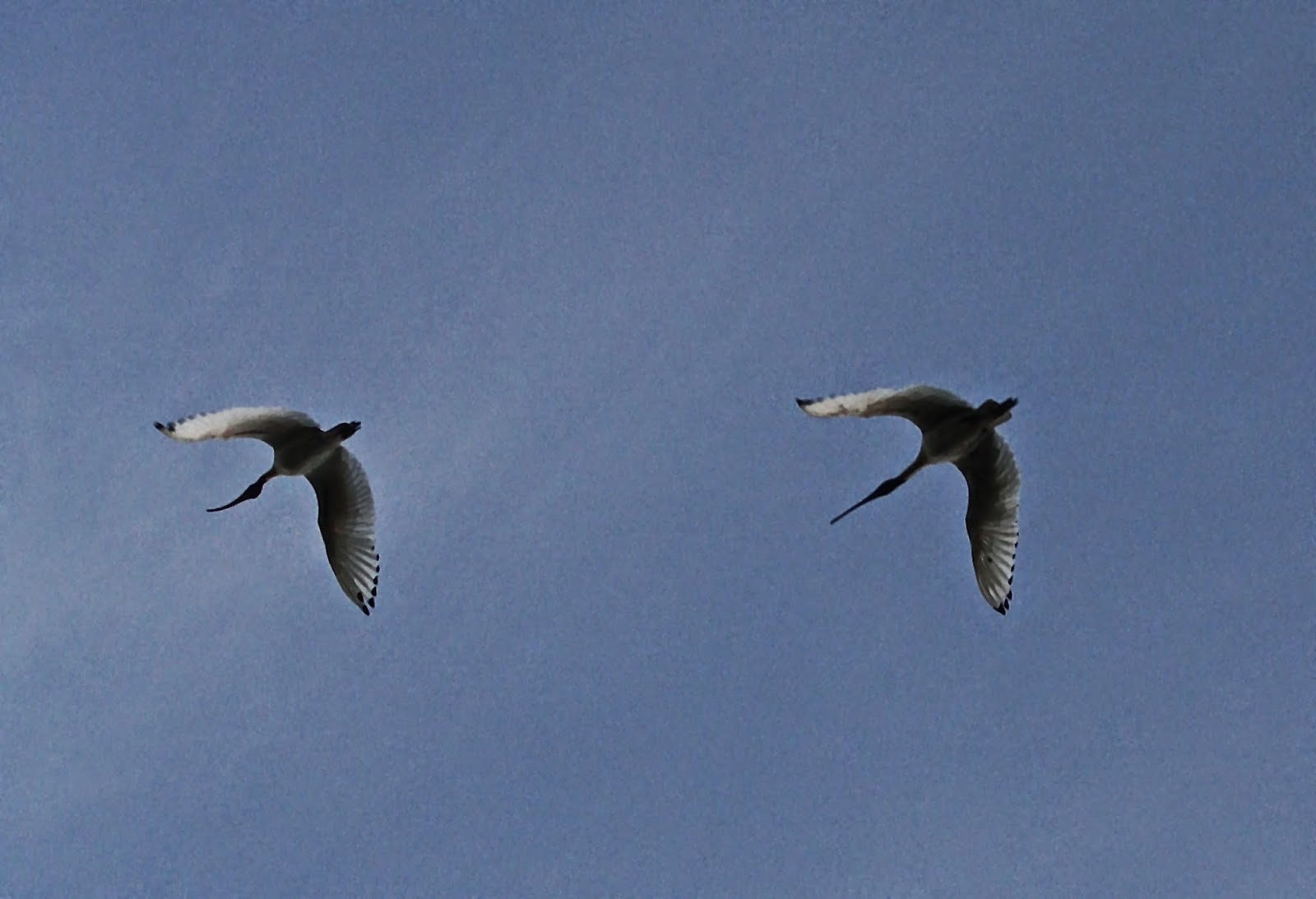 The Straw-necked Ibis have arrived and have been joined by White Ibis, they are feeding on lawns around town and also the mudflats at Coquette Point. Of a morning they leave earlier than the black cockatoos and return to nest in the town swamp in the late afternoon. They tend to fly in a little later after the black cockatoos, they manage to feed two or three hours longer than the cockatoos.

The female leaden flycatcher has also arrived. It seems the male birds arrive a good month before the female, perhaps she stays longer to care for her chicks, as their breeding is done in summer during their southern migration. 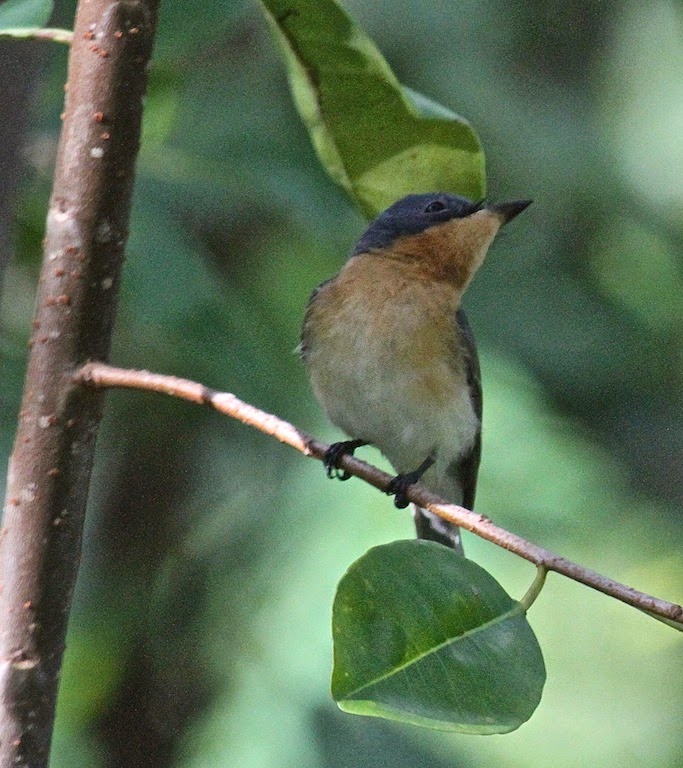 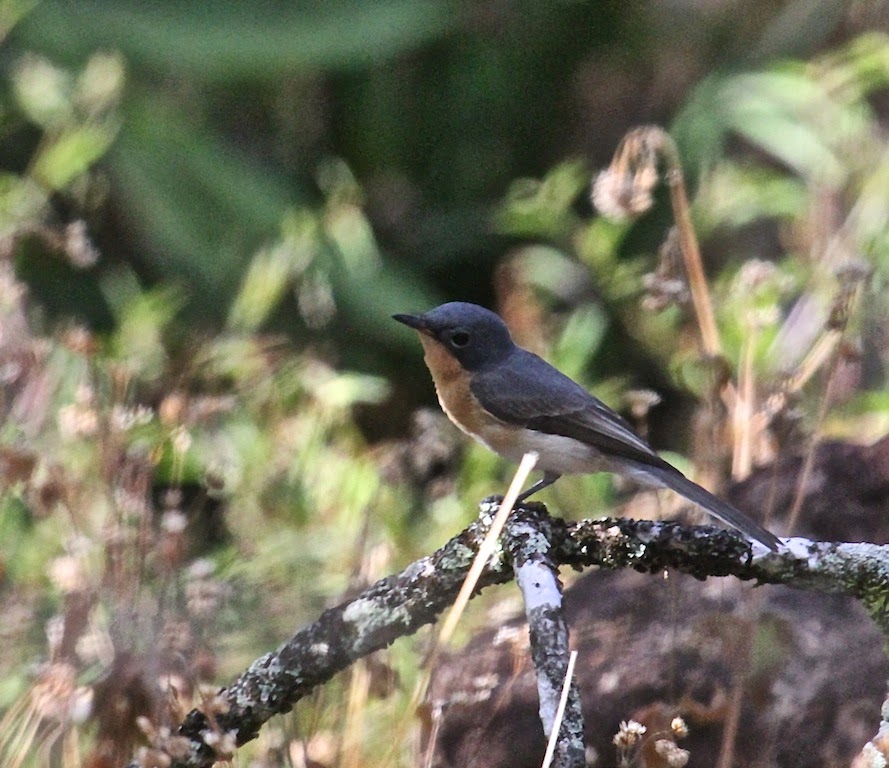 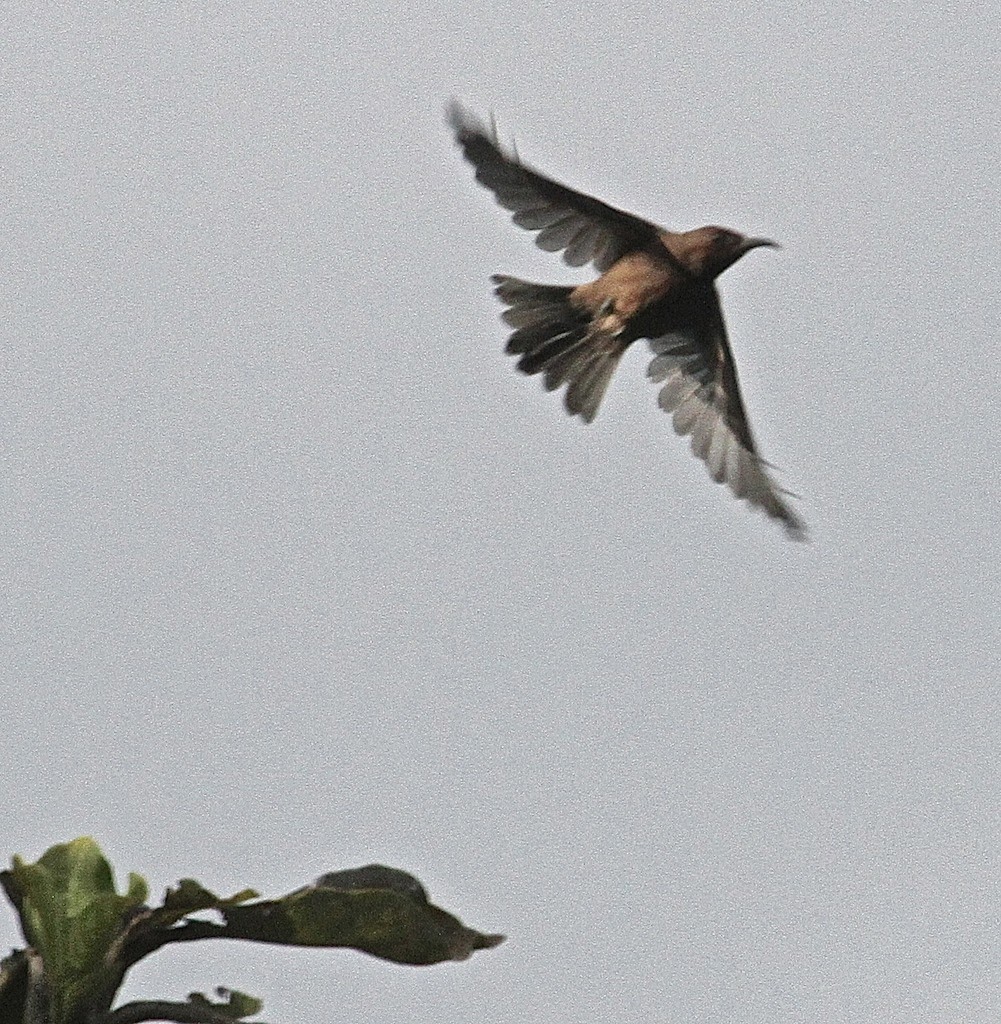 The dusky honeyeaters have been very active this week. Their numbers have returned to pre-cyclone Larry figures. I have observed several flocks around the Coquette Point area, consisting of around seven birds in each. 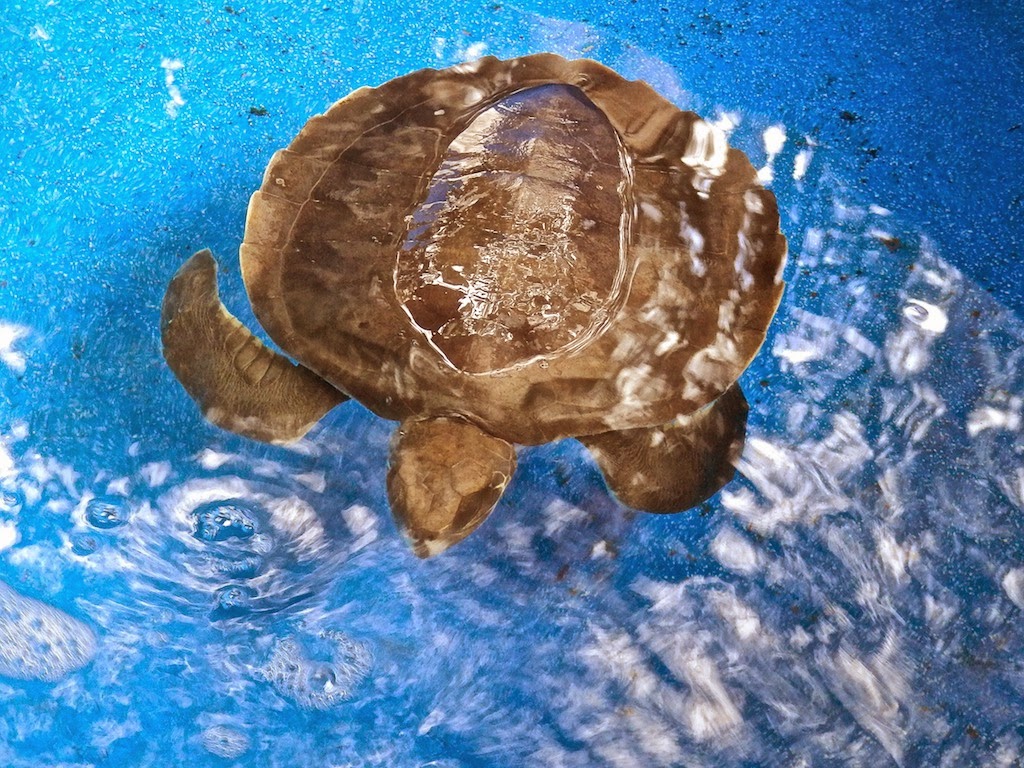 Flatback turtle, Slaty is doing well. He loves to play in the turbulence under the recycling sprinklers.  Although, he is still being force fed he does appear much stronger and brighter. 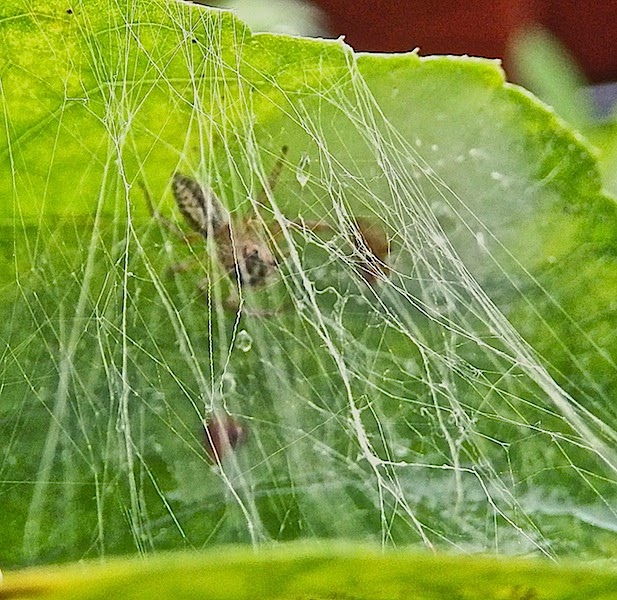 Jumping spider is now almost hidden in her retreat as she has added more web to her structure. By the looks of the raindrops on the web it seems to be repelling the water and keeping her completely dry. It would be interesting to examine the dynamics of her waterproofing system.

After two weeks of warm sunny days and cloudless skies, the rain came in this morning, but how can we complain?  Western Queensland, northern New South Wales and areas around the Queensland - South Australian border and the Northern Territory are still in serious drought.

The Bureau of Meteorology now say there is an 80% chance that we are heading into a severe El Nino event later this year.  If that occurs many farms and the mining operations in western Queensland which use copious amounts of water, will shut down.

California which is experiencing its third year of severe drought could have that drought broken by such an El Nino event, however, with the amount of heat being stored in the equatorial oceans there is a strong chance that their drought will turn to flood on a scale similar to what we experienced here in Queensland following our last drought.

Climate scientists believe that these unprecedented, widespread extreme events are a result of human-caused climate change. The individual can take personal action, if enough people did, it would make a difference. Go to:  www.davidsuzuki.org/…can-do/top-10-ways-you-can-stop-climate-change/

Meanwhile, there are fears the Abbott Government will stop funding the bore capping programme throughout central Australia. Over the last fifteen years the programme has saved over 200,000 mega litres of water. We need to tell the Abbott Government that The Great Artesian Basin Sustainability Initiative must continue. http://www.abc.net.au/news/2014-05-07/gabsi-funding/5436628

We also need to remind The Federal and State Government that it was due to lack of regulation that allowed landowners to sink bores into the Great Artesian Basin without bothering to cap them. Environmental Regulation is not just 'Green Tape' put there to annoy people, it is there to prevent environmental disasters. In 2014 the environment cannot survive if there is no restriction on development.

We need to tell our politicians, on all sides, that we care for what we have left on 'Lifeboat Earth'.      Join me, and tell a politician today, you care for the environment.