Today we welcomed in the first day of summer under a refreshing tropical shower. This washed the dust from the leaves in the rainforest and when only yesterday the leaves were all droopy today they are stretching their shining clean surfaces to the sun. What a difference a shower of rain makes after a month of dry weather.

In the rainforest the thick early morning air is humming with a chorus of coos from the pied imperial pigeons. They stir from sleep as the sun's first rays reach them and the cooing, fluttering and whooshing of their wings rises to a crescendo as the pigeons greet the new day. 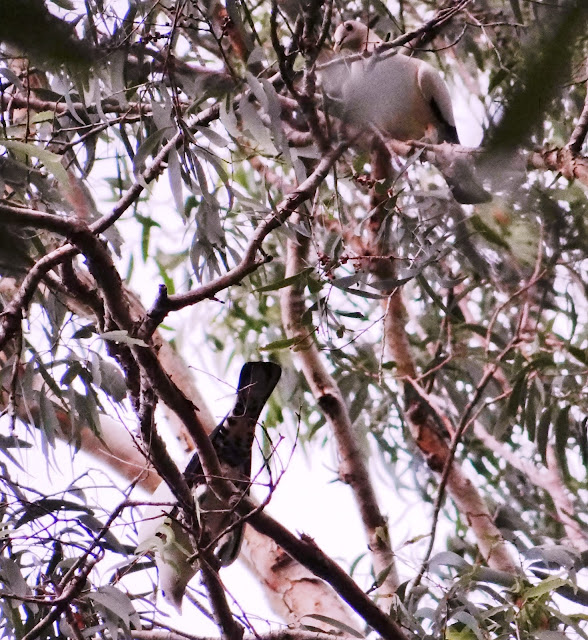 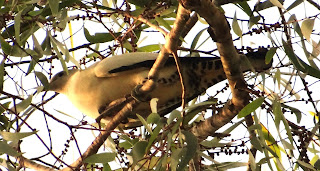 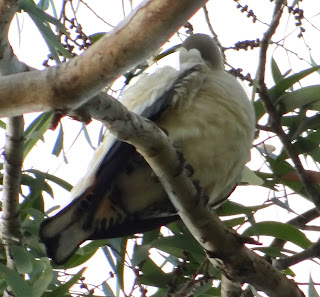 Suddenly it's time to preen and in the nesting area the canopy of the trees starts to vibrate with movement and sound as the pied imperial pigeons preform their morning ablutions. Ahhh...  a good scratch behind the ear.
Clean under the left wing then under the right. 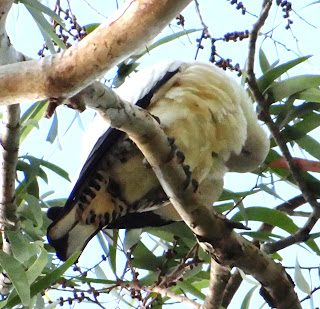 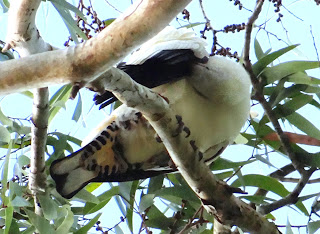 Not a feather is left untended.
Another chorus of coos signal they are 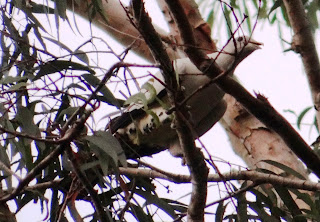 ready to leave for a day of feasting on the fruits of the Moresby Range National Park.
A swarm of Christmas beetles have emerged and they are feasting on the lush new growth of the
rainforest canopy. 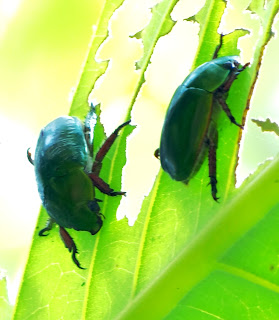 When the Christmas beetle  finish feasting they hide deep down in the foliage of the trees and sometimes congregrate in large numbers such they can completely cover the  trunks and branches of their host trees.
I found this Christmas beetle sleeping in 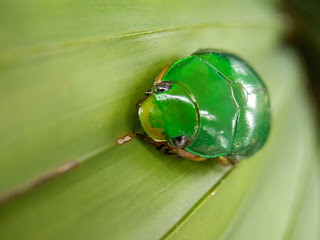 the heart of a Licuala palm.
Disturbed the beetle quickly crawled to the top. 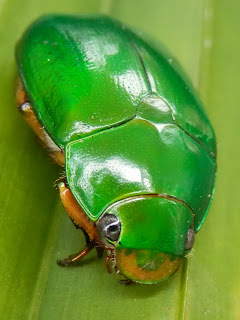 As the beetle approached the edge of the palm frond it started to wave small, clubbed antennae.
The Christmas beetle raised up on strong

prickly legs and stepped over the edge of the leaf and tumbled to the ground. 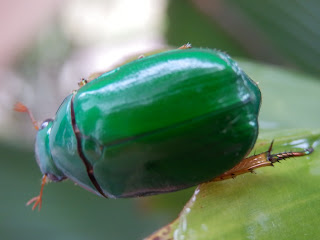 As the beetle tumbled to the ground
the clubbed antenna splayed into three and when the beetle landed it quickly buried itself into the leaf -litter. I thought how strange! I found more Christmas beetles hidden in the palms and when I disturbed them they all raced to the top of the frond and tumbled to the ground.
Christmas beetle larvae pupate in the ground and feed on the roots of grasses and trees.
I asked Dr Bill Farmsworth a local entomologist about this strange behaviour and he advised
that tumbling was a common defence mechanism of many insects.
However, the beetles have little defence against the sticky web of a garden orb-weaver spider. 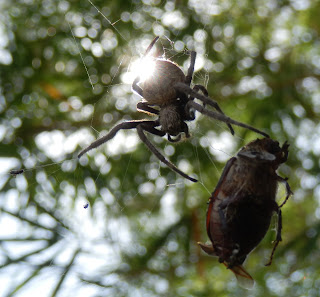 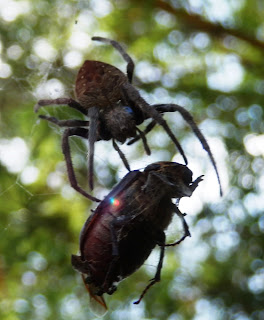 in a sticky gossamer shroud. 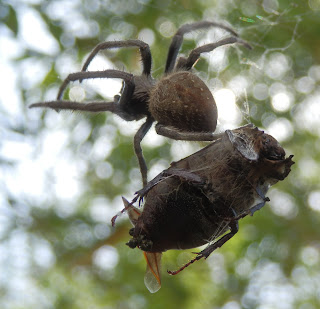 The beetle was completely immobile firmly
held in spider-silk.
Only then did garden orb-weaver mount 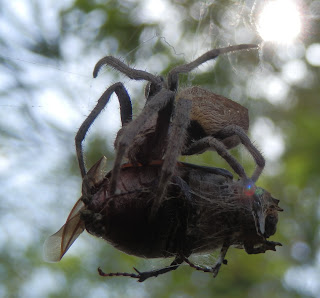 the beetle ready for the kill. 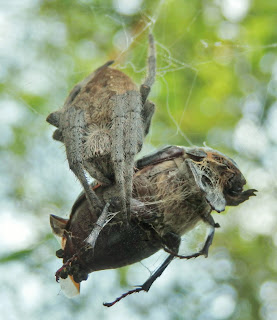 Garden orb-weaver's fangs descended into the   beetle to complete the kill.
Garden orb-weaver spiders spin their web at night and remove them at the first light of morning.
In the hot summer weather spiders are very active in the rainforest and particularly my favourite
the salticidae or jumping spider. Following are the jumping spiders I saw this week. 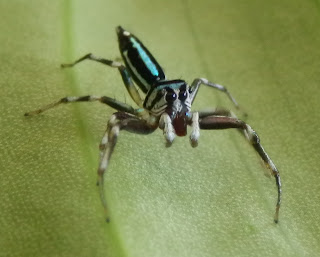 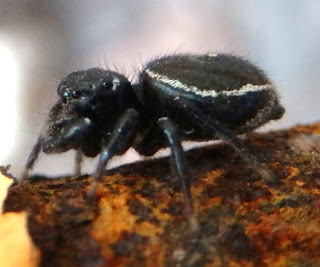 Sensing hairs can be seen on the head and abdomen of this salticidae. 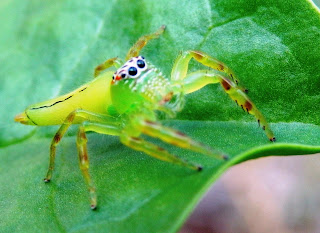 There are over three hundred species of salticidae in Australia. 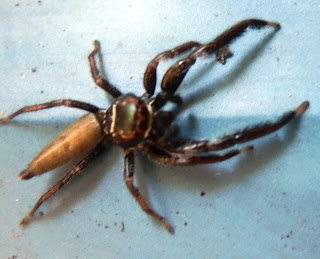 This salicidae is very large about 3 cm. 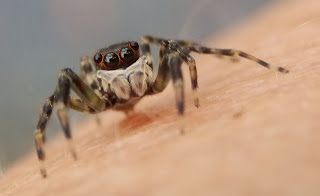 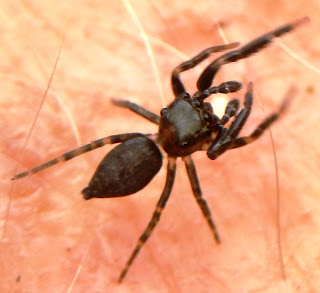 The cassowaries are feeding on a glut of wax jambu.

Jessie tolerates Snout for a few minutes, it is time to keep clear as she now chases him away with angry hoots.
If Biggles sees Jessie he runs and hides in the mangroves.
I think Biggles thought I could not see him 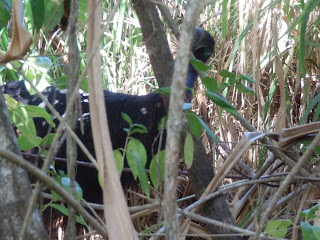 as he hid his face behind the thin trunk of a mangrove and occasionally glanced out at me.  Cassowaries are weird and marvellous ancient birds.
I had the pleasure of helping St Rita's school teacher, April Johnson this week. April is creating a project for the children of her class to learn the craft of painting collage of rainforest scenes with bark and seeds of rainforest trees. I walked into the forest with April collecting bark from for her project. We collected bark from melaleuca, red beech, kauri pine and wattle trees. 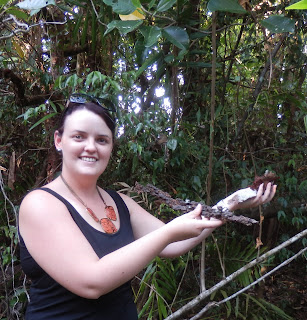 I hope April posts some photos of her students work.
Cheers for now,
Yvonne C.
Posted by Unknown at 02:59