Hello from Coquette Point, the land of David and Goliath, 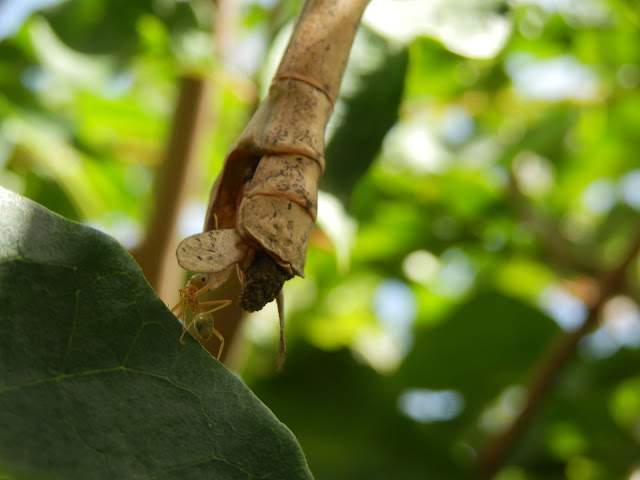 This week I saw a stick insect behaving strangely in a bougainvillea bush. The creature was agitated and extending its wings and flapping as it climbed up and through the plant. I looked carefully to see what was wrong.

The green ant pulled and pulled its little legs firmly stuck to the bougainvillea leaf. In its jaws it held the abdomen flaps of the stick insect tightly. Distressed the stick insect started to excrete a lump of wet faeces. This was most unusual as the faeces of a stick insect is normally small, compact faecal pellets and not this semi-solidified waste it was excreting.

The green ant manoeuvred and without releasing its grip, pulled and pulled, other green ants were approaching. What to do? Here before my eyes was a David and Goliath fight of almost unbelievable proportions. Whatever made the green-ant think it could possible win in a battle with such a giant opponent? 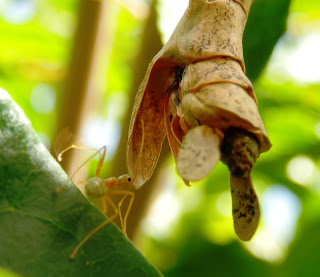 I heard the stick insect cry out in alarm and II intervened and removed the green ant with the greatest of difficulty. It would not let go and I literally had to pull the green ant apart to release the stick insect from its grasp. Saved from the army of approaching green ants the stick insect moved out of the bougainvillea to safety. I'll leave you to create a proverb for this battle.
The flowers of the Leichhardt tree Nauclea orientalia bloom for only a few short days however, they are one of the most beautiful flowers of the rainforest. Their brief appearance generally signals the start of the storm season, something for which we are all waiting as no meaningful rain has fallen for over a month. 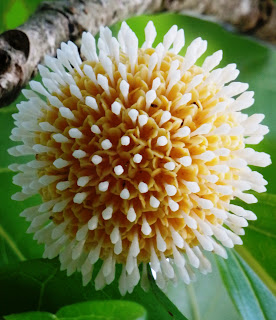 Nature's Christmas bauble.
Within a month the brown fruits will form. The 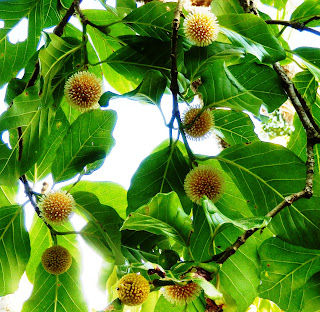 The fruits are loved by local peoples all around the Pacific and also eaten by the aboriginal people of coastal Australia. I have tried the fruit and it is a little bitter for my taste however, when the fruits start to fall cassowaries will camp under the trees and eat the fruits with relish. 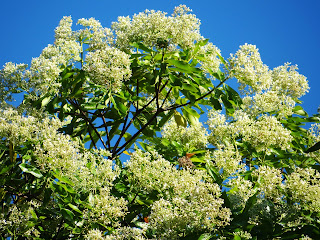 One of the tallest trees of the rainforest
is flowering this month, Alstonia scholaris, the milky pine stretches high above the canopy to attract
insects to pollinate its pretty white flowers.
The bright orange capsules of the pink tamarind Toechima erythrocarpum are ripe and the pied imperial pigeons and lorikeets feast on them as they spill their tasty black seeds. 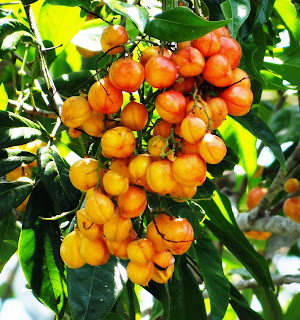 Looking like snow on the branches the small
white flowers of the sarsaparilla tree Alphitonia petriei glisten along the edge of the rainforest. This tree is the host plant of the green banded blue butterfly. It is a pioneer species and will grow quickly to fill a hole in the rainforest canopy. 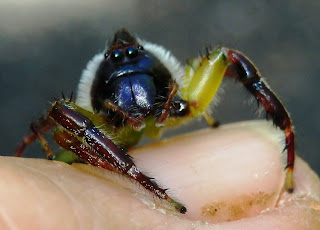 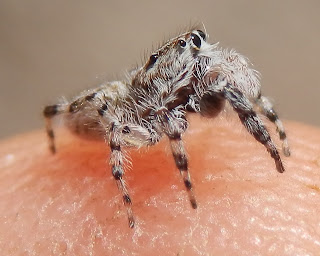 This hairy fella is one of the smallest of jumping spider being only one millimetre in length. 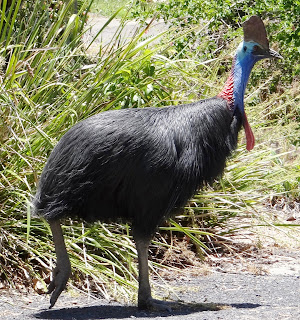 While jumping spiders have established their
niche in the rainforest and are busy building nests, 'Jessie' the matriarch cassowary is very
firmly telling any approaching male she wants nothing to do with them. I see her every day or so
sauntering through the rainforest paths proudly stretching to full height challenging anyone not to approach her. I distinctly get the message she is not in a good mood.
Meanwhile 'Snout' keeps a lookout and just a glimpse of her will send him running in fear. 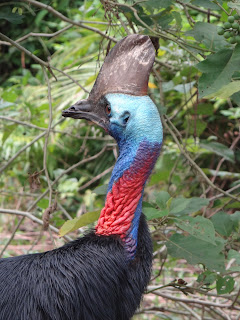 Female cassowaries treat their men mean.
Yesterday we experienced the largest King tide of the year, 3.29 metres at 10am.

The tide covered the road to the nursery gate. With gum boots on I ventured into 27V and saw the area where the RV park development proposal is planned was well underwater.  What a surprise! 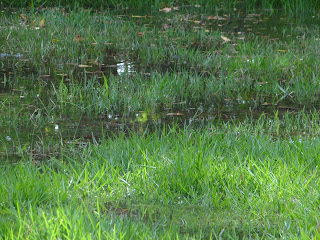 This supports the levels we have been given for the property.
While I am always quick to throw brickbats it is time to give a bouquet to CCRC. For some time there has seen to be a problem in Canecutter Court in Innisfail's CBD; the metallic starlings and other birds have been roosting in the trees, (it is what birds do), and someone complained when they were pooped on as they sat under a tree. In their wisdom CCRC have tried scaring the birds then netting the trees now they have come to a compromise and have erected a cover over the seats.
When I photographed local resident Darren relaxing in the shade of the trees, he remarked,"They should leave the birds alone, let them enjoy the trees." Hopefully now the birds will be able to do so. 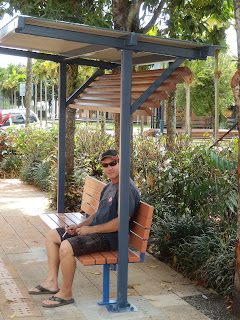 Martin returned to Port Innisfail on Wednesday and will be staying until the New Year. 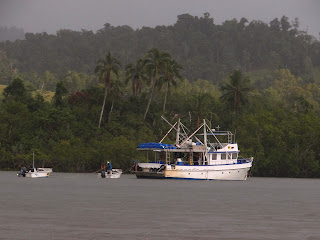 Our thought are with the people of Fiji and Tokelau Islands tonight as cyclone Evan a cat 4 system expected to strengthen to cat 5 and travel over the Yasawa and Mamnuca groups, brush the other Fijian islands then head for Tokelau. Many Fijians and Tokelau Islanders live and work in Innisfail.

I am sure I speak for everyone our thought, tonight, are with the people of the Pacific.
Yvonne.