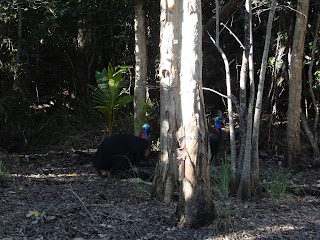 Cassowary Jessie and Snout are into their second week of courtship and are daily moving around in a one square kilometre range of rainforest, melaleuca and mangrove swamps.
Jan Shang reported she saw the two cassowaries eating fallen Quandong fruits close to her house when for some unknown reason matriarch Jessie got cranky and chased the male Snout. Whatever the disagreement between the two, later that day they were seen walking together again.

On Wednesday afternoon I saw them enter the Melaleuca swamp walking quickly through the trees. 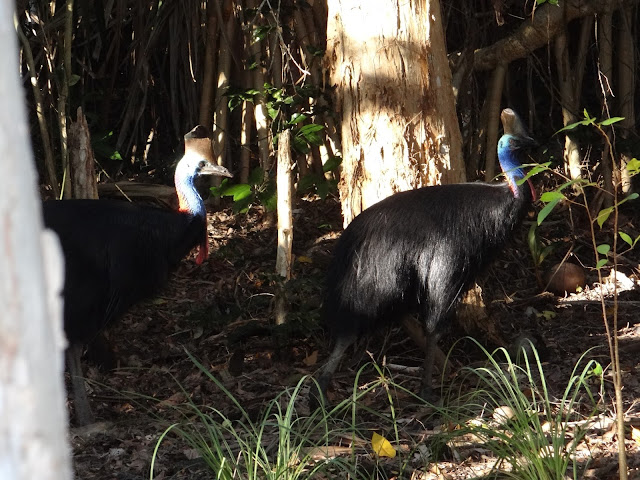 Jessie followed Snout as he walked briskly through the swamp. 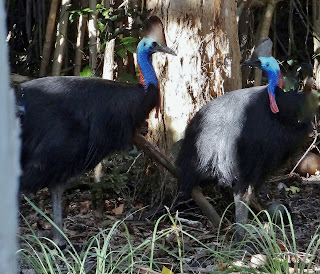 Suddenly Snout stopped and looked back at Jessie. I heard no sound from the cassowaries and I believe they were not aware of my presence. 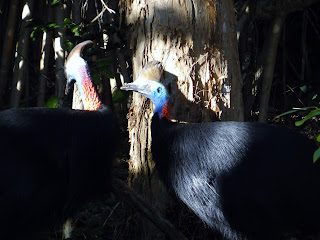 Snout approached Jessie and she bent her head in submission. 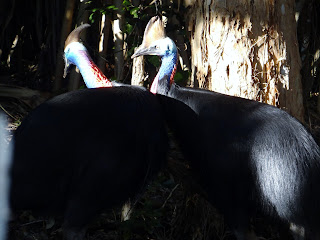 He reached towards her and the sun's rays played shadow puppets on the melaleuca bark as their casques and necks entwined and they started 'necking'. 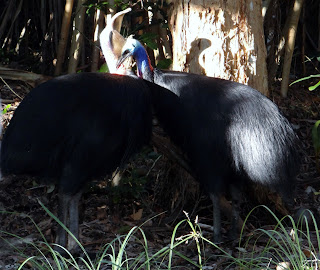 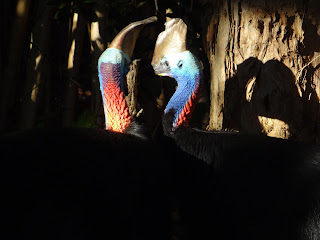 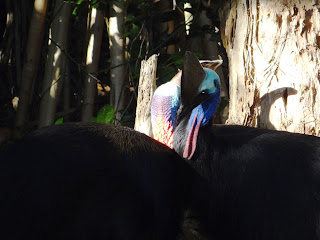 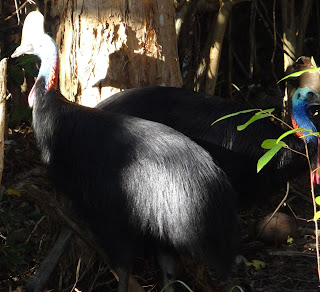 Then as quickly as it began Snout turned and walked away, Jessie followed obediently 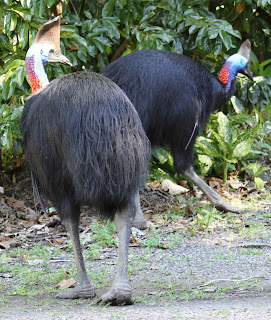 They were still walking together today, Jessie watching Snout's every move as she followed him. 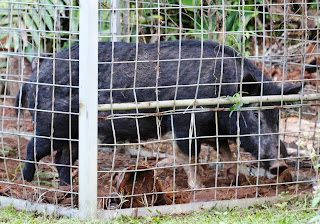 Feral pigs cause a great deal of damage in the rainforest and on farms of the Wet Tropics region. For some time now I have had good success in controlling pig numbers on my property with a cage designed not to catch cassowaries. The cage has a long vertical push -door opening. However, one particular pig has eluded me for almost three months. This week with great patience and stealth I caught him. Once he was comfortable coming into the cage I slowly reduced the opening of the door over the week until I finally closed the cage, by that time he was used to pushing the door open to enter and escape. Until I fully closed the door on Monday night and he was caught. 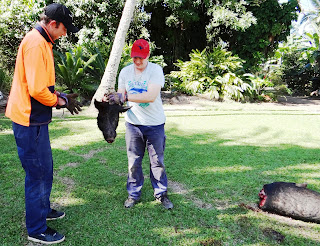 By coincidence I was  speaking to a senior National Park Ranger last week about pigs and the problems of disposing of their carcass once they were caught, the ranger told me QNPWS would be interested in taking the carcass to use in crocodile traps. Apparently the new Crocodile Management Plan means the rangers must remove all crocodiles over two metres from within the urban footprint. That means a lot of bait is needed for crocodile traps and feral pig carcasses are regarded as good crocodile bait. So I rang Innisfail QNPWS on Tuesday morning and sure enough two rangers came out and chopped up the pig. 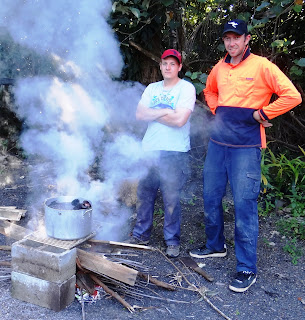 My wonderfully talented friend Liz www.lizgalliejewellery.com  asked me to save the pig's tusks for jewellery and so we kept the head. Then to give my French visitors, Nicolas and Quentin, some real OZ bush experience I had them collect wood and build a fire and we cooked the pig's head all day and all night, by that time the tusks just fell out. The pig soup was not served although we made the boys believe it was all part of the experience. You can see by the look on Nicolas he was not looking forward to this 'Aussie cordon bleu delicacy'. 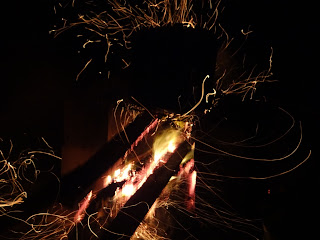 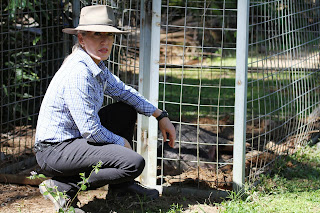 By another coincidence Thea Pobjoy, DAFF Queensland's Farm Management Systems Officer, turned up for a visit. Thea was interested in our pig and the damage and disease pigs cause to horticulture which we discussed at length over a cup of tea. 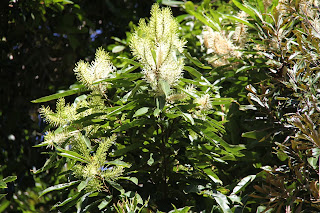 The rainforest canopy is covered in blossom as the 'Irish lace' like flowers of Darlingia darlingiana, the brown silky oak open in the winter sunshine. 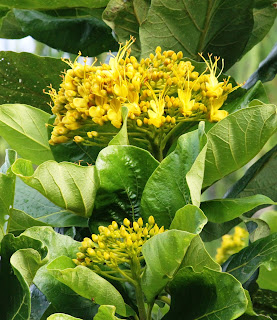 While the saucer size blossoms of Deplanchea tetraphylla, the golden bouquet tree open bright yellow above the large leaves of this beautiful rainforest tree. Tiny insects hum a symphony of thanks as they enjoy the nectar flowing from the flowers in the warm winter sun and birds dart busily amongst the flowers enjoying both  nectar and insects. The rainforest canopy is a kaleidoscope of sound and colour. 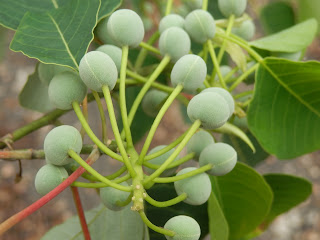 The abundant fruits of Homalanthus novoguineensis, the bleeding heart tree, are turning purple as they ripen and fall, much to the delight of the rainforest pigeons. 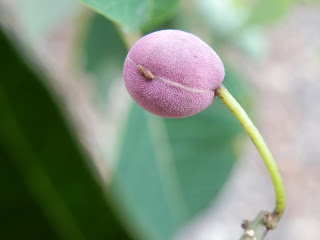 A giant of the rainforest Endiandra Montana, the brown walnut is dropping its fruits to the forest floor. Like mysterious yellow eggs they lie at the base of the forest giants. 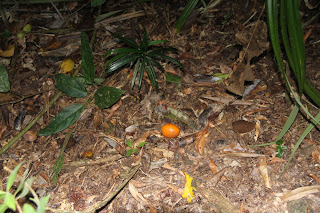 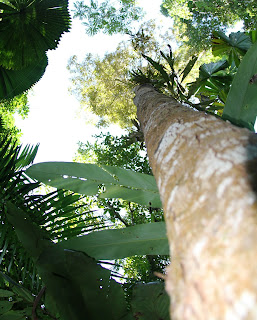 All over the forest floor cassowary scats are full of the walnut's seed. 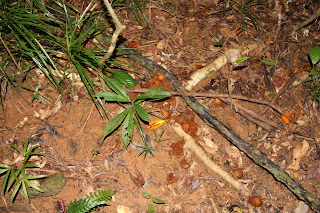 I did two transits through the rainforest each of 100 metres. In one area I counted ten cassowary scats and in the other five.
Whilst in the rainforest I was surprised to hear loud voices coming from the next ridge and just happened to walk out of the forest at the same time as four men. The men were from DAFF and were looking for weeds in National Parks, their particular concern was Miconia calvescens. It is worth understanding that in Hawaii M calvescens has invaded 65% of the rainforest and is considered one of the greatest threats to Hawaii's rainforest. It is reassuring that the Newman Government is on top of this potentially devastating weed. A great big bouquet for DAAF and Nr Newman please keep funding this department directly to carry out weed control management. 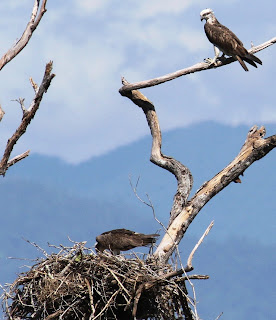 I was mistaken the other week about the hatching of osprey chicks. What I saw moving in the nest was a lining of fresh green leaves blowing about in the wind. The birds have been busy again this week and are continuing to bring new leaves to line the nest. Below the female instructs the male on how to place the leaves in the nest. 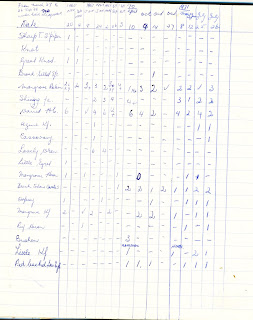 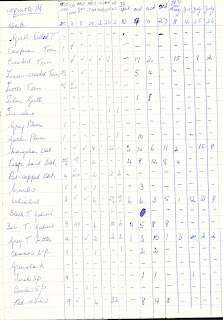 A very big thank you to  'Friend of Coquette Point', Billy Gill.  Billy is now living in Canberra but in 1970 she published a paper on the 'Birds of Innisfail and Hinterland'. The paper details Billie's observations from 1954 to 1968 in a roughly triangular area of north Queensland, from Bramston Beach to South Mission Beach to Ravenshoe. This week Billy found some old field notes of her observations at Coquette Point and kindly forwarded them on to me.                                             When I see the same number of birds in relatively the same time- line it is very reassuring. On the other hand it is of great concern when birds which were once regularly seen are no longer found here. Billie's observations are an important benchmark for our area. Thank you Billy and we hope you have a warm fire to cheer you through winter and I know you enjoy looking at this blog and remembering when you walked Coquette Point's rainforest and beach.
I am off to Townsville in the morning so the blog is a day early.
cheers and best wishes,
Yvonne C.
Posted by Unknown at 03:48