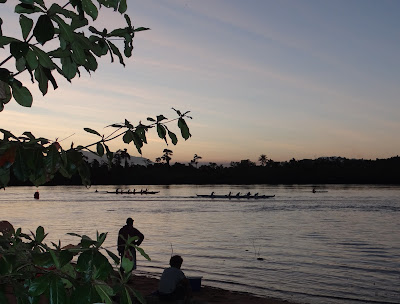 Another week of perfect weather; warm days, mild nights and slight winds with a few drops of rain at night to keep the trees green.

The Johnstone river has been busy with lots of boaties, fishermen and of course the champion outriggers. Splendid sunsets and a full moon- rising what wonderful gifts Mother Nature offers.

With such natural wonders all around us who would think that on Wednesday we exceeded the natural  resources that Earth can renew in a year. August 20 was 'Earth Overshoot Day'. www.earthday.org

The Australian elections are underway and unfortunately most of Australia's politicians are only concerned about the economy and the Government's financial  deficit. Only the Greens are expressing concern about the ecological deficit of our nation. The environment is not an issue in the 2013 election and yet is the greatest issue facing all of our futures. While newspapers this week were silent on the cries of our poor planet the cries of a baby named George were examined endlessly. Is this a measure of us?

Today, much to my absolute delight  I found another species of jumping spider at Coquette Point. 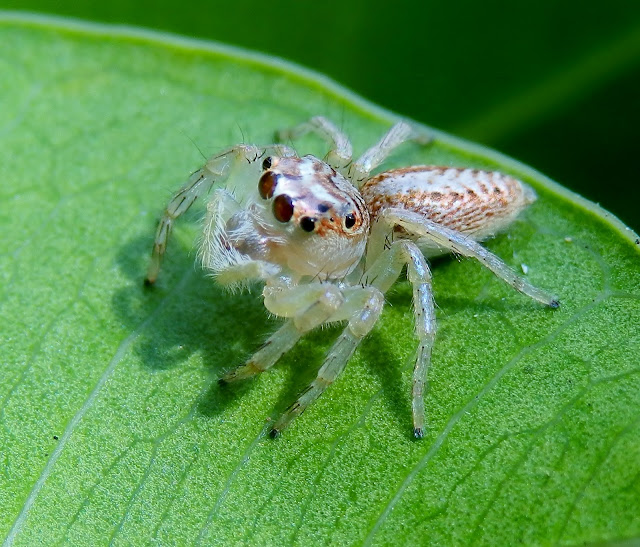 5000 species of jumping spider live in tropical regions but only 252 have been described in Australia, so far and including this one, Cytaea severa.   Most jumping spiders hibernate in winter and emerge from their retreat when the weather warms. 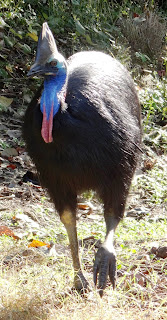 On Wednesday I briefly saw cassowary 'Snout' striding briskly towards the mangroves. I have not seen him again and there has been no sign of the matriarch 'Jessie' this week but it seems clear that either the courtship failed or if 'Snout' was sitting on eggs something has happened. Either way it is unlikely there will be any chicks from this male this year.

Two of the other males, 'Little Dad' and 'Brown Cone' are still parenting one chick each from last year and the only other senior male, 'Dad 1' hasn't been seen since Christmas Eve when his chick was run over on the Coquette Point road.

While there are other younger eligible males they have not been seen for some time. This could be good news however, with the number of  men with dogs entering the World Heritage area and the Moresby Range National Park I hold great concern for the safety of these birds. A cassowary sitting on eggs is particularly vulnerable. 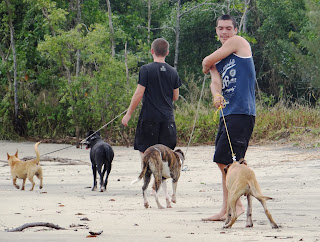 I saw the men on the right take four dogs into the Moresby Range National Park, they released the dogs apparently chasing pigs, the dogs ran off and the men spent hours calling out and looking for the dogs. 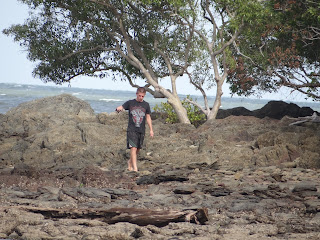 For hours they called but the dogs did not return.

Wild dogs loose in a National Parks is devastating for wildlife. Dogs soon become feral and undermine the very intention of National Parks which is to provide a safe home for native animals.

There is no place for dogs in National Parks or World Heritage areas but it seems the authorities seem to think that this is a politically sensitive issue and are loath to erect 'No Dog' signs. 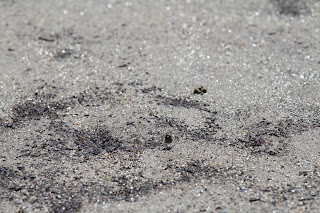 This week Russell and I went for a walk on the last extreme-low-tide of the year .19m on Tuesday.
We were delighted to see the solider crabs had just emerged. Hundreds of tiny crabs marched in waves across the beach in front of us, we had to be so carful not to walk on them.
These tiny crabs had not developed their signature blue colour but they will grow quickly feeding on the rich detritus washed from the rainforest and deposited on the sand.

The cassowaries know when the crabs are mature and they can often be found hunting on the tidal flats. Another important reason not to allow dogs on beaches which are cassowary habitat areas. The cassowaries and rich mud and sand flats are one of the reasons the coquette Point Intertidal and mangrove area was included in the World Heritage Wet Tropics. 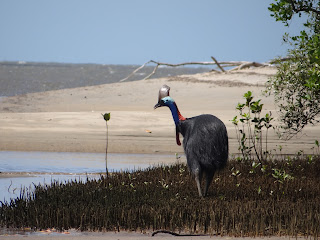 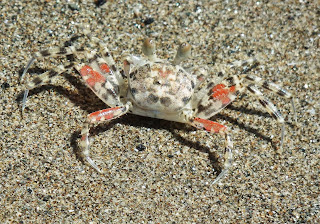 As Russell and I walked out on the sandbar we found this brightly coloured stalk-eyed crab. 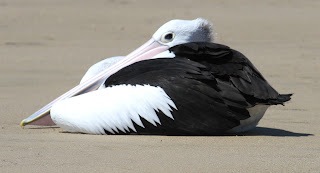 In the distance we saw something black and white on the outer sandbar. We thought it was a large piece of rubbish. As we walked closer we realised it was a pelican. We walked closer and the pelican didn't move. In dread I thought the pelican was dead. Not until we were within a few metres did Cherino the Pelican move. 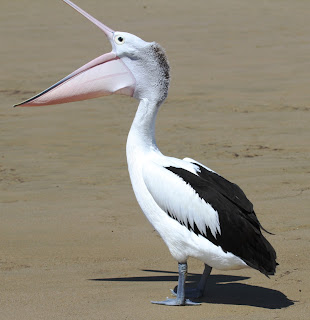 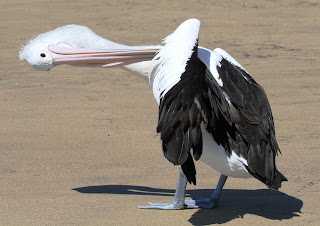 A meticulous preen. Then he was ready to pose for the camera. 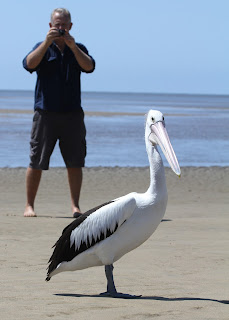 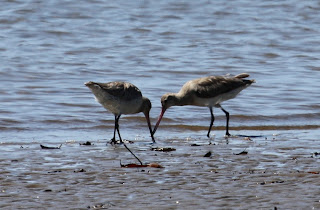 The two Bar-tailed godwits that had wintered over at Coquette Point were feeding in the shallows.

We were delighted to see the first of the migratory shorebirds had arrived and we saw a flock of Pacific golden plovers feeding in shallow pools with the two resident beach stone curlews.

The Pacific Golden Plover flies great distances in its migratory journey to Artic regions each year. 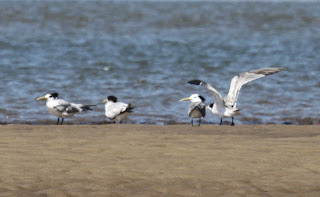 Further out on the sandbar around 50 crested terns were resting. As we watched some birds took to the air and flew out to sea and other terns returned. 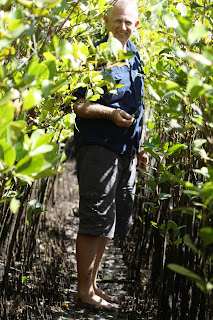 We walked home through the mangroves and Russell ended up with a mangrove mud boots. 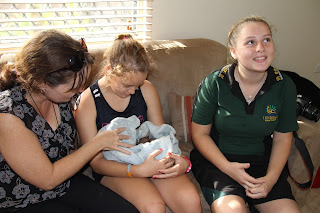 A large female Agile wallaby was killed on the Coquette Point Road early on Friday afternoon. Fortunately the Redman family stopped to look and found a baby in the mother's pouch. They took the wallaby to the vet and I understand it will be cared for by wildlife carers. 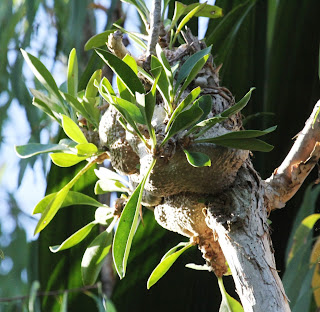 High in paperbark and mangrove trees in the swamps at Coquette Point a special epithetic plant lives, this is the ant-plant, Myrmecodia antoinii. The ant-plant has a symbiotic relationship with a special ant phedale myrmecodiae which lives within the chambered tuber of the plant.

Symbiotic relationships between plants, insects, birds and other animals are common in the Wet Tropical rainforest.

I have often watched cassowaries follow metallic starlings and nutmeg pigeons to food trees where the cassowaries feast on the fruit accidentally knocked to the ground by the birds. 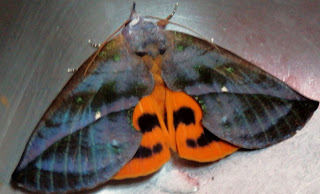 Do you remember this beautiful creature I admired last week? Well I was examining the fruits of onion wood and walnut trees and noticed that most of the fallen fruit had been stung perhaps by this fruit piercing moth ;Eudocima iridescens or one of its close friends.  It is normal that fruits stung by these  insects fall prematurely. Do we know how beneficial this is for ground feeding animals like cassowaries?  While we are quick to destroy this moth because it harms our exotic fruits, we give little thought on how we can apply a deterrent spray to fruit and leave the moth to fulfil its natural role in the rainforest. 'In the measure of things there is a place for all creatures'. I find that 2mls of tea-tree oil in one litre of water protects fruit from E. iridescens.

June Norman phoned me this week, she completed her Reef Walk to Gladstone on the 15th August and the walkers congregated at the Gladstone Marina to celebrate the 1200km long walk. The sharing of the experiences was brought to a sudden halt when armed police arrived and questioned and took details from June and the group. What a waste of time when all they needed to do was read the website. Anyway, June expressed sincere thanks to all in the Cassowary Coast area who assisted her. June said the planting of the tree in ANZAC park Innisfail with Aboriginal Mandaburra elder Henry Epong was a highlight of the walk. www.reefwalk2013.com 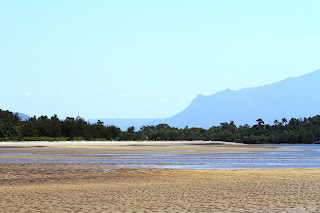 I hope the sky is blue at your place.

Cheers from the beach at Coquette Point.