Good rainfall this week, with 80 mm falling in 12 hours last night at Coquette Point, and much higher rainfall totals recorded in the hinterland of Innisfail. Once again the valuable topsoil washed off the farms and into the Johnstone River and out into the Coral Sea. The farm runoff of suspended sediments containing insecticides, fungicides, herbicides and fertilisers will inevitably flow onto and into the corals of the Great Barrier Reef. In spite of all the rhetoric and all the money squandered on trying to solve this problem, nothing has really changed. 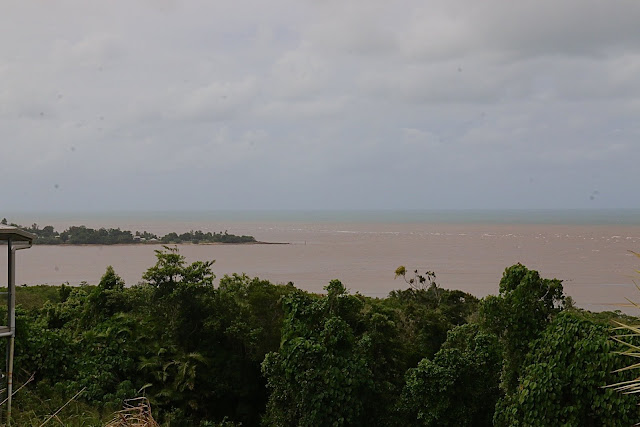 The golden penda trees, Xanthostemon chrysanthus are flowering all over the Wet Tropics attracting north Queensland day moths to feed on the nectar. 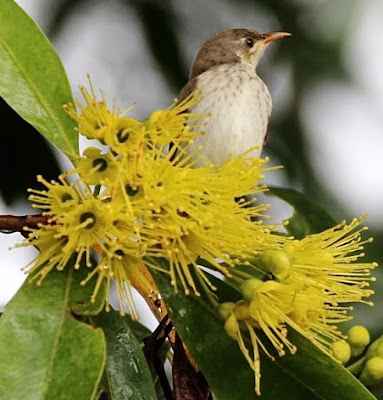 The brown-backed honey eater was also drawn to the Penda's flowers. About a dozen happy and chirpy little birds competed with the moths for the nectar.
Strong winds always make the cassowaries nervous and I saw Snout and Kin running for the shelter of the rainforest when a rain squall lashed the coastline today. 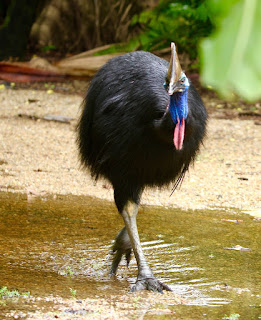 Early this morning I found matriarch cassowary Jessie standing beside a tree, waiting for the sun to come up and the rain to stop. She stood quietly without moving for some time. It was only the second time I had seen her this week.
The announcement on Thursday by naturalist Mikey Kudo that he has discovered two species of mangroves, never before identified as growing in Trinity Inlet, Cairns, was very exciting news for FNQ botanists.

Mikey was in Chinaman Creek looking for another mangrove species when he noticed a tree with very different flowers. He then saw another tree that was also different in appearance to the rest of the mangrove species around the area. Mikey photographed the mangrove trees and showed them to botanist Wendy Cooper and Dr Norman Duke, international mangrove scientist with TropWATER Centre at James Cook University in Cairns. The mangroves were identified as being Bruguiera hainesii and Bruguiera cylindrical.

Bruguiera hainesii is listed as critically endangered by IUCN and is on their Red List of Threatened Species. There are only 200 individual plants growing in the wild across its habitat in tropical Asia. Mikey Kudo went on to identify 50 trees growing in Trinity Inlet, which adds 20 percent to the known global population of this species. 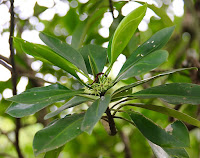 The second species of mangrove, Bruguiera cylindrical, is known to grow in a limited range from the Jardine to the Endeavour Rivers on Cape York Peninsula. Until now it had never been discovered growing south of that area. Below bird man, Del Richards, stands beside a Bruguiera cylindrical in the mangrove forest of Trinity Inlet 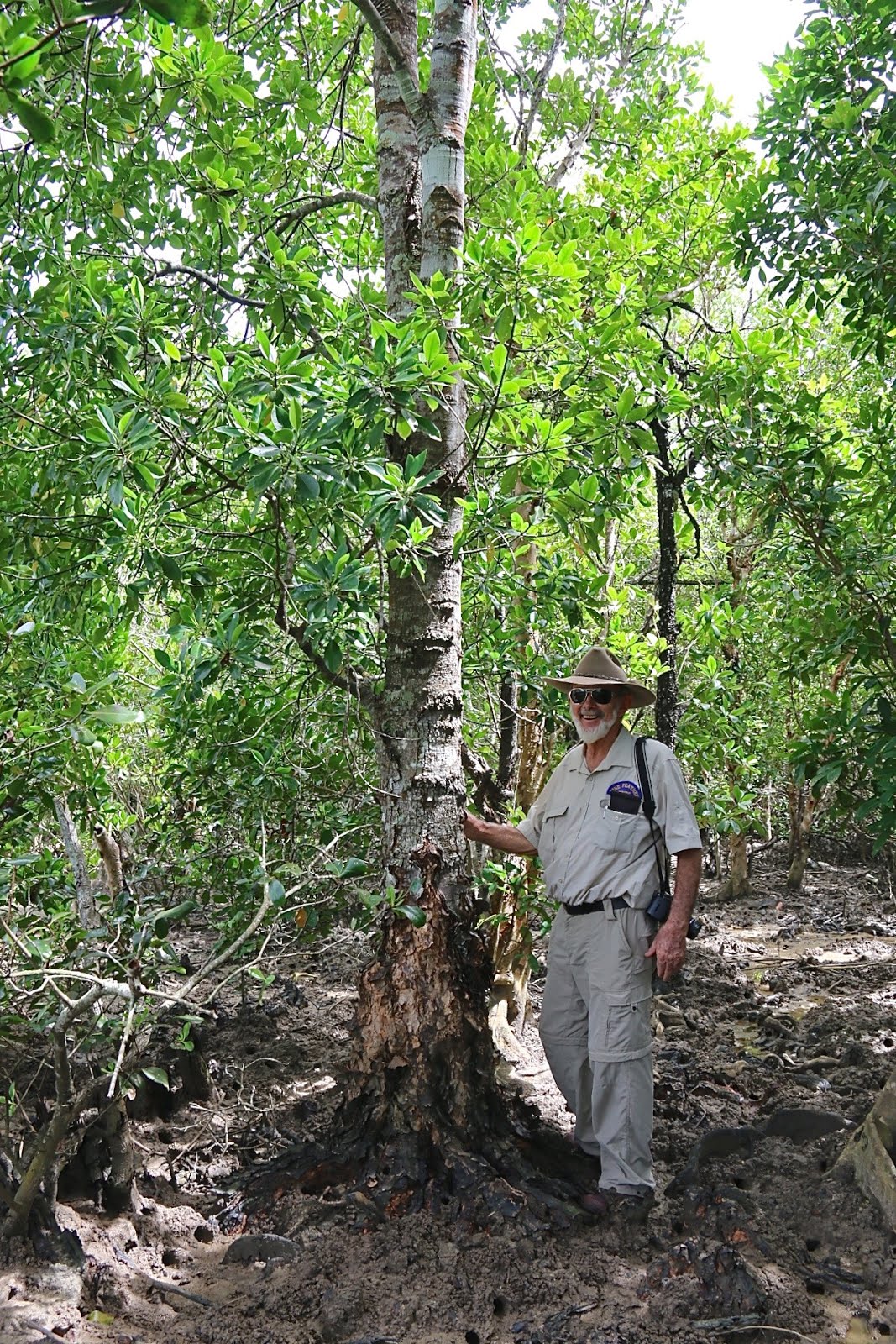 The area where these mangroves were discovered is adjacent to the new electricity transmission lines which were built 10 years ago along coastal Queensland. An EIS would have needed to be completed before the clearing of mangroves took place for the transmission lines. Why weren't these species discovered then? 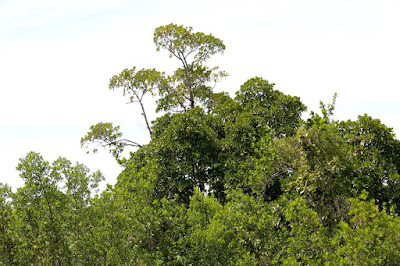 The trees of both of these mangrove species
are very old and tall, estimated to be between 100 and 200 years old, they stand out like sentinels amongst other mangrove species. 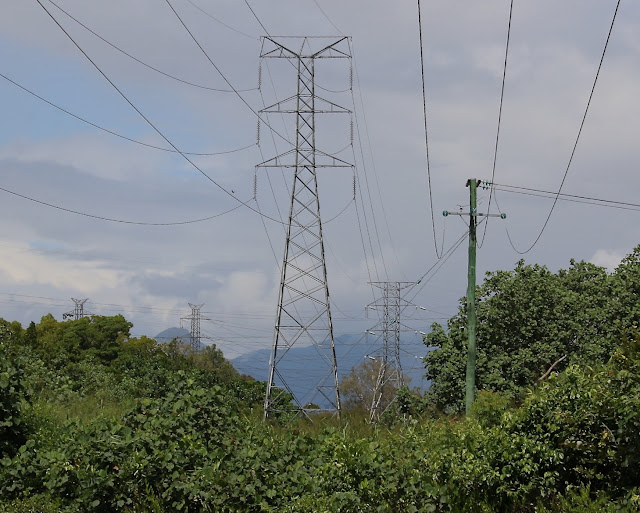 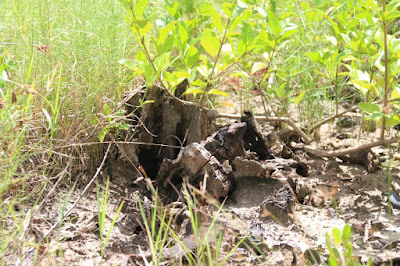 Underneath the power lines the severed trunks of large mangrove trees are slowly being covered by opportunist weeds. 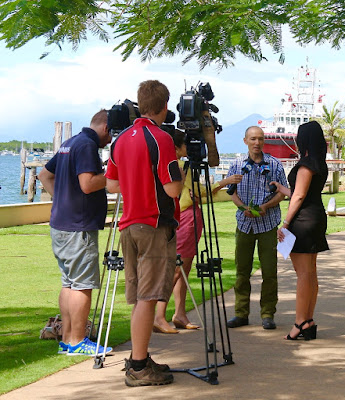 There was good response from the Cairns media about this discovery and both WIN and Channel 7 interviewed Mikey Kudo. They also ventured into the mangrove forest to film.

Yesterday Geoscientist Professor Jonathan Nott launched his 'Coastal Risk Australia' website. The website has been developed to help communicate the risks of coastal flooding associated with sea level rise and storm surge. When the website was first launched I looked up Innisfail and Cairns and took screen shots of the projected future flooding predicted by 2050. I posted these maps on my Facebook page and put a link to Coastal risk Australia's website. 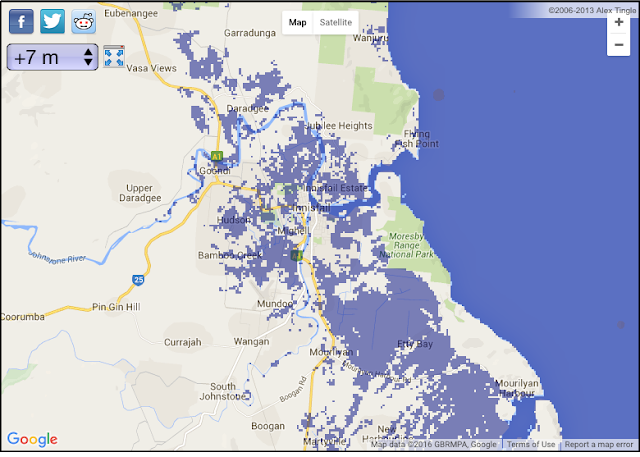 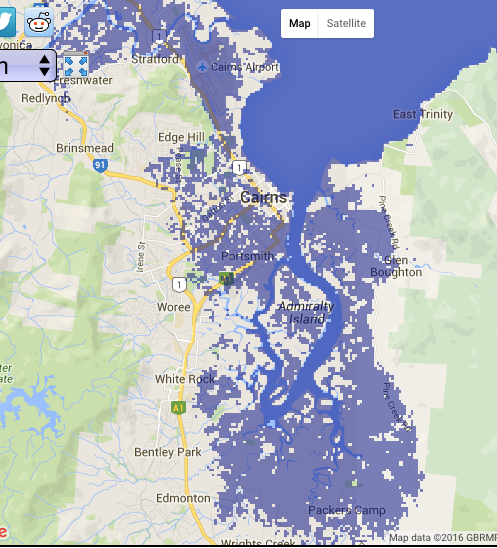 Unfortunately, seconds after I did this the website appears to have been hacked. http://coastalrisk.com.au/# Now all you receive when you log on is a message which says,  "Thank you for your interest. The website is experiencing unusually high volume. We'll let you know when we can fit you in."  Strangely that high volume continued all night last night and all day today.
It's all too easy to be paranoid.