At 5pm last Sunday afternoon I received a phone call from Judith Tanock, who lives directly across the River from me, Judith told me she had found a dead turtle on the beach. I gave her the phone number for Mandubarra Turtle Rehibilation Centre and told her to report the incident to them. Unfortunately the Epongs were away and could not attend. Nellie Epong asked if I would investigate on behalf of Mandubarra.

At 8.30 am on the 15 June I responded to the report of the dead turtle and found it pulled up above high tide in the front of the Canoe Clubhouse. I examined the turtle and found the rear right flipper was missing and there was a clean cut on the wound. I formed the opinion that the turtle had been caught in a fishing net and had drowned. I believed that subsequently the fisherman had cut the flipper from the turtle to remove it from the net. (This is not an offence as apparently this action is allowed by licensed commercial fisherman relating to species of conservation concern when they are found dead in licensed commercial fisherman's nets.)

There was no damage to, or marks on, the carapace, plastron, head or the other flippers of the turtle. No indication that the death of this turtle came from an attack by shark, crocodile or boat strike. This young green sea turtle was in prime condition with lots of fat around the head and a firm carapace. 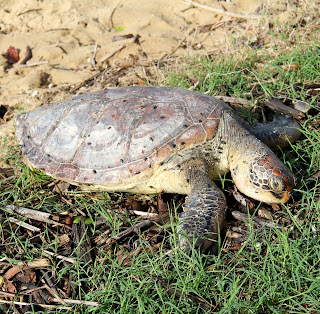 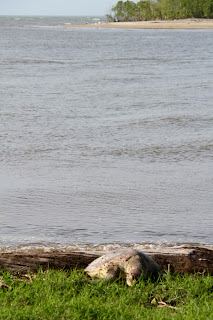 As I stood looking out across the river a turtle surfaced, 10 metres offshore. I looked at it and the turtle appeared to look at its mate on the beach. It gasped for air then dived down into the river. 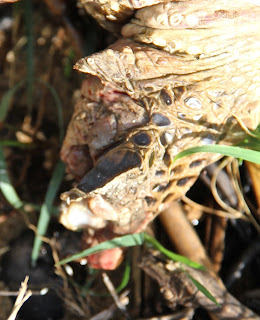 Whilst I was examining the turtle, Chris Holmes a reporter from the Innisfail Advocate arrived, Judith had phoned him. Judith and I told him that this was not the first incident of 'species of conservation concern' being found dead on the shores of the Johnstone River.  In the case of a dolphin, (see below), the findings of the National Parks Officer was that a sharp blade had been used to cut the  drowned dolphin's fin in order to release it from a fisher's net. I told the Innisfail Advocate that I believed netting in the Johnstone River should be banned. I called for a State Government buy-back of all commercial netting licensees in the Wet Tropics Rivers and Creeks and to introduce legislation to ban all netting in the waterways of the Wet Tropics.

Netting in Rivers, anywhere, is clearly not sustainable. Once turtles, dolphins and sawfish were common in the Johnstone River now they are rare. Sawfish have not been found in the River for some years. Sawfish are particularly vulnerable to netting.

If the Federal Government can appoint a commissioner to investigate complaints about wind turbines then I call on the Prime Minister to appoint a commissioner to investigate the waterways of coastal Queensland.  There is wide-spread mangrove dieback in Queensland Rivers, loss of sea-grass, loss of the larger marine fauna like turtles, dolphin, shark and saw-fish. Loss of riparian vegetation along most waterways and wide-spread agriculture run-off. What are we doing to our waterways and where will it end? Today I saw a video of a huge algal bloom out to sea off the Johnstone River, it stretched for miles. Algal blooms do not normally occur in winter, so what has caused this incident?

It was high-tide on the morning we buried the green sea turtle on the beach at The Coconuts and across at Coquette Point we saw the pelicans, terns and pied oyster catchers sitting on the beach above the high-water. Frequent squalls were coming in from the Coral Sea and the wind was blowing over 30 knots. 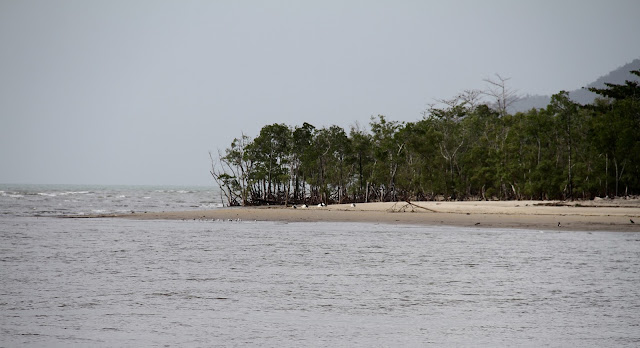 A pod of the rare Indo-Pacific humpback dolphin often swim within the estuary of the Johnstone River and Green Sea Turtles come into the inlet to nest on the sand dunes on the northern side of the River.

Cassowary Jessie is still patrolling Coquette Point, although she appears to have lost a little of her aggression. Ruth saw her this week at the top of the Range and she also saw Hero and little Ruthie feeding on the Panama Berry tree.

I normally sit on the patio to have my breakfast and keep an eye on the river to see what is moving about, lately Jessie has been poking her head around the corner to check who's there. Not much of interest to her on my breakfast plate of porridge, at this time of the year. She checks me out, looks for Ky, then walks away.

There was no sighting of cassowary Ky for nine days and I thought Jessie had chased him away from this area for good. Then late Thursday afternoon I found him in the gallery rainforest on the boundary of my next door neighbour, Lot 27V. 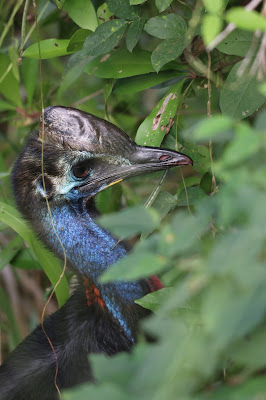 Cassowary Ky was eating the exotic Ardisia elliptica fruits which were growing in the understorey of the rainforest. Also on the ground in this area were the fruits from the blush satinash, Acmena hemilampra, and Leichhardt pine, Nuclei orientalis as well as the rosy apples of the scented daphne, Phaleria clerodendron; a cassowary smorgasbord on the ground all around Ky. 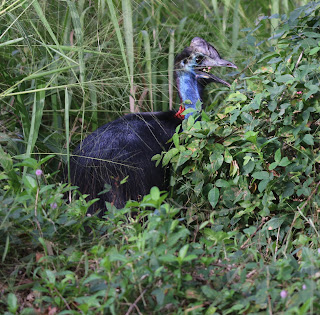 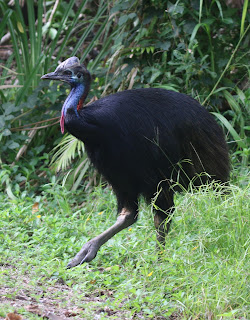 Today I found Ky asleep on the edge of the mangroves, stretched out under the cottonwoods, hibiscus tiliaceus looking fat and contented. 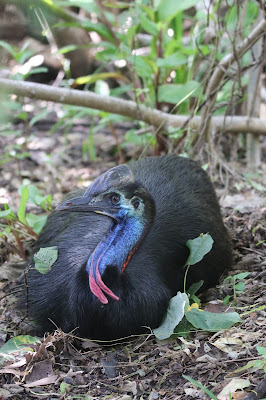 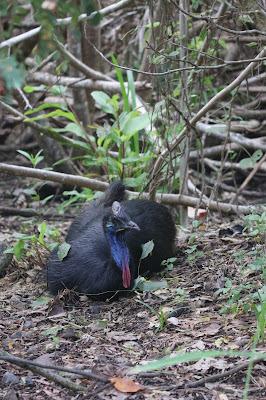 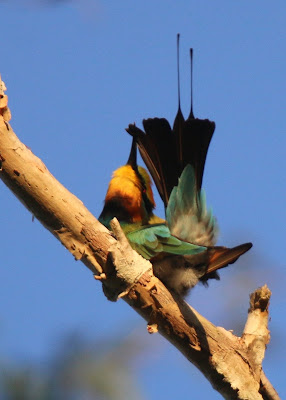 When the sun comes out after long periods of rain the birds immediately engage in preening. I watched this male rainbow bee-eater preen every feather of his body including his delicate tail feathers. The male's tail feathers are longer than the females and immature birds do not have extended tail feathers. It reminded me of watching a praying mantis preen in the same manner. Cleanliness is essential for so many wild creatures. 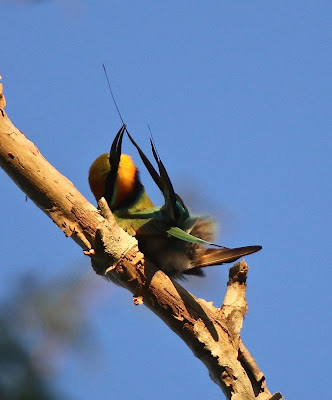 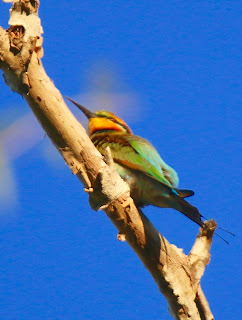 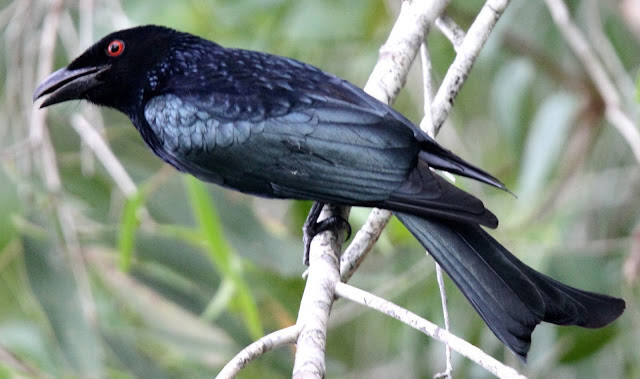 The spangled drongos have been behaving in an extraordinary manner. Turning upside down and mimicking the leaden flycatcher's tinkling call. The New Guinea population of drongos travel to north Queensland to breed in winter. While the Queensland drongos go south to New South Wales to breed. It appears in drongo-land you need to behave in a most ridiculous manner to attract a mate. 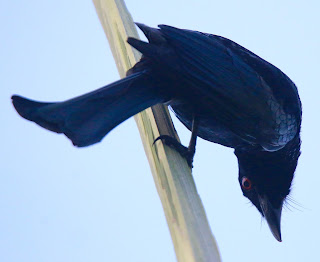 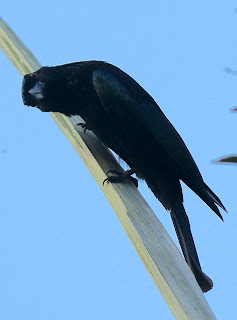 The fruits of the Solitaire palm Ptychosperma elegans are ripe and I watched the yellow oriole drop into the tree then announces his possession with a loud screech before gobbling down as many fruits as he could manage. 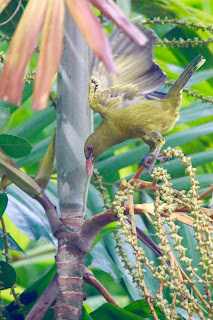 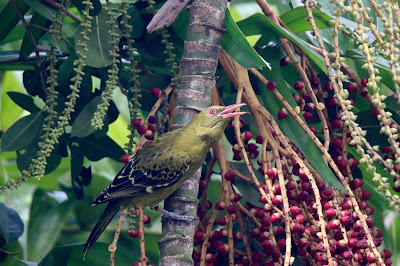 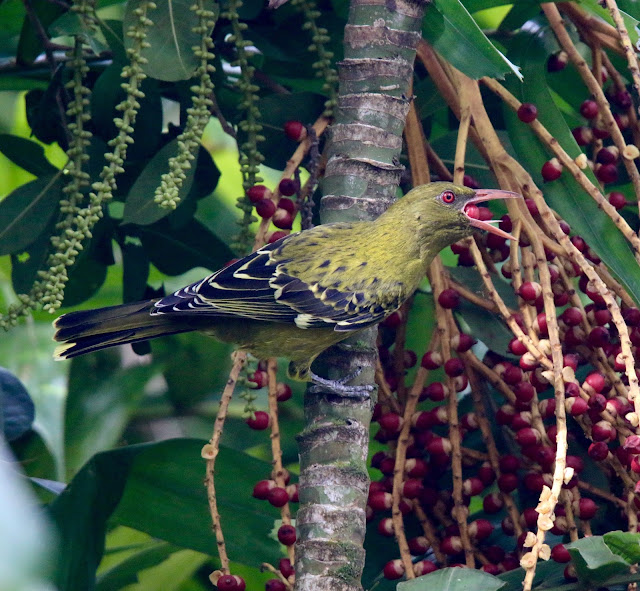 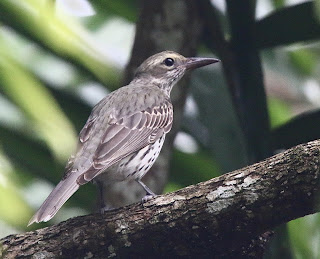 While the olive-backed oriole is happy to wait for his more brightly coloured cousin to finish before he hops in to take what fruits are left.


I received an email from Liz Downes this week and it was about a great crested grebe. Liz was on the waterfront in Cardwell and told me. "Returning from an early walk along the foreshore I was astonished to see a great-crested grebe swimming south, just a few metres off-shore. I had binoculars but really only needed them to convince myself that what I was seeing with the naked eye was real! I'm certainly not the best birder in the world but they, (the grebes) are unmistakeable in their general shape, aren't they? And that crest and dagger-like beak are dead give-aways. (I still checked the bird books just in case there were any possible lookalikes that I'd never heard of, but of course found none).

I wonder if it could be the same bird you saw on the Johnstone? The only difference is that I could not detect the brown facial markings that show up so clearly in your photo-but that may have been due to the light at the time, or possibly in the intervening couple of weeks it had lost that colour as the breeding period recedes? (Simpson and Day show it looking monochrome in the non-breeding season).  Also as it was swimming very determinedly south (and at quite a lick, despite choppy conditions) I only had a side view, so the crest just appeared as protruding from the back of the head and slightly raised. I watched until it was too distant to see properly in case it dived but it wasn't interested in diving at all, seemed to be a bird on a mission - probably wanted to get out of the windy conditions and into the calmer waters of the Hinchinbrook Passage.

We'll never know of course if it was the same bird, but it does seem possible, even likely. I've never seen one on open water like that before. A lady walking her dog saw me watching it and said, "That's a funny looking duck."  There weren't many other people about so maybe no-one else saw it. It was somewhere about half-way between the Beachcombers , motel/van park and the long Cardwell Jetty when I spotted it, round 7.30am on the 13th June."

Thank you Liz for the report on the adventurous grebe in search of a 'sea-change'. I think it is more likely it is the same grebe as it seems less likely that there would be another solitary ocean-going grebe in FNQ at the same time. I do hope all the keen birders in Ingham and Townsville keep a look out for our little sailor. If anyone has seen this bird please get in touch.

I happened to mention to Judith Tannock about the grebe and as it so happens, Judith and her husband Gilbert, were canoeing on the Johnstone the morning of May 24. They saw the great crested grebe swimming down the Johnstone River beside the mangroves and paddled over to try to identify what it was. At the same time I was running down to the end of the road to try to see it again. When Judith and Gilbert got close the grebe startled and flew off near Crocodile Rocks, upstream from me and on the other side of the River. So now I know why I could not find it again that morning.

How did the great crested grebe get to Cardwell, did it swim along the coast, or did it fly?  That is of course, if it is the same bird? As Liz said,  "We'll never know". 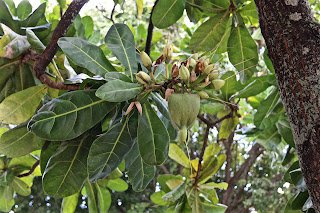 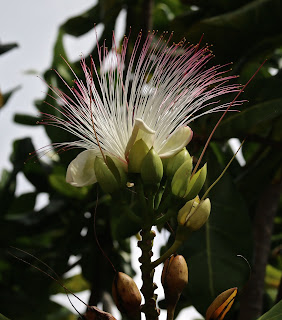 Along the foreshore of the Cassowary Coast the beautiful Barringtonia asiatica is in flower and also setting its giant seed pods which are often found washed up in the tide line on the beach. This is one of the most spectacular flowering trees of the Wet Tropics. 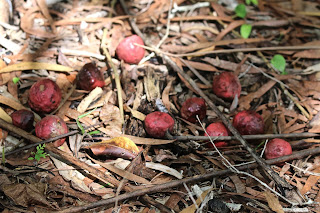 The cassowary satin-ash, Syzygium graveolens is dropping its proflic fruits to the ground around the Wet Tropics, much to the delight of the cassowaries.

In Judith and Gilbert Tannock's garden, an oasis at The Coconuts, the fruits of the blue quandong, Elaeocarpus grandis are raining down on the forest floor. Last week Judith had the little blue kingfisher visit one of the ponds in her garden and she found a blue faced honeyeater feeding in an ivory curl flower, Buckinghamia celsissima.  The blue-faced honeyeaters are found throughout the drier western areas of the Wet Tropics from Cooktown to Townsville, so it is very unusual to find one in Innisfail. Thank you Judith for this report. 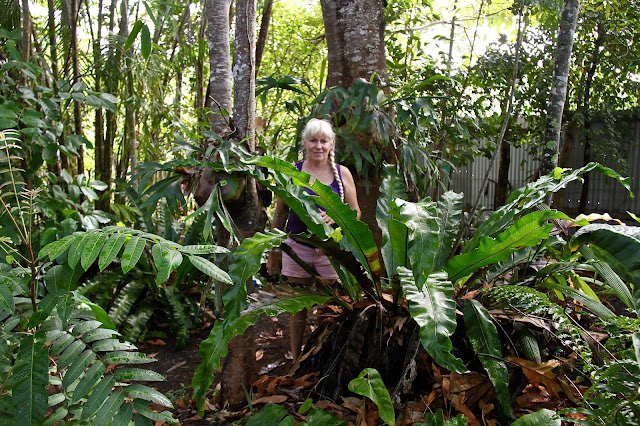 Enjoy the rain and don't forgot to watch the Matildas v Brazil SBS 3 at 2am on Monday morning.
http://matildas.footballaustralia.com.au