Hello from Coquette Point on the last day of winter, the winter that never came. However, there is a change in the air and the month of near perfect weather is coming to an end. A series of large high pressure systems, moving across the Bight next week, will bring heavy rain back to the Wet Tropics. Ah well, that is why it is the Wet Tropics. 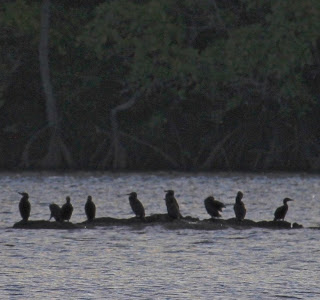 Russell phoned me this week saying he saw a flock of Little Black Cormorants fishing in the water near the mangroves at Coquette Point. Russell was on the other side at the Coconuts. I went looking for them but they disappeared. However, that night I spied them settling down on Crocodile Rocks. With high tides of just two metres at the start of this week, Crocodile Rocks remains out of the water.
By Wednesday the high tide reached 2.26m at 5.30pm. The cormorants were still camped on the rocks even though the wash from small boats splashed around them.

On Thursday morning the birds moved over to the mangroves close to Barney's Point, (my river frontage). The river was a swirling mass of activity as the birds 'darted' down through the water and emerged with fish. Their green eyes and long shimmering necks gave them the appearance of eels. 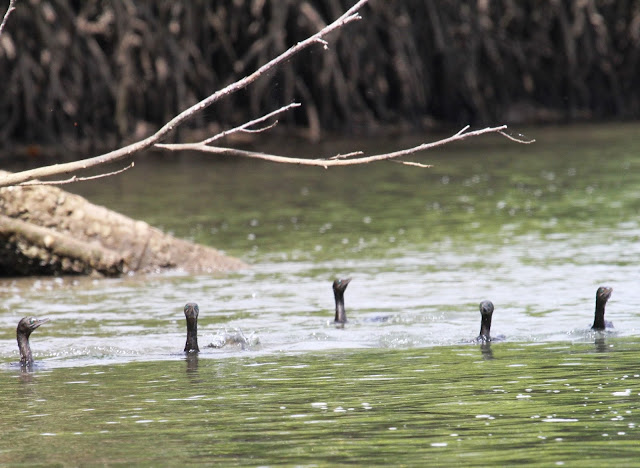 Within minutes the splashing attracted the attention of a little pied cormorant, a grey reef heron, two little egrets and a great egret. 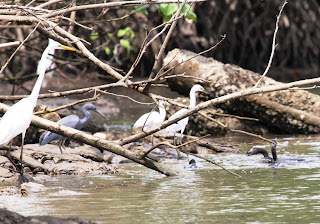 The cormorants chased the fish to the bank and the other birds took advantage and feasted on the escaping fish. 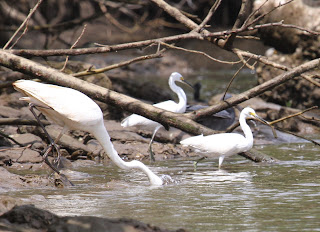 At one stage a cormorant held a captured fish in the air showing off his prowess and with one hop great egret swooped and took the fishy offering. 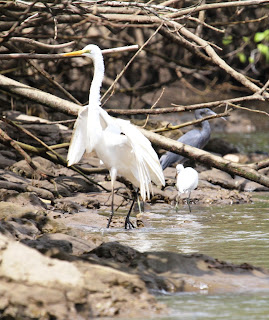 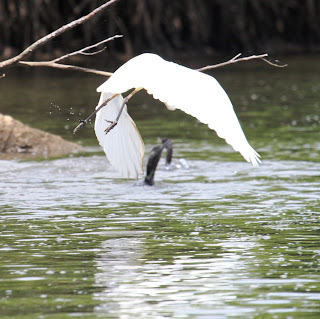 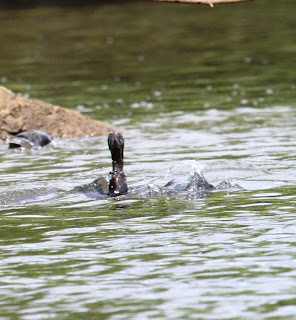 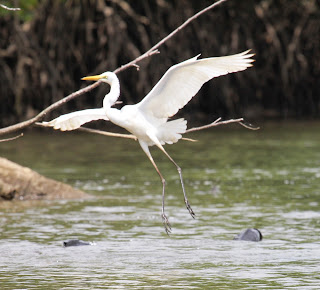 Cooperation between animals is fascinating to watch and try to understand. 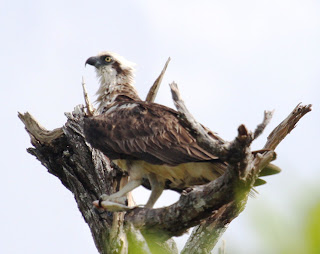 'It all came to an end when a dark shadow moved across the water. Osprey dove down into the school of escaping fish and plucked one from the river and clutching it in his claw he flew, dripping with water to a nearby dead tree to dry out. Meanwhile the cormorants, herons and egrets dispersed calling with a great amount of 'croaking' alarm. 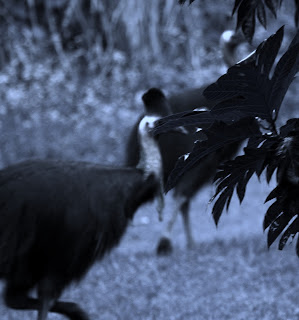 On Tuesday evening I was surprised to see matriarch Jessie and Snout walking together in the evening twilight.
On Thursday Jessie was walking by herself with no sign of Snout. Time will only tell if these two produce chicks this year. 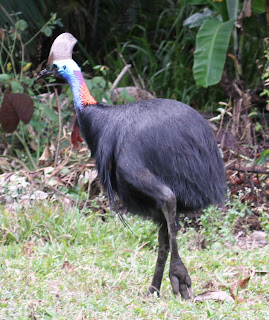 The large fruits of the Cassowary Plum Cerbera floribunda are falling amongst the leaves on the rainforest floor. This large, 30m, primary rainforest tree produces fruits of 110mm length. The cassowary can swallow the fruit in one flick of its neck. The cassowaries does not damage the seed of the fruit and the bird is, I believe, the only disperser of these large seed. 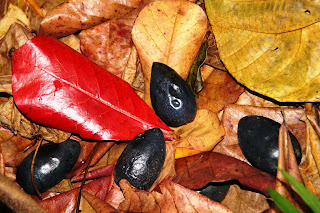 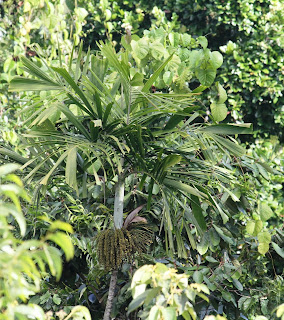 Also fruiting in the rainforest this month is the rare palm Hydriastele wendlandiana. This palm is restricted to the Wet Tropics rainforest. H. Wendlandiana is a tall slender trunked palm, often seen emerging from the canopy, suckering occurs when the palm grows in swampy ground. It is commonly called the 'water palm'. The name is from the Greek hydria, a water vessel and stele, growing tall near springs. 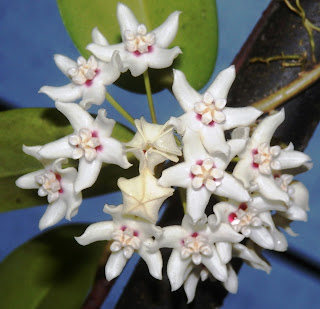 Growing on the margins of the rainforest and in mangrove swamps the vine Hoya australis is in flower. The clusters of waxy flowers are strongly perfumed and the flower petals are pearly white and the flowers exude abundant nectar to the delight of native bees and small rainforest insects. 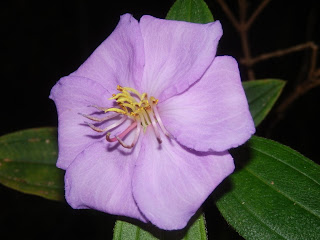 On the edge of the rainforest and along watercourses the native lasiandra Melastoma malabathricum is in flower. The satin lavender flowers when pollinated produce a succulent fruit with black pulp. The common name 'black mouth'. The fruits are a favourite of cassowaries and are delicious when roasted, they are good to bake on pie tops or to add to jam or chutney before cooking. 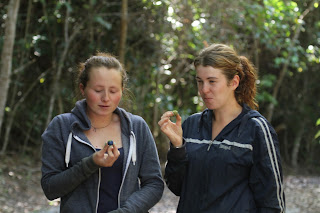 The rainforest is full of beautiful flowers and fruits but not everyone enjoys the flavours. I took my new visitors Ellie Basterfield and Brid Mac Elhinney on a bush tucker taste walk and the girls were not impressed with the taste of the Quandongs, but they gave them a try!! 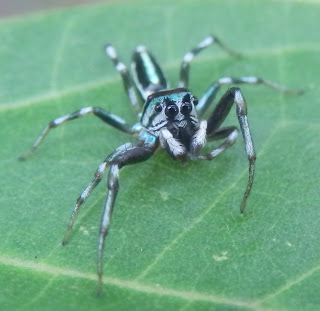 When this metallic-blue jumping spider jumped on Ellie's leg I squealed in delight to see it and Ellie panicked when I said don't move there is a special spider on you! It was all I could do to rescue the little creature as Ellie couldn't see it and mistook my excitement for alarm. In the end no harm came to spider and I even managed a photo before he jumped back into the forest. 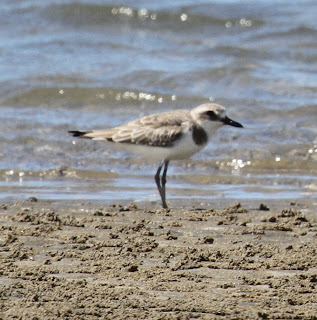 The migratory shorebirds are starting to return to Australia. These little birds have flown thousands of kilometres to Alaska and Siberia they arrive on our shores hungry and exhausted the last thing they need is to be chased by a dog, trail-bikes or quads.
Cheers for this week and I hope you get a chance to go down to the beach and welcome the migratory birds back to our beaches. 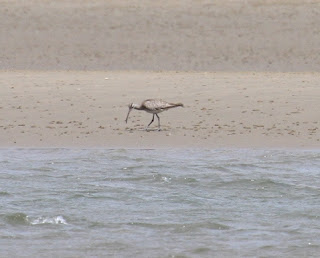 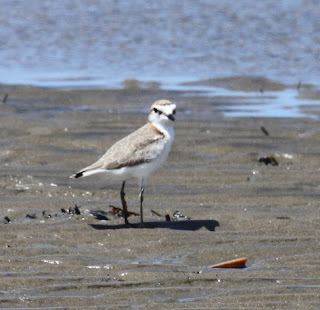 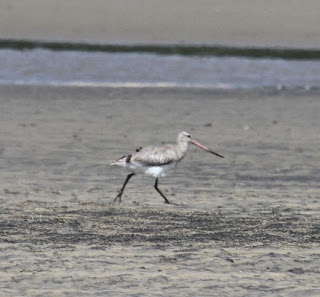 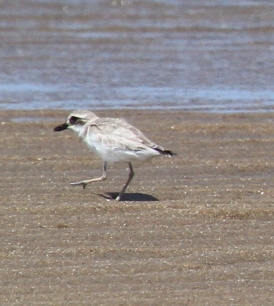 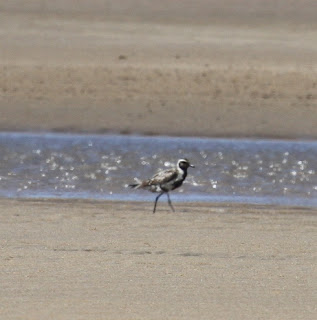