A large high in the Bight has brought strong winds and rain to the tropical coast all week. At times wind gusts have reached 50k. Last night we received 20mm of rain in a couple of sharp squalls.

Trees weakened by cyclone 'Yasi' are falling in the strong winds and one very large tree fell across my top road blocking access until I cleared it. 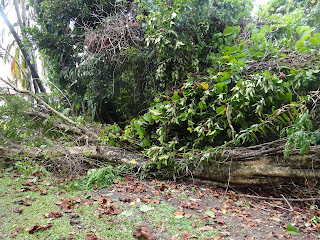 A rainbow broke through the clouds yesterday and I had hoped the weather would ease today
however, the rain has set in again - contrary to forecast. 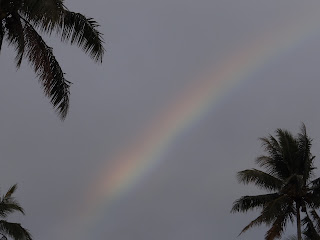 A flight of flying ants two weeks ago was a good indication that rain was on its way. This week I was told of two tortoise laying eggs higher than ever seen before. One report was from Etty Bay the other from South Johnstone. This is generally a sign that we are in for a big 'old fasion' wet season with a few good floods: time will tell.
Green ants have been very active this week laying down stores of food - another indicator that a big wet season is likely. 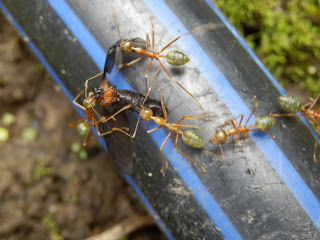 At least all the people at Coquette Point who rely on rainwater tanks will not have to worry about their water supply this 'dry season'.
Pandanus fruit are ripe and falling again and the cassowary scats are full of these fruits. 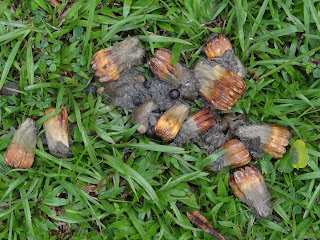 Once or twice a day I see the cassowaries going into the swamp to eat the fallen pandanus fruit. Sometimes Snout joins Jessie, she tolerates his presence and when they are finished eating they go their separate ways. You can see the heavy rain falling as I took the photo below. 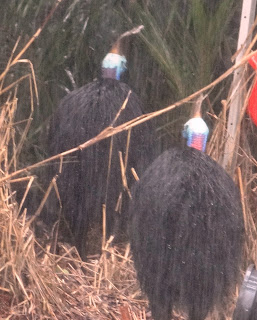 Dot is spending a lot of time on the proposed development property 27V and I see her often wandering through the mangrove forest boundary of this property. 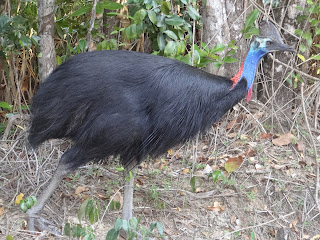 Matriarch cassowary 'Flat Top' dashed across the road in front of me as I was on my way home from town this week. I managed to get a quick photo before she disappeared into the rainforest. 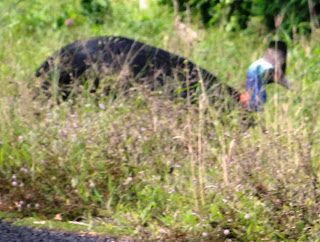 I have not seen 'Little Dad' or the chicks for several weeks, nor have I seen the new chick as yet. However, a report from Diana O states that they are all doing well and the chicks are growing strong
and still with strong-coloured stripes.
Spotted Cat Bird arrived two weeks ago and every morning, long before the sun lifts the shadows from the trees, cat bird calls out and displays high up on a branch in the rainforest canopy.
These birds are very difficult to photograph as they seldom come out into the open however, I
managed to get some photos this week. 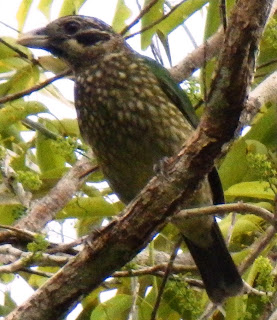 Male non-breeding colours.
On one occasion when I was following the cat bird's loud calls I saw the female Indian Koel in the flame tree. She was eating the nutty yellow seeds which had ripened in the warm weather. The cat birds moved close to her and she swooped on them, chasing them from the tree. Later that day I saw
her chase fig birds and metallic starlings. 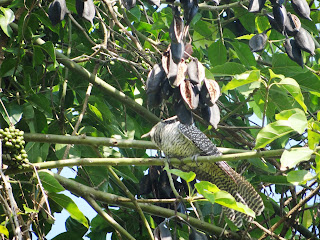 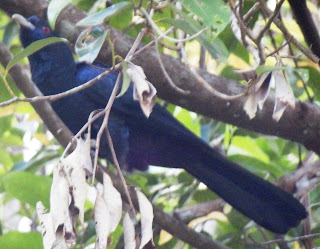 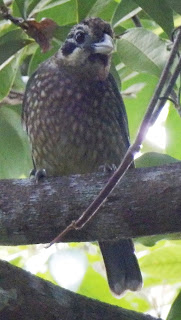 The metallic starlings and the female fig-birds are busy collecting twigs for nest repair and new buildings. They fly into trees, preferable with old liana, and saw through the vines until they have cut the required length of twig. Holding the twig firmly in their beak they fly to their nest. Flocks of birds come and go all day long in noisy excitement.

Potter wasp continued her high rise building and built four new chambers this week. Each time she carefully cleaned away the moss and debris on the tree before starting the construction of a new chamber. 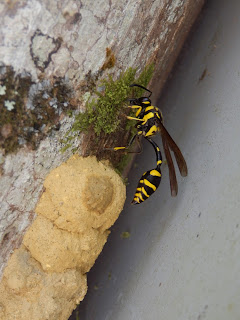 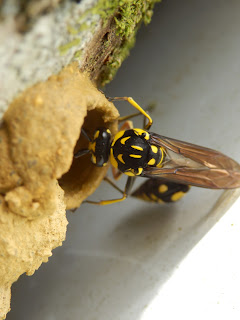 The new nest chamber is carefully moulded.
The egg is laid 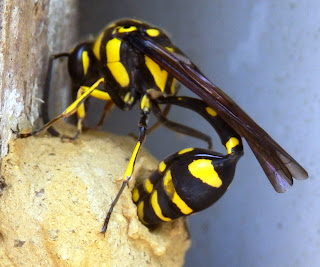 A caterpillar is placed in the chamber to feed the larva when it emerges from the egg. 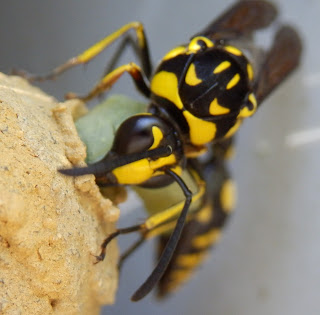 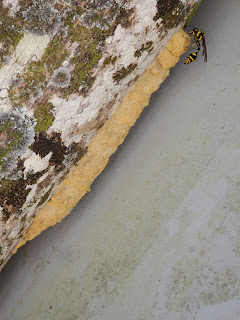 The final egg-chamber is capped and two layers of clay are applied by potter wasp to seal the 14 chambered nest. 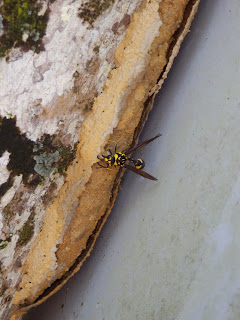 Then a thermal layer of clay is applied to protect the nest and keep it cool. This layer is constructed one millimetre out from the nest and gradually built up. Construction is carried out alternately from one side then the other. Potter wasp worked all day on Friday collecting clay. On her journey to collect the clay she firstly visited a bromeliad containing water. From the flower's bowl she took in water which she mixed with the clay to form the small ball of plaster. 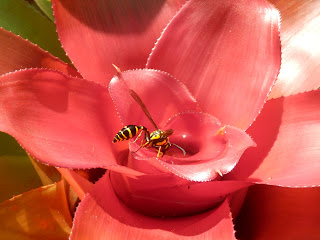 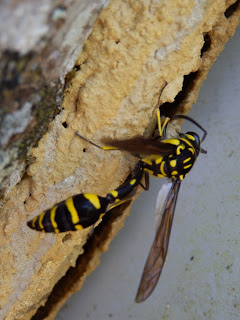 Potter wasp joins the two sides of the thermal layer. 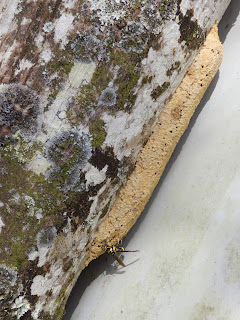 All day Friday potter wasp worked to construct the thermal layer. She had completed it by 5.30pm when I noticed her chasing another smaller wasp. Shortly after she left the site the intruder wasp landed on the nest. 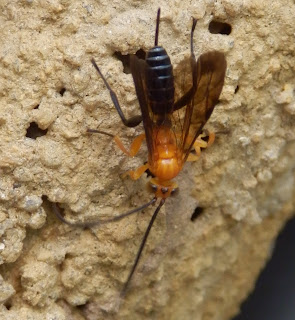 It was a small parasitic wasp and it was inserting its antenna into small holes in the thermal layer. 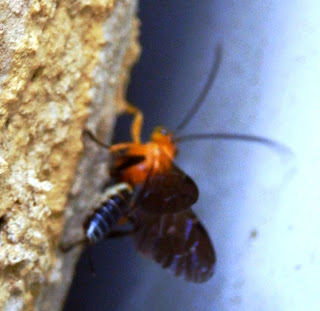 It was getting late and starting to rain when I saw the parasitic wasp insert its ovipositor into a hole to deposit eggs in potter wasps nest.
As the rain started to fall heavily I went upstairs. Last night heavy rain fell through the night and first thing this morning I looked to see how potter wasp's nest had survived. The thermal coating had not had time to dry and half of it lay in a muddy mass in the foliage at the base of the palm. 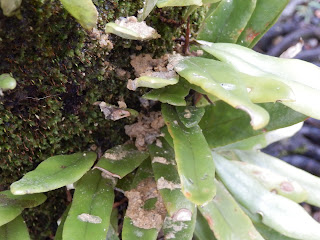 When potter wasp arrived to inspect her nest at 7am she walked up and down for some ten minutes examining the damage. With light rain still falling she commenced the reconstruction and worked on it all day in spite of the heavy rain at times. 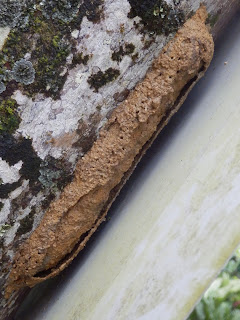 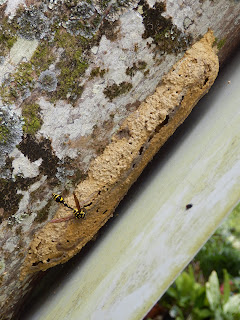 Hopefully the weather will be kind to potter wasp and this time allow the clay mould, of her nest, time to dry.
I saw another amazing insect this week, a robber fly. 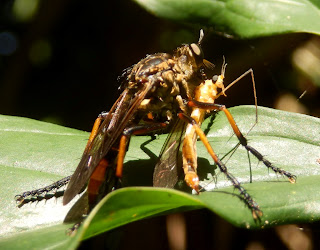 As I watched, it literally sprang into the air and then down and landed and grasped another fly. The robber fly sunk it proboscis into the victim and I watched as he held her tightly and she turned her head and looked pathetically at me. Eventually he released his victim and he flew away. Amazingly the victim also flew away. Perhaps robber fly should be called vampire fly.
Robber flies mate end to end like crane flies.  There have been lots of crane flies flying around and mating over the last few weeks. 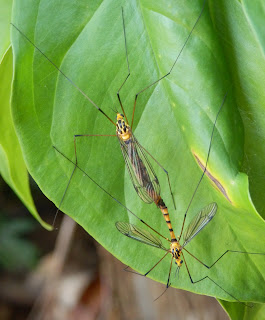 The rainforest of the Wet Tropics is truly an amazing place.
cheers for now Yvonne.
Posted by Unknown at 03:16