On the 9 December 1988 the Australian Government nominated the Wet Tropics Rainforests of north Queensland for World Heritage listing it will be twenty-five years ago on Monday; happy birthday Wet Tropics.

Over a decade of activism by conservation groups and passionate campaigning by scientists like Dr Len Webb slowly led locals and tourist groups to realise the rain forests of north Queensland were special and that they should not be cleared and logged but preserved for their intrinsic value; and incidentally they were valuable for tourism. 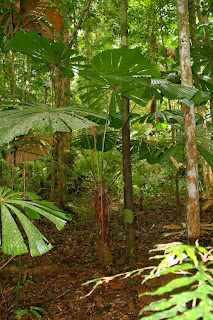 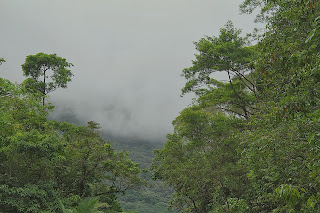 Eventually the politicians got the message and the rain forests of north Queensland were granted  World Heritage status.

The World Heritage listing
has secured a living, vibrant legacy for future generations and ensures that this ancient and irreplaceable landscape is treasured and celebrated by all. The Wet Tropics World Heritage Area offers an outstanding opportunity to enrich the lives of people everywhere through scientific research and tourism.
The outstanding universal values of the Wet Tropics, which we appreciate today, is also the ancient homeland of the many tribes of rainforest Aboriginal people and there are six languages spoken by 18 rainforest Aboriginal tribal groups, currently over 20,000 people, who are deeply connected to these ancient lands and waters, live within the Wet Tropics region. 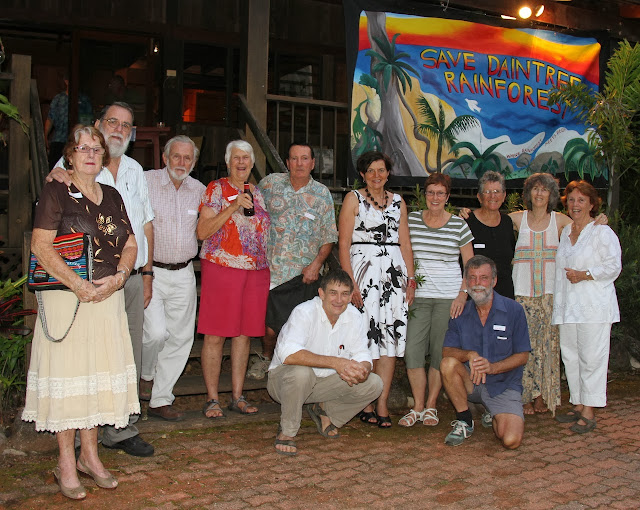 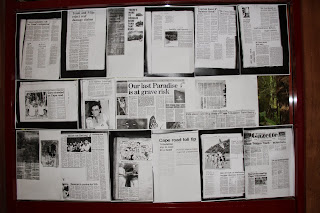 Of all the campaigns leading up to the listing of the Wet Tropics nothing received more attention than the Daintree Bolckade. 30 years ago when the Queensland Government decided to push a road through the Daintree Rainforest  a group of concerned local people organised a blockade at Cape Tribulation.  I went back to the Daintree last weekend to celebrate the 30th anniversary of the blockade.Over fifty of us old blockaders got together to reminisce and celebrate with tales of arrests and exploits.  Pat Shears and Dawn Grey spent weeks on a magnificent display of  newspaper cuttings of the time and story boards of the history of the Blockade.


The hundreds of newspaper clippings told of the huge support the blockade received from around the world as well as the bloody intransigent mindset of the Bjelke-Petersen Country/National Party Government of the day. 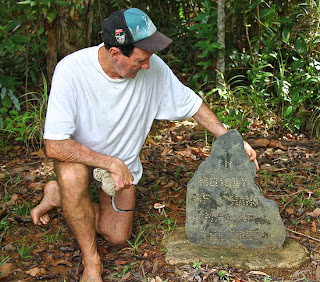 We paid tribute to blockaders and supporters who were no longer with us, in particular Hans Neiuwenhuis and Arthur Thoresborne. I went to a plaque erected in memory of Hans which Pat S. made. Hans allowed the blockaders to live at his place which ended up with him losing his job. Hans had been the National Park Ranger at Cape Tribliuation at the time of the blockade. Hans was also served with a writ by the local Council for allowing people called 'illegal campers' to stay on his property. Without Hans the blockade would not have been possible and Hans made a personal sacrifice far greater than any of the other blockaders. We loved you Hans.

Many famous people spoke out in support of the rainforest including Cliff Richards the singer and David Bellamy, botanist and BBC broadcaster. In the end the Blockade itself became a tourist attraction and centred world wide attention on Queensland's rainforest. The publicity for Queensland tourism was worth millions of dollars. 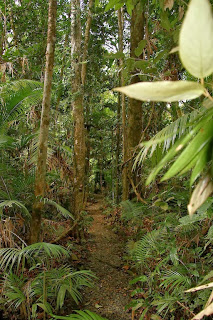 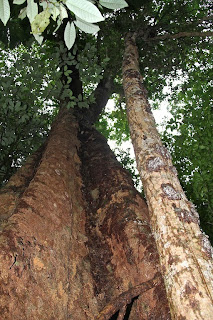 I took these photos in the World Heritage Daintree Rainforest. 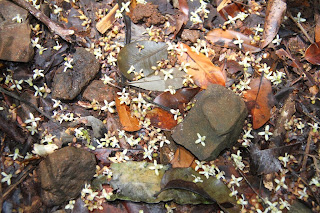 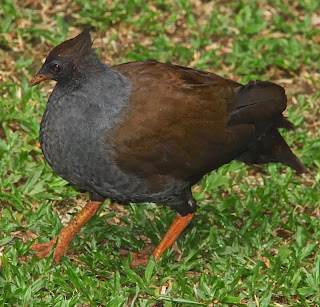 The orange-footed scrub fowls are very active at the moment, tending to their mounds and calling all through the night. For a little bird it makes a big noise.

I walked in a one kilometre line in the Daintree rainforest and counted 11 cassowary scats and one sub-adult cassowary. 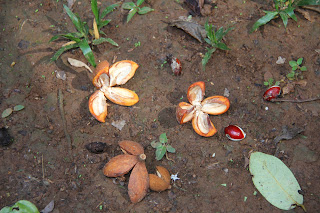 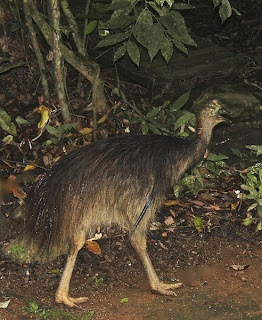 The Cassowary population in the Daintree is growing and there is much debate about this success story. Cliff Truelove, who was Rainforest Protecter through the sixties and seventies said they never saw a cassowary in the early days. Now sightings are frequent and new chicks are seen every year. 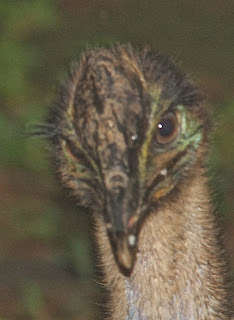 It seems counterintuitive as now with increased traffic, a sealed road, so the cars go faster, more people which also means more dogs and all these conditions posing a threat to the cassowary. The only factor that has changed in favour of the cassowary is that there is now good control of feral pigs and sightings of pigs are now rare where before they were common.

Another curious factor could also be influencing the sudden success of cassowary breeding. The locals have noticed the female cassowaries are staying with the male and assist in rearing the chicks. Two parents, no doubt, would alter the equation and give the chicks a better chance of survival.

I have observed at Coquette Point that following a cyclone the matriarch cassowary will stay with the male when the chicks hatch. This appears to be a strategy induced by stressful circumstances. 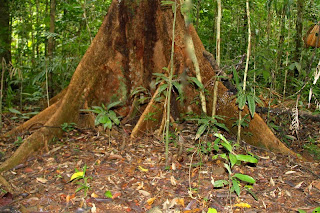 The large contorted buttress roots of many of the Wet Tropics's trees are believed to help the tree consolidate its hold on the earth and are perhaps an evolutenary adaptation to frequent cyclones.

Everywhere you look in the rainforest epiphytes cover trees and rocks many of them regarded as rare ferns in horticulture. 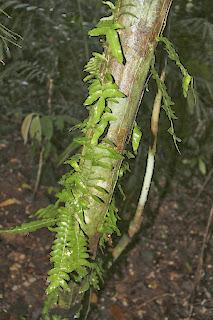 Giant vines twist and turn as they journey to reach the light of the forest canopy. When the wind loosens their hold they fall and form giant circles between the trees. 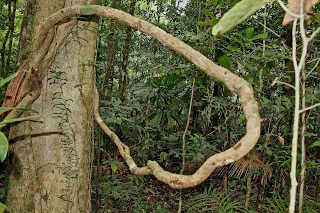 On the forest floor fungi thrive in the damp leaf litter. Some delicate like porcelain. 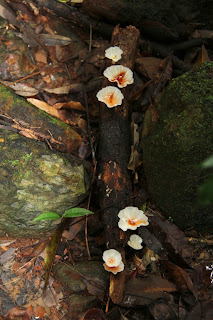 Others, more robust like this group of brown mushrooms which had a distinct sweet, fresh smell with thick,white flesh but I was not courageous enough to taste it. Mushrooms were  an important part of rainforest Aboriginal people's diet, unfortunately much of this knowledge has been lost. 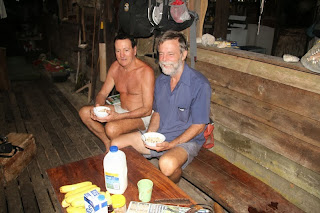 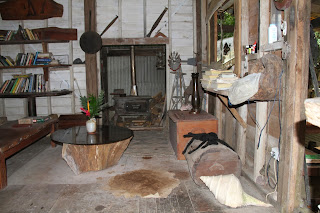 I stayed with Pat Shears while I was in the Daintree and Cliff Truelove who is now living in Cairns also turned up. Between the three of us we solved most of the problems of the world, it all seemed so simple deep in the rainforest!!!


Pat's home is a love affair with timber and when you enter you step back one hundred years to a much simpler life.

No mobile phone, no computer connection, no windows, no doors, no electrical gadgets, no television; a simple life immersed in the rainforest with, of course, the ABC. 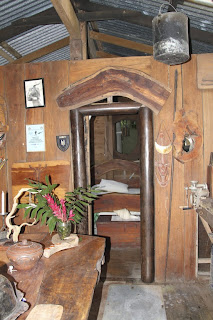 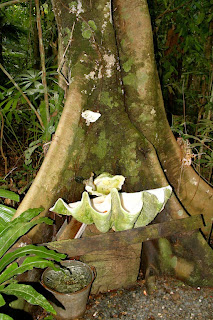 The bathroom sits between the flanges of a giant spurwood tree with vines as towel rails.

The hand basin a clam shell and no mirrors.


There is always time for a 'Nanny Nap'. 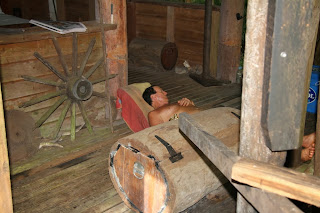 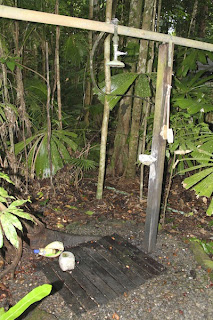 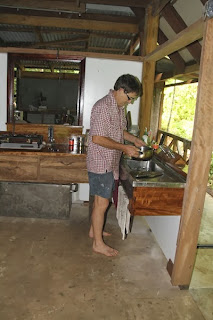 On my way home I accepted an invitation to breakfast with Mike Berwick. Mike is rebuilding his old home and discovering again his love of woodwork.

Mike and I had frank discussions about a wide range of issues from
feral pigs, revegetation, sand mining and the cost of environmental programmes. 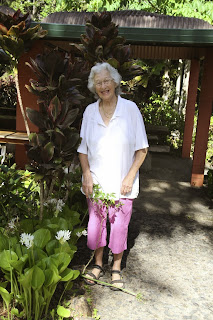 I also called in to see Betty Hinton, her husband Bill died in July following a long illness. Bill and Betty created Floraville at Cow Bay and it has become a major tourist attraction. However, without Bill it is too much for Betty and she has Floraville up for sale. It was so lovely to catch up with Betty and I can't wait to see the fulfilment of her new plans when  she returns to botanical painting. All the very best for your future Betty and Bill's amazing photography of the rainforest landscape is his legacy. 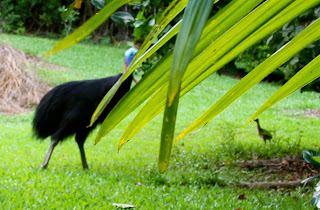 I returned home to Coquette Point to a wonderful surprise, cassowary 'Snout' turned up with one baby chick.

'Snout' was quite agitated so I backed off. Unfortunately, 'Snout' has not returned and no one else has sighted him or the chick. There is plenty of fruit around so I hope we will see him and the chick again soon. 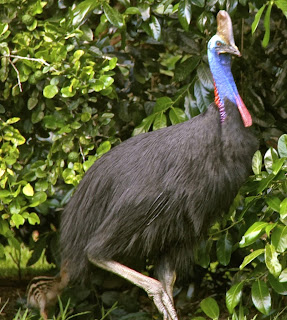 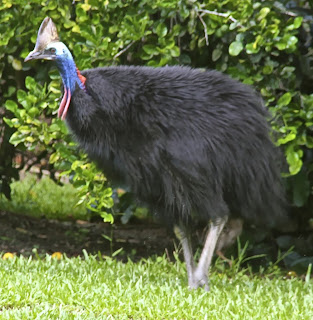