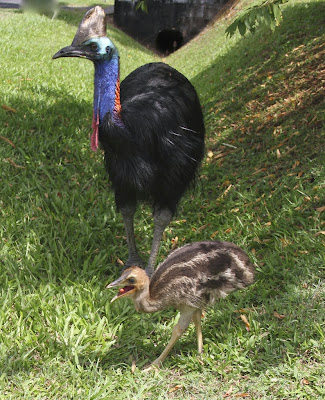 The Coquette Point Cassowaries are out of the rainforest and looking for food. Cassowary    'Dad 1', the oldest male Cassowary at Coquette Point, about 30 years, has one chick this year and has been seen regularly by Coquette Point residents, this week, searching for food in the mangroves where pandanus and the exotic pond apple are fruiting. 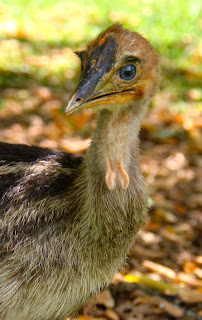 'Dad 1' has a particularly distinctive wattle and is a good carer with one or two of his chicks reaching adulthood every two years or so.

It would be nice to give this bird a name that better describes his unusual wattle and his place, as the senior male, in the Cassowary community of Coquette Point. Please send in your suggestions. 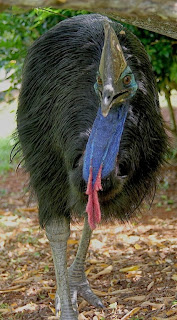 The new chick is very cute and curious and one wonders what will be his future?

At Friday's Council of Australian Governments meeting the Abbott Government struck deals with all State Governments to divest itself of approvals powers for environmental assessments of development project, when triggers such as impacts on threatened species or landscapes may need to be considered. 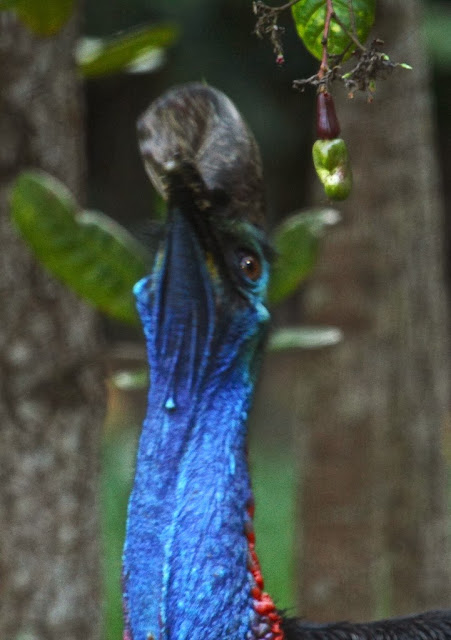 Previously
under the Environment Protection and Biodiversity Conservation Act the Federal Government had oversight powers to ensure that places of special biodiversity or threatened species were protected.


The Prime Minister, Tony Abbott, has sold his policy with a one liner, 'One Stop Shop with no Green Tape'. Few people have looked  behind the one liner and thought about the impact this policy will have on the survival of endangered and threatened species or of consequences for the aesthetics of our foreshores, waterways, National Parks and the Great Barrier Reef Marine Park.  The 'devil is in the detail' and the outcome will be development with no regard for the value of the exceptional landscapes or for endangered species. What will we lose?

The matriarch cassowary 'Jessie' has been visiting the cashew tree on her way to the mangroves every day. She stretches up to examine the cashews for ripeness. When she finds a ripe fruit she plucks it, then tosses and swallows it whole. The huge lump of fruit slowing moving down her throat. 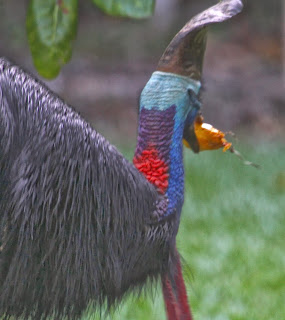 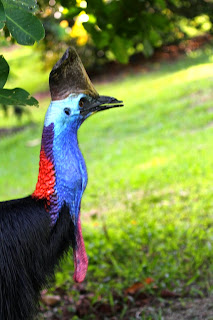 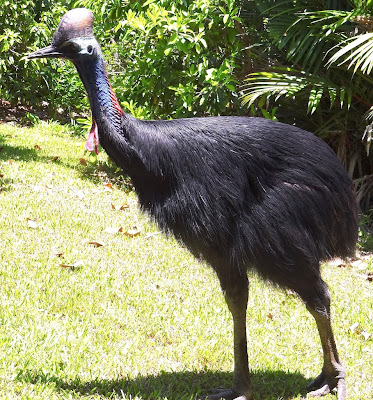 Young cassowary 'Stumpy' visited the wax jambu, Syzygium aqueum, tree this week.
'Stumpy' is a chick from 'Dad 1' 2010 and has a sibling chick unnamed as yet. 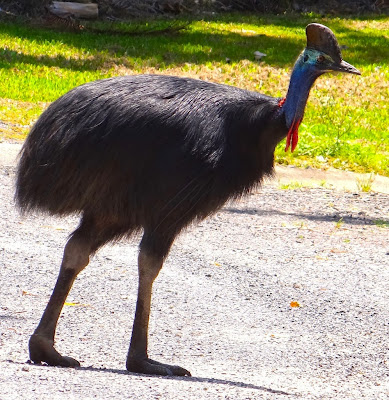 'Q' also turned up, I heard her walking through the mangroves and when she came out she was in a big hurry heading for the rainforest her long legs covered in mud.

It is good to see these young cassowaries thriving.

I have not seen 'Snout' and his new chick this week, however Ruth reported a sighting from the top of the Range which I believe from the description could be them. 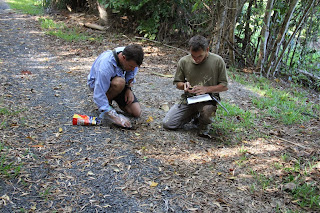 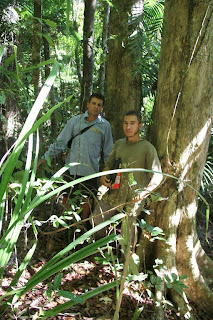 Dean Jones, a research officer with CSIRO turned up this week to collect cassowary scats. He and his German student are collecting cassowary scats to analyse for DNA. They hope to get an idea of cassowary populations in the Wet Tropics. We walked into the Moresby Range National park but could not find any scats. We found very little fruit on the forest floor. We did find some scats on the road. 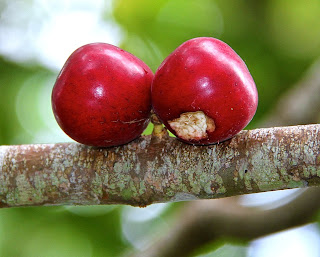 In the rainforest Phaleria clerodendron, the scented Daphne is in fruit. 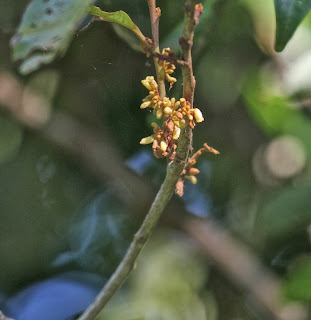 The native nutmeg, Myristica insipid is in heavy flower. 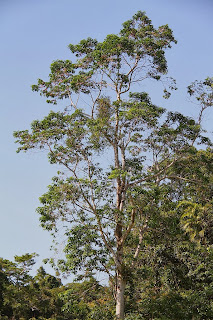 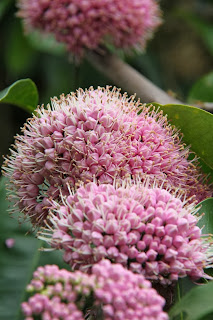 The spectacular pink flowers of the Butterfly Tree, Melicope elleryana are in full bloom. The colour of the flowers vary from light pink to almost red on some trees. This tree is the host plant of the Ulysses butterfly. 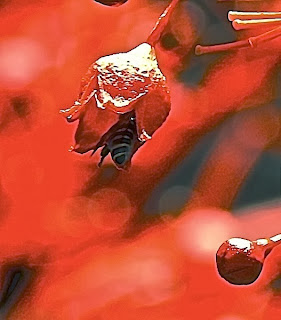 The bright red flowers of the flame tree, Brachychiton acerifolius are full of nectar and a buzz with bees. 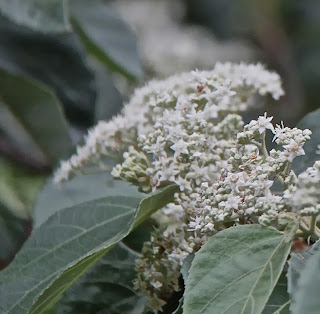 The sarsaparilla tree, Alphitonia petite's branches are laden with snow white blooms and are also a-buzz with insects.

The rain forests are adorned with summer blossom. 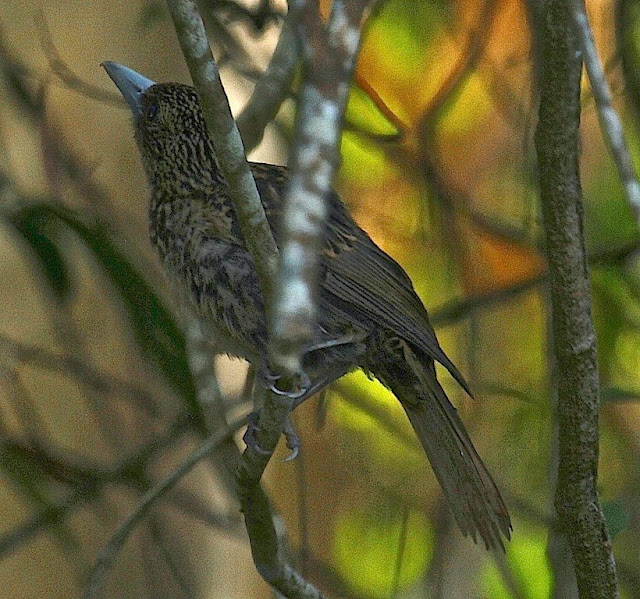 Butcher bird's chick fledged this week and was so clumsy with his first flight. Mum and Dad accompanied the young bird as he flew into the melaleuca swamp. When he landed on his first branch he almost fell off until he steady himself and clasped the branch tightly. His dappled feathers are a remarkable colour and they contrast with his blue beak. 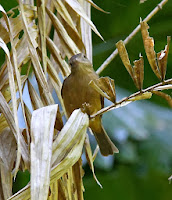 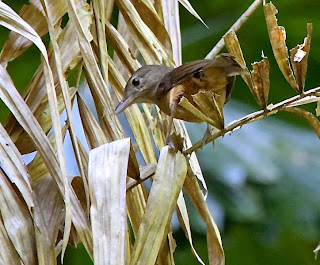 Rufous shrike thrush is busy building a new nests. This little bird was pulling dead lawyer cane leaves with all her might and taking them into the forest to build a nest.

Although this bird is know as the alarm bird of the forest on this occasion she was so busy with her task that she paid no attention to me. Unfortunately I did not have the long lens with me, luckily I was close enough to get these photos.

Pied Imperial pigeons have entered another breeding cycle and six birds now serenade the sunrise in six -part harmony.   These PIPs' are leaving earlier and returning later than they were last month. 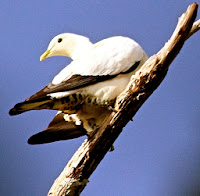 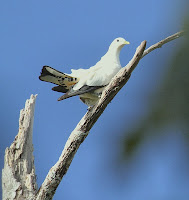 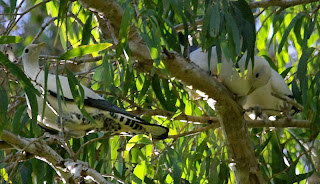 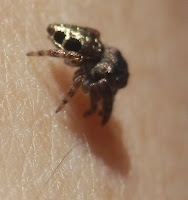 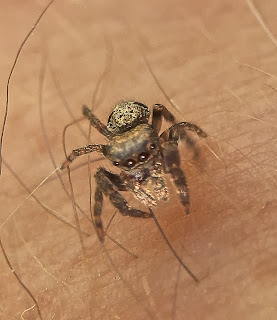 This week I found yet another species of jumping spider at Coquette Point. I believe this little, 1.5 mm, fella is Simaethula auratus. He literally glowed when he entered the sun's rays, even his palps glowed like fire sticks. Imagine how frightening he would be in attack, although in the shadows he was dull brown. 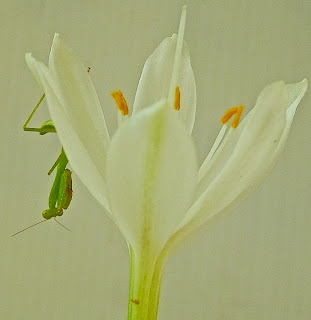 The beautiful Cardwell lily, Proiphys amboinensis is in flower and I found this praying mantis hanging upside down, trying to hide from the sight of any insect coming to feed on the fresh pollen. Although I did not see the mantis capture an insect he hung around on the flowers all week.

The Cardwell lily always flowers at Christmas time and is also know as the Christmas lily.

School holidays started yesterday so look out for wandering youths.